Picking a gaming mouse can be as tricky as picking a chair. Because you’re going to spend a lot of time in physical contact with the device. Seemingly small issues become inflated when your hand will persistently encounter those issues, and finding something that fits you perfectly can be challenging. To make matters more challenging, when a new feature comes out, trying it adds another variable to selection.

The Cooler Master MM710 52G Gaming Mouse is being called the lightest gaming mouse on the market. And if you ignore those teeny tiny pocket mice, then it is. Depending on what kinds of games you’re playing, lighter mice can absolutely be the way to go. When you’re trying to make quick snapping motions with your hand, it doesn’t help if your arm has to pull around weight with it. 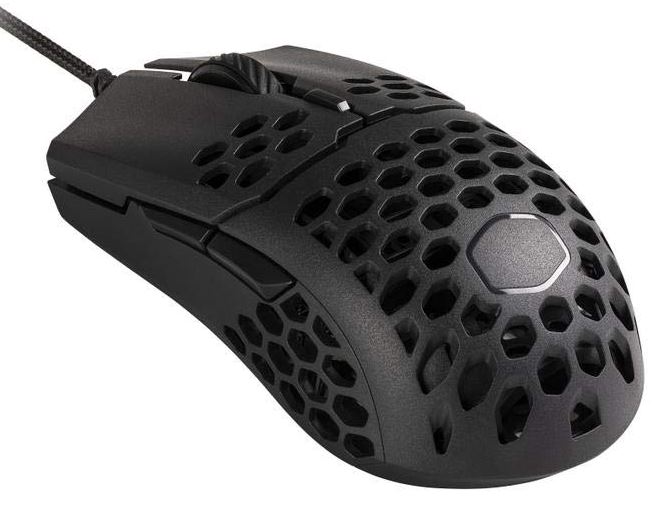 But getting this mouse to become so light didn’t come without some sacrifices. Those sacrifices are mostly in relation to ease of use. But they also help ensure that the MM710 has a slight preference towards people who use a claw grip as opposed to a palm grip. So how does the MM710 perform in day to day circumstances?

Most people don’t have large hands, and those with small hands outnumber those with large hands. One consequence is when brand like Cooler Master rolls out a new flagship mouse, they usually build it to be used by people who have small-to-average sized hands. But you’ll notice that people with large hands are not accounted for in any of this.

That’s true here as well. Because the MM710 was made to be as lightweight as possible, they’ve given it a body size that’s slightly smaller than average. It’s intended to be accessible to people who have small hands and average sized hands, but is a little less accessible to people with larger 20cm hands. 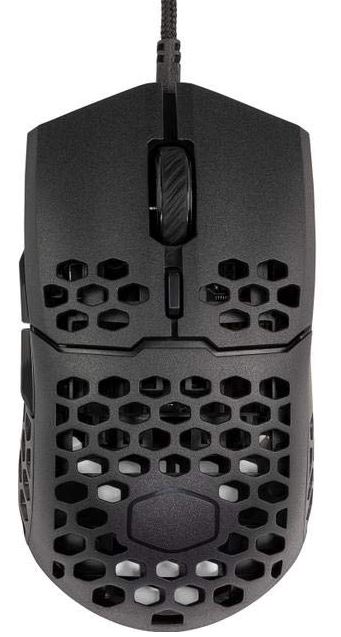 That’s not to say you can’t enjoy this mouse if you’ve got large hands, only that you need to slightly lower your expectations in relation to ergonomics. But frankly, that’s something people with large hands should be used to doing. Many people won’t even notice the small difference in size, which only amounts to a couple of millimeters.

Part of the reason why the Cooler Master MM710 is so lightweight is the result of using a honeycomb chassis, reducing the amount of physical material needed to support the mouse. On the topside, the honeycomb looks pretty nice, probably in part because of the curvature of the mouse. On the bottom there’s more honeycombing, though since that surface of the mouse is flat, it doesn’t look nearly as cool.

Beyond that, it’s worth noting the shape of the mouse is ambidextrous. But technically you’d really only want to use this mouse if you were right handed because the thumb buttons are placed on the left side of the mouse. Flipping to the bottom side, there’s not much that needs to be noticed. The feet of the mouse are made with PTFE, for a smoother low friction glide across your mousepad. You’ll also notice the honeycombing occurs on the bottom as well as the top, which brings us to style.

Notably, the cable running between the mouse and your PC is braided in woven nylon. That’s a little unexpected because the cord is supposed to be as lightweight as possible, so you might think that the designers would start skimping on the shielding. But they didn’t.

The cable is still ultralight to help reduce the amount of force needed to pull the cable. The fact you’ve got a cable attached is a little regrettable, but putting a battery onboard would only weigh down the mouse with another 20 grams or so. Which really means that wired mice will always be lighter than wireless ones, and that reducing cable drag is really what’s necessary to push lightweight designs even further. 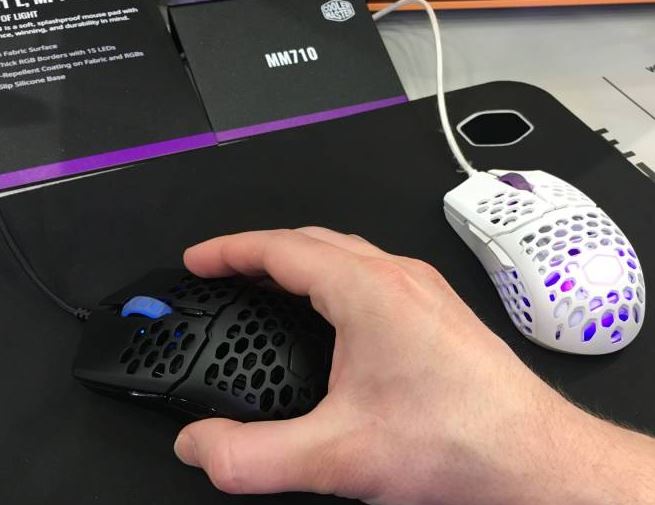 The switches are actually pretty ordinary for a gaming mouse. They’re Omron switches on both the right and left click, as well as inside the thumb buttons. Those switches are supposed to last for around 20 million clicks without developing the double-click issue that’s so common among Logitech’s mice.

Inside the chassis, you’ll find a Pixart 3389 optical sensor, which is capable of reading an amazingly high 16,000 DPI. That’s a grossly powerful sensor that frankly is far more than any gamer will ever need. It’s interesting to see so much power packed into such a small and light mouse. But those aren’t what make this mouse special, almost any gaming mouse will be able to provide comparable switches and a comparable optical sensor.

What really gives this mouse its own unique performance capacity is the fact it’s so light. For people who need high-speed twitch responses, like those who are playing a first person shooter game, that can make a big difference in comfort and efficacy. Conversely, not everybody needs mice that are so floaty. If you’re playing a slower paced point-and-click game, then a lightweight mouse might not mean as much to you.

When it comes to gaming mice, there are really only two or three criteria that gamers actually care about. Surprisingly, things like DPI are not usually at the top of the list. Because basically any gaming mouse is going to be able to provide you with a gaming grade sensor. There are some minor differences between using a laser sensor and an optical sensor, but unless you’re trying to play on a reflective or translucent surface, you typically don’t have to think twice about that.

One of the most important criteria is actually feel. How does the mouse feel in your hands? That’s actually pretty tricky to get right because if you hadn’t noticed, people’s hands are of different sizes. Some people have long fingers, others have wide palms. Some people have smaller hands.

On top of that, there are big differences in the way that people end up gripping their mice. When you use a palm grip, with your hand planted firmly against the mouse, you’re typically better off with a larger mouse, and size can be more important to ending up with comfort. But if you play with more of a claw grip, then what matters more is the shape of the mouse. 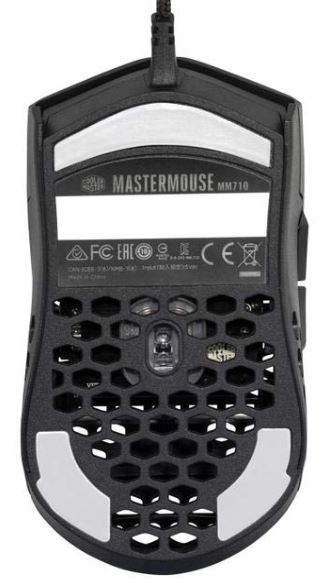 In either case, weight can be a critical factor. But it’s especially important for people who are using a claw grip, which tends to be the most common grip for playing PC games. Because when you’re primarily pulling the mouse around with the strength of your fingers, you can really appreciate seemingly small differences in weight. That’s also very true for longer play sessions, where the weight has a longer time to impact you.

That’s why a lot of gaming mice allow you to shove extra weight inside your mouse, or to remove them to your liking. Shoving a ton of weights into your mouse gives it a nice hefty feel, and a sense of high quality. But when it comes to raw performance, lighter mice like the MM710 52G Gaming Mouse tend to win the day.

There are always people who won’t feel a mouse is complete without LEDs. Cooler Master seems to understand that — so there’s also an RGB version of the MM710. It adds another 5-grams to the total weight, bringing it up to 57g. In other words, that’s about two ounces, or around the weight of ten sheets of printer paper. But even with the extra weight, it’s still much smaller and lighter than basically everything else on the market, except the non-RBG version. 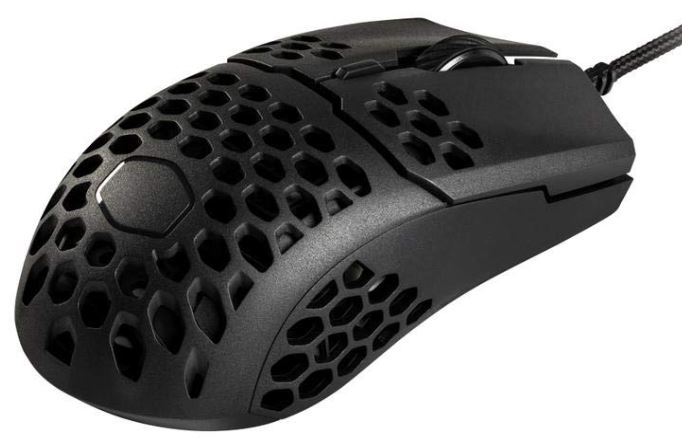 There are downsides to the honeycomb design. One big downside is that you’re basically opening the mouse to attacks by water. How often do people spill water on their mouse? Not that often. And even if you did, it wouldn’t necessarily mean a dead mouse. But that possibility would be on the table. And what if you’d spilled something sugary inside? Cleaning it could be a nightmare.

Actually, cleaning in general is going to be a small issue. As a gamer, you’ve probably noticed that after a couple of weeks of playing, your mouse can start to accumulate chunks of dead skin and grime. That’s something that happens to basically any object that comes into constant contact with human hands. For people with a palm grip, that’s going to make cleaning this mouse a little tedious due to the honeycomb structure. Which really emphasizes what should already be clear – this mouse can handle a palm grip but is really designed for the more grips used more commonly by FPS players.

Who Should Choose the Cooler Master MM710 52G Gaming Mouse?

With respect to the hardware, the Cooler Master MM710 is everything that a gamer may need from a mouse. With a couple of exceptions, most of which should be self-apparent. For instance, this mouse doesn’t have 30 macro buttons pushed onto one side. And in some really high end gaming mice, you’ll find some features that aren’t available here. For instance, you can’t swap between several types of sensors.

But the MM710 has several distinct advantages, and several distinct disadvantages. For the pros, this mouse is incredibly lightweight. That’s going to be hugely advantageous for people who need snap-action in their mouse, like those who play FPS games. Conversely, people who are playing slower paced point and click games, like MMORPGs, will not easily appreciate the weight difference.

For cons, this mouse can be a little tiring to clean, and it can be a little vulnerable to water. But that’s pretty much it. If you can bring yourself to occasionally wipe it down and maybe break out some Q-tips, then you’re probably going to be able to appreciate the MM710. It looks cool, it’s effective, and it’s got an incredibly reasonable price for a gaming mouse.

What’s the Difference Between Megabits and Megabytes?
November 10, 2020