TechGuru May 6, 2018 Computers, Storage No Comments

With each new generation of motherboards, one thing has become clear: The M.2 form factor is here to stay. And for people who are looking to achieve drive speeds that you can’t get with the comparably slow SATA connections, that’s excellent news. Most ordinary consumers aren’t yet in need of the kind of speeds you can get through NVMe drives. But if you’re someone involved in large amounts of data processing, 4K gaming, or VR, then the differences in speed can be night and day.

When you’re selecting an NVMe SSD, you’re already choosing among the best of the best. The kind of performance and speeds involved is similar to comparing one sports car to another. That can make it difficult when trying to choose the right SSD. Although some of the factors in choosing and NVMe SSD are the same as choosing any other SSD, some aren’t. And if you’re not prepared to spot those differences, it’s easy to choose the wrong drive.

Moreover, anytime you’re selecting a hard drive, it’s important to exercise caution. What you’re deciding is the fate of your data. If a computer monitor breaks, it’s a simple replacement. If your mouse stops working, it’s a minor inconvenience. But the loss of a hard drive can mean permanently lost data, your operating system, and your ability to use your computer at all. That’s why unless you’re a total fanatic about data backup, it’s a good idea to stick to larger and more reliable brands when choosing a hard drive.

The NVMe drive market has become increasingly crowded, and Samsung’s recently released 970 PRO and EVO have only made choosing a drive more difficult. If you haven’t been keeping track of NVMe drives, the 970 PRO and 970 EVO are the third generation of Samsung’s latest SSDs. Like their predecessors, these drives are aimed at serving professionals and enthusiasts who are handling high bandwidths of data.

Both 970 drives make use of the M.2 form factor and a PCIe lane interface, and both are aimed at providing flexibility for high-performance PCs. And between the two, it’s safe to say that they have more alike than not. But if you were looking for a quick and dirty way to tell the difference between them, the 970 PRO is more of an entry-level drive, while the EVO more expensive option that’s better suited for enthusiasts. 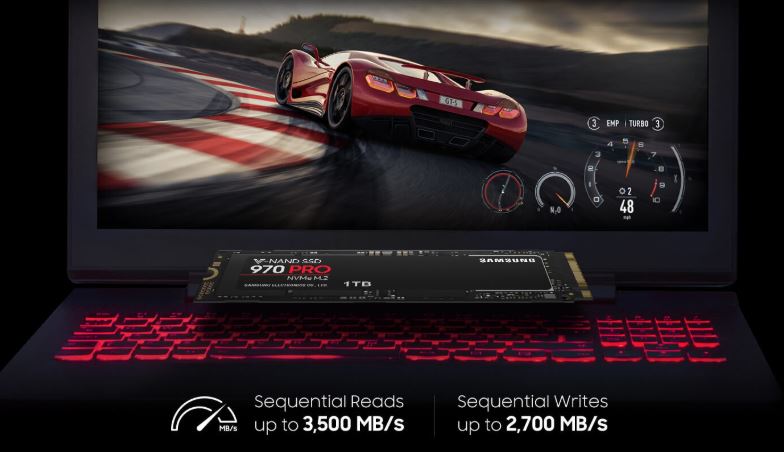 Simply by switching from SATA to NVMe can provide incredible speed improvements over ordinary SSDs. But the 970 PRO is fast among the fast. It takes full advantage of its format, offering 3,500 MB/s sequential read speed and 2,700 MB/s sequential writing speed. Speeds like that can make otherwise slow, large files load quickly. For running 4K graphics and similarly data-intensive tasks, the performance is stunning.

By contrast, the 970 EVO has the same read speed with a marginally slower 2,500 MB/s write speed. Even if you’re specifically looking to maximize write speed, the 200 MB/s difference can be considered marginal difference. It’s worth noting that compared to Samsung’s last generation of drives, both drives are nearly one third faster.

But why is the 970 EVO the more powerful drive if it has marginally slower write speed? What makes the EVO special is its exceptionally large buffer. The 970 PRO enjoys a reasonably healthy amount of cache memory, including 1GB and 512MB of LPDDR4 DRAM. But the EVO begins with the same configuration, and then adds on an additional 2GB cache. 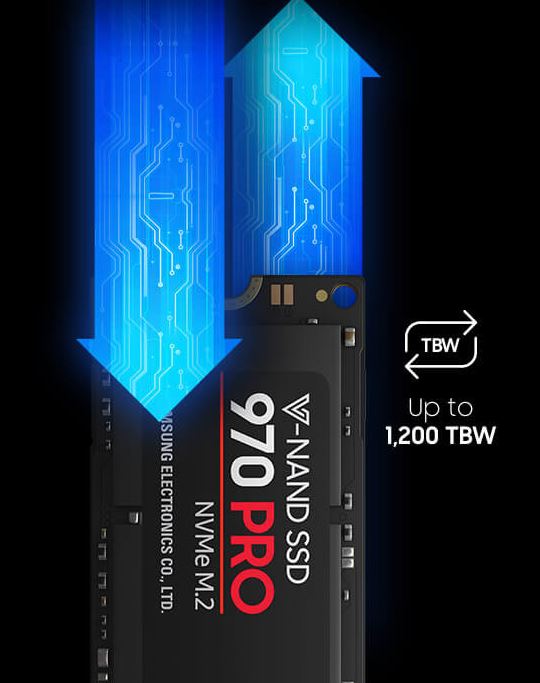 If you’re not familiar with cache memory, it’s basically a form of RAM. The process of reading and writing data can be smoothed out if the drive is allowed to temporarily place some of that data in its cache. In other words, when you’re reading and writing huge amounts of data, a large cache is what allows the drive to avoid start-and-stop performance for exceptionally data streams.

When you’re only dealing with smaller chunks of data, then you’re not going to see performance differences from one cache to another. But when you’re reading and writing at exceptionally high speeds, as the 970 series are capable of doing, then you need a cache that’s capable of keeping up with them.

Compared to the previous generation of Samsung drives, reliability has grown as much as performance. Traditionally speaking, hard drives are one of the computer components most likely to break. Moving away from drives with physically moving parts like HDDs helps to reduce their chance to break, but not eliminate it. Ultimately, every drive is experiencing a slow wear-and-tear, and NVMe SSDs are no exception. 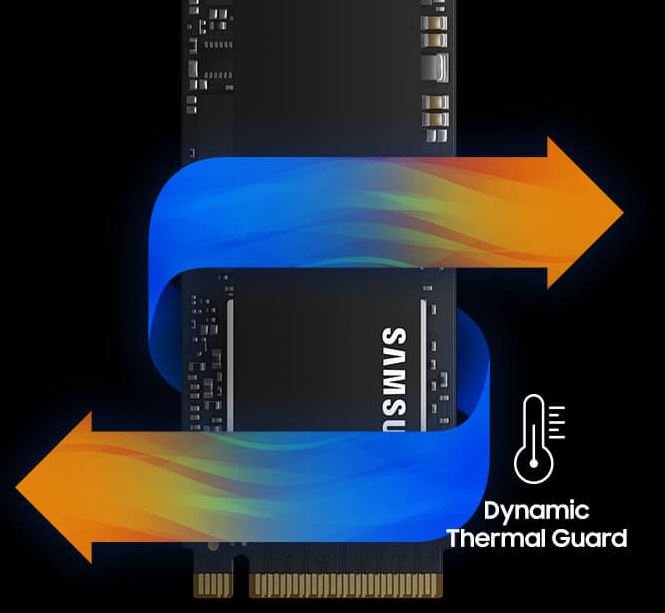 The earliest SSDs were notorious for having terrible durability, often failing within only one or two years of use. By contrast, the 970 PRO and 970 EVO have a stunningly long-lasting lifespan for such a relatively new technology. Both drives have an expected duration which exceeds 1,200 terabytes of data throughput. To put that into more practical terms, it means you could download large torrent files on your computer every day for years, and neither drive would break a sweat.

Part of that extended lifespan is due to Samsung’s use of a Dynamic Thermal Guard Technology, preventing overheating by allowing the device monitor temperatures and consequently better maintain your system. Both drives use a heat spreader and nickel-coated controller, further allowing temperatures to remain as low as possible, helping bolster the lifespan of the drive. Given that NVMe drives are low-heat to begin with, this makes the 970 PRO and 970 EVO exceptionally strong choices for someone building a small form-factor entertainment PC.

Storage space isn’t exactly the point of an NVMe SSD. But even if you don’t intend on using a drive specifically for file archival, that drive needs to be large enough to be practical. Installing Windows 10 and a handful of essential programs can eat up 50GB before you can blink. Fortunately, both 970 drives are available in reasonably large and functional sizes. The 970 PRO is manufactured in 512GB and 1TB. Both should serve well for the purposes of running your operating system, all your essential programs, and a small handful of modern games. 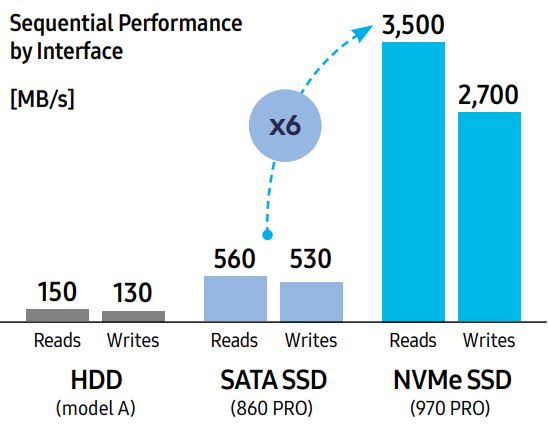 The cache-laden 970 EVO series is available in 250GB, 500GB, 1TB, and 2TB. Being able to access the impressive cache on the EVO with the inexpensive 250GB entry-point is a particularly enticing deal for some looking for practical performance more than bragging rights. But the 2TB drive allows you to take your enthusiasm for power to its limits, combining the space necessary for archiving data with the speeds necessary to do anything.

Both the 970 PRO and EVO are considerably more expensive per gigabyte than any SATA SSD. When you’re getting adequate performance out of your SATA drives, it’s far more cost effective to stick with that older format. For someone who’s using their computer to browse YouTube, check their email, and play games at 1080p, a SATA SSD can provide more than enough speed.

It’s when you’re not getting adequate read and write speeds that you need to turn to NVMe drives. For data processing, 4K gaming, and similarly large streams of data, a SATA connection simply isn’t going to cut it. People running processes like those will feel palpable differences between NVMe drives like the 970 PRO and their SATA counterparts. If you’re someone who needs that kind of higher performance, then it doesn’t make sense to compare the 970 PRO and EVO to less expensive SSDs. 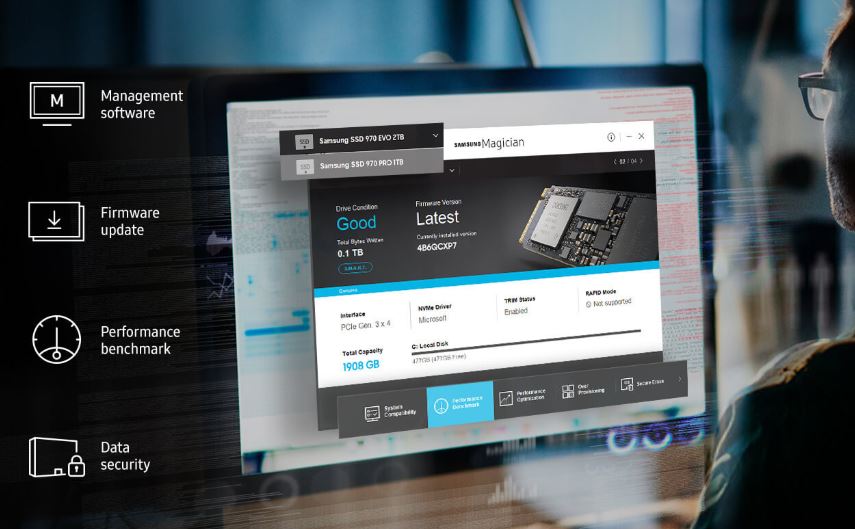 SATA SSDs still aren’t cost effective for data archival, and NVMe drives are no different. While some of the larger 1TB and 2TB drives can easily be put to that task, unless you specifically need the greater read and write speeds provided by the 970 series, you’re going to be better off choosing far less expensive traditional HHDs for data archival.

Many similarities exist between the 970 PRO and EVO. Both use the same essential NVMe 1.3 technology and adjoining M.2 form factor. They have almost identical random read and write speeds, with the EVO lagging only slightly behind. Both use almost zero power in their operation, making them an excellent addition for small form-factor, low-heat entertainment PCs. And both are supported by Samsung’s Magician software, which can help you keep a tabs on the health of your drives. 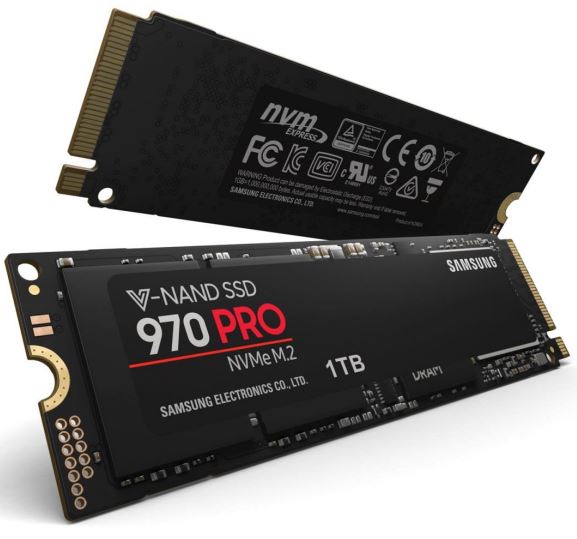 But there’s a big difference between them, and it comes down to memory cache. The 970 EVO has an extra 2GB memory cache. If you’re going to have your drive undergo sequential reading with huge chunks of data, then an extra 2GB cache can smooth out performance a great deal. It helps bring 4K content into the kind of performance speeds that we’re accustomed to seeing in 1080p content.

If you’re looking to get an NVMe hard drive because they’re fast and durable, then the 970 PRO is a great choice. It’s got a reasonable range of storage capabilities, and it delivers on everything people want out of an NVMe drive. It also has a marginally faster write speed than the EVO, which could make it a better choice for people who need to push write speed to its limits. The 970 PRO is priced about average compared to its competitors, but the Samsung name alone can help distinguish it from its more anonymous counterparts.

If you’re looking to get an NVMe drive because you’re looking for enthusiast-grade performance, then you want the 970 EVO. For breaking benchmarks, bragging rights, and getting the best possible hardware, it’s a great choice. It’s hard to think of any practical use that could put its power to the test – and there’s no reason to think it won’t be an equally impressive drive in ten years’ time. Although it’s hard to say any hard drive could be future-proof, the 970 EVO gets close.