If you’re a PC gamer, you’ve likely spent quite a bit of time assembling the perfect computer. We put tons of time in to choosing the highest performance components, and tweaking the settings to squeeze every last drop of performance out of it.

Reading up on enthusiast websites, you’ll see hundreds of pages of discussion debating the functionality of different choices. Is the hyper-threading in the i7 really worth the price over the i5? Will this water cooler allow you to overclock your graphics card by an additional 15%? These types of questions are the ones our systems are built around. At the end of the day, this might only result in a couple extra frames per second. These are the types of upgrades that are barely noticeable. Perhaps the reason that we pay so much attention to them is because they’re easy to quantify. When somebody pushes their brand new GTX 1080 to 2050 Mhz, the numbers tell you that it’s faster than yours.

Monitors, on the other hand, aren’t taken so seriously. But when you think about it, you’ll realize that the monitor you use may very well have the biggest impact on your gaming session. The highest end system might allow you to create a graphical environment that contains more detail than we ever would have thought possible, but the monitor is what turns these bits and bytes into something we can experience.

The Samsung CF791 may very well be one of the best monitors on the market. There is no single monitor that has impressed us quite as much as this model, but unlike graphics cards there isn’t a single number that can tell you exactly how much better this one is than others. To show you what this monitor has to offer, we’re going to have to go in depth. 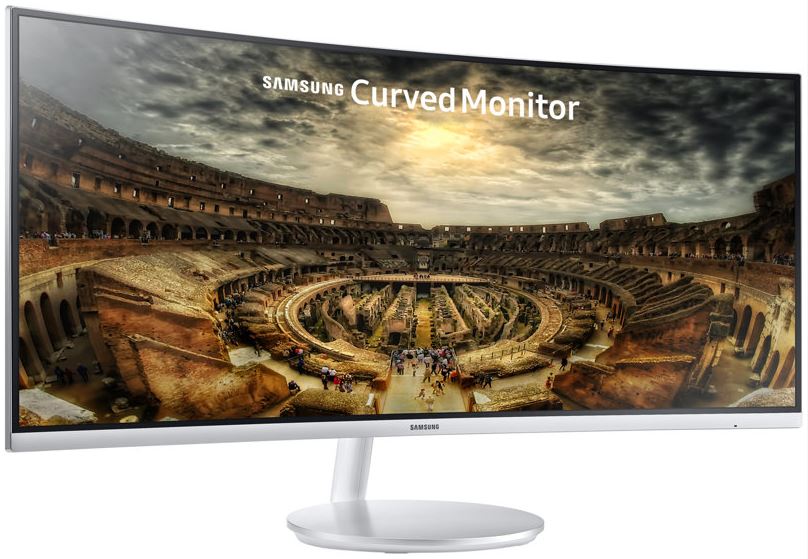 So, what exactly is the CF791 series monitor? It’s an incredibly stylish display with a huge amount of screen real estate. But it doesn’t just stop at size. Every element of the monitor is designed to make the display much more immersive. It does this through a combination of design and technology that work together to create something totally unique. Most of this tech is hidden, but that didn’t stop Samsung from making something that is truly stunning. The aluminum frame has an executive appeal, making it one of the most attractive displays we’ve come across. To keep it lightweight, the entire thing wasn’t made from metal. Instead, they put a shell over a glossy white plastic frame, maintaining it’s modern appeal. 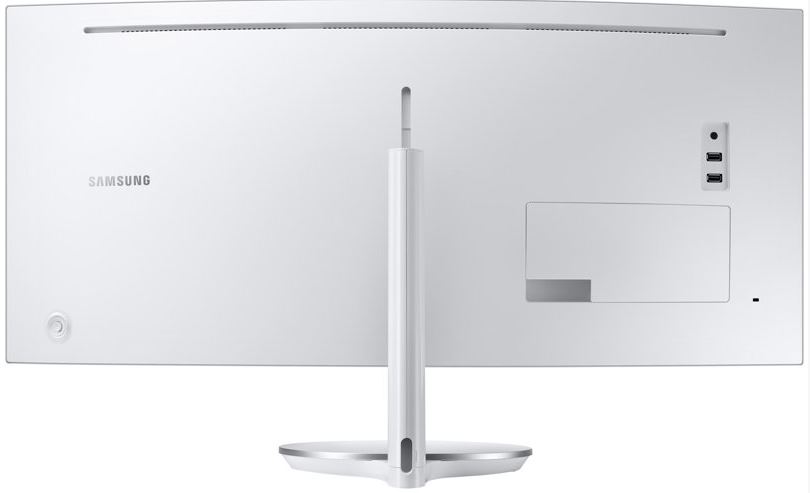 Samsung’s latest monitor doesn’t just outshine the competition, it outcurves it. At the moment, it’s actually the curviest monitor on the market. This is measured through an R value. If you were to arrange enough of these monitors next to each other, you’d eventually make a complete circle. The 1500R measurement means that the circle would be 3000mm, double 1500mm (the radius). The smaller this value is, the curvier the monitor is. 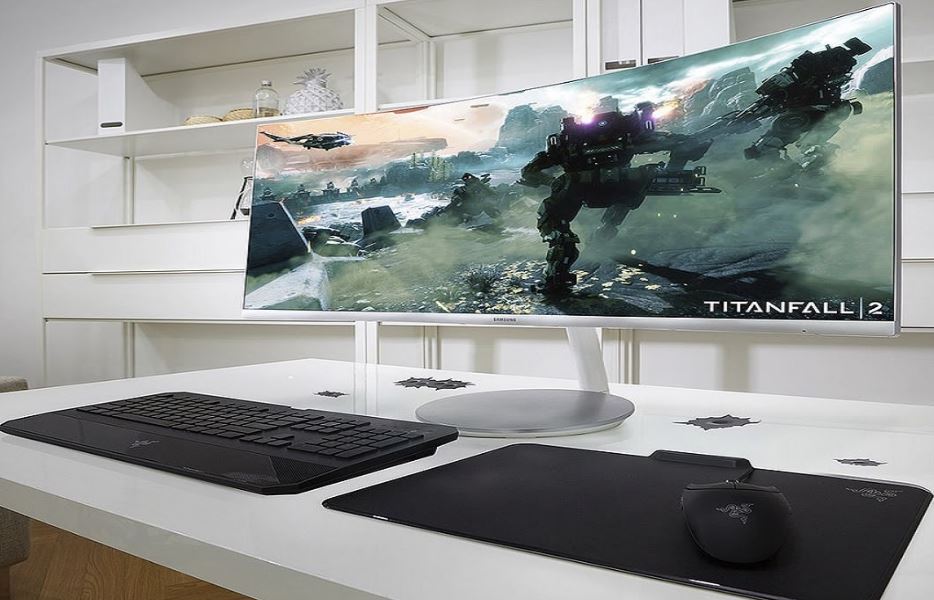 Why is this important? Well, the curve of the monitor is designed around how your eye works. If you’re sitting dead center of the monitor, the middle of it is closer to your eyes than the corners. This means that there is a little distortion. It might look square to you, but that’s only because your brain naturally corrects the distortion. But when the monitor is curved, each part of the screen (horizontally) is spaced the same distance from your eye as the rest. This seemingly subtle change makes the visuals much more immersive, as if the image is all around you. This is something you really have to experience to appreciate. It’s still a new technology, but one of our favorite display features on the market.

The monitor measures 34” diagonally, but it’s not shaped like your typical monitor. Most have an aspect ratio of 16:10, or 16:9 in the case of televisions. This means that if you were to divide up the monitor into squares with equal height and width, the screen would be 16 squares along the bottom and 10 squares upwards. The CF 791 has a 21:9 aspect ratio. It’s not quite as wide as having two monitors next to each other, but since there is no division in the middle this makes it much better for gaming or enjoying multimedia. 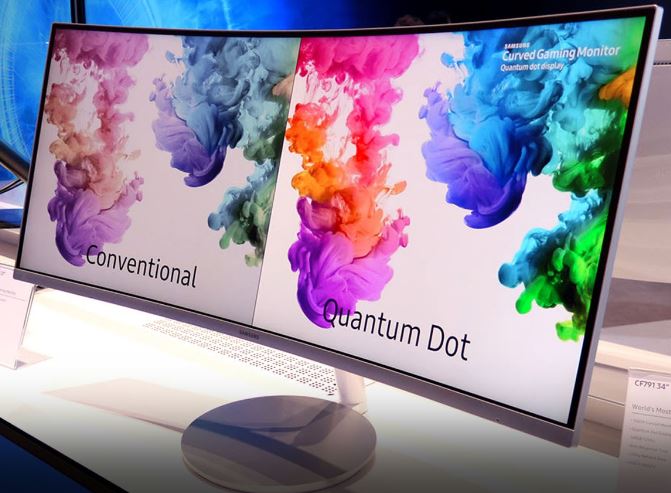 When you’re buying a monitor, many decisions are black and white. You know right away if a bigger monitor is better, or how much curve you want, or whether you want a well-designed case. But resolution can be a bit of a gray area. If you’re enjoying movies and television, then you obviously want a 4K display. But that’s just not suitable for gaming. Even with a top end graphics card, trying to push out that many pixels is going to make your card choke. Meanwhile, scaling an image causes distortion that’s best to be avoided. 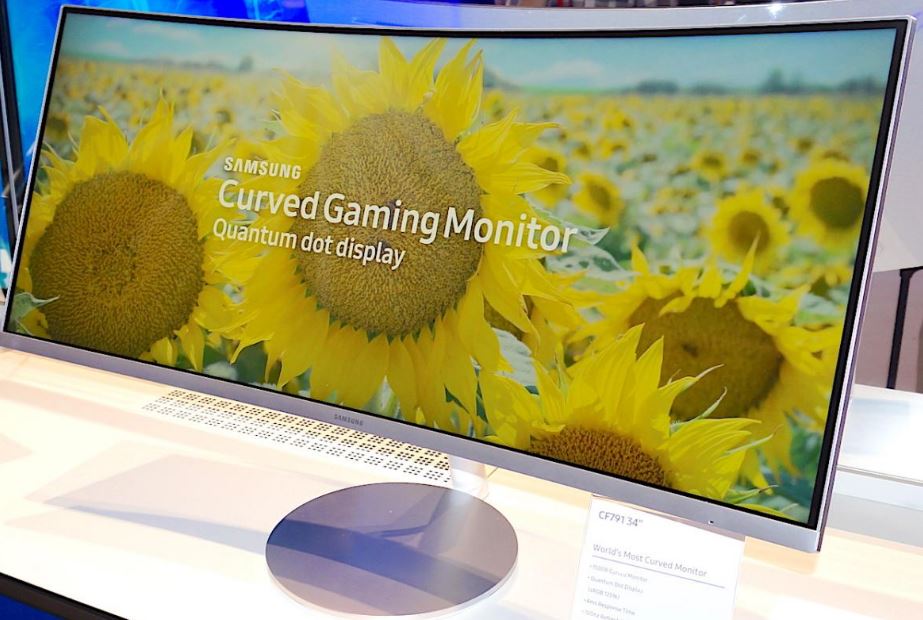 Since the aspect ratio doesn’t exactly make this monitor ideal for movies, the resolution was designed with gamers in mind. It clocks in at 3440 x 1440. In a way, it’s almost 4K. And on paper it’s a 1440p display. But realistically, it’s neither. Even if it has the vertical resolution to play back UHD content, it doesn’t have the vertical pixels.

When you compare it to other 1440p monitors, this one is much wider. The important thing is that the total number of pixels is suitable for modern games. You do need to have a high-end graphics card if you want to push your settings up, but this is still attainable for modern gamers. If you had a 4K display, you’d literally need the best graphics cards on the market to get reasonable performance. But with the 3440 x 1440 resolution, you can crank the graphics up to 11 and still enjoy the 100Hz refresh rate. 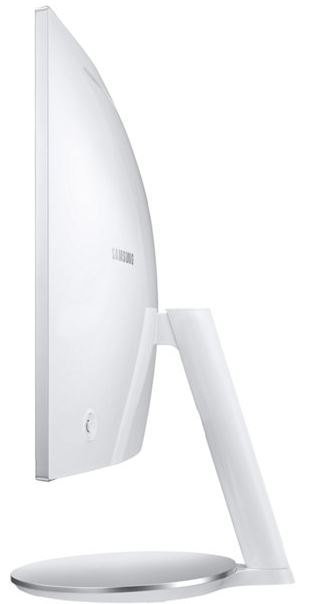 It’s got something called “quantum dot” technology. In addition to the red, green, and blue pixels, there is a separate sub-pixel that makes yellow tones. Monitors are generally measured in their ability to display the RGB spectrum. Many are in the 98% range, meaning they can create 98% of the total colors that are theoretically possible to create with red, green, and blue pixels. This one can create 125% of the spectrum, allowing it to display incredible content. 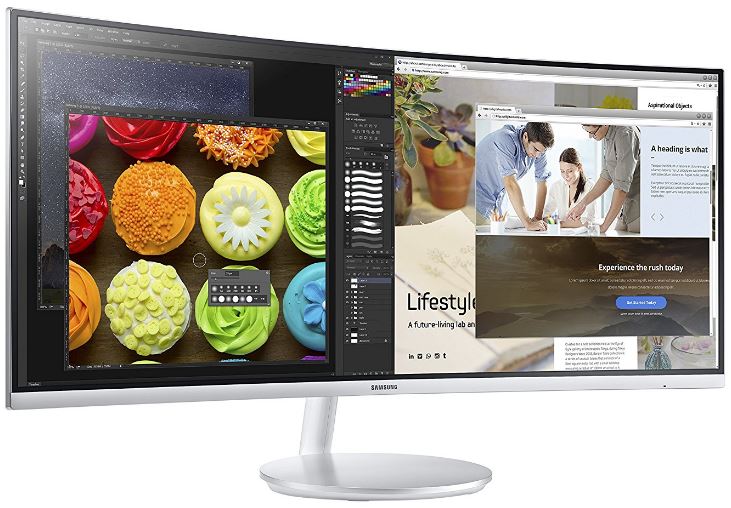 We’re a pretty big fan of this monitor, but when you push the envelope in one direction you’re going to have to cut some corners in another. The 21:9 aspect ratio isn’t great for movies. There are the occasional films put up in “cinema” style, but most Blu-Rays and Netflix content will have bars on the side or be cropped. Another issue is the spectrum. It’s designed to create very vibrant looking images, but it’s not technically accurate. If you’re doing graphic design or photo editing, you might want to go for a proper calibrated display. Finally, our last concern is the cost. This is a premium monitor, and you’re expected to pay a premium price. If cash is tight, you might want to wait a year or so for the curved display technology to become more affordable. 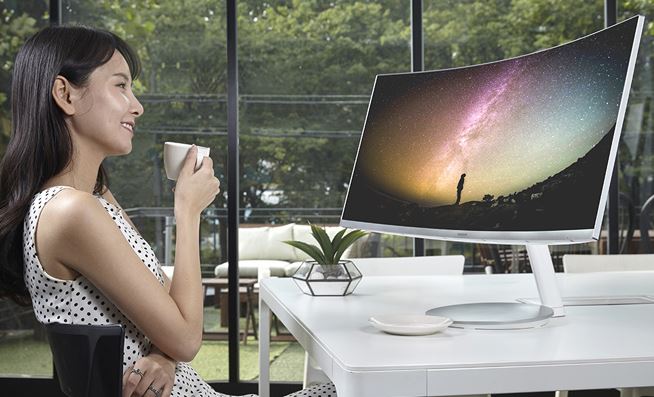 If you’re looking for an impressive curved display that can help take your gaming to the next level, then we highly recommend the CF791. This monitor allows you to put dual screen setups on the back burner and get the same immersive, large format experience from just a single display. It’s one of the most vibrant and attractive screens we’ve used, and designed specifically with gaming in mind.

That being said, it’s not going to be the best choice for everyone. If you’re looking for a more affordable gaming monitor, you might want to consider the Samsung CFG70 series. These monitors have some of the same high end technology Samsung used in this monitor, but for a much more affordable price. For business users, we’d recommend checking out the LG 32MA68HY-P 32. If it’s cryptic name didn’t give you any hints, this is a large format screen designed for business rather than pleasure.

But for gamers, you really can’t go wrong with the CF791. It’s an incredible display, and if you can scrounge up the cash it will be a purchase you’ll be glad you made the purchase.

Ultimate Guide to the Best External Graphics Card …
May 28, 2019