They say content is king, and they say a picture is worth 1,000 words. The new Samsung Gear 360 makes the most of both of those old adages, bringing them firmly into the 21st century. With the Samsung Gear 360, you can easily record stunning quality footage and replay it through your Gear VR or Galaxy smartphone.

It’s one of the newest products to join the Samsung family, debuting in mid-2016. This easy-to-use camera allows users to take the photo and video creation to the next level – both in capturing images and editing them to get the best pictures, and sharing them easily among friends and family. 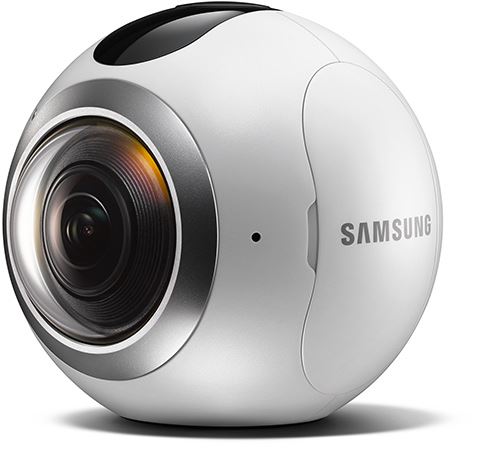 The Samsung Gear 360 is a small white orb that fits in the palm of your hand – this camera is just 66.7 x 56.3 x 60.1 mm (roughly 2.5 x 2.2 x 2.3 inches). It’s hard to believe something so small can take such impressive pictures! The built-in handle that splits into a tripod is super cute and functional, too. You just want to pick it up and take it with you. Hold the Gear 360 out by its handle to capture the action wherever you are, or split the handle into 3-legs and put it down to immerse your camera in what’s going on around you. Capture someone special blowing out birthday candles, or snap a 360-degree selfie with your best friends!

Using this camera requires no special technical knowledge beforehand. Getting started requires no more than installing the SD card and battery, and then syncing the camera and your smartphone. Pressing a button on the side of the camera allows you to change the mode among time lapse, video looping, video and photo settings. You can also use the Viewfinder mode on the app on your phone as a remote control for the Samsung Gear 360.

Practically speaking though, carrying this camera around may require a bit of planning; it’s not quite like slipping your phone into your pocket. It could prove to be more difficult to travel with if you don’t have pockets, or if you’re wearing skinny jeans this probably won’t fit. For nights out with friends or neighborhood parties, it’s probably not going to be a concern, but taking it to a sporting event, concert, or adventure like sailing warrants keeping an extra-tight grip on it.

Once you upload your video and photo content to your phone, it’s easy to swipe or tip your phone up and down, left and right, to view all 360 degrees of your images. Snap your phone into the Samsung Gear VR to view your video as it happened.

The Gear 360 is user-friendly and technologically robust. There’s a removable, rechargeable 1350mAh battery, and gyro and accelerometer sensors; it’s equipped with 1GB RAM and a microSD card (up to 200GB). Bluetooth and wifi-connectivity allow users to connect their camera to a Samsung phone to upload videos and photos with ease. It’s also easy to upload photos and video content you’ve created to social media. 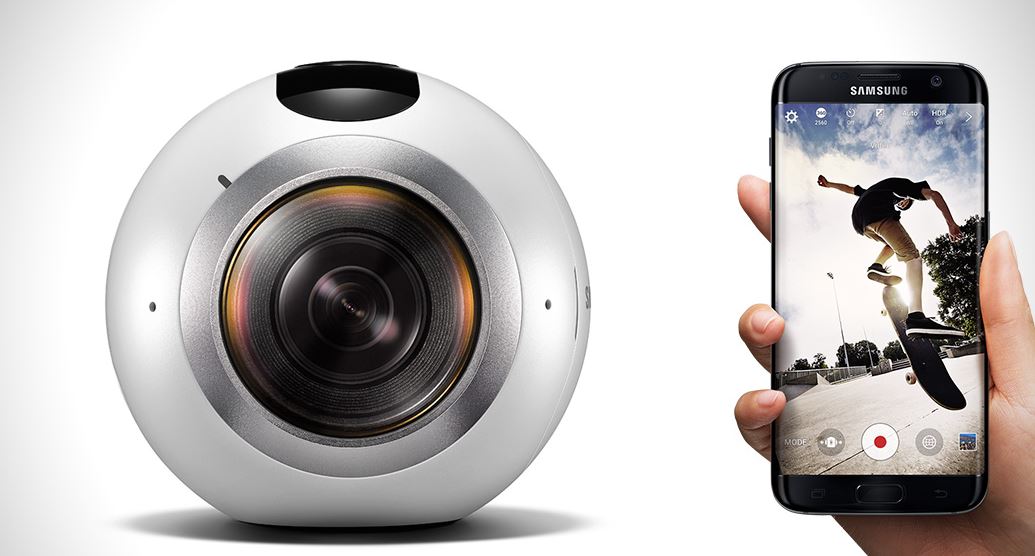 Users get a full 360-degree view with recording front and rear lenses that each cover 180 degrees; you can enjoy them separately or put them together and you’ve got a 360-degree view that doesn’t miss a thing. The Gear 360 delivers high-resolution video and still images, too (3840×1920 or 25.9MP). The F2.0 lens saturates color in your shots, and makes each shade more more vivid and distinct. It’s dirt- and water-resistant, and really designed for use out in the world. So take it to the park, skiing, a wedding or graduation, or even a concert or sporting event!

The Gear 360 offers a great deal of functionality for such a small camera. You can enjoy both time lapse and video looping on both the single lens and the double lens. Upload your video to your Galaxy phone using Bluetooth; use your smartphone for playback and then pop it into the Gear VR viewer for an intense “you-are-there” feeling. MP4 videos are recorded at 30 frames per second (3840 x 1920 in double lens, 2560 x 1440 in single lens). Still photos in JPG format are shot at 3072 x 1728 (5M) in single lens, and 7776 x 3888 (30M) in double lens. Use the Viewfinder mode on the phone to capture still photos from your video footage. 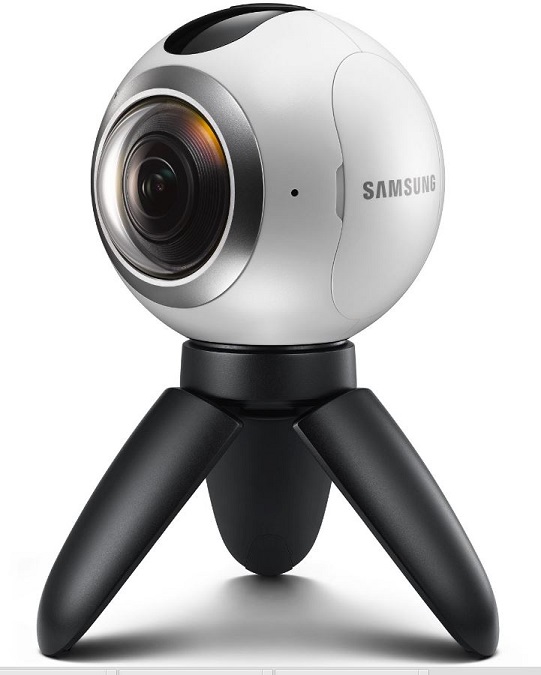 You’ll also need a minimum screen resolution, processor, graphics card, and memory, in order to get the full functionality of the ActionDirector software. Video content from the Gear 360 is best viewed on Chrome, Edge, and Firefox browsers; IE 10 may not display images properly.

How Does the Samsung Gear 360 Compare to Similar Cameras?

The Samsung Gear 360 is expected to cost roughly $450, pricier than similar products like the LG 360 CAM camera ($199) and even the least-expensive GoPro Hero Session camera ($199). That said, there are definitely benefits you’re getting for that cost.

The videos and photos produced by the Gear 360 are of a higher quality than the LG 360 CAM, which is also able to capture 180-degree views and 360-degree views. The GoPro Hero Session camera beats them both in terms of quality, but can’t do a 360-view. 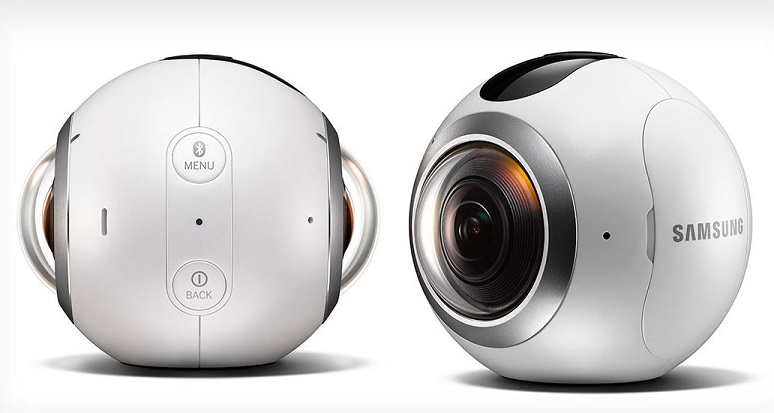 There doesn’t seem to be a way to secure the Samsung 360 when participating in rough-and-tumble activities where it might be hard to hold onto it securely. This is a similar concern with the LG 360 CAM; however, the GoPro can be securely mounted. The sample video on the Samsung site shows mountainside video content shot with the Samsung Gear 360 but it’s hard not to wonder how the skier didn’t lose the camera. We can only assume that soon enough there will be some sort of mount for things like biking, skiing, and other more rugged activities.

The LG can be used in conjunction with any phone running at least Android 5.0 or iOS 8; the GoPro Hero Session can also be used on any phone running its app, while the Gear 360 will only work with Samsung products. That could be a real drawback if you’re not committed to Samsung products on an on-going basis; however, you can always be assured that because your camera and your phone are from the same “family”, chances are excellent that they’ll always work well together, even after the inevitable software and firmware upgrades. 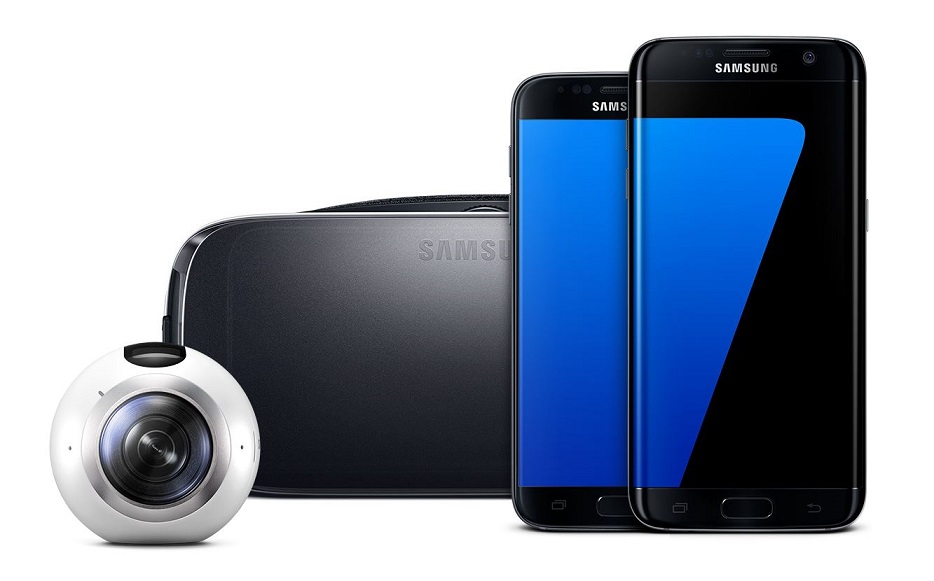 The Samsung product materials don’t indicate anything about a microphone and sound recording. The GoPro Hero Session also offers users the ability to edit video footage on a desktop computer; however it also offers additional, advanced video settings like sharpness and exposure. The LG 360 CAM does not offer the same ease in editing or sharing video and photo content.

While the Samsung Gear 360 is expensive compared with similar cameras, the photo and video quality is remarkable. The ability to capture a still photograph from a video sequence is a valuable benefit, meaning you never have to decide to shoot pictures or video – you get the best of both worlds. 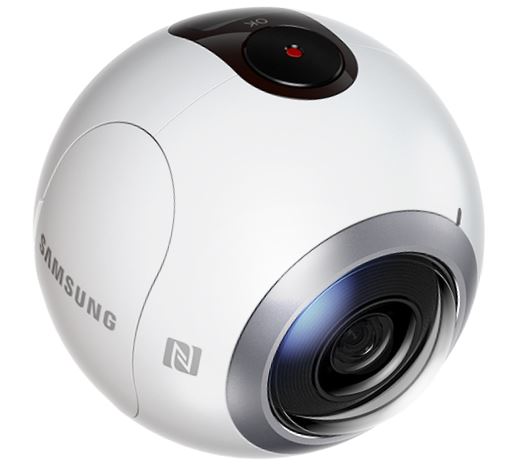 It’s meant to go places and can withstand some dust and splashing; however, care still needs to be taken – it’s definitely not dirt- and water-proof. Also, because there seems to be no way to securely affix it to something, you need to hold on really tight if you’re out participating in sports and adventure activities with it!

That said, especially for folks looking to step just beyond the camera built into their smartphone, the Samsung Gear 360 is a pretty easy piece of technology to get used to. The biggest step in getting started is pairing the camera with your smartphone. It’s seamlessly integrated with other Samsung products and software, and offers users a lot of options for creating, editing, and sharing content. Photos and video can be uploaded to social media accounts or enjoyed through the Samsung Gear VR.