Ever since computers first hit the market, analysts have been predicting the end of a paper-based world. While it’s true that technology has reduced our need for physical media, we’re still a long way off from eliminating it.

In reality, the idea of going totally paperless may be a bit far-fetched. Hard-copy material still has its place in our digital world. What does need to change is the way we use this material. Whether you’re using OneNote to take notes in class or Facebook to manage your communication, there is one thing that all could-based tools have in common. They take something disorganized, and present it to you in a linear fashion. When we have the ability to access any piece of information we want at the touch of a button, we can be much more effective at managing that information.

The Scanmarker is a unique way to bridge the gap between the physical and the digital. It’s being positioned as a way for users to quickly take clippings of any print media and digitize it for later access. While it’s created a ton of hype around the concept, it still stands to be shown whether this product is truly ready for prime time. We had the opportunity to try it out for ourselves. If you’re wondering what this unique invention can do for you, we’ll help you find out. 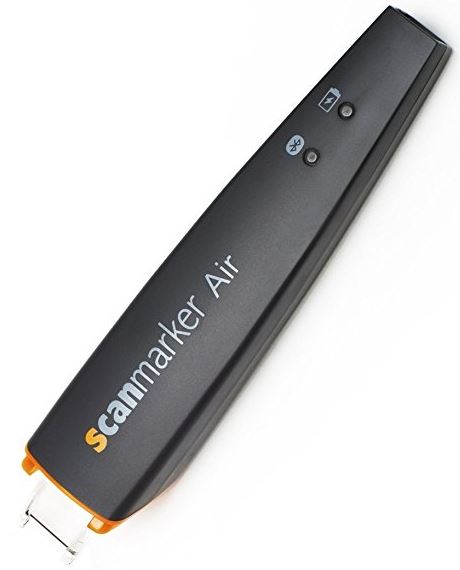 When we first opened the box, we were surprised at how large the Scanmarker Air was. Its size is comparable to that of a utility knife. It’s somewhat rectangular in design, with large face gently tapering towards the slim back. The cap pops off easily, and can be stored on the back just like a regular pen. When it’s removed, the clear glass tip can be seen. The tip is square, and protrudes at a slight angle from the base. Essentially, it’s a smooth lens with two guides on either side. These guides can be placed on top of any page. By dragging it across the page, just like a highlighter, the scanmarker is able to scan the words and convert them into editable text that can be accessed from any computer.

Before we started using the Scanmarker, we took a minute to familiarize ourselves with the layout. The plastic edges are smooth, but easy to grip. We found that it was easiest to hold between our thumb and index finger, just like a regular highlighter.

There are two LEDs on the face of the device. The one closest to your hand indicates an active Bluetooth connection, and the one next to it illuminates when the battery gets low. The orange tip and Scanmarker logo are simple, but attractive. It certainly looks like a modern piece of tech, but the design felt functional and utilitarian in nature. In our eyes, it was perfectly suited for the function. 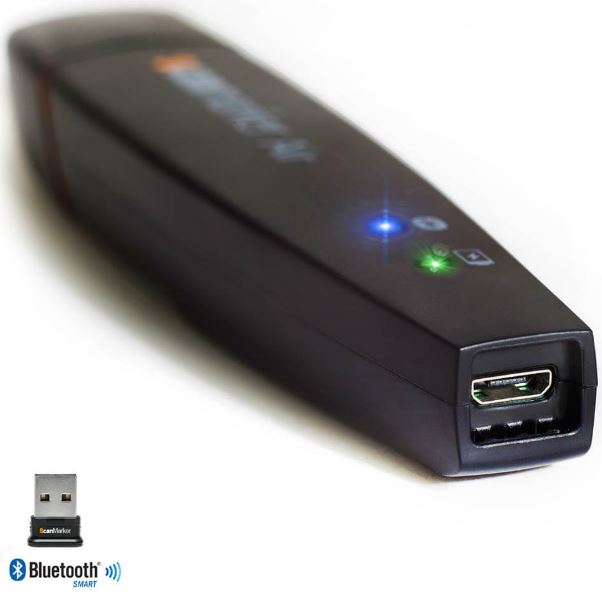 There are three different ways you can connect to the Scanmarker. The simplest (and most cumbersome) is via USB. Just plug the Micro USB end into the pen, and the other end into your computer. This is handy to have if the battery is dead, although being physically tethered to a device does reduce the flexibility a little.

Personally, Bluetooth is our favorite way to connect. Virtually all cellphones and computers have Bluetooth built right in, so you likely won’t need to do any setup to get it running. Just pair and go. But if you’re using a computer that doesn’t have Bluetooth, the included dongle works just as well.

The Scanmarker is compatible with PC, Mac, Android, and IOS devices. Although Linux is not currently supported, we were still happy to see how compatible the first generation was. 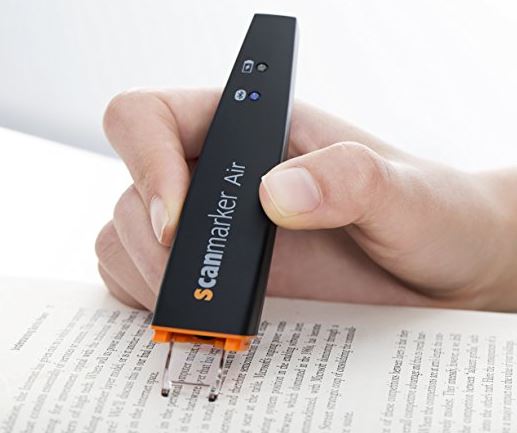 After getting connected and installing the free software on our home PC, we were excited to see how it operated. Even though it was our first time using it, we felt as if we had been using it for weeks. Just like a highlighter, you place the guide on a page and start sliding it across. The text appeared on our screen almost instantly.

There were, however, a few adjustments. When you’re highlighting text, you generally move your hand quite slowly to give the ink a chance to set properly. This is not the case with the Scanmarker. We found that it worked the best when you move your hand quickly. It’s capable of scanning an entire line in only one second, so the only limitation is your ability to hold your hand steady. And we found that even that is easier when you do a line in one swift motion, rather than trying to gently glide across the page. 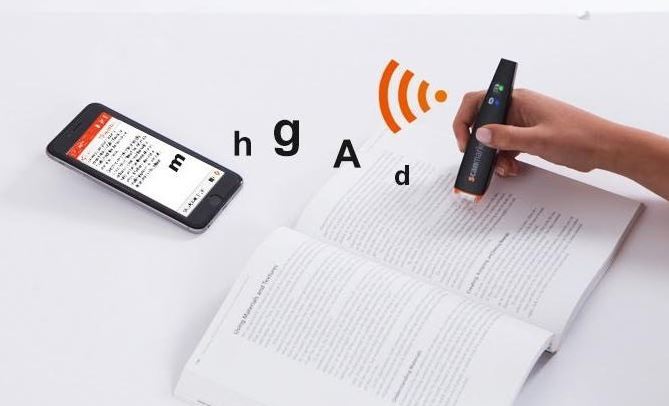 Another thing we learned quickly was the fact that you do not have to do one line at a time. The Scanmarker can handle any font up to 22pt. This means that with standard text, you can often fit two lines within the guide. As long as both lines are completely enclosed, you can scan two lines at a time. But if you’re using a document that has larger text and you can’t fit two complete lines in the guide, you’ll want to center the line you intend to scan and work your way down.

The end result is a text document that you can edit in your word processor of choice. The battery life is quite good, so you don’t have to be using it constantly. You could be reading through a textbook, picking up the Scanmarker to quickly save any important information you come across. The manufacturer rates the battery life at 7 days of “average use.” We’re seeing about 20 hours cumulatively, but your mileage may vary. If you’re constantly scanning line after line, you might see a bit less. But if it’s spending lots of time by your side, you should see a lot more. Since it can be used with the USB cable attached, this shouldn’t affect usability at all. 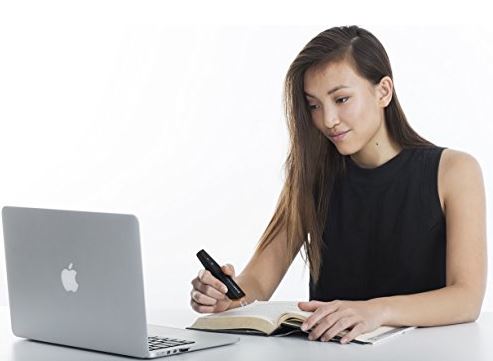 Despite what the name implies, the Scanmarker is much more than just a marker that scans. It has a few other handy features that we were quite impressed with. You can have it read text aloud to you as you move it over the page. It has a buffer that supports roughly half a page. You can scan each line as you go, or do many lines at once and wait until it’s done reading to you.

One of our favorite features was the ability for it to translate the text you are reading. It supports over 40 different languages, and can either read the translated text to you or type out the translated document on your computer. We are really looking forward to putting the translation feature to use when travelling, but the cloud features will keep us occupied in the meantime. The Scanmarker can upload all of your documents (in real time) to Google Drive, Dropbox, iCloud, or send them through Email. 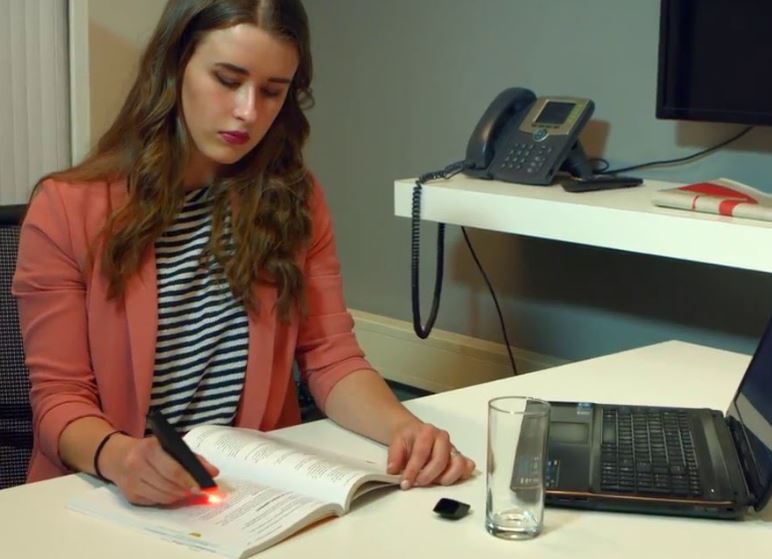 The Scanmarker is a brand-new concept, and certainly something that we haven’t come across before. But as a first-generation product, it wasn’t without its flaws. The first thing that that took some adjusting is the delay from the time you start scanning to the time words start getting picked up. You actually need to start a few characters behind where you want to start scanning, or the first word will be truncated.

We also found some occasional glitches with how text was read. Most commonly, we found that the odd apostrophe was missed, or hyphens were misread as spaces. While these are relatively minor issues, it did mean that any critical documents would have to be proof read. 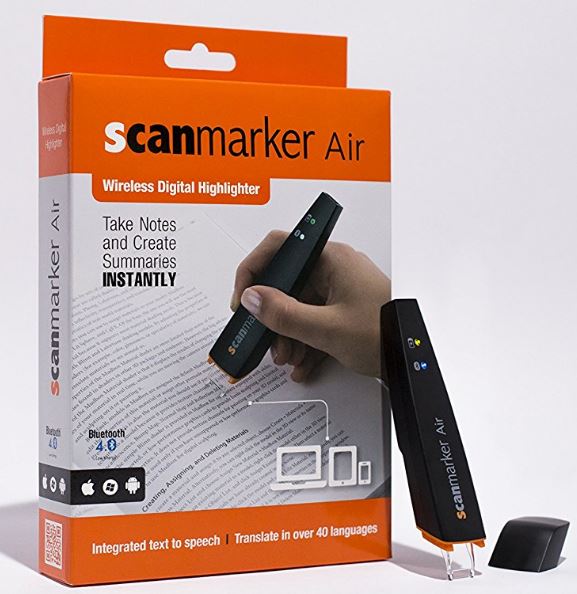 The Scanmarker Air isn’t the first of its kind, as several other companies have attempted to create a similar handheld scanner. But we can safely say that it’s the first of its kind to be truly ready for primetime. It’s very easy to use, and you’ll be able to get it up and running in a matter of minutes. The flexibility of the software means that you’ll be able to take it with you on the go, using your phone to automatically upload all of your scanned documents to your favorite cloud based service.

We’d highly recommend the Scanmarker to anyone who’s looking to scan partial documents as they read, or digitally store excerpts for later access. That being said, we don’t think it’s a replacement for a full size scanner. If your goal is to scan complete documents in high volume, we’d recommend that you check out our review of the best portable document scanners. In many ways they operate just like full size scanners, but their increased portability makes them better for high capacity usage.