We put our smartphones through a lot. They go with us practically everywhere and we rely on them for just about everything from communicating to listening to music to watching movies. Most smartphones are well-made and will be able to withstand a lot of wear and tear, but eventually they do start to degrade. Even by doing things like regular nightly charging you can wear out your phone’s components. Charging ports can get damaged, screens can get scratched and various buttons and switches can easily break.

However, there are ways to preserve the integrity of your smartphone that come in the form of easy to use accessories. One of the biggest inconveniences that could result from regular use of a smartphone is a damaged charging port. Typically, you’ll need to charge a smartphone with the included charging wire, but repeatedly inserting and ejecting a charging cable can eventually ruin the charging port, rendering it useless. At this point you aren’t left with many choices. You can either get the charging port repaired, or purchase a new phone all together, both of which can be costly.

Luckily, there’s a way to prevent your phone’s charging port from getting damaged in the first place. Wireless chargers are now readily available for a variety of different smartphones, and can be used to power up your phone without repeated use of the charging port. Generally, these wireless chargers simply make contact with the exterior of a phone in order to charge the battery. They are truly an excellent way to preserve your smartphone’s delicate charging port, as well as stay powered up in the home or office.

We took a look at the popular Seneo Wireless Charger to see if it was the kind of charging solution that could both enhance battery longevity as well as protect the delicate components of its compatible smartphones. We checked out the design, the charging efficiency, the overall compatibility as well as any drawbacks of the Seneo Wireless Charger to give you a comprehensive look at how useful of an accessory it really is. 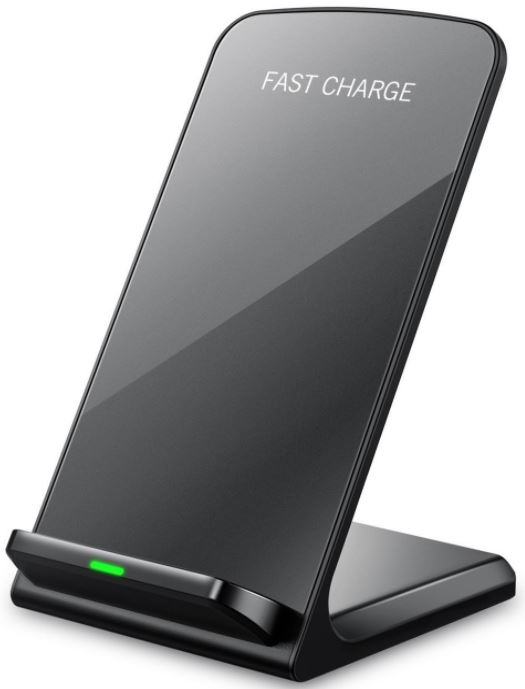 The Seneo Wireless Charger has a really sleek, yet simple design that we felt made it intuitive and really simple to use. It’s extremely thin and lightweight, measuring in at 2.8 x 5.8 x 3.4 inches and weighing just 4 ounces. Despite its small dimensions, it felt sturdy and like it would fit in well on a kitchen counter or office desk. It comes in either black or white too, so it won’t be hard for you to match it to your space. 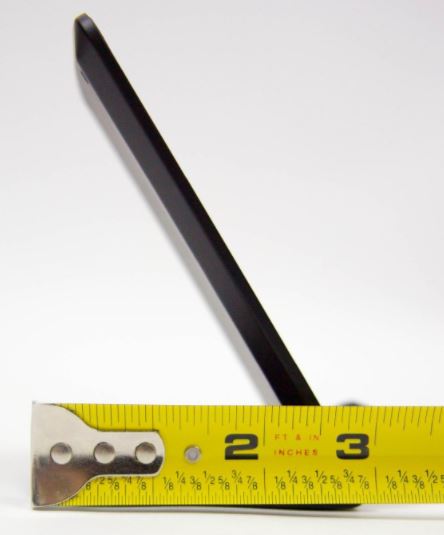 It has a small, smooth shelf to place your smartphone on during charging, as well as a thin stand section to keep it upright. You won’t see much on the stand except for the words “Fast Charge”, and on the shelf you’ll find a small LED light. It doesn’t seem like the kind of charger that would make sense to travel with due to its shape, but if you really wanted to you could stuff it into a backpack or laptop case. There’s also a Micro USB port in the back, as well as an included Micro USB cable that you’ll need to power it. 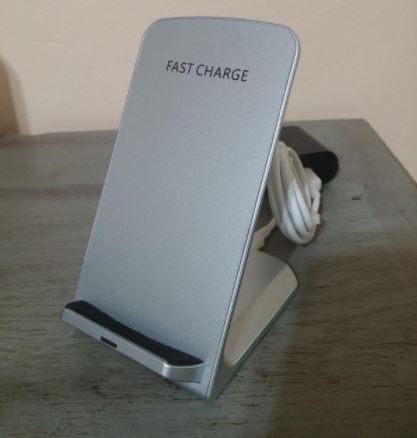 One thing to note about the Seneo Wireless Charger is that the charge times will vary depending on the kind of adapter you use as well as the device you want to charge. For the iPhone 8, iPhone 8+ and the iPhone X, you’ll still be able to charge up wirelessly, but will be able to do so at the same speed as your regular Apple charger.

For Samsung phones like the Galaxy Note 8, Galaxy S8, Galaxy S8 Plus and the Galaxy S7, you’ll be able to vary your charge times depending on your adapter. We found that with a QC 2.0 adapter the charge time was about the same, if not a little slower than a standard wired Samsung charger. However, by using a QC 3.0 adapter you’ll get significantly faster charge times than with both the 2.0 adapter as well as your standard first-party charger.

Overall, we found the charging capabilities to be acceptable for Apple phones, and outstanding for Samsung phones. It was a little bit of a letdown that newer Apple phones couldn’t take advantage of the Seneo Charger’s faster charge rates, but it still charged the battery easily without the need for an additional wire. When it came to Samsung phones, we were blown away by how quickly the wireless charger could restore battery life. It’s also worth noting that in both scenarios, the Seneo Charger delivers a much faster charge when you take off your phone’s case.

The charger also has two coils built in, so you can either charge your phone horizontally or vertically, depending on its size or shape. We felt that this added a lot of versatility because it enables you to charge your phone but also use the charger as a stand in whatever way you please. However, you’ll want to make sure that your phone is lined up exactly in the center of the charger, or else the internal coils will not line up and charging will not occur. 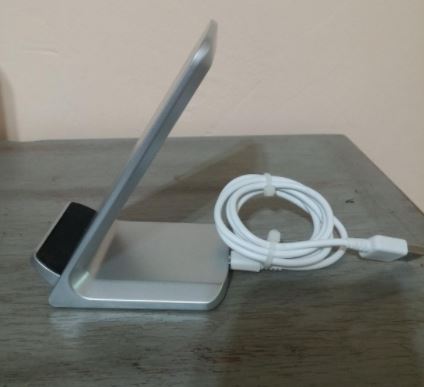 The Seneo Wireless Charger is compatible with a number of smartphones, but only those that already have wireless charging coils built-in. It’s definitely worth checking to see if your smartphone has wireless coils in it before purchasing the charger, because many earlier Apple and Samsung models do not have this feature. You’ll be able to charge the iPhone 8, iPhone 8 plus as well as the iPhone X without a problem. In addition, a variety of Samsung phones, specifically, the Galaxy Note 8, the Galaxy S8, the Galaxy S8 Plus, the Galaxy S7 Edge, the Galaxy Note 5, the Galaxy S6 Edge Plus as well as the Galaxy S7. We would have liked for the Seneo charger to be compatible with more Apple devices, but due to the way it charges—by transmitting power from its built-in coils to the ones in your phone—earlier models without coils just won’t work.

That being said, if you aren’t sure if your phone is compatible, the indicator light will let you know. If the indicator light on the front of the charger flashes continually from blue to green, your smartphone isn’t compatible. Only when you see a solid green light will you know that your phone is both compatible and charging. The only thing that would have made it better would be a way to let users know when their battery was full but, in general, this is pretty obvious just from looking at your phone’s batter meter. 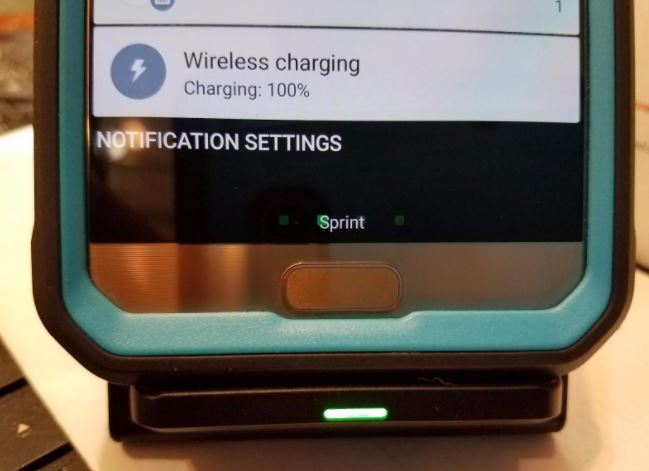 While we found the Seneo Wireless Charger to be extremely efficient, it does have a few downsides. First of all, it doesn’t offer fast charging capabilities for Apple phones. We felt that this was a bit limiting, mainly because so many people use Apple phones and may want to take advantage of the charger’s faster capabilities. We didn’t see why the Seneo Charger couldn’t have been made to charge both Samsung and Apple phones with the same speed and efficiency.

We also would have liked for it to come packed with an adapter. The only thing you’ll find in the box is the charger, the manual and a Micro USB cable. For someone who may have misplaced their existing adapter and is looking for a new, faster way to charge their phone wirelessly, this is sort of an inconvenience. We would have preferred for it to be more of all-in-one charger that was ready to go right out of the box. 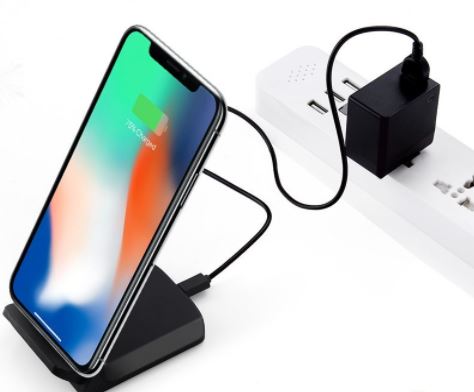 Also, charging with the Seneo Wireless Charger can be easily interrupted by metallic or magnetic objects. We noticed that when we had a magnet or metal object of any kind, the charger would alert us that the phone was incompatible, even if it was a model we’d used successfully before. We could see this being a little bit of a problem for users who may be unaware of something in their homes or offices causing this kind of interference.

Unless you know exactly what is interrupting the connection between the charger’s coils and the ones in your phone, it’ll just appear that the charger is malfunctioning. It would have been really impressive for the charger to have a small LCD built-in somewhere that not only indicated compatibility, but also alerted users as to whether or not there was some type of magnetic interference. 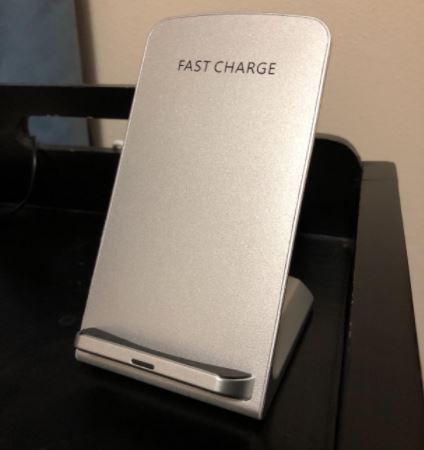 Overall, we really liked the Seneo Wireless Charger. We found it to be relatively versatile, compatible with a number of different phones and found it to have some very impressive charge times. We also really liked the fact that it could double as a stand so that you can still use your phone while it charges, and that it had an indicator light to let you know if your phone was compatible. It isn’t the kind of charger that we’d recommend taking with you when you travel, but it’s absolutely perfect for the kitchen or for your desk.

We would have liked for it to be able to withstand magnetic interference, or at least alert the user in a clearer way when there was a magnet somewhere close by. Given that the technology built into the charger does rely on magnetic coils, it was understandable that charging would be interrupted, but it didn’t make it any less inconvenient that we couldn’t use it near metal or magnets.

Despite its few shortcomings, the Seneo Charger is certainly well-made and can easily power up a number of smartphones. Not only is it a convenient charging option, but using it over time will definitely help preserve your existing charging port so you can get the most out of your current smartphone.