When most people think of home entertainment, they think of an expensive flat-screen TV and surround-sound speakers. For watching movies or TV shows, this kind of setup is enough to create a very immersive viewing experience. Yet, even the most sophisticated of TVs can’t quite give you the cinema-quality feel you’d get from a trip to the movies, and for a long time it wasn’t possible to recreate such an experience in the home.

However, nowadays you can watch your favorite Hollywood blockbusters the same way you’d watch them at the theater without leaving your couch. There are tons of options available for portable projectors that are powerful enough to make you feel like you’re really a part of the action.

They can usually handle media from a variety of sources like smartphones, laptops, DVD players and gaming systems, and enable users to adjust the projection image so that it fits their living space. The best part is they won’t break the bank and, for those who typically head to a movie theater for entertainment, could theoretically pay for themselves.

Of course, just like any piece of home entertainment gear, not all portable projectors are created equal. Some may yield a low or average image quality and might not be compatible with many media formats, while others can project in incredibly high resolutions and play just about anything. Considering that there are so many choices on the market today, it pays to do a little bit of research on a projector before adding it to your living space.

In this breakdown we’ll be looking at the newly released DBPower RD-810 LED Portable Projector to see if it can really hold its own against other similar projectors out there. We’ll be focusing on the design, the compatibility, the specifications, any special features it may have, the image quality as well as any possible downsides contained in it to see if this projector can really recreate an authentic cinematic experience. 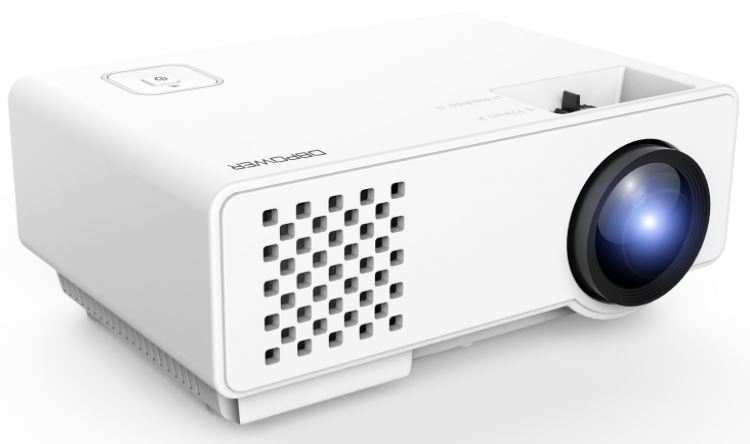 The DBPower RD-810 has a sleek, simple design, and appeared well-made. It also definitely has the kind of dimensions that make it very portable. It comes in either white or black, measures in at 6 x 8.2 x 2.6 inches and weighs just 2.18 pounds. To give you an idea of just how portable it is, you could likely fit it in one hand if you needed to move it from one end of the room to the other.

The layout is also extremely basic and intuitive. On the front of the projector you’ll find just the lens and a small checkerboard-style vent that we assumed was installed to prevent overheating. The top is equally as simple. It contains a dial to adjust focus as well as keystone correction, the DBPower logo, as well as a clearly labeled power button with an LED light. There certainly aren’t a lot of bells and whistles on the outside, but we found this to add a higher level of convenience, mainly because it meant that it wouldn’t be confusing or difficult to set up. 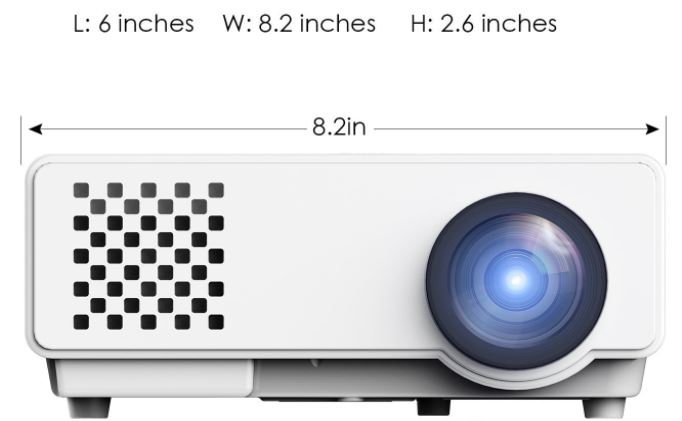 Most of the exciting components could be found on the back panel. You’ll find a ton of different connection ports, including a USB port, an HDMI port, a headphone jack, an AV plug, an infrared LED and last but not least, a VGA port. There’s also a power switch as well as a plug to insert the power cord. Just by looking at the connection ports alone, we were really impressed by the amount of versatility it seemed to have. There wasn’t much we could think of that couldn’t connect to it.

It’s worth mentioning that the bottom of the projector has five, short rubber feet that keep it from sliding when you place it on smooth surfaces like cabinets or shelves. The only thing we thought was missing was a built-in stand. Many similar projectors have small, adjustable stands built into the bottom portion that allow users to change the projection angle. You could put something under the projector if you really wanted to aim it higher, but it would likely reduce stability. It was only a minor downside, but we still would have liked to see some type of built-in support. 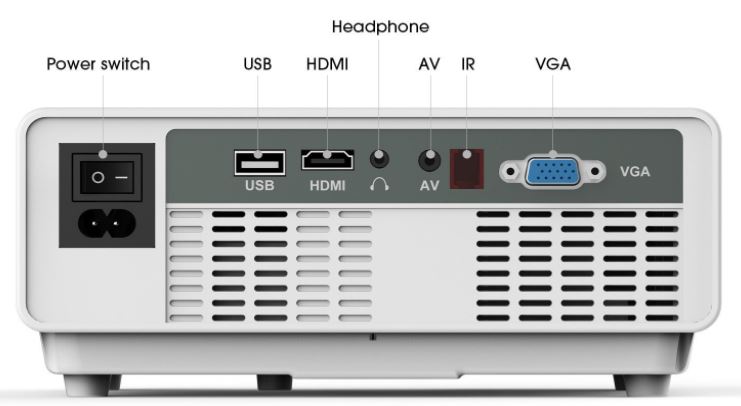 The DBPower RD-810 is outstanding when it comes to compatibility. Not only can it be used to play movies and view photos, but it can do so from a variety of different media players due to the large amount of ports on the back of the device. Specifically, the ports allow you to project media from smartphones, HD set-top boxes, laptops, USB drives, gaming consoles like the Xbox 360 or Playstation 4, computers and tablets.

The DBPower RD-810 had some impressive specifications, but didn’t totally blow us away with anything out of the ordinary. It has a brightness of 1200 lumens which, for the price, is acceptable, but there are certainly more expensive, more powerful projectors available.

It boasts a contrast ratio of 1000:1. For those that don’t know what contrast ratio means, it denotes the ratio of light reflected from a solid white image to a solid black image. In the case of the DBPower RD-810, the white images will be 1000 times brighter than the black images. Again, this capability was good considering the price, but other, more expensive projectors can have contrast ratios of up 10,000:1.

It has a native resolution of 800 x 400 pixels and a supported resolution of up to 1920 x 1080p. This maximum resolution won’t make much of a difference if you’re trying to watch any video files with a 4K image resolution, but for most standard HD videos it’ll do just fine. 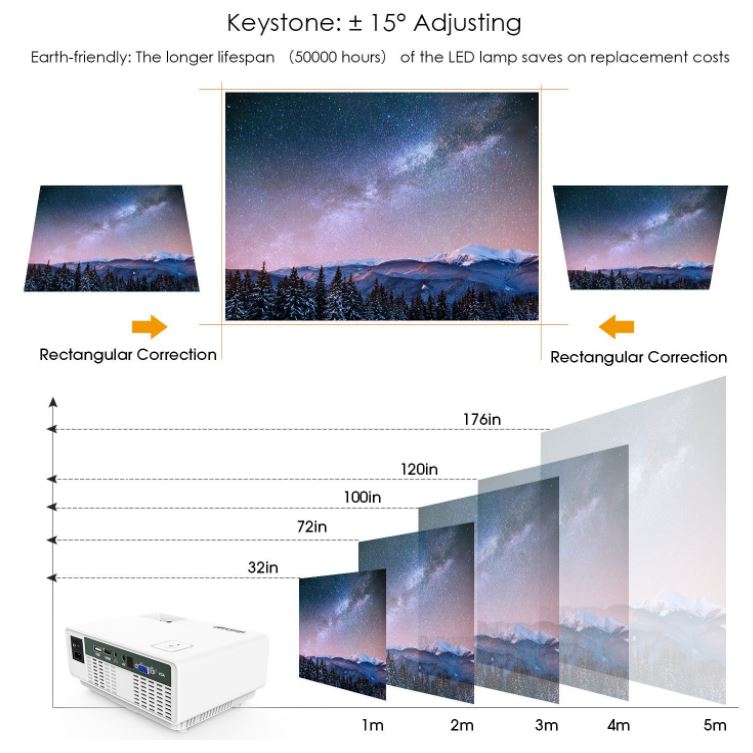 When it comes to adjusting the shape of your image, you’ll find that the projector has a manual keystone correction of plus or minus 15 degrees. This essentially refers to the amount that you can adjust the shape of an image to fit a projection surface. For example, if a projected image is not perfectly rectangular you’ll need to utilize keystone adjustment. It can also project anywhere between 1.5-5 meters away from your desired projection surface and has an adjustable screen size of anywhere from 20-150 inches.

The projector also comes with a remote that was basic, clearly labeled and easy to use. It was a nice addition, and almost didn’t feel totally necessary if you think you’ll be mostly playing media off of a phone, tablet or DVD player that already has a control of its own. Still, for turning the projector on and off, it did make things a bit more convenient, especially if you plan on mounting it somewhere far away from your viewing area.

Based on its specifications and features, we found the DBPower RD-810 to be the kind of projector that would work in medium to large rooms. The keystone correction feature made it easy to fit to projection surfaces with a ton of different shapes. 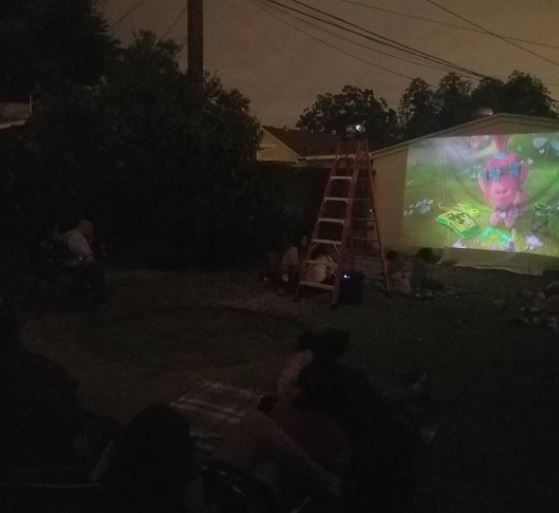 Like most portable projectors, the image quality of the DBPower RD-810 is impressive, but could also be affected by the kind of environment in which you use it. It is capable of projecting in resolutions of up to 1920x1080p, and the projected image had a lot of sharpness and detail with very little distortion. We found that by using a more high-quality HDMI or USB cable, we got significantly crisper images and better projection. 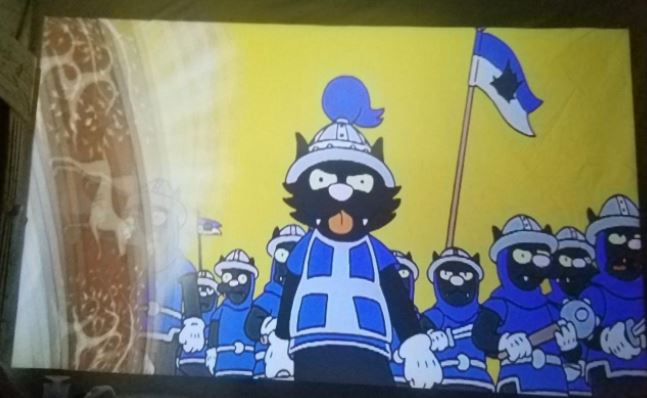 Some colors appeared a little dull at times but this really depended on how much light was in the room. In an extremely dark environment the projector generated stunning color profiles that gave the resulting image a significantly brighter, clearer look. You’ll also want to keep the projector within the recommended range of 1.5 meters to 5 meters; any further than that and you’ll start to see a flatter, softer image with less detail. 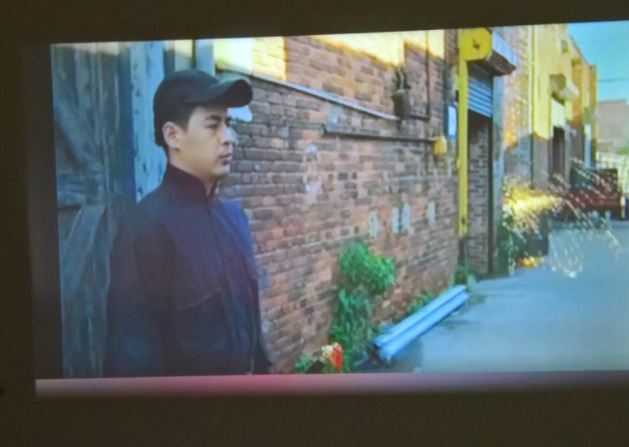 Despite being relatively well-made and having some useful features, the DBPower RD-810 did have a few downsides. First of all, it doesn’t support Dolby Digital. If you try to connect something like your Apple TV, Firestick, or a Blu-Ray player that uses Dolby, you won’t get any sound at all and will have to turn Dolby off in order to play the audio.

It wasn’t a huge issue, especially since there was a headphone jack that you could technically plug a small speaker into for better sound. It just would have been more convenient for the projector to be able to handle Dolby even if there was only one built-in speaker.

We also really would have liked for there to be an included stand. The way the projector is set up only allows you to project images horizontally unless you prop it up somehow. Had there been a small adjustable stand, it would have made it easier to adjust the projector for a truly customized viewing experience. Many similar projectors have a component like this and we were a little bit let down to not find one. 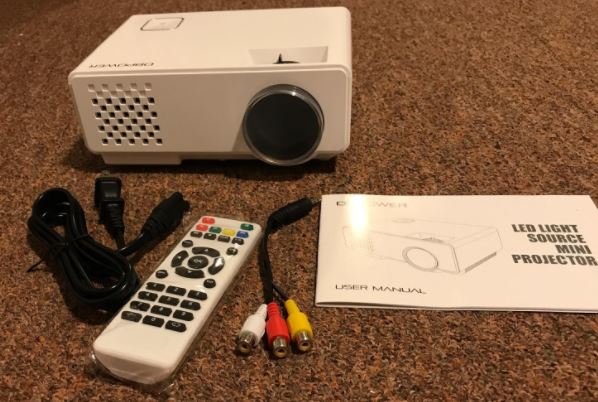 The DBPower RD-810 is certainly a powerful projector and comes at a very affordable price. We found the compatibility to be excellent, the video quality to be sharp given the right conditions, and the design to be sleek and portable. It does have a few limitations when it comes to audio, and if you really want great sound you may have to purchase an external speaker, but luckily there is a headphone jack built in.

All in all, it isn’t the kind of projector you’ll want to use if you’re planning an important presentation. However, for the average gamer, movie or TV buff on a budget, it’s definitely worth considering.