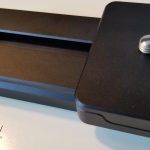 Motion is essential for creating a good video. After all, that’s what separates video from a still image. But motion is about more than just your subject moving. It also means moving the camera itself. Obviously, this doesn’t mean that the camera should constantly be in motion in every video. That would be nauseating. But movement does add life to a video. This is particularly true for time lapses, or for videos where the subject is mostly still. Want to capture the beauty of a placid forest meadow? Please do! But it’s more engaging if the camera is doing a slow pan.

Today, we’re going to be looking at the Smartta SlideMini 2 Motorized Camera slider. Let’s be clear about what this is. It’s a slider. It moves your camera in one direction, automatically. This is not a gimbal, which are designed for capturing action shots. It simply moves your camera from side to side, up or down, in one smooth motion.

The purpose of a camera slider is to get the smoothest pan possible. As such, they’re generally used at slow speeds. At high speeds, shakiness is simply less of a concern. Camera sliders are used mostly for slow panning shots and time lapses. These are applications where even a little wobble can be problematic. So, the number one requirement for a slider is that it needs to move smoothly. But what else does it need to do? We’ll take a deep dive into the features of the SlideMini 2. We’ll look at everything from the physical construction to the battery life. Then, we’ll be able to render a final verdict. Let’s begin! 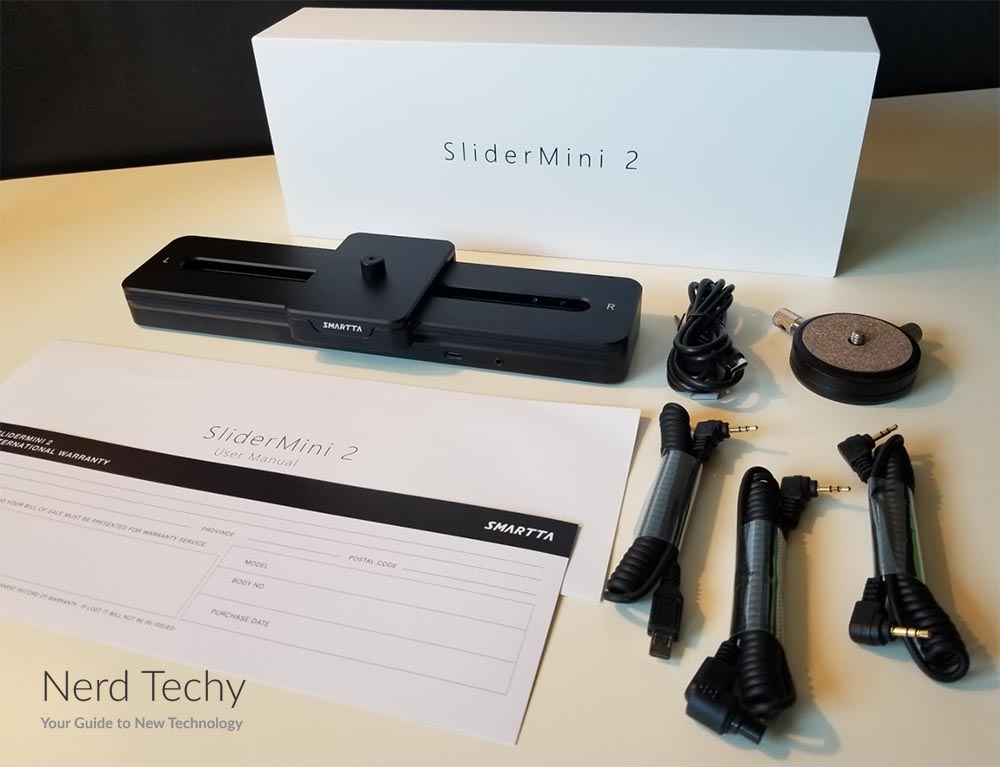 When you look at some affordable video equipment, you see cheap plastic parts. There’s none of that to be found here. The SliderMini 2 is constructed from durable aluminum, so you don’t have to worry about damage from everyday use. It has a black anodized finish, which is resistant to corrosion and scratching. As its name implies, it has a relatively small form factor. At 10.2 inches long, it’s small enough to toss in any camera bag. And at only 20 ounces, it doesn’t add a ton of extra weight to your load.

The design itself is understated, because there’s really not much to it. Most of the unit is a wide, flat rail with a small groove in the center. This groove measures 20cm (about 7.87 inches), and provides the length of travel for the tripod head. On the left side of the rail, you’ll find a power button, which can be tapped to perform a few basic functions. This doesn’t offer the same amount of options as the phone app, but it’s good for grabbing a quick shot. Near the power button, there’s a row of four small green LEDs that indicate the current battery status. They can be tough to see in daylight, but they get the job done.

On the broad side of the slider, you’ll see the USB Type-C charging port. Next to it, there’s a shutter release port. Several cables are included in the kit, so it already works with the most popular camera types. If you prefer a third-party cable, they should work fine. Just ensure that the cable isn’t fat enough to obstruct the slider. Putting the port on the narrow side of the slider could have avoided this issue, but that’s a minor quibble. 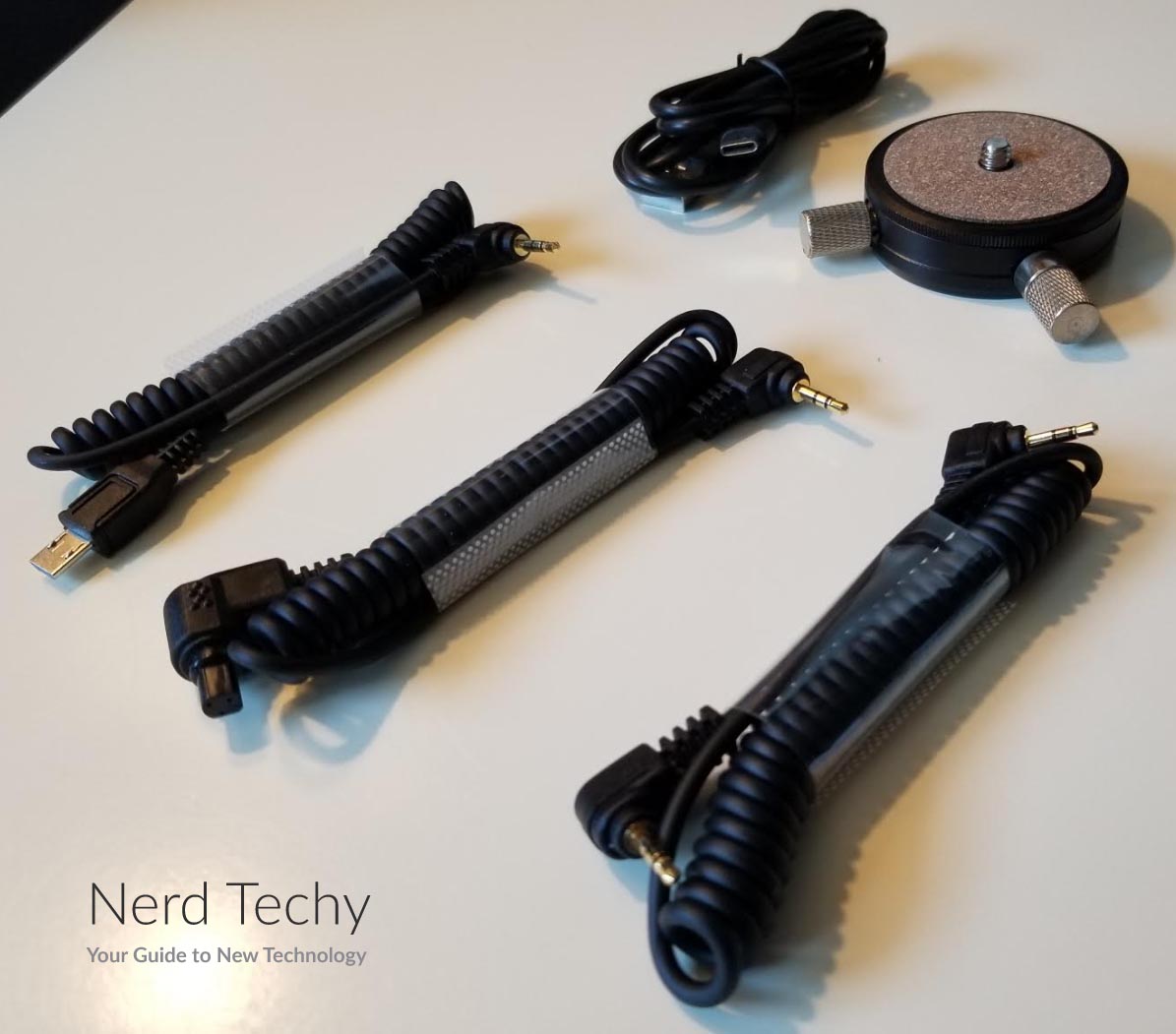 On top of the frame on either side, you’ll see white “L” and “R” markers. These aren’t there in case you forget which side is left or right. They’re there to ensure that when you choose “left” or “right” in the app, it’s the real left and right. On top, there’s a square platform with a ¼-inch tripod thread mount. Keep this measurement in mind. If your camera doesn’t have a tripod head, you’ll need one. And if the head uses a different threading, you’re going to need an adapter. You’ll also want to make sure that knobs, dials, and other parts of your tripod head have enough clearance. This is a common issue with any camera slider. It really comes down to what equipment you’re already using and how many adapters you’re going to need.

One thing we should point out is that the compact design can be problematic for larger cameras. If you’re using something like a DSLR, you’re probably going to want some added stability. In this case, simply mounting the SliderMini 2 on a tripod is an effective solution.

Operation and Ease of Use

When you’re considering any piece of filmmaking equipment, you first have to consider what you’re trying to achieve. A tool that’s perfect for one purpose can be ill-suited for another. The SliderMini 2 is capable of moving a 33-pound load across a horizontal surface. When oriented vertically, this shrinks to 2.76 pounds. At any angle in-between, the weight will be lower as the angle gets steeper. 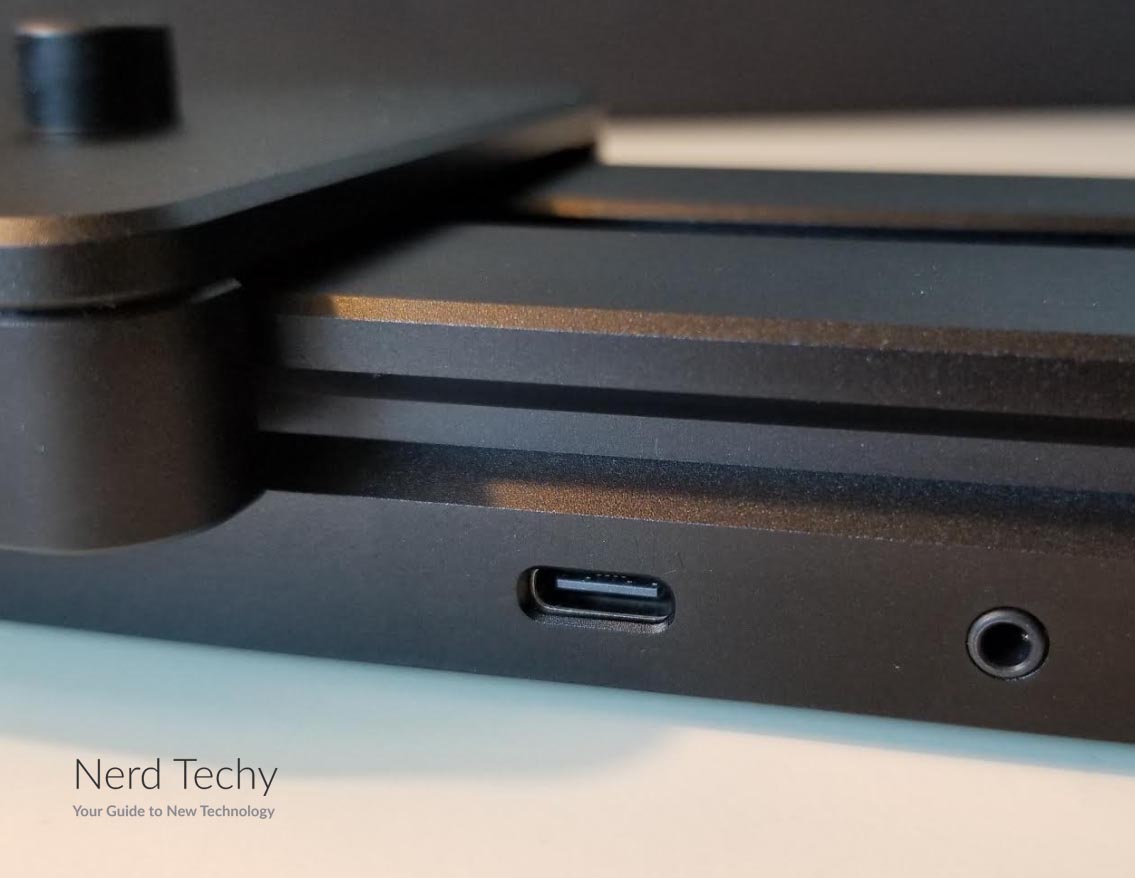 This is not a hard and fast limit. It’s more or less a grey area. As your camera approaches the weight limit, the video will start to wobble just a tad. The higher the zoom level, the more noticeable this is. In other words, what cameras will work best is a bit of an open question. It depends not just on how heavy the camera is, but also on how high the zoom is. Heavier cameras still work very well at wide focal lengths. On the other hand, tighter shots might need correction. We found some wobble, but nothing that the Warp Stabilizer effect in Adobe couldn’t fix. Regardless, keep in mind that this is a mini slider. Lightweight cameras and lenses are better. 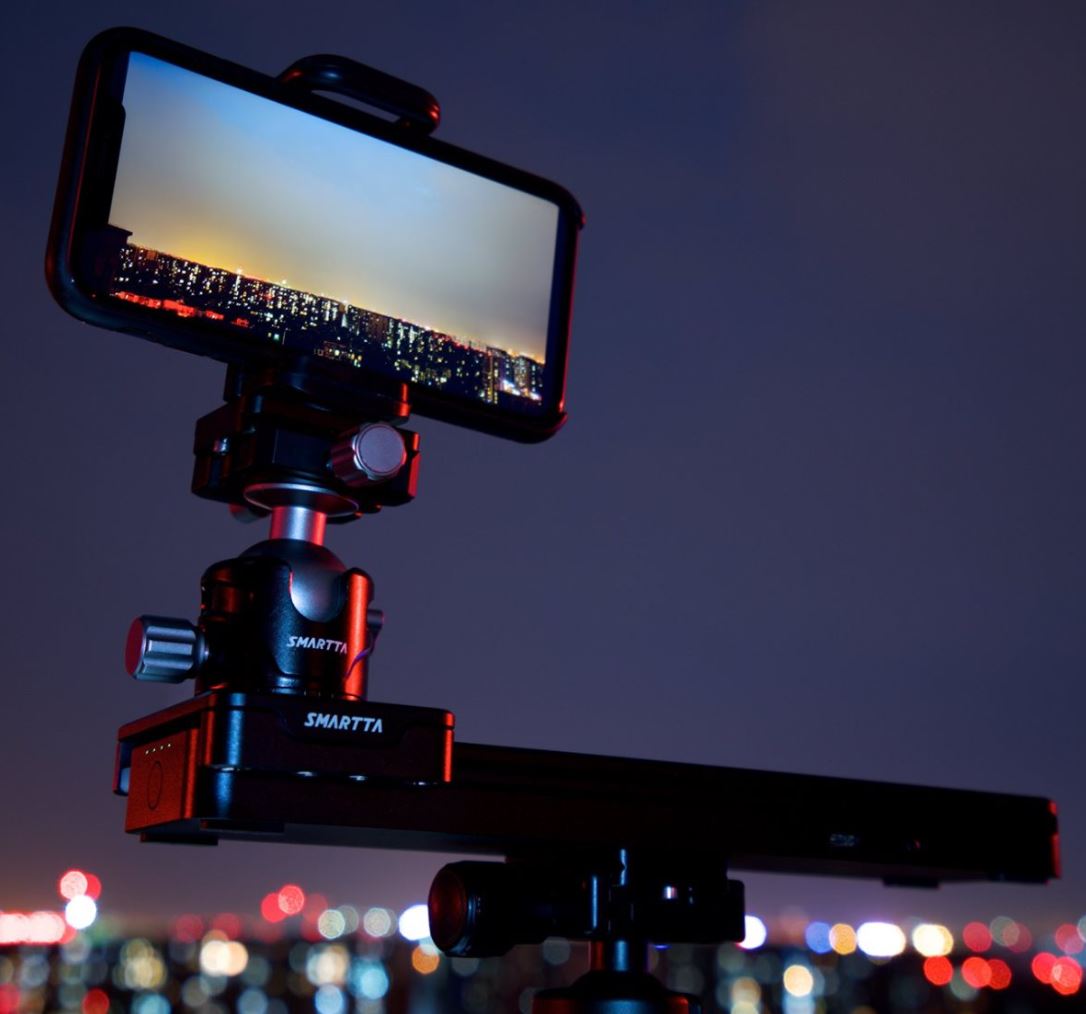 As long as you’re within the weight limit, the SliderMini 2 works very well. The movement is surprisingly fluid, regardless of your tracking speed. You can adjust the speed anywhere from 0.1mm per second up to 10mm per second. This wide range supports everything from ordinary slow pans to very slow time lapse shots. As a bonus, the motor is fairly quiet. This may or may not be a concern for you, but it’s definitely on the soft side. Obviously, the volume is going to depend on how quickly you’re moving the camera. It will also get louder if you use a very heavy camera, since the motor will start to come under some strain.

If you want to get the most out of the SliderMini 2, you’ll want to download the companion app. It’s available for free on the Apple Store and Google Play, and it takes just a couple of minutes to install. It’s not strictly required, but it unlocks some extra features. In addition, it’s very easy to use, so the learning curve is minimal. 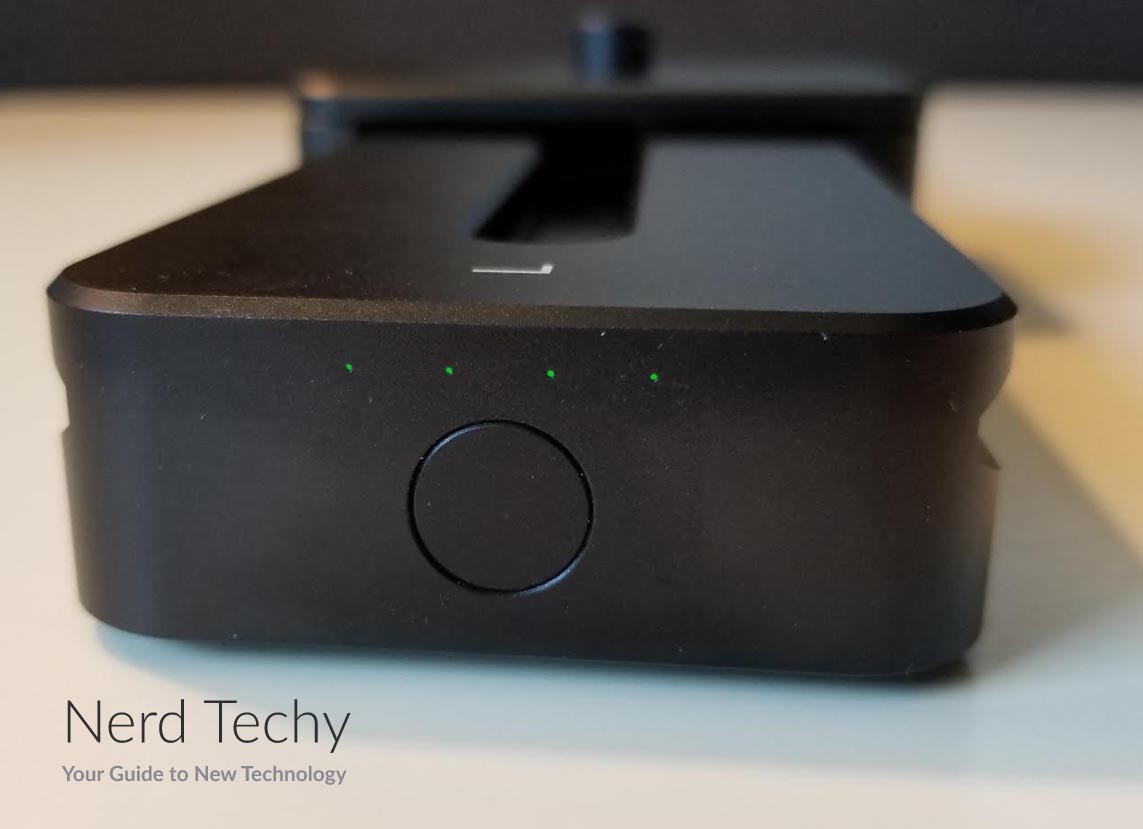 Perhaps the main benefit of the app is the ability to set a custom speed. You select a speed, and the screen will display how long the movement will make. This is a fantastic feature if you have to do a shot of a certain length. Instead of doing any math, the information is right there on the screen. For example, at 100 percent speed, the slider will take 20 seconds to make a full move. You can also set speed curves, where the camera speeds up or slows down as it moves.

Time lapse and stop motion modes are also very helpful. There are a number of pre-sets built in, or you can create custom profiles. Keep in mind that both of these modes require the use of a shutter release cable. That way, the SliderMini 2 can snap individual frames at the required time. Finally, there’s a loop mode, where the camera keeps moving from side to side. This is useful if you’re running a multi-camera setup and just want to have some movement in the shot. 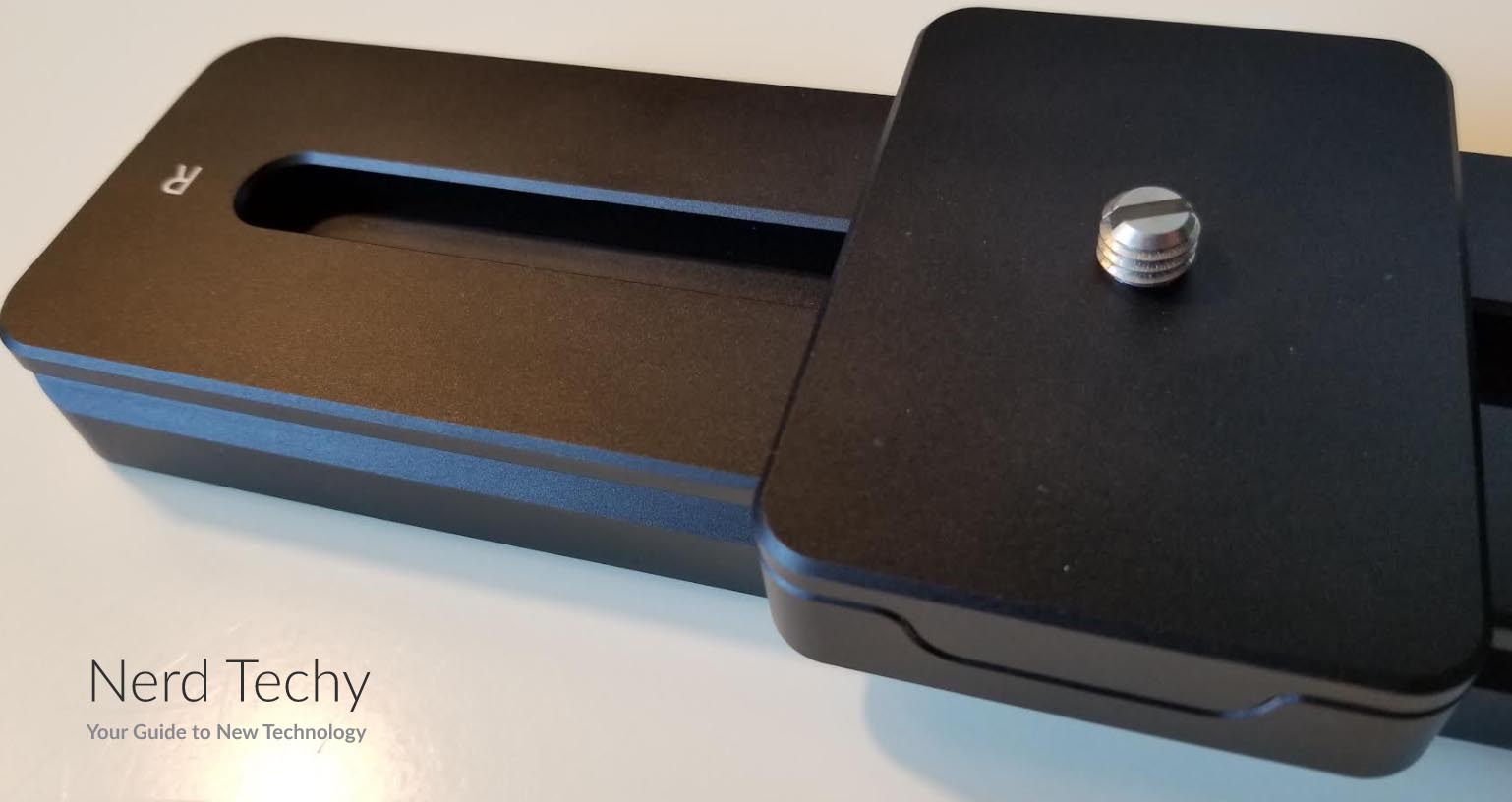 The SliderMini 2 has a battery life of up to 52 hours. However, this just means 52 hours of being turned on. When it’s actually sliding, it will move for up to 14 hours. This is enough to film several shots, even at the slowest rate of movement. When you’re done filming, the SliderMini 2 will fully charge in about 90 minutes. You can film all day, plug in in the evening, and get right back to filming in the morning. If for some reason you need more battery life than this, the slider can be used while it’s charging. That said, the batteries can’t be swapped out, so you’ll need to plug in before they go totally dead.

As with any time we talk about battery life, keep in mind that these times are highly variable. There are so many factors influencing battery life that it’s impossible to make an exact prediction. Regardless, you’re looking at more than enough battery life for most purposes.

The Smartta SliderMini 2 is one of the better motorized camera sliders on the market. Let’s be clear, this is a small slider. It’s not made for long-distance pans. It’s designed for short pans, ideally for wide, slow shots. For this purpose, the slight amount of wobble we found was fixable, but it’s important to keep in mind that the SliderMini 2 does have some limitations.

That said, if those limitations aren’t a problem for you, it has a lot to offer. For one thing, it’s very durably constructed, far more so than we would have expected. The aluminum build is nice and sturdy, and can accommodate even a large camera without much trouble. Not only that, but the long battery life is ideal for making long time lapses.

At 14 hours of continuous use, you could quite literally pan all day without any trouble. With the app, you unlock speed curves, time lapse mode, and stop motion mode. Add to that a wide range of speeds, time display, and several presets, and you’re looking at the complete package.