TechGuru May 2, 2018 Audio, Speakers No Comments

When you’re choosing speakers, you generally want to go as large as possible. Bigger speaker designs are capable of housing larger drivers, and more of them. One consequence of that is you often can experience fairly steady improvements in sound quality as the physical size of speakers are increased. In other words, the difference between a 4-inch speaker and a 6-inch speaker isn’t simply that one takes up more space. All other things being equal, you’re going to end up with measurably better sound out of the 6-inch device.

But nearly everyone seeking Bluetooth speakers will value portability to some degree. It’s just a question of how much you’re personally willing to carry and handle, in other words, how much portability you’re willing to sacrifice in the pursuit of higher quality sound. And on that continuum, Sony’s SRS-XB31 is dead in the middle. 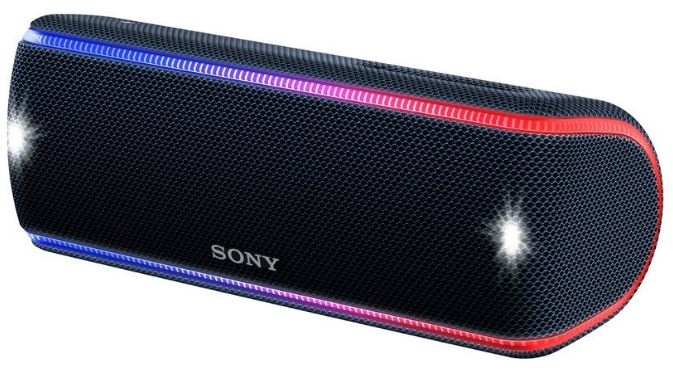 But that doesn’t mean the XB31 is lacking in strong features. The entire SRS-XB series has a number of strong shared features, most notably their ability to connect with up to 100 speakers through Sony’s wireless party chain app. That means even if you’re not terribly impressed with simulated surround sound, you can always upgrade your setup to allow to get the real thing. And the daisy-chain feature works with the other versions of the SRS line of speakers, so if you want to add an XB41 or XB21 to the chain, it’s easy to do.

Like all of Sony’s new SRS-line speakers, the XB31 has an IP67 waterproof rating. If you’re not familiar with the IP system, 67 is one of the highest possible consumer protection ratings. It means this speaker isn’t just protected against dust, humidity, and minor splashes. It sealing is actually so strong that you can place the XB31 directly under a hose, or even immersed in water up for up to one meter in depth. Generally speaking, speaker equipment doesn’t tend to be especially vulnerable to falling damage, but it’s nice to know the XB31 is equipped to handle short drops as well.

Before you take your new speaker and dunk it underwater, you’ll want to make sure all its ports and covers are closed. And you won’t want to start adding other chemicals to the water, either. Even something as simple as dish soap may help loosen chemical bonds in the water enough to make your device more vulnerable. Waterproof rating or not, it’s still a good idea to exercise common sense when you’re using the XB31 around water. 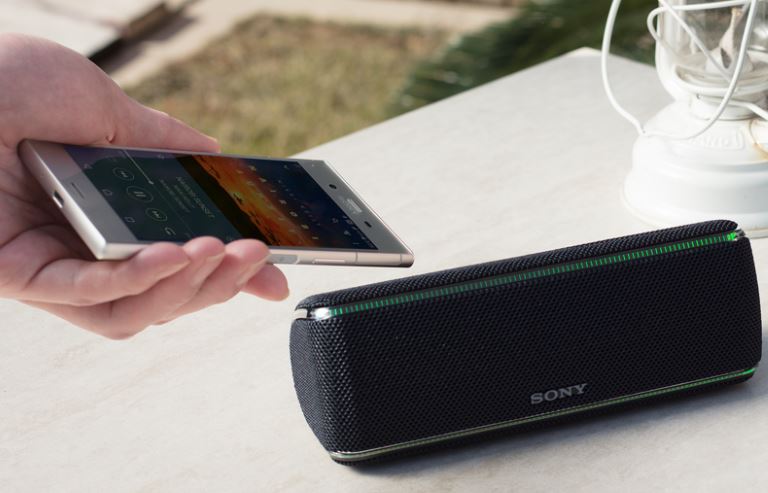 Another thing that the XB-31 brings to the table that’s widely overlooked by similar waterproof speakers their rustproof design. If your speakers are going to get wet as a course of action, you don’t want to end up with ugly oxidized scarring across them in the form of rust. The XB31’s rustproof design will help keep them looking great, even when they’re well-worn.

Inside its body, you’ll find two large 48mm drivers, which are 6mm larger than those used in the SRS-XB21. These modestly sized drivers allow the SRS-XB31 to provide a greater depth within their soundscape than the SRS-XB21. That depth extends to nearly every aspect of their performance, from all the individual tones to the maximum volume output. What makes those slightly larger drivers possible is a slightly larger body for the speaker. 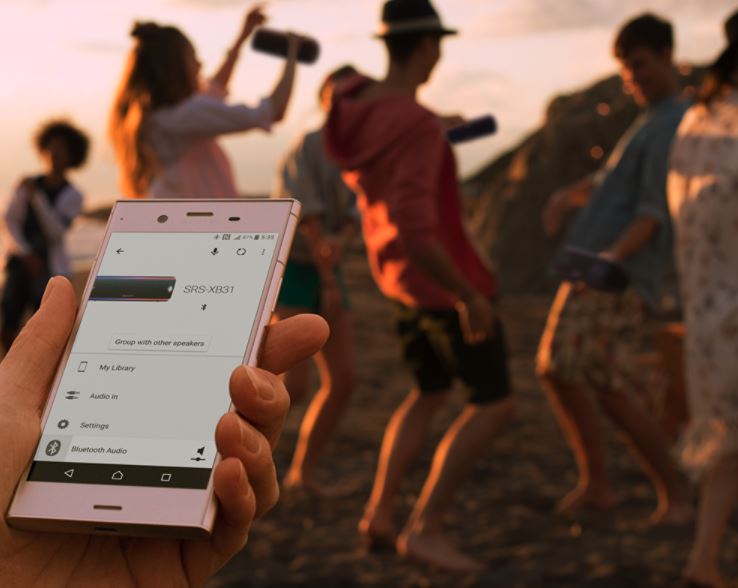 Having a cool-yet-professional aesthetic has been Sony’s signature look for some time. The SRS-XB line of speakers leans more towards the cool-side of that spectrum. Like the other members it the SRS-XB series, the edges of the XB31 are lined with strobe-empowered multicolored LEDs. Those lights come with the standard range of controls you’d expect, which can be customized either directly with an analogue button, or indirectly through Sony’s free app.

If you’re used to working with LEDs, then you’ll find the customization of these lights is somewhat limited. There are a handful of common lighting modes, like a strobe mode, but no option to build your own lightshow from scratch. But it’s easy enough to toggle through the most important settings, like the color palate, so the lack of deep customization will be missed by few.
The body of the XB31 is available in black, red, white, and blue. Those colors match up most of Sony’s existing products, so matching tends to be easy. But if you think you might end up getting more than one speaker in the SRS-XB and you’re worried about matching, you should keep in mind that the 41 isn’t available in white. 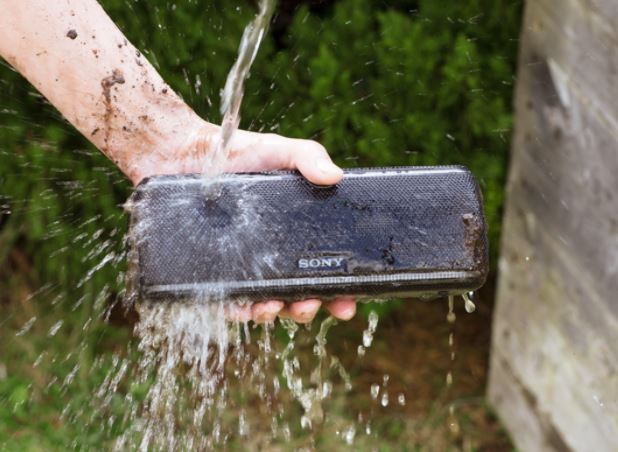 Portability is a tricky balance for Bluetooth speakers. In most cases, you want them to be portable enough that you can pick them up with one hand and still walk around comfortably. But in the interest of sound quality, bigger tends to be better. That’s particularly true with bass tones. Although the SRS-XB line of speakers do have decent-sounding bass tones, those tones are ultimately restricted by limitations pertaining to their size and available power.

The SRS-XB31’s dimensions are roughly 9 x 3 x 3-inches, making it small enough to fit inside most bags, but a bit on the lengthy side. Sitting at nearly 2lbs, the XB31 weighs almost twice as much as the SRS-XB21. In other words, it’s lightweight, but sooner or later you’re going to want to set it down. The lengthy design of the XB31 might end up challenging shallow pockets and smaller purses, but it’s fair to say it’s otherwise a highly portable unit.

Relative to its size, the XB31’s bass tones are somewhat above average. In a side-by-side comparison with the SRS-XB21 and SRS-XB41, it would be easy to hear the gradual improvement as you continued through each model in the series. In other words, the XB31 has clearly stronger bass than its SRS-XB21 counterpart. And its slightly larger drivers allow it to enjoy similar improvements in its mid-tones and high tones. While the XB31 may not be quite as portable as the SRS-XB21, every bit of portability it traded was exchanged for gains in sound quality. 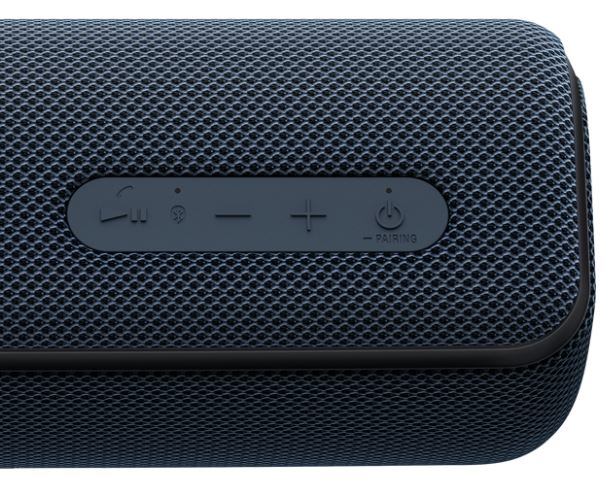 Like the other models in this series, out of the box, the XB32 has fairly high boosted bass. But it takes only a few minutes to crank that bass up or down to match your preferences within Sony’s equalizer app. There’s only so much you can expect without a subwoofer, but if you come to the XB31 with realistic expectations, it’s easy to be impressed.

Another thing to note is the Live Sound mode. Most of the time when you’re only using one front-facing speaker, it means you can forget about even simulated surround sound. But the Live Sound mode of the XB31 paired with its angled drivers allows this speaker to produce a quality of surround sound that typically takes least two separate units. It’s not quite authentic surround sound, but it’s certainly more than you’ll find on similarly sized Bluetooth speakers. And if you’re ever looking to achieve more authentic surround sound, it’s incredibly easy by connecting the XB31 up with another speaker. 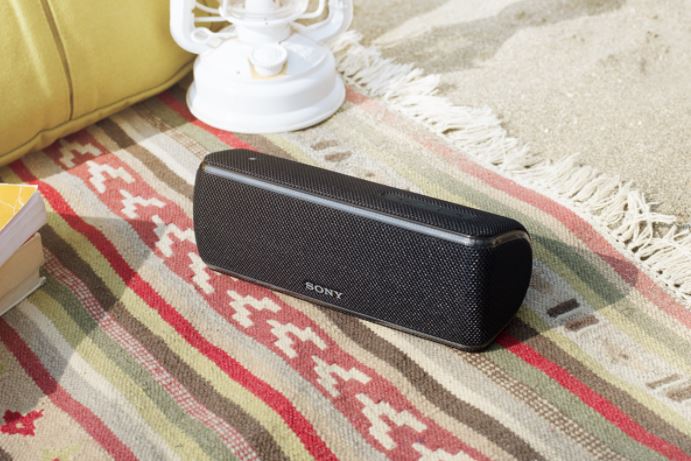 Like all models in the series, the XB31’s battery life is rated to last for 24 hours of constant use. Whether or not you end up with 24 hours of play largely depends on the types of audio you’re playing, and the volume levels that you’re using. But even if you crank the XB32 to maximum volume and keep it playing perpetually, it’s easy to expect a full charge to last you through a full day. For a party-oriented speaker the XB32, that should be more than enough time.

One thing that many users will be tempted to try is disabling the LEDs entirely to conserve battery life for sound. But it should be noted that the LEDs operate with on such little power that you’d only be able to squeeze seconds of battery life without them. If nothing else, that means you can enjoy the cool LED aesthetic without feeling guilty about them draining the battery. 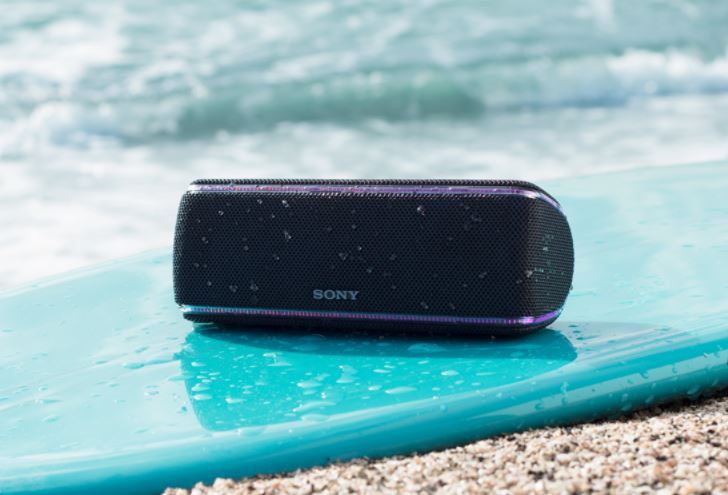 Who Should Choose the SRS-XB31?

If you’re choosing a Bluetooth speaker, then portability is probably a big concern for you. The Sony SRS-XB31 is a middle point between two extremes. You may look at the XB31 and wish it weighed one pound less, or was two-inches smaller. In that case, what you want is the SRS-XB21. But unless you specifically need something that small, you’re going to be better off with the XB31.

If you were to chart portability against sound quality, the most economical point on that spectrum would be the XB31. At no point does the XB31 at risk of feeling large and unwieldy, which may start to be the case if you make a speaker even slightly larger than this. Yet it would feel at home in many circumstances where portable speakers would normally feel underwhelming. While you might want to stop short of using them as the speakers for your primary entertainment system, they’re a good choice for nearly anything short of that.

The XB31 has nearly every high-end feature you see on the XB41. It’s got a rugged waterproof design, rigorous software support through Sony, and all the customization options that make the SRS-XB line so great. For someone who needs a moderate degree of portability, but isn’t willing to go as far as the larger XB41, it’s an excellent choice.