These days, AV receivers have a much tougher job than they did 20 years ago. What used to be a simple box that took quiet sounds and made them loud is now the centerpiece of your home entertainment system. This hardware takes all of the video and audio sources and rebroadcasts them in the highest quality possible.

It’s very possible that your current receiver works fine. But there is one problem. With the launch of 4K Blu-Ray and modern encoding formats, there is a lot of high end video and audio technology hitting that market. If you want to take advantage of these features, you need a receiver that can support these technologies.

The STR-DN1080 is a reboot of one of Sony’s bestselling amplifiers with one key upgrade – it now supports Dolby Atmos. Atmos is a new audio format on the market. Although it’s been around for about a year, this 7.2.1 channel audio system has historically only been available in elite amplifiers. Some have called the STR-DN1080 the “people’s Atmos,” as it makes the technology accessible. 7.2.1 channel audio can be re-broadcasted over your existing 5.1 system. This improves the sounds presence and accuracy, without forcing you to upgrade your speakers. When you do feel it’s time for an upgrade, your Amplifier is up to date and ready to go.

The question is, can this affordably priced receiver keep up with the higher end models? Or is it leaving something on the table. Let’s take a look and find out.

For decades, receivers have kept the same basic look – a black box. Sure, there were variances. In the 90s, manufacturers crammed as many buttons as they could onto the face to show off all the features they had. In the early 2000s, front facing AV ports and beveled knobs became common place. But overall, every new model was just a slight variation of the same theme. But when we first opened Sony’s latest receiver, we were pleasantly surprised.

There is nothing that immediately jumps out at you. But the entire system looks very modern. It has sharp edges, straight lines, and precisely shaped buttons. The row of buttons directly below the LCD blend into the system. If you weren’t looking for them, you almost wouldn’t notice they were there.

The whole thing just feels a little minimalist. There is a strong air of intent in the face. The less buttons there are, the more important each of their functions is. You get the idea that it’s easy to use, which we found to be true.

With this Atmos enabled receiver, you can connect up to 9 different speakers. You can have 7 speakers and 2 subs, 8 speakers and one sub, or 9 speakers and no subwoofers. The receiver gives you connections for up to three analog composite video inputs, each with their own set of stereo RCA connections for analog audio. You are also given two additional analog outputs, for older amplified speakers. This will be most common with subwoofers, for users who have had the same hardware for a while.

As we move into digital connectivity, this is where the receiver will really begin to shine. There are connections for both RCA and Optical digital audio, with one connector for each format provided. There are six HDMI inputs, and two outputs. These can be configured as you see fit. For example, you can use the rightmost HDMI port for video passthrough, in order to feed the video to your television. You can swap between the primary and the secondary output, which is ideal for anyone who wants to use a secondary screen such as a projector.

You are able to connect to your home network through either Ethernet or WiFi. 802.11ac access is provided, which is currently the fastest networking standard available.

If you do connect your amplifier up to your home network, you’ll enjoy the benefit of having it integrated with your Google Home system. Since this receiver is able to control every component of your home media center, you’ll be able to automate this along with the other smart devices you own. 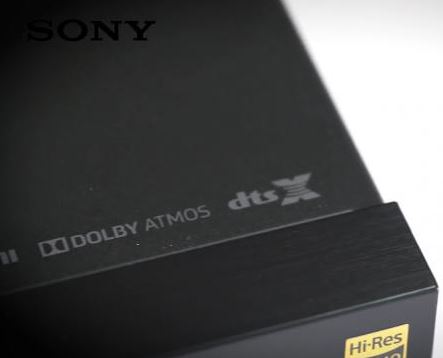 If you’re not familiar with the Atmos system, let’s go over what it does and why this is so revolutionary. Standard audio is Stereo. This uses two speakers, each which have their own audio track. Because there can be slight delays or variances in each of the audio channels, stereo lightly replicates the way that our ears hear sound. It might feel like sound is coming from somewhere other than one of the two speakers. This is called imaging.

5.1 channel audio is much better at imaging. You can feel as if sound is coming from behind, or to your side. But even 5.1 channel audio uses a single separate track for each speaker. So there is limitations.

Dolby Atmos doesn’t break sounds up by the track, but the location. It’s mathematically calculated. They might have the sound of a train. It starts behind and to the right of you, and quickly whizzes past your head. The job of the receiver is to calculate the actual position of the train, and decide which speakers the sound could play back on. If you were to listen to an Atmos encoded track on the exact same 5.1 setup as a standard 5.1 audio track, you’d find that the Atmos system was much more realistic.

The system becomes even more impressive when you start to add in additional speakers. We were fortunate enough to test out a full 7.2 system. That’s 7 speakers, and two subwoofers. The results were incredible. The sound seems to extend beyond the speakers themselves, coming from various parts of the room instead. 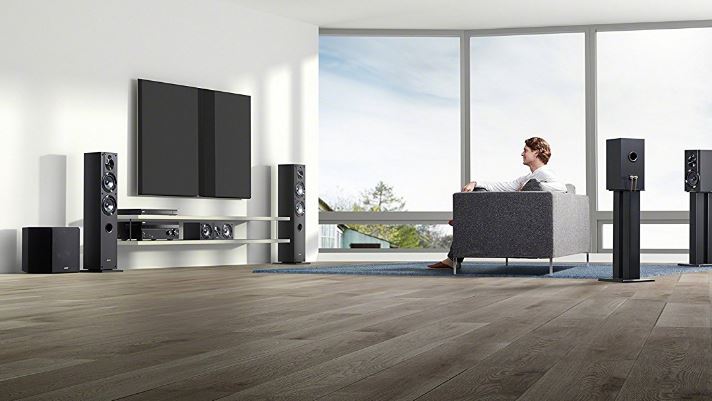 Now that we know how Atmos performs, it’s time to take a look and see how each individual speaker does. This amplifier can pump out 165 watts per channel into a load of 6 ohms. Ohms is a measure of the resistance of the speaker. The higher the resistance, the harder the amp has to push to get the power through (so to speak.) Most compact bookshelf speakers are 6 ohms. But some of the larger floor standing models are 8 ohms. This means that you could see a 25% reduction in power when using full size speakers.

As long as your full size speakers are around 125 watts maximum, and your satellite speakers are under 165 watts, you should have more than enough power with this amp. We were using full size Klipsch speakers, and they absolutely sung. As is true with most home theater amplifiers, the sound is very neutral. They feel powerful, precise, and well balanced. This amp would pair nicely with an equally designed set of speakers – meaning we’d recommend using proper home theater speakers and not just your standard music speakers.

That being said, they are still capable at performing well at lower power levels. Don’t think that you have to get a set of high end speakers. There definitely will be an improvement, but this amp is equipped well enough to take pretty much anything that you throw at it. 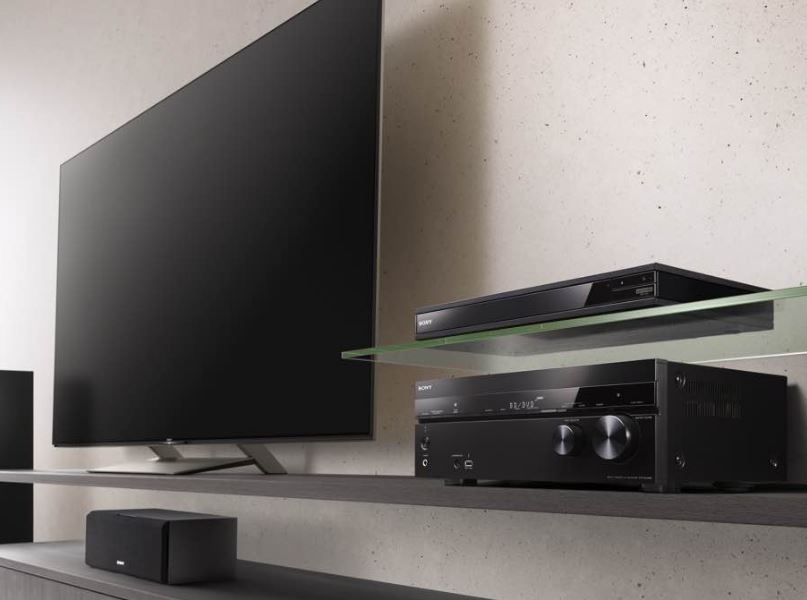 Even though there isn’t much of an interface, there is still a tiny little processor inside there. These days, we’re used to transmitting our audio digitally. This means that we need an amplifier that can support all of the common codecs. In this area, Sony didn’t disappoint.

If you’re connected to a wired or wireless network, you’ll be able to stream to your hearts content. It’s able to connect to Spotify, Google Cast, and SongPal. SongPal is Sony’s own proprietary system, and is useful for setting up multi-room audio. You can use SongPal with most Sony audio products, including the just released XB30 Bluetooth Speaker.

If direct connection to your favorite apps isn’t available, you can still stream through DLNA, Airplay, and Chromecast. These three standards are open, and supported by most hardware on the market. At the end of the day, you should be able to stream whatever media you have available.

They say that the mark of a truly good audio system is that it’s transparent. And we couldn’t think of a better way to describe Dolby Atmos through the Sony STR-DN1080. We didn’t hear individual speakers, we heard the sound as if we’d been picked up from our room and plunked down in the center of the scene of the movie we were watching. During this experience, the nuances of the system never stand out. It’s just you and the sound.

I’m sure that many of you can recall the same feeling when you tried out surround sound for the first time. That’s the nature of technology. Until you’re used to it, you can’t help but think to yourself “How will we ever top this?”

It’s that very feeling that drives audiophiles to upgrade to $60,000 systems. The desire for something unbelievable. For most of us, this isn’t something we can experience every day. But once in a while, a new technology comes out that, at least for a moment, experience that same sensation.

The STR-DN1080 isn’t the first receiver to include Atmos, and it certainly won’t be the last. But for now, it’s one of the best values in the industry. You’ll be able to try this technology out without upgrading your existing speaker set up. Once you are read, the additional outputs are ready and waiting.

This audio format isn’t going away anytime soon. In fact, it’s about to become the new standard. If you’re looking to stay up to date, this is the most accessible way to do so.