Sony is one of the biggest names in home theater. Their product lines range from televisions to audio equipment, and everything in between. But even if you’ve got the best home theater on the market, you’ll still need to use the latest and greatest video format if you want to make the most of it.

If you own a 4K TV, you’ve likely been involved in a long patient wait for content. There was even a time where the first 4K Blu-ray movies were available on store shelves, but manufacturers had yet to release a player that could support that format.

While the wait is over, buyers are still expected to pay a pretty penny for compatible players. The Sony UBP-X800 is about to change all that. When first announced, it was clear that Sony intended to make their primary player, offering a balance between affordability and feature set. Now that it’s finally here, we took the opportunity to go hands-on and see if this is a worthwhile upgrade.

Although the external case shares some design elements with their top of the line 1080p Blu-Ray player, there are several key features that make it stand out. Sony’s main objective was to make a player that could view content from any source, and make it look as good as possible on any television. In theory, you should be able to throw away every media player you’ve got and replace it with a single unit. Even if you don’t have a 4K TV now, you’ll be able to enjoy your current content to the best of your televisions ability, and upgrade later without any additional expense. 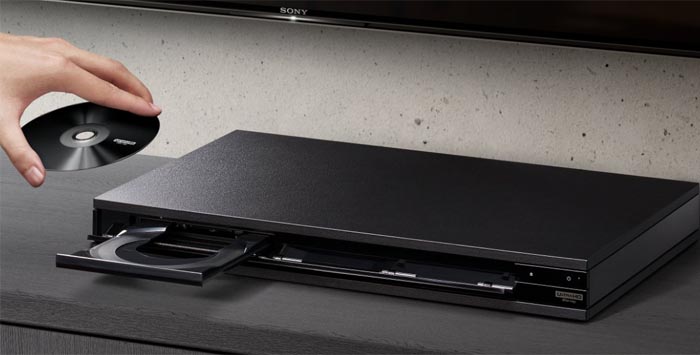 If you didn’t know better, you wouldn’t be able to tell from the outside that this was Sony’s flagship media player. It’s blocky, unobtrusive design allows it to blend into any modern media center. Even if it’s standing alone, it’s minimalist design still allows it to add a slight high-tech flair to the empty space below your TV.

In terms of buttons and connections, Sony kept the design as simple and unobtrusive as possible. There is a eject button on the left, and the disk tray pops out from a hidden section on the left. On the back, you’ve got two HDMI ports, one digital audio output, and an Ethernet port. Despite not giving you much to look at, there isn’t really much else you need.

If you’re a media buff, you’ll be happy to learn that Sony’s iconic support for a myriad of formats has stuck with the UBP-X800. It goes without saying that any multimedia format that includes the term “Blu-Ray” is supported. From the earliest first generation disks to the latest 4K HDR films, everything will work seamlessly.

Still got a stack of old DVDs kicking around? Those work two. Audio CD’s? Check. Super Audio CDs? VideoCDs? DVD-Audio? If you even remember any of these formats, the UBP-X800 will allow you to take a trip down memory lane, as they’re all supported.

But it isn’t just physical media that it can play. The UBP-X800 has all of the software and hardware necessary to enjoy streaming content. You can watch 4K HDR content form Netflix and Amazon Prime. If you’re enjoying any 1080p content, the built in digital video processor can help you upscale it to 4K resolution. 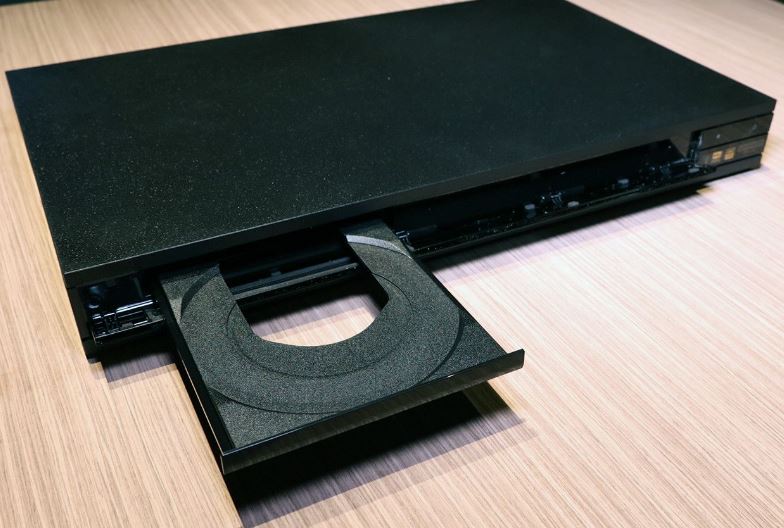 After a lot of careful research, we did find one format that wasn’t supported: Dolby Vision HDR. This is one of the four HDR standards that are available on the market. The others are HDR10, HLG, and Advanced HDR. The differences between these formats is, for the most part, minute. But Dolby requires special hardware and a software license that manufacturers have to pay to use. Your TV has to be Dolby HDR certified, as do your media players. You won’t be able to stream Dolby HRD content from a computer.

Should Sony support this video format? Unfortunately, there is no clear answer. But there is a solution. Sony has all of the necessary hardware to support Dolby HDR, and they’ve stated that they’ll be watching the market. If this becomes a prominent standard in the marketplace, they’ll offer a firmware update to allow this content to be played back. For now, there is not much content available, so we don’t think you’ll miss it. But if you have already paid for a Dolby HDR television, you might want to consider a player that can support the format. 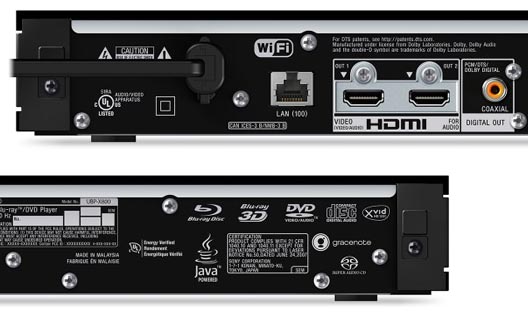 If you have spent serious money on audio gear, you need a serious player that can back it up. Because this player has digital audio output only, the audio quality isn’t quite as important as a player that is converting it to an analog signal. But even though there is no DAC, this doesn’t mean that there isn’t anything that can muck up your audio in the transmission process.

The issues that some players face is a lack of support for codecs. Let’s say you’ve got a high-resolution FLAC audio file with the current maximum level of detail supported by a digital format. This would be 24-bit audio at a sample rate of 192 kHz. If you play this back on a standard player, it will have to down sample this audio format to something it can understand, reducing the quality. Sony advertises the UBP X-800 as having support for high definition audio. What they really mean is that these ultra-high sample rates are supported.

For extremely high end audio setups, you can split the video and audio signal across the two HDMI ports. This is designed to reduce noise and interference. You’re going to need a pretty serious home theater system to notice a difference, but the option is there if you need it. 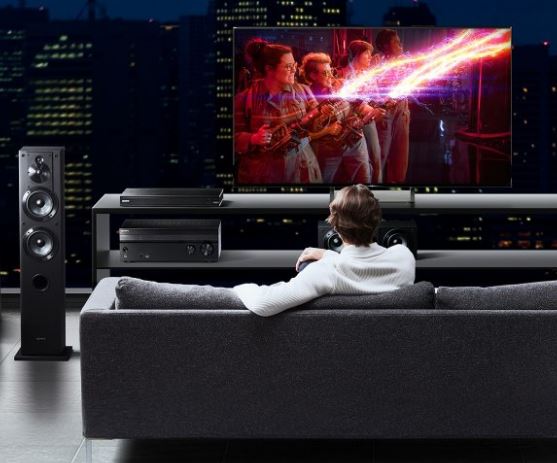 It might seem a bit odd to review a video player without spending significant time on the video quality, but in today’s climate it doesn’t matter. As long as it supports 4K UHD content, it can transmit this signal to your TV with zero loss. The player isn’t designed to modify the signal in any way, so the picture quality depends entirely on your television.

But there is one area where the player does have an impact on quality: scaling. Whether you’re upscaling 1080p content to 4K, or downscaling 4K content for use on a standard HD TV, the UBP-X800 does a great job. We noticed (with other players) that 4K content tends to look a little over sharpened on 1080p, with slight hints of jagged edges. Sony uses a less aggressive downscaling process, making the content look just as good as standard 1080p content.

Upscaling wasn’t quite as smooth. There is no doubt that 1080p content looked a little better in 4K, but the difference was negligible. If you really want to see what this player has to offer, you should use it primarily for 4K content. 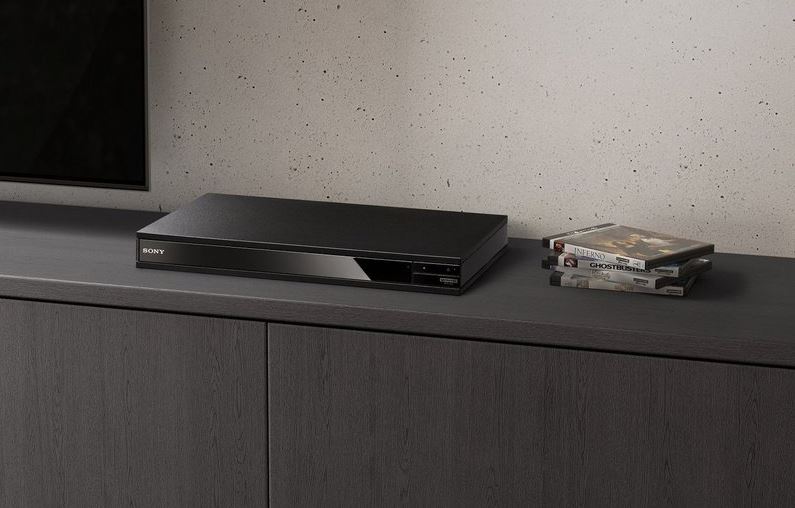 There is no doubt in our mind that this is the best 4K UDH Blu-Ray player on the market, but this does come with one drawback: the price. For the same amount of money, you could get yourself an Xbox One S, and have the ability to play games. You would lose some of the high-resolution audio, and there are circumstances were the video wouldn’t look as good as it does with Sony’s player. But this does mean that the UBP-X800 isn’t the right choice for everyone.

If you’re looking for an all-in-one device that can allow you to enjoy 4K HDR content from a variety of sources, the Sony UBP-X800 is for you. Heck, if you’re looking for a player that can allow you to play your collection of ancient and bizarre disk-based movie formats, this still might be the player for you. It might not be the cheapest one on the market, but the one thing you can be sure of is that you’ll never find a movie you can’t play, and you won’t have to spend hundreds of dollars on another video appliance any time soon.

You will, however, need the correct tools to enjoy everything this player has to offer. Of course, you’ll need a television. Personally, we would prefer to use the Epson Home Cinema 5040Ube 4K projector. This way, we’d be able to enjoy a 300” screen without taking out a second mortgage on our home. But this is up to you. No matter what source you’ll use, you must have an HDMI cable that can support 4K content. We’ve done a roundup of the best 4K HDMI cables to help you choose.

Even though the television is the most expensive part of your home theater system, it’s important not to skimp on the video sources. The Sony UBP-X800 is a promising player that is compatible with a lot of formats, and would make a great addition to any home theater.