Even the most impressive HD/UHD televisions can have their performance undercut by mediocre sound. Televisions aren’t built to replace speakers, and the speakers installed on them by default are usually scarcely better than the cheapest tech on the market. Even with the small handful of televisions built with stronger than average speakers, there’s a limit to the amount of sound quality you can squeeze out of a thin television.

Those kinds of problems only become more severe if you have any interest in surround sound. Using 5.1 or 7.1 channel stereo systems, you can create a type of immersive sound that can’t be completely recreated digitally. Getting that sound requires you position half a dozen separate units in a circle, all around one central point. But unless you have an entire room to dedicate to building a media center, then you probably don’t have the space involved to set up one of those systems.

And that’s exactly why sound bars are made. They’re built with a thin, compact build that allows them to rest invisibly in-front of your TV. In spite of their small size, they can be built to be nearly as powerful as a full set of tower speakers. People turn to sound bars when they have little space to spare, but they want to get more out of their sound then you can without additional speakers.

Sony’s 2018 lineup of audio equipment includes two new sound bars, the HT-Z9F and the HT-X9000F. The HT-Z9F is extremely high end sound equipment that verges on being audiophile quality gear. Although Sony’s HT-X9000F isn’t quite as powerful, it does have a number of things in common with the HT-Z9F. Both offer support Dolby Atmos surround sound.

If you know anything about Dolby Atmos sound, then you know the true Atmos effect requires you to add more speakers than a 2.1 channel sound bar provides. Fortunately, the HT-X9000F is ready for that as well. Should the day come that you wish to upgrade your sound system, Sony’s X9000F can be extended from digital surround sound to true surround sound with the addition of another set of speakers.

The HT-X9000F has many of the same strengths as Sony’s flagship sound bar. For example, both include the “vertical S” button, which can help deliver a three dimensional soundscape by emulating 7.1.2 surround sound. That allows the HT-X9000F to create a more convincing surround sound by projecting audio vertically. Even without side by side comparison, this feature should go unnoticed by few people.

Much like the HT-Z9F, this sound bar makes use of a number of special play modes you can use to optimize your media experiences. For example, cinema mode alters the soundstage to create an emphasis on immersive, three dimensional sound. The music mode builds on the vividness of your music, helping you hear every detail.

Not unlike the cinema mode, the game mode was made for immersion. But with the game mode, that immersion is the result of the soundstage offering a better sense of distance and motion. The news mode provides a focus on voices, helping you hear them clearly over sound effects and background noise. Although it’s described as being for watching the news, it’s also excellent for people who watch TV with closed captioning due to a mild hearing problem.

And finally, there’s the sports mode. Like the news mode, sports mode is made to emphasize the clarity of voices. That mostly means keeping commentator and athlete voices clear. But you may have noticed nearly all of these modes are focused on providing a greater sense of immersion, and the sports mode is no different. Without blocking voices, it provides extra boost to the ambient crowd noise, with the intent of helping you feel like you’re watching the game in person.

As for whether or not any of these audio modes are any good, it’s largely a matter of taste. Everyone has their own slightly distinct sense of hearing, so the specific boosting and equalizer levels that feel best to our ears varies widely. But with so many audio modes to choose between, most listeners will end up with at least one or two favorites.

The HT-X9000F was built to match the appearance of Sony’s high end BRAVIA X900F TV. The result is a non-descript professional aesthetic that pairs nicely with essentially any large TV. The sound bar itself uses a lengthy 36.6-inch body, standing just over 2.3-inches tall. That build provides a low center of gravity that prevents the sound bar from being knocked over easily.

Most sound bars are built as 2.0 channel systems. After all, the entire purpose of a sound bar is to create speakers that don’t take up much space. But Sony’s HT-X9000F is a full 2.1 channel stereo system, which means it includes its own separate subwoofer.

Like most subwoofers, this one uses a 15 x 7.5 x 15-inch build that’s fairly bulky. But the vertical orientation of the device means it won’t be too difficult to neatly tuck away without losing much space. Additionally, it’s wall mountable and wireless, so it’s not difficult to avoid all of the most common hassles surrounding subwoofers. 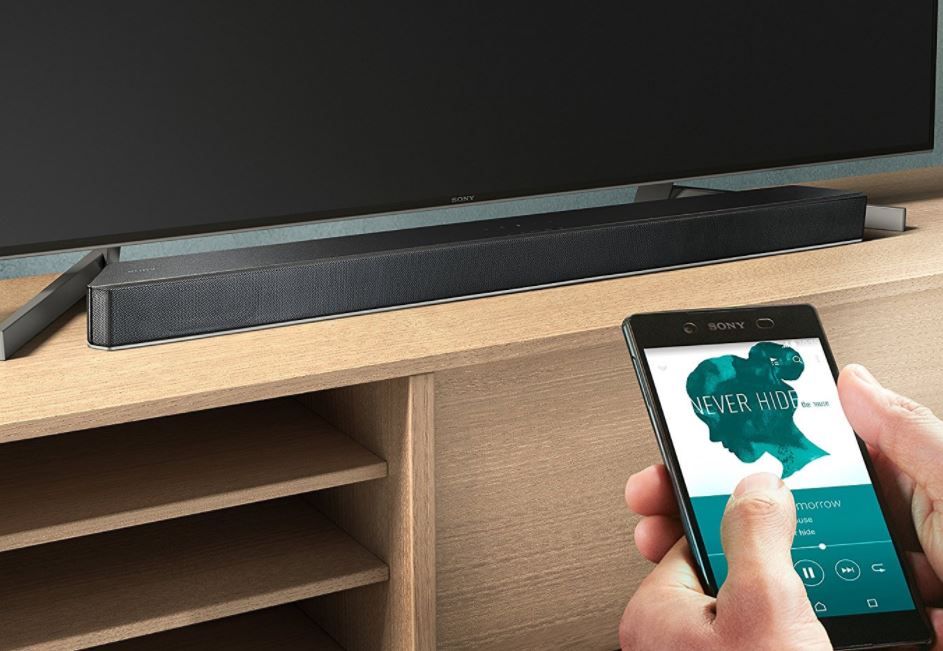 With a sound bar, the sound frequencies that tend to suffer most are bass tones. That’s because strong sound reproduction for deep bass tones is most easily created with large audio drivers inside a bulky casing. That’s why the X9000F decided to include its own separate subwoofer, ensuring you get bass tones much stronger than you’ll see on nearly all sound bars.

And as far as high tones and mid-tones are concerned, the X9000F compares favorably to Sony’s Flagship sound bar, the HT-Z9F. That’s no doubt because both bars use much of the same technology. If you ignore their virtual surround sound capabilities, the two provide almost identical sound quality.

As far as loudness goes, the X9000F has a maximum power output of 300 watts. There’s no direct correlation between how loud speakers are and their wattage, but the two are usually closely connected. And certainly in this case, the wattage is fully reflective of how loud the HT-X9000F can become. It’s not quite loud enough to fill an auditorium, but it’s more than enough for larger living rooms.

Unfortunately, there aren’t many connectivity options for the X9000F. The best way to connect is wirelessly through Bluetooth, but you won’t find an Ethernet port or Wi-Fi. Neither will you find an NFC button for one-press Bluetooth connections. But in the case of television speakers, NFC isn’t much of a loss.

Fortunately, there are a few more options for physical connections. On the backside of the sound bar, you’ll find a USB port, as well as two HDMI/HDMI ARC ports. The USB port is somewhat picky. It supports most common audio file types, including wav, flac, mp3, ogg, AAC, and several others. But more obscure file formats remain without support, which might be a problem for certain types of audiobooks and podcasts. 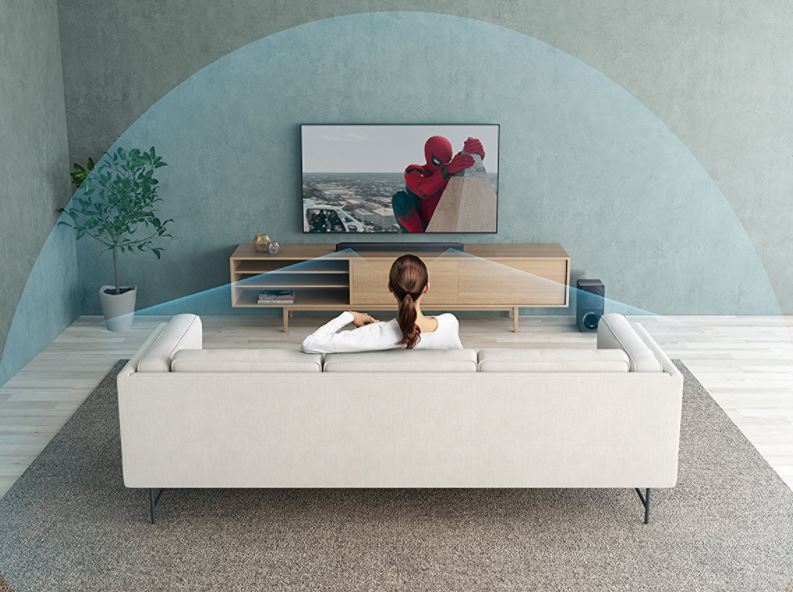 Digital surround sound may not be something you enjoy, and the day may come when you want the real thing. Whether you find yourself with more space in your home, or you’re just looking to make an upgrade, it can be important to look at whether or not your sound equipment is expandable.

The X9000F doesn’t have the same level of versatility you’ll find on the higher end Z9F. You can’t create a multi-room wireless connection, and you can’t connect through Wi-Fi. Moreover, the X9000F is picky about its compatibility. While it’s possible to add Sony’s SS-CSC speakers, you can’t implement any other speakers within those audio channels. Once you buy a Sony sound bar, there’s a good chance you’ll be locked-in with Sony products.

Turning to the USB port, you should know that not all types of USB devices are supported. You have to consult Sony’s manual for a complete list, but the majority of unsupported devices are either very old or very obscure. As long as you’re not using any unusual devices, you shouldn’t end up running into any issues with the USB connection.

As far as extras go, the X9000F doesn’t include anything noteworthy. You get a remote, batteries to operate the remote, and one HDMI cable. That’s nothing to write home about, but at least you have everything you need to get started out of the gate. 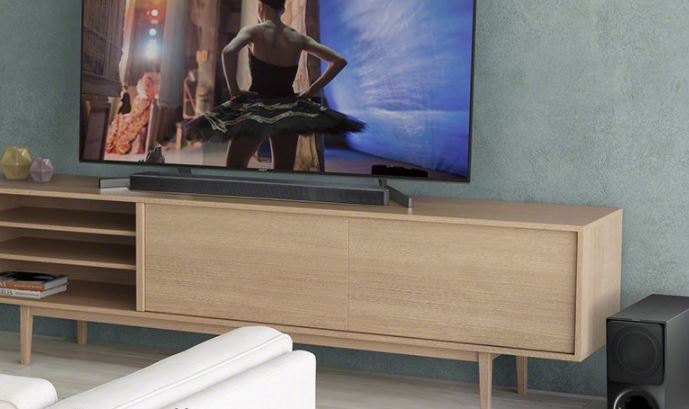 Among mid-ranged sound bars, Sony’s HT-X9000F is on the top of the heap. It supports many of the same advanced features you’ll find on Sony’s best equipment. The faux surround sound isn’t as sophisticated as what you’ll see on the best sound bars in the world, but it’s definitely enough to surpass anything you’ll see on a 2.0 channel system.

When you sign up for a sound bar, you’re making a compromise. You can’t achieve true surround sound, and bass tones tend to suffer. In exchange, you don’t have to store a shedload full of speakers in your living room. The X9000F gives you the best deal on that compromise. With its independent subwoofer, you won’t have to sacrifice booming bass, and you won’t have to endure a low quality sound stage.

If you’re looking for high quality sound in a compact form, then the X9000F is a great choice. Suffice to say, it can do far more than your television speakers will ever be able to do. The level of immersion it provides comes eerily close to a real cinematic experience. Ultimately, the HT-X9000F is a 2.1 channel sound bar, and there’s only so much you can squeeze out of a 2.1 channel system. But with its ability to be upgraded to full surround sound, the X9000F is a great choice for anyone seeking compact speakers around this price point.