Some say the only certainties in life are death and taxes. In the world of electronics, we have another sure thing. After the innovators come the imitators.

There’s nothing really wrong with this, it’s just a fact of life. Once one company takes a bold step in a new direction, others watch the reaction of the market to decide if this is a new trend or a swing and a miss. This iteration helps consumers as often the first company to market doesn’t have things perfect the first time. Healthy competition keeps prices down and drives innovation ever forward.

Early Bluetooth specifications had significant limitations on the data transfer rate which limited use to basic peripheral devices or headsets that didn’t demand much audio quality. As Bluetooth matured, the ability to transfer stereo audio changed the game, and further improvements in transfer rate, connection reliability, and lower power usage continue to drive adoption.

While Bluetooth headphones have been around for well over a decade, it wasn’t until the launch of Apple’s AirPods that most people ever considered truly wireless, Bluetooth earbuds. While previous products generally had a cord or bar to connect each earpiece, the impossibly small AirPods met much criticism but pushed the market in a new direction. They may have been the first major player to fully cut the cords on their earbuds, but other manufacturers haven’t wasted much time bringing their own variations to the public.

SUDISER looks to capture a piece of the new truly wireless trend with their 316TS True Wireless Earbuds. Let’s see how the sound compared to the competition. 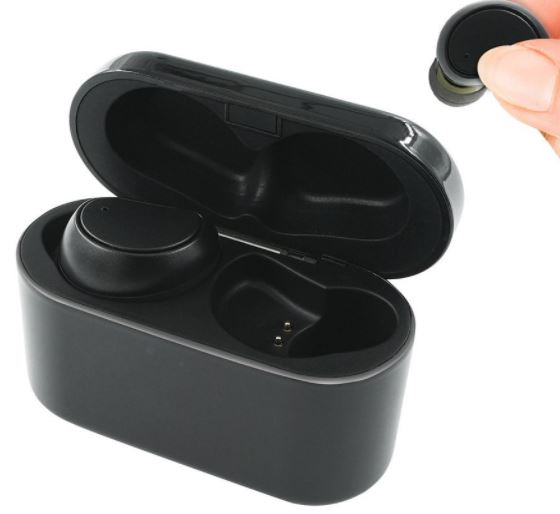 We’ve seen a lot of wireless earbuds in recent months from a host of different manufacturers with varying sizes and designs. The SUDISER Earbuds set definitely lands on the smaller side, a plus for those who prefer less prominent earbuds.

The earbuds feature a matte black plastic finish and each has a round silver button on the exterior. It’s a clean, subtle design that won’t draw much attention regardless of the environment in which you wear them. Unlike some wireless in-ear headphones, the 316TS doesn’t include any additional arms or clips to help secure to your ear. While this allows for a small size and clean design, it also relies on an extremely good fit inside your ear canal to maintain fit, especially during active use.

SUDISER dubs this pair the “Mini”, and they certainly do mean it. Each earbud weighs less than 0.2 ounces and even with the case, total weight is only 4 ounces. While this isn’t quite as small and light as Apple’s AirPods which weigh 0.14 ounces each, it’s not much heavier. 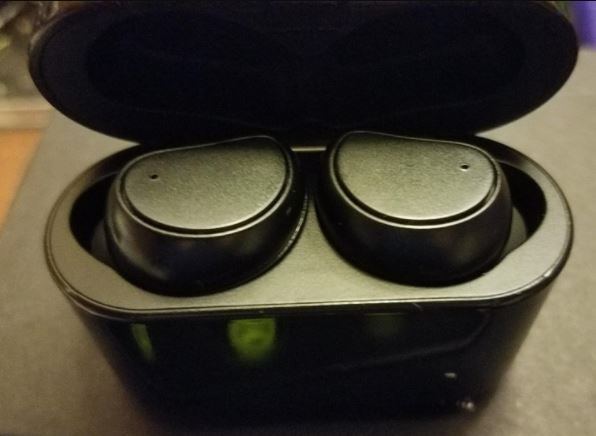 Included with the earbuds, three separate earpiece sizes allow you to select a precise fit. SUDISER says that the ergonomic design will snugly fit in your ear without hurting even with extended use.

Overall, the SUDISER true wireless earbuds have a very small, compact size and professional look. In fact, though it’s a matter of personal preference, we prefer the mature black and silver stylings from SUDISER over the glossy white AirPods or bulky designs of some other competitors.

Aside from the fact that the 316TS is a set of wireless earbuds, there aren’t many other special features to uncover. 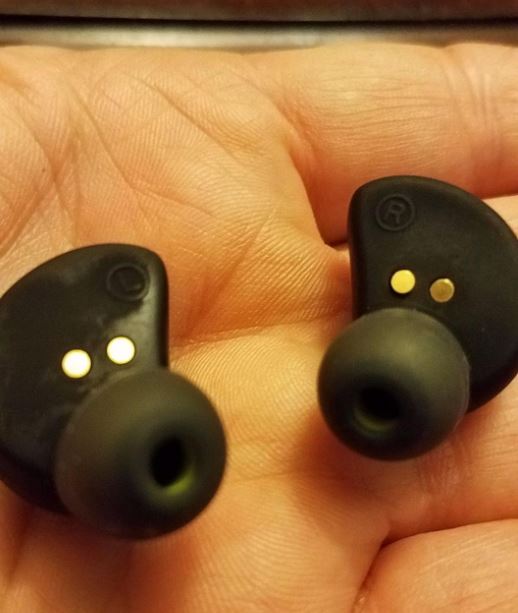 Standard with most Bluetooth headphones, the 316TS uses Bluetooth version 4.2 resulting in an estimated range of 33 feet. They also include a microphone to enable hands free calling from your smartphone. SUDISER specifies that while both earbuds can playback audio, only the left earbud engages in phone calls. If you like to share earbuds with a friend, you can both hear music but only the person with the left piece will hear calls.

Beyond the size and fit, most people want to know about battery life next. Given the tiny size, nearly all wireless earbuds deliver less than spectacular times before needing to recharge in the case. The 316TS’s batteries land around the middle of the pack compared to similar competitors.

SUDISER claims the earbuds last “up to 3 hours” on a full charge, but anyone familiar with battery powered electronics knows it’s rare to achieve the manufacturer’s claims during real-world usage. Fortunately, with a relatively large 500 milliamp hour hour battery inside the case, you should receive up to 4 complete additional charges. With 5 total charges, you could theoretically reach up to 15 hours of total play time, although given the 2 hour charge time, you’d need 8 hours of charging to reach this goal. 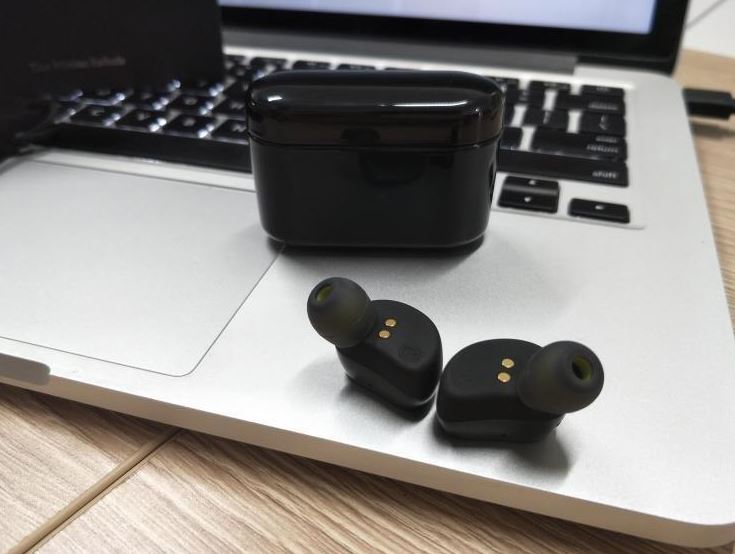 The 316TS’s “One Key Design” provides simple convenience for managing your music and calls. A single click can control music playback as well as answer and end phone conversations.
SMARTOMI makes no claims about water or impact resistance, so it’s safest to assume the 316TS wasn’t designed with additionally durability measures. If you’re concerned about moisture resistance, you may want to consider a water resistant option like the Bose SoundSport Free.

While SUDISER may not have any “Wow” features up its sleeve with the 316TS, it matches up well with other wire free headphones. This is in itself impressive given that they costs significantly less than many of its competitors.

Wireless earbuds aren’t terribly complicated pieces of tech to use, but definitely involve more than the old days of plug and play headphones.

Though the instruction manual provided by SUDISER was a bit difficult to read, we didn’t have much trouble pairing the 316TS to our smartphone and tablet. We did confirm that only the left ear piece functions during phone calls. While it would be nice to have stereo calling, it isn’t especially bothersome not to have it. After all, we’re all accustomed to talking on phones on only one ear. We did appreciate the design of the charging case. Each earbud has a small opening in the plastic for metal charging contacts which match up with 4 prongs in each ear piece receptacle. A magnet in the case pulls each piece in with a satisfying snap that lets you know they’re seated firmly and charging. A blue LED in the center of the case will illuminate to indicate that charging has commenced successfully.

We’re a bit torn about the fit of the ear pieces. First, we do appreciate receiving multiple sizes of ear tips to help find the correct fit. Also, fortunately for us, we have relatively small ear canals. As a result, we were able to achieve a secure fit despite the fact that SUDISER did not add any elements designed to secure or stabilize them inside the ear. According to the reports of some reviewers with larger ears, even the larger sized tips weren’t enough to obtain a secure fit. It’s something to keep in mind if you have larger ear canals although most people shouldn’t encounter any problems.

Ultimately, while the 316TS felt secure and snug during general use, we wouldn’t feel exceptionally confident engaging in strenuous activity like working out, hiking, or jogging. If you’re planning to sit, walk, or other similarly calm actions, you should find the fit suits your needs well enough. 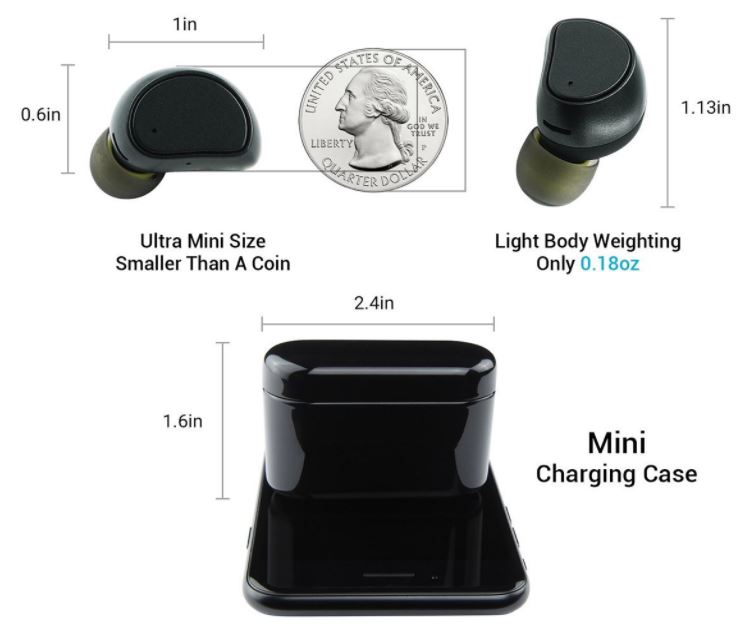 Since the 316TS comes in as about the lowest cost wireless earbuds we’ve ever reviewed, we chose to keep our expectations fairly low. While we always evaluate the merits of any piece of tech compared to other similar options, it’s certainly important to keep cost in mind. While price isn’t everything, it’s hard to expect any gadget to perform as well as an alternative that costs double, triple, or more.

Also keeping our expectations low, the 316TS only include 6-millimeter sound drivers. Most in-ear headphones feature drivers between 8 and 12 millimeters, so SMARTOMI definitely designed these on the small end of the spectrum.

Though our expectations started low, we were pleasantly surprised to discover the 316TS easily surpassed the sound quality we expected it to produce. Mids and highs were clean and crisp with good volume. Our rock and rap samples were lacking a bit in the bass department, but that’s easy to understand given the diminutive driver size.

Since the ear pieces fit snugly inside our ears, the 316TS did a good job isolating outside noise even though they don’t employ any active noise cancellation measures. This feature helps when listening in louder environments or situations you’d prefer not to have your audio leak out and disturb anyone around you. You do need to exercise caution in situations where you need to maintain awareness, such as crossing city streets.

While these earbuds may not achieve the same audio quality of offerings from Apple, Bose, or Sennheiser, they held their own quite well. 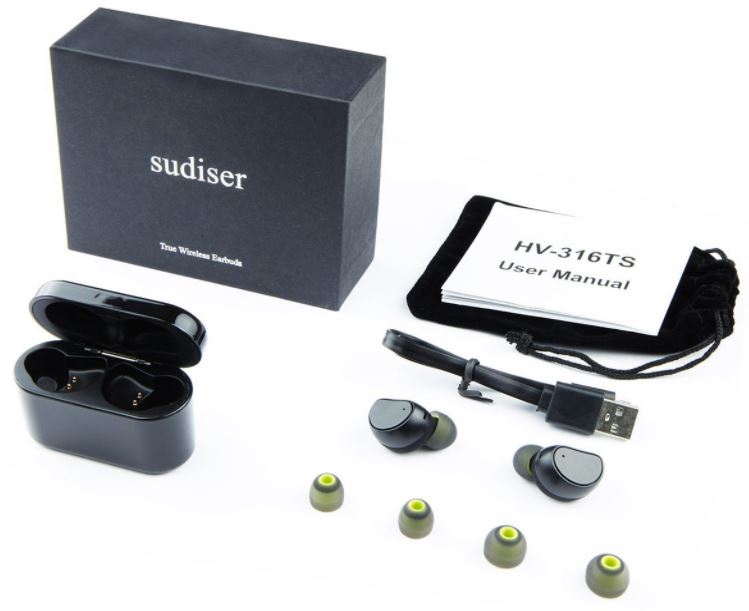 Wireless earbuds still represent a relatively young technology. While both earbuds and Bluetooth have existed for many years, manufacturers have only recently been able to shrink all the necessary hardware and batteries to fit in such a compact package.

Battery life still remains the largest hurdle. The SUDISER 316TS falls in the middle of the pack with 3 hours per charge, and while the case can provide 4 more charges, you have to decide how you plan to use them. If you only need to listen for a few minutes or couple hours at a time, you may not mind having to dock the earbuds frequently to juice them up again. However, if you like to listen throughout the day or while traveling, there aren’t really any true wireless earbuds that will work for you. Even the best in the market can only stretch up to about 5 hours. At a certain point, we’d rather just have a cord than need to constantly worry about monitoring battery life.

However, if you’ve decided that a pair of truly wire free earbuds are right for you, it’s refreshing to have a variety of options. While the “big” manufacturers still charge extremely high prices for their products, the introduction of a more choices from smaller manufacturers will help keep all prices in check.

Of course, this only works if the less expensive options can achieve an acceptable level of quality. The SUDISER 316TS true wireless earbuds deliver a secure fit, acceptable battery life, and sound quality that far exceeds expectations at a fraction of the cost. They make a smart purchase for anyone looking for wire free convenience without breaking the bank.