Nowadays, TV shows and movies have never been easier to access. There are dozens of ways you can watch a big Hollywood blockbuster or your favorite Netflix show that don’t necessarily involve a trip to the movies or even an expensive TV. Smartphones, tablets and computers all enable us to stream the latest and most exciting entertainment and watch it all on the same platform. It’s certainly an advantage, but the fact that things like smartphones, tablets and laptops tend to be personal items made for one user can make it difficult to share your favorite content with those around you.

Surely you can find a quality HDMI cable and hook your laptop or tablet up to a TV for a group watching experience, but you’ll still be limited by the kind of monitor you use. Luckily, there’s a way to recreate the feeling of taking a trip to the movies with your friends and family that doesn’t involve leaving the house.

Portable, in-home projectors have made watching movies with a big theater experience very easy. Many of them can play media from a number of different platforms. Instead of watching movies or TV shows alone on a small screen, you can create your very own movie theater in your house for your friends and family. Best of all, these handy entertainment systems usually won’t empty your wallet. Some are better than others but, in general, they’re becoming a must-have for anyone looking to host movie night in their backyard, living room or home theatre.

In this breakdown we’ll be picking apart one of these nifty projectors and giving it some careful consideration to see if it can hold its own against other entertainment systems on the market. It’s called the Tenker Q5 Mini LED Projector and we’ll be taking a look at its design, its compatibility, the specifications and features, the video quality and even looking for any downsides the projector may have for a fully comprehensive of review of this newly-released alternative to home entertainment. 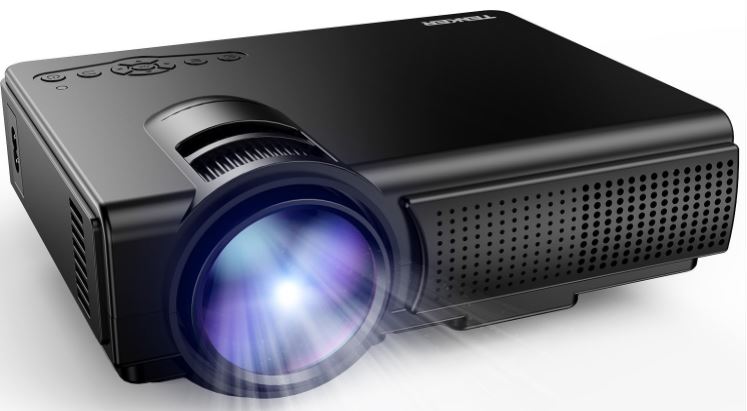 The Tenker Q5 has a simple but stylish design with a very intuitive layout. We found that it was small enough that it could be easily transported if you ever want to take movie night to a different room or to a friend’s house. Measuring in at 7.7 x 5.8 x 2.7 inches and weighing in at just 1.98 pounds, you’ll first notice it’s tiny size.

On the front you’ll find a checkered grill that we assumed was to prevent overheating, as well as the lens. The top has a little bit more going on; you’ll find the focus dial as well as the keystone correction dial as well as a group of control buttons. Specifically, you’ll see a power button, a backward button, four menu buttons, an OK button, as well as two other buttons that weren’t as clearly labeled, but we assumed they’d be explained in the included manual. You’ll also find the Tenker logo in a stylish, futuristic font on the bottom right corner. 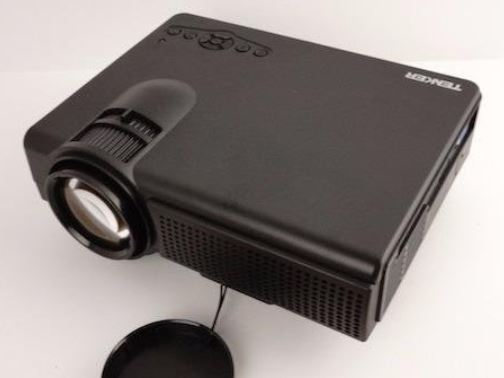 The right side of the projector contains most of the important ports and compatibility features. You’ll notice a headphone jack, AV jack, a TF card slot, an HDMI port, a USB port, as well as a VGA port. Each component was clearly labeled, and had us thinking that it would be extremely useful when it came to playing media from a number of different entertainment platforms. Lastly, you’ll find a plug for the included power adapter as well as an included remote control.

Overall, the design of the Tenker Q5 was very ergonomic, stylish and had a lot of impressive modes of compatibility that gave us some really high hopes for its overall performance. 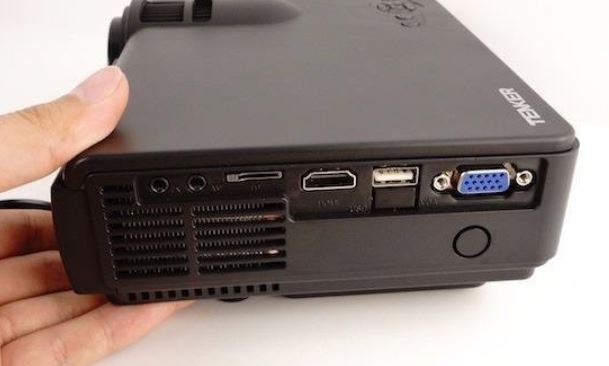 The Tenker Q5 was not only compatible with an impressive amount of media platforms, but could also handle a variety amount of media formats. Because of the impressive hardware contained within, you’ll be able to connect TVs, gaming consoles, laptops, tablets, smartphones as well as play media from TF cards and USB flash drives. For improved sound quality, you can also use the headphone jack to connect any 3.5mm speakers.

In addition to the projector’s broad range of connection ports, it’s also capable of handling a number of video, audio, image and text file formats. You’ll be able to watch MPEG1, MPEG2, MPEG4, RM, RMVB, MOV, MJPEG, DIVX, VOB and MKV video files, as well as play WMA, MP3, M4A, APE, FLAC, and WAV audio files. For still-images the Tenker Q5 can handle JPEG, BMP AND PNG files, and for text, you’ll even be able to view TXT files. We were really impressed with the overall compatibility and found that it had all of the bases covered when it came to both hardware and file compatibility. 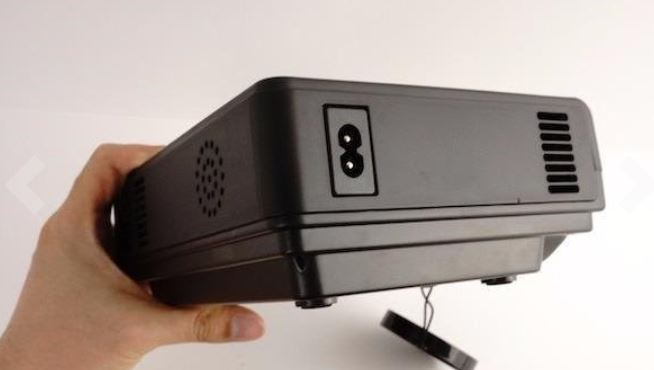 The Tenker Q5 Mini LED Projector has some really impressive specifications given its price, as well as some convenient features that make it real powerhouse for home entertainment. First and foremost, it boasts a projection distance of 3.8 to 9.8 feet and has the ability to project images between 37 to 100 inches. Like most projectors, we found that there was a sweet spot for image quality. In the case of the Tenker Q5, this happened to be at about 6.5 feet away from the projection surface with a screen size of about 60 inches. This combination of image size as well as distance gave us the sharpest picture.

The projector comes fitted with a 1500 lumens bulb, which is slightly higher than some other projectors at similar price points. Some projectors can go as low as 1000 lumens, while other more high-end projectors can have brightness levels up to 3000 lumens. The Tenker Q5 is certainly bright enough to work in dark rooms if your goal is playing videos, but may not be powerful enough for use in business presentations in brighter rooms.

In order for the image quality to be as clear as possible, you’ll need to make sure there are no other lights interfering. While the bulb is powerful, it does have its limitations, making your viewing environment a key factor in its performance. It’s also worth noting that the Tenker Q5 has a lamp life of 20,000 hours, so it not only has a powerful bulb, but it’s also very energy efficient. 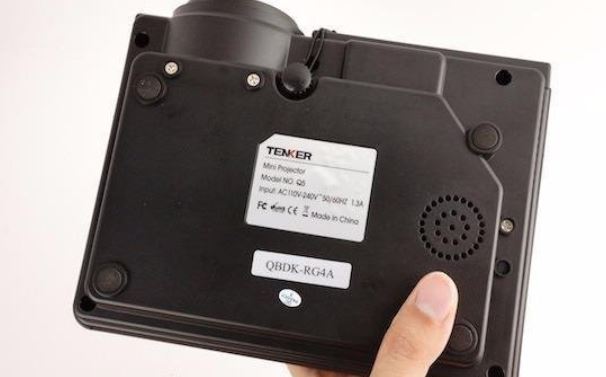 It also a color ratio of 1000:1 which refers to the ratio of light reflected from a solid white image to a solid black image. For example, with the Tenker Q5, you’ll see that the white images are 1000 times brighter than the black images. For a projector this size with such a low price, this color ratio is good; however, the spectrum in projectors for color ratio is pretty broad, and can go as high as 10,000:1. Furthermore, it does have an impressive ability to generate 16.77 million colors, so you’ll find that most of your images really pop when it comes to saturation and color intensity.

Lastly, the Tenker Q5 has an improved fan that is designed to be less noisy during use. The fan noise is low, but is still somewhat noticeable when the projector is turned on. It didn’t necessarily distract from our viewing experience, but it was definitely apparent when we listened closely. 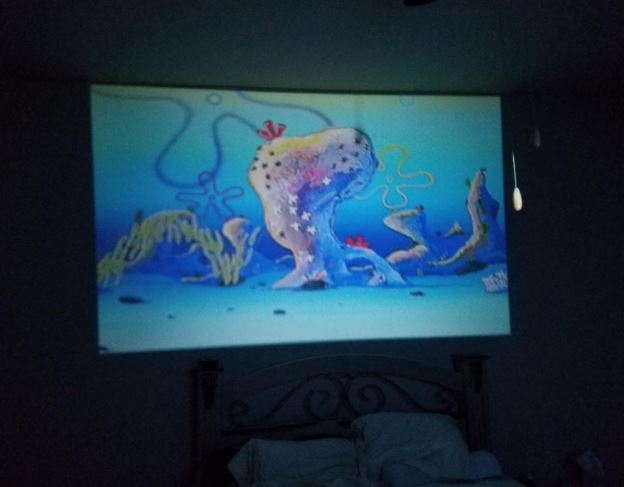 Overall, the Tenker Q5 generates a really crisp, sharp image with a very impressive color profile. However, this’ll really depend on two things: the orientation of the projector as well as the brightness of your viewing area. It has a native resolution of 800 x 400 pixels, but is capable of projecting in 1080p, 720p as well as 480p.

We’d recommend setting up the projector somewhere within the projection distance of 1.15-3 meters and, if possible, keeping the screen size to no greater than 80 inches. We found that the further away from the projection surface we brought the projector the worse it performed. In addition, the max resolution of 1920 x 1080 could only be stretched so far before we noticed flatter, softer images. You’ll also want to make it as dark as possible when using the projector, to enhance brightness as well as overall image quality. 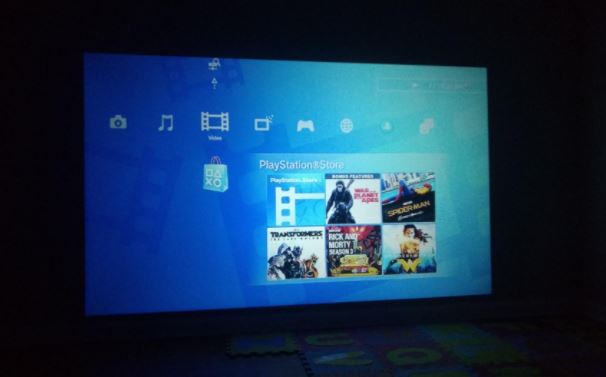 While the Tenker Q5 is a powerful, convenient projector, it does come with a few minor downsides. First and foremost, it doesn’t have a universal mount on the bottom, meaning it can’t be set up on a tripod or mount. You’ll have to set it somewhere flat and prop it up in order to find the viewing angle you’re looking for. It doesn’t make or break the projector, but does make it a little less convenient to set up.

The Q5 also doesn’t support Dolby Audio. While playing files from an AppleTV, FireStick or Blue-Ray player you’ll have to turn Dolby off to get any audio output at all. The projector only has one speaker, but it still would have been nice for it to at least play audio from Dolby media platforms, even if it wasn’t in full surround-sound.

Lastly, you won’t be able to use the Tenker Q5 wirelessly. This mainly applies to smartphones and tablets. In order to use either, you’ll have to connect them with a USB cable. It would have been really impressive for the projector to be able to connect wirelessly to smartphones or tablets right out of the box. While it didn’t totally hurt the overall quality of the projector, it would have been awesome to have this capability on board. 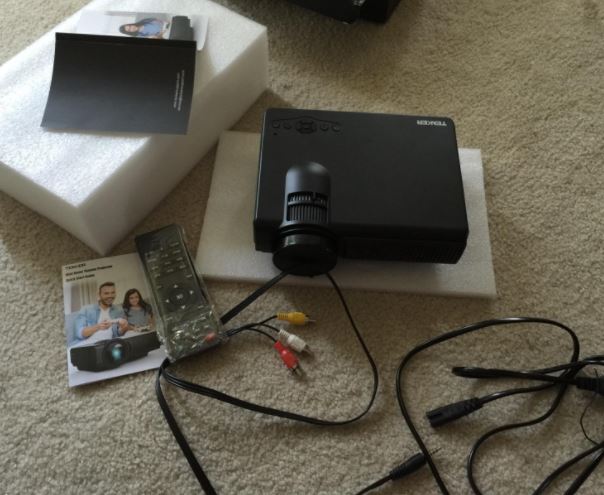 The Tenker Q5 Mini LED Projector is without question an affordable, high-quality option that can be useful in a variety of settings. Due to its wide range of compatibility features, as well as its powerful, efficient light source, we found that it could work in living rooms, backyards or just about anywhere that was dark enough to maximize image quality. It had a few downsides that mildly interfered with its overall convenience and usability, but was still a great option for those working within a budget.