Flight simulators have advanced quite a bit over the last few years. Microsoft Flight Simulator, for example, is now actually used while training pilots. It’s unlikely they could have predicted that when they were testing the first edition in the 80s!

Thanks to the increasingly powerful home computer systems, flight enthusiasts can enjoy these simulations from the comfort of their own home. However, without the right equipment the experience can be a little lacking.

There are plenty of flight sticks on the market, but how many of them are detailed enough to accurately reproduce the flight experience? Even recreational games are taking advantage of the advanced hardware gamers have access to. If you’re playing online, your controller can make or break your performance. When they’re looking for a professional grade controller, many gamers turn to Thrustmaster. While this company has many flight controls on the market, they’re also very well known for their racing wheels. Today, we’ll be taking a look at one of their most popular flight sticks, the Thrustmaster T-16000M. 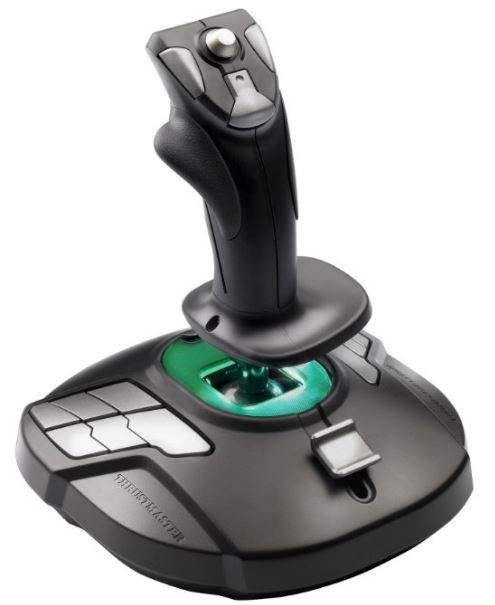 As you can tell from the photos, the T-16000M is a pretty serious looking flight stick. The name doesn’t really roll off the tongue that well, you have to wonder how they came up with it? It’s simple, actually. The T-16000M is capable of measuring sixteen-thousand different analog positions. This is an incredible level of precision. Once you realize that most flight sticks on the market are sold with 216 points of resolution, it becomes clear why Thrustmaster wanted to plaster the number on the box. 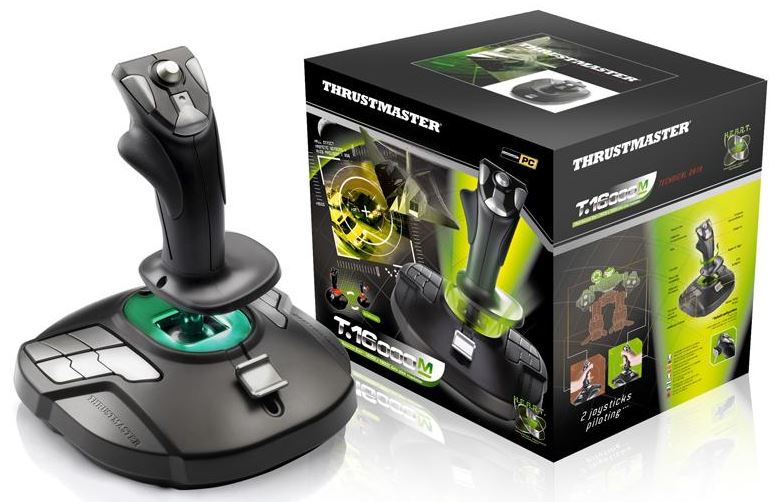 The million-dollar question, how does the Thrustmaster feel? Pretty comfortable, actually! It was a little larger than other joysticks we’ve used before. It takes a moment to get used to the feel, but once you do you’ll be impressed. You feel more like you’re guiding the joystick rather than influencing it. It’s not floppy like some of the cheap models. Slamming your plane into a nosedive isn’t just a simple flick of the wrist, it’s more of a controlled motion. You’ll take the time to guide the joystick, rather than push it around.

In a way, this makes sense. Think about what effect they’re trying to create. This little stick is supposed to feel like the primary method of control for a multi-million-dollar aircraft. Should it flop around like a ragdoll? Absolutely not! That’s really what we liked most about using the Thrustmaster T-16000M, it’s both authentic and fun. 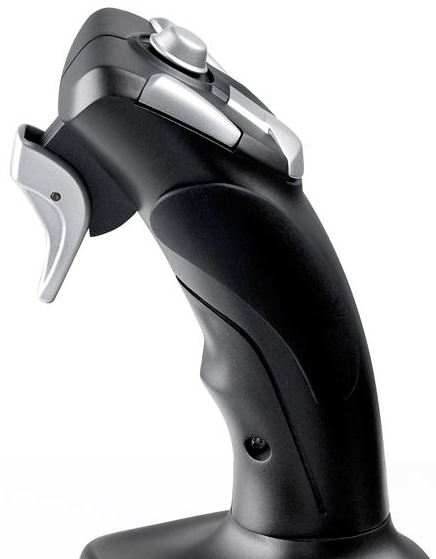 Besides the joystick itself, what additional controls does Thrustmaster give you? There are so many programmable buttons on this thing that it’s almost overwhelming. On the stick itself, you’ve got a trigger that is easily actuated by your pointer finger. By your thumb, you’ve got a little nub that’s used to control the camera. There are three more buttons located to either side and below this nub.

The yoke, surprisingly, has another little hidden axis that might surprise you. Instead of pointing it along the X-Y axis, you can also twist it to the left or to the right. The movement is ever so slight, you might at first think that it’s just poor manufacturing. But this is a second pressure-sensitive axis that is used by many games to control the rudder. 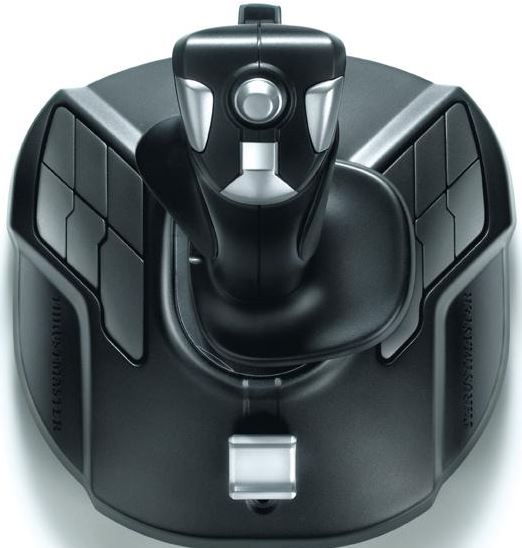 What about that giant array of buttons on the base? Those are completely customizable. Some games, such as the included Tom Clancy’s H.A.W.X, have these buttons pre-mapped to different game functions. Others allow you to set them up the way you like. Going off the default configurations, it’s recommended you use some of these buttons for features like reverse look, quick save or strafe. If you already have other flight controllers such as a throttle and pedals, you might not need all of the buttons. But having them available means that you can map out all of the essential functions if this flight stick is the only thing you buy.

If you’re left handed, please accept our apologies. Lefties seem to be constantly ignored in the controller industry. Fortunately, Thrustmaster has got your back. Although this Flight Stick is clearly designed for ergonomics for a specific hand, they included the molding you need to change to flip it. The entire process takes only a couple minutes, and all the tools you need to do so are included in the box. Just remove one screw, one clip, and reassemble with the left handed molding. Simple! 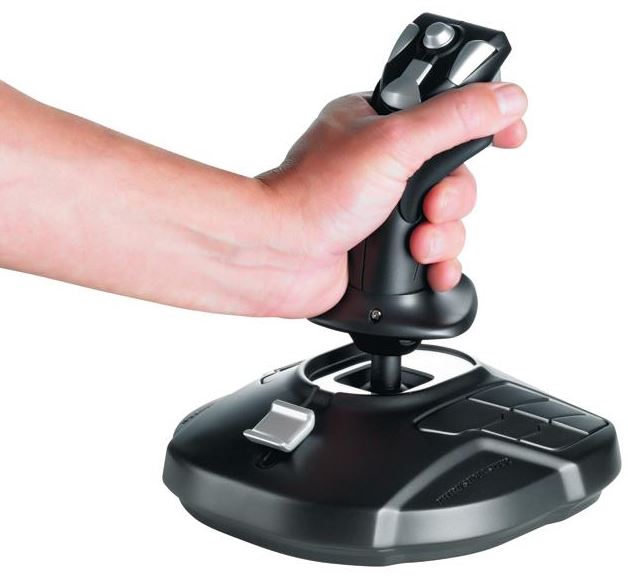 We were a bit worried when we first opened the box. After referring to the manuals, there were absolutely no installation directions included. If you’ve used a lot of custom joysticks, you know that these things can be a real pain to get working. We plugged it in and expected the worst. Surprisingly, everything started up right away! Windows detected the controller, and it was immediately available for use in our pre-installed games. The latest Microsoft Flight Simulator as well as the included game both support the controller automatically. We believe that there are many more games that do, but unfortunately we weren’t able to test this.

What about customizing it in-game? Microsoft Flight Simulator does a very good job of re-mapping the buttons depending on what type of aircraft you want to fly. For the most part, they were pretty dead on. Thrustmaster has been making Flight Sticks for quite some time, and they often stick to a similar format. This is why so many settings just work straight out of the box.

If you’re the type that likes to play around and set up your own custom controls, this is also easy to do. Thrustmaster includes a piece of software that lets you change any specific parameter you could want. 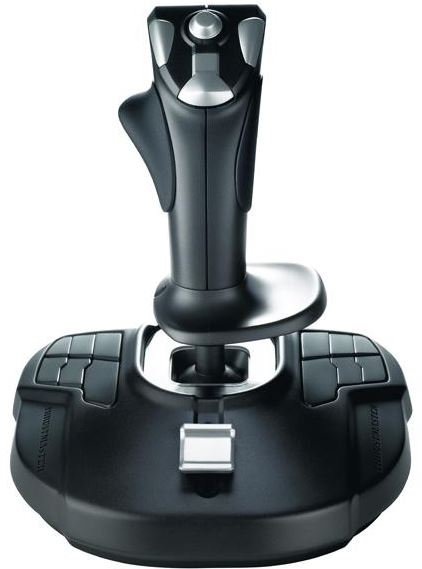 The Thrustmaster T-16000M works out of the box with the entire array of Thrustmaster flight products. They make a fantastic throttle, pedals, and if you really want to get serious and LCD heads-up display. These devices are all plug and play.

Where you might run into trouble is if you are trying to combine controllers from different manufacturers. Because the flight stick is generally the centerpiece of your entire control scheme, most games tend to assume that if you have a Thrustmaster stick you’ll want exclusively Thrustmaster control schemes on the rest of your devices. 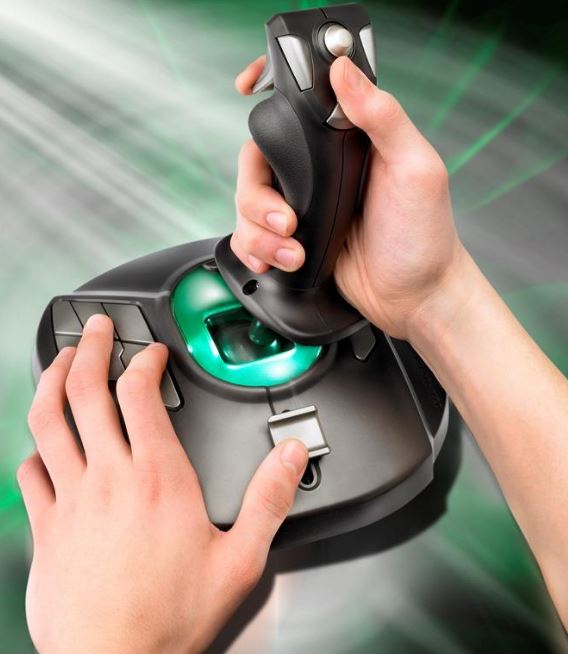 There are three ways you can fix this. First, you can create custom controls in each game. Even better, you can use Thrustmasters driver configurations software to mate your different devices into one USB root device. If you manually re-assign the configuration to match the Thrustmaster mapping, then your settings should work with most games right out of the box.

For those that want maximum control over your gaming experience, we highly recommend checking out a program called FSUIPC. This allows you to custom map any device plugged into your pc, creating advanced mappings well beyond the configuration options of any individual game.

Should You Choose the Thrustmaster T-16000M Flight Stick?

Needless to say, we were very impressed with the Thrustmaster T-16000M Flight Stick. It’s comfortable to use, and offers a pleasant, smooth control experience. It’s highly customizable, making it suitable for casual gamers who only want to buy one device, or advanced simulator enthusiasts who simply want a new addition to their existing array of hardware. The flight stick is one of the most sensitive on the market, giving you a level of accuracy that is very rarely found in other joysticks. 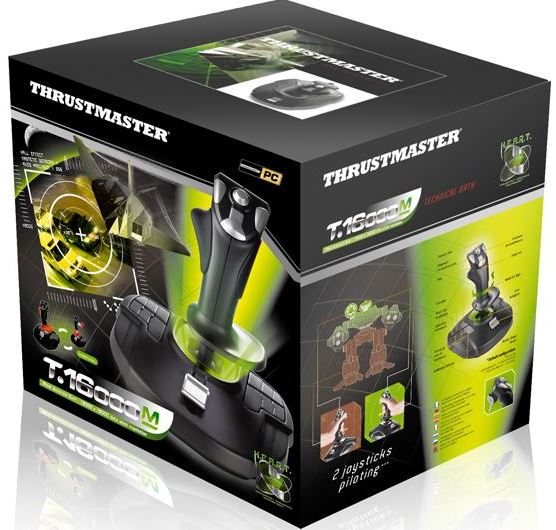 There is one downside to this accuracy. It does take a little getting used to. Are you the type of person who just wants to pick up an occasional game for an hour or two? This might not be the controller for you. You’ll spend about half an hour getting used to it. Unless you’re a skilled player, it’s a bit easier to move navigate the plane in a sloppy manner. The cheaper joysticks are a little more forgiving as they can’t pick up every little nuance of your movement.

Whether you’re a serious gamer or not, everyone can appreciate the value that Thrustmaster offers with their T-16000M flight stick. It’s really not that much more expensive than a basic model. If you’re going to be playing simulation games for anywhere over an hour a week, what do you stand to lose by starting off with a high end model? It will only cost you a couple bucks more, and save you from getting the upgrade bug once you want to improve your gaming experience.