Right, Left, Forward, Backward. Just a short time ago these were the only controls our games allowed for. Advances in flight simulators have allowed the games to accurately recreate the experience of flying a real plane. Even if you have the largest monitors, the fanciest gaming computer, and the most accurate audio system, there is still one important part of the experience missing – the controls.

Depending on what you want to fly, there is sure to be a controller that recreates the planes real controls. But the one thing that every plane has in common? A throttle. Throttle controllers are hardly a recent innovation. In fact, they’ve been on the market since the 90s. However, these throttles continue to get a little more advanced every year.

Thrustmaster is a company that’s been developing accurate gaming controllers for a long time. While they are already a household name in the racing industry, their flight simulator controllers are a bit of a new venture for them. Their TWCS throttle has just hit the market, and promises an all-inclusive gaming experience. This throttle provides the controls and tactile feedback required for a flight simulator, but also includes advanced weapon controls for gamers who want more of a fantasy experience. Let’s take a look and see if this is the throttle controller you’ve been waiting for. 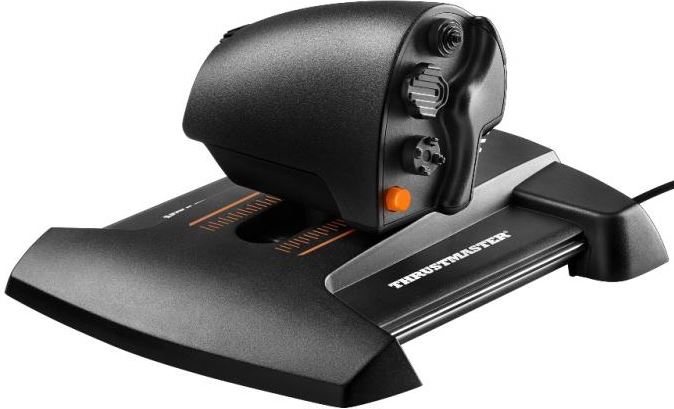 If you’ve used Thrustmaster products before, you’ll know what to expect from the build quality. The VG TWCS Throttle Controller is made from a solid piece of injection molded plastic, while all moving parts are made from metal. It’s pretty heavy, which is ideal for use on a desk. Because of the weight, you don’t have to bolt it down like you would with some of their other controllers. The moment you first put it in your hand, the controller can feel a little intimidating. There are a lot of different buttons. However, they are well laid out. While there may be a bit of a learning curve, the controller should be reasonably easy to figure out. 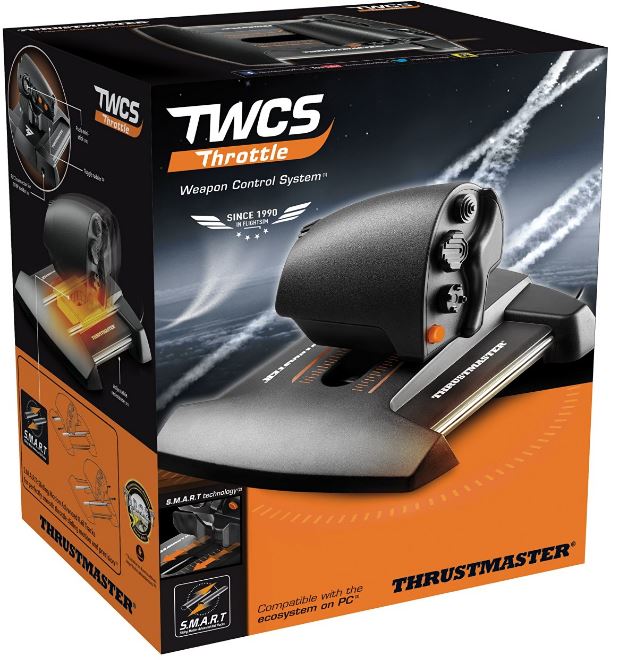 This controller has a ton of different options and buttons that can allow you to control nearly every aspect of your flight experience. The main aspect is the throttle. Push the controller forward to speed up, pull it back to slow down. On top of that, you’ve got two separate analog axis controls. By your pointer finger you have the main analog stick, and another is located on the side of the controller. 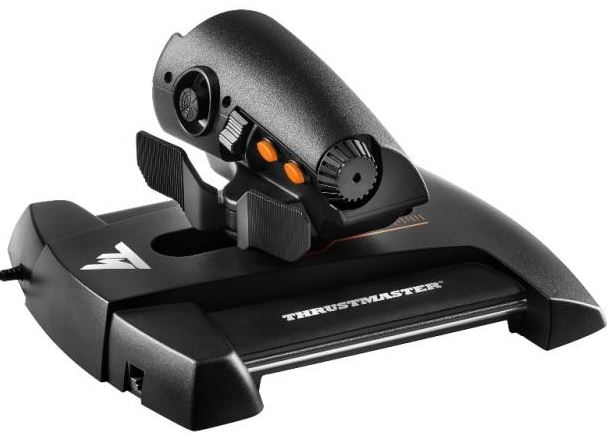 There are two main buttons on the front of the controller that make up the third axis control. This is called the toggle rudder. Holding down one of the rudders will either gradually increase or decrease the value of this third axis. You can also program this rudder to the same axis as the throttle, which will cause the throttle to move as you adjust the settings. The last axis on the controller is the rotary antenna. This is a roller located on the far side of the controller, and is primarily used for controlling weapons or zoom, depending on your game.

These controls are more than enough for entertainment based games. If you’re looking to use it for an actual flight simulator, you’ll need another peripheral to control yaw. The Thrustmaster VG TWCS Throttle Controller is designed to connect to a set of pedals which are specially designed for this purpose. Altogether, you’ve got a total resolution of 65,635 different combinations which exceed the minimum requirements for any flight simulator on the market. 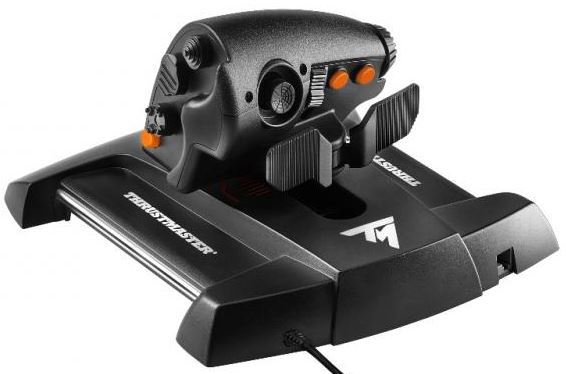 A controller this complicated might look a little frustrating to use, but the moment you put it in your hand you’ll realize how intuitively the control scheme is laid out. Each button is clearly designed to correspond to a specific finger. You won’t have to move your thumb around like you would with an Xbox or PS4 controller. You just keep your hand in the same position, actuating buttons as needed.

Thrustmaster is a pretty well-known manufacturer, and their flight controllers are used all over the world. As such, most modern flight games will be programmed to work with these controllers. The problem is that there are many great games that were released prior to this line of controllers. Should you be forced to replace your whole setup just because a couple of games don’t support it? Thrustmaster has a sneaky solution to this problem that will allow the controller to work with any game you like.

The solution is a piece of software known as the T.A.R.G.E.T programming software. This is a graphical editor that lets you modify the functionality of every single part of the Thrustmaster VG TWCS Throttle Controller. You can change sensitivity, map buttons to different purposes, and create multiple maps for different games. You can even assign multiple maps to the same game if you like.

Let’s say, for example, you’re playing a game that has a lot of combat. You can have two control schemes, one for flight and one for combat. When you want to fire your weapons, just press one of the predetermined buttons and your controller will remap for targeting mode. Once you’re done, press the button again to return to navigation mode. These controls can be set up any way you like, so the sky really is the limit.

Another handy compatibility feature is the ability to combine multiple Thrustmaster devices into one. Some flight games don’t handle multiple USB devices very well, and will only pick up one of your controllers. The T.A.R.G.E.T programming software combines all of your devices to show up as a single unit, so you can still play these games. 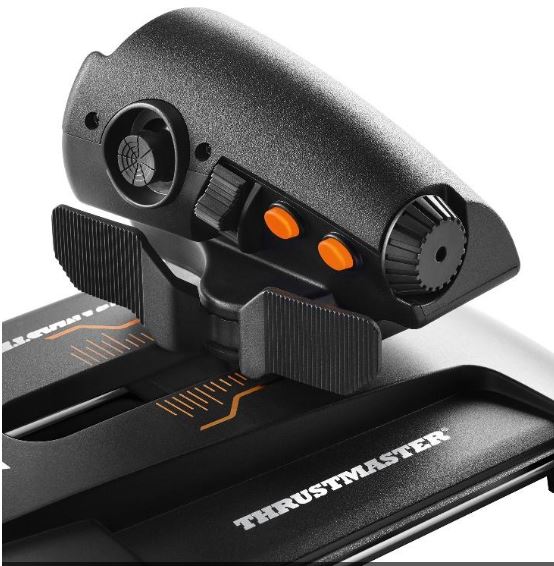 Some gamers just want one basic controller to make their gaming experience a little more realistic. But the Thrustmaster VG TWCS Throttle Controller is an advanced controller for discerning gamers who want the best of the best. It’s designed to be used in conjunction with some of their other controllers. The two must-haves are the FCS flight stick and TFRP rudder pedals. For a little extra sense of realism, you can also pick up the MFD (multi-function display) cockpit panel. Depending on what games you want to play, you can use all or only one of these controllers.

The T.A.R.G.E.T programming software really helps to bring all of these devices together, but users who just want to plug in and go can use the controllers just as easily without the software.

Because these systems are so much more advanced than most controllers, they are designed to work in harmony with each other. This means that you are not going to want to try to combine Thrustmaster controllers with ones from 3rd parties. It will work, but you’ll be missing out on some of the best features of the Thrustmaster ecosystem. 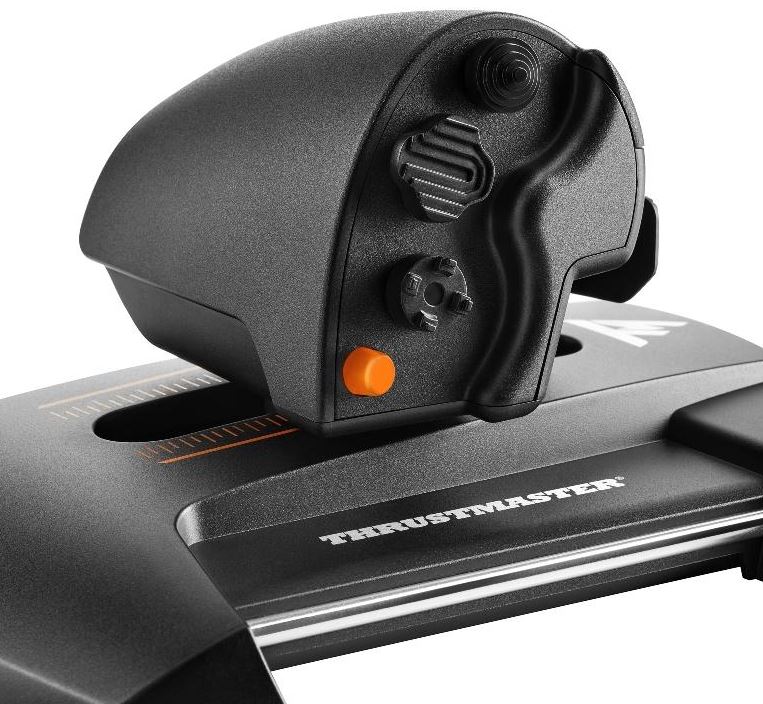 Final Thoughts – Is It Worth It?

This is one of the most universal Throttle controllers available on the market. Most throttles try to put themselves in one of two camps. You’ve got the flight simulator controllers, which are incredibly expensive and try to replicate the exact throttle used in certain planes. Then, you’ve got the controllers designed for non-simulation games. These tend to be a bit more toy-like and stack on a bunch of bells and whistles.

If you’re looking for a controller that does both of these games well, the Thrustmaster VG TWCS Throttle Controller is an excellent choice. You still get the industrial grade build quality of the flight simulator controllers, and you also get the little extras that make entertainment games a little more fun to play. Best of all, it’s priced accordingly. The throttle isn’t going to break the bank, and yet you still get a high end gaming experience. 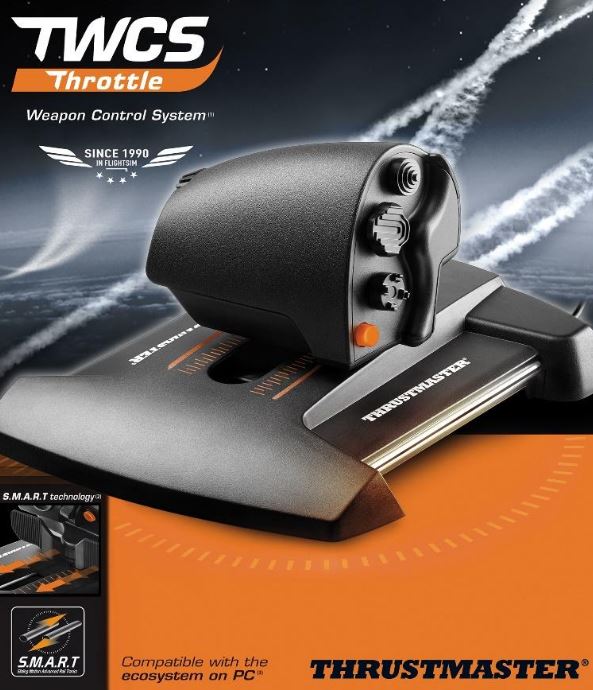 The only consideration should be towards your existing flight controllers. Have you already invested a lot of money in products made by another manufacturer? If so, double check the game you are playing. Make sure it supports multiple USB devices. If not, your throttle might not work. Plus, unless you are using the Thrustmaster controllers in unison, you can’t really take advantage of the T.A.R.G.E.T programming software.

Overall, we highly recommend this throttle to anybody who wants to take their gaming experience to the next level. Thrustmaster products might be priced inexpensively, but the level of quality and engineering you get is well beyond any comparably priced product.