Anyone who’s misplaced their wallet, phone, or even their car keys has wondered why technology hasn’t managed to solve this problem. When Tile announced their Bluetooth tracking system on Kickstarter, they quickly raised over a million dollars.

Since its release, Tile has helped thousands of people all over the world keep track of their belongings. However, there were a few disadvantages to the system. The original tile was bulky and didn’t have a particularly good range. With the Tile Slim, the company has attempted to fix, or at least address, all of the problem with their first generation product. 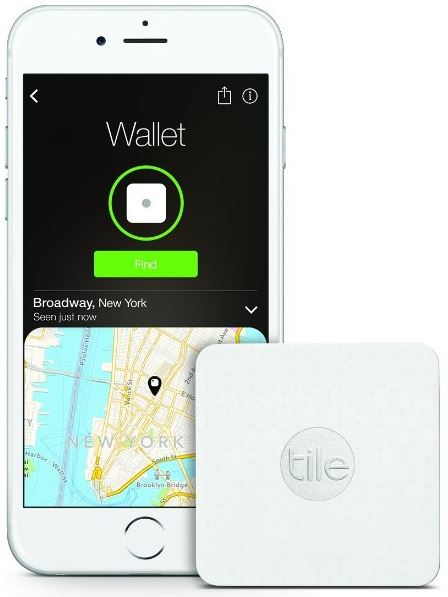 Just like the name implies, the Tile Slim is a wide, flat card-like device that’s about 2 inches by 2 inches. Thickness wise, it’s around the size of two credit cards stacked upon each other. Design wise, it’s pretty simplistic. The large white square has nothing special on it besides the logo, which actually doubles as a sneaky button.

Slipping the tile into your wallet, you’ll barely notice it’s there. In the box some adhesive is also included. This allows you to stick it to the back of your wallet, your phone, or even something like an ID badge. Each Tile device can be assigned to a different object, which you select from your phone. The way it works is quite simple. Opening up the app, you’ll see a list of all the objects that are within Bluetooth range. Objects that are in range are denoted with a green circle around them. If you aren’t able to locate any of those items, you can simply tap them and the tile will begin to emit a loud alarm. 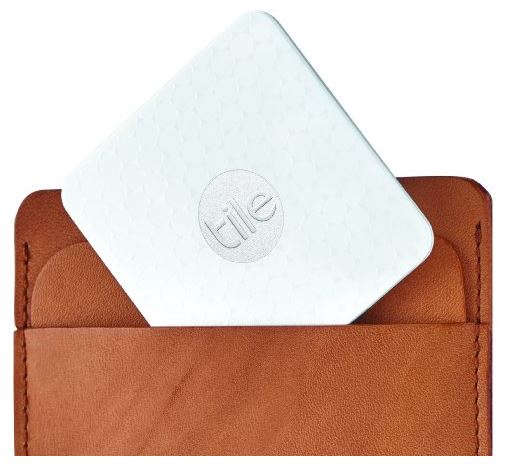 Bluetooth doesn’t have a particularly long range. What are you to do if the object you’re looking for is outside of your phones detection area? Your first option is the “last seen” feature. This will let you know the GPS location of your phone the last time one of your tiles was within reception range. You can retrace your steps to this location, and try to find the tile again. As long as it hasn’t been moved, you should then be able to start the alarm.

Unlike the original Tile, there is no handy loop that will allow you to clip it to a keyring. That’s because the tile slim isn’t a replacement to the original tile. It’s simply a tracker that will be sold side by side the old model, complimenting its usage scenarios. 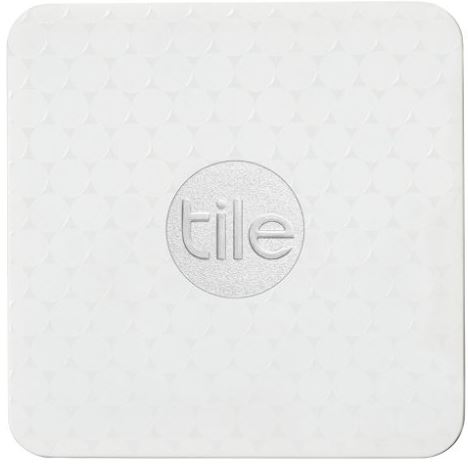 You might be wondering how you charge the Tile. There is no charging port, nor is there a replaceable battery to speak of. Remember when the iPhone 3G came out? It received immense praise because the phone was capable of lasting an entire day. Well The tile certainly has a leg up on Apple, as their tile tracker lasts for an entire year. Unfortunately, once this year is up the only solution is to replace the tracker. Tile does have a trade-in program where you can send in your dead tile and get a 30% discount on a replacement.

It’s worth noting that the battery won’t just last for a year, but it’s guaranteed to last for a year. If your battery dies before this, you’ll get a new one free of charge. This means that, potentially, the tracker could last significantly longer. Unfortunately, we won’t know for sure until this tracker has been out for a while.

How do you know when the battery is on its last legs? Your phone will notify you about a month before the tile dies.

Out of Range Tracking

Clearly, the tile works great if you simply misplace something. However, what if your item gets stolen? Or what if you drop it in a public place? Unless you’re re-tracking your steps, it could be hard to locate lost items. That’s why the Tile Slim launches with a crowd-sourced tracking app. If you lose an item and it’s out of range, you can crowd-source its location.

The way it works is simple. Each tile has its own ID. There are literally millions of possible Tile ID’s, so it’s very unlikely that two trackers will have the same one. When you’re using the Tile app, you’re not just looking for your own trackers. You’re actually hunting for every tracker out in the world. If one of the trackers that’s nearby has been marked as “missing” by another Tile user, your phone will transmit the location back to them. This is all completely anonymous, but allows you to tap into the entire network of Tile users.

There have been 6 million tiles sold in over 200 countries, so your chances of recovering a lost item are in fact quite high. 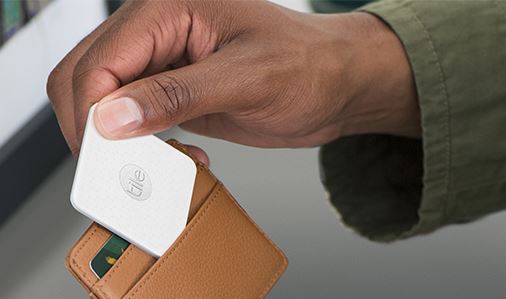 The alarm on the tile is loud. The tile can reach a sound level of up to 90 decibels at most frequencies. For reference, the sound level of an ambulance siren is 100 decibels. Because the tiles range extends about 100 meters, you’re guaranteed to be able to hear it within that range.

Still can’t hear your tile? If you’ve somehow managed to bury it in wet concrete or seal it in a safe (we really can’t think of any other way that it would be inaudible) you can tap the green circle on your phone to turn it into a proximity sensor. This works a bit long a game of hot and cold, as you roam around trying to get closer to your Tile.

Another handy audio feature of the Tile Slim is that they added a number of different rings you can choose from. The new sounds are a little reminiscent of the classic Nokia ringtones. With choices from Bionic Birdie to The Classic Call to Pep in Your Step and finally Blues for Slim, you can set a tone that will help you differentiate between two tile devices. 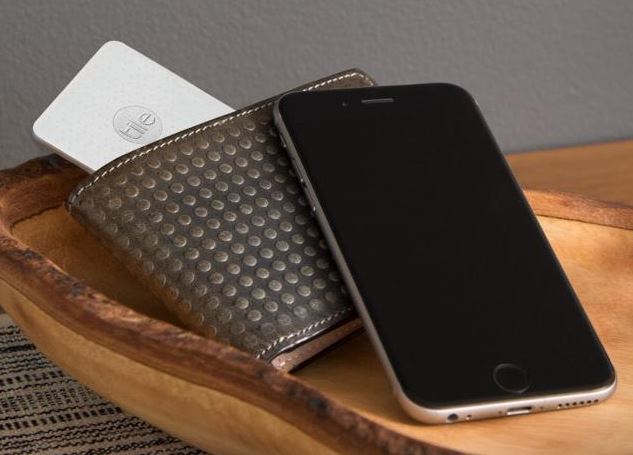 So, you can use your phone to locate any of your tiles, but what if you lose your phone? The Tile Slim actually works in reverse. Remember how the logo was actually a sneaky button? If you just press the button on any of your slim tiles, your phone will instead start beeping to help you locate it.

What if you didn’t have to buy a Tile Slim at all? The company has announced that the trackers will soon be integrated into many other new devices. Currently the Tile Slim location tracking technology is included in the EcoReco, an electric scooter, as well as a number of portable batteries and smartphone accessories. We want to blanket the world in smart location,” says Mike Farley, Tile’s CEO and co-founder. “Everything that moves should have smart location built into it”. 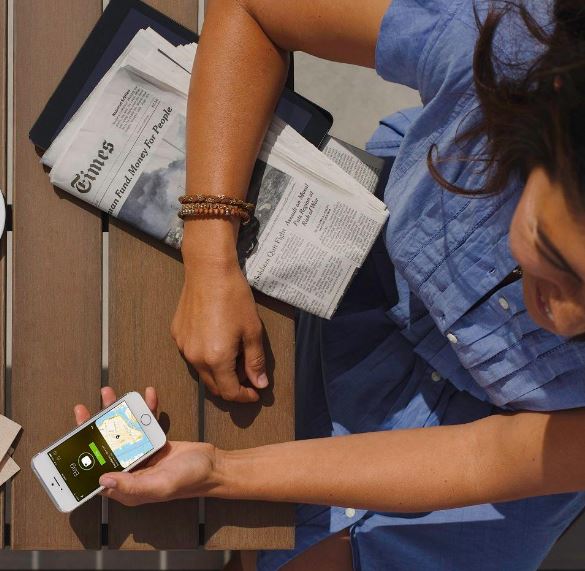 If you want to use the Tile, you’re going to have some kind of mobile device. The Tile will work with Android (Ice Cream Sandwich or above) as well as IOS devices (2011 or newer.)

There are a few tradeoffs. The tile requires Bluetooth and location services to both be on. If either are off, your Tile is completely nonfunctional. Plus, the app wants to run in the background all the time to hunt for other people’s missing Tiles. This means that the app can be quite a resource drain on your phone. It’s likely that a lot of savvy users will be turning the app off unless they are hunting for a tile of their own, potentially reducing the effectiveness of the crowd sourcing feature.

So, Should I Buy the Tile Slim?

The tile is one of those “Why didn’t I think of that?!” products. It’s so simple in concept, and has been executed flawlessly. Tile Slim is pretty affordable, and in our tests works very well.

However, there are a couple downsides. If you’re the type of person who wants to add a Tile to your keys, your laptop, your wallet, and any other important item that you want to track, you’re going to have to spend a little money. Because the tile is disposable, this is going to be a recurring expense.

Our recommendation is to pick up one or two Tiles and use them to track your essentials. For things that you might accidentally leave somewhere, the Tile works perfectly. For securing items against theft, the software hasn’t quite been adopted to reach that point. However, the original Tile sold millions of units. If the Tile Slim has the same adoption rate, then the crowd sourcing feature could be handy within a month of launch.

Review of the Marantz Professional AVS, Self Contained …
October 17, 2018