The Internet used to be easy. If you’re only watching low-resolution videos and checking your email, then you don’t need that much bandwidth from your Wi-Fi connection. But these days, we have much greater expectations. We expect our connections to be able to stream Netflix in one part of our home while downloading a game in another. And even though the data burden is getting bigger, we expect those connections to stay stable

Which is why mesh networks are the latest big trend in Wi-Fi. People don’t want to have to sit six feet from their router to get a steady connection to their network. They don’t want to hit waves of buffering on their video every six seconds. Even casual Internet users have come to understand the difference between being connected to the Internet, and having that connection be worthwhile.

The TP-Link Deco M9 Plus is one of a hundred different mesh routers on the market, but the M9 Plus is amongst a select few that are actually worth using. Within its bright frame, the M9 offers a AC2200 tri-band Wi-Fi connection. That makes it ideal for streaming 4K video content and other bandwidth intensive tasks.

And the M9 Plus has a handful of convenience features that you can feel in day to day use. For example, it will automatically identify the best connection and path for every device, providing uninterrupted Wi-Fi as you move from one space to another. And it offers far greater backhaul than similar mesh routers, which is useful for networks that have more than a dozen devices connected.

Physically speaking, the Deco M9 Plus looks like an un assuming white disc, which might rest unseen on a coffee table. To identify the M9 Plus as an electronic device of some sort, the only clue you have is the one LED on its topside. Hidden away on the backside, you’ll find a pair of Gigabit ports, far from sight. Having to only manage the two Gigabit ports makes physically setting up the Deco M9 Plus quite easy.

The disc is built with a 6” diameter, standing about 3.5” tall. And the white is a particularly bright pearl white, which roughly resembles the high-end Apple aesthetic. As far as the internal guts of the router goes, the Deco M9 Plus keeps to the highest standards at every turn. Within the M9 you’ll find a quad-core CPU paired with 4GB of flash memory. And it uses three Wi-Fi bands dedicated to backhaul, offering support for more than 100 separate devices to connect to the network. 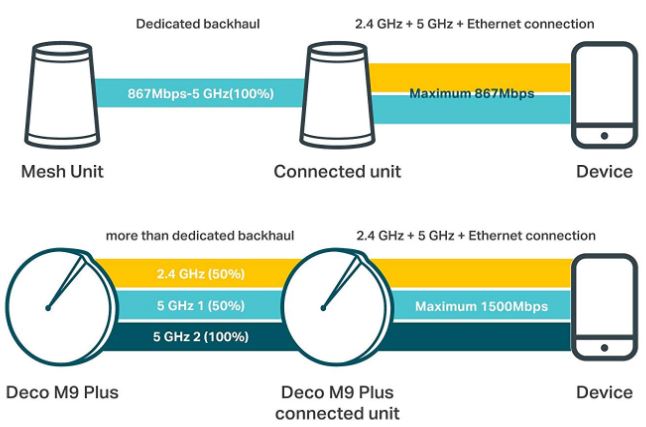 Of course, plugging in your Ethernet cable is just the beginning. The software side of your network setup is taken care of through the included free app. Luckily, using the Deco M9 Plus app is about as easy as plugging in the Ethernet cable. And you might end up spending more time than you think browsing through the app because it can serve as sort of a central nervous system for your network. For instance, you can use it to limit or monitor Internet usage on your network.

One problem with extending your network to a mesh is that things can get complicated quick. You don’t want to end up in a situation where you’re having to log-in to two separate networks, or micromanage two separate passwords. And you certainly don’t want to deal with reconnection issues anytime you walk across some invisible line in your connectivity.

But it doesn’t have to be complicated. The Deco M9 Plus is built such that the network requires just one name and password. You don’t have to deal with added issues when you move from one side of your home to the other. And that’s the kind of ease of use the TP-Link Deco M9 Plus tries to offer at every point, which is why it’s so clearly oriented towards people who aren’t experts are setting up a network. 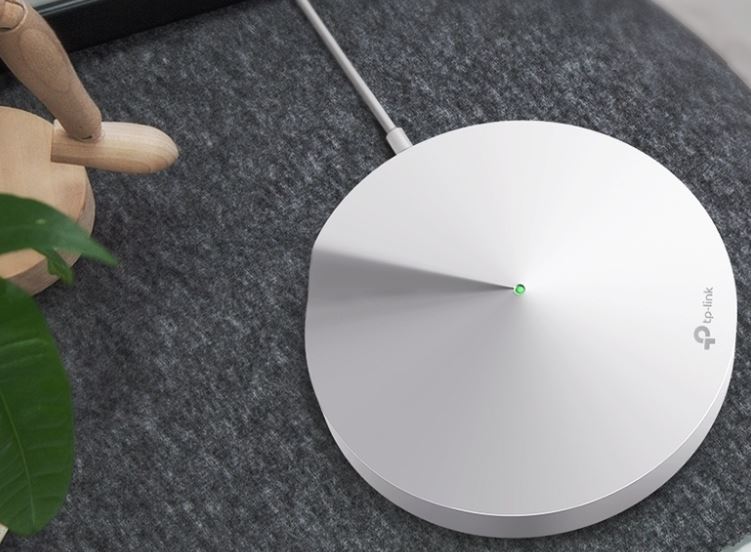 More Ease of Use

The M9 uses self-healing network technology. That fancy name basically means if your connection gets disrupted by something that happens in your environment, then the network will be rebuilt. You don’t need to start resetting the router or changing the options every time someone turns on a microwave, or every time your neighbors come home and start crowding the 2.4Ghz band.

And then there’s more. The Deco M9 Plus is also a ZigBee smart hub, which allows you to control smart devices through the M9. It’s compatible with most ZigBee devices, including thermostats, lights, and so forth. If you’re not familiar with the technology, it’s similar to how many products are now specifically built to work with Amazon’s or Google’s voice assistant machines. Some people are now building “Google homes” or “Amazon homes” around just one of these technologies.

By contrast, ZigBee is a standard that’s not strictly controlled by one brand. That allows for a wider range of developers to create ZigBee products, including big brands like Samsung. Whether or not you’re currently using a ZigBee device, it’s nice that the Deco M9 Plus is forward-thinking enough to include that kind of support. 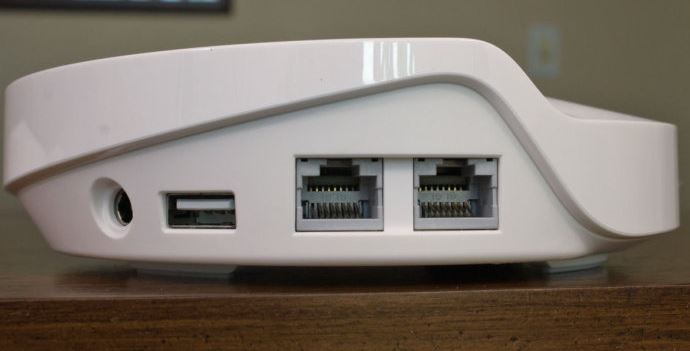 Although few people seem aware of it, another thing a router is responsible for is helping administrate network security. And the TP-Link Deco M9 Plus offers top notch security, having dictated those tasks to the HomeCare software suite. It provides protection for malware, antivirus, and a wide safeguard for all devices on the network. Even devices that don’t have their own layer of protection, like a DLSR smart camera, can get protection through the M9.

Moreover, these protective systems are kept updated through Trend Micro updates. So as new threats emerge, you’re protected without having to even think about it. That’s important because network threats and exploits are discovered all the time, and once it’s common knowledge they exist, they those weaknesses only become more dangerous.

You need protection hours after the fix is available, not weeks, and certainly not whenever you remember to get around to doing it yourself. And the M9 extends this kind of protection beyond individual computers. Simply being able to block malicious sites can protect everyone on the network.

On the technical side of things, the TP-Link Deco M9 Plus uses 802.11 AC wireless connectivity. That’s the latest and greatest Wi-Fi format, with bandwidth capabilities that put many wired connections to shame. Whether you’re currently using a massive Gigabit Internet connection or not, having 802.11 AC prepares you for speeds to come.

Over individual bands, wireless speeds reach 400Mbps on the 2.4GHz band, and 867Mbps for the 5GHz band. All in all, there are six Wi-Fi antennas, one Bluetooth antenna, and one ZigBee antenna within each Deco M9 Plus. Those antennas help provide high performance connectivity over roughly 4,500 square feet. At least, that’s what you get when you’re able to position two separate units in the Deco M9 Plus 2-pack. The M9 is also available in a 1-pack, which has all the same essential features, but supports about half as much square footage.

Like many mesh routers have started to do, the TP-Link Deco M9 Plus has uses dedicated 5Ghz backhaul for your network traffic. But unlike many mesh routers, additional backhaul throughput can be issued to unused Wi-Fi bands, depending on network demand. So as the backhaul needs of your network get bigger, the M9 adapts to ensure the performance of the network doesn’t start dropping into oblivion.

The Deco M9 Plus control app has wide support for both iOS and Android. It’s also compatible with Alexa and IFTTT. Along with ZigBee support, the M9 is truly a triple threat. Whether you’re looking to do something a little applied, like setting up a public network for a small library, or you’re just looking some convenience at home, the M9 Plus has plenty to offer.

One of the best features of the Deco M9 Plus is almost too obvious to say. But there’s a big difference between spending $200 on a 4,500 square foot mesh router, and spending $200 on a pair of routers which can achieve 4,500 square feet. In the case of the single router, your connection is anchored around one physical point, the router. When you’re using two separate units, in placing the second unit, you have the ability to more carefully draw the lines of your network connectivity.

Of course, this also means you’ve got another electronic box sitting around, and for some people that’s going to be a drawback. But if the network you want to create doesn’t fit neatly within a circle around your router, having two separate units offers some advantages that can easily go overlooked. 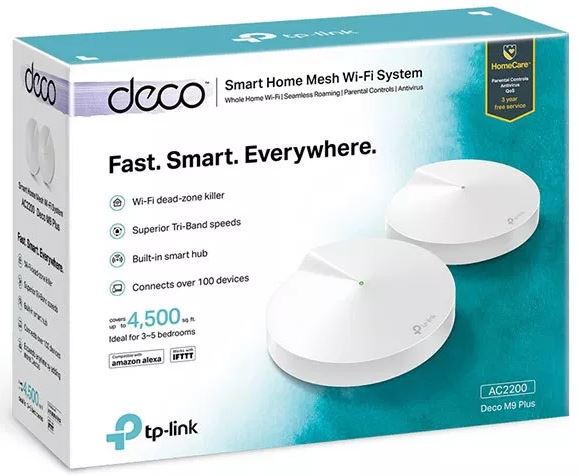 Who Should Choose the TP-Link Deco M9 Plus?

The TP-Link Deco M9 Plus certainly has style on its side. It looks nothing like most mesh routers, or indeed, like a router at all. If you like to keep a minimalistic aesthetic around the home, and you don’t want one more electronic box crowding up your room, you might be impressed with how well the M9 Plus can blend in. If you’re not, it’s still small enough to hide-away.

When you look at the performance of the hardware within the M9 Plus, it’s easy to be impressed. Ordinarily, one of the simplest ways to access your network settings involves typing in the IP address to your router directly into a browser. And within an intentionally intimidating-looking window, you then make adjustments to your network. The Deco M9 Plus makes it easier, simpler, and less intimidating to manage your network.

I’s got wide support for voice assistance, impressive architecture for network backhaul, and a price that’s easy to swallow. People with countless devices connected to their network will find the M9 Plus a welcome savior for their bandwidth speeds. And anyone who does tons of downloading or streaming content will find just as much available to them. The M9 Plus is a good choice for virtually anyone, but is a particularly good choice for PC novices who want more control over their network.