Headphones aren’t the same. Sports headphones are made specifically for people who are jogging along noisy streets, or getting drenched in sweat at the gym. Studio headphones prioritize sound quality by sacrificing noise isolation. And then there are gaming headphones, noise cancelling headphones, and quite a few others.

But who wants to own a dozen pairs of different headphones? If you expect reasonably high quality from your audio equipment, and multiply that cost over three or six pairs, your budget will explode. That’s why if you’re splitting your listening between multiple places, but want to keep using the same pair of headphones, then you want those headphones to be generalists rather than specialists.

The X5 most essential thing to understand about the X5 is the depth of their ubiquitous design. They’re intended to be equally well suited for travel, work, or taking to the gym. The general idea behind the Treblab X5 design is to maximize user friendliness, while maintaining sound quality in a variety of different environments. Of course, the Treblab X5 aren’t going to perform as well as headphones that specialize in some particular way. But frankly that’s not the point of these. 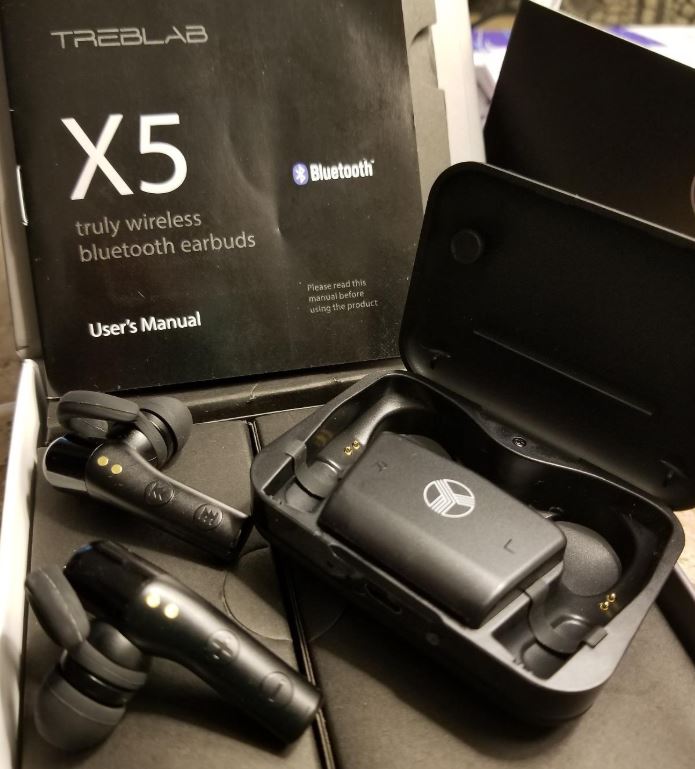 The X5 are built to fit snugly within the ear, resting on the ear bowl. It’s that design which makes them adaptable for running, commuting, or taking to work. But any Bluetooth headphones that really want to be useful in those types of situations need to be a tad more rugged than their indoor-only counterparts.

Which is why the X5 are water resistant, helping protect them from sweat and rain. The IPX4 rating is one of the lower water resistant ratings. It basically indicates the X5 are protected against a light spray. In practical terms, they’re might survive being dropped in a puddle, but they’re not going to be able to handle an afternoon in the pool.

Aesthetically speaking, the X5 look fairly distinct for Bluetooth headphones. They’re worn such that it looks like a short antenna is resting on the ear. Each ear-piece weighs only a few ounces, allowing them to sit unnoticed yet secure within the ear. But whether or not the fit is comfortable or secure may depend on you switching between some of the included ear attachments, we’ll get to those in a moment. 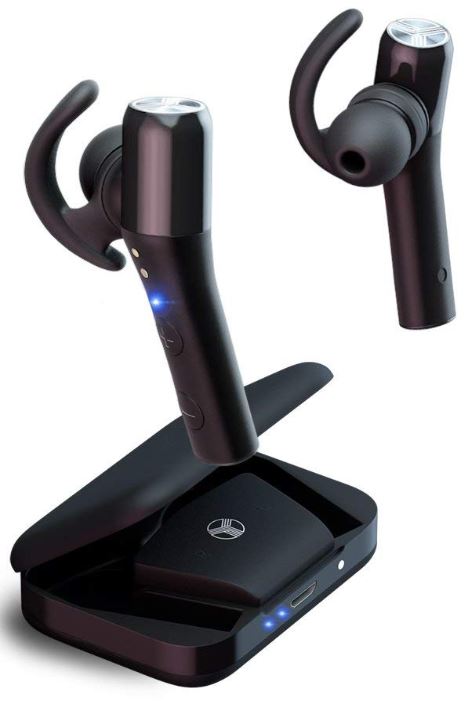 The Treblab X5 support up to 20 hours of battery life, with a caveat. The small earbuds actually only have six hours of power in them. You draw the 14-hour difference from the charging case. Between listening sessions, you can stow the X5 in their chargeable case, helping you keep things perpetually charged.

Of course, all these battery estimates need to be contextualized. There are half a dozen different factors that affect how long your battery will last, not the least of which is your level of volume. In what might be called real world conditions, the Treblab X5 provides closer to 5-hours of battery life. And when you’re burning through battery at a greater pace, for whatever reason, you can expect the estimate on the charging case to be affected as well.

In other words, some people will find the estimated 20-hour battery life looks more like 16 hours. But those estimates are still more than adequate for every kind of listening that the Treblab X5 is built to take on. Five hours is about all you would ever need from a single charge.

Once you’ve finished the battery, you’re looking at a complete charge time of about two hours. For a quick top-off of the battery, you’re usually done in closer to 45 minutes. OF course, this all depends on the particular USB slot you use to charge with. But in either case, this charging case allows you to keep your music going for longer than essentially any other Bluetooth headphones within this price range. 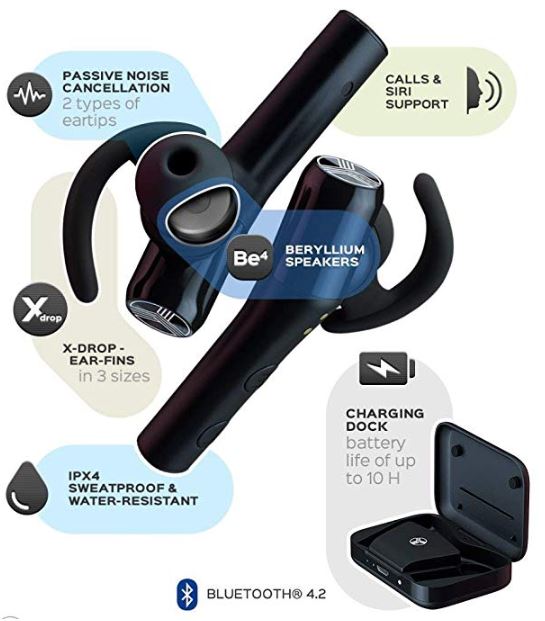 As far as high-end features go, you won’t find much on the X5. It does have native compatibility with Siri, as well as a handful of other voice assistants through Android, iOS and Windows. Of course, support for these assistants is part of the reason why you don’t need many high-end features for the X5 to feel as high end as it does. For managing your calls and wirelessly interacting with the world, support for basic voice assistants can turn Bluetooth headphones into much more.

The Treblab X5’s built in microphone is good for basic calling, but it’s not going to offer business quality call clarity. If you wanted an exceptionally clear microphone, that would require some specialist headphones built with multiple microphones.

Here’s a feature that can be difficult to explain. The Treblab X5 use what’s called cVc 6.0 noise cancellation. It isn’t what it sounds like. You see, cVc noise cancellation is a type of algorithm. It helps provide changes to your sound through things like automatic gain controls, adaptive equalizers, power saving techniques, and stream mixing. 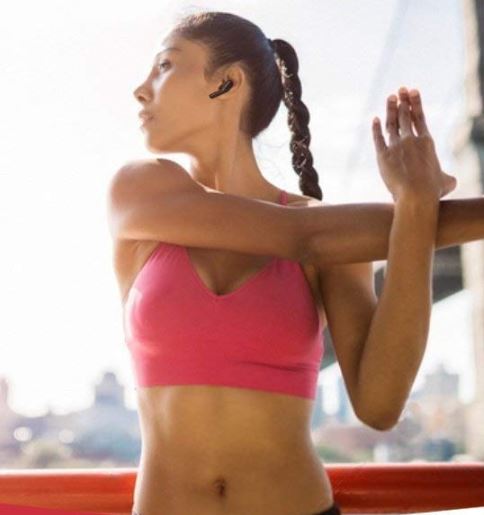 But those cVc 6.0 features do add up to some fairly impressive wireless sound. The Treblab X5 use Beryllium drivers, which are aimed at providing responsive sound that’s balanced for a variety of different types of listening. The result is the X5 are great for listening to music, watching movies, and for playing anything with vocal tones. From podcasts to audiobooks, the Treblab X5 won’t disappoint.

But one area where sound quality can get hairy is in loud spaces. The X5 doesn’t have any native noise cancelling in its design. The ear tips of the X5 don’t actually enter the ear canal to make a physical barrier between you and external sound. In other words, the X5 block about as much sound as a cotton swab. If you’re listening in a louder place, you’re going to have to turn-up your music. And that’s essentially the only place where the Treblab X5 suffers in sound quality. 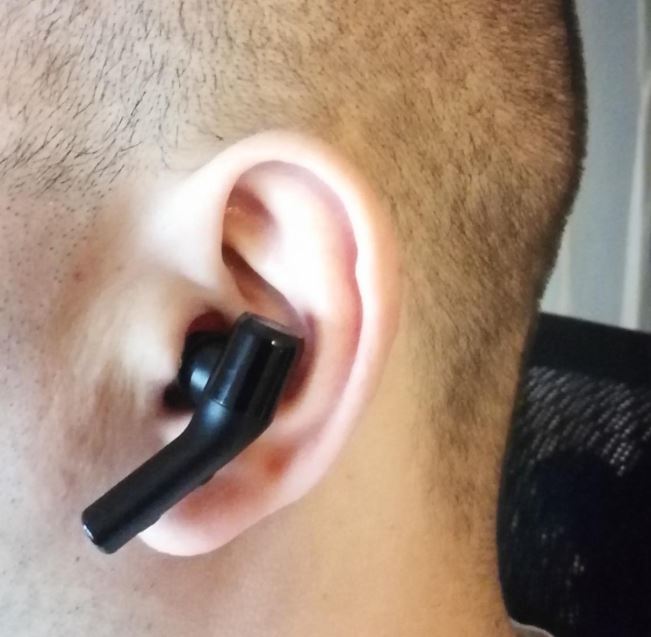 Wireless equipment that uses batteries can be tough to keep tabs on, especially if the gear is small. After all, how are they going to stick an OLED display on a headphone that’s barely big enough to fit in your ear? But that doesn’t mean you’re left in the dark. The Treblab X5 provides in-ear prompts give you information about power levels, incoming calls, and so forth. But really, most of the ease of use of the X5 is wrapped up within the charging case.

Between listening, you just throw them in the charging case, and they’re back to full power by the time you want to listen again. Even though the 6-hour battery isn’t especially formidable on its own, backed with the charging case, it’s rather impressive how long the X5 can last. 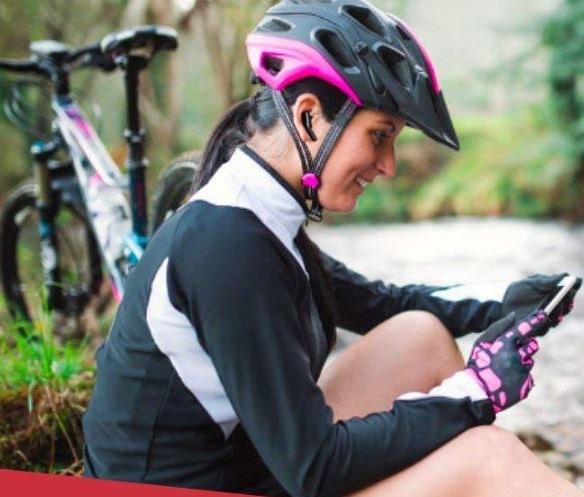 Connectivity is made over Bluetooth 4.2 for wireless HD audio that preserves sound quality over distances. Compared to Bluetooth 4.0, the 4.2 version is essentially better in every way. It has wider gateway support for the Internet, it’s more power efficient, it’s faster and has more capacity for data transmission. In short, it’s all around improved.

Unfortunately, those improvements aren’t deeply felt in the modest 38-foot connection range of the X5. But to the credit of the X5, that 38-foot range is well above average, and far more than most people will ever need. More important than their range is the underlying signal strength behind that 38-foot connection. With the support of Bluetooth 4.2, the X5 has no problem streaming high resolution audio.

And although Treblab hasn’t made much mention of this feature, the X5 Advanced Bluetooth Headphones actually do support multi-device connection. You can have your smartphone and home theater simultaneously synced without an issue.

The X5 don’t actually enter the ear canal. That’s a large part of what allows you to wear them comfortably for several hours at a time. But this design doesn’t provide any significant measure of noise isolation. If your music is loud, the people around you will hear it. And if the people around you are loud, you’ll hear them. For people who need to remain alert while listening to their music, that should be no problem. In fact, it’s preferable.

The X5 includes three sizes of silicone ear tips, expandable foam ear tips, and ear fins. It also includes a short USB charging cable, and the portable handy charging box. You can store all of the extra stuff within the box, including the charging cable, which makes it easy to keep everything together. Treblab also includes a one-year warranty for the X5. And while it’s not likely you’ll need it, Treblab has 7-day weekly customer service should you encounter a problem. 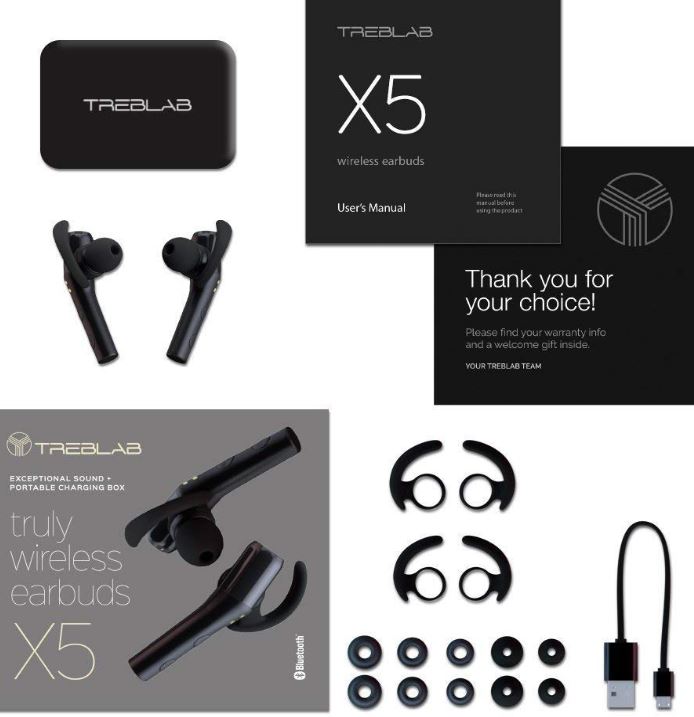 Who Should Choose the Treblab X5?

Sometimes it makes sense to have multiple pairs of headphones, each for a different activity. Not every pair of headphones are built to do the same things. But the Treblab X5 was built with a universal design, intent on making them a jack of all trades.

For watching movies, listening to your favorite music, relaxing to an audio book, or catching up on the news, the X5 performs well on every front. But a jack of all trades is a master of none. For example, the Treblab X5 won’t provide the same protection from noise as headphones which are specialize for that task. And you’re not going to get business-quality calls from headphones that haven’t specialized in microphone clarity.

But if you’re looking for one pair of headphones that will do everything for you, the X5 is a great choice. They offer steady performance for everything they try to do. They’re as lightweight and portable as any pair of outdoor sports headphones, and their charging case gives them the battery life of headphones built for the home theaters. Just about anyone who’s looking for a solid pair of midrange Bluetooth headphones should give the Treblab X5 close consideration.