Robots are taking over the world. Not in a terminator kind of way but in a convenience way. Robotics have been automating industries such as fast food, manufacturing, and even elderly care. Now along with that other house robot the Roomba, they are invading the home to look after our pets while we’re out.

For pet lovers out there, it is a common concern that your pet is sitting at home in a depressed lonely stupor rotting away from sadness and inaction. At least that’s been my experience… Whether you feel this way or not however is beside the point because just as idleness is unhealthy in humans it is also unhealthy in animals. The VARRAM Pet Fitness Robot was designed to be a companion that keeps our pets active while we are away.

The VARREM Pet Fitness Robot is designed to look like a cute pet toy. Even it’s programmed mannerisms of shaking and speeding up make it feel playful. For those of us with larger pets that might actually be able to cause some damage, all fitness robots are now shipped with a case that protects it from the jaws of life. Plus for the cat lovers out there it has a kit with a cat tail attachment to get your cat in a playful mood. 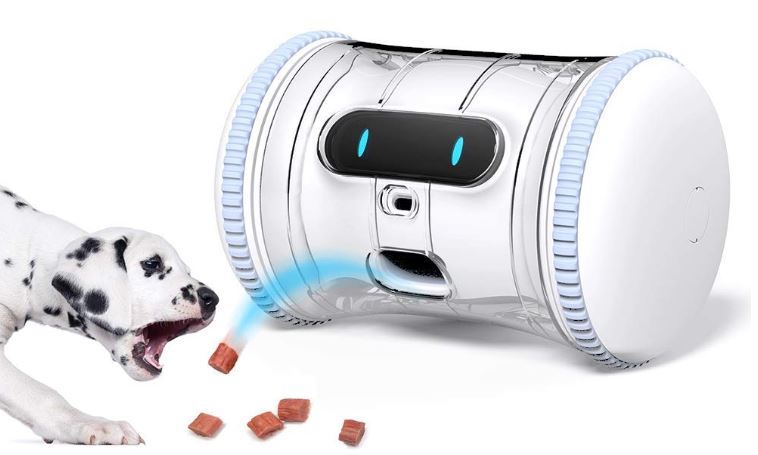 This robot was clearly designed to attract attention from our pets, however it is by no means an ordinary pet toy. With the app you are able to monitor your pet’s activity remotely. You can even customize the routes the robot takes your pet on or the times you want the robot to engage them.

On top of physically engaging your pet, it can also distribute treats in order to keep their attention and reward them for play. If your dog gets Pavlov’d into playing with the robot it increases the engagement time and thus maximizes its value. So adding some treat dispensing classical conditioning into the toy is a nice touch. 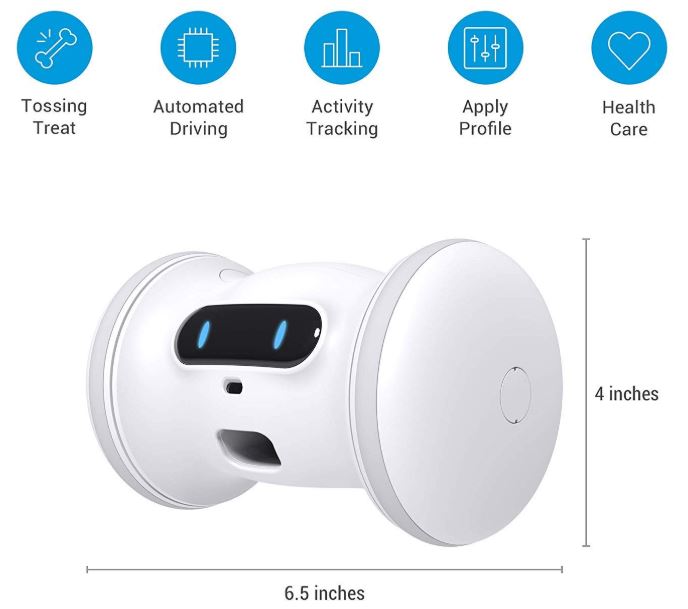 There is ample research that has demonstrated that animals suffer separation anxiety when they are left alone throughout the day. Some animals even destroy things while you are gone as a way of dealing with that anxiety. If you have ever had your cat or dog follow you to the door or get incredibly excited when you returned those are signs that your pet is suffering from separation anxiety while you are gone.

One recommendation on helping animals deal with separation anxiety is to have ‘busy toys’ for a distraction. If your pet is engaged with, or paying attention to something else while you are out it has less time to stress about being alone. Oddly enough even companion pets often don’t help because they end up just stressing together over your absence and can even double the damage to property if they feed on each other’s anxiety. 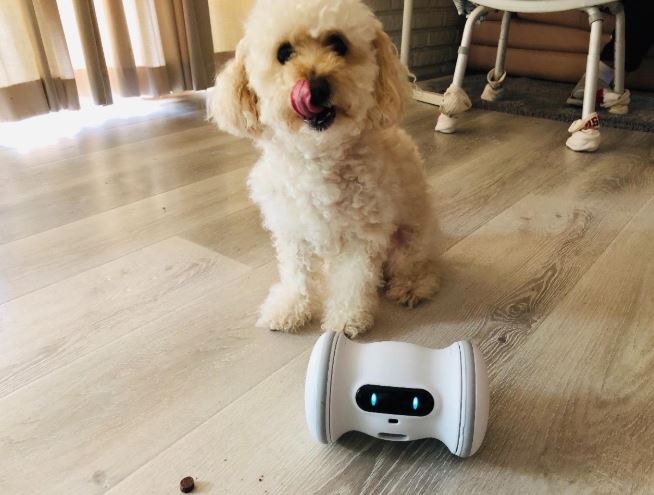 Aside from just needing a distraction, pets need to be physically active in order to minimize the negative effects of separation anxiety. The more active the pet, the less stressed it will be when you are gone. So keeping your pet physically and mentally engaged is the solution but you can only do that yourself during the hours you are home. That is where the idea for a robot fitness pet comes from.

The VARRAM pet fitness robot has some pretty neat hardware. The robot is utilizing ToF sensors as well as gyro sensors that use infrared lasers to measure distances in order to track and map the environment. The ToF sensors (Time of Flight) measure the duration that it takes something to travel some distance. That information is then used to judge the distance between the sensor and the object or objects that it is measuring. It then creates images with the measurement data by generating individually measured points. These sensors are often used in vehicles for autonomous driving or topographic mapping, so seeing them inside a fitness robot for your pet is pretty cool. 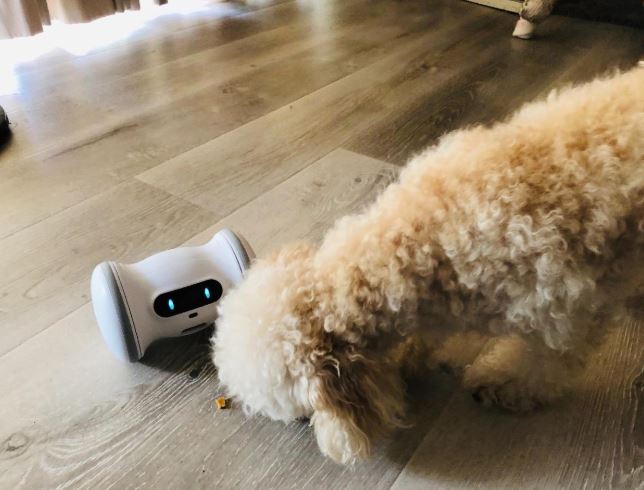 The gyro sensors are in most of our smart phones that we carry around as well. They are known as angular rate sensors or angular velocity sensors. In our phones they enable those cool VR features or just the ability to play games that require you to move your screen around in order to engage something in the game. In the VARRAM pet fitness robot however it is used to make judgment about the robots physical state. If it falls down the stairs and lands on its side somehow, it will be able to attempt to readjust itself using the data from the gyro sensors.

The robot has an IPX4 water resistance rating which makes it splash proof from any direction. This is particularly important because those of us with more mischievous pets know our pet might try to urinate on the robot. You will still have to clean it up but its nice to know the robot wont die such a horrifying death. With an IPX4 rating you should not be shooting any high powered water jets or submerging the robot under water. 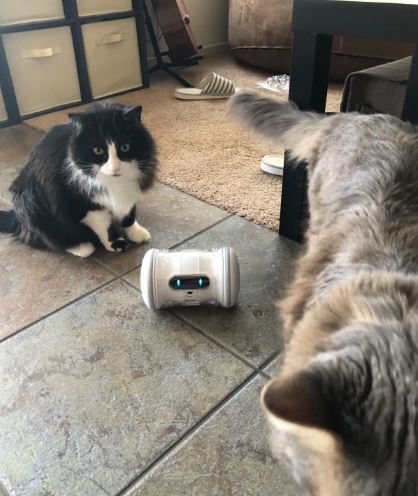 The fitness bot is made out of a polycarbonate material that can withstand up to 630 pounds of weight on it and has been tested by the FDA to be pet safe. So there will be no unfortunate accidents with our pets being poisoned when playing with their friendly robot. Even pet’s these days are safer than kids were 50 years ago with their lead painted dollhouses. The body being so durable is what makes chalking out the money for a robotic pet toy less stressful since it has been tested with large dogs for both bites, scratches and gnaws.

That being said, the VARRAM fitness robot comes with a protective case that is vital. When you are dishing out for an artificially intelligent robot toy for your pet you want to make sure it lasts. Despite all the testing they did to ensure the robot is durable, its better to be safe than sorry when a robot’s life is on the line because robots lives matter. The case clips on and fully encloses the main body of the fitness bot. That way all the scratching and bite marks dig into the replaceable case and you can get a new inexpensive case when it gets too unsightly.

Not only is your dogs’ new toy a robot but it is a robot powered by artificial intelligence. If the robot revolution ever comes you better have some means of protecting your ankles. The AI in the fitness robot is utilized specifically to traverse the environment without crashing into objects, walls or people. The AI also plays a role in determining the optimal times and durations for engaging your pet. The VARRAM can even detect your pet’s strength and determine which times it should be rewarded for playing. The future is here and your pet is seeing it first. 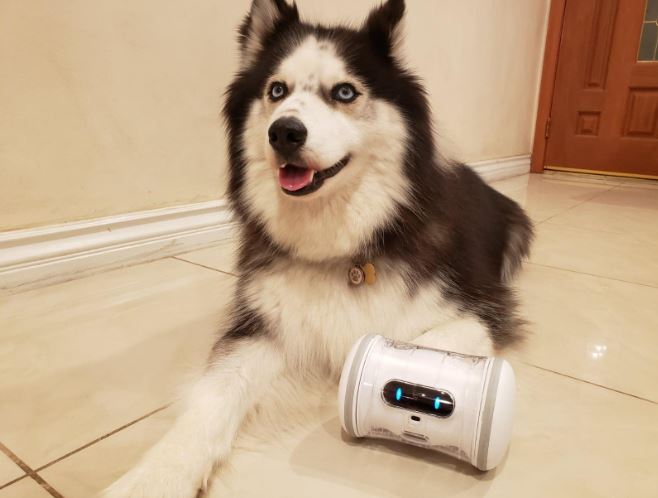 Having the app on your phone is a necessity for utilizing the fitness robot. You are able to manage the play time, choose play patterns, see the toss count when your dog got a little overzealous, and even set schedules for activities. You even get metrics on play statistics in order to track your pet’s fitness. I think I need a fitness robot for myself because I just might be in need of tracking my fitness stats.

With the phone app you are able to play with your pet using the robot manually via a Bluetooth connection. That includes charging your pet and chasing it down the hallway or running while it chases you. Though hopefully the ability to play with your dog using a robot doesn’t inadvertently decrease your own personal fitness while it is increasing your pets. Make sure you get up every once a while and run around too. 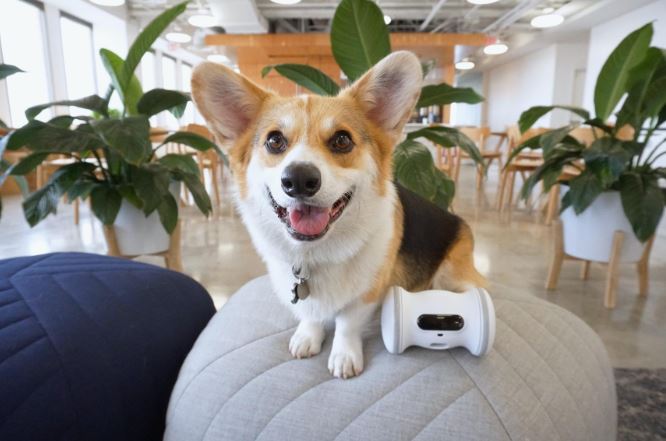 In the app you are able to customize your pet’s profile with breed information, health status, set how intense you want to robot to get with your pet. Plus if you have multiple pets you can set more than one profile. The built in training program that was created with the cooperation of veterinarians and pet trainers was designed to help get your pet adjusted to engaging with the robot.

As far as the battery life is concerned you can expect about 4 hours of play time before the robot gets tired and gives up. So settings a play schedule for your time away is important in order to spread out the battery life over the entire duration. You charge the robot with a micro USB charging cable that’s included but I would like to see a version in the future that has a charging pad and knows to head back to the pad during idle time. 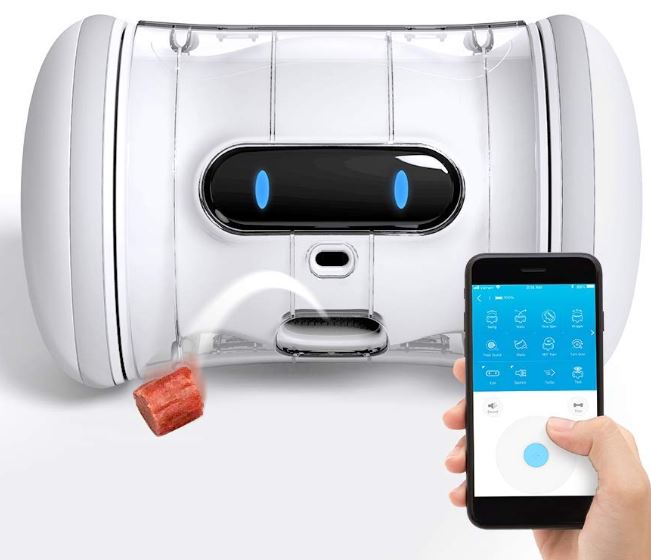 I would definitely not recommend you let your larger pets play with the VARRAM fitness bot if you do not have the protective case attached because the financial risk is a little too high. Aside from that adding a robot companion for your pet to your household is a perfect way to embrace the future. 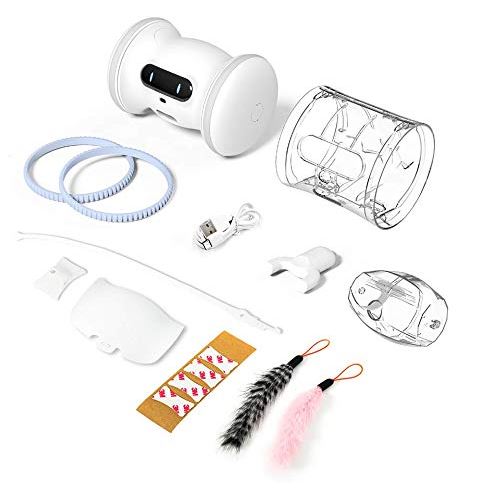 I may be a little biased because I am a pet lover myself, but I love the idea of this product. Any responsible pet owner cares for their pet. Your pet is a living creature that needs to be physically and mentally stimulated in order to maintain its health, just like a person. Seeing AI being used for such a loving task as keeping your pet happy seems like a perfect example of technology positively impacting our lives in the little ways that count the most. A happy pet makes a happy pet owner and the VARRAM pet fitness robot helps make your pet happy.