Judging by the success of its Kick-starter crowd-funding campaign, many agree with California-based Wearhaus claims that they have struck upon a new idea to have “reinvented” wireless headphones.

The Wearhaus Arc is a pair of Bluetooth headphones that combines the social element often associated with music and the conventional idea that you want privacy when listening to your tunes. How? Well the Arc lets you sync with your friends’ Arcs too – it’s been advertised as the first pair of wireless cans that boast a mesh/topology network built on top of standard Bluetooth audio profiles. 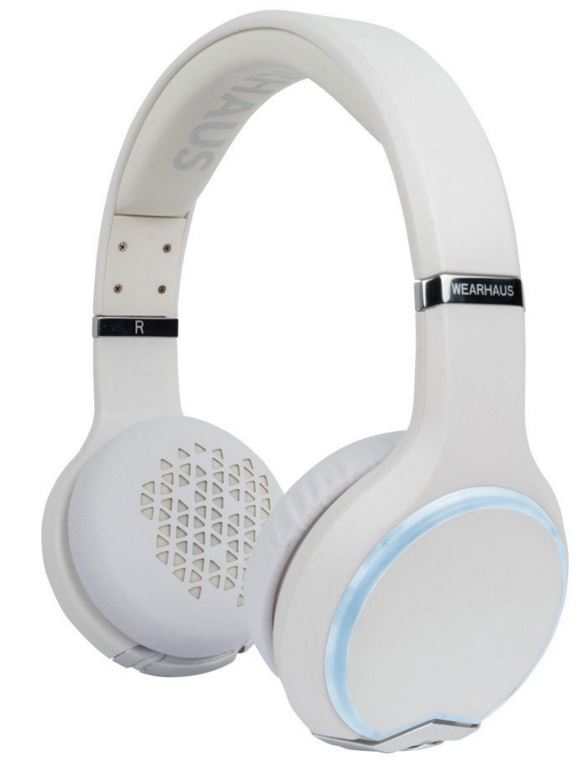 While headphones serve a certain purpose when you really just want to go off into your own magical musical world alone or when you want to drown out the irritating people around you, there are some things you lose when you plug into one and you plug out of another environment.

Sharing music with friends and loved ones is one of the aspects lost. A new headset trying to get crowd-funded in order to bring that fun and social aspect back to music listening and sharing, even as you will have your own device in your ears and on your head.

A light-up ring with changing colors is featured in each earphone. Users can set this color in the app, which will automatically change when connecting to another user is made to match their lights. 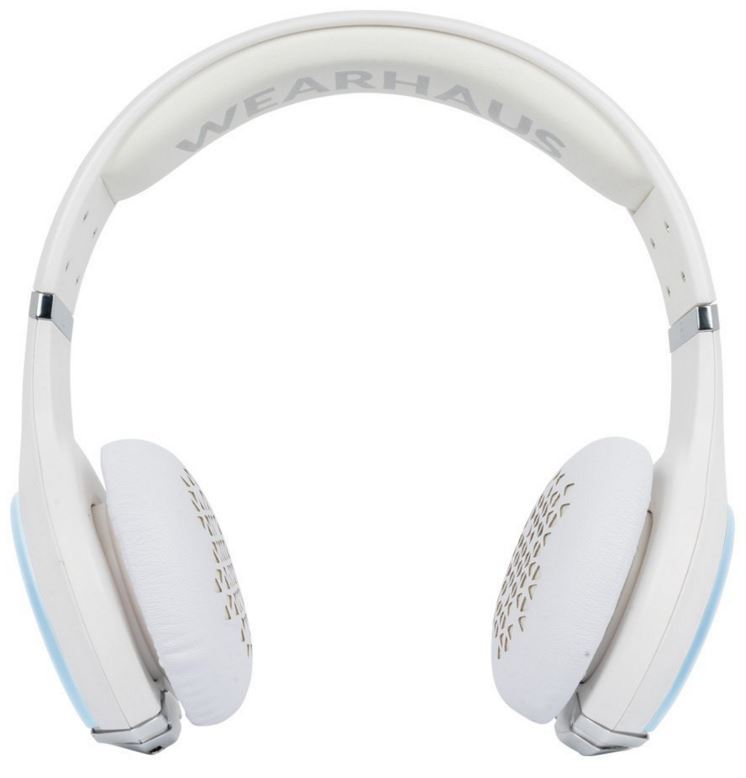 The right ear has a touch panel which is also used to control volume and playback through a series of swipes. Swiping up and down adjusts the volume, while swiping right or left changes the songs. Inline controls aren’t an option, since this is a Bluetooth headset, so this feature could be quite nifty.

Warehaus has cleverly included 40-mm drivers with a 20HZ to 20kHz frequency range for sound quality. Only time will tell if the team delivers, but they are promising a full range of quality sound from highs to lows, let’s wait and see.

With no active isolation, the team instead is using memory foam to passively block out external noise while also including comfortable pads for prolonged use. Battery life, as this is a Bluetooth headset, is a problem users need to think about. What Warehaus is committing to is 10 hours while sharing music with others and 16 hours of playback time individually.

Outdoors, the range of the signal reaches 30 yards, while indoors is reduced to a little under 20 meters. The sharing of your music tracks is managed through the downloadable Wearhaus App: currently the maximum number of units connected simultaneously, sits at six, but it should be possible soon (with the firmware Wearhaus upgrade) to expand the number further.

The LEDs on the ear is another feature of the Arc where the color can be set by the app. In addition to communicate their color preference or simply their mood, LEDs also act as indicators enabling song sharing. For synchronized playback, when you connect the headphones to another user, the LED takes on the color set by the user who manages the sharing, which is also possible when the lights are required to be completely switched off. 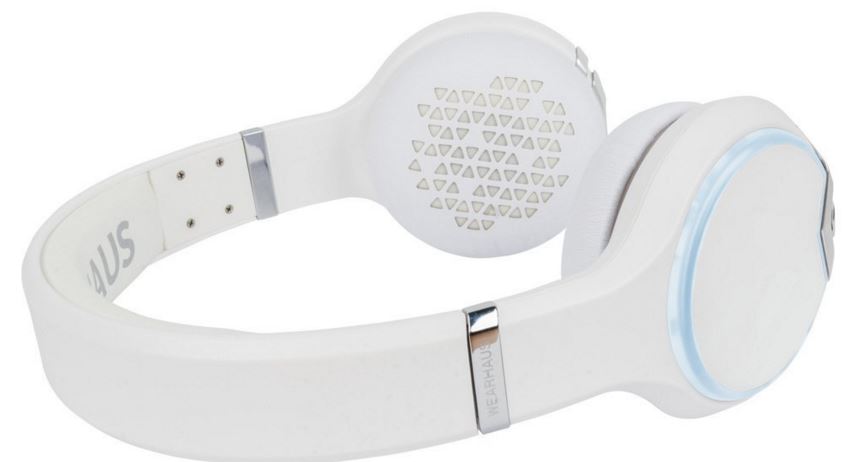 Integrated in the right ear, the playing of songs can be controlled through touch controls. To play or pause requires a simple touch, while an up or down, backward or forward movement adjusts the volume or changes tracks.

Wearhaus Arc stands out from other headphones crowds by being more social, while at the same time maintaining the sound quality you’ve come to expect from this kind of gear. The developers say that they’re the first kid on block to, even while you’re plugged into your individual headphones, can let you sync up wirelessly and share what you’re listening to with your friends.

This is generated through a mesh / topology networking protocol aside from the Bluetooth audio profile that is pretty standard for wireless headsets. For now, it works with as many as six people wearing the headphones with a range of 100 feet when outdoors and 65 feet indoors.

The Wearhaus Arc also boasts customizable LED light rings which will make your headsets look pretty Star Wars-y, apart from the ordinary sharing of music with your friends. They can even match up your station by syncing to your color if you’re broadcasting you’re listening experience.

The touch-sensitive panel on the right ear-cup that allows you easy control playback, without having to unplug your music player or smartphone device, is another great thing the headphone can add to their swag-list.

The kick-starter project quickly reached its funding goal of $50,000. So, if you want to get your hands on the Wearhaus Arc it’s priced at around $159. 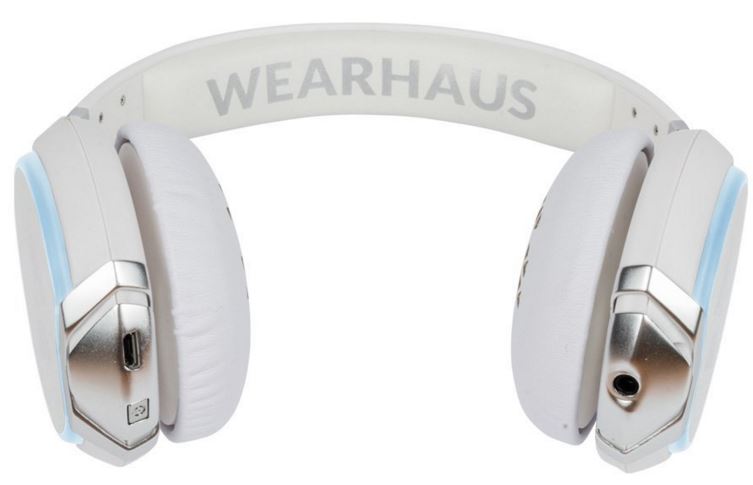 Headphones are a solo experience, generally by their very nature. They block out the user’s world around them and enclose them with their music or perhaps motivational audio. Wearhaus aims to change that by allowing users to connect and share streaming music with other Arc wearers with its new Arc headphones.

There are other sharing services like Spotify, where it’s easier than ever to share the music you love with friends, but this kind of sharing is quite impersonal, which is what the production team at Warehaus are working to fix.

Sharing your tunes is done through Bluetooth and a mesh / topology networking protocol developed by the team. So, if a friend with an Arc headset comes round, they can adjust a few buttons in the app or double-tap the touch panel on the right earphone and join you. The host is able to adjust privacy setting via the app, so one can change it to allow only friends to jump on and join the party. 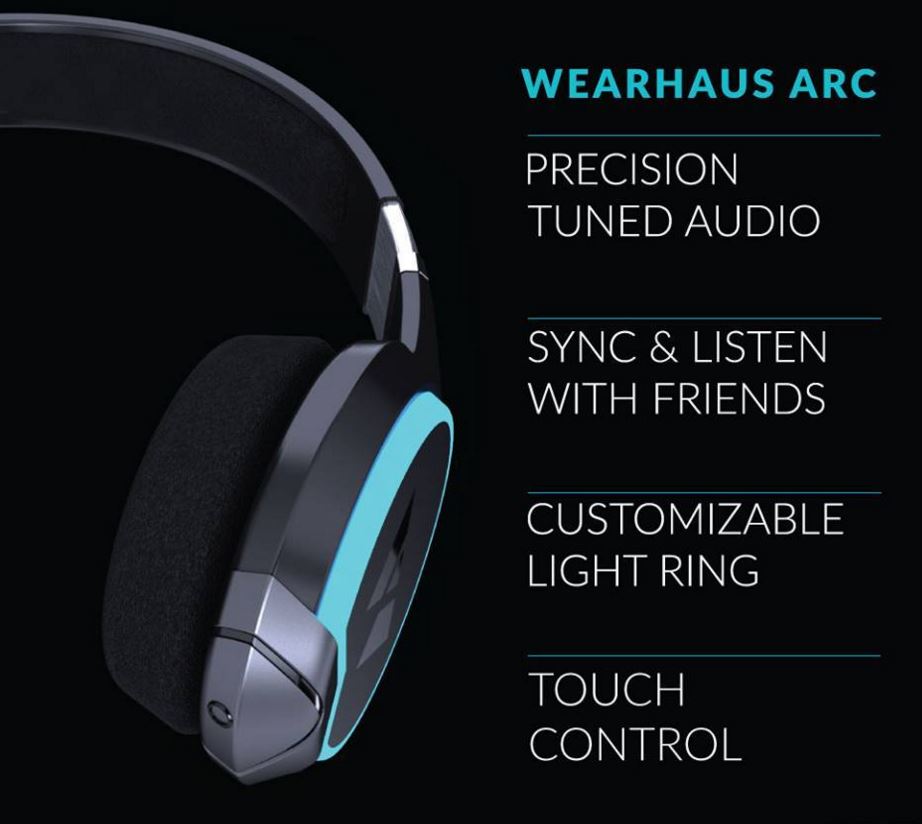 Supporting music sharing from all apps is a key thing to mention about the headset. This means users will be able to share music from iTunes, Pandora, Spotify, and others. This feature is applicable across both Android and iOS platforms.

The Wearhaus Arc headphones show distinct signs of lasting appeal in a very competitive market. While some problems exist (which could be overcome with a promising app update) with its current build, this niche concept at making your music social could actually catch on like moths to a flame.

If Wearhaus fixes the nagging issues here, namely the recessed power buttons and touch controls, the company will have crafted some seriously premium ear-cans. What’s crucial of course is that the social features meet a similar level of quality. So, keep connected to see whether Wearhaus’s tweeters are worth raving about.