If you’ve ever looked inside the options menu for a PC game, then you’ve probably come across the term V-sync. Many of the options settings inside PC games are obvious about what they do, like those for resolution size and texture quality. But some of those options, like V-sync, may seem all but inscrutable. That because you need to learn a few things before it’s possible to understand those settings. But once you do, it can be possible to always find the right V-sync settings for your games.

From a technical standpoint, streaming a video is quite different from playing a videogame. Videos are completely pre-rendered material, which means their contents only need to be read to your monitor from memory. It’s like having a finished product in hand. By contrast, running a videogame involves actively rendering huge quantities of frames each second. It’s as though each and every frame on your screen is being painted by your GPU.

Those paintings are presented in rapid succession on your monitor, which help creates the illusion of motion. That’s why generally speaking, the more frames you can create, the smoother the image on your screen. If you’re watching something around 5 frames per second, you can visibly see each frame change, from one to the next. At closer to 100 FPS, what you experience is more like a fluid image.

But here’s the tricky part. As your GPU is pushing out those frames, your monitor is trying to keep up. The total number of frames your monitor can produce in one second is reflected in its refresh rate. Most inexpensive monitors operate around 60Hz, which means they’re capable of producing 60 frames per second. That means when your GPU starts producing more or less than 60 FPS, strange things can start to happen. 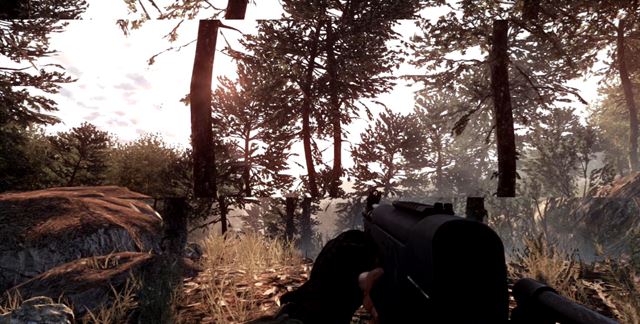 If your GPU is creating more frames than your monitor can display, it produces a visual effect that’s called screen tearing. Your monitor is unable to properly sync the content it’s being fed. The result is the image on your screen looks cut in half, as though two separate frames had been laid over each other. And that’s more or less exactly what’s happening, your monitor is taking more data than it’s capable of handling, and there’s a visual spillover on the screen.

Developers solved this problem by creating V-sync, a software based solution to screen tearing. It works by attempting to match a GPUs frame output with the refresh rate of your monitor. Most people use a standard 60Hz monitor. That means when they enable V-sync, the maximum number of frames produced by their GPU is locked to 60 FPS.

By syncing your frame rate and frame output, you can avoid the kind of syncing problems which produce screen tearing. That’s because your GPU is essentially lowering itself down to match the performance of your display. Technically speaking, a GPU achieves this effect by temporarily freezing the game engine, or by proactively buffering future frames until your monitor is ready to move on to the next frame.

Should You Turn Off V-sync?

Whether or not you should turn off V-sync depends on a number of factors. It depends on the games you’re playing, the monitor you’re using, possible driver conflicts, how powerful your computer is, and even your personal preferences. There are countless circumstances where v-sync should be used, and just as many where you should turn it off. Here’s a quick overview of some of the more common reasons why you’d think about changing v-sync. 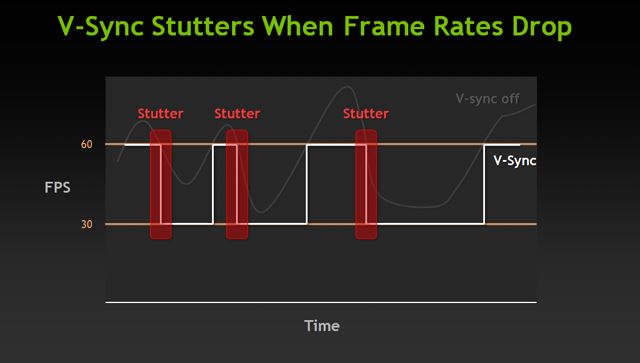 There are disadvantages to forcing your GPU to slow down. While future frames are being held in memory, you may feel your keystrokes are slightly delayed. For slower paced games, that’s not going to be an issue. But for playing a fast-paced game where snap-reactions are necessary, that slight delay can be extremely annoying.

If you turn on V-Sync you might observe performance that isn’t as responsive. You may click your mouse to fire a weapon, and notice a delay that wasn’t present before. Sometimes times this delay is scarcely perceptible, but it’s often something you can feel, and it can get in the way of competitive gaming.

Additionally, when you’re playing a game and encounter a particularly graphically intense moment, V-sync can lead you into further performance problems. Having more stuff on your screen literally makes your GPU work harder. That strain on your card can push down your frame rate, which leads you into even more issues.

Turn off V-Sync If Your Computer Is Struggling

If you activate V-sync on a 60Hz monitor and your GPU starts to produce 40 FPS, you’ll lose additional frames as your GPU chokes. These problems can be alleviated by activating what’s called “triple buffering”, but toggling that setting can lead to other issues. Nevertheless, before you deactivate V-sync because your computer is struggling to produce a steady framerate, give triple buffering a try. But don’t be surprised if you end up turning off V-sync. For games that are extremely challenging your system, it can be advisable to turn it off. A stuttering framerate is generally worse for immersion than screen tearing. 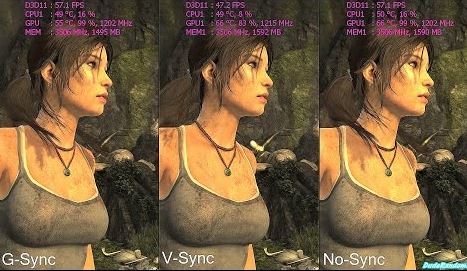 By default, your GPU is going to try and create as many frames as it possibly can. If you load up an old game that your GPU can handle with ease, you may notice your game clocking around 200 FPS or higher. But if you’re using a 60Hz monitor, then that’s 140 FPS your GPU is creating that has no impact on your visual experience.

Yet those extra frames are produced, which costs electricity and produces heat. V-sync can prevent you from producing those extra frames needlessly, and keep strain off of your GPU. Since heat is ultimately what wears a GPU to its death, running V-Sync can help you extend the lifespan of your hardware, literally saving you money.

If you’re someone who has a 144Hz or 240Hz monitor, you’re going to have a different relationship to V-sync. For V-sync to work on a 144Hz monitor, you’d need to be producing a steady rate of 144 FPS. At that point, V-sync is somewhat useless because even if screen tearing occurs, you perceptually won’t see it occur. In other words, anyone running a high resolution monitor and producing higher frame rates won’t have to worry much about running V-sync.

Additionally, there are a number of popular alternatives to V-sync that affect whether or not you need to use it. NVidia’s GSYNC or AMD’s FreeSync aim to eliminate screen tearing without the drawbacks of V-sync. They do that by something called adaptive sync, which helps a monitor sync its refresh rate to match the number of frames it’s receiving at any given moment. 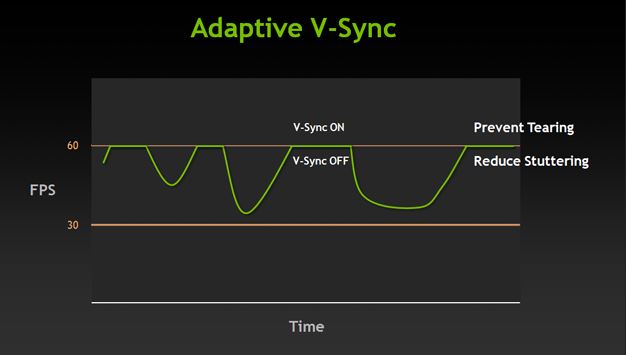 For that to work, you need a G-sync or FreeSync enabled monitor, in addition to a GPU that supports one of those technologies. In other words, you can’t use a FreeSync monitor with an NVidia GPU, or use a G-Sync monitor with a GPU from AMD. And you can access neither technology with a GPU alone, you need a monitor that’s been specifically built to support those features. Although both features do essentially the same thing, you can find FreeSync on essentially any type of monitor, while G-Sync tends to be an expensive feature reserved for high-end displays.

Should You Turn Off V-Sync?

Choosing to run V-sync is something that you need to consider on a game-by-game basis. But there are some times you definitely want it off. If you have a FreeSync or G-Sync enabled monitor and matching GPU, then you don’t need to use V-sync. If you’re playing a game that your computer struggles to run, you don’t want to add to the problem by using V-sync.

If your frame rate is below your refresh rate, then you don’t need V-sync, it will only cause you further problems. You might end up with worse frame rates or input lag, which greatly offsets any benefits you might get in exchange. But if you’re thinking about turning off V-sync because its lowering your framerate, try enabling triple buffering first. You may be able to adjust your graphics settings to get up towards a consistently acceptable framerate.

If you’re using a 60Hz monitor, your GPU is producing a steady supply of at least 60 FPS, and you’re experiencing screen tearing, then turn on V-Sync. When you’re playing an older game, turn on V-Sync to keep your system cool. Besides that, you’ll mostly want to keep it off. But as with many things in life, the best way to find out if you should try V-sync is to test for yourself. Load up your favorite games and see whether or not it works for you.