You’re headed off on a four-day trip to see a friend, so who’s going to take care of your pets? Paying pet-sitters can be costly. But what if you didn’t have to worry about stepping out for a few days? What if you only had to spend a quarter of the time on feeding? That would be a bit like having training wheels for your pet care, much easier and safer all around.

Whether you’re traveling or not, you can achieve all those effects with an automatic pet feeder. But if you’re really going to hand off the safety of your pets to some device, you want to have deep confidence it can handle the responsibility.

That means knowing that the machine can deliver the care it’s supposed to provide, under all circumstances. What happens if the power goes out? What happens if some type of jam develops inside the food dispenser? If you don’t want the worst to happen, you need to know if the feeder is fully reliable.

Automatic pet feeders aren’t a totally novel idea. You can find examples of them going back for decades. But early designs had a lot of significant limitations. You had issues with cleaning and management, and that’s without getting into how costly those kind of devices could be. But in the era of smart-homes and smart devices, higher quality automatic pet feeders have become a lot easier to find, and a lot safer and interconnected.

The Wopet Automatic Pet Feeder is one of the more recent pet feeder devices on the market; and it’s supposed to allow you to schedule days or weeks’ worth of feedings. But more than just keeping your pets alive, this dispenser is actually designed with a lot of healthy dieting in mind. It’s great for providing food at a healthy regular interval, which can serve as a sort of dieting mechanism for obese pets. And again, it’s also quite handy for feeding pets while you’re not around to do it yourself, largely due to its higher than average food capacity. 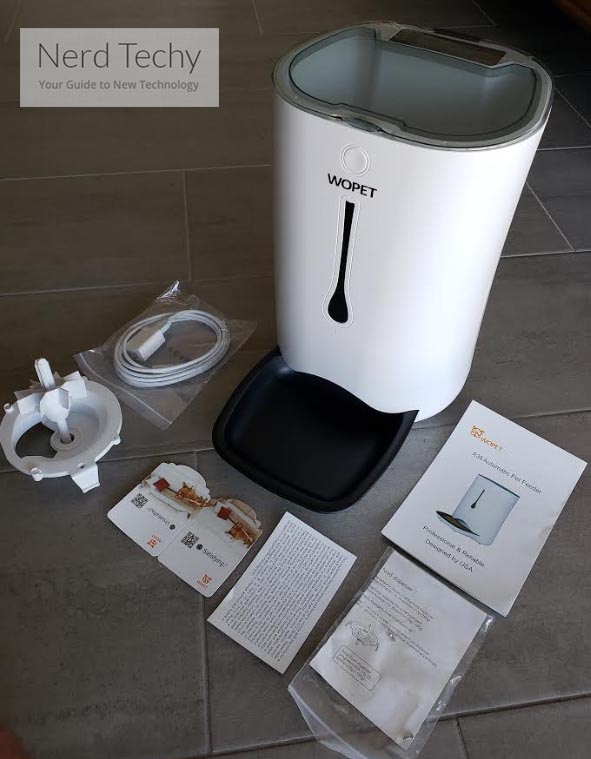 But not every pet feeder will work equally well for all types of pets. Depending on how many animals you have to feed, and how large they are, you might need something a bit larger than the Wopet Feeder. With that said, people who have smaller animals, or perhaps one large dog, will likely find the capacity of this feeder to be more than satisfactory.

The feeder measures 15.3” tall, with a wide 13.7” diameter base that isn’t going to get easily knocked over by rambunctious pets. And the feeding tray is about 10” across, making it accessible for more than one pet at a time. At least, if your pets will allow for that kind of civility. The storage compartment is very large too. It can store a total of about 20 cups of food in total.

The machine itself isn’t that heavy, it weighs about six pounds. At least, before you’ve poured food inside. Different types of foods have different densities, especially because some carry more moisture than others. So depending on the food you’re using, the final weight will vary. But this device could easily weigh in excess of 35lbs. That’s probably why they’ve designed it with such a wide base, so the weight is nicely distributed. 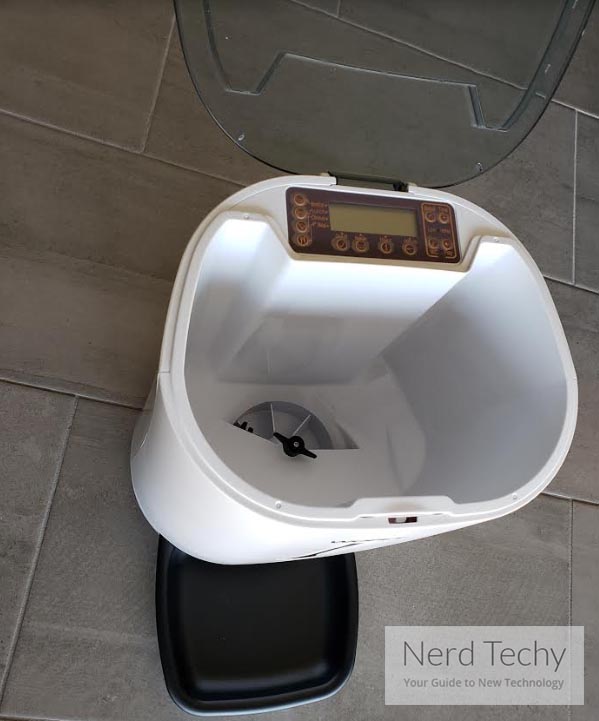 Another thing to notice is how the top-lock design prevents the food from getting knocked across your floor, even if the machine is tipped over. Pets who are a little too excited about eating are unlikely to tip over the device to begin with because of how the weight is distributed. But if it does happen to fall down, you won’t have a mess on your hands.

The Wopet Feeder is technically wall powered, but you can install batteries to be used as a backup. So if there’s a power outage, the device can continue to feed your pets even while the power is out. It actually operates with a total of three D-cell batteries. It’s nice to have the option of backup, similar to having a battery installed inside alarm clocks. Should that interest you, then you’ll need to pick up batteries separately. Because those aren’t not included.

While staying on the topic of safety, there are a few more things to notice about the design. The inside of the machine makes use of infrared induction technologies to help detect blockages. Once something is detected, the machine will spring into action to help break them up with a portion wheel. It means you don’t have to worry about some kind of worst case scenario, like the machine getting stuck while you’re on vacation.

As mentioned before, it’s possible to schedule a total of four automated feedings each day with the built-in programmable timer. That can be done through the analogue touch interface, which basically looks like a large calculator LCD. You can program each meal with only a couple of button clicks using the fairly display and fairly intuitive interface. 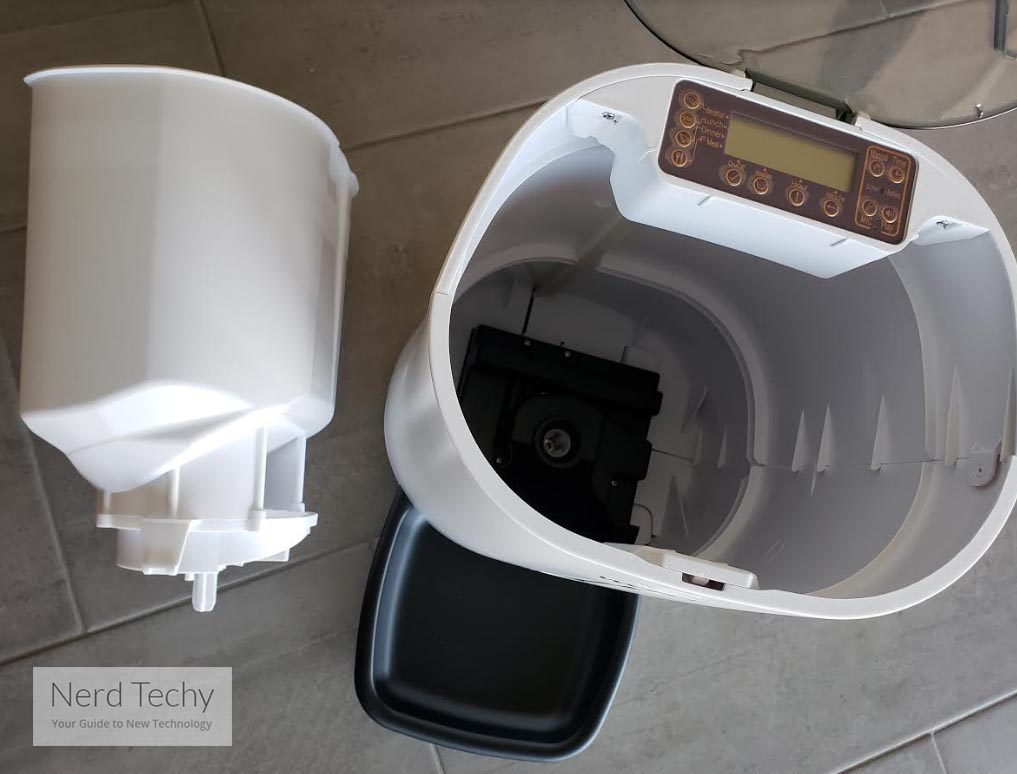 Portions can be controlled in segments between 2 teaspoons and 4.5 cups for each feeding. That’s quite a range of options for smaller animals and larger ones alike. Two things to keep in mind, though. The inside of the Wopet container is suitable only for dry foods, and not wet foods.

Wet foods would not be properly dispensed because this feeder was made to anticipate hard chunks of food pellets. But within the confines of bagged pet food, you’ll find this feeder can accommodate basically any brand you throw at it. Food pellets should have a diameter between 0.2” and 0.6”, which really doesn’t put many limits on you. 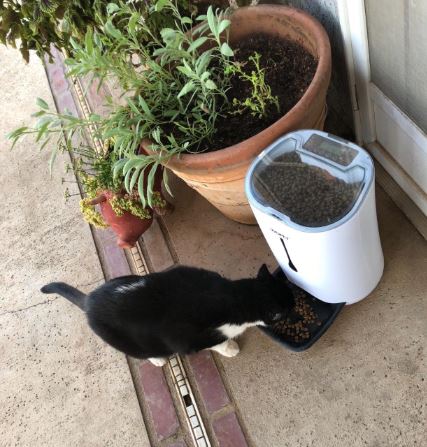 Even dry food is going to make a mess eventually. At some point in time, you’ll want to remove the feeding tray and wash it down. Fortunately, you’ll find the feeding tray is dishwasher safe, and it can be removed for cleaning quite easily. It basically pops right out, allowing you to get in there and clean every corner without having to get water near the electrical components of this machine.

How will your pets know that food has been dispensed? As you probably know, when you run a can opener, cats are able to learn that sound means food. You can teach your pets that food is coming with a number of audible cues given away by the machine. That’s because you can record custom messages for your pet to hear, which can be used to announce mealtimes or just let them hear your voice. You can use basically any sounds you want, though since you have to record from the device, there are some soft limits to your options. 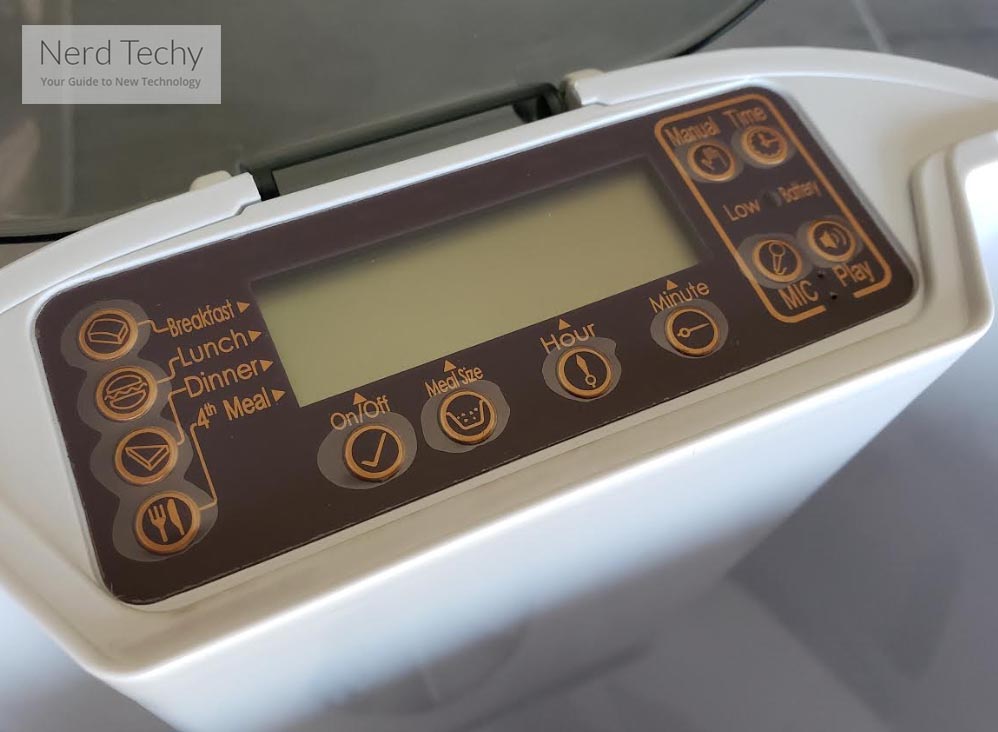 Tucked away on the bottom of the unit you’ll find the control interface. It allows you to establish different quantities of food that are released for different meals, at different times of the day. You can establish how much food, when the food is distributed, what sounds are played for each meal, and so forth. It’s all pretty straightforward and intuitive, though it does take a moment to setup for the very first time. 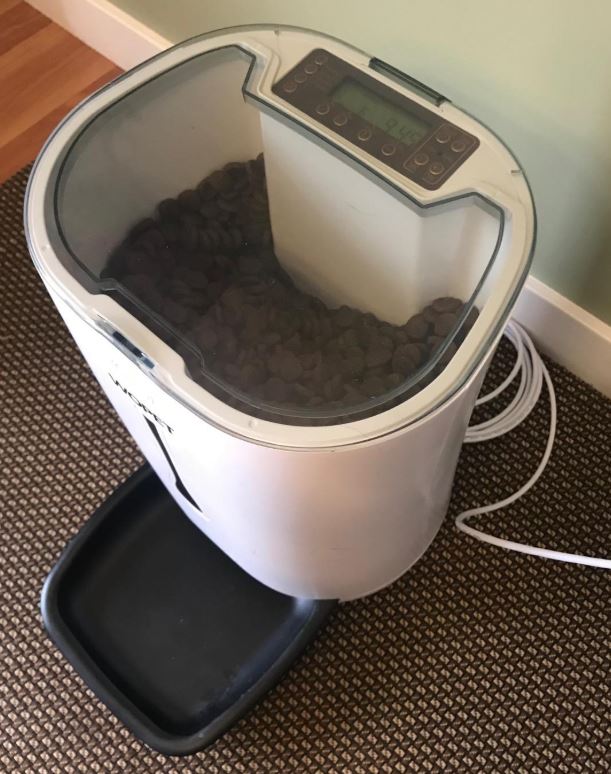 Especially if you end up needing to make a more detailed configuration for a more complex diet. But if you’re keeping it simple, the two default portions are small or large. But again, it’s possible to use your own best judgement about how much food your pet needs over the course of a day. You don’t need to rely on the presets, but having the machine giving you guidelines is pretty helpful as a start.

One thing this machine really feels like it lacks is app support. These days, just about everything has some kind of app. It probably won’t be long until we’re all using Wi-Fi connected toothbrushes that can tell us exactly how long we’ve been holding the brush, and when we need to replace the bristles again.

Seeing so many clear opportunities for effective wireless connectivity, it’s a shame that you can’t do some of your management through an app. However, not having Wi-Fi connectivity actually brings down the price of this unit, and it’s one less thing you have to worry about connecting online. 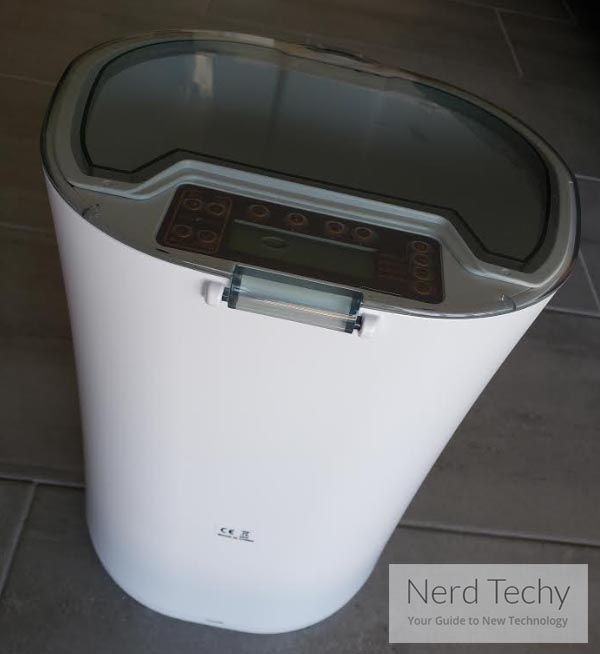 Thankfully, it’s not possible to manipulate the feeding wheel to dispense food when it’s not intended to be dispensed. So clever pets won’t be able to maneuver their way inside the box to get more food than that which is given to them.

Wopet includes a one-year warranty. They also include customer support over the phone, though this device is simple enough to use that it shouldn’t be challenging to work out for yourself.

Who Should Choose the Wopet Automatic Pet Feeder?

Being able to store 20 cups of food might seem like a lot to some people. Especially people who are trying to feed smaller 10lb animals, and those who aren’t chewing through immense mountains of food every day. With smaller and medium sized pets, that really is a lot of food. But if you’ve got four large dogs, you’re probably going to find that 20 cup storage a little bit more restrictive. 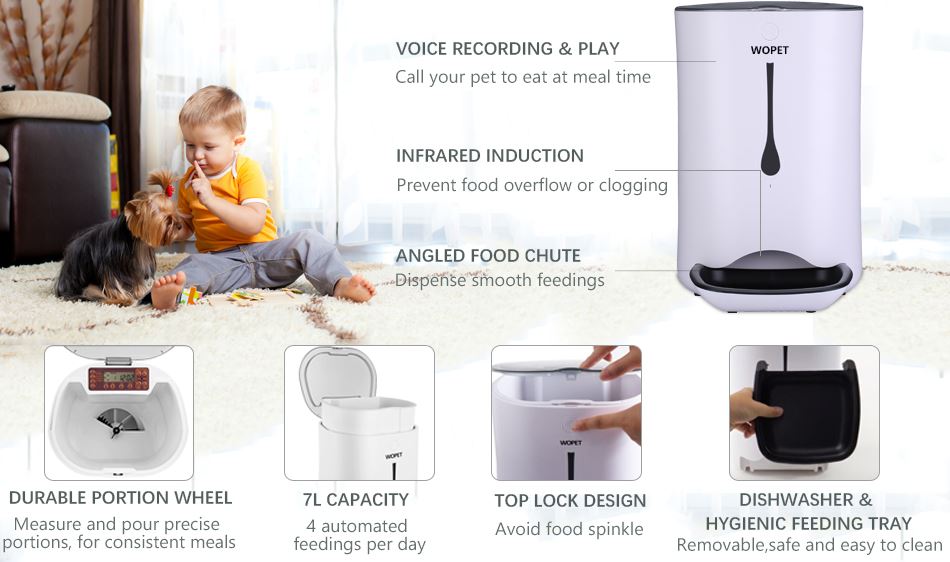 Assuming you don’t have several large dogs and you expect to feed them from a single device, you should find the Wopet Automatic Pet Feeder does have some pretty distinct appeal. Being able to feed reliably and generally unsupervised makes the Wopet feeder highly effective at what it does. You basically don’t have to micromanage this thing once you’ve got it setup.

It was made smartly enough to be easy to clean, and smartly enough to be highly adjustable. Basically any pet food on the market will fit inside, so unless you’ve got your pets on some kind of really obscure and exotic diets, this pet feeder really should get the job done. That makes the Wopet Feeder a good choice for people who understand the size restrictions and are okay with them.