Professionalism can be expensive. Someone who’s already made a couple videos probably understands. Go ahead, watch one of the major news networks. Look at how much effort goes into making everything look great. And for good reason, it builds trust and authority.

How would it look if news anchors were transmitting in front of a cluttered desk? What about inside a boring office room? What about if nobody bothered dressing to look their best? Perhaps appearances shouldn’t matter as much as they do. But they do – without a professional presentation, the message you’re sending into the world is eroded.

One of the most effective and ways to instantly increase the quality of your presentation is a good green screen. When people are just starting to get into video creation, they’re often surprised at the difficulty and expense of creating your own green screen area. After all, how hard can it be to hang a couple of green sheets?

As it turns out, in a lot of different circumstances, it can be both difficult and expensive to run green screens. With respect to material needs, you need pretty thick green cloth, and might have to double-layer the material if it needs to block light. With respect to setup, you either need to surrender a sizeable area of space, or you need to be prepared to setup and remove the green screen. Repeatedly. Neither choice is particularly appealing.

Which is exactly what draws people to digital green screen. As you may know, this isn’t the first time someone has tried to make virtual green screen effects before. In fact, there have been some options out there for nearly a decade. But most of them are either hysterically expensive or hysterically bad looking. The new VCam app was supposed to be a change of pace. 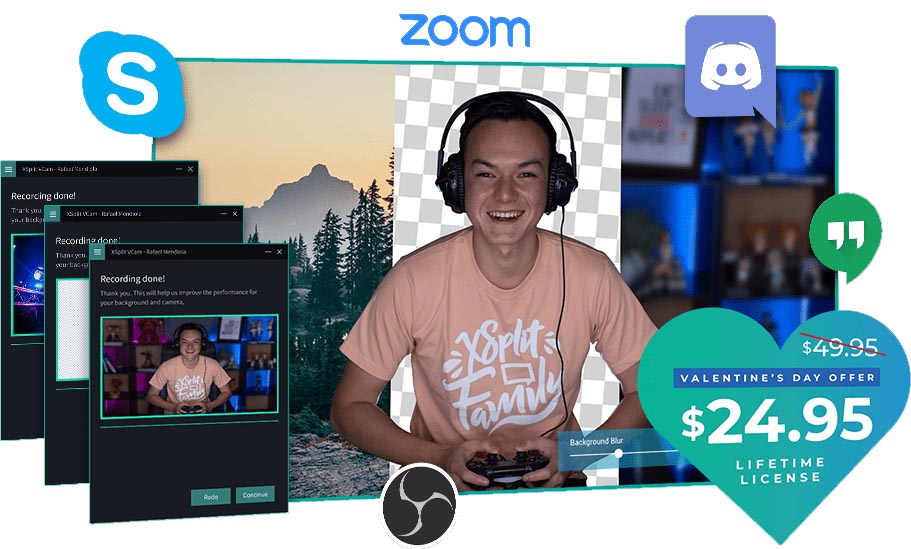 Among the many different names in the world of streaming, few are as big as XSplit. They’ve got one of the most popular streaming suites. And it’s easy to see why. Though deeply customizable, XSplit tends to make their stuff pretty approachable as well. Which made it a bit more exciting to learn that VCam was actually developed by the XSplit crew.

True to their brand, this app is intended for content streamers. More specifically, it’s intended to replace the need for traditional green screen. Think about the space required, the cost, and the installation time necessary for a green screen. Compare that to VCam. If the results don’t impress you, I don’t know what can.

Being able to get rid of all of that is pretty convenient. Logitech tried to provide this kind of feature along with one of their recent flagship webcams. It didn’t go very well. Their biggest failure was they couldn’t get lighting done right. Even though the green screen effect looked okay, the moment your lighting wasn’t perfect, everything went down the drain.

The XSplit VCam doesn’t seem to stumble with lighting whatsoever. You can blur, remove, and replace backgrounds as needed. And the quality of the image compares favorably with using an actual green screen. And similar to a real green screen, once you’ve got this app installed, your options for backgrounds are almost endless.

In some regards, this type of software is actually better than green screen. Because the moment you’re using a real green screen, you have to start being conscious about all the colors around you. Wear the wrong shirt? Holding the wrong pen? It might be invisible to viewers. You can ruin an entire take by accident, or ruin hours of work in seconds. 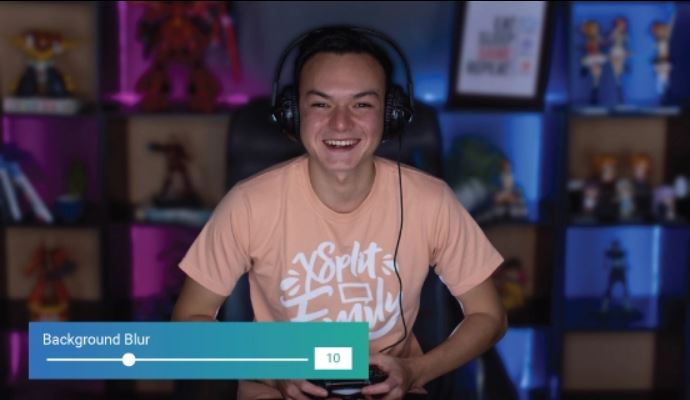 As a green screen, you’re able to change your background to GIF files, JPEG files, or even an entire website. But having the ability to run digital green screen doesn’t only mean you can change the image behind you. The VCam can also add a blur effect to your background, giving a DSLR style portrait effect to your shot. Great for hiding the mess behind you, or just giving off a stronger sense of professional presentation.

Of course, there are some problems. Like with regular green screen, detection issues tend to occur towards the edges of an object. But these issues are pretty similar to the kind of small issues you’ll find with real green screen, especially when it’s not done professionally. In other words, it’s something that’s pretty easy to forgive.

Similar to other digital green screen apps, VCam software runs as a separate app on your PC. Once you’ve got it installed properly, your PC will actually view the app as though it were a camera.

For example, if you were running this in OBS, you wouldn’t need to add your real webcam to the software. You’d want to add the VCam to run as your source instead. Because the VCam needs to work as a go-between point that connects everything else.

With that said, getting everything setup is fairly simple. During its earliest release, you were required to be an XSplit Premium member to actually try VCam app. I suppose you could call that a testing phase. But the testing went so smoothly, it was more like an early demo for the lucky few who were invited to try. 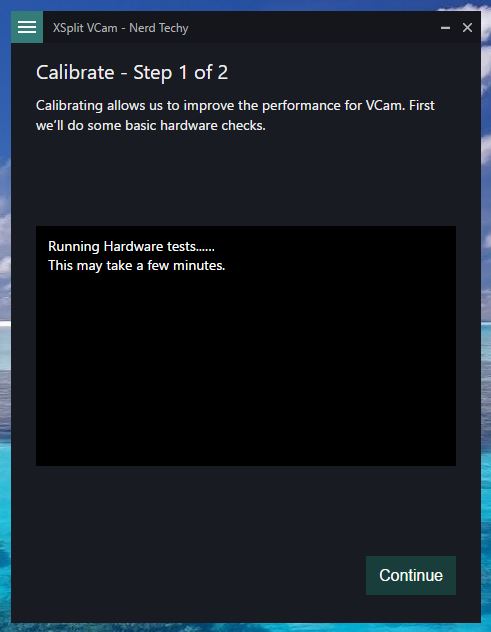 Anyway, before running you through a short setup process, the app ensures your system can accommodate the software. Unfortunately, like almost any streaming app, VCam can be pretty intensive on system resources.

You’ll want to have a 6th generation Intel processor, or a comparable processor from AMD. Luckily, you don’t need to worry about having a nice GPU. But it doesn’t help if your card was made in the last three generations.

One of the things that has made XSplit so popular is compatibility. You can use their streaming program alongside basically any other piece of hardware or software. It was specifically designed to work with as many other programs as possible. The XSplit VCam is very much the same.

VCam doesn’t require you stay married to XSplit. You can use this app alongside Skype, OBS, and other major video editing software programs. If you don’t have those kind of relationships established already, you’ll be pleased to hear that VCam also integrates well with the XSplit streaming software. Like you’d expect, the relationship between the VCam software and their streaming software is butter smooth. Almost as though they were made by the same company! 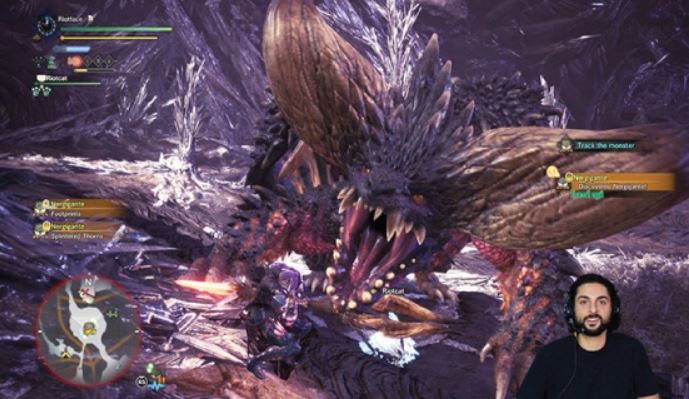 XSplit includes 24/7 tech support for VCam, alongside a promise of lifetime updates. Similar to the XSplit streaming program, VCam is sure to see some major improvements over the next few years. Though the current release runs fairly smoothly and doesn’t seem to have any serious problems with bugs, there’s always room for improvement. And it’s pretty cool when one of your apps suddenly gets better.

With respect to operating systems, you’ll find VCam will run on almost anything. Throw your Windows PC at it, throw your Mac or Linux machine, you’re not going to encounter issues. But when you start looking at hardware, things become a little grizzlier. At least, depending on the kind of machine you use to create and record videos. 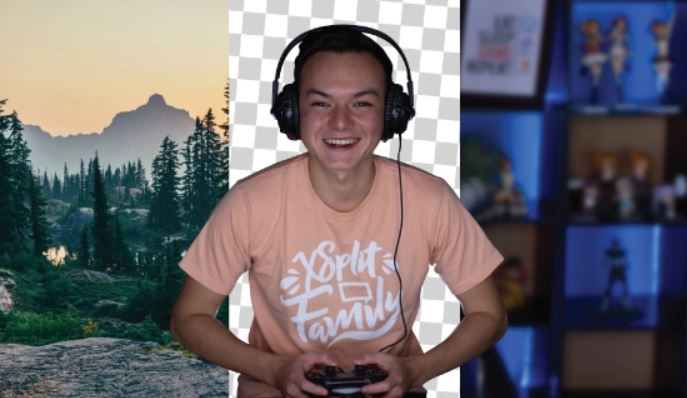 The GPU requirements aren’t heavy. You really won’t see your GPU peak above 3-4% usage while running this app alone. Which makes it great for running alongside games being played at higher resolutions, or being played with higher graphics settings. For gamers who are worried about their system performance being impacted by VCam, you don’t have to worry about your GPU at all.

It would be nice to have XSplit work on reducing the amount of CPU resources necessary for this app. While not many GPU resources are consumed, the CPU is another story entirely. If you’re using a reasonably modern Ryzen 7 processor, this app can easily eat through one third of your total computing power, leaving not much to spare should you want to run another CPU-intensive app or game.

For someone who’s using a very old CPU, and trying to play a CPU-intensive game, this presents an issue. As long as you’re following VCam’s guidelines, and you have a 6th generation processor or its equivalent, then you shouldn’t encounter any serious issues.

The XSplit VCam Webcam Background Removal Software was made specifically for content creators. Consequently, it has smooth integration with Twitch, Facebook, YouTube, and a number of other social media sites. But it wouldn’t be hard to see this application be useful outside of content creation.

For professional presentations of almost any variety, it could be pretty handy to have. Taking a job interview over Skype? Having the app ready to blur out the messy background behind you adds a bit of professionalism to your conversation. It also helps keep your privacy in-tact. Do you really want people looking at every detail of every object in your vicinity?

For content creators, the green screen effects a great way to improve the production quality of your content. Perhaps more importantly, VCam provides a terribly inexpensive means of doing so. It precludes the need for adding a bunch of additional lighting or green sheets, let alone all the setup time.

Used properly, VCam can be very effective at helping remove distractions, and ultimately providing clutter-free presentation. Its basic green screen effects are pretty nice looking, sure. But it’s only when you start to explore your customization options that you see what this software can really do.

Finally, you don’t have to get married to the XSplit ecosystem in order to make use of this program. Though made for content creators, this is a visual effect that anyone can appreciate. In ten years, something like this might even be a standard feature on video programs like Skype. Which makes it easy to recommend VCam for nearly anyone who cares about professionalism.

How to Recover Lost Files with iBeesoft Free …
December 14, 2021