Bikes are stolen all the time, and it’s not hard to see why. Even a cheap bike tends to cost a couple hundred bucks. Plus, it’s stealing something that literally has wheels on it. If you can find one unattended, you don’t need to be a genius to figure out how to steal one. And bike thefts are not often resolved.

So protecting your bike means preventing that theft to begin with. In a lot of cases, basically any bike lock can do a lot for you. Because most of the time, if a bike is locked, it’s not going anywhere.

Of course, an ordinary bike lock isn’t going to protect you from a determined bike thief. But it’s not really those extreme cases that people should be concerned with. It’s more about making your existing locking mechanisms more effective on a day-to-day basis. 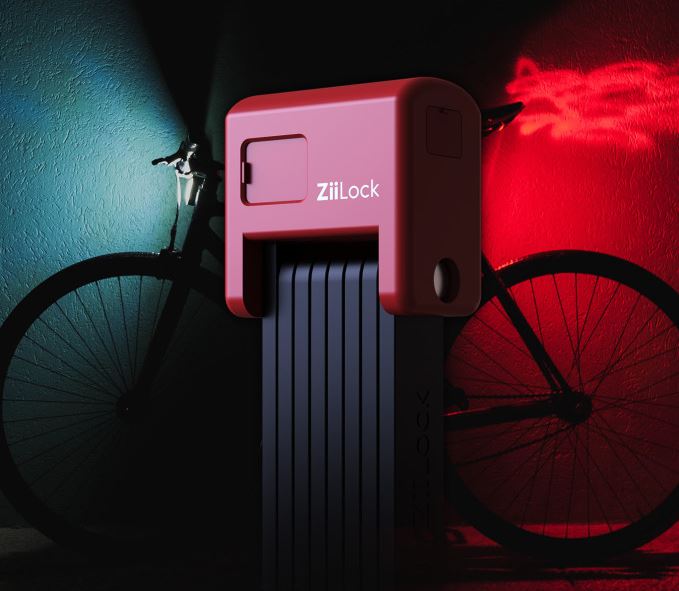 More than just being a lock, ZiiLock is a biometric bike guard. What’s the difference between this and a fingerprint padlock? For one thing, this lock was made specifically for bikes. As such, it’s got a far greater capacity in almost every aspect of its design. For instance, when it comes to where you can lock your stuff up, ZiiLock lets you access a pretty wide variety of areas. Even stuff with an enlarged circumference, like extra-large poles, can help you lock-up.

That also happens to give you a lot more places to lock and protect your bike. Don’t want to roll your bike into a shady alleyway with little traffic, even though it’s the only place to lock up? You can lock it in a more public area instead, if you’ve got the right locking system at least.

When it comes to accessibility, ZiiLock can be accessed with a key, like any other similar lock. But you can store the key at home for emergencies only. Because the lock is supposed to primarily be accessed with fingerprints, and with Bluetooth connectivity through an app on your smartphone. But how well does this thing work in practice? 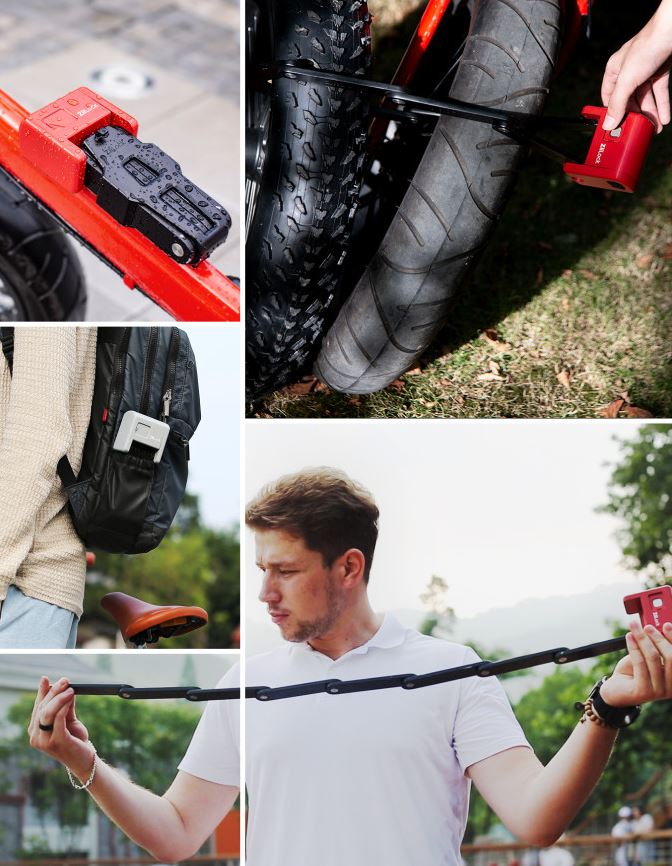 When it’s folded up, ZiiLock measures 7.5 x 5.5 x 2.9 inches. That makes it one of the smaller and more compact bike locks out there. And the size is something you can forgive, given the nature of its capacity to wrap around things. The mechanism itself uses a minimalist design that’s supposed to provide proactive cover and storage. The palm-sized design makes portability simple as well. An extra soft rubber surface protects the finish and paint of your bike. It actually feels nice in your hands.

Before looking at its capacity, it’s worth looking at the weatherproofing. Interestingly, ZiiLock operates with an IP67 waterproof rating. That allows you to use the ZiiLock inside or outside with confidence. For people who are using this as a bike lock, that’s pretty important. Because you don’t want your lock to break down the first time you run through a puddle in the road. Especially when it’s loaded with electronics like these. 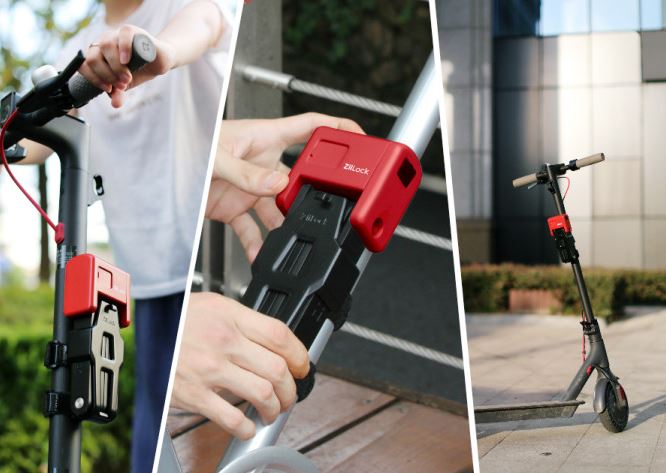 When it comes to security, the 98cm hardened metal links are supposed to be every bit as difficult to get through as a pad lock. Each section of the device is made from 6.5mm thick bars of metal, strengthened by being linked with 7mm rivets. All in all, this stuff is supposed to be able to take a beating without you having to worry about it. 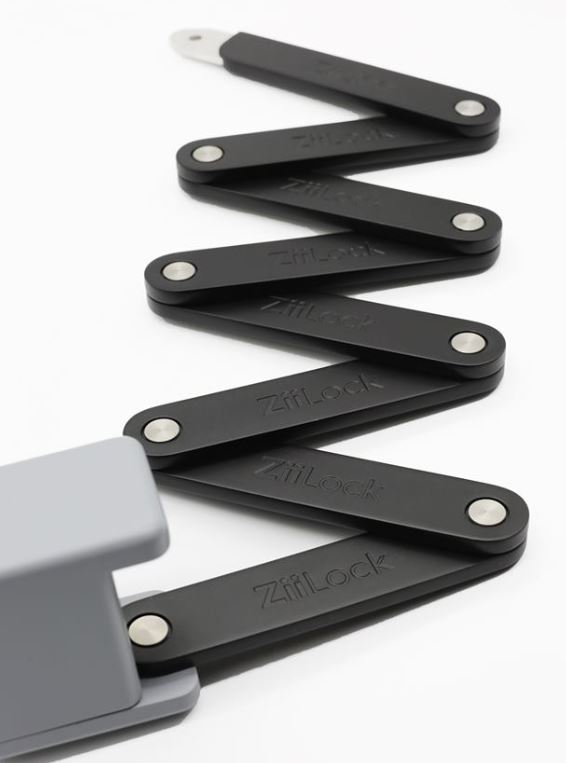 But the real protection comes from versatility. The compact and foldable design allows you to keep things as secure as if you were using a chain, except with the flexibility of something that can be folded up and put away. The total length of the chain-like design stretches out a total of 38.6”. So you can lock two or three big bike tires together in one loop. ZiiLock can be unfolded to even fit around trees or large poles. So you have no trouble finding big objects to attach your bike against.

The result is a device that’s supposed to withstand the attack of a 12-ton hydraulic cutter. Basically that means two things. It’s going to be incredibly difficult to steal your bike. And it’s going to be incredibly difficult to open this thing if you happen to lose your phone, spare key, and fingerprints all at the same time. It would also be pretty tedious to open the lock if the battery croaked on you, which is why it’s so important to keep that spare key in a safe place. 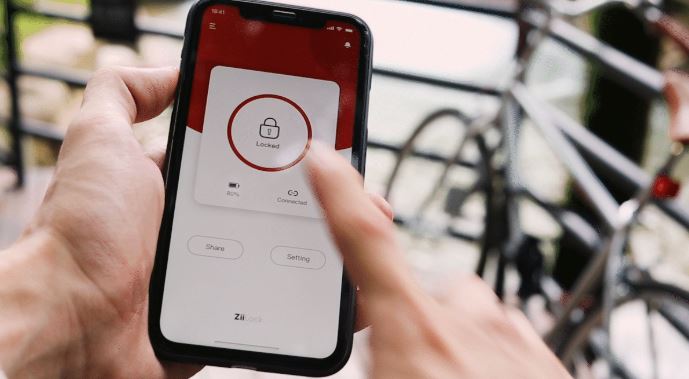 The ZiiLock is made with a fairly large 508DPI scanner, intending on capturing a very accurate image of your fingerprint. You’re able to store a total of 20 fingerprints inside the ZiiLock. That could mean 20 users with an index finger registered for access, or two people with ten fingers registered. Pretty neat.

Plus, the reader is very fast. The readout time is about 0.03 seconds. So the moment you touch the lock, it will either recognize you and immediately pop open, or refuse you. At which point you’ll that as well. And the sensing area for fingerprints is actually pretty compact, measuring about 0.3” x 0.3”. That’s just large enough for the tip of a finger, basically. Though the print reader doesn’t look much different than any other portion of the device, that may help protect the unit from hapless tampering. 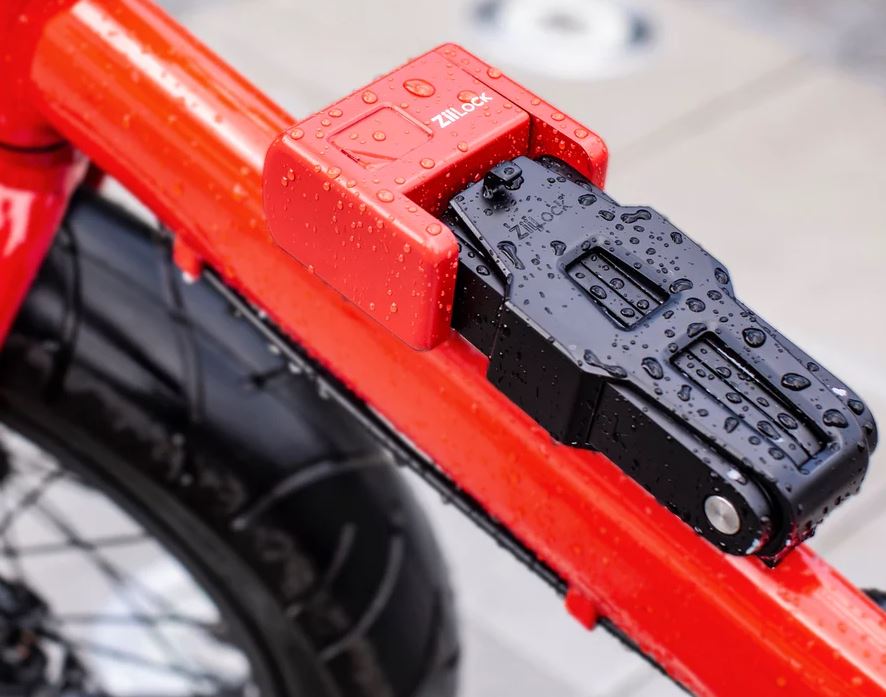 Speaking of the battery, the power consumption is supposed to provide protection for a total of 3-months from one charge. After the battery runs out, you’ll need to use the standby key, or recharge the unit. Doing so from a USB cable and portable power bank would be an optimal solution for that kind of scenario.

But the lower power consumption of the unit means you don’t have to worry about charging the lock on a regular basis. The lock can pretty much remain autonomous without intervention. Even if you’re using it on a pretty regular basis, you’d really only expect to need to recharge after 8-weeks. And that would be a bit of a worst case scenario.

Naturally, every device with a built-in battery has a finite lifespan. That means after 5-7 years of regular use, the battery inside this device will be worn to the point that you’ll always need the key to open it.

It’s pretty cool that you can still make use of the device on a fundamental level, but at that point, you’d have lost enough features that you’d want to consider replacing the lock.
Perhaps in the future, they’ll be able to rig this device so that it’s powered by the motion of the bike. But until then, this battery is a pretty suitable solution. 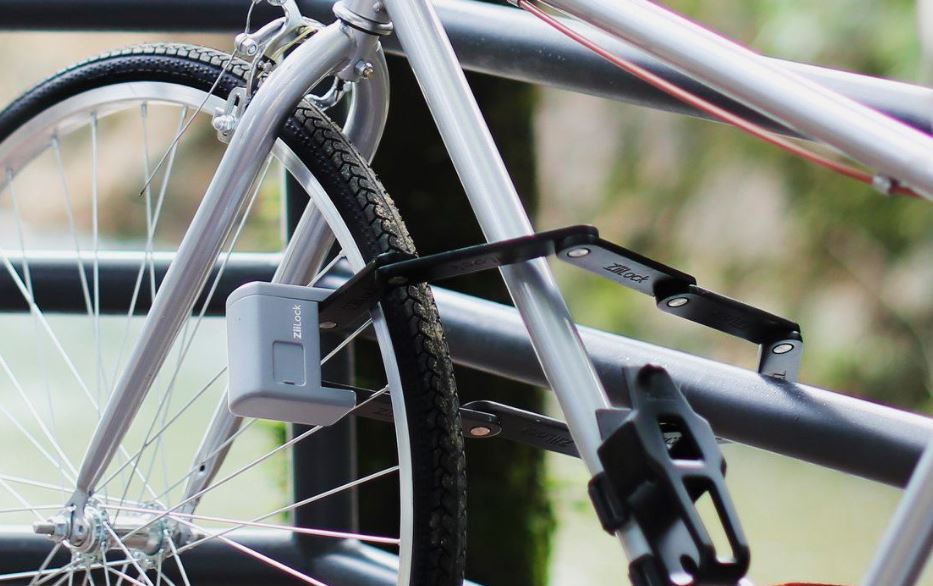 At the core of any smart-lock is a bunch of convenience-oriented smart-features. In this case, you’ll find a variety of lock sharing features allow you to give access to your ZiiLock to other authorized users. Share your bike with a roommate? You can share access without having to hand them a key. You can even remotely lock or unlock your bike as needed.

Of course, hardware is only one aspect of security for a lock like this one. But the AES 256 military-level encryption means that the software side of things is actually even tougher than the metal of the lock itself. Interestingly, given that it’s able to interact with the world around it, ZiiLock isn’t just a lock, it’s also an active warning system. It can even let you know when the lock is being accessed or interfered with an app-based warning. But more on that in a minute. 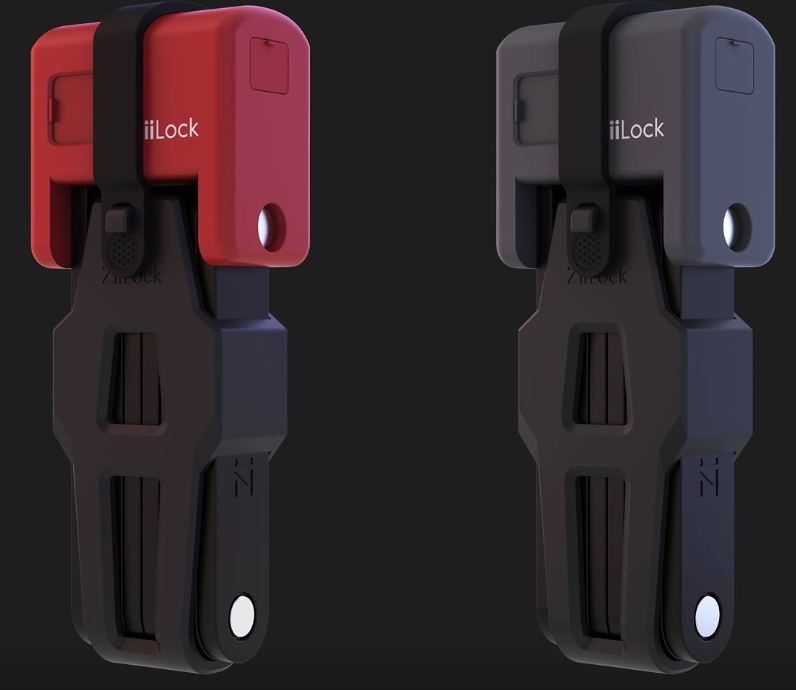 The Bluetooth connection can be pair pretty much instantly. That’s because of the always-on Bluetooth pairing feature. That way, anytime you want to access the lock without touching it, the process is incredibly simple. Just whip out your phone, open the app, and tell your bike to unlock. Quite handy for people who are approaching their bike and want it unlocked and ready to go.

Remember those alerts from before? The ZiiLock is constructed with its own motion sensors, allowing it to make judgements with respect to whether or not it’s being stolen. If someone is tampering with it, the ZiiLock will send an SOS to you through the ZiiLock app. The alert will read “Unauthorized action detected!” and give you a timestamp indicating when it occurred. 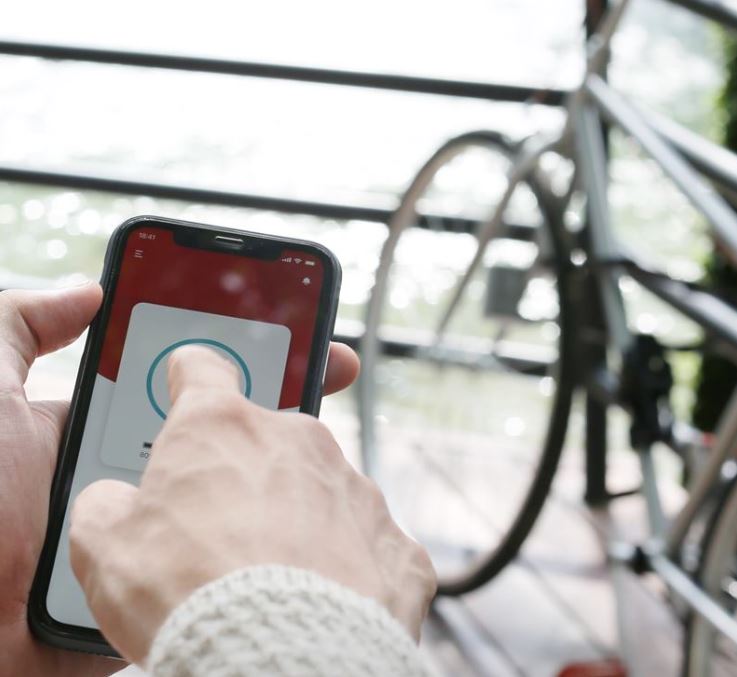 It would be cool if the lock had some kind of loud speaker system so it could blast noise at people who were tampering with it. But unfortunately, that isn’t the case. But another cool thing you can do from within the app – you can view the location of the ZiiLock’s last known location. That feature up on a Google Maps interface, making it approachable and intuitive. It’s a good way to remember where you ended up parking your bike. But it’s not actually a low-jack, it’s just a reminder of where you left it last.

If your bike was locked to a bike-rail, and someone came along and unbolted the bike-rail from the ground, stealing the rail and every bike on it? You could check the app, and it would tell you that your bike was parked where you’d left it, on the now-absent bike-rail. 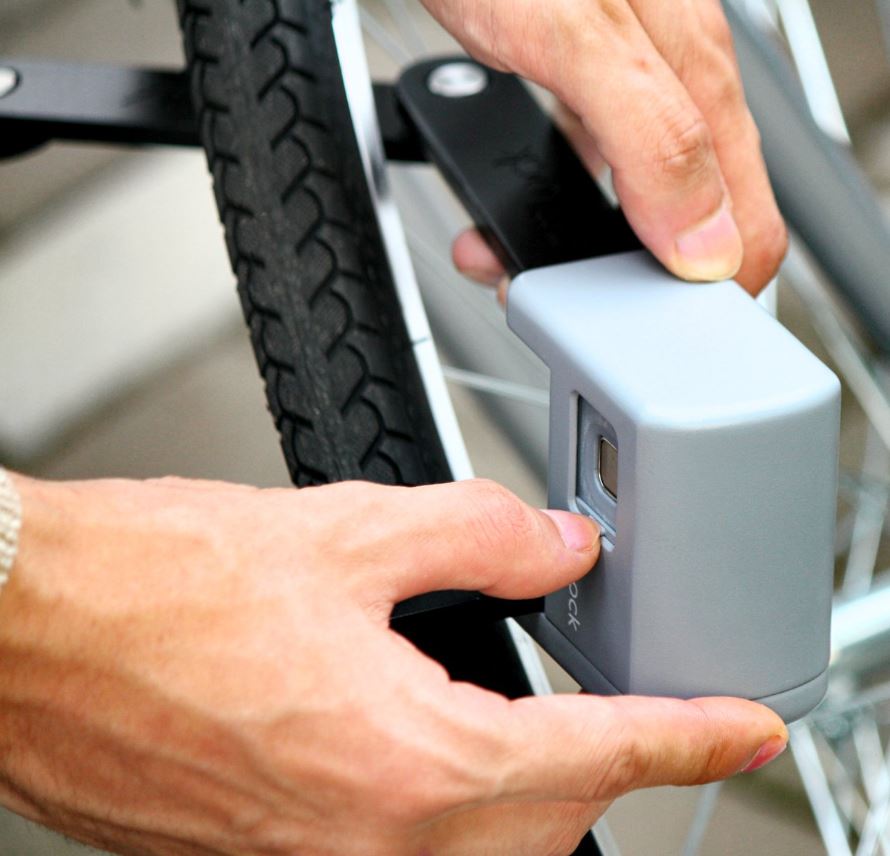 Ultimately, ZiiLock isn’t that much safer than a regular padlock. A determined thief will still be able to get their hands on your bike, if given the time and opportunity. So it’s not like you can start locking up your bike anywhere, with total disregard for its safety.

Still, it is a little bit better than a regular padlock. It gives you an alert if the lock is being messed with, and it allows you to hook-up to places that you otherwise might not have been able to lock against. Plus, the metallic construction is much more difficult to blast-through than a simple cable lock.

And ZiiLock does deliver when it comes to convenience. Having to carry a key can be problematic. Keys are easily lost or stolen, and then you’re in real trouble if you need your bike anytime soon. Fingerprint locks don’t always make sense, but for bike locks? They absolutely make a lot of sense. For people who are looking for convenience, and people who are interested in sharing access to their bike among authorized users, that makes ZiiLock a great choice.