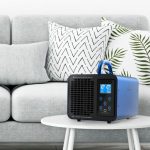 If you’re concerned about your indoor air quality, you’re not alone. Air purifier sales have been on the rise for years, spurred on by hermetically sealed, energy-efficient homes. But given the current global crisis, a lot of us are spending even more time cooped up indoors. Breathing low-quality, somewhat-contaminated air at home isn’t too terrible if you can go outside and take a walk. But what do you do when you’re stuck indoors? Moreover, what do you do if you’ve got a mold problem, or you’re trying to get rid of cigarette odor? In that case, you’ve got a couple of options. You could use a standard HEPA filter for some of these problems. But for the worst odors, mold problems, and airborne microorganisms, a HEPA filter won’t cut it. You need to get your hands on an ozone generator.

Today, we’ll be reviewing the Airthereal MA10K-PRODIGI Ozone Generator. This is a powerful ozone generator that’s designed to treat even a full-sized house. Of course, it can also be used for businesses, or even to treat the air in a single room. No matter what your needs are, it’s powerful enough for the task. But power isn’t everything. If you’re looking for a good ozone generator, you also need effective safety features, including a timer. And if you want a good home appliance of any description, you need durable construction. So how does the Airthereal MA10K-PRODIGI Ozone Generator stack up to the competition? Let’s take a closer look, and see what it has to offer! 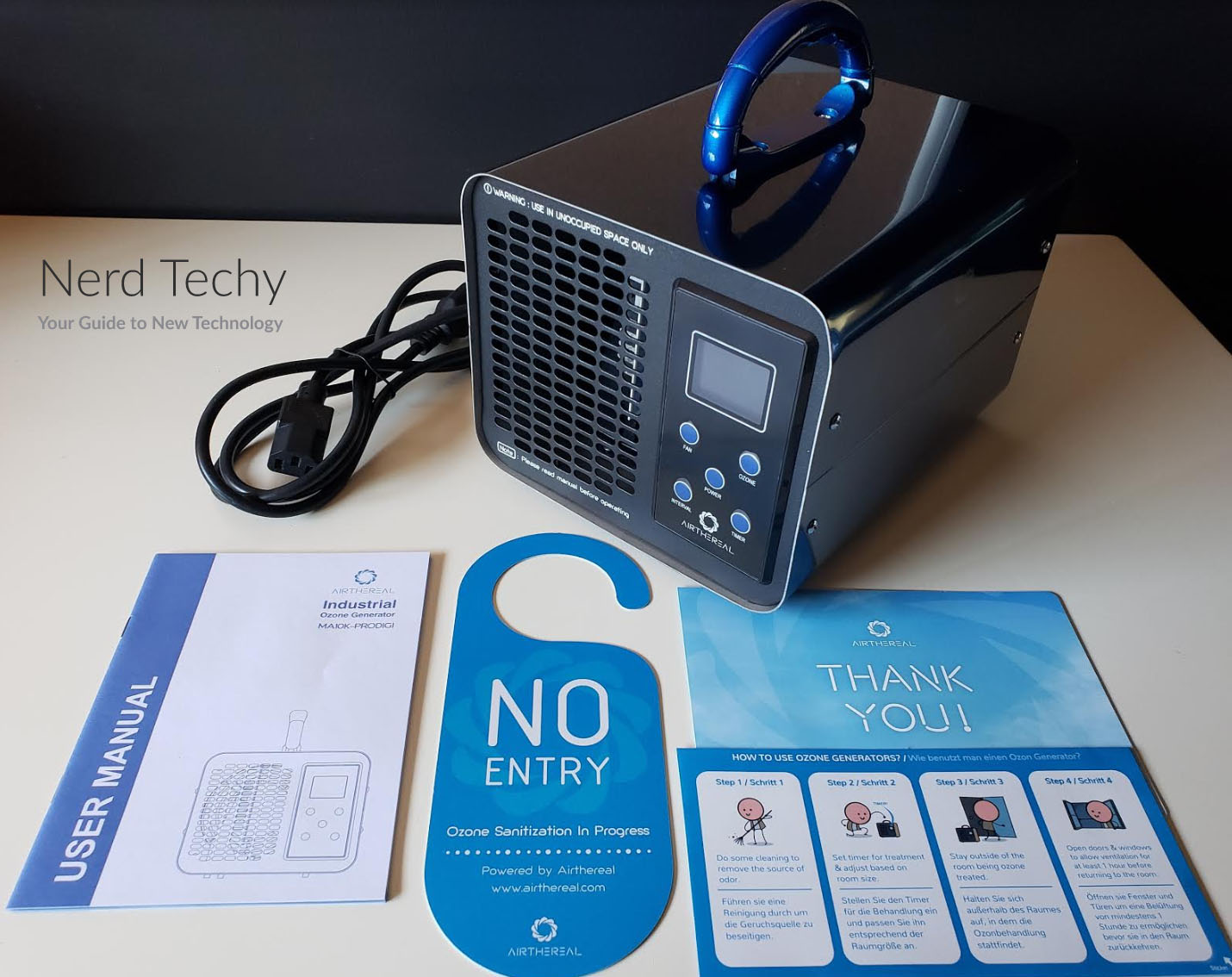 How Does an Ozone Generator Work?

Before we go any further, let’s talk about what an ozone generator is, and how it works. A standard HEPA filter is easy to understand. Air goes in, it flows through a filter, and anything larger than the holes in the filter gets removed. Pretty simple, right? An ozone generator, on the other hand, uses the magic of chemistry to clean your air. 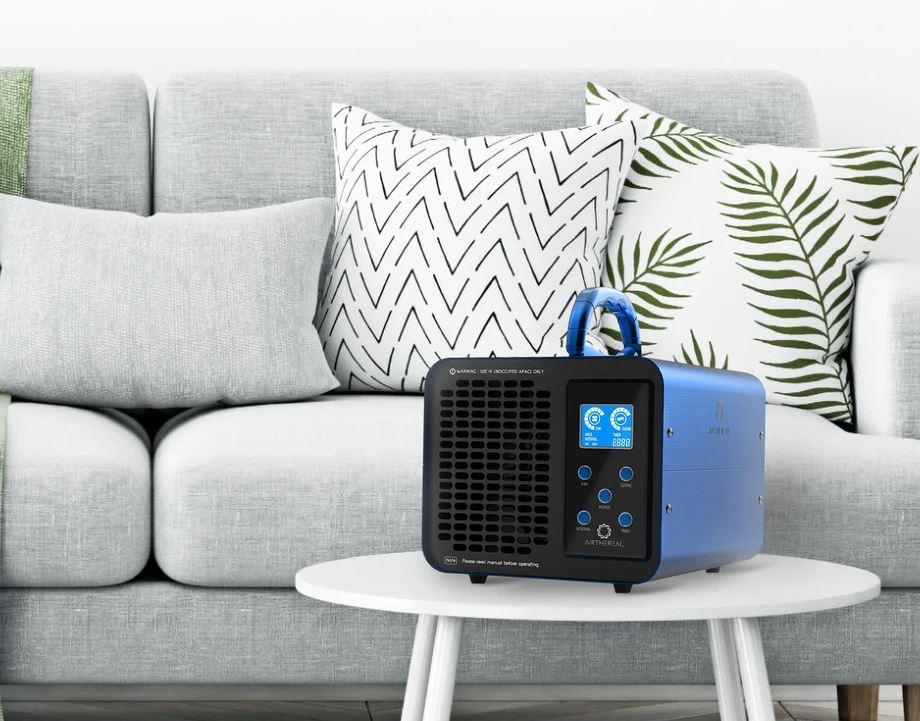 Ozone is actually made up of the same oxygen we breathe. However, it takes a slightly different form. Normal oxygen in the air is made up of two oxygen atoms bonded together, called O2. In an ozone molecule, there are three oxygen atoms bonded together, called O3. Ozone cannot be used by your body for energy, as O2 can. However, it has several other benefits. For example, the ozone layer in our atmosphere protects us from the most harmful types of radiation. Radiation hits an ozone molecule, and the extra bond absorbs the energy. This breaks the ozone molecule up into an O2 molecule and a free-floating oxygen atom. Eventually, the free-floating atom will find another free-floating atom and form another O2 molecule. Because ozone is naturally created by natural phenomenon, such as lightning, the ozone layer is continually replenished. Pretty cool, huh? 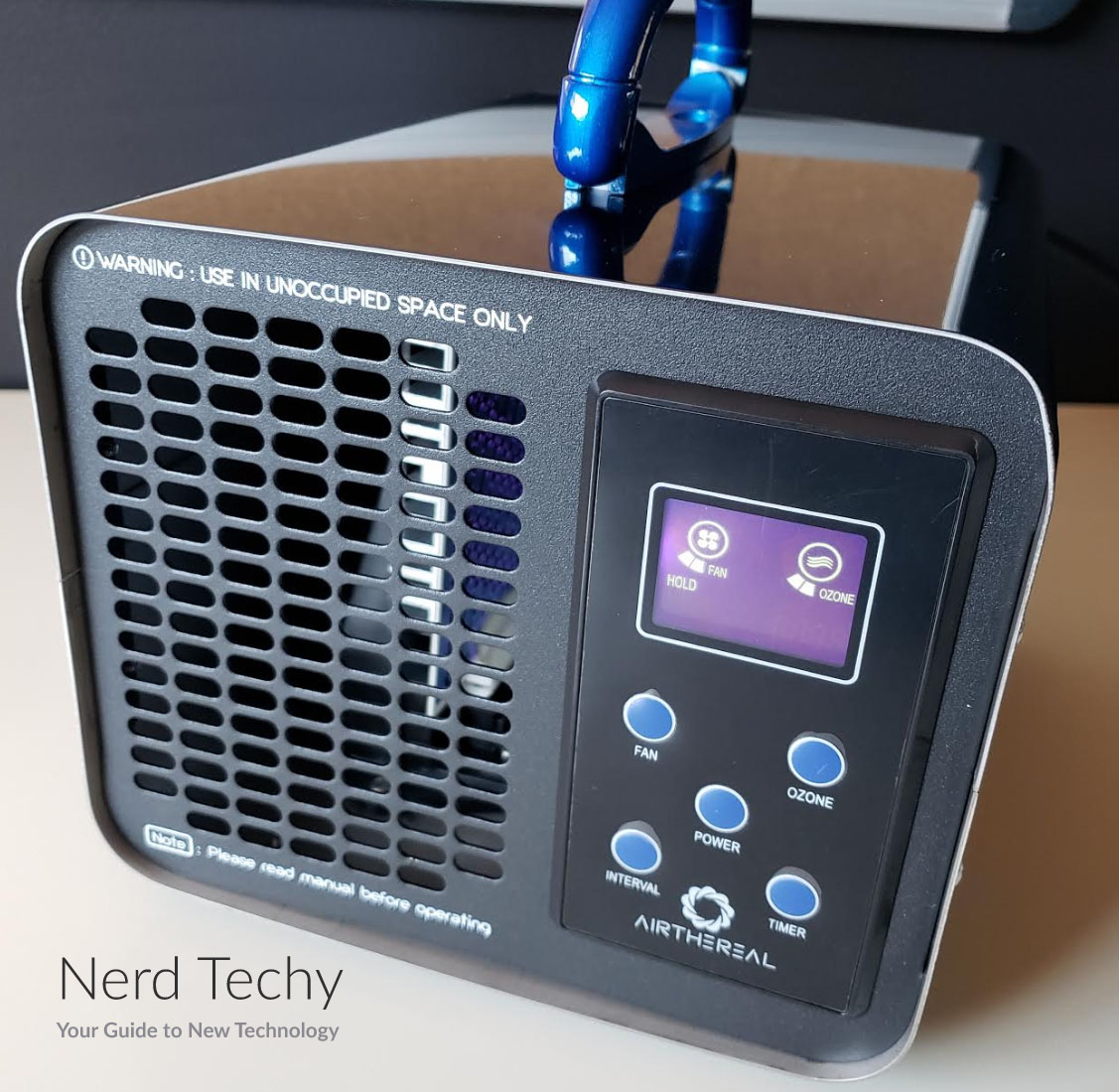 An ozone generator works in much the same way as natural processes. It uses electricity to break up O2 molecules and create ozone, then blows it into your room. When used properly, an ozone generator can provide many benefits for your home. It can kill mold, bacteria, mildew, and even viruses. It can even eliminate odors that a standard air filter can’t remove. That said, this requires a very high concentration of ozone. This brings with it a few concerns that we should talk about before we go further.

You see, ozone has a downside. When it exists way up in the atmosphere, it’s a good thing. It’s literally essential for life on Earth. But at ground level, in high concentrations, it can cause problems. It can make it difficult to breathe, inflame your airways, and even harm your lungs. For this reason, the EPA often issues alerts when ozone levels at ground level are high. For the same reason, ozone generators are illegal to ship to the state of California. 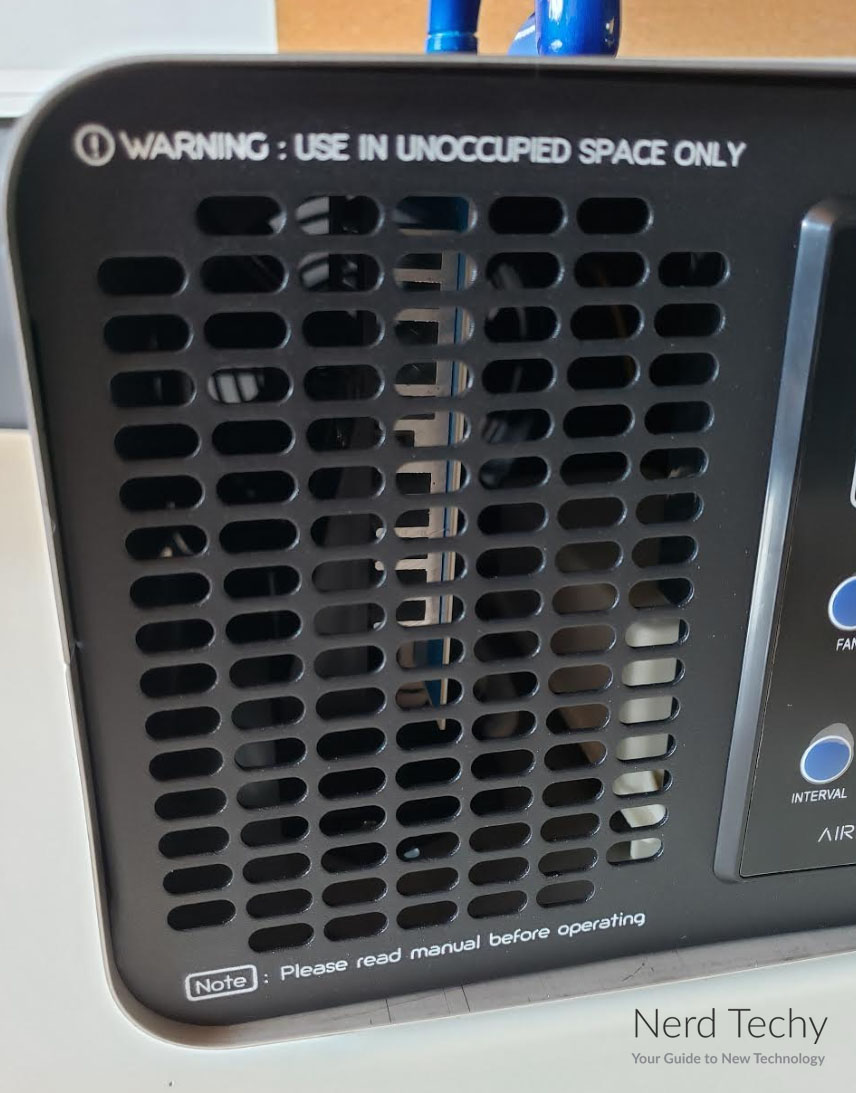 This doesn’t mean you should avoid using an ozone generator. But it does mean you need to be safe when you’re using one. In other words, avoid using the MA10K-PRODIGI in a room that’s currently occupied. Close the door if you’re treating a single room, or go for a long walk if you’re treating the entire house. Then ventilate the space for at least an hour before you start using it again. Don’t worry about contaminating your neighborhood. Remember how sunlight breaks up ozone in the upper atmosphere? It does the same thing at ground level. To use an analogy, a standard air filter is like a can of RAID. An ozone generator is like a full-on bug bomb. It gets the job done, but you need to use it safely.

Ozone generators will clean out a lot of contaminants from your air. But one thing they won’t do is remove basic particulates, such as dust or pollen. To do that, you need a traditional HEPA filter. If that’s what you need, consider the Airthereal Glory Days AGH550 Air Purifier. It will remove particulate matter, but not the other contaminants that the MA10K-PRODIGI removes. Now, let’s get on with the review! 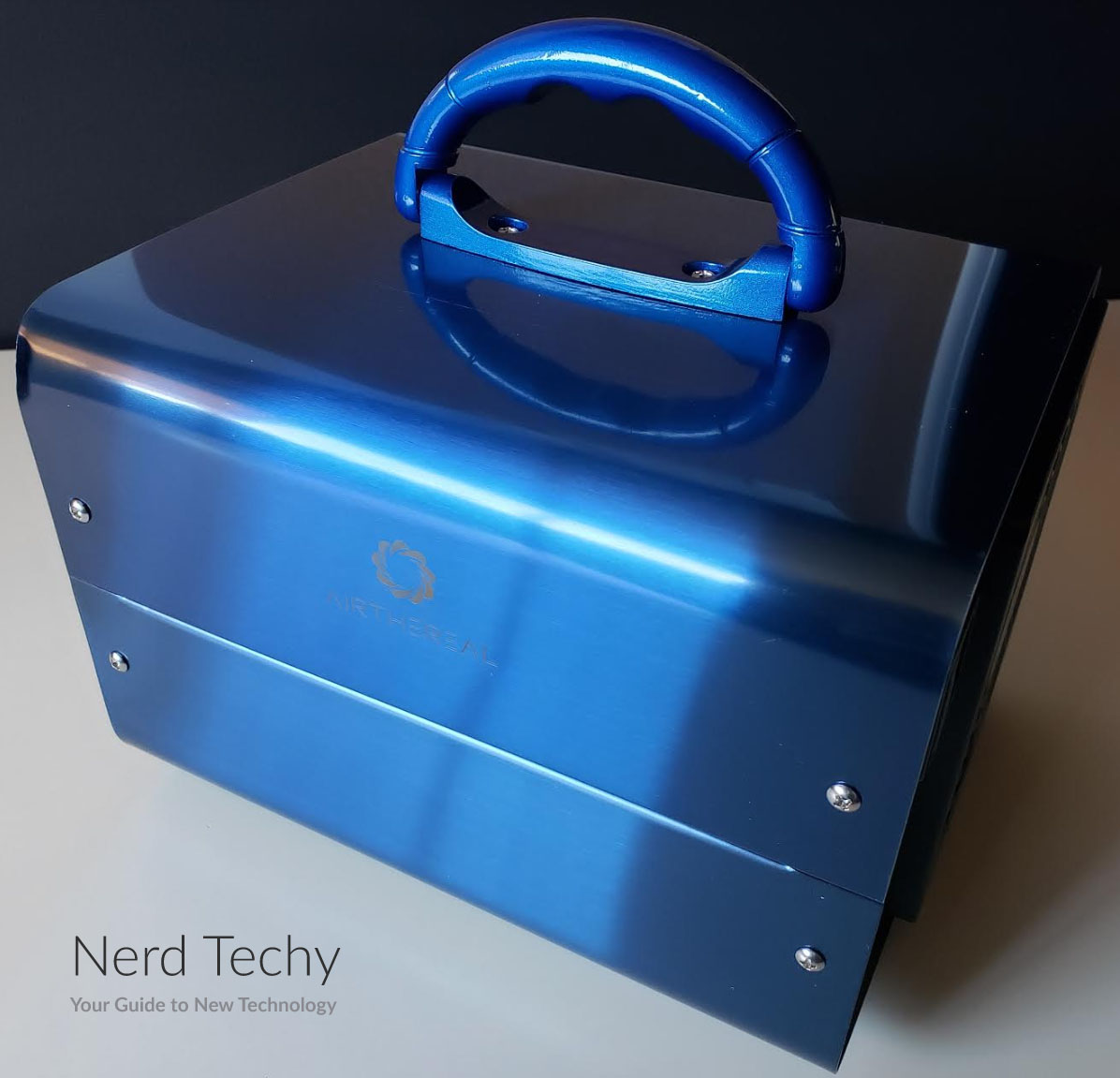 The Airthereal MA10K-PRODIGI Ozone Generator is a solid, sturdy unit. It’s constructed from 304-grade stainless steel, which is both easy to clean and corrosion-resistant. It has an attractive, electric blue finish, with black steel grills on the front and back. It measures 9.3 inches long, 7.1 inches wide, and 6.8 inches high, and weighs 6.6 pounds. This makes it relatively beefy for the size, but it’s easy to carry. There’s a collapsible handle on top that can be used to move it from room to room.

On the front of the MA10K-PRODIGI, you’ll see a control panel for operating all of the machine’s functions. At the top, there’s an easy-to-read LCD display. This gives you a visual readout of all the MA10K-PRODIGI’s essential functions. There’s a fan speed indicator, which is self explanatory. There’s an ozone level meter, which tracks the relative concentration of ozone in the air. There’s also a countdown timer, and a 12 or 24-hour interval display. We’ll explain more about these in the next section. Beneath the LCD display, there are 5 buttons. These control the fan, the ozone generator, the unit power, and the timer functions. Because you can control the fan independently from the ozone generation, you can use the MA10K-PRODIGI for ventilation. This makes it easy to blow air out a window when you’re done treating the room. 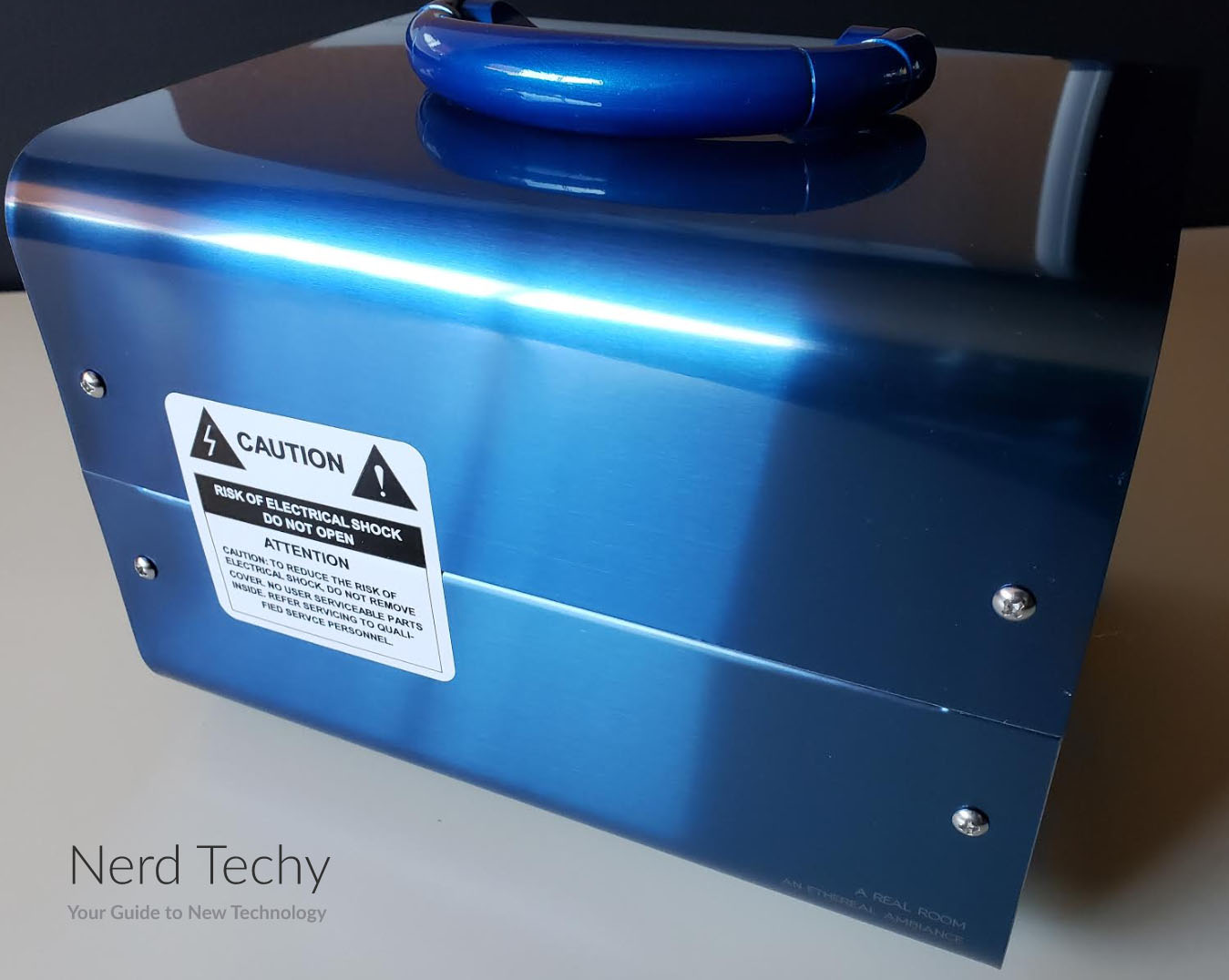 There are two versions of the MA10K-PRODIGI available. One is designed for 110-volt North American power, and the other is designed for 220-volt EU power. Make sure you select the correct option for your region when you place your order. The package also includes a couple of extras that are worth mentioning. The first is a spare fuse. This lets you easily repair the machine in the event that it’s damaged by a power surge. If you need more fuses, they’re a standard design that’s readily available at most hardware stores. You also get a “No Entry” door tag. If you’re using the MA10K-PRODIGI in your own home, you shouldn’t need this. But if you’re removing odors in a public space – a hotel room, for example – it’s a nice extra bonus. 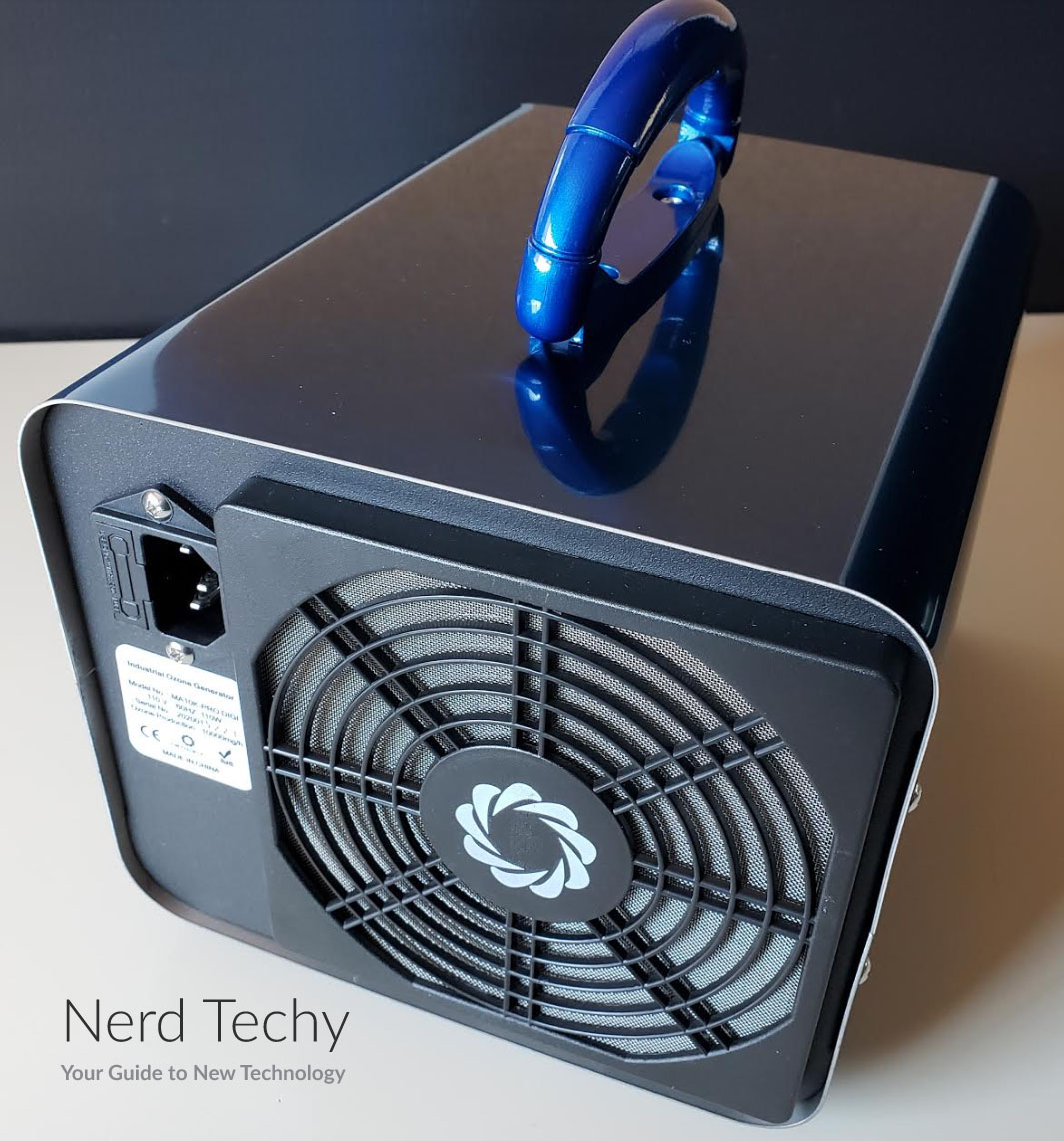 So, how do you actually use the Airthereal MA10K-PRODIGI? There are two different modes. The first mode is the basic timer mode. You select a time interval of up to 12 hours, and set the machine to start. It will give you 5 minutes to clear the room before it actually starts producing ozone. When the timer runs out, it will automatically shut off. This is a great way to clear the air for a one-time project. 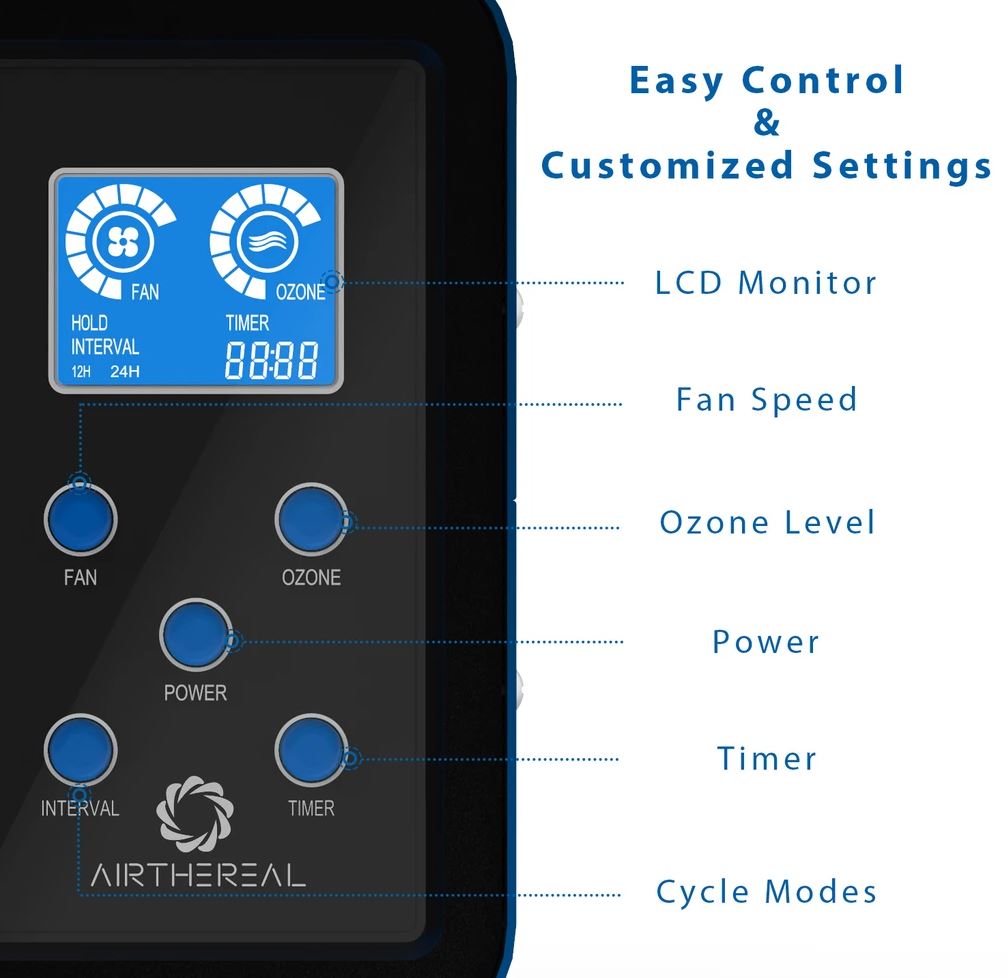 But what if you’re dealing with a persistent odor, or want daily treatments, there’s also another option. You can use the interval mode to set the ozone generator to run every 12 or 24 hours. This is probably the weakest aspect of the MA10K-PRODIGI. When used in interval mode, it will only run for half an hour. So if you wanted it to run all night, every night, you’re out of luck. You also can’t select a particular time. So if you want the MA10K-PRODIGI to run every day at 6 PM, you have to set the timer at 6 PM. In a machine that’s otherwise well-designed, this is disappointing. 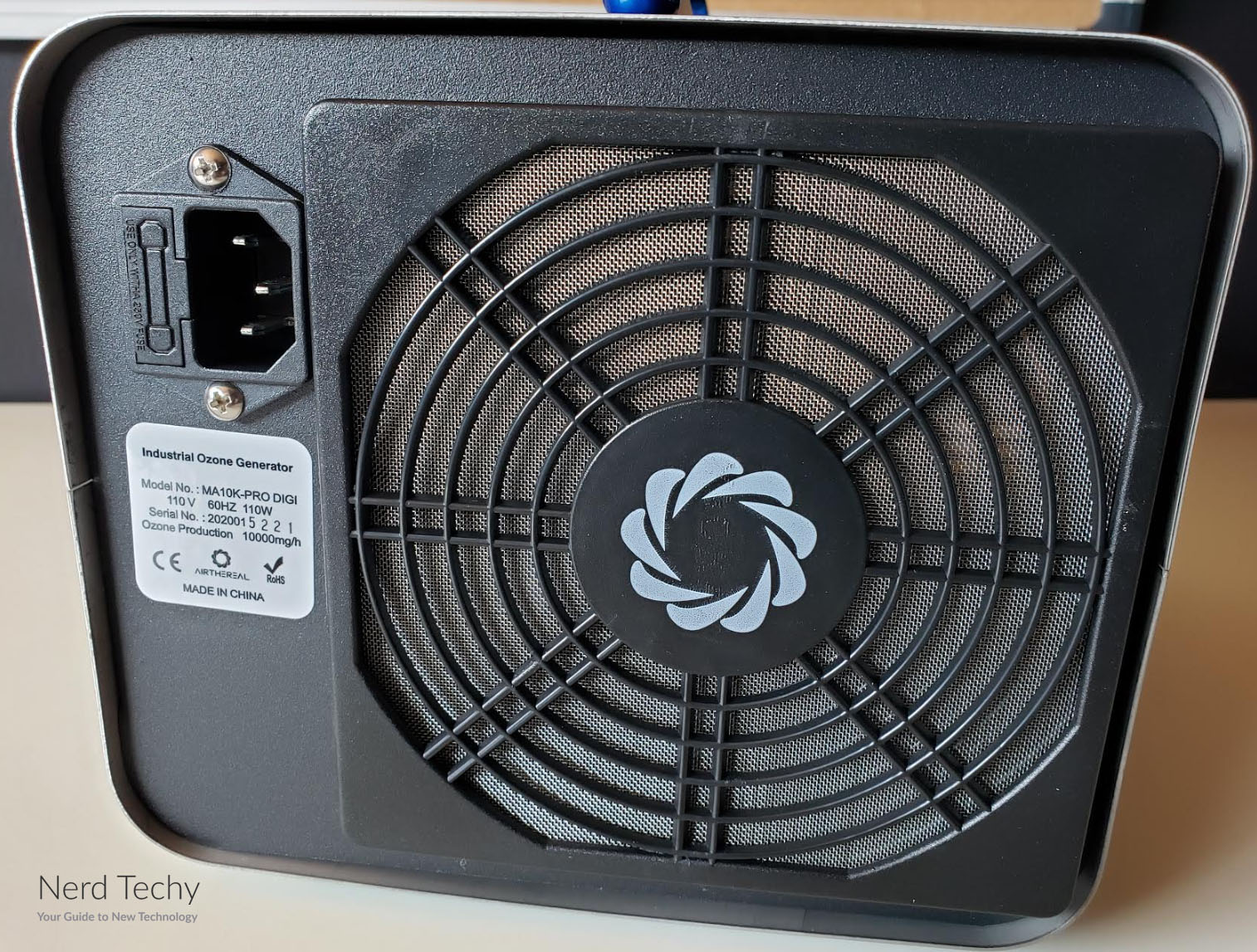 The Airthereal MA10K-PRODIGI has a maximum output of 10,000mg of ozone per hour. In terms of coverage, this works out to about 2,000 square feet. If you’ve got bad odors in an average suburban home, you’ll be more than covered. Maintenance is also easy. Unlike a HEPA filter, which requires regular filter changes, you don’t have any parts that need regular replacement. Instead, there’s just a simple pre-filter in the back of the unit. When it gets clogged with dust, remove it and rinse it out. Afterwards, make sure that it’s dry before you replace it. Under most circumstances, this should only take about an hour. 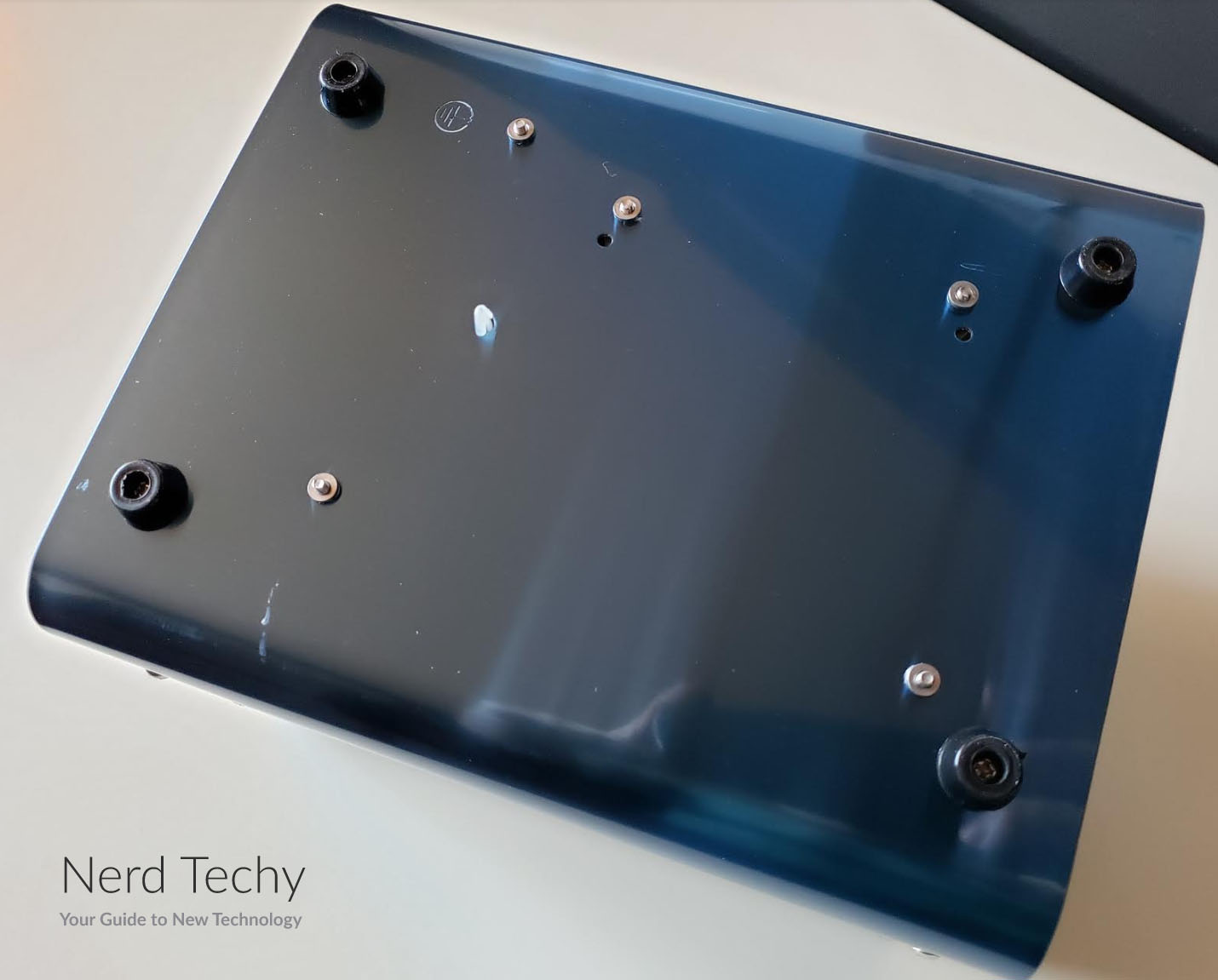 So, is the Airthereal MA10K-PRODIGI Ozone Generator worth your money? It depends on what you need. Let’s start with the obvious: if you need particulate filtration, just buy a HEPA filter. But if you need to kill mold, mildew, bacteria, or viruses, it’s an excellent choice. It’s also a fantastic choice for removing odors. This isn’t just limited to residential purposes, either. Suppose you run a motel, and a customer spent the whole night chain-smoking in their room? Run the MA10K-PRODIGI for a few hours, and the room will be ready to rent to another customer.

Operation is relatively easy and painless. The 5-minute delay is a much-appreciated feature, since it helps you stay out of the room while the unit’s running. The 12 and 24-hour function is a little bit disappointing, but can still be useful under the right circumstances. All in all, you’re looking at a heavy-duty, well-engineered piece of equipment.