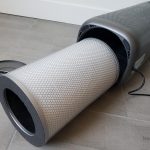 Over the past few decades, Americans have become keenly aware of our indoor air quality. Part of this is due to the fact that air filtration has been getting more affordable over time. But a more significant factor is the way we built our homes with an eye toward energy efficiency. Our walls have thicker insulation. Our windows are double-paned and sealed. Our entire homes are wrapped with Tyvek. Even our doors are better sealed, with weather stripping on all four sides. All of this has been great for our power bills and the environment.

Unfortunately, it means that contaminants stay inside our homes instead of getting exchanged by fresh air. Even a small amount of mold, for example, will produce spores that linger in the air for months. Dust mites, pollen, and so on will similarly get stuck in your home. All of these contaminants can cause allergies, asthma, and other breathing problems.

We’re about to review the Airthereal Glory Days AGH550 Air Purifier. This is a HEPA filter that’s designed to remove a variety of contaminants from your home’s air. We’ll look at the quality of the design, and how it’s operated. We’ll also look at how the air filter works, and what kind of contaminants it can remove. Let’s get going! 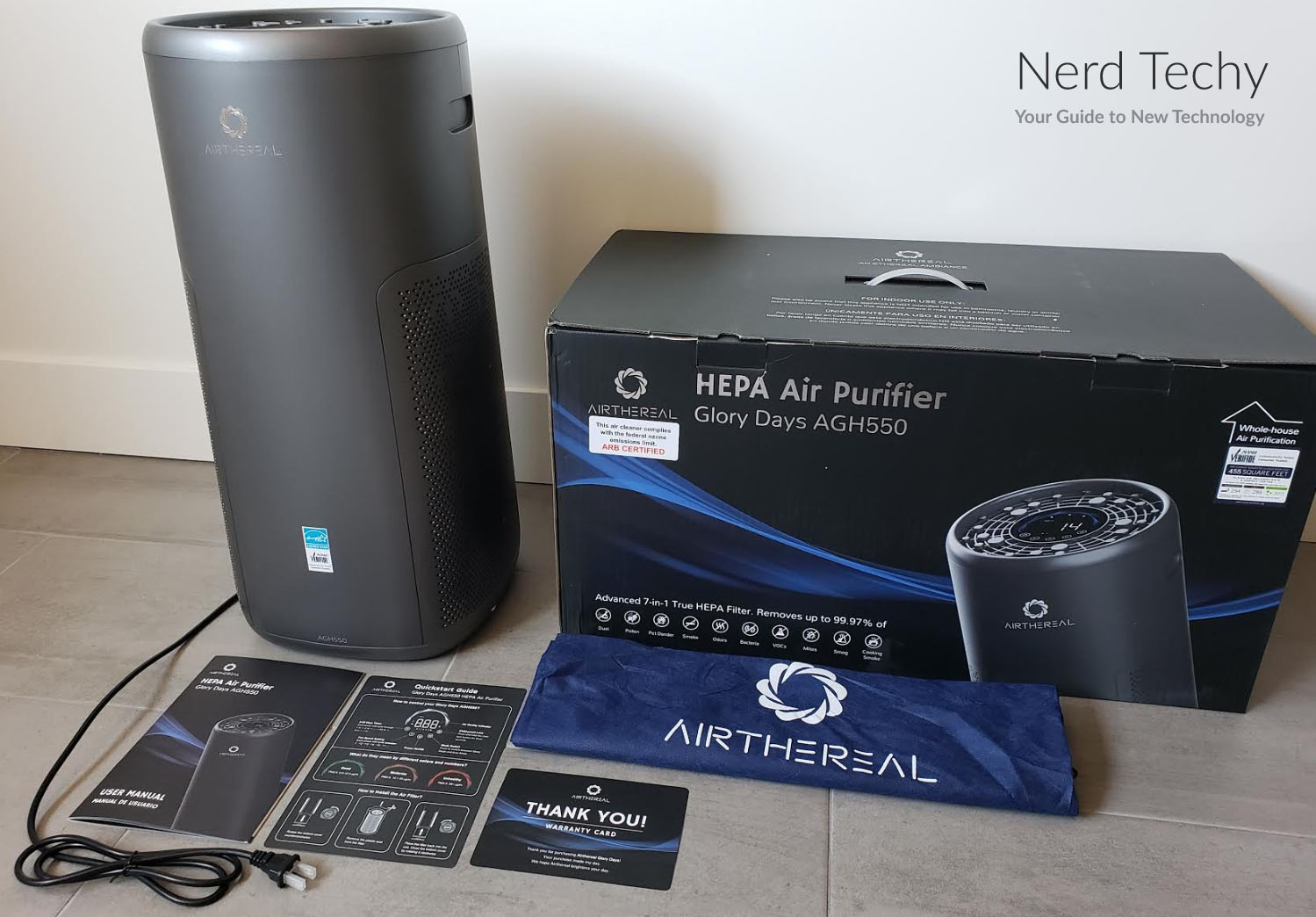 The Airthereal Glory Days AGH550 is a mid-sized air filter that stands 24.6 inches high and measures 11.4 inches across. It’s square at the base, and tapers to a rounded top. The body is constructed from a matte black ABS plastic, with intake vents on the sides for air flow. There are slots near the top on each side just above the vents, which make the Glory Days easy to carry. At 14.7 pounds, it’s about the weight you’d expect for the size. There’s a silver Airthereal logo on the front, but otherwise it’s a fairly understated design. 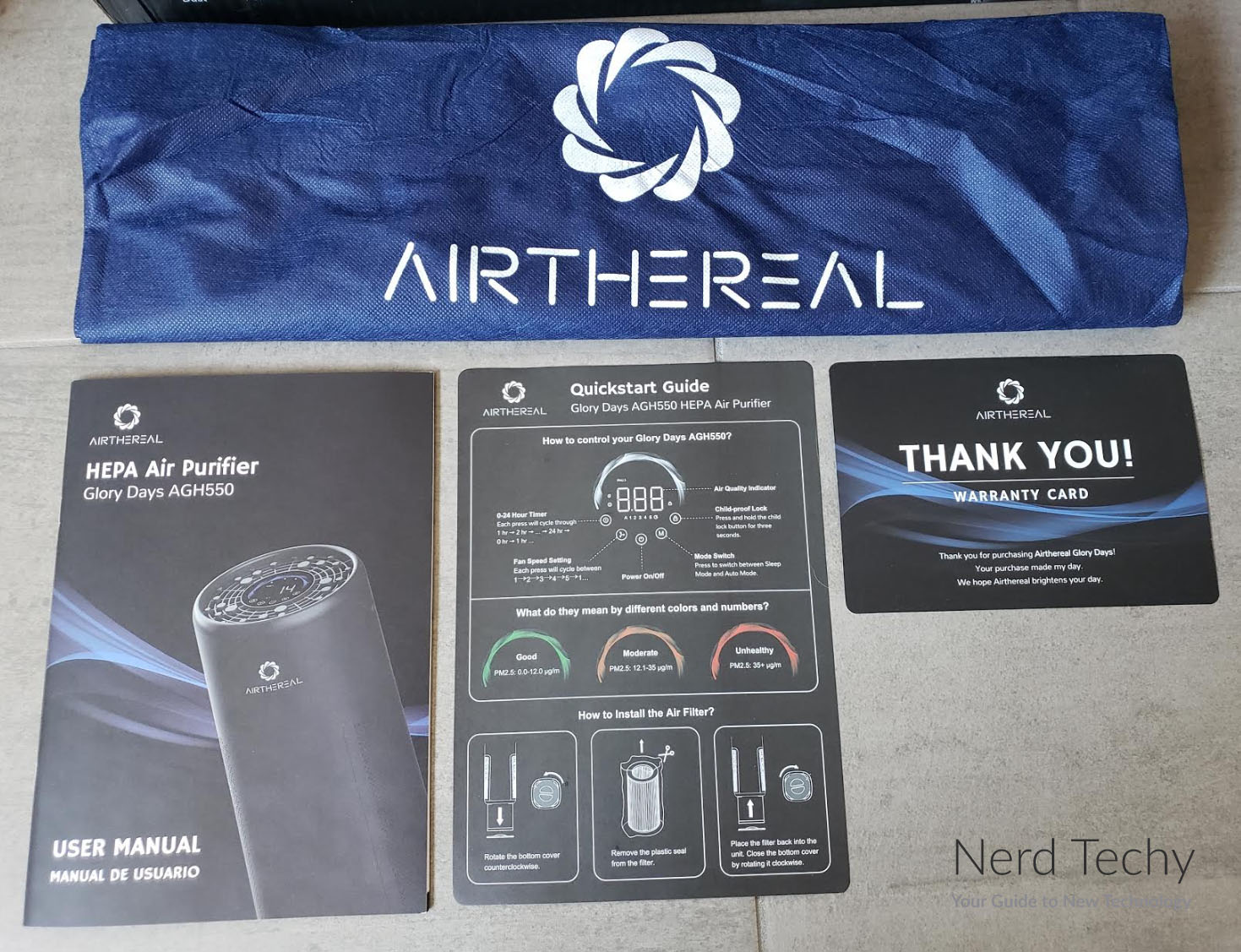 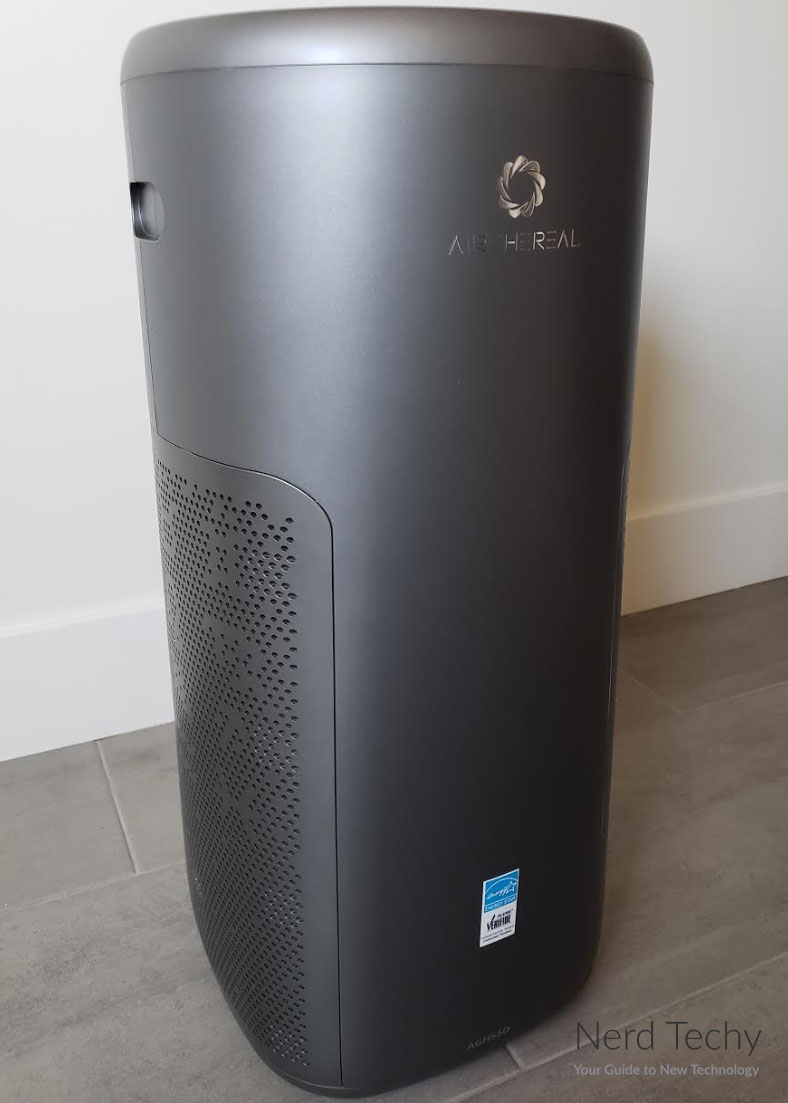 Across the bottom of the display, there is a series of five buttons, once again arranged in a semicircle. The buttons have a soft touch, which makes them easy and comfortable to operate. While there’s no tactile feedback, you’ll hear a soft beep every time you touch one. From left to right, the first button simply powers the filter on and off. The second button controls the speed of the fan. The third button allows you to switch between auto mode, always on, and the timer mode. Next, the fourth button lets you set the time on the 24-hour timer. Last but not least, the final button turns the child lock on or off. 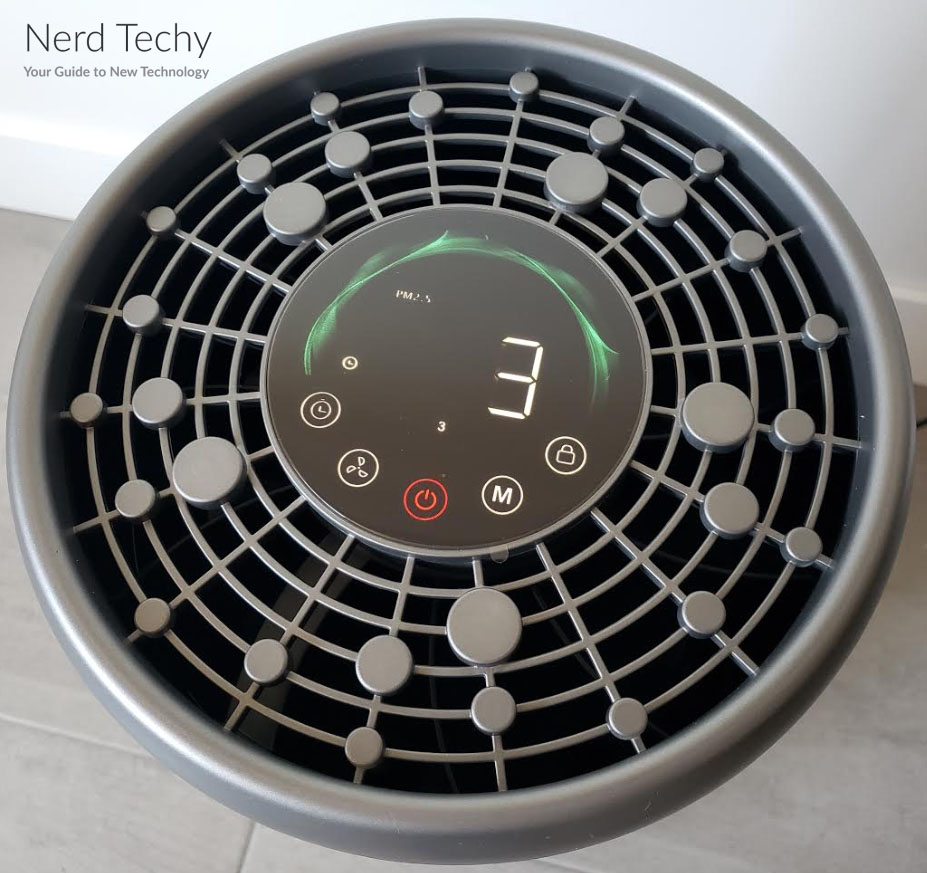 As we already mentioned, the Glory Days can work in three different modes. The one they advertise most prominently is the timer mode, which can be set for 1 to 24 hours. However, the other 2 modes are equally useful. There’s an always on mode, which means you simply turn it on or off manually. There’s also an automatic mode. The automatic mode makes use of an air quality sensor to operate the filter as needed. It will turn off when air quality is good, and turn back on when the particle count starts to rise.

In addition to changing the filtration mode, you can also adjust the fan speed. There are five different speed levels, which is more than you’ll see on the majority of home air filters. Keep in mind that the higher the fan speed, the more square footage you’re going to be able to cover. Conversely, lower speeds will cycle less air per hour, meaning less space can be covered. That said, lower speeds also produce less noise. The highest setting sounds like a box fan, which might get annoying in a quiet environment. On the other hand, the lowest “sleep” setting produces only 25 decibels of sound. This is literally quieter than a whisper, so you can use it in your bedroom without any issues. That said, the automatic mode will also adjust the fan speed on its own. To use the filter in sleep mode, you’ll want to use the always on or timer mode to keep the volume down. 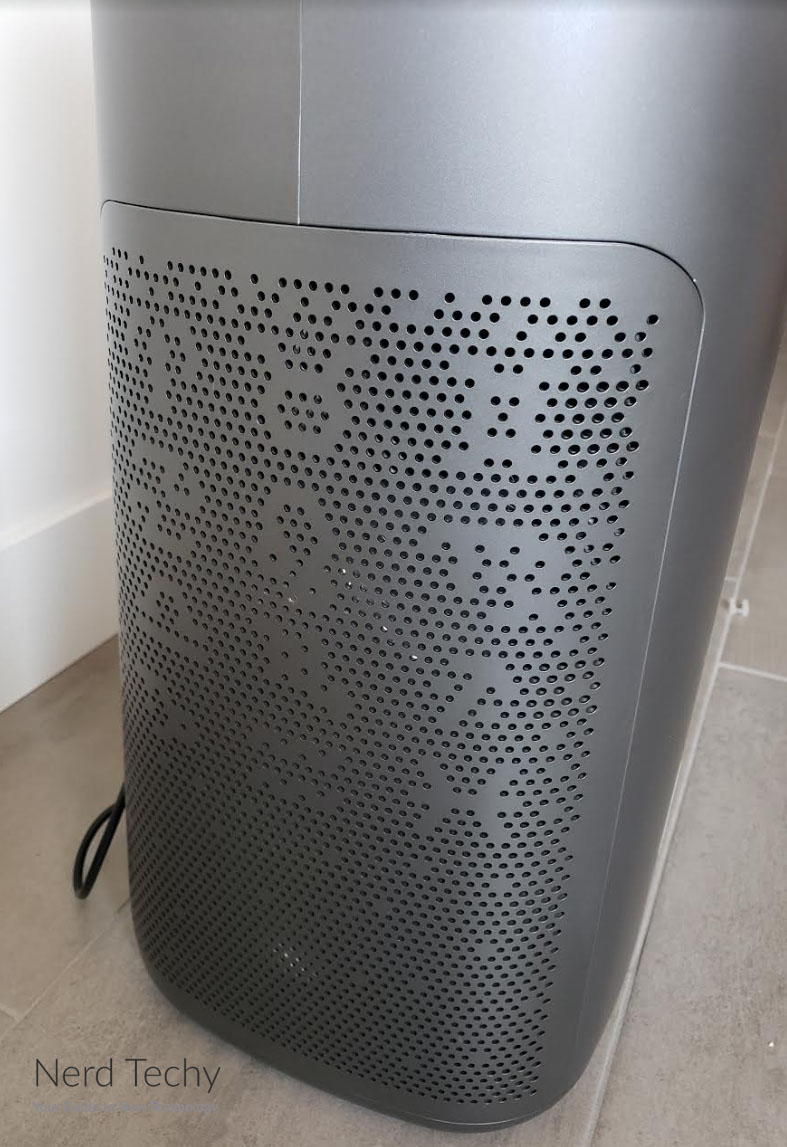 The total power draw of the Glory Days is only 40 watts at maximum power. This is only as much as a small incandescent lightbulb, or a handful of LED bulbs. Assuming you run your filter constantly, you’re looking at only 960 watt-hours per day, or slightly less than a kWh. At average US energy prices, this works out to only 12 cents a day. And you’re probably not going to run your filter 24 hours a day, so your costs should be even lower.

The Glory Days uses a three-stage filtration system to filter out larger particles before smaller ones. The outer layer is a simple aluminum mesh filter. This is designed to remove large particles like animal hair and larger pieces of dust. As a result, the mesh filter will prevent the inner filters from getting prematurely clogged. 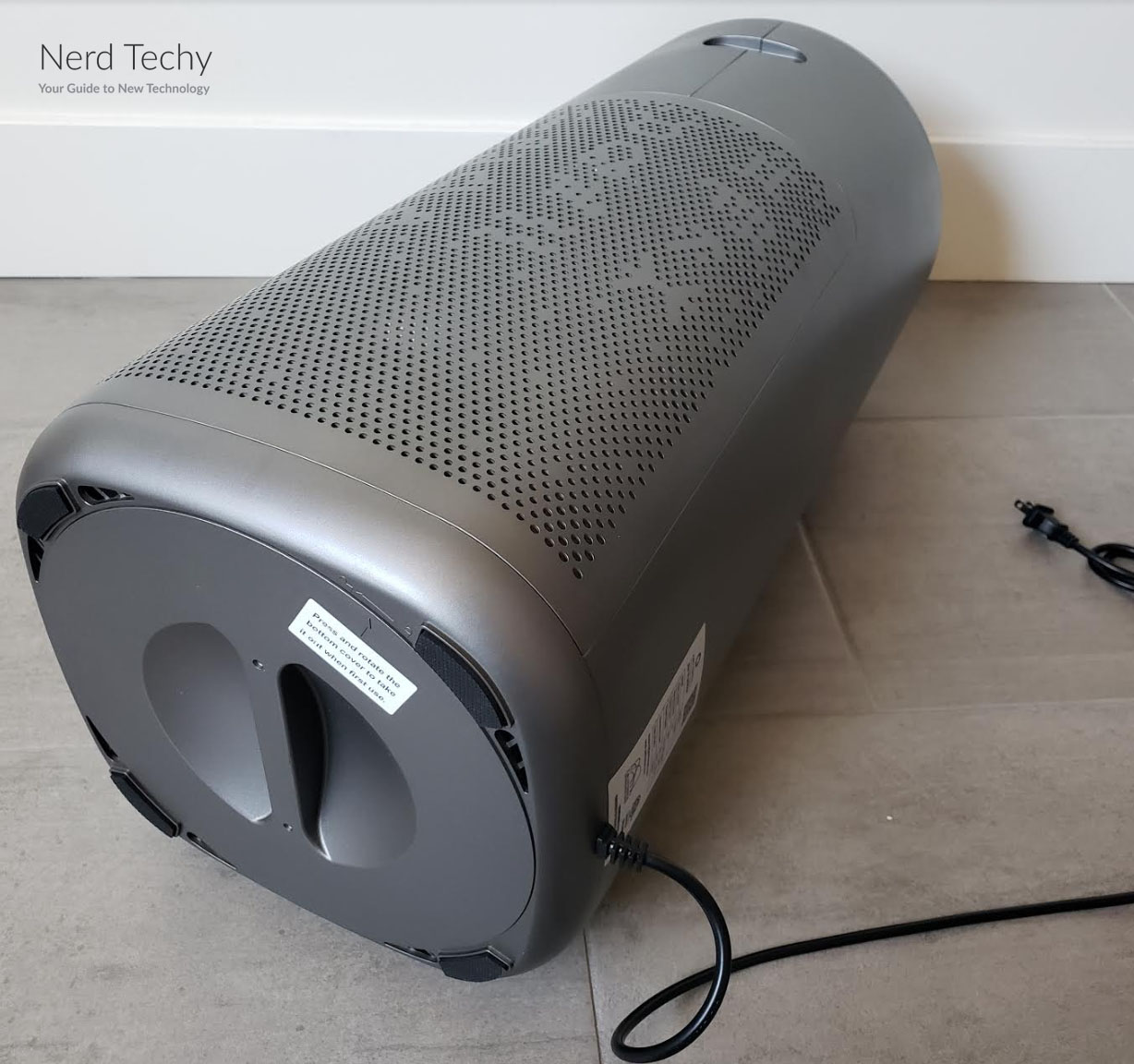 The next layer is a true HEPA filter, which has a ribbed design that should be familiar to most filter users. It’s rated to remove 99.97 percent of particles, which is right in line with HEPA’s standards. When this filter gets dirty, it needs to be entirely replaced. The exact lifespan of the filter is going to depend on how dirty your air is and how often you’re using it. If lifespan is your top criteria, consider the Okaysou AirMax 8L. Its filters last for over six months, but they’re tough to change when you need to.

The inner layer is actually built into the HEPA filter, but it bears mentioning because it’s important. It’s constructed from activated charcoal, which doesn’t actually remove any particulates. Instead, it removes chemicals, odors, and other airborne contaminants. 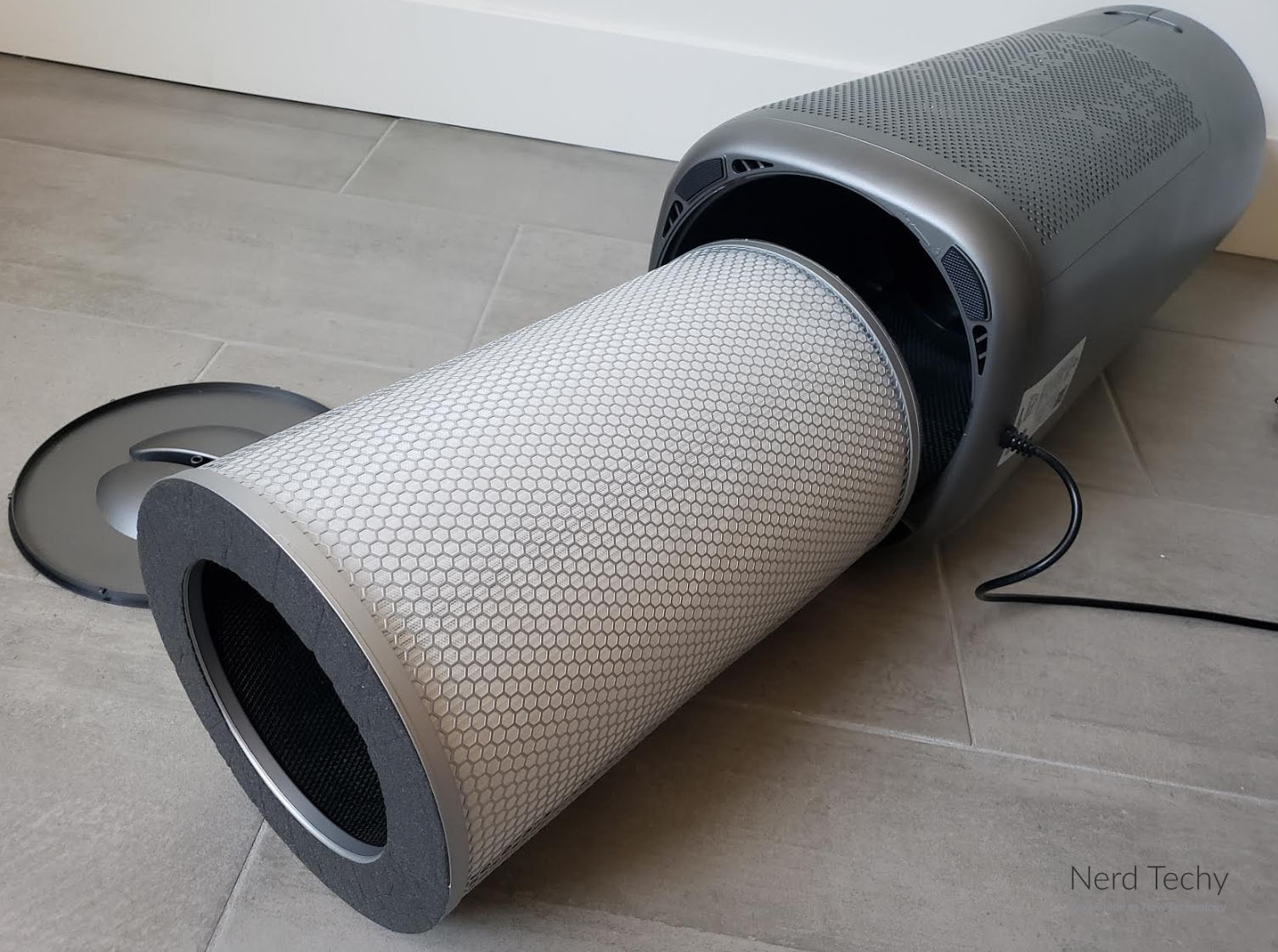 The Glory Days filter’s air quality sensor is unique and innovative, and is worth talking about. Most air quality sensors use infrared technology. These can take a quick, general “snapshot” of air quality. However, they can’t actually count particles or register their size. As a result, they can sometimes deliver inaccurate quality readings. Instead, the Glory Days uses a laser sensor. This allows for an accurate count of airborne particles, as well as their size. This provides pinpoint accurate readings, much better than you’ll get from most other air filters. 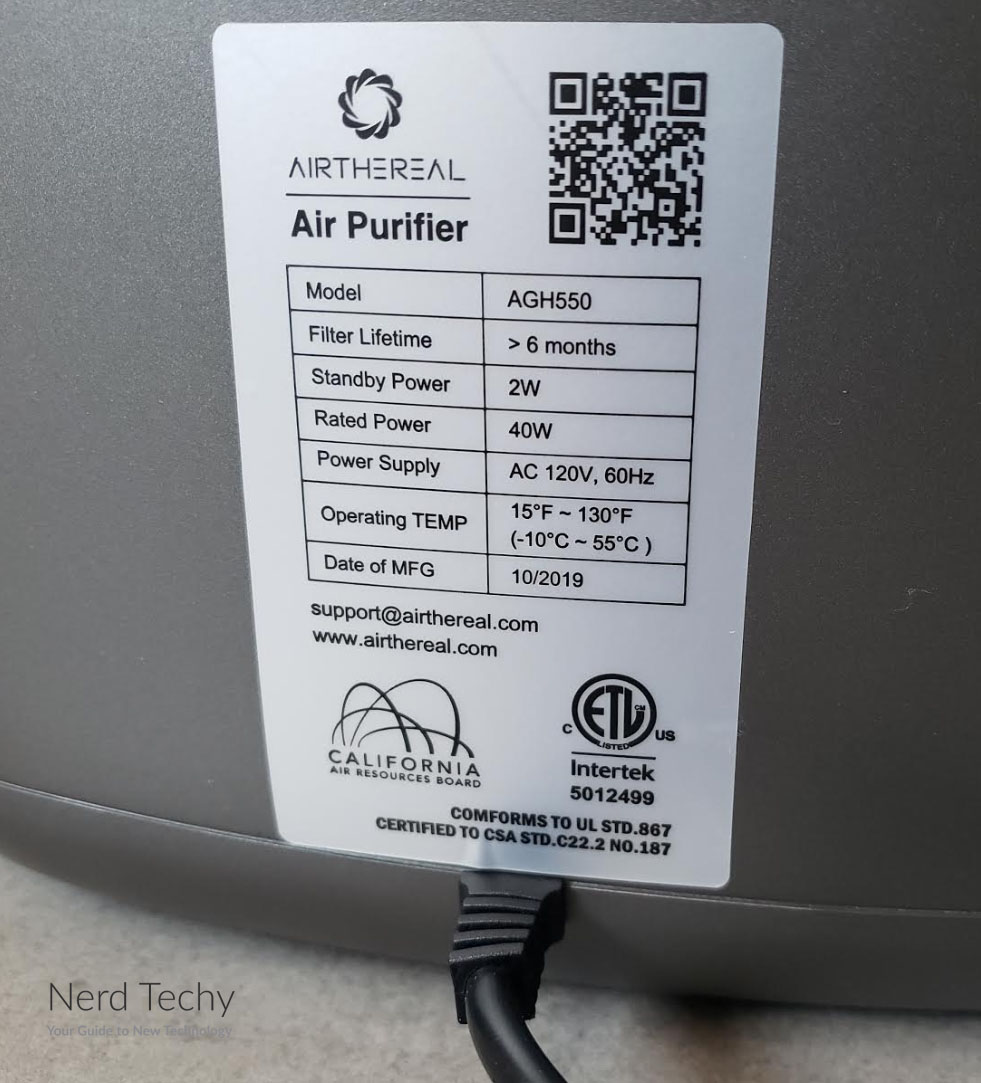 What Does the Airthereal Glory Days AGH550 Air Purifier Remove?

So, what will the Airthereal Glory Days actually remove from your air? Let’s look at each stage individually. The first stage, the mesh filter, is simply designed to remove large particles like dust and hair. These are unlikely to remain airborne for long, regardless, and you’d generally vacuum them up. However, it’s important to keep them out to ensure that your filter can operate efficiently. 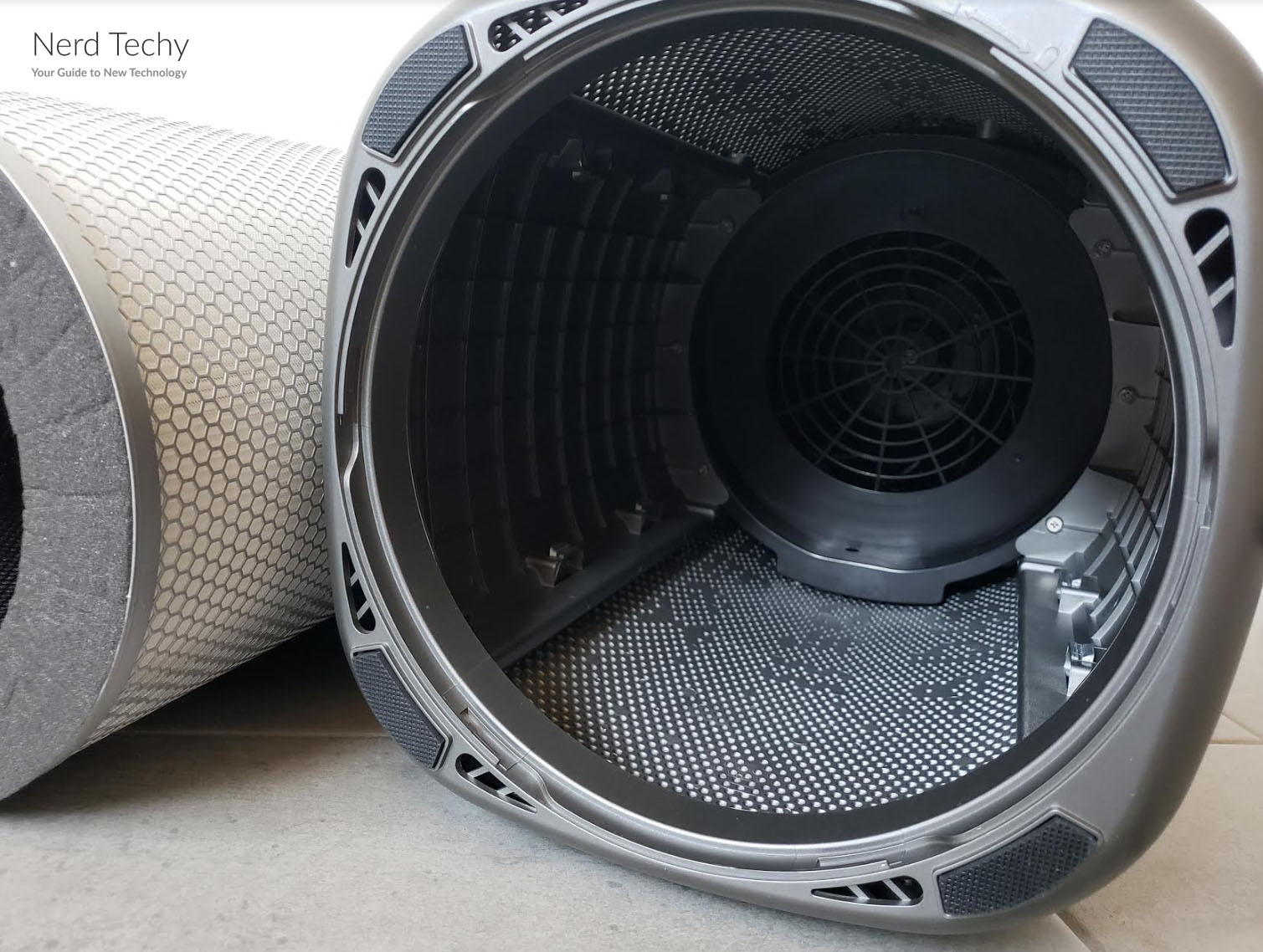 The next stage, the true HEPA filter, does the bulk of the work. This technology was originally developed by the US Army to protect sensitive equipment. It removes 99.97 percent of airborne particles, all the way down to 0.1 microns. This includes dust mites, mold spores, pollen, and even some airborne viruses. It also removes most particulates from tobacco or cooking smoke. Most allergens are going to be filtered out at this stage. 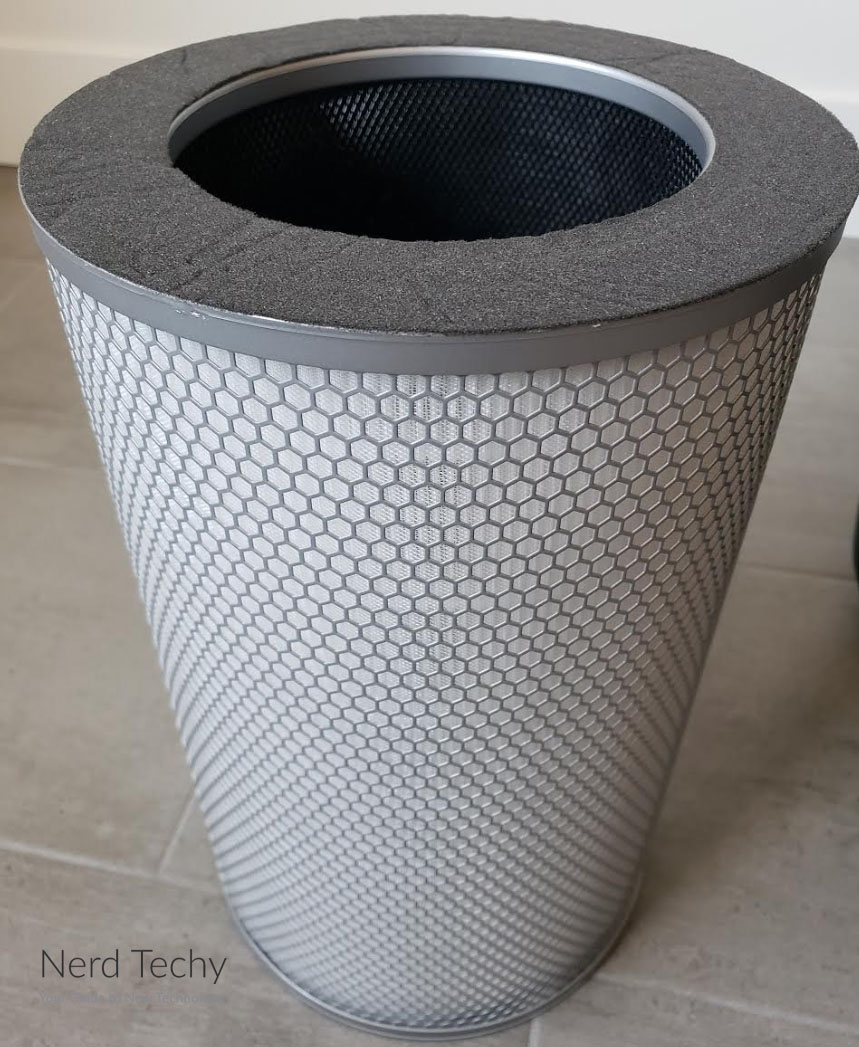 The activated charcoal filter should not be ignored. It also removes many sources of irritation. For one thing, it eliminates odors from pets, cooking, and tobacco. It will also eliminate many harmful contaminants that come from chemicals and upholstery. For example, most upholstery outgasses formaldehyde for several years after purchase. This will be absorbed by the activated charcoal layer.

If you need even more powerful filtration, read our review of the Levoit Vital 100. It has an exceptionally powerful filter that removes 99.975 percent of particles. However, it’s only rated for 300 to 500 square feet.

The Glory Days filter is rated to circulate 324 cubic feet per minute. Assuming standard 8-foot ceilings, this means it can treat 750 square feet of space. This is excellent performance for a mid-sized filter. You could easily treat an entire mid-sized apartment with a single Glory Days unit. 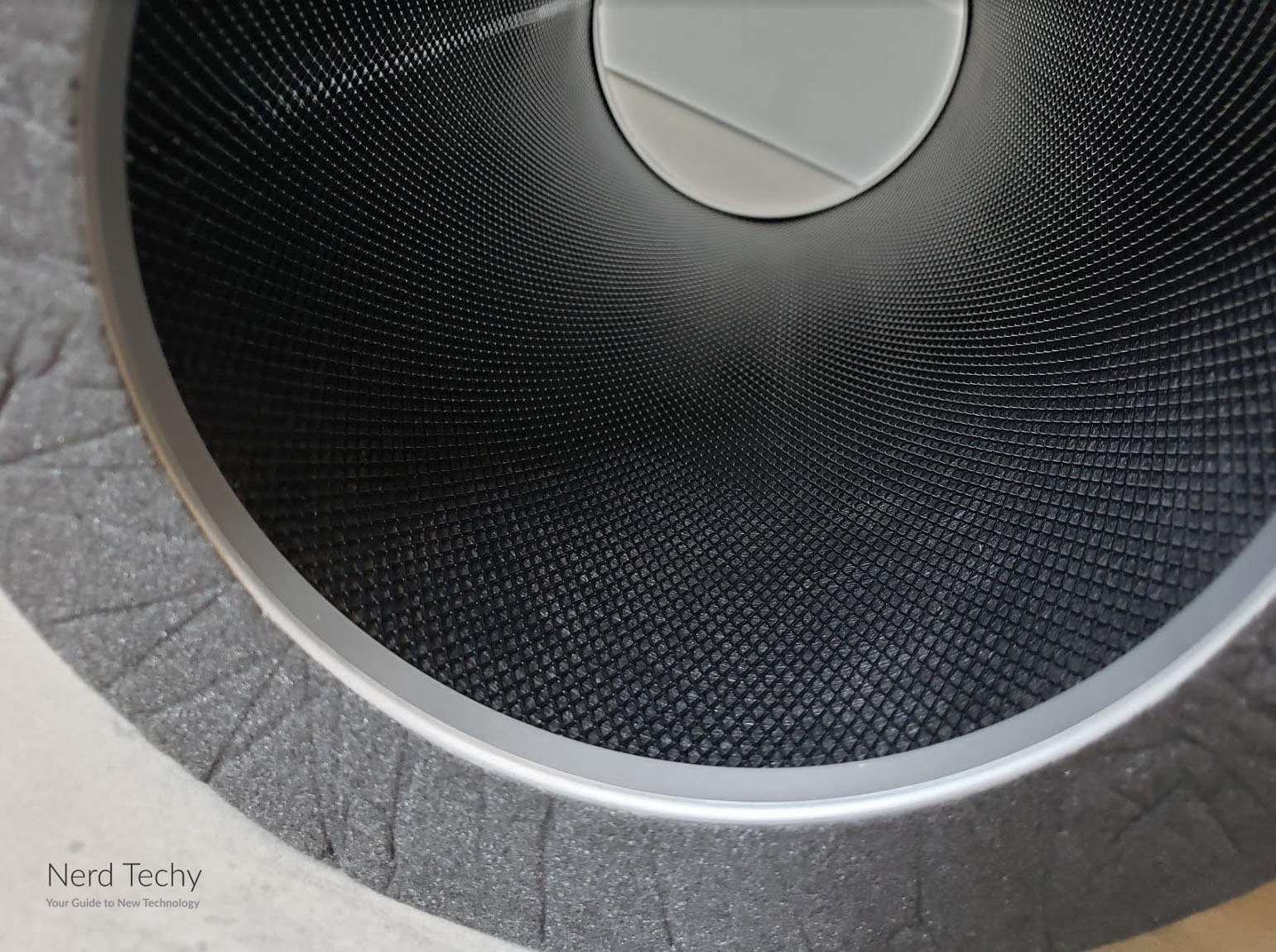 If you’d rather spend less to treat a smaller area like a bedroom, there are smaller filters available. For example, the Elechomes EPI-236 is an affordable filter that’s rated for 280 square feet. However, it’s a bit louder than the Glory Days filter. 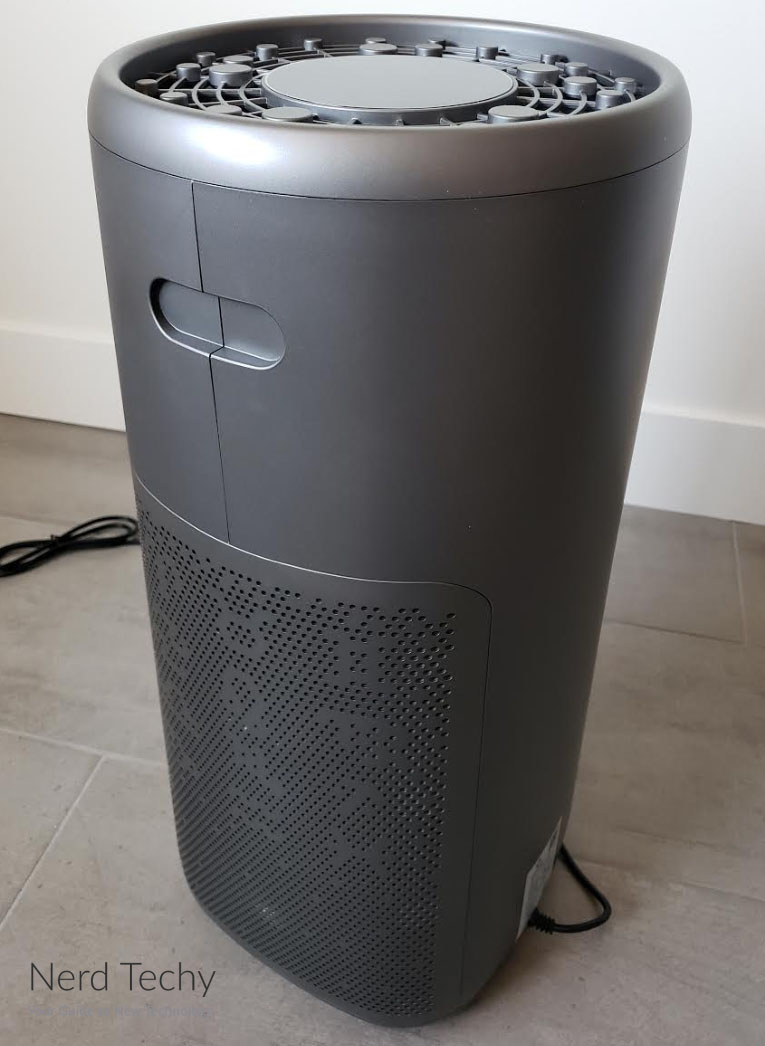 In the final analysis, the Airthereal Glory Days AGH550 is one of the best on the market. We were particularly impressed by the amount of air it’s able to treat. 750 square feet is a lot of area for a filter of this size. Normally, you’d need a large, heavy-duty unit to treat that much area. In addition, the filter itself is fairly powerful. It’s in line with all HEPA standards, which means it’s a great choice for anyone with allergies or asthma. The charcoal filter also makes it ideal for anyone with any kind of respiratory sensitivity. 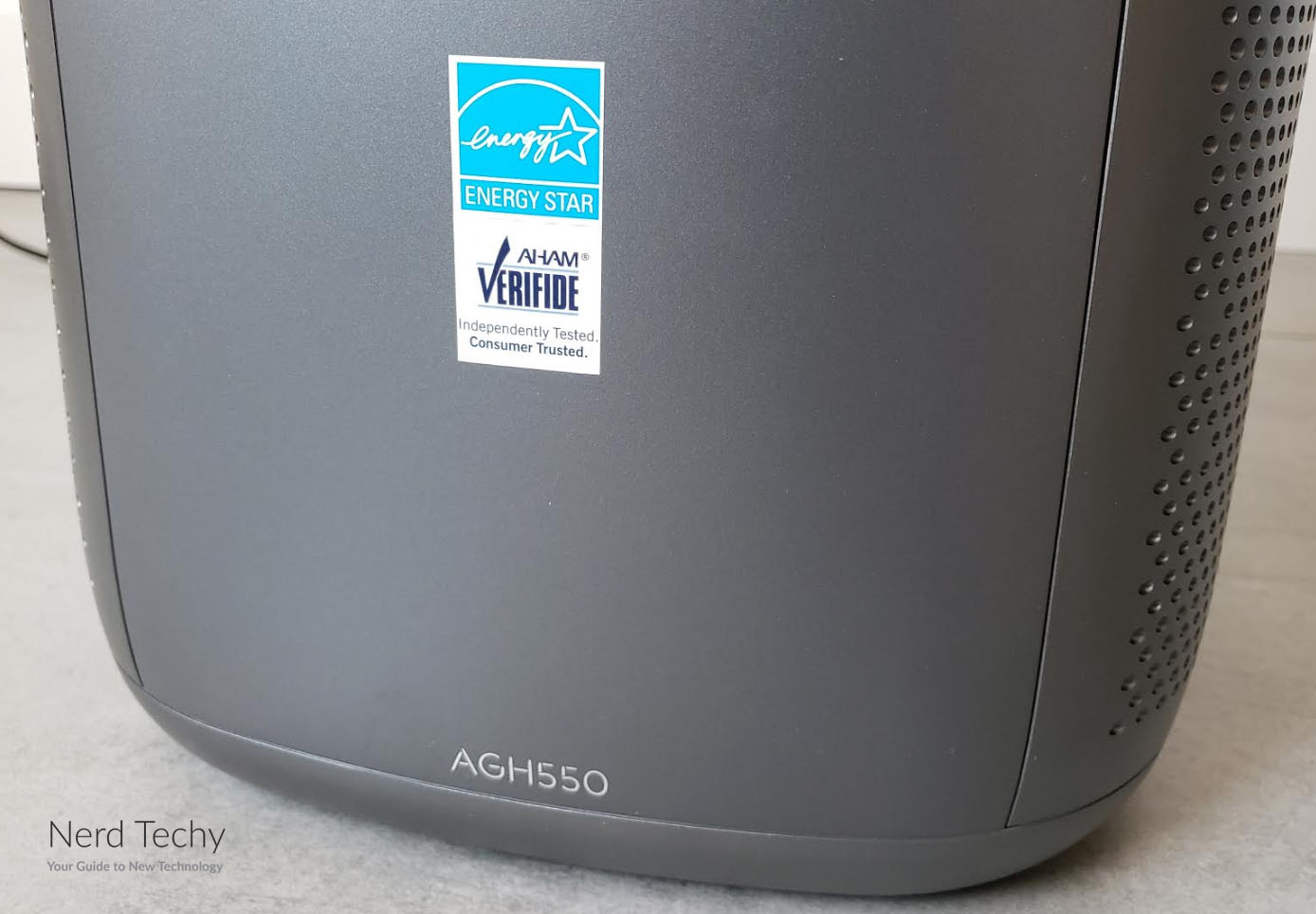 We also appreciated the large number of control options. Whether you want to use it on a timer or simply let it run automatically, it’s easy to operate. The laser air quality sensor is a great extra touch. It ensures that automatic operation is as efficient as possible.