When it first launched, there weren’t many cameras that could compete with the GoPro. Certainly not in a straight-up comparison of performance and price. But times have changed. Technology moves fast. These days, you can find some pretty formidable cameras that make many alternatives look needlessly expensive by comparison. Of course, whether or not you can get by with one of these less expensive models really depends on your sophistication as a photographer.

The Apeman A77 is a pretty good example of how cameras have quickly improved over the past few years. Though many Apeman cameras are formidable substitutes for more expensive 4K compacts, the A77 is easily one of the most impressive in the series, at least from the perspective of value. Though this camera costs a bit less than a new videogame, its performance may compare reasonably well with devices that are basically four times as expensive. 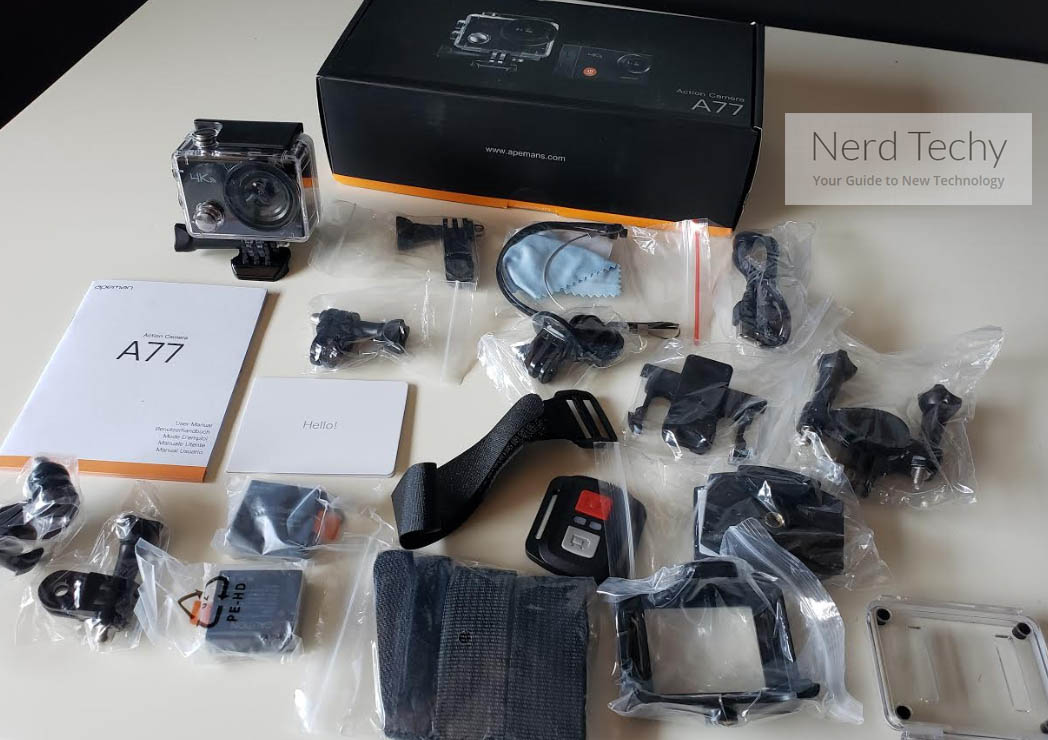 Of course, there are reasons you might want to use those more expensive cameras. Especially if you’ve got some highly specific shooting circumstances in mind, like you plan on getting a camera exclusively for diving trips. However, outside of those kind of circumstances, you have an almost equal chance of finding the A77 to be a reasonably well rounded device.

Even though the A77 ends up delivering on a wide number of features that people are looking to find from these sort of compact cameras, it doesn’t hit them all. Which means depending on the sort of thing you’re looking for from your own camera, you may or may not find the A77 will be sufficient for your needs. 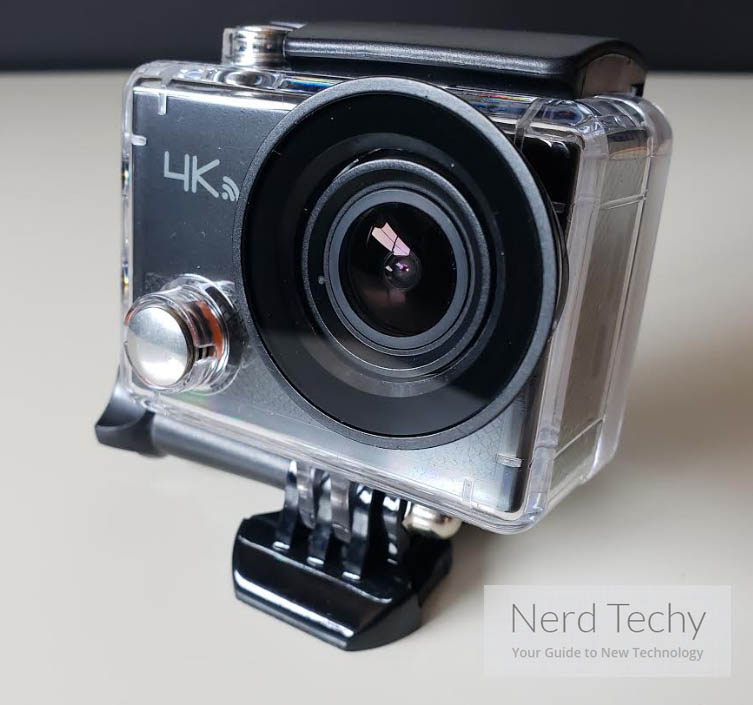 For starters, you’ll find that similar to many other Apeman cameras, the A77 is extremely compact. It measures a modest 2.36 x 1.97 x 0.79 inches, which allows the camera to fit comfortably in the palm of your hands. And it weighs about a pound, so the size and weight actually compares favorably to a smartphone.

The backside of the camera is entirely taken-up by the LCD view screen. As such, you’re working with a screen that’s got a diameter of about 2”. It keeps things reasonably clear and accurate. For instance, the colors on the screen are actually reflective of the colors you’ve managed to capture in your shot. But upon closer review, it’s really got all the same limitations you might expect of a display sized like this. 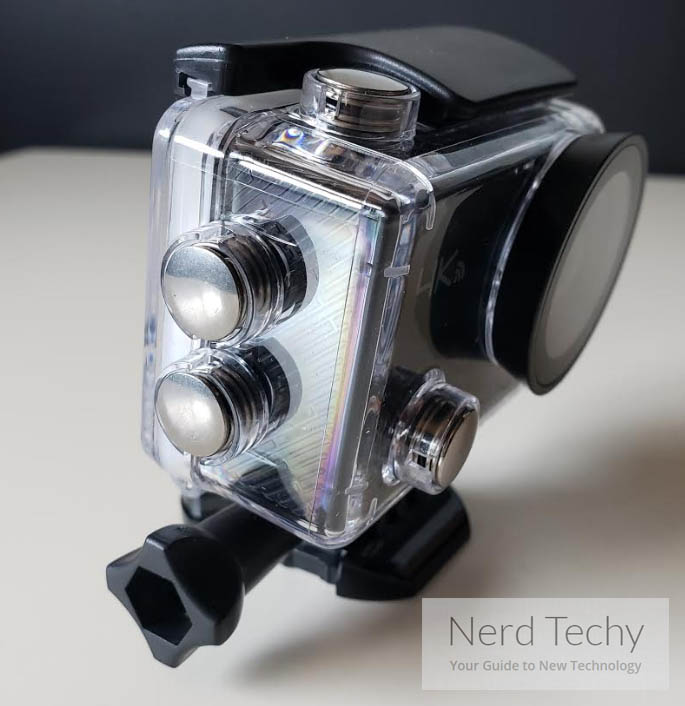 What sort of limitations? Well, physically speaking, this camera doesn’t have much of an interface to it. It’s too small and compact for that. What do you have? Well, the front side has one large “mode” button that lets you move between different styles of shooting. It can also be used to power on or power down the camera.

And the left side of the device hosts some hidden away a USB, HDMI, and SD card port. Those allow you to connect data storage devices or connect with an external display for viewing your captured content. Of course, they need to remain sealed in order to maintain the waterproof protection of the device.

Speaking of waterproofing, the Apeman A77 Action Camera is pretty clearly made for outdoorsmen. You shouldn’t have to worry about using this camera in the elements, unless you’re shooting inside extreme conditions of one sort or another. For example, you probably would want to think twice about prolonged shooting in sub-freezing conditions, or in conditions where it was too warm for humans to safely occupy. 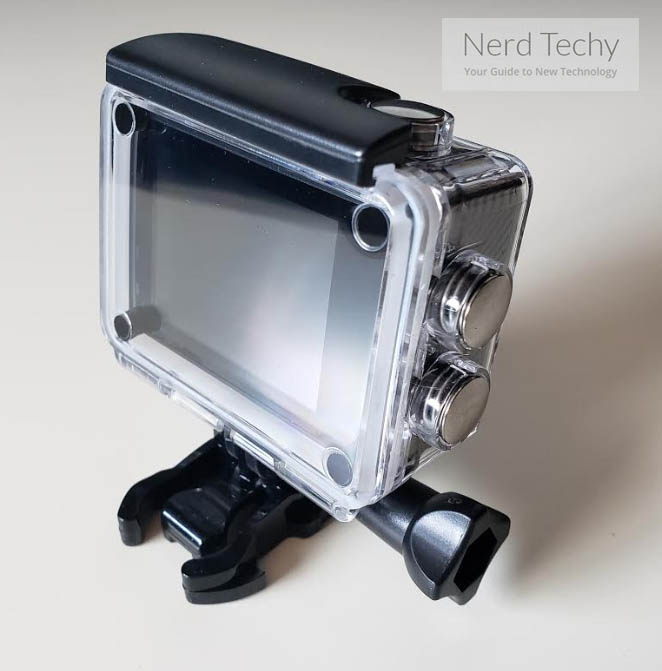 Outside of that, you’ll find the included waterproofing case protects the A77 for up to 30 meters while underwater. If you rent a submarine, then you might end up needing a camera that can handle a bit more. But 30 meters is reasonably impressive, and it compares well with the sort of protection you’d find from cameras that are literally three times as costly. So in any case, the waterproof housing lets you confidently shoot water sports, swimming, diving, surfing, and so forth.

Like many similar Apeman Action Cameras, the A77 is capable of shooting content in 4K. Whether or not you actually care about 4K content isn’t really the point. Being able to handle 4K means you can also handle every resolution beneath 4K with equal merit. And having the option to shoot in 4K is a great way of partially future-proofing your content.

In addition to capturing video well, the A77 does an equally admirable job of capturing stills. That’s largely thanks to a 16-megapixel sensor that’s been made with a lot of smart software support. Some of this support is stuff that is so simple we tend to take it for granted, but some of it is a bit more advanced. For example, you’ll find the A77 supports loop recording, time lapse shots, and a reasonably robust burst photo mode. 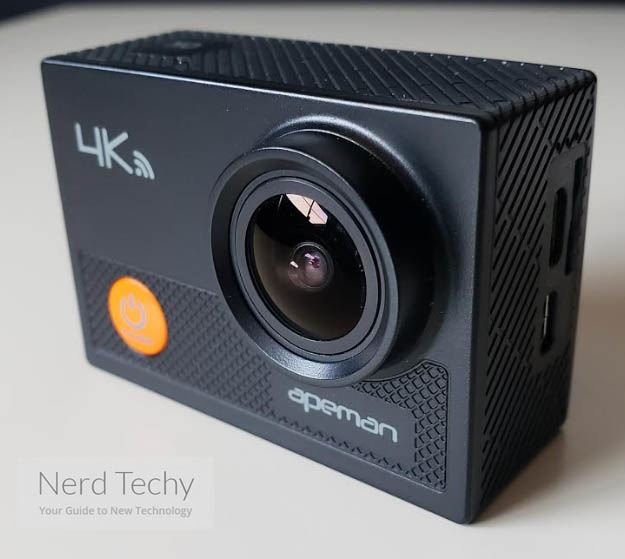 Along with a little bit of user configuration, the included 6G lens and its sensors can capture every moment you’d like to capture. Because that lens that shoots in an ultrawide 170° angle around it. That’s considerably larger than the somewhat more common 130° shots that you’ll commonly see from cameras trying to replace or replicate something like a GoPro.

As mentioned earlier, the Apeman A77 is equipped with adjustable video resolution. You can move between 4K content and 720p content with only a couple of clicks. You can also shoot at different framerates. When shooting in 4K, the two standard framerate modes are 30fps and 25fps. But if you drop towards 1080p capture, you’ll be able to raise that up to 60fps.

And when running 720p, you’re enabled to capture at 140fps. Which is actually pretty good for slow-motion footage, though it performs nowhere near as well as cameras designed specifically for slow motion. 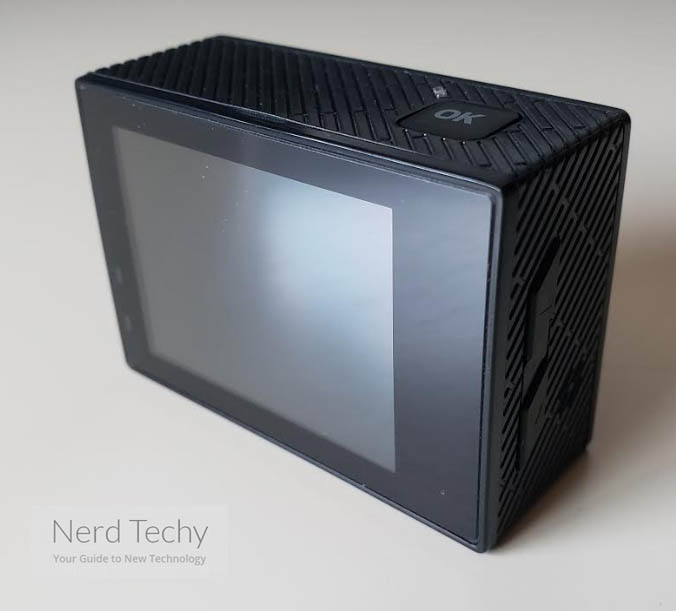 You can tell from looking at the A77’s lack of a robust physical user interface that much of the task of controlling it is done through the app. Apeman’s free app is somewhat basic, but it gets the job done. Once installed, it allows you to control the camera, preview your footage, share your content, or otherwise configure your next shot.

In addition to the reasonably strong app support, you’ll find the A77 Action camera provides more than one method of hands free mobile operation, thanks to the 2.4G remote control. The remote isn’t anything too special, but it’s a great way of managing the camera without having to always have your smartphone around to help. 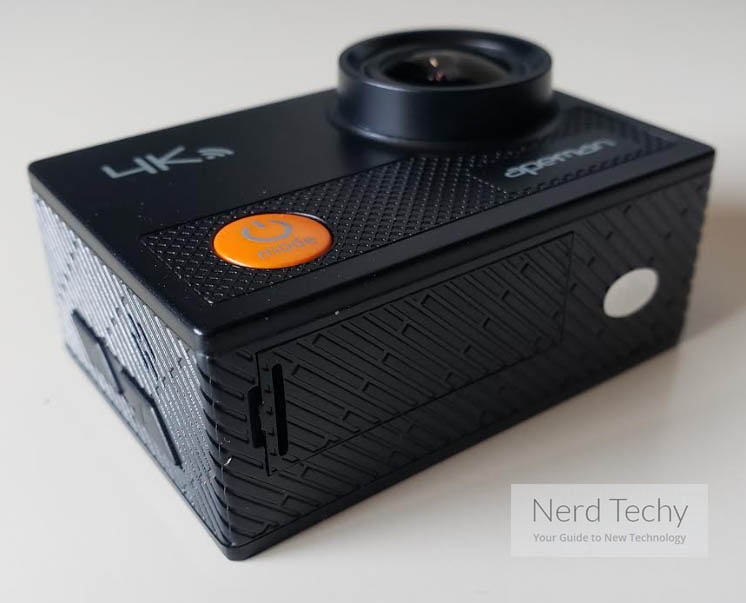 Unfortunately, you’ll find the A77 doesn’t have quite the same level of robust software support that you’d be able to get from a $300 camera. The A77 just isn’t trying to knock it out of the park, so to speak. This is a camera that seems to be aimed at offering just above the bare minimum that should be provided for a good 4K compact waterproof camera. If it’s trying to impress you at all, it only seems to do so offering things you wouldn’t expect at this price.

For instance, you’ll notice that you can set time-lapse photos which run at intervals between 2 seconds and 60 seconds. Or those photos can be remotely triggered with a little setup beforehand. In either case, you have all the range of customization options that most average users will want to get their hands on. It’s only when you start looking for great depth of customization that you might be a little disappointed. 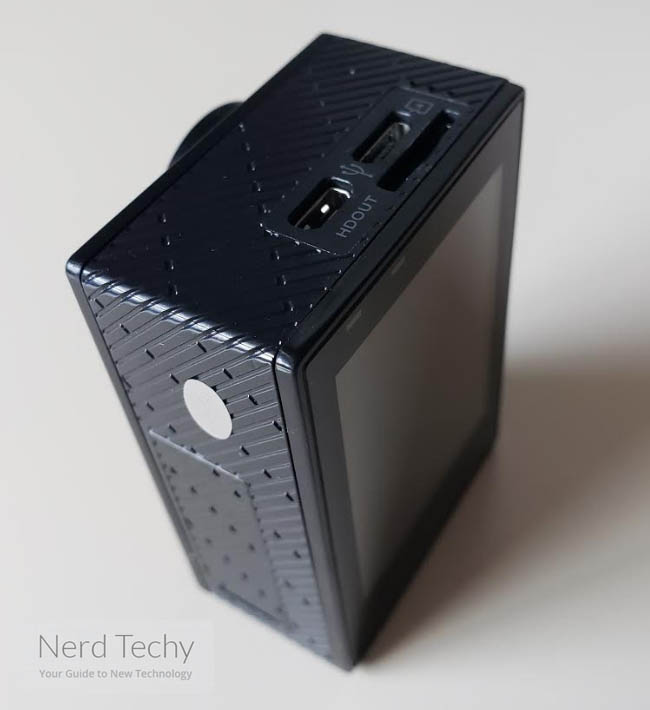 With one exception. Though inexpensive, the A77 has enormous potential for expansion. That’s because like most in the Apeman Action Camera series, this camera is capable of working alongside a variety of handy accessories. A couple of them are actually included with the A77 – mostly clips that can be used to help stick your camera to a helmet or bike.

The A77 also includes a pair of two separate 1050mAh batteries. Combined, they allowed you to record as much as 180 minutes of video. Swapping out the batteries is pretty easy, too. If you need to exceed 180 minutes, though non-standard, you can still fairly easily find replacements. Unfortunately, it does take about an hour to recharge each battery, assuming you’ve got all the right equipment to do so.

If you were looking for a larger kit of accessories, you would want to consider another camera we reviewed recently, the Apeman Trawo Action Camera. 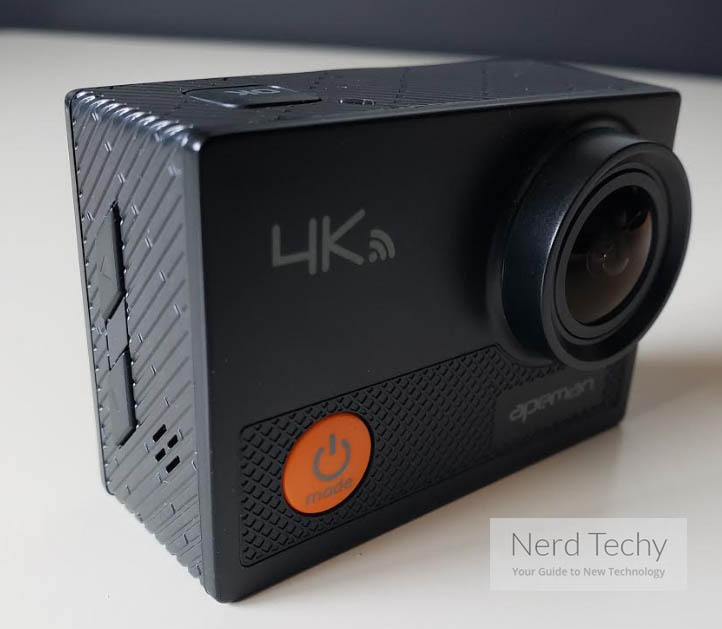 The A77 Action Camera is quite waterproof, and is even safe under great levels of submersion. But you’ll find that the wireless remote is not. That’s unfortunate, but not something that you couldn’t fix with a little creativity. Even something as simple as a sandwich bag could go a long way towards helping fix the problem.

For hard storage, you’ll want to use a Micro SD card class 10 or higher. You can probably tell from its price that an SD card is not included with the camera. However, it does include a waterproof case, bike mounting kit, helmet mounting kit, USB cable, dust cover, user manual, and pair of 1050mAh batteries. Apeman also includes a one-year warranty with all of their cameras.

Who Should Choose the APEMAN A77 Action Camera?

The Apeman A77 delivers on a number of core features that people require from these sort of devices. It isn’t trying to amaze you with new and innovative features. It’s basically trying to take great features from expensive cameras, and making them much more affordable. Which makes it closely resemble a high-end camera, in a lot of respects. 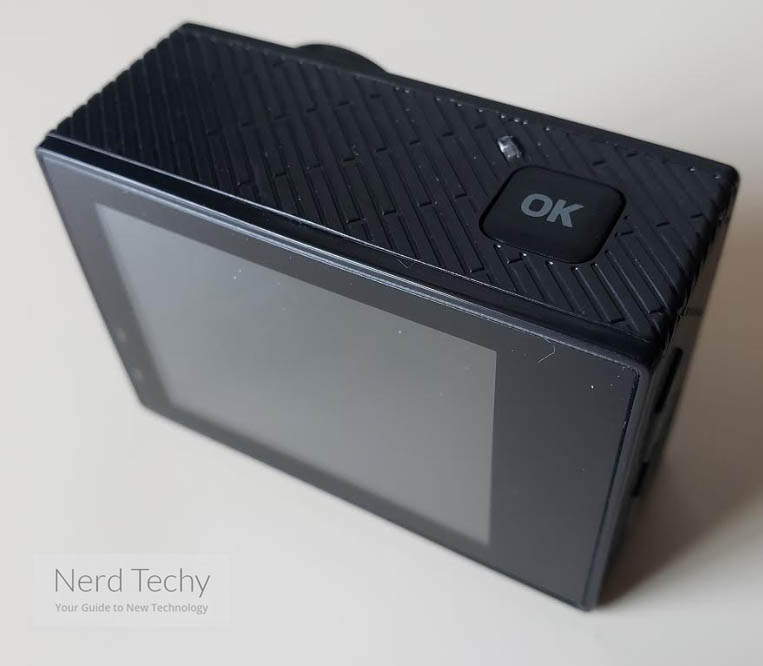 The inclusion of built-in Wi-Fi means the A77 is wonderfully well connected. Whether you’re going wireless or running a physical cable, the A77 is exceptionally easy to interact with. Amateur photographers really should have no gripes with what it can bring to the table.

From a functional perspective, this device ought to be indistinguishable from using a $400 camera — at least for people who aren’t planning on getting intimately involved with advanced settings. For professional photographers, that means the A77 might not be the right choice. But for the average person? It’s almost certainly a great choice.