Everybody knows you shouldn’t text and drive; in most states, it’s even illegal. For texting and calling on the road, headsets and other hands-free options have generally been the norm. But with the proliferation of smartphone apps, we’ve been handing more tasks to our phones.

Now, we use them as our source of music, navigation, and other functions. In response, auto manufacturers have begun offering ways to connect your phone to your car.

Bluetooth has been the standard for several years now. You hop in your car, turn on your phone’s Bluetooth, and pair up. Then, you can use your navigation app, or carry on phone calls through your car’s speakers.

But Apple has upped the ante with their CarPlay service. CarPlay offers a bunch of extra features for compatible vehicles, further integrating your phone and car. So what is it, and how does it work exactly? And is it really better than Bluetooth? Let’s take a closer look, and see what it’s all about!

What is Apple CarPlay? 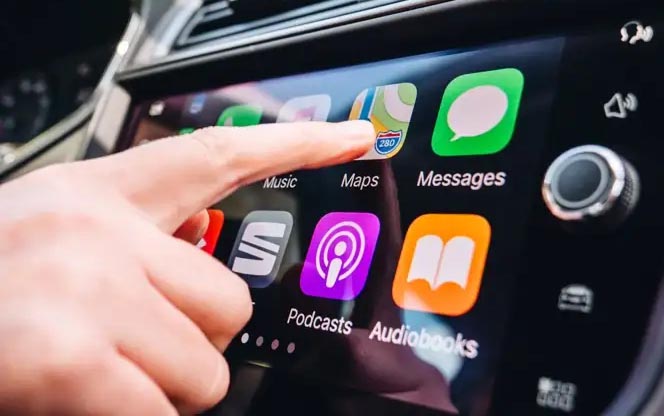 To begin with, you might own a car that comes with CarPlay already installed. Obviously, this is no reason to run out and buy a new car. But many newer vehicles do come with CarPlay ready to go. These include many models from Ford, Chevy, Jeep, Honda, Hyundai, Toyota, and dozens of other automakers.

That said, if your car doesn’t come with CarPlay, you can still make it work. Provided your car has Bluetooth, all you have to do is use a third-party head unit with CarPlay installed. They cost a few bucks, but they’ll get you connected in no time.

The interface is a little bit different from ordinary iOS. While it looks and feels the same, it’s geared especially towards people who are driving. To begin with, this means you won’t be able to access certain apps. Games, video streaming apps, and similar apps are simply going to be unavailable, for safety reasons.

Other apps will appear in a modified form. For example, Spotify will allow you to play music, but not watch videos. Messages will automatically switch over to voice modes. So instead of the texts appearing on the screen, there will be an audible readout. You can then answer the text by using voice to text.

On the screen, you’ll see shortcuts to all available apps, and a left-hand sidebar with a home button. The sidebar will also show any apps that are running in the background. 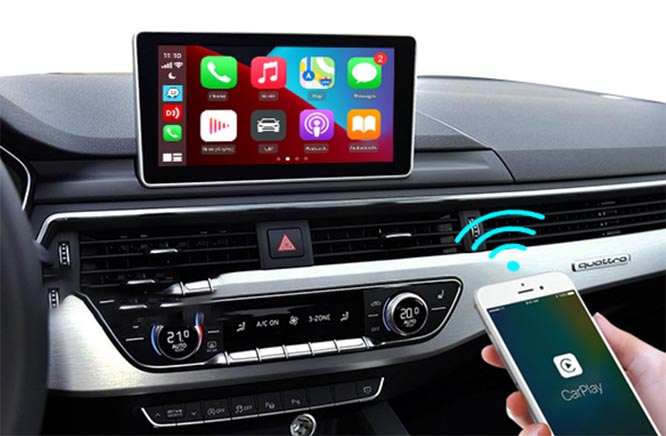 Not only that, but you’re not locked out of your phone, so passengers can use your other apps. That said, you can only do one thing at a time. When you’re doing something on your phone, that will be reflected on the dash display.

If the app you’re using is unavailable on CarPlay, it will appear only on your phone. Instead, your display will simply return to the home screen. When you go back to a CarPlay-compatible app, that will come up on the screen.

Controls will be different depending on your vehicle. For example, some head units have touchscreens, others have knobs, and others have buttons. Each different head unit will work a bit differently, so there can be a bit of a learning curve.

Thankfully, that’s not a concern as often as you might think. Within CarPlay, you can do just about everything with Siri. In fact, Siri herself is even modified when you’re using CarPlay.

When you ask a question, the answers will be tailored towards driving and navigation. Answers on other topics will be shortened. For example, if you ask about the history of China, you’ll get a 30-second answer instead of a five-minute answer.

To use CarPlay, you’ll have to plug into your car’s USB port. Simply use your phone’s Lightning cable and plug it right into your car. On the plus side, you’re also charging while you’re hooked up! 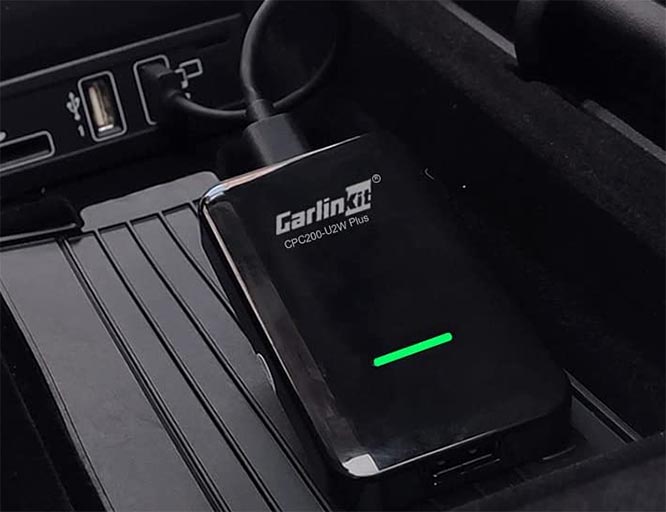 That said, not everyone wants to fiddle around with USB cables every time they get in the car. For another alternative, consider a CarPlay wireless adapter. The adapter stays plugged into your USB port, and you connect your phone via Bluetooth. This lets you quickly get in and out of your car, without messing with any wires.

So, what do CarPlay and Bluetooth have in common, and what do they do differently? Both of them allow you to make phone calls and use voice-to-text. Both also support music streaming and voice alerts from your Maps app. That said, there’s a world of difference between the two. If you’re trying to choose between them, there are some things you should keep in mind.

Perhaps most importantly, Apple CarPlay allows you to use Siri. This gives you truly hands-free control over your phone, so you can keep your eyes on the road. With Bluetooth, you still have to perform a lot of functions manually. This is less convenient, and it can also distract you from your driving.

Bluetooth is purely wireless. You get in your car, and you pair wirelessly. With Apple CarPlay, you can use either a wired or a Bluetooth connection. 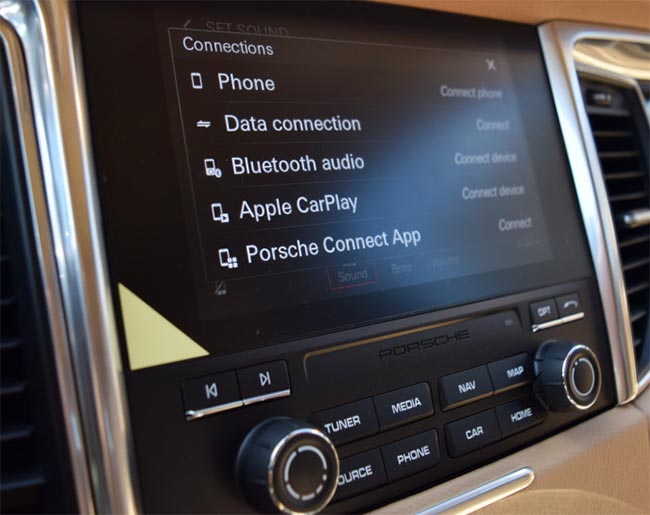 In any vehicle, you can plug your Lightning cable into your USB port. Some newer vehicles now support wireless Apple CarPlay, as well. And if yours doesn’t, there are wireless adapters available.

Moreover, CarPlay gives you access to a wider variety of apps. You can view Maps on the on-board display, access your contacts, and many other functions.

Why Not Just Use a Dock?

For years, people have been using little plastic cell phone docks to use their phones in the car. They cost just a few dollars, and you can view your GPS app just like a traditional GPS unit. Why not just use a dock like you’ve always done?

The number one reason to use CarPlay is the extra features we already touched on. When you’re using a dock, you’re still facing all the issues you run into with Bluetooth. With CarPlay, you get Siri, along with enhanced support for apps like Spotify. You’re getting the benefits of a dock, plus more.

Another good reason to use CarPlay is the size of the display. The iPhone 13 looks beautiful, but it’s a little small to view from your dash while you’re driving. With CarPlay, you’re using your vehicle’s built-in display, which is almost certainly larger. This makes it easier to view your GPS, or perform just about any other function.

Finally, CarPlay is easier on the phone. When your phone is in a dock, playing music and running a GPS app, it’s putting out a lot of heat. Depending on the design of the dock, your iPhone can get pretty hot. CarPlay lets you leave your phone free to breathe, and takes some of the load off of your processor. 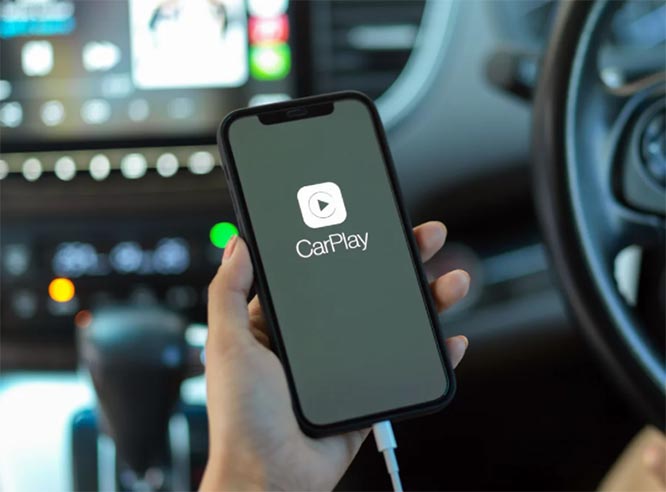 Can You Use CarPlay in an Older Car?

If you want Apple CarPlay but don’t want to buy a new car, we don’t blame you. CarPlay is nice, but it’s not worth the cost of a whole vehicle. Thankfully, there are ways to upgrade your older car so it will become CarPlay-compatible.

To do this, all you have to do is replace your car’s head unit with one that’s CarPlay-compatible. The head unit is the display, radio, and that general portion of your console.

The most important thing to know is the size of your head unit. Head units are measured by DIN, which is short for “Deutsches Institut für Normung.” This is a German standard that’s come to be used through the entire auto industry. Most head units from before 2010 are single-DIN. Head units from after that are almost universally double-DIN. Make sure to choose the correct size, or the head unit isn’t going to fit into your car.

No matter how you cut it, Apple CarPlay represents a significant evolution in how we drive with our phones. We’re not saying you should go out and buy a new car, or spend $1,000 on a new head unit. Bluetooth still provides plenty of functionality, including phone calls and navigation.

That said, if CarPlay is an option for you, you’re looking at a ton of benefits. You get to use voice commands for pretty much everything, which reduces your distractions. And you get a full-on iOS interface right in your car’s head unit, for easy access to your apps. If it’s an option in your car, you should definitely be using it!