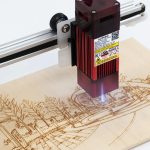 If you’re trying to craft something truly unique, an engraving is a great way to do it. Tee shirts, hats, and mugs are great for branding, and they make great free giveaways. But an engraving takes more time, effort, and expense. You can engrave a metal platter as a gift, or a wood panel to make a beautiful woodcut. You can even use an engraver on stone or fabric, depending on the type of laser. This gives you a ton of options, and plenty of ways to make your own individual creation.

That said, there’s a lot that goes in to making a good engraver. If you’re not careful, you could easily end up with a tool that doesn’t do the job you need. For one thing, it’s important to find an engraver that’s easy to set up. Calibrating the laser can be a real pain, and if the design is poorly engineered, it will only be more painful. Another thing to look for is precision and laser strength. A fat laser will generally apply more heat to tough surfaces like stone. But if you want to make finely-detailed artwork, a narrower laser will get you better results. You also need an engraving machine that’s compatible with your computer and software. Otherwise, the other details are going to be a moot point.

We’re about to review the Aufero Laser 1 Laser Engraving Machine. This is an easy to configure engraver that’s perfect for beginners. It also has enough laser options to create beautiful, professional-looking artwork. And as far as compatibility goes, it works with just about any computer. But to truly understand how well it performs, we’re going to need to take a deeper dive. We’ll have to look at the details of the design, as well as the actual engraving performance. We’ll have to talk about what materials you can work with, and how the setup process works. After we’ve examined each of these things, we’ll be able to deliver an educated judgement. Let’s get started, and see what we learn! 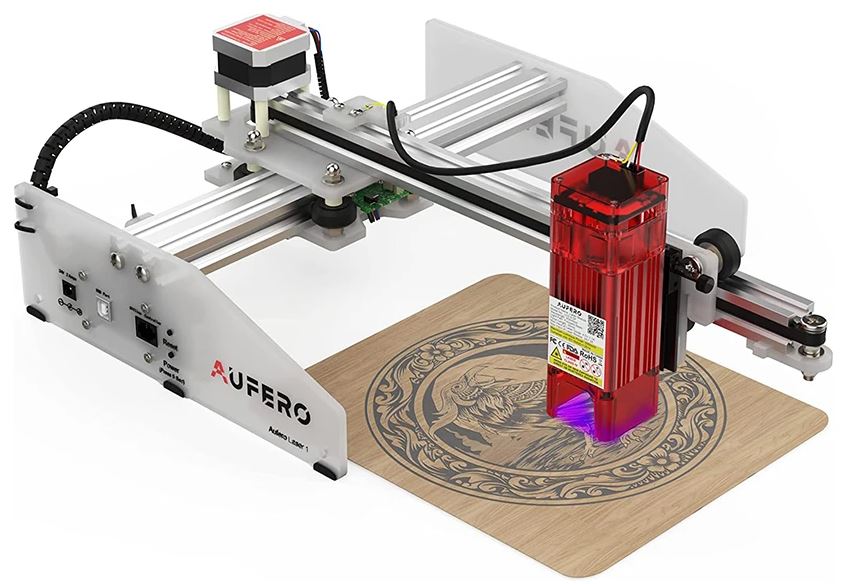 The Aufero Laser 1 Laser Engraving Machine consists of a laser etching mechanism, mounted on a frame. The laser itself is fairly small, less than an inch on each side, and about three inches tall. It’s red in color, and sits on the side of a metallic rail. There are wheels on the side of the mount, so the laser can move freely up and down the rail. The rail itself is mounted on another rail at a 90-degree angle. That mount is also motorized, so the first rail can move back and forth along the second rail. As a result, the laser can move in any direction, across an engraving area of 180mm x 180mm. That’s just a hair over 7” x 7.” 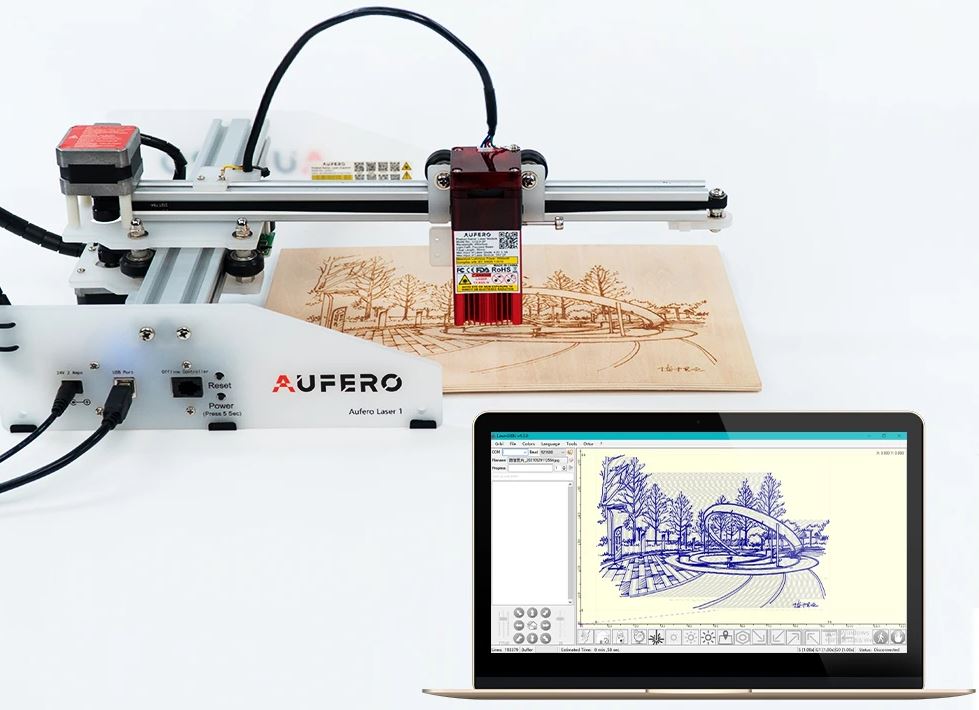 The second rail is attached at both ends to a pair of broad, white plastic legs. These extend about half the length of the rail, providing a sturdy base even when the laser is fully extended. The total length of the engraver, from the backs of the legs to the front of the rail, is 16.6 inches. The width is 12.4 inches, and the height to the top of the motor is 4.9 inches. Power lines run from the laser to the first motor, and back to the second motor. From there, they run around the back of the machine to the inside of the right leg. Here, you’ll find the power port, data port, and control buttons. And unlike many engravers, the Laser 1 comes fully assembled, so you don’t have to put everything together. 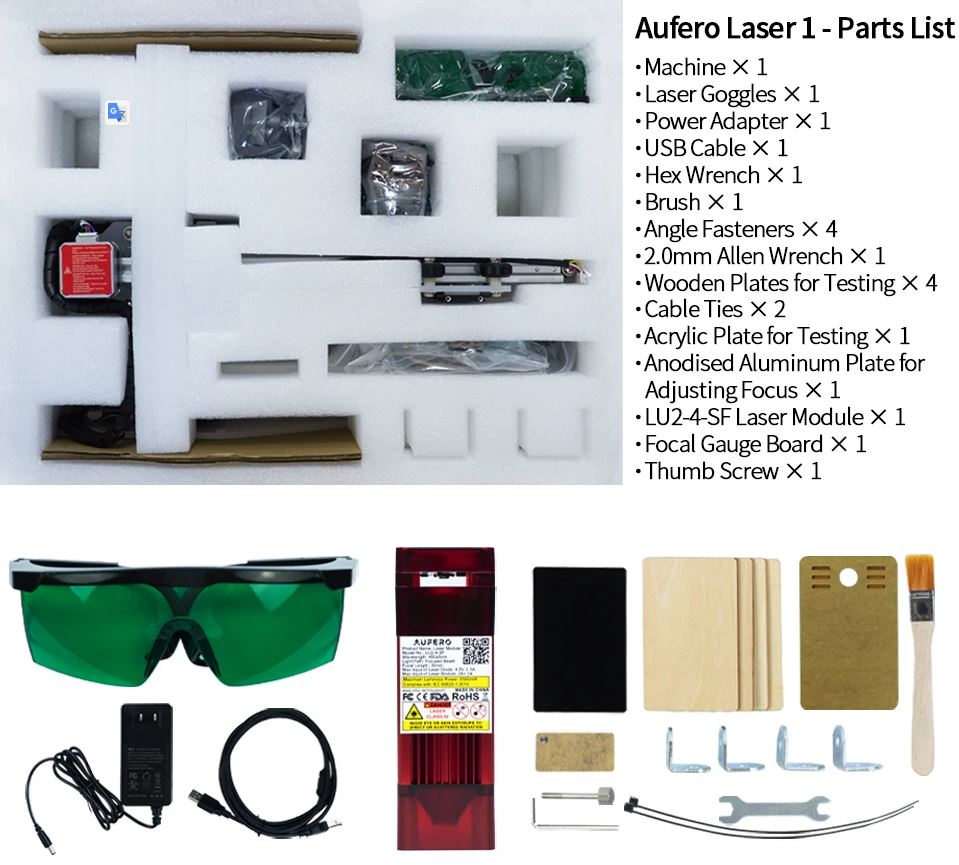 Along with the engraving machine itself, you get a large number of accessories. To start with, there’s a DC power cord, as well as a USB Type-B to Type-A data cable. There’s a set of laser safety goggles, which you should really wear when you’re using the engraver. There’s an Allen wrench, hex wrench, cleaning brush, and cable ties for maintenance. There are also four acrylic testing plates, a dull gauge board, and a single metal focusing panel. Finally, there’s a set of four L-shaped brackets. These can be used to hold an object in place while you’re engraving on it. 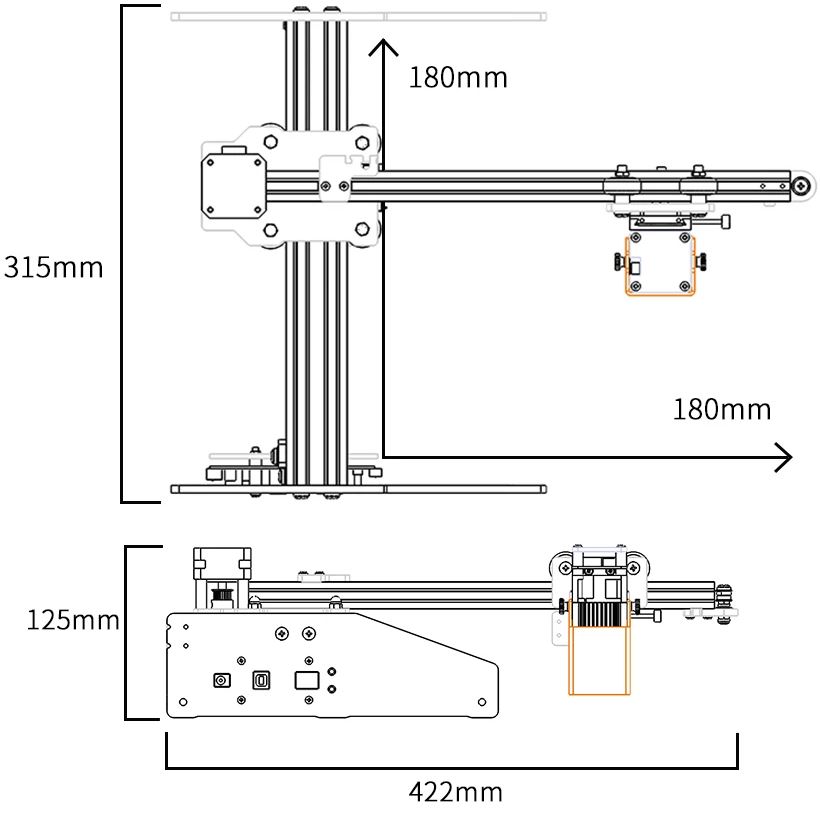 In addition to all this, Aufero offers a handful of optional extras for their engraver. These are not included in the package, but need to be ordered separately. Still, it’s worth taking a look at your potential options. First off, there’s a motorized rotary roller. This can be used for engraving round objects like mugs or cans. Second, there’s a powered enclosure with a vent tube. This is useful if you’re engraving a material that produces noxious fumes. Finally, there’s a screw-operated lifting device. This can raise or lower an object, which makes it significantly easier to get your laser in focus. 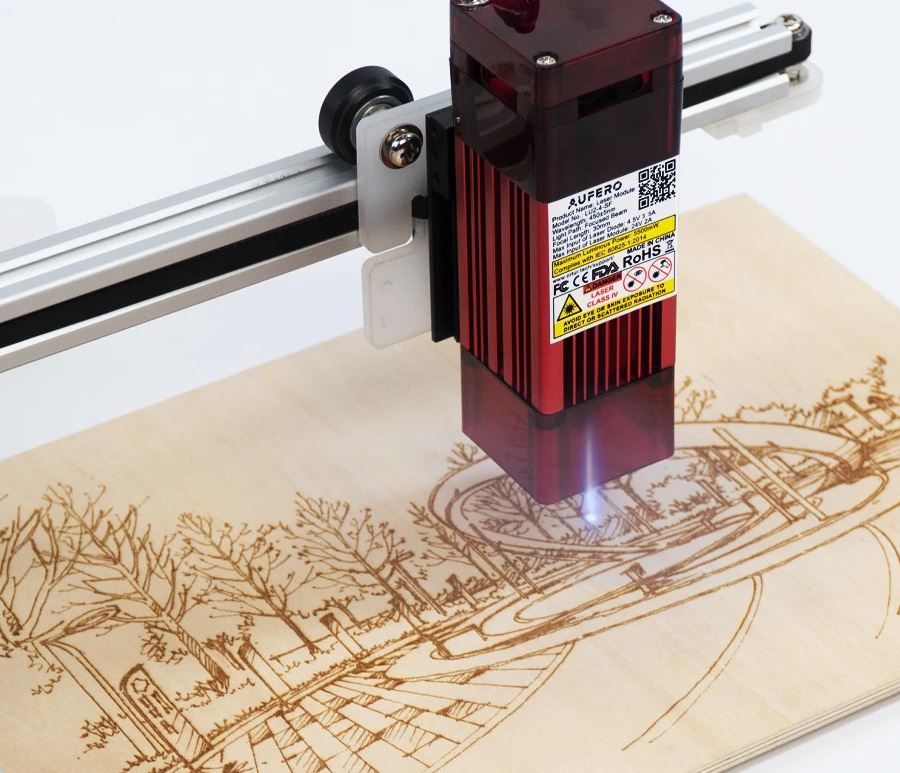 Regardless of any add-ons, you’re covered by Aufero’s 12-month manufacturer’s warranty. If the engraver fails unexpectedly, you’ll be protected. They also offer a 30-day return window, even if you just decide you didn’t want the engraver. And all of their support staff are located in the US and Europe, so you know you’ll get great service. 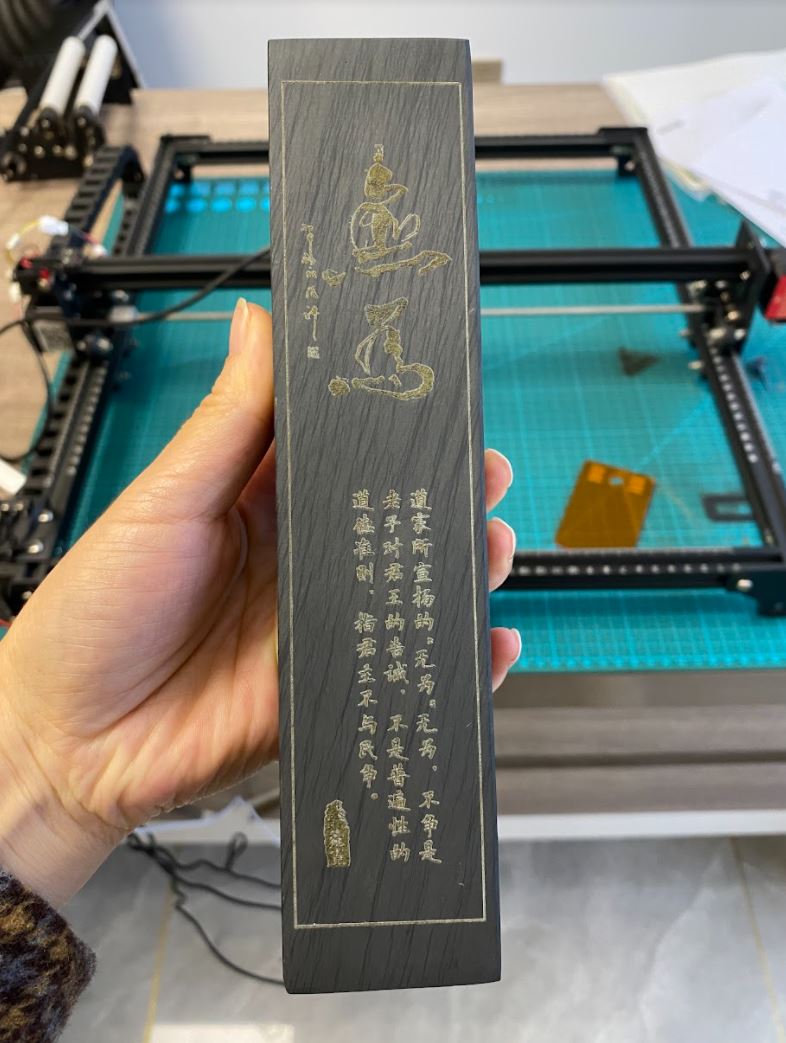 The Aufero Laser 1 is easy to set up, even for a total beginner. You set it on a flat, level surface, and plug it into your computer via the USB Type-B to Type-A cable. Then you fire up your favorite engraving software, and follow your software’s calibration process. The Laser 1 is compatible right out of the box with almost any engraving software. These include paid programs like LightBurn, and free programs such as LaserGRBL. So if you’re already experienced with one of those programs, you won’t have to re-learn the process.

Support is also very good when it comes to various image formats. The Laser 1 supports BMP, JPG, JPEG, PNG, SVG, and many more. If that’s not enough, this engraving machine works with pretty much any operating system. It works natively with Windows 10 and Windows 8. And you can download and install drivers for Windows 7, Windows XP, Mac OS, and Linux. The only catch is that the device has to be an actual computer. It can’t be a smartphone or tablet. But in most cases, you wouldn’t want to use an engraver with a mobile device to begin with. So for all intents and purposes, you can use it with any computer you want.

In addition to its wide compatibility, this is also one of the safest laser engraving machines on the market. In fact, there are four major safety features worth pointing out. To begin with, there’s a built-in tilt sensor. If the machine senses that it’s starting to tip, the laser will automatically shut off. Second, there’s a time detection system. If the laser stays in the same spot for too long, it will automatically be deactivated. Third, the switch for the machine physically cuts the connection to the laser. So even if something else malfunctions, the laser won’t turn on by mistake. Finally, the laser will deactivate if the USB connection is lost. This keeps it from going off on its own without input from your computer.

So far, we’ve talked a lot about the design and compatibility. But how does the Laser 1 actually perform when it’s time to start engraving? To begin with, you get some of the fastest engraving performance you’ll find at this price point. Aufero has used an upgraded motherboard, which allows for higher resolution and faster processing speed. In total, you can run the engraver at as high as 5,000mm per minute, or more than 16 feet. That’s incredibly fast printing, so you don’t have to wait forever for the machine to work. 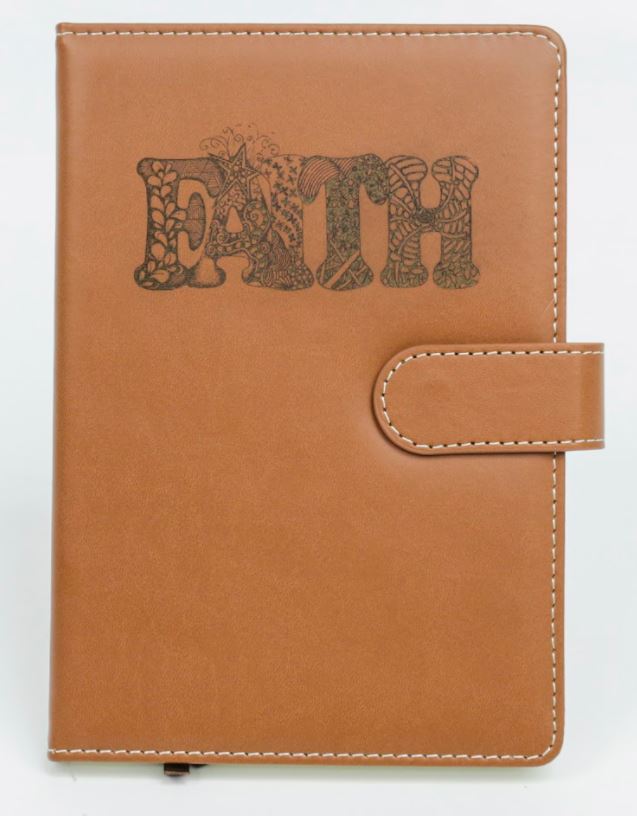 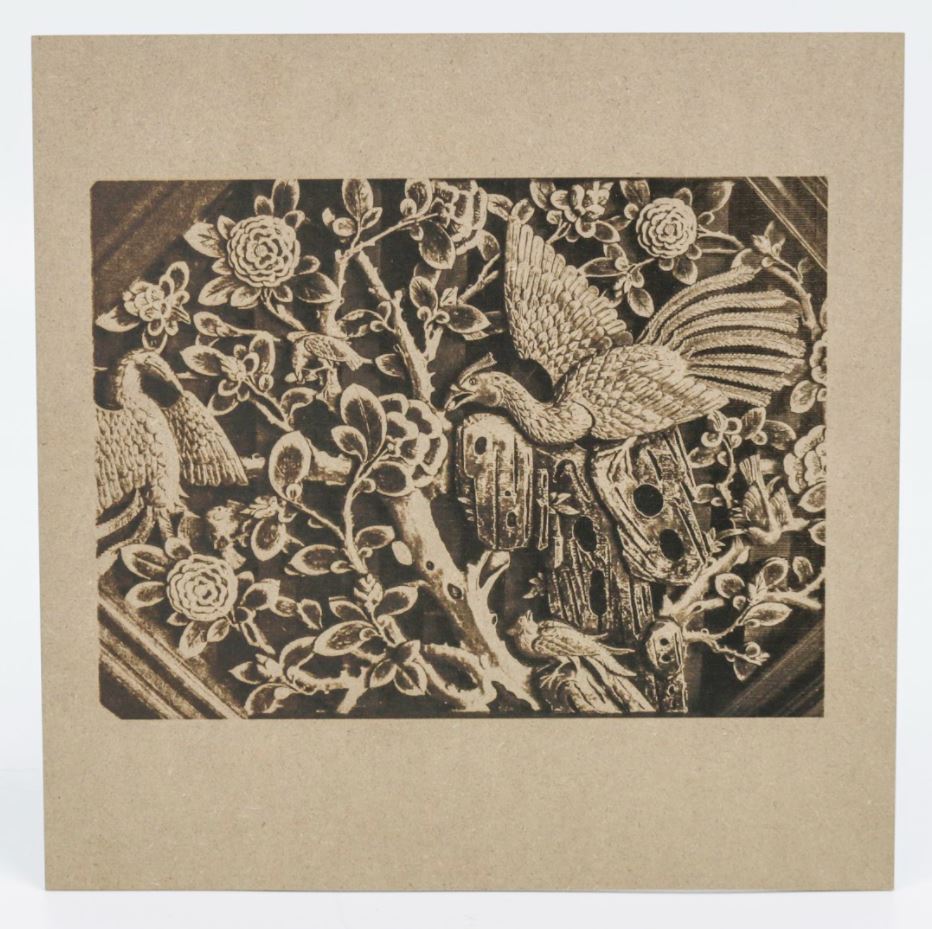 Of course, a lot of this depends on which laser module you’re using. Different lasers have different power levels and thicknesses, and take more or less time to work. Another major factor that affects your print speed is the material. Fabric will etch incredibly quickly. Wood takes a bit longer, and metal and stone take longer still. Keep in mind that white surfaces will not absorb any heat, and the laser will pass through transparent material. For white or transparent surfaces, use a black marker first so the heat from the laser will be absorbed. 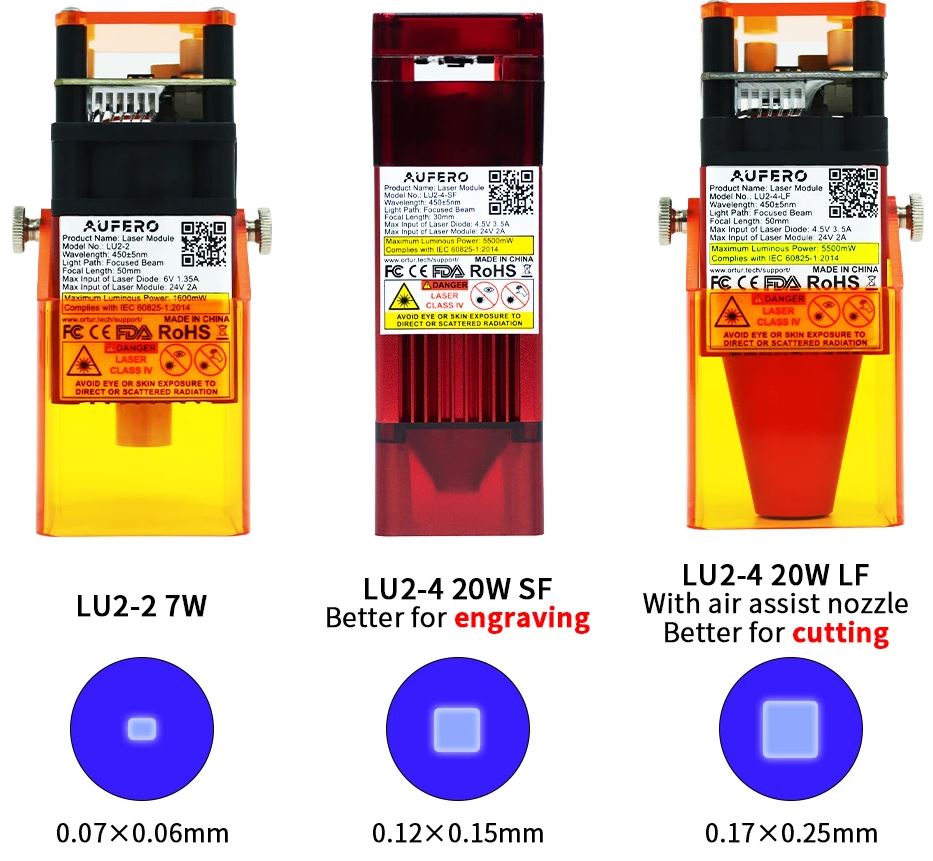 The base laser module is the LU2-2. This one has a power of between 1,000 and 1,600mW, the lowest of the three. It’s better for softer materials like wood, and takes longer on metal and stone. However, the laser point is miniscule, at only 0.07mm high and 0.06mm wide. This makes it ideal for highly-detailed images where you don’t want to see individual lines. 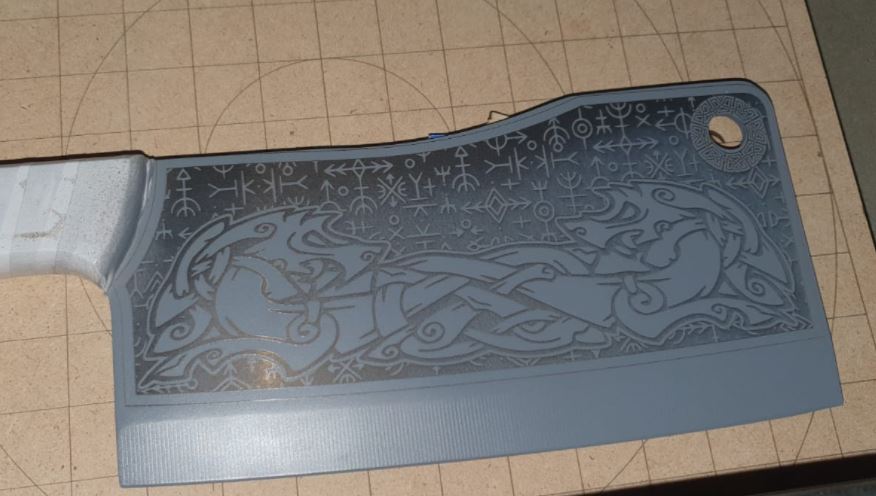 The LU2-4-SF is significantly more powerful, at 4,500 to 5,500mW. As a result, it works a lot faster for engraving hard materials like metal and stone. It can even be used to cut some thinner materials. However, the laser spot is much larger, at 0.12mm x 0.15mm. This means you won’t get quite the same fine level of detail as you would with the LU2-2.

The LU2-4-LF is similar to the LU2-4-SF, but it has a longer focus. This makes it less useful for engraving, but significantly better at cutting.

The Aufero Laser 1 Laser Engraving Machine is a highly effective piece of equipment. It’s capable of a wide variety of tasks, from engraving lightweight materials to cutting thin sheet metal. You can engrave fine greyscale images, or rush through less detailed images with the alternate lasers. The only downside is that a lot of the optional parts cost extra.