Creating your own Blu-ray discs is a fairly straightforward and easy task, but determining the best discs to burn to can be a whole different story. Whether you’re backing up important documents or creating and copying movies, Blu-ray technology offers one of the best ways to save your important data on physical media. Rather than saving to a cloud server or backing up to an external hard drive, Blu-ray discs give you a tangible way to backup your digital possessions with the reliability and longevity you need. 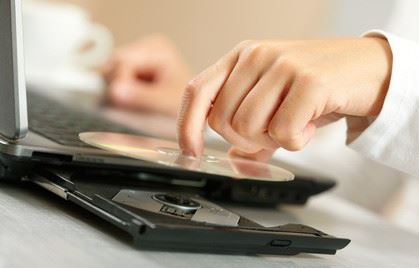 There was once a time where CDs were the ideal choice, but these only offered up to 682 MB of storage. Then along came the DVD, offering up to 4.7 GB per disc and eventually 8.5 GB using dual layer technology. Now, in 2017-2018, we have Blu-ray discs – offering up to 50 GB per layer with specific versions able to reach capacities that can exceed 100 GB.

Although we’ve previously covered some of the best external Blu-ray burners and the best internal Blu-Ray burners, there’s one detail we haven’t yet covered – which blank Blu-ray discs are the best to use? To determine an answer to this common question, we’ll first go over some of the specifics and discuss individual differences of the different types available. 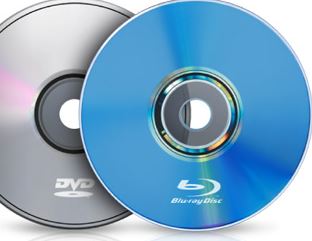 Backing up your important documents, media, programs, files, etc. is a common task that most individuals are often faced with. However, many will simply save to an external hard drive or pay for a cloud service to remotely store their data on a hard drive somewhere else.

That’s all fine, until something happens. The truth is, hardware fails – discs simply don’t. Once you’ve properly written to a blank disc, your data is physically tangible, safe, and literally in your own hands. As long as you don’t crush, scratch, or destroy the disc, it’s reliable and accessible for decades to come.

When first available several years ago when Blu-ray first came out, the only kind of blank discs that you could use were the single layer variety. They’re typically what most individuals use since each one offers up to 25 GB of storage – plenty of capacity for most situations.

However, over time, dual layer discs started to appear. These offer up to 50 GB of storage on a single disc since they’re comprised of two 25 GB layers rather than one. Although priced a bit more, dual layer discs can hold double the data. 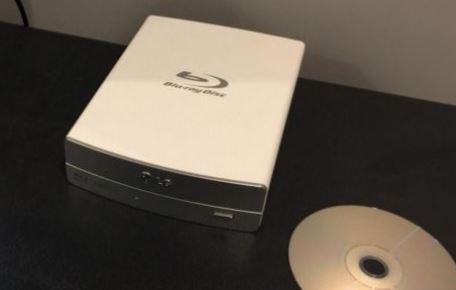 Although priced considerably more than a 25 GB (single layer) or 50 GB (dual layer) disc, a BDXL disc offers a whopping 100+ GB capacity. Created in both TL (triple layer) and QL (quadruple layer) versions, BDXL discs give you the ability to save up to 128 GB on a single disc. However, the QL 128 GB discs never really took off as they aren’t available for sale anywhere. Rather, the TL discs filled their spot and are now considered the standard for the highest capacity, currently available at around $10 per disc, allowing you to store up to 100 GB of data.

One of the most important factors to consider when creating a Blu-ray disc is how it’s going to be used. There are few main types – BR-R and BD-RE. Your standard, one-time use blank Blu-ray disc is the BD-R variety that can only be burned once. The “R” stands for “recordable” – these are the most commonly used of the two, often priced a bit less since you aren’t able to delete or remove data once it’s burned onto the disc.

The other kind, BD-RE discs, give you the freedom to burn and delete files as many times as you’d like. The “RE” stands for “rewritable” – although usually priced slightly more, these can be written multiple times, over and over again. They’re the best option for those who need to burn to a Blu-ray disc, but may need to reuse the disc, remove the data, or keep it for more than one use.

The amount of time it takes for your burner to record or copy to a blank disc will be determined by a few factors. Most notably, the speed of your optical drive, the kind of disc you’re using, and the speed it’s rated for. As the drive speed increases, the write time will decrease since the data rate will therefore increase as well. Although speed can seem like a fairly important factor for most, it’s important to know that whether you’re burning at 4x or 16x, the disc you’re creating should turn out fine either way – one will just take a bit longer to complete than the other. 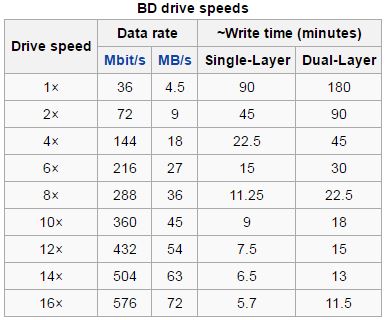 As of now, there are blank Blu-ray discs available in speeds anywhere from 1x all of the way up to 16x. See the chart from above Blu-ray WikiPedia page to gain a perspective on how to write time correlates with the drive/disc speed.

Built for long lasting durability and trusted among a majority of consumers, the Verbatim 25 GB 6x Blu-ray Discs boast a huge amount of reliability since they’re specifically designed by a trusted name brand. Although rated for 6x, they can be supported up to 8x, 10x, or 12x speeds using some of the latest Blu-Ray optical drives from a variety of manufacturers – Panasonic, Pioneer, Sony, etc. 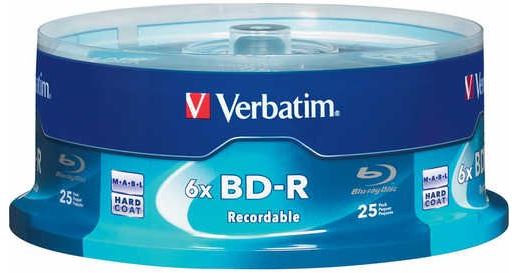 What makes Verbatim truly stand out from the rest is their unique “Hard Coat” feature that keeps scratches at bay. Because of this coating, the bottom of the discs are much more resistant to scratches, fingerprints, and dust accumulation over time. Best of all, Verbatim is a brand name that’s been in the industry for over 40 years. Additionally, they back all of their recordable Blu-ray discs with an impressive limited lifetime warranty that’ll assure they work just as well as the day you originally burned it, decades down the road.

If you need a bit more capacity and want to take advantage of dual layers, you’ll need to spend a little bit more. We recommend sticking with the Verbatim 50 GB 6x BD-R DL Discs since they offer the best speeds and the same unique technology as the aforementioned single layer variety above. 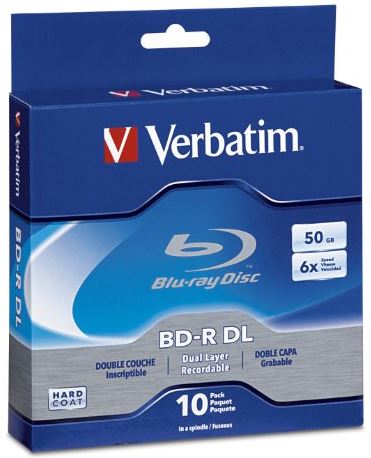 Available in either one, three, or ten per case, the dual layer Verbatim discs have an approximate one hour recording time, but this is also dependent on the optical drive you’re using and the specific task at hand. Either way, they’re specifically optimized for HD content and are another favorite of ours since they never seem to skimp on quality. These too are coated with “Hard Coat” technology as a preventative measure to keep them in perfect condition over time. Also, the limited lifetime warranty is one of our most favorite perks of the Verbatim brand.

As one of the most expensive but highest capacity blank Blu-ray discs currently available, the Verbatim M-Disc BDXL boasts a 4x speed – quite impressive for the amount of capacity these single discs can store. Traditionally, most BDXL discs are of the 2x variety and are twice as slow. The M-Disc by Verbatim is one of the leading choices that’s withstood rigorous testing for durability by the United States Department of Defense. 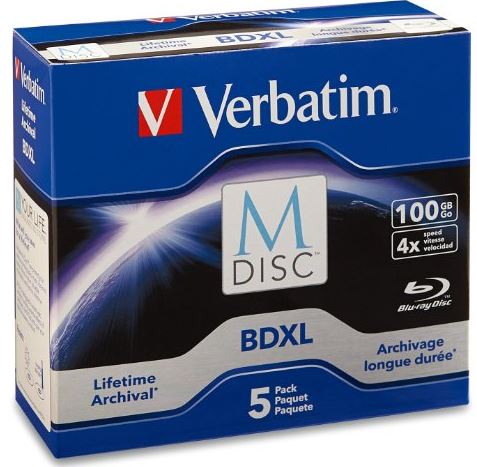 Although you’ll need to invest in a BDXL specific optical drive, these are considered the best of the best when it comes to both reliability and longevity. In fact, all stored data is uniquely engraved and based on specific ISO/IEC 16963 testing, they have a projected lifetime of several hundred years. Unlike some traditional discs, these are designed to be resistant to a wide range of environmental exposure such as variations in temperature, humidity, and light levels.

At this point, it’s probably very clear to you that Blu-ray discs can offer a stunning amount of capacity with multiple layers, but the truth is – many of us simply won’t need the highest capacity or the “name brand”. If you’re looking for value and full compatibility between virtually all Blu-ray burner drives, Optical Quantum offers the best of both worlds. 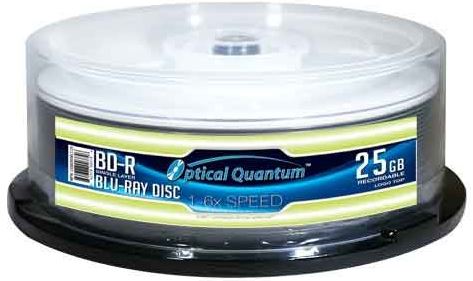 Available in either 25 or 50 pack spindles, these single layer BD-R discs hold a 25 GB capacity and work with any speed up to 12x and 14x (dependent on the brand/model of your optical drive). Said to work just as well as the Verbatim brand, they’ve been gaining popularity over the last few months. Backed by hundreds of positive consumer reviews, they’re the perfect option for those looking to stay within a certain budget. 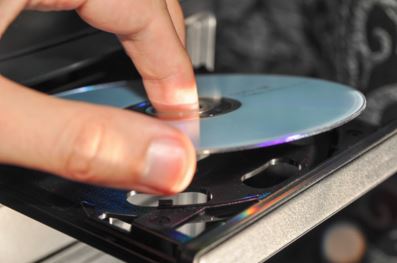 We hope that we’ve given you a clearer understanding regarding the different types of Blu-ray discs, their uses, and the differences between each other. We’ve outlined a few fantastic options if you’ve recently been looking for the best blank Blu-ray discs with the most reliability and best performance. Need any further help? Let us know – feel free to leave a comment if you have any questions or need some additional assistance.