Nowadays, all the cool kids are listening to music on their streaming services. But streaming services aren’t always a practical option. For one thing, if you’re taking a road trip, you might not always have a reliable cell signal. For another thing, streaming services only work for music that they host. Depending on what artists you want to listen to, you might be out of luck. This is especially true for local artists, or if you’re a musician yourself. Finally, there’s something tangible about holding a physical CD that makes it more “real” than digital music.

But if you want to burn your own CDs, you’re going to need some blanks to get started with. That’s why we’ve decided to review the best blank CDs for burning music. We’ll start by reviewing the Verbatim CD-R. These basic, affordable discs come in a stack of 100 for bulk use. Next, we’ll look at the Maxell High-Sensitivity Recording Layer Recordable CD. These CDs are a bit pricier, but are specifically designed to be written with music. Finally, we’ll examine the Memorex CD-R. This is a high-end data CD, but they’re so well-designed that they also work well for music. Let’s take a closer look, and see how they all stack up!

Choosing the Correct CD’s for Music

Before we go any further, it’s important to understand a thing or two about how CDs work. In some ways, they’re similar to vinyl records, which record music in textured grooves. But records are analog, and CDs are digital. Instead of a textured groove, the CD stores data in a series of tiny blocks. Each block can either be on or off, corresponding to a one or a zero in the digital code. This data is stored in a reflective substrate inside the disc. When the laser in a CD player strikes the substrate, it reads the blocks in this substrate, and extracts the data. The outer plastic layers don’t actually store any data at all. They’re simply designed to ensure the central substrate doesn’t get damaged.

The main thing to look at in terms of quality is the substrate. Different materials will last for different amounts of time. Silver substrate will oxidize over time, and will fail in about 10 years. Gold substrate, on the other hand, can remain readable for as long as 100 years. Keep in mind that some manufacturers will dye their discs to make the substrate look like a higher quality. In other words, you can’t tell how good a disc is just by looking at it. Look instead for durability ratings and user reviews. 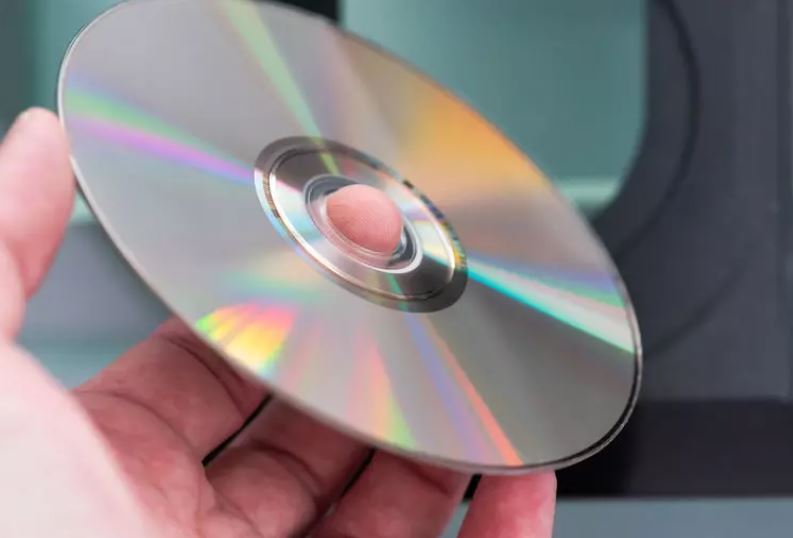 When you’re shopping for CDs, you’ll see different varieties. The two most common varieties are CD-R and CD-RW. CD-R is short for “Compact Disc Recordable,” and used to be called CD WO for “Compact Disc Write Once.” CD-R discs have been available since the 1980s, but only gained popularity in the mid-90s as costs went down. As the original name implies, CD-R discs can be written a single time. Once they’ve been “burned,” they can no longer be rewritten.

CD-RW stands for “Compact Disc Rewritable.” They’re similar to CD-R discs, but they can be rewritten more than one time. That said, many CD and DVD players struggle with CD-RW discs. As such, CD-RWs are best-suited for data backup, where you’ll be overwriting them regularly. CD-Rs, on the other hand, are best for music, since they’ll work in a wide variety of players. For this reason, all of our best music CD choices are of the CD-R variety.

Both CD-R and CD-RWs have capacities between 650 and 700MB. This is sufficient for between 74 and 80 minutes of audio. Most modern CDs have a 700MB capacity, but you’ll still see some 650MB discs floating around. Another thing to remember is that just as there are different types of discs, there are different types of drive. A CD-R drive can only write to CD-R discs, while a CD-RW drive can write to both CD-Rs and CD-RWs.

If you want a disc for data backup, rather than for music, Blu-Ray is your best choice. A Blu-Ray disc can hold between 25 and 50GB, depending on whether it’s single or dual-layer. At the high end, that’s more than 70 times the capacity of a CD-R or -RW disc. Get yourself a Blu-Ray writer, and you’re ready to start making backups.

Besides disc type and quality, the other main thing you’ll want to look at is the maximum write speed. CD writing speeds are measured in “x,” with 1x equivalent to normal playback speed. So for an 80-minute CD to write at 1x, it would take 80 minutes. Needless to say, this low speed wouldn’t be terribly practical. 4x would write the same disc in 20 minutes, and 16x write speed could get the job done in five. So the higher the maximum write speed of your discs, the faster they’ll burn. 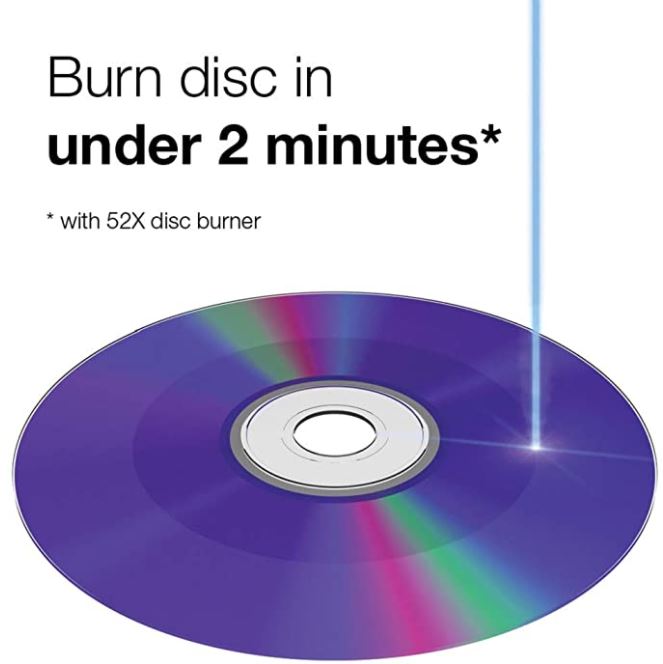 Keep in mind that your drive will also have a maximum write speed. So if you have a 52x disc and a 32x drive, it will max out at 32x. System resources can also limit your write speed. If you’ve got 15 windows open, chances are that you won’t be getting the fastest possible speeds. Read and write time also doesn’t include the time it takes to process and finalize the project. So even if you’re maxing out your write speed, expect it to take a minute more than what you’d calculate.

Even so, faster is always better, right? Not always. Faster writing can sometimes cause errors, especially on cheaper discs. The write process can seem to run just fine, only for the CD to start skipping halfway through playback. For this reason, most CD writing apps will allow you to choose your write speed. Unless you’re in a hurry, it’s better to write at 16x or slower. That said, if you have premium discs and a top-of-the-line drive, there’s no reason not to go faster. 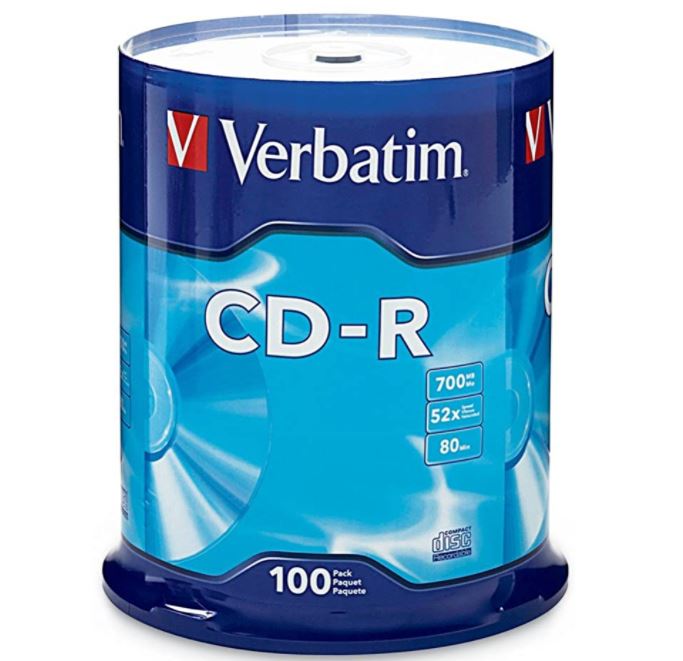 Verbatim is one of the biggest names in the world of storage, and for good reason. They’ve manufactured everything from Blu-Ray discs to old-school 5 ¼-inch floppy discs. And along the way, they’ve developed a reputation for quality.

The Verbatim CD-R is simple and straightforward, with a silver-grey surface that has lines drawn on it for track listings. The other side is a highly reflective silver-blue with enough shine for easy and reliable reading. They’re rated for a 100-year archival life, which means they might as well last forever. By the time they start to fail, your grandkids will be having music piped directly into their heads. 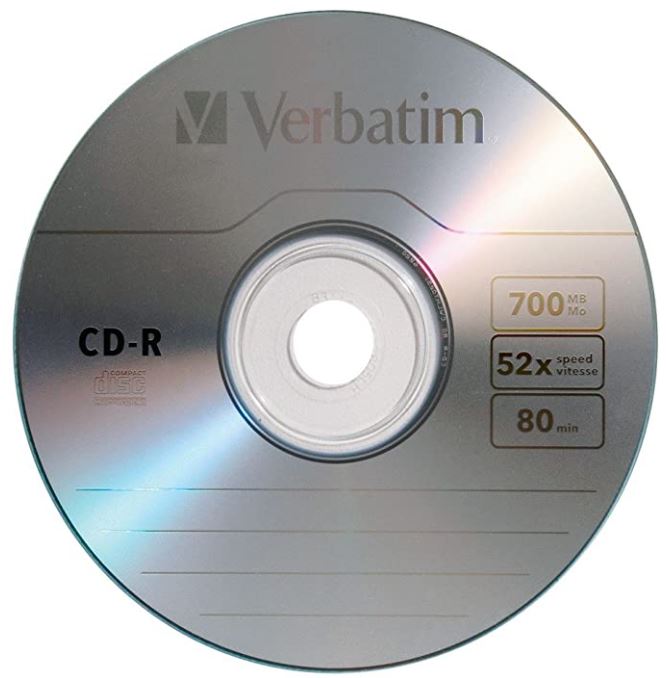 The capacity of these discs is 700MB, enough for 80 minutes of music. They’re rated for a maximum write speed of 52x, or 7.8MB/s. This means you can burn a full-length audio CD in about 90 seconds. Factor in time for processing and finalizing, and you’ve got a complete CD after 2 ½ minutes.

These are affordable CDs, and come in a 100-pack. This makes them ideal if you want to run off a bulk run of CDs at home. They’re also available in a 10-pack if you just want a few cheap discs. That said, the plastic itself measures only 1.1mm thick, not a standard 1.2mm. In a quality CD drive, this won’t be a problem. But it can cause skipping in cheaper drives, or in cars where you’re dealing with a lot of vibration. 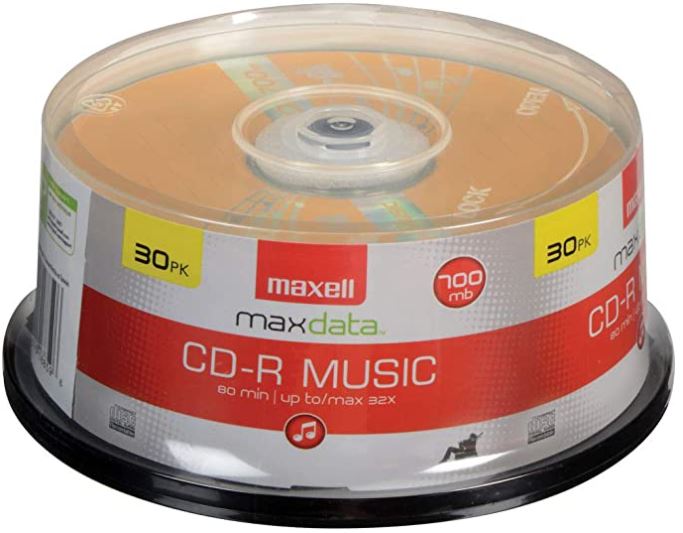 The Maxell High-Sensitivity CD’s are more about quality than quantity. The 30-pack costs nearly as much as the 100-pack of Verbatim CD-Rs. That said, as soon as you open the package, it becomes obvious where your money is going. These aren’t just any old CD-R discs. These are CD-R Music discs, specifically designed to ensure high-quality playback. They also offer better compatibility with older CD players, which don’t always support all CD-Rs. 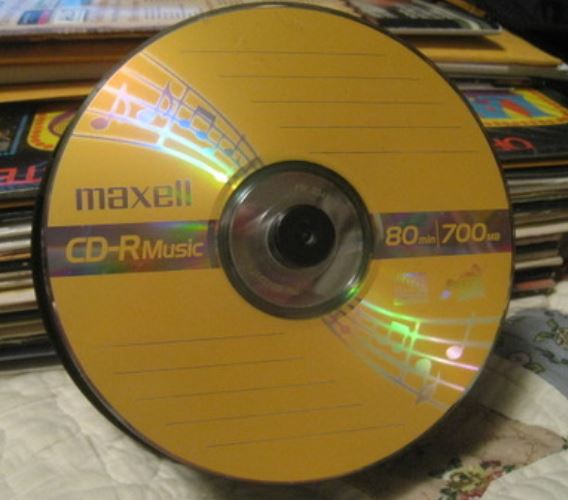 As part of this design, they write at a maximum of 32x. This allows for data writing rates of 4.8MB/s. For burning music, you can write 80 minutes in 2.5 minutes. So depending on your software, you’ll be able to complete an entire CD in about 3 ½ minutes. That’s a minute longer than the Verbatim discs, but it’s still reasonably fast. This slightly slower max write speed helps ensure better accuracy, so skipping is not a concern.

In terms of capacity, the Maxell CDs have 700MB of storage, enough for 80 minutes of music. They’re orange-gold in color, and the front is lined for writing, just like the Verbatim discs. The underside is also bright gold, and the foil is highly reflective. However, the dye doesn’t respond well to older CD writers. Generally, you’ll want a CD-R drive made in 2015 or later. In addition to the 30-pack, these discs are available in a 5, 10, or 50-pack. 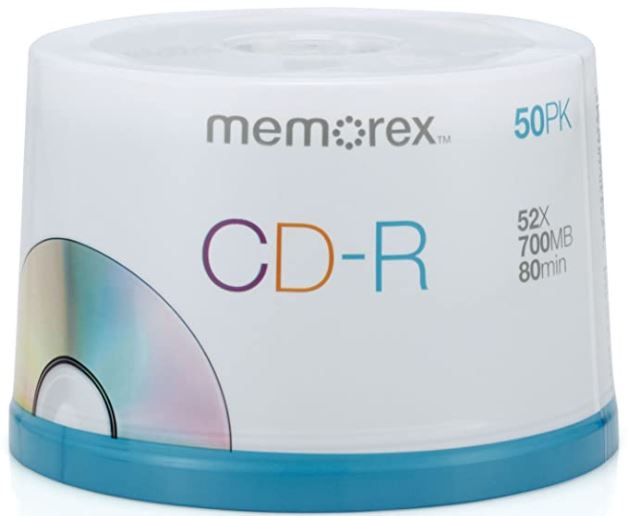 The Memorex CD-R is primarily designed for data. However, it’s designed as a high-quality archival disc that prevents errors. As such, it’s also ideally-suited for recording music. The capacity of 700MB is right in line with modern standards, enough for 80 minutes of music. The discs come in a 50-pack, but are available in 10, 100, and 110-packs as well. The 10-packs come in sets, presumably so smaller retailers can resell them individually. We’re honestly not sure why else you’d want to buy a set of five 10-packs instead of a single 50-pack. 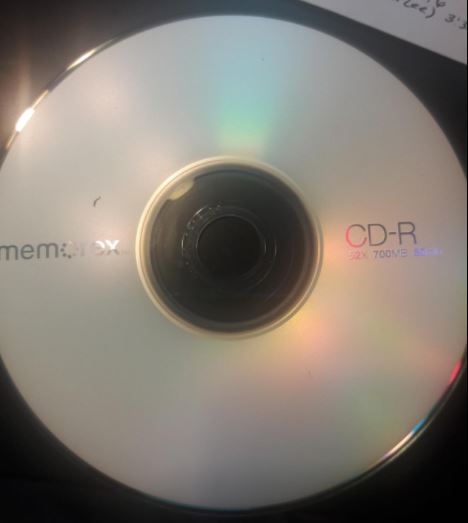 The tops of the discs have a writable surface, so you can write down track information. The underside is a reflective silver, so shiny it’s almost blinding. This high reflectivity is a big part of why the Memorex CD-Rs are so reliable. They also support write speeds of up to 52x. That’s on par with the Verbatim discs in terms of write speed, but with better quality. The downside is that these discs are a bit pricier, but you get what you pay for.

Which of these blank music CDs is the best will depend in large part on what you need. For instance, take the Verbatim CD-R. These are durable, long-lasting discs with a highly reflective surface. They also support a very high maximum write speed, and they come in an affordable 100-pack. That said, their affordability comes with a downside. They’re about 0.1mm thinner than most CDs, so they won’t work well in cheaper CD players.

The Maxell High-Sensitivity Recordable CD is a better choice for raw quality. The maximum write speed is slower, which can slow you down on bulk runs. However, the discs will perform much better when you’re playing back in older players. They’ll also be easier for cars to read. That said, you’ll need a relatively recent CD-R drive to be able to write to them.

Last but not least, we reviewed the Memorex CD-R. These are high-performance discs designed primarily for reliable data backup. That said, the same features that make them so good for backup also make them useful for music. For one thing, you get an exceptionally reflective writing surface that’s easy for any player to read. You also get a maximum write speed of 52x. That’s among the fastest speeds on the market, and allows you to churn out high-quality CDs at blazing speed.