In moderation, blue light is beautiful. In excess, it can lead to headaches, sleeping problems, and much more. That’s a bit of a problem because smartphones, tablets, PC monitors, and televisions all give off an enormous amount of blue light.

Doing so helps them generate truly bright whites in their color space, which looks great. But it also takes a toll on your eyes. Even if you don’t encounter some kind of sleeping issue, blue light is physically tougher to process.

Exposure to blue light can lead to headaches and eye fatigue, which is actually a large part of the reason why welders must protect their eyes when working with intense flames. It’s the blues that really get you.

Why blue? It’s all because of the sun. In nature, light from the sun contains more blue light in the morning, and less in the evening. Our brains are wired to expect less exposure to blue light during the end of the day. Blue light actually informs the brain whether or not you should be feeling tired, which is part of the reason why PC devices can contribute to sleeping issues. 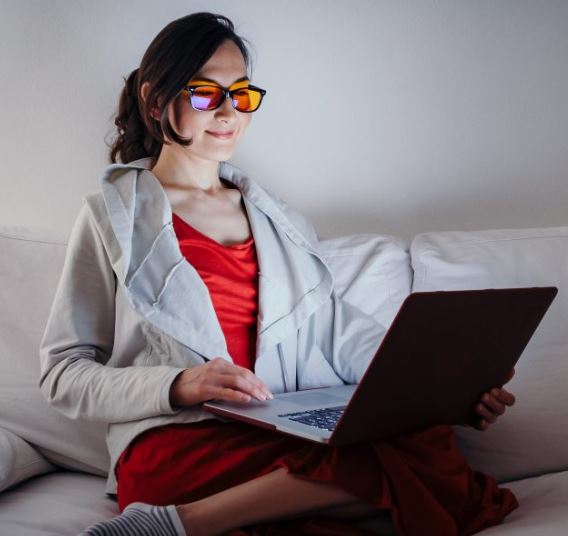 Blue light blocking glasses were made to help solve this problem. Whether you’re going places during the day, or you’re simply using your smartphone in the evening, a good pair can help protect your eyes from blue light. You might think picking the right pair of glasses can be tricky without actually being able to try them on, but people used to order glasses like this through magazines. It’s not tough if you can follow some common sense guidelines while choosing.

One thing to keep in mind is glasses and their lenses are typically measured in the metric system. More specifically, in millimeters. For people who aren’t used to using those metrics, things can be a little confusing.

But you don’t need to get involved with any lengthy research, you just have to keep baseline readings in mind while sorting through different pairs. For instance, the average pair of glasses will have lenses in the ballpark of 40mm. Once you have some baselines in mind, comparison becomes much easier. 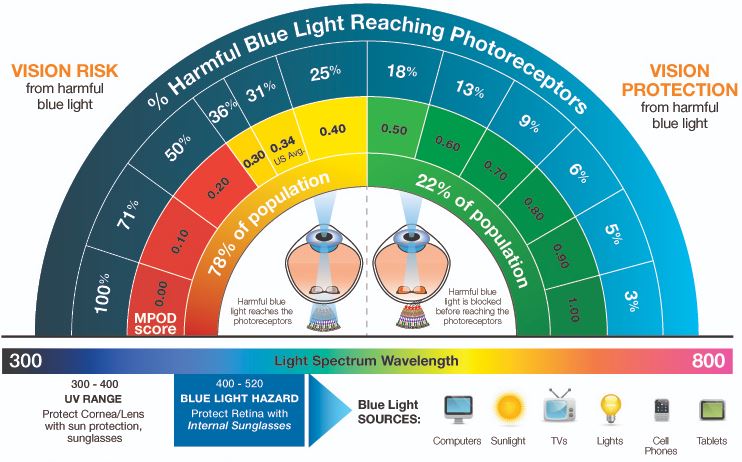 Thankfully, you really don’t have to get involved in thinking about different degrees of protection from blue light. One pair is really as good as another, unless you plan on going outside instead of simply looking at screens, at which point there might be some slight differences. And those differences are really entirely encapsulated in polarization, which actually brings us to issues of style.

Artists like Michelangelo described the face as a work of art. It’s been said that great art deserves a great frame. To that end, it’s also worth considering the aesthetics of the glasses. Understandably, some people won’t be very concerned about how the glasses look. Because for many people, these glasses will often be worn before bed, in your living room, or otherwise in the privacy of your own home.

Blue light blocking glasses tend to be made with a ubiquitous style that’s intended to look good on basically anyone’s face. If you’re into fashion, then you probably know different shapes and colors can complement a person’s face in different ways.

Black frames are fairly neutral, so they can work for essentially anyone, which is why they’re so terribly common. But for people adventuring outside of simple black frames, it’s reasonable to start asking whether or not the frames match your color palate.

Sometimes things that are built to be sturdy do not look very sturdy. That’s certainly the case when it comes to many different pairs of glasses. After all, how sturdy can some glass attached to some plastic really be? As it turns out, when you’ve got the materials, quite sturdy indeed.

You typically want polycarbonate lenses. The best frames are usually made from something similar to TR90, which is a special type of flexible thermoplastic. Though people usually see plastic and think “cheap”, plastics can also be made amazingly lightweight, sturdy, and safe. Which is why they’re used in some of the best pairs of glasses in the world.

The Cyxus Blue Light Filter Computer Glasses are constructed by Cyxus Technology Group, who have been making glasses for about a decade. Eyewear can be a tough niche to break into, the fact they’ve survived actually says a lot about the brand.

Notably, these glasses use what’s called HEV-Absorb Technology that’s intended to absorb blue light directly, and thus prevent it from hitting the lens of your eye. The result is great protection from eyestrain and UV exposure, which can prevent headaches and ease sleep issues with scientific certainty. 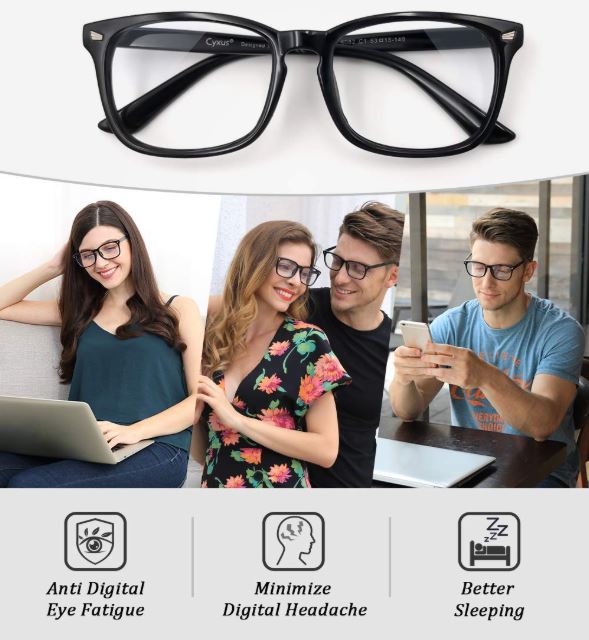 Aesthetics can be an important consideration when choosing a pair of glasses. Of course, they’re also terribly subjective. Most people seem to find the Cyxus Blue Light Filter Computer Glasses attractive in their simplicity.

The lenses themselves are polycarbonate, which is ready to survive impacts and resist scratching. Quite similar to the materials you’ll find built into medical eyeglasses. In other words, they’re made to last. Their front measures 53mm, with the lens totaling 43mm of that distance, and the rim composing the rest. Their bridge is 15mm, each arm is 140mm, and the total length of the frame is 141mm. Pretty smooth and symmetrical. 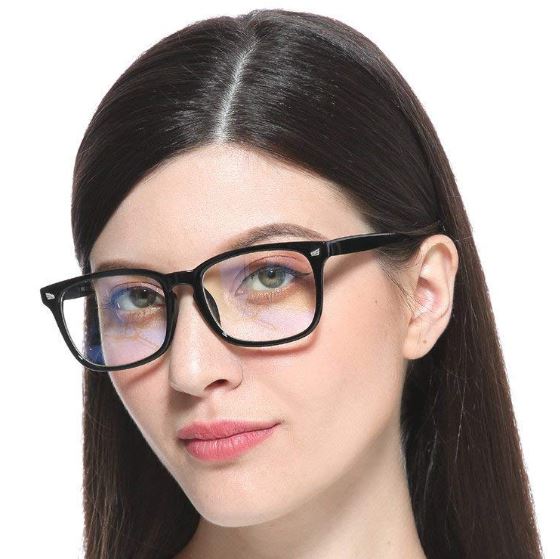 Apart from their thin frame, their look is partially defined by your color selection. There’s a total of six colors you can choose between. That might be an exaggeration because four of the six colors are actually some variant of black. You can find glossy black, matte black, and others. Fans of black will be overjoyed with their options. There is also pink and crystal, though the crystal looks more like a translucent white.

Cyxus includes a lifetime warranty on their glasses. That warranty basically just means they believe the hinge will never wear out, but it’s nice to be protected.

Anrri Blue Light Blocking Glasses look shockingly similar to the Cyxus Blue Light Computer Glasses. It seems likely both frames were manufactured by the same producer. Anrri claims to be able to help cut through about 90% of all blue light, and consequently help protect your vision from fatigue. But you don’t have to get lost in the numbers, what matters is these glasses get the job done. 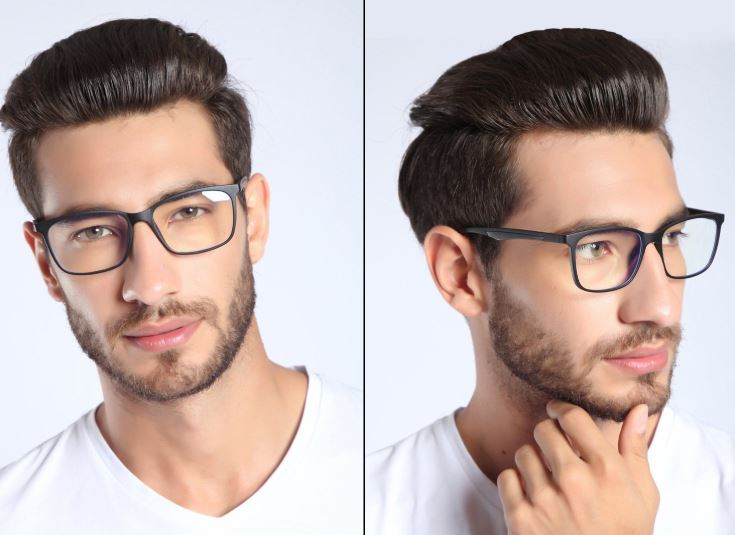 Its arms are gray. The front side of the frames are a darker gray, and the inside of the frames are blue. All in all, a strange mish-mash of colors which certainly has its own style. Consequently, some people will love it and others won’t. For people who don’t care to make a fashion statement with their glasses, or people who know blue isn’t in their color palate, there’s always black. 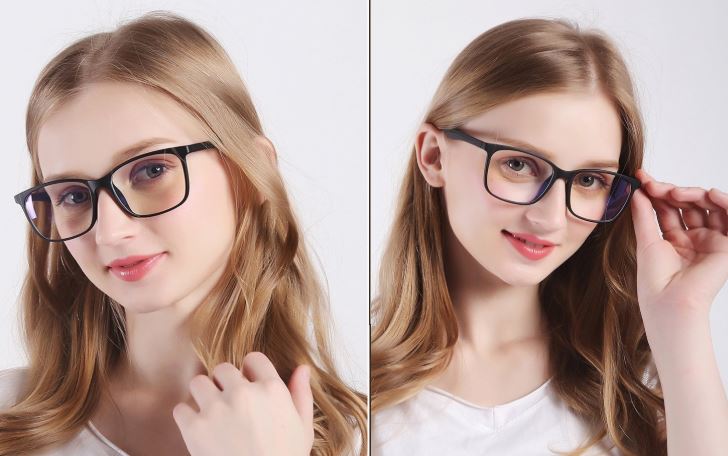 Turning to the dimensions of the glasses, they have a 140mm frame paired with slightly elongated 152mm arms. The lenses are polycarbonate, which is a fantastic choice for matching with the sturdiness of these frames. And their frame is TR90, created using a Swiss technology. It’s a special thermoplastic that’s amazingly lightweight, flexible, and still very durable.

Because TR90 is flexible, these glasses are also able to help contour against your face. With respect to durability, that flexibility helps a great deal. If you drop them from a short distance, they basically bounce because the material is good at absorbing and releasing energy. That’s probably part of the reason why Anrri includes a lifetime warranty on their Blue Light Blocking Glasses.

If you didn’t look closely, these GAMMA RAY 003 glasses would look like simple plastic… and not unlike a pair of glasses you’d pickup at a local gas station. But they’re actually composed of pretty unique materials made rather specifically for the purpose of protecting eyes from working under fluorescent lighting or staring into a television screen. It’s not the kind of protection you’d want to protect your eyes from the sun, however.

Physically speaking, the RAY 003 are nearly identical to the Anrri Blue Light Blocking Glasses. The ultra-lightweight design of the TR90 nylon frame is nigh perfect for these types of glasses. Each arm reaches to 140mm, which is part of a broader design to make these glasses sized for the average person. 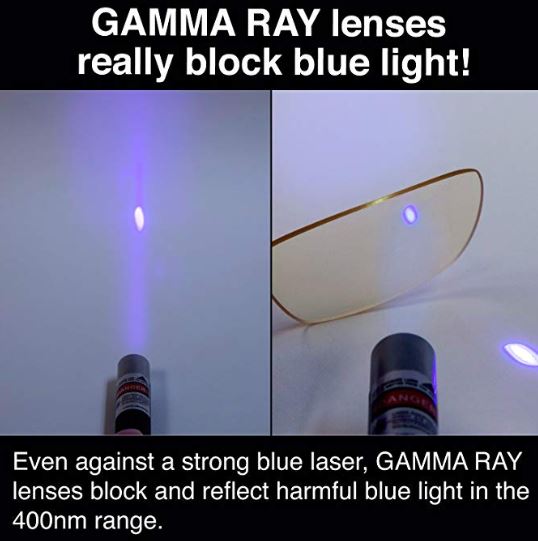 But one key difference is their lenses are slightly shorter than the other glasses on this list, measuring only 39mm. The difference is partially stylistic. But it also means that blue is only being stripped from the center of your vision, and not really your peripheral vision. It’s pretty clear that these glasses were intended to be used with digital screens.

One more thing that makes these glasses stand out is that you can choose between different magnification settings, ranging from 1x to 2.5x. Though you can’t choose between several styles of the GAMMA RAY 003, that’s really forgivable given the generally muted and neutral design of these glasses.

If magnification is something you’re interested in, the move from 1x to 2.5x doesn’t seem like much, but you can make that journey over five different steps. Which is a great deal of control, for people who know exactly how much magnification they need. 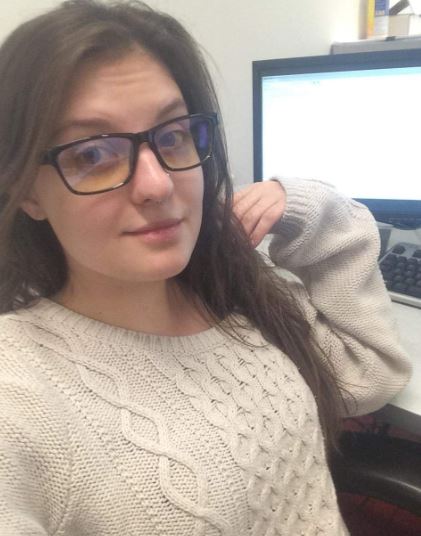 Because these glasses are non-polarized, they won’t greatly interfere with your perception of color. Even though their casual black frame is highlighted by the slightly yellow-tilted lens, the yellow tint doesn’t really dominate your perception. The yellow-like lens is something you can easily adjust to without noticing.

If you stare directly at the screen of a laptop, you’ll be able to tell it looks different because of all the blues being stripped. When you’re not looking at objects that are rich in blues, it’s practically invisible. It would only become completely invisible with the right pair of PC gaming glasses.

Picking Between 3 of the Best Blue Light Blocking Glasses

The Cyxus Blue Light Filter Computer Glasses are almost the dictionary definition of a solid pair of blue light blocking glasses. The frames are unisex and generally inoffensive to the eye. The quality of their construction is everything you would expect from a pair of prescription glasses. And being able to choose between pink, crystal, and several differ net shades of black means you’ve got plenty of style options. With all the blue light protection you need taken care of, that makes the Cyxus Blue Light Filter Computer Glasses a good choice for someone who falls in love with one of those styles.

The ANRRI Blue Light Blocking Glasses are probably the right choice for someone who falls in love with the blue-colored frames. From a functional standpoint, these glasses are almost identical to the Cyxus Blue Light Computer Glasses. They’re every bit as good for dealing with blue light from computer screens, and they’re even made from the same high quality parts. For people who think blue compliments them, the blue version of these frames can be a great choice.

The GAMMA RAY 003 Anti Blue Light Computer Glasses have two things that help distinguish them. The first thing is the slightly slimmer 41mm frames. They don’t take up as much space on a person’s face, and have consequently are slightly worse at blocking light while outdoors. The other thing that distinguishes these glasses is being able to select between different magnification settings. That makes the RAY 003 glasses the right choice for someone who’s trying to read with their glasses.