Now that the weather’s getting colder, a good hat is becoming a necessity. And there are few hats better for cold weather than the humble beanie. A well-insulated beanie comfortably wraps around the top of your head, and covers the tips of your ears. Not only that, but the design is clean and fashionable. You won’t have to feel like you look goofy because you’re wearing some hat with big ear flaps. Instead, you’ll have something that compliments just about any outfit.

If you need something even warmer, you might be tempted to get a bulkier hat. But then you end up with multiple hats for multiple temperature conditions. What if you want one hat, which is suitable for fall, winter, and spring?

In that case, a heated beanie might be the right fit for you. These beanies use internal batteries and electric coils, similar to the coils in an electric blanket. When you turn them on, the coils warm up, and so does the hat. This can keep you comfortable even in the worst winter weather. Best of all, you can turn the coils off when the weather warms up again. This means the beanie will be comfortable whether it’s very cold outside, or whether there’s just a little chill.

But a beanie isn’t just utilitarian. It’s also a piece of fashion. To find the right choice, you don’t just want to look for the warmest, or even most versatile hat. You also need to find one that fits your personal sense of style. This makes beanies different than most contemporary gadgets, where aesthetics typically aren’t important. Here, the appearance is every bit as important as the performance.

With that in mind, we’re going to review three of today’s best rechargeable electric heated beanies. To start out, we’ll look at the Autocastle Rechargeable Electric Heated Beanie. This is a comfortable knit acrylic hat with three settings and different weave patterns. Next, we’ll examine the Svpro Battery Heated Beanie. This is another acrylic knit hat, which is similar in many respects, but comes in different color options. Last, we’ll check out the Snow Deer Heated Hat. This is a more laid back grey polyester hat with slick indicator light on the front. Which one is going to be right for you? To find out, we’ll have to take a much closer look at all three of these beanies. Only then will we be ready to give a firm opinion. Let’s get started! 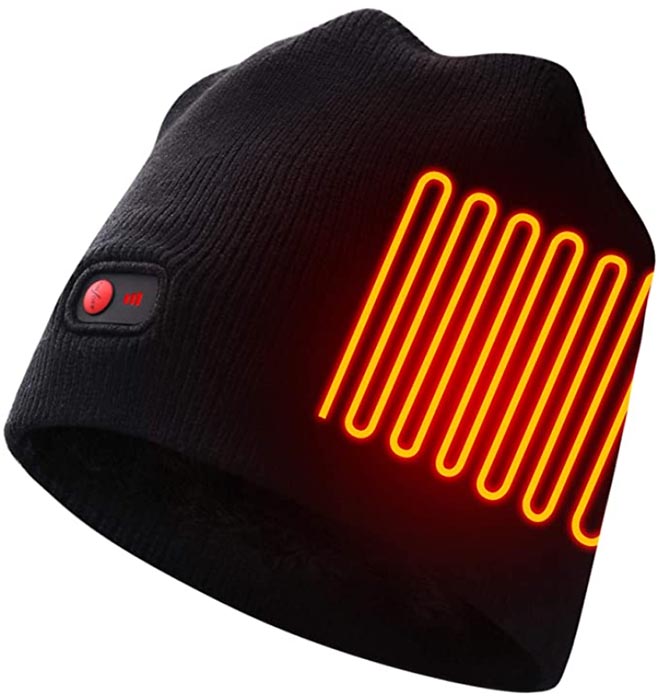 The Autocastle Rechargeable Electric Heated Beanie is knitted from a soft, comfortable acrylic. This material is reasonably flexible, and flexes over most heads. That said, it’s not very stretchy. There’s a looseness to the weave, so you get a tad of flex. But it’s not meant to hug your forehead and ears like a hat with an elastic band. There are three different variants available. The first is a plain black with narrow vertical ridges. The second is the same black, but with a broader, more textured pattern. The third has an identical broad, textured pattern, but it’s a pale grey instead of black. 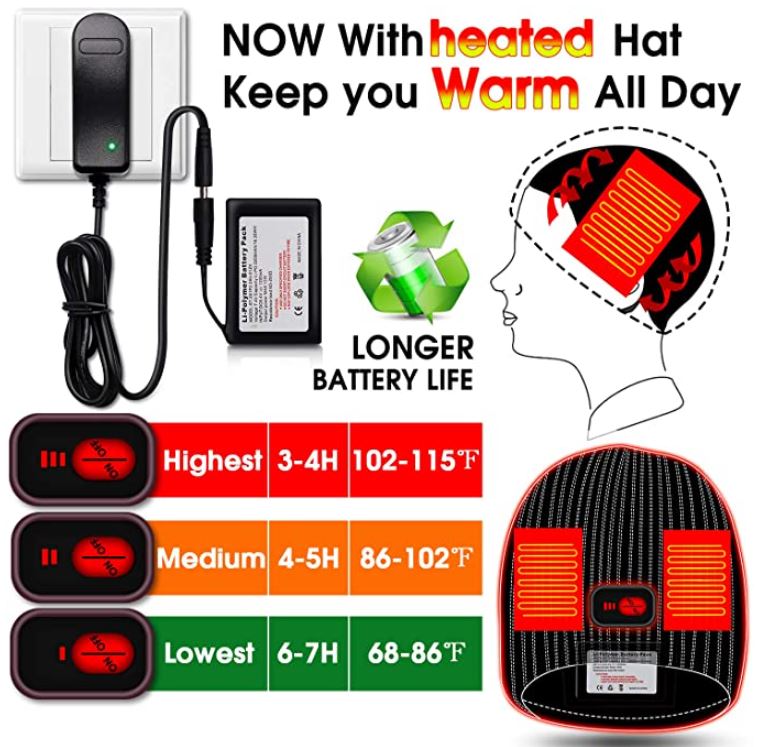 The inner liner is made from a soft acrylic plush material. It feels almost like fur, so it’s very comfortable on your head. This liner is also very cozy, like a warm blanket or a fluffy pillow. That said, keep in mind that there are wire coils between the outer shell and the inner liner. These coils can potentially get damaged by rough handling. As a result, the Autocastle beanie isn’t machine-washable. You’ll have to wash it by hand, preferably as gently as possible. Then again, it’s a hat. It’s not like a shirt, which you wash every time you wear it. So for something you have to do a few times a year, hand washing isn’t that bad.

On the front of the hat – or wherever you want it to point – there’s a control button with a power level indicator. This is a small black rubber oval, with an orange button built into it. To the right of the button, there are three vertical bars, which will light up in order as you change the power setting. The battery itself is a compact rectangle, about the size of a smartphone battery. It has a short pigtail sticking out of it, which connects to a plug inside the beanie. When you’re wearing it, the battery tucks out of sight into a little pocket in the inner liner. 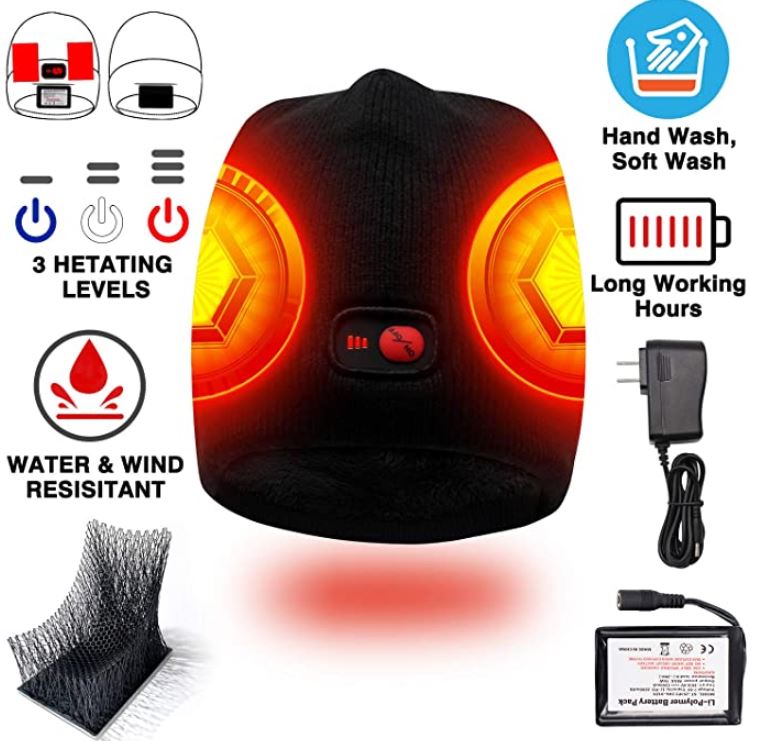 When it comes time to charge the battery, you use an external AC charger. Simply unplug the battery from the beanie, plug it into the charger, and plug your charger into the wall. The charger looks like an old-school cell phone charger. There’s a rectangular block with power prongs, with a thin wire coming out of it. This wire is tipped with a barrel-style plug, which connects right to the battery. There’s also an indicator LED on the front of the charger. It turns red when the battery is actively charging, then switches to green when you have a full charge. 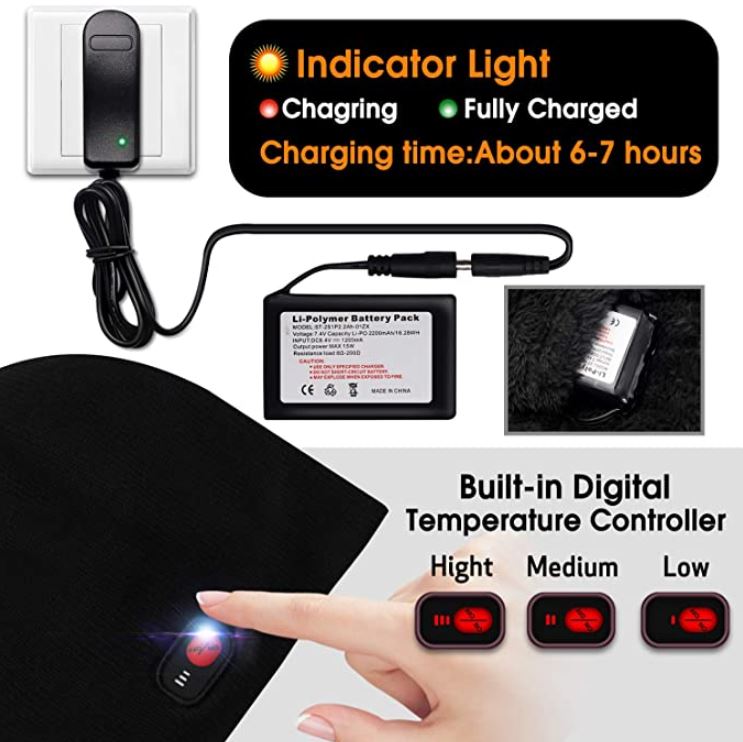 Controlling the heater function is very simple. You press the button once to turn the beanie to the lowest power level. Pressing the button a second time will turn the warmth up to medium. Pressing it again will put you at maximum power, for braving the iciest winter days. Pressing the button a fourth time will turn the beanie off again. There are no other controls or settings, so it’s as easy as it gets. Not only that, but the button is easy to operate when you’re wearing gloves. This is a key feature for any cold weather gear, and we’re glad Autocastle incorporated it.

The 2200mAh battery is a Lithium-Polymer variety, which means it can withstand many charge cycles. It’s also safer than older battery technology. At the highest setting, it will power the beanie for a little over three hours. On the medium setting, you’ll get around 4 ½ hours of battery life. On the highest setting, you can expect the beanie to last for as long as seven hours. All in all, this isn’t bad, especially given the small size of the battery. The battery is also easy to charge. When fully drained, it will charge to 100 percent in less than two hours. So even when you’re out of juice, you can get back into action very quickly. 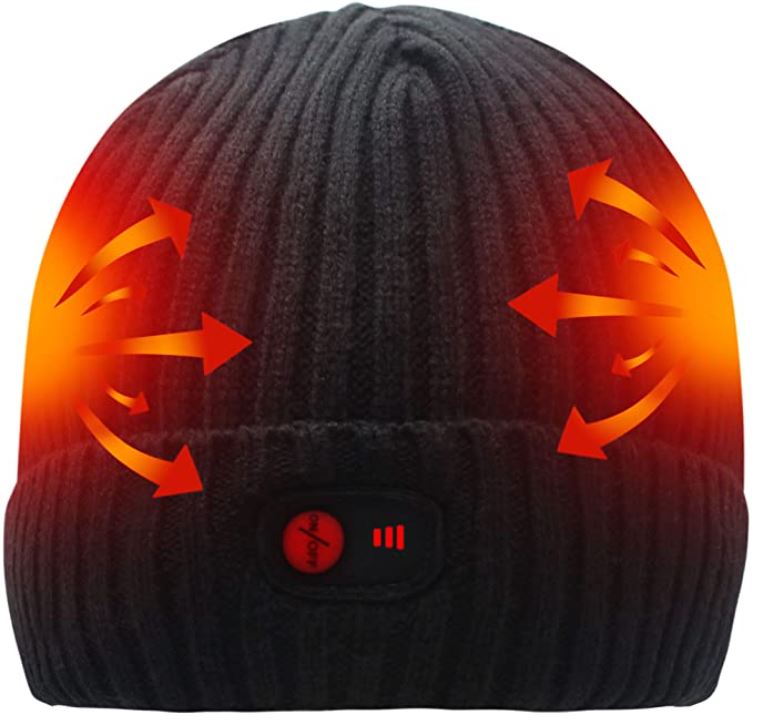 Not to put too fine a point on it, but the Svpro Battery Heated Beanie is a clone of the Autocastle. It has the same material, liner and weave. It even uses an identical battery, charger and control surface. The three vertical bars are present, as is the easy-to-operate orange button. The one notable difference is that there’s a wine red option with a thick, twisted pattern. This gives you more color than the Autocastle beanie.

Of course, no beanie can meet all your outdoor needs. For camping, visibility can often be a bigger concern than warmth. If that’s what you need, check out our review of the best beanies with built-in headlamps. 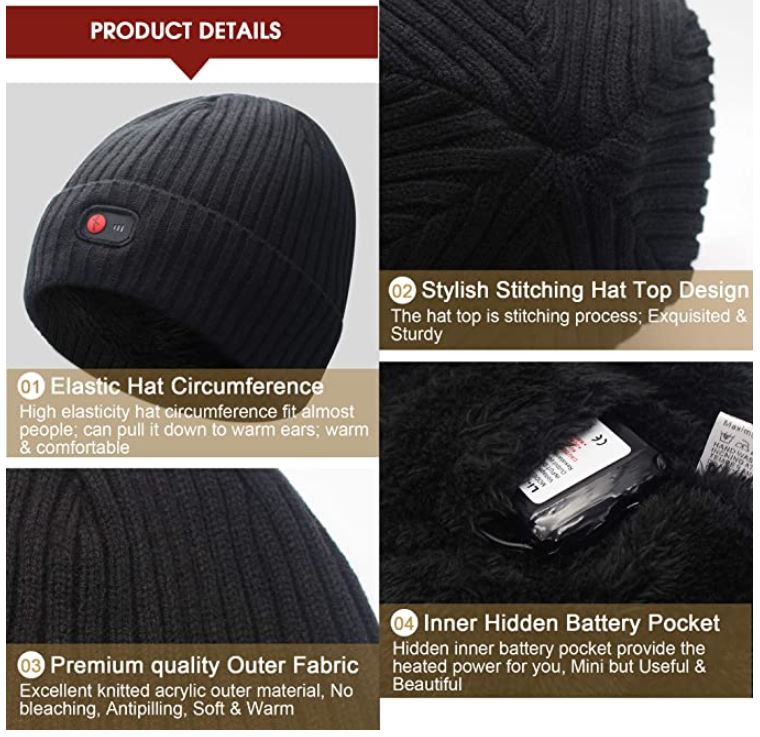 The Svpro Battery Heated Beanie works identically to the Autocastle beanie. There are three levels of heating, which you use the button to cycle through. The battery lasts between three and seven hours, depending on your setting. And when it’s time to charge, you get a full charge in about two hours. All in all, you’re looking at solid performance under most weather conditions. 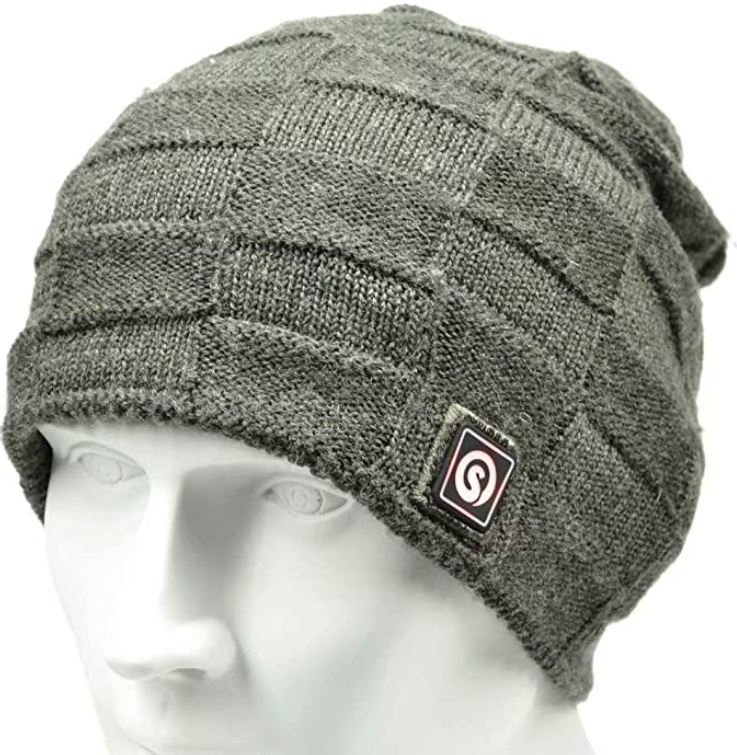 The Snow Deer Heated Hat is a different design altogether. Instead of polyester, it’s made of a polyester shell and inner liner, with elastane woven into the bottom portion. This makes it very flexible, without sacrificing much in the way of comfort. Thanks in large part to the dense weave of the inner lining, it feels even softer than fleece. That said, keep in mind that just like the last two hats, it’s hand wash only. 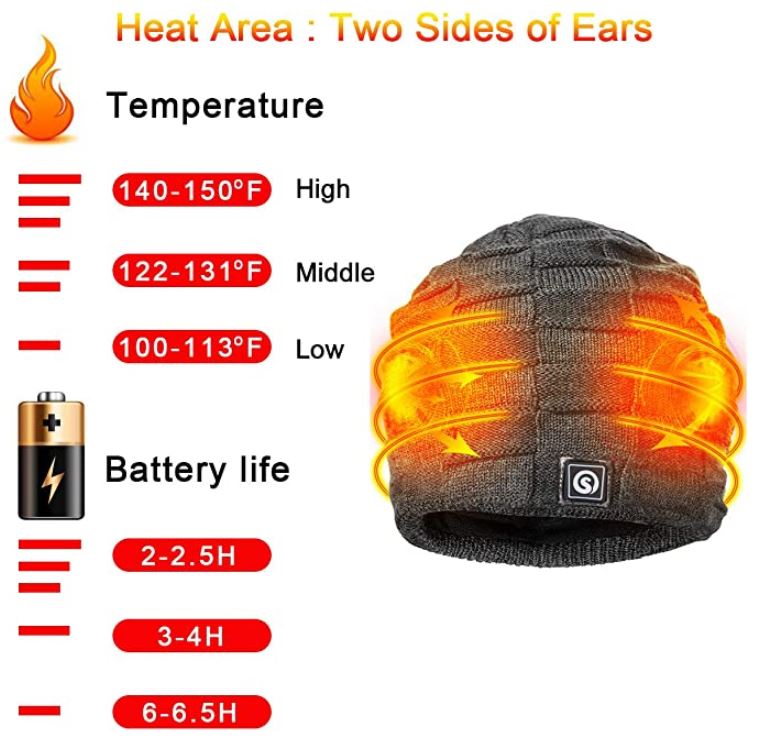 There are two variants available. The first is a rectangular pattern, with wide, textured rectangles in an all-grey color. The other is a smooth design, with multiple shades of grey spelling out the words “snow deer.” There’s also a control button on the front, which changes color when you change the heat setting. It’s blue on the lowest setting, white on medium, and red on high.

Just like the other hats, it has a removable battery and a separate AC charger. The battery has a different build, though, with the pigtail permanently joined to the side. The charger also has a broader design, although it still has a reed and green indicator light. 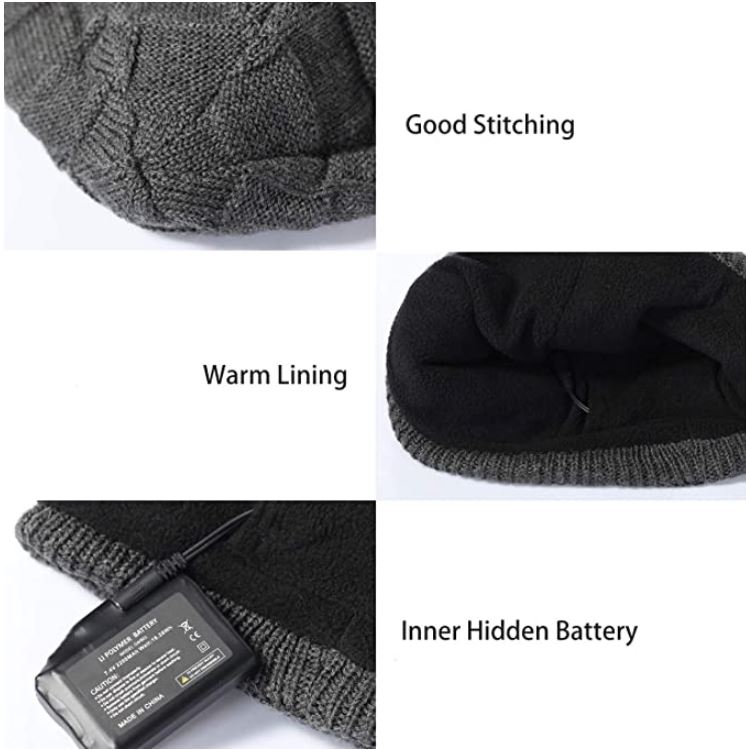 The Snow Deer’s battery has the same 2,200mAh charge as the last two hats. However, it draws voltage differently, so you get a warmer hat for less time. On the maximum setting, it can last as little as two hours. On medium, around 3 ½ hours is the norm. On the lowest setting, you can stretch it to 6 ½ hours. That’s not bad by any means, but it’s noticeably shorter than the Autocastle or the Svpro. Charging time is identical, at about two hours for a full charge.

But why not expand your selection with even more beanies? Bluetooth earbud beanies won’t keep you any warmer, but they’re a great way to enjoy your favorite tunes.

As you can see, each of these hats has its own benefits and drawbacks. We first looked at the Autocastle Rechargeable Electric Heated Beanie. This beanie has a long-lasting battery, and a comfortable, cozy design. It’s available in black as well as grey, and the control is easy to operate. The only real downside is that it’s not as flexible as many stretchier hats.

Second, we looked at the Svpro Battery Heated Beanie. In most respects, this is a clone of the Autocastle beanie. It’s made from the same material, and uses the same battery, control interface, and charger. However, the wine red variant is an attractive option if you’re going for a less monochrome look.

The Snow Deer Heated Hat has two entirely different looks altogether depending on which one you order. However, both share the same basic features, including a powerful heating element. They’re also stretchy, so they can fit a wider variety of heads. On the downside, the battery doesn’t last as quite a long, which could be a downer on longer outings.

Guide to the Best Animatronic Halloween Decorations for …
September 23, 2022