These days, we’re constantly surrounded by electromagnetic radiation. Whether it’s smartphones, WiFi networks, or other forms of data transmission, there’s a lot of EMF radiation out there. This wasn’t the case as little as 30 years ago, before smartphones gained widespread popularity. As a result, some people are concerned about the effects of radiation in their lives. This can be for many reasons. Some people experience symptoms of anxiety or even physical pain when exposed to a lot of EMF. Others are simply worried that there may be as-yet undiscovered health risks from EMF radiation.

We should point out that this type of radiation seems to be harmless. It’s non-ionizing, like radio waves, which means it won’t damage your DNA and cause cancer. This is different from ionizing radiation, such as X-rays and microwaves, which can do serious damage. That said, if you’re still concerned, there are ways to block EMF radiation. One possible method is to use a thick layer of lead, like they do when you get an X-ray at the hospital. But that’s not practical to wear, carry, or hang around your bed. Another, more practical option is to hang an anti-EMF canopy around your bed. These canopies are made of Faraday fabric, and are meant to block electromagnetic radiation.

Today, we’ll be reviewing three of the best EMF-shielding bed canopies available on the market. We’ll begin with the UrGarding Silver Coated Mesh Radiation Protection Canopy. This is a box style canopy that hangs from your walls or ceiling. Next, we’ll look at the aptly-named Blocsilver. This is another box style canopy, but it’s supported by a frame instead of hanging from your walls. Finally, we’ll examine the GLFZWJ 100% Silver Fiber EMF Shielding Bed Canopy. This canopy can either be a frame style, or supported from a single point in the ceiling. But which one is going to be the best choice for you? Let’s dig a little deeper, and find out!

How Do EMF Bed Canopies Work?

So, how does an EMF bed canopy work to begin with? As we mentioned, these canopies are constructed from Faraday fabric, which is based on the idea of a Faraday cage. Faraday cages were invented in the 19th century, and were designed to protect people from electric shock. But electricity is closely related to EMF radiation. As it turns out, the same technology that can be used to block electricity can also stop radiation. This includes X-rays, ultraviolet light, microwaves, radio waves, and more. The frequency of waves that are blocked will depend on the design of the cage. 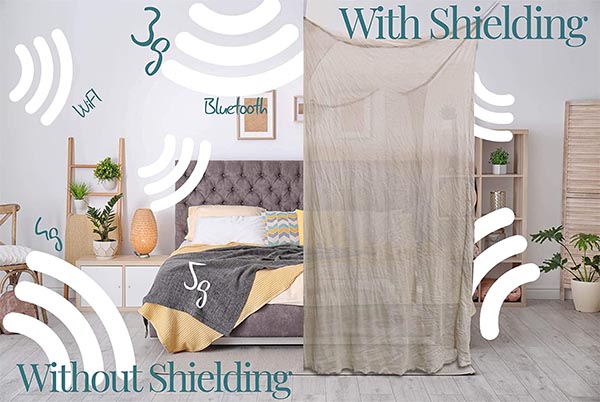 Large, rigid Faraday cages are still in use today. One good example is a vehicle frame. Car frames function as Faraday cages, so they can channel lightning to the ground in the event of a strike. Otherwise, any lightning strike to a vehicle would also end up going through the driver. Military and telecommunications facilities are also frequently engineered as giant Faraday cages. This is due to the need for security, and to protect their sensitive equipment.

Faraday cages work by diverting electricity around whatever is inside. This creates a charged outer shell, with an electrically neutral interior. Depending on the density of the cage material, different types of radiation can be repelled by this imbalance. Faraday cages – and, by extension, Faraday cloth – also provide this same effect without a charge. That’s because the ambient static charge in the air will be enough to create an imbalance.

That said, keep in mind that this effect will only work if the cage or cloth fully surrounds an object. Yes, any amount of shielding is going to be better than nothing. But if you’re not fully surrounded, you won’t get full protection. This applies also to your bed canopy. The bottom is open, so you’ll always be admitting at list a little bit of EMF radiation. With Faraday cloth in particular, it can also be hard to strike a balance between stiffness and effectiveness. The more metal in a material, the better it will work. However, if you add too much metal, the cloth is no longer easily flexible.

There are any number of technological solutions to EMF radiation. However, most of them rely on Faraday technology. For example, there are pre-manufactured anti-EMF blocking patches for your smartphone. There are also pouches, shields, and even router enclosures. 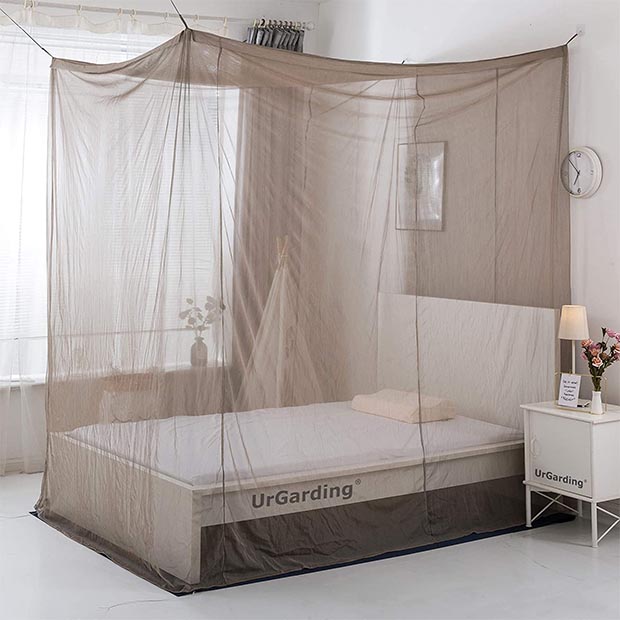 The UrGarding Silver Coated Mesh Radiation Protection Canopy is a box-shaped canopy that encloses your entire bed. The color is a beautiful silvery copper, although it’s sheer enough that anyone can see through it. At each of the four top corners, there’s an adjustable hanging line. These lines are meant to attach to a set of sticky hangers, which attach to your walls or ceiling. The nice thing about sticky hooks, instead of screw-in hooks, is that they’re safe for use in rentals. On the other hand, if you want an even stronger attachment, you can always buy screw-in hooks of your own.

This canopy is available in three different sizes: single, queen, and king. If you want a twin set, you can order two singles, and that will work the same way. That said, there’s no double bed option, which is disappointing, since a double is a popular size. There’s also no California king, although that’s less disappointing. For one thing, it’s an uncommon size. For another thing, it’s so large that it might be hard to hang on sticky hooks. 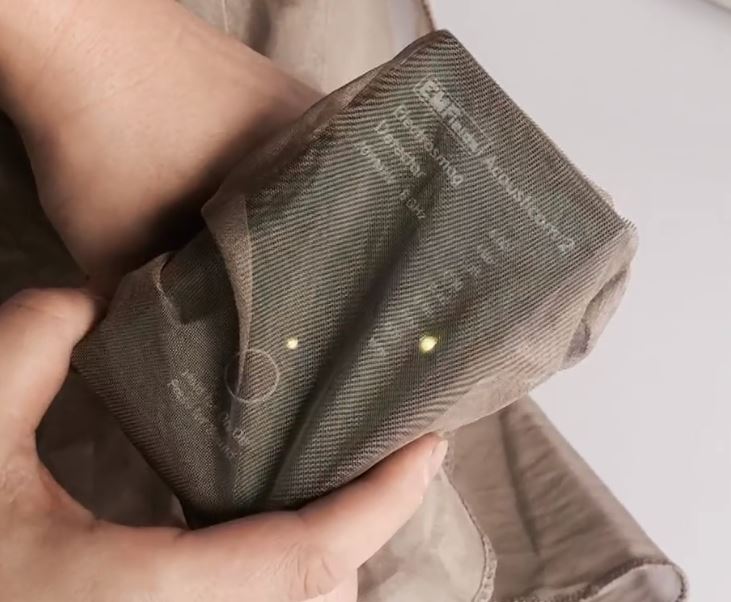 The UrGarding canopy is moderately effective. What this means is that it will reduce your cell signal noticeably, but not entirely. The same goes for your WiFi signal. If you normally get a full signal, expect it to drop to around half. And if you normally pick up your neighbor’s WiFi, you likely won’t see it anymore. All in all, it’s about what we expected from a single layer of mesh.

If you want a more precise method of measuring EMF reduction, you’ll need an EMF meter. These devices are designed to display the exact amount of radiation they’re exposed to. 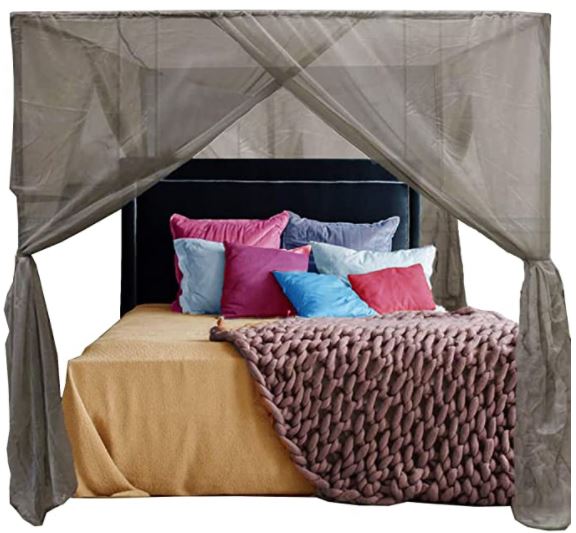 The Blocsilver represents a fusion of EMF protection and style. Instead of simply enclosing your bed, it’s designed to be as beautiful as possible. This is another box-shaped canopy, but instead of hanging from your walls, it hangs from a frame. This is a durable, rugged metal frame, and it’s virtually impossible to knock over. You’ll also notice that the material overlaps a bit on all four sides. This allows you to pull it back and tie it up with four ties on the frame. At the top center of each side, there will still be an overlap. The result is an effect that looks much like a set of curtains. In other words, your bed looks like a lush four-poster from a bygone era. Of course, there’s also a panel of mesh fabric over the top, to keep you covered from that direction. 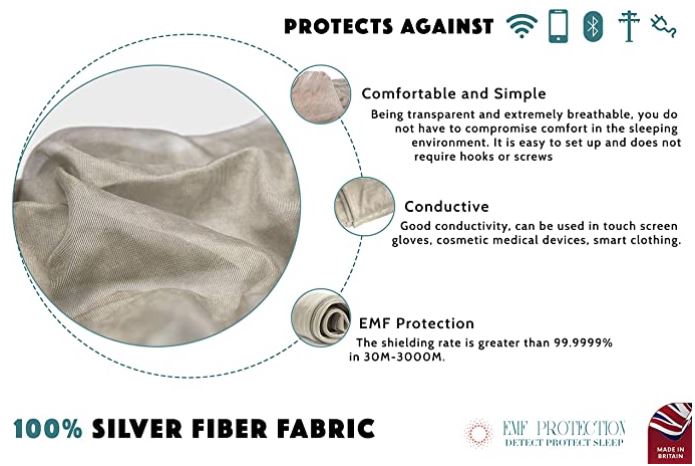 The Blocsilver is available in just about any size. It comes in twin, twin XL, double, queen, king, and California king. Most of the sizes are well-engineered to fit a variety of beds. That said, the double bed version will struggle to fit over doubles with large frames. If your double bed frame is on the beefy size, you’ll do better with the queen sized version. Performance is roughly the same as the UrGarding canopy. It’s not perfect, but it’s very effective for a mesh screen. The only major downside is the price; the Blocsilver costs much more than our other options. 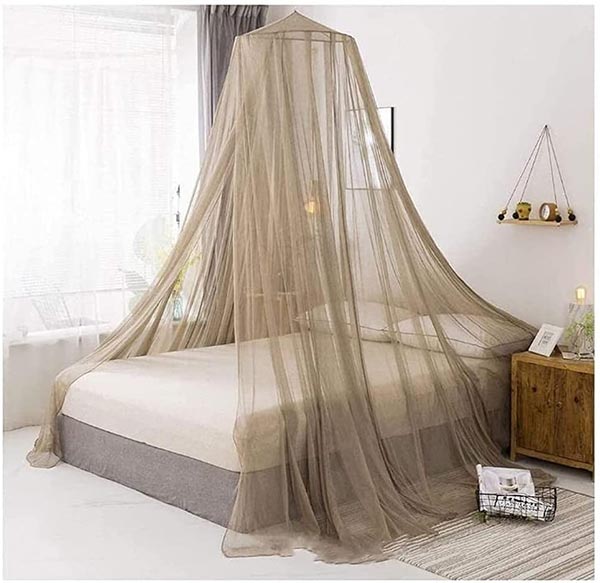 Of today’s three options, the GLFZWJ 100% Silver Fiber EMF Shielding Bed Canopy is probably the most unique. There are two different variants: the box and the “dome.” The box is similar to the Blocsilver, albeit not as heavy duty. The frame is noticeably lighter, there are no tiedowns, and the material doesn’t overlap in the center. Then again, you don’t pay nearly as much for the GLFZWJ. The box style is available in a single and king size only. 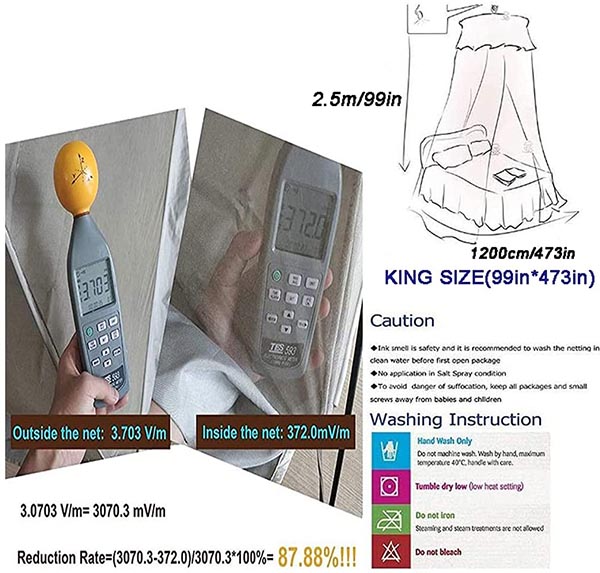 That said, the dome style is what makes this canopy stand out. This style hangs from a single point on your ceiling, and drapes down over the sides of your bed. This gives the canopy a bell-shaped profile, rather than a boring rectangle. Then again, it also slightly crowds the area within a few inches of the edge of the bed. This style is available in single and double bed sizes. The GLFZWJ was also reasonably effective, and we had no complaints about its performance.

As you can see, these three canopies all perform about the same. None of them creates a perfect barrier, but all of them are moderately effective. Provided they’re hung and installed properly, without any gaps, there’s not much difference. As a result, the main difference will be a matter of style, size, and affordability.

The UrGarding Silver Coated Mesh Radiation Protection Canopy is the easiest of the bunch to install. Because it uses adhesive, it sets up in minutes, and it’s suitable for renters as well as homeowners. That said, it’s not as sturdy as a frame setup, and it’s easy to end up with a gap on one side. Not only that, but this canopy isn’t available for double beds.

The Blocsilver is available to fit just about any sized bed. Not only that, but it’s very sturdy, with a framed design. And when it’s not in use, it ties up neatly at the corners, which is a nice aesthetic touch. On the downside, the Blocsilver is very expensive, about three times as much as our other options.

The GLFZWJ 100% Silver Fiber EMF Shielding Bed Canopy is quirky, in that it comes in two styles. For single and king beds, it’s a great box style alternative to the Blocsilver. While it might not be as durable, it’s significantly more affordable. For single or double beds, the center-hung design drapes over your bed, creating gentle curves. Choose a style and size that fit your tastes, and you really can’t go wrong.