For most people, PC sound is nothing more than an afterthought. You plug in your speakers or headphones, and sound comes out. Why complicate things any more than they need to be? The answer is that dedicated sound cards still have their place in today’s PC marketplace. For instance, suppose you’re trying to squeeze every last cycle out of your processor. In that case, running the sound through a dedicated sound card can help maximize your performance. But not all sound cards are equally worth owning. Some are actually worse than your on-board sound.

Today, we’ll be looking at three internal PCIe sound cards that stand out from the pack. First, we’ll be reviewing the EVGA Nu Audio Pro 7.1. This sound card has a built-in amplifier with a bass boost that offers plenty of extra thump. Next, we’ll check out the Creative Sound BlasterX AE-5 Pure Edition. This sound card offers the most bit depth, with 32 bits at 384kHz. Finally, we’ll look at the EVGA Nu Audio Card. This is a slimmed down version of the Nu Audio Pro 7.1, with no amplifier and a smaller price tag. Once we’ve looked at each of these sound cards, we’ll be ready to render a final verdict. Let’s begin!

What Do Sound Cards Do?

Sound cards perform two simple, related tasks. First, they take sound from your computer and convert it into a format that speakers and headphones can use. Second, they take sound from a microphone or headset and convert it into digital data. Conversion of digital audio to sound is performed via a process called a digital to analog converter, or DAC. Conversely, another process, called an analog to digital converter (ADC) converts microphone audio to a digital format.

In the early days of computers, most PCs only came with a simple internal beeper. If you wanted more complex sound, you needed to install a sound card. As time went on, sound cards got smaller and more powerful. At the same time, CPU manufacturers have integrated sound technology into their chips. This means that most people have stopped using dedicated sound cards altogether. But while on-board audio is a popular option, sound cards still offer many benefits.

If you’re active on any forums, you’ll often see people arguing that on-board audio is good enough for gaming. So, are they just upset because they don’t have a nice, shiny sound card? Or are they on to something? In fact, most modern CPUs have good enough on-board audio for almost any purpose. The only “technical” reason to buy a sound card these days is if you’re mixing high-quality audio. That said, this argument is a bit disingenuous. Here’s why.

On-board audio still requires the use of CPU resources. Think of it like a graphics card. Theoretically, if you have a powerful enough CPU with enough cores and bandwidth, you wouldn’t need one. You could play Kingdom Come: Deliverance at maximum quality with just your CPU. But in the real world, that kind of CPU is not affordable for most people. You could have enough cash for a brand new car and still not be able to afford one. It makes more sense to offload the work to a dedicated GPU. This allows the CPU to focus on what it does best: calculations. In the same sense, a sound card takes some of the burden off your CPU. If CPU speed is bottlenecking your game performance, a sound card can be a significant help.

Another advantage of using a sound card is that it oftentimes offers output options that motherboards lack. For instance, suppose you want to plug your PC into a stereo system. Forget about 7.1-channel surround sound support for a second. First, you have to run a 3.1mm audio cable, requiring an extension cable. Next, you need to unplug this cable any time you want to use headphones. This means an ugly cable hanging around doing nothing. Instead, a sound card could allow you to use a line out or optical connection. This goes a long way to integrating your PC more naturally into your home stereo system.

What to Look For When You’re Shopping

So, you’ve decided to buy a sound card. Now all you have to do is sort through the plethora of options available to you. And that means navigating a bunch of technobabble, right? Let’s make things as simple as possible. Here are some features you should keep in mind while shopping for your new sound card.

Does it support surround sound?

Most modern movies and PC games come with support for surround sound. The problem is that many sound cards still don’t offer support. If you’ve spent thousands of dollars on a top-tier sound system, you want to take advantage of it. Look for a sound card with 7.1-channel surround sound support. On the other hand, if you’re just going to be using headphones or PC speakers, this feature is unnecessary. Headphone users can save money by buying a sound card without 7.1-channel support, and you won’t miss a thing.

Does it support MP3 encoding?

At first glance, this would only seem to be important for music, but it can also be important for gaming. The reason is that most game soundtracks and sounds are now stored in MP3 format. With that work now performed by the sound card, the CPU can make your game run even smoother.
Does it support 3D spatial imaging?

When you think of 3D imaging and PCs, you probably think of video cards. After all, the GPU is responsible for rendering those 3D graphics. But the graphics are only one part of what defines a game’s atmosphere. On a more subtle level, sound can be just as important. 3D spatial imaging ensures that the sound is “right” for the space you’re in.

This isn’t just useful for finding your enemy in a match of COD: Warzone. It’s also great for listening to music or watching movies. 3D spatial imaging allows for a wider soundstage regardless of what you’re listening to. This means more separation between instruments, for a more “live” feel.

What kind of ports does it have?

This might sound obvious, but not all sound systems use the same inputs and outputs. For instance, headphones and desktop speakers typically use a 3.5mm cord. Stereo systems and amplifiers, on the other hand, will use RCA or optical connections. Make sure your sound card offers the correct connection type for your sound system. 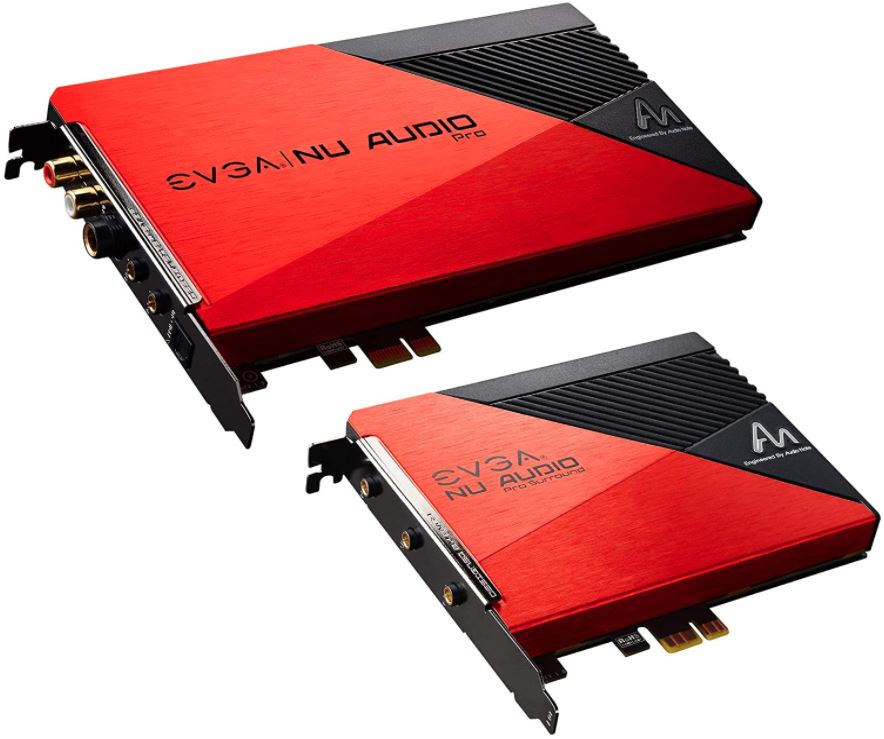 The EVGA Nu Audio Pro 7.1 is one of the premier sound cards on today’s market. This is mostly due to its two standout features: 7.1 surround sound support, and a built-in amplifier. With this powerful pre-amp, bass has noticeably more punch, and treble is more clear. This is particularly noticeable when you’re using headphones, without going through another amplifier. The output impedance is only 0.05 ohms, exceptionally low. The low impedance allows for nearly distortion-free audio, noticeable on any device. With line out and optical outputs as well as a headphone jack, this card is compatible with most sound systems. 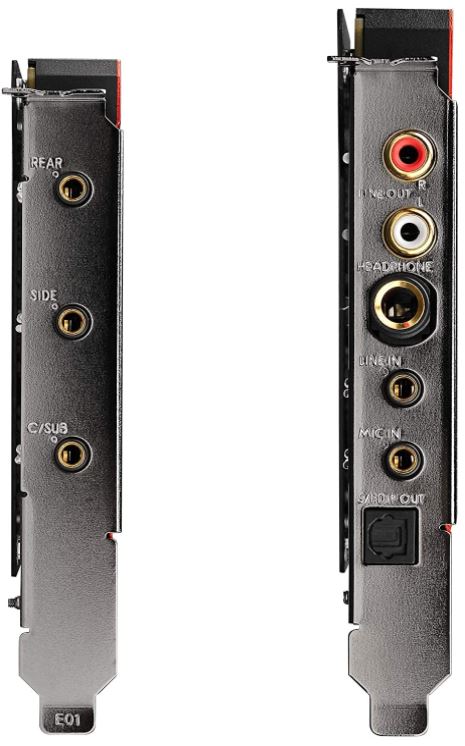 In addition to audio performance, the EVGA Nu Audio Pro 7.1 has built-in RGB lighting. By default, the lighting is sound-reactive, but you can tie it into your existing controller if you have one. The Pro 7.1 comes with a 3-year manufacturer’s warranty. If anything goes wrong, simply return it for a full refund. 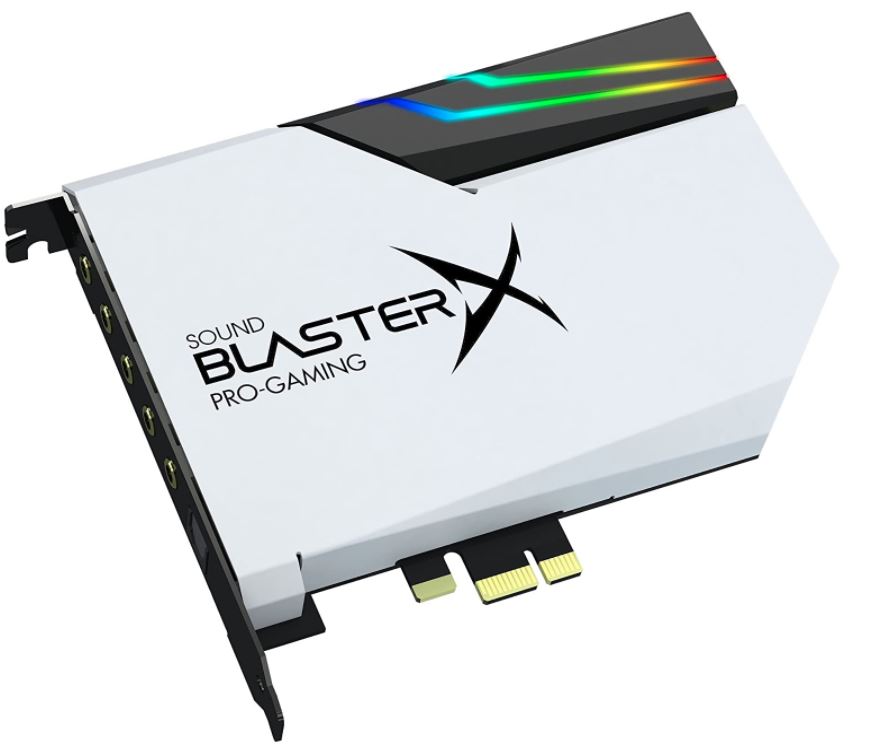 To fans of PC gaming, Sound Blaster needs no introduction. For years, they were the king of sound cards. They’ve even tried their hand at some pretty sweet USB sound cards. So, how does the Creative Sound BlasterX AE-5 Pure Edition compare to their reputation? In most respects, fairly well. To begin with, you get superior bit depth, with 32 bits at 384kHz. Combined with a 122dB signal to noise ratio, you’re looking at virtually zero distortion. This remains true even when you’ve got the volume cranked all the way up. 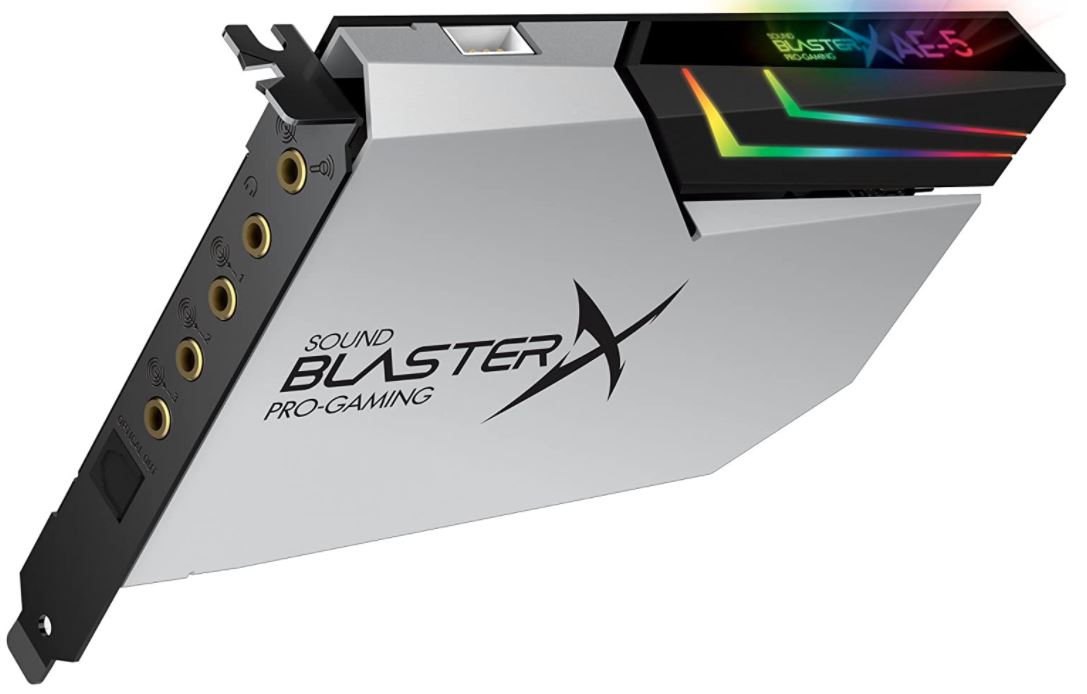 There are built-in pre-amps for your headphone. Don’t confuse this with the universal pre-amp on the Pro 7.1. These are smaller, simpler pre-amps that provide a boost to your headphones only. Still, considering how often you’ll use headphones with your PC, this is a nice touch. It certainly makes a noticeable difference when you’re listening to music. 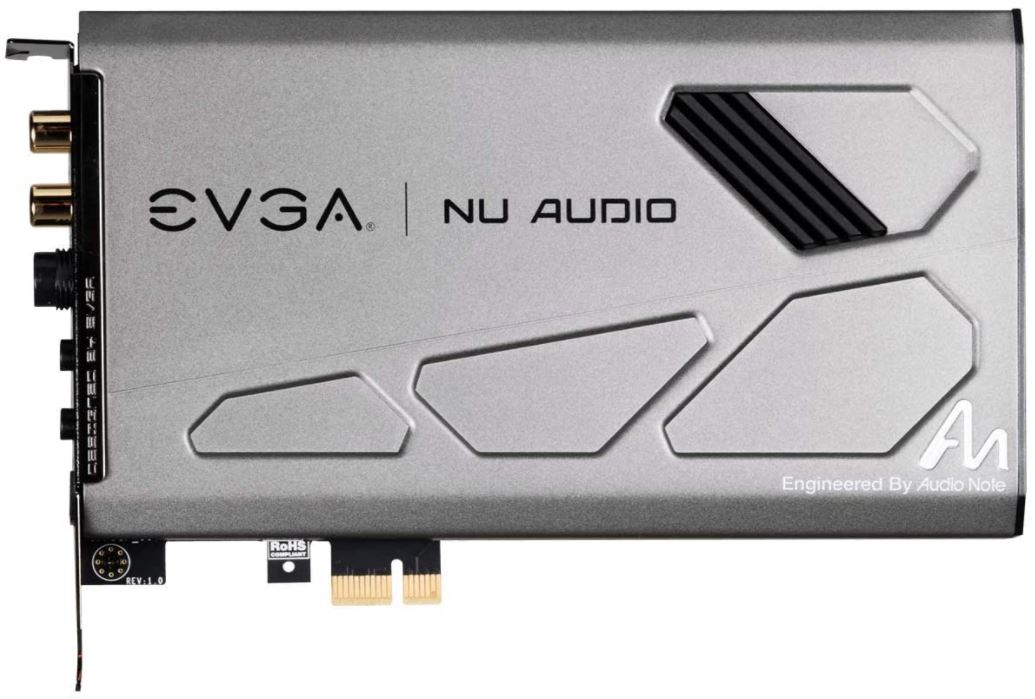 Both of the above options are a bit advanced. That’s great, if you’re looking for a sound card with plenty of extras. But what if you just want to take the sound processing burden off of your CPU? In that case, look no further than the EVGA Nu Audio Card. This is essentially a more basic version of the Nu Audio Pro 7.1, without any of the bonus features.

There’s no built-in amplifier, and there’s no surround sound support. On the other hand, the native x256 DSD audio support is quite good. You also get ambient RGB lighting, which will blend right in with your gaming rig.

Each one of these sound cards brings a lot of value to the table. But they all have their own quirks and unique benefits. Let’s go over what we’ve learned. First, we reviewed the EVGA Nu Audio Pro 7.1. In terms of gaming and home video, the Pro 7.1 is the best of the bunch. The built-in amplifier adds a lot of punch, which makes gunfire and explosions stand out during gaming. That said, the price tag is a bit steep if you’re just listening to music. Even if you’re doing audio mixing at home, the built-in amp is probably a bit much. It does more for you with headphones than it does if you’re going through a stereo anyway. For larger sound systems, you get 7.1-channel surround sound support. This is definitely the complete package.

Next, we looked at the Creative Sound BlasterX AE-5 Pure Edition. It’s the best choice for music, since it offers you the most bit depth. For audiophiles, it’s tough to do better. It also has some nifty features for gamers, such as the Scout Radar integration. All in all, it’s not a bad choice, and it comes with the Sound Blaster pedigree.

The last sound card we looked at was the EVGA Nu Audio Card. It’s similar in many respects to the Pro 7.1. However, it doesn’t support 7.1-channel surround sound. It also doesn’t have the same built-in amplifier. The plus side is that it’s significantly more affordable, and it still puts out some great sound. If you just want to unburden your processor without any fancy extras, the Nu Audio Card is a solid choice.