A reality of modern living is that we need to be connected. The internet has become an essential part of everyday life. Whether you’re working with banks, government employees, or simply trying to keep in touch with your friends, being able to use a computer is a luxury you can’t afford to have.

Unfortunately, computers aren’t always as accessible as they should be. This isn’t to say that manufacturers and vendors haven’t made effort. The high contrast modes in both the Windows and Mac operating systems are excellent. The problem is that hardware has typically lagged behind software. If you haven’t learned to touch type, you’re in a bit of a catch 22. In order to learn where the keys are, you’ll need to be able to see them. Even if you do know how to touch type, there are always keys that you can’t quite remember. After all, how many of us know the location of the “^” key off by memory? Very few of us can say we do.

Fortunately, visual impairment doesn’t have to impact your ability to use a computer. With the right large print keyboard, even the worst visual impairment can’t prevent you from learning to touch type. Today, we’ll be taking a look at the three best keyboards for the visually impaired. We’ll help you understand the differences between them, and choose the one that’s right for you.

Ablenet is been in the business of accessible technology for several years. One of their longest running and bestselling products is the KeysUSee keyboard, and this is the latest version of that product. Even though the design looks a little 90s, the very same keyboard has been chosen for people with visual impairment for many years. If it’s still selling to this day, there must be something going for it. We decided to find out what that was.

The AbleNet Large Print USB Computer Keyboard uses the same shape and styling as most keyboards from the late 90s and early 2000s. This means that it is a very large keyboard bezel, making it easy for your hands to naturally find home position. The keys are a little larger than what’s being used in most modern keyboards, but we found that to be an asset. Users who have been typing for a long time will find the long travel of the keys to be more natural feeling.

The key spacing is a little larger than some. In a few ways, this may take a little adjustment. But if you’re getting older and find that your fingers aren’t quite as nimble as they used to be, this will make typing much easier. 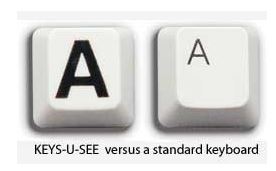 If you’re struggling to find the right keys, this keyboard is likely the best way to do so. Many of the functional keys are printed with not only the relevant symbol, but the function it performs. For example, the backspace key still has the large left pointing arrow, but also the word “backspace”. The same goes for capslock, and many of the keys above the arrows. Because those keys are so small, they’ll be printed with abbreviations like “PD” for page down or “HM” for home. Generally, this is pretty easy to figure out. The important thing is that they’re easy to read, and since this keyboard uses one of the largest fonts of any models available, the next is very clear.

Another nice feature is the media keys along the top of the keyboard. These keys give you quick access to features like search, add to favorites, homepage, and chat. You also have controls to change tracks if you’re watching videos, enjoying a slideshow, or listening to an audio book. This saves you from having to move your hand to the mouse, navigate to the correct element, then move back to the keyboard.

They key actuators use in this keyboard are very soft, but present a noticeable buckling feel to them. The process of typing is very much about muscle memory. This is why it’s so important that your fingers can physically feel the transition from applying pressure to a key, to it making contact with the sensor below. Generally, users find that this allows them to pick up touch typing much more quickly. The process can seem daunting at first, but often users find that the reason they’ve struggled to learn touch typing is because they haven’t used the right keyboard.

For us, using this AbleNet keyboard felt a lot like a trip down memory lane. They keyboard is almost identical in design to the ones we learned to type on. While the design is a little different from the ones we use today, manufacturers have been changing the keyboards in order to save money and make their keyboards more compact. This one might be a little larger, but it’s designed strictly for the purpose of being a good keyboard.

Looking at ACP’s product line, you might wonder what they have in common with each other. In reality, they’re not as much of a manufacturer as they are a procurement company. Thanks to the power of the internet, ACP is able to find a market for products that aren’t always easy to find in store shelves. From car parts to electronics, if you’re looking for something unique you can probably find it in their store.

As a modern keyboard, the ACP Ezsee Low Vision Keyboard is ideal for people who are used to typing on a laptop or compact computer. The keys themselves use a standard spacing, although some small changes have been made to make the keys easy to find. For example, The enter key is commonly L shaped in modern keyboards. This can make it challenging to tell from one key to the other. On this keyboard, it’s straight with no bend. You’ll also notice that keys that are commonly staggered are sorted into nice straight grids. This is easy on the eyes, as you’d hope to find with a large print keyboard.

This is, by far, the easiest keyboard to see. The main difference is the color scheme. This keyboard is bitch black with bright yellow keys. The contrast between black and yellow is the easiest for your eyes to make out, so even if you’ve got severe vision problems you’ll likely be able to see the text on the keyboard better than any else.

A subtle but powerful effect is how the keys are spaced. There is a small black piece of plastic that separates each key. This creates a grid like effect that adds further separation between the keys. 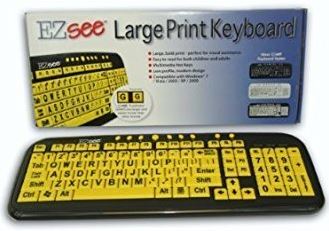 Although this keyboard has quite low travel, the keys have a moderate firmness to them. This means that the keys are still easy to depress, but the chances of accidentally pressing a key are minimized. Despite the firmness of the keys, they are still dead silent. This means that you can type away comfortably without disturbing anyone else in the room.

Although Nuklz doesn’t sell a lot of products online, they’re a large supplier of accessable technology to schools and government agencies. Their large print keyboard is one of their best-selling products, and they’ve released to the mass market so that this technology can be available to everyone. What separates them from the competition is their manufacturing process.

While many companies create a product from scratch, the downside to this approach is that their products tend to be much more expensive. Since there isn’t as many consumers interested in a large print keyboard (at least compared to the standard models) the costs of a low run manufacturing process are higher. What Nuklz does is purchase existing mass-market hardware and modify it. The very same keyboard you see in front of you is commonly sold with standard print. But they purchased it blank, and added the large print themselves. This allows you to get the keyboard for a great price, without having to sacrifice quality.

The Nuklz Large Print Computer Keyboard is one of the most compact keyboards on the market. It’s a standard 110 key unit, including all of the sections including a number pad and the function keys. With a product like this, manufacturers are often quick to cut corners. But when you need a key, you need a key, so it’s nice to see a full-size layout with standard spacing.

But the one thing that’s not standard is the bezel around the keyboard. This unit is designed to be as compact as possible. It’s got a very sleek design that is almost minimalist in nature. This is ideal for anyone who wants to be conservative with their desk space, without forcing themselves to use a cramped and uncomfortable keyboard. 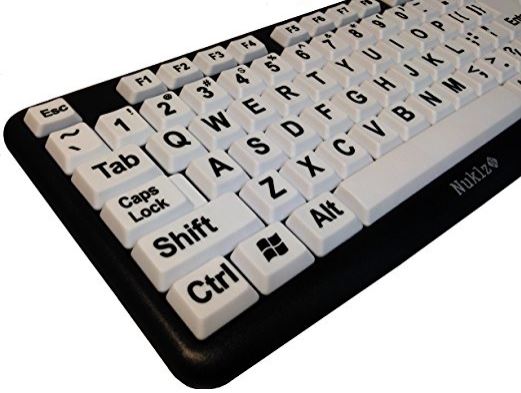 Visually, the keyboard is very clear and easy to see. The layout is ideal for people who are moderately familiar with how a computer works. Keys like backspace, page up, insert, and several others are abbreviated. This makes them even easier to see for some, but you’ll need to have a rough idea of what you’re looking for to avoid confusion. 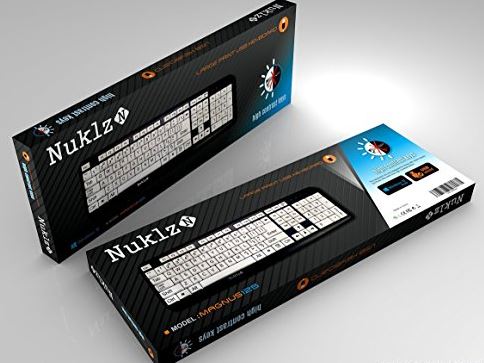 The low-profile keys used in the Nuklz large print keyboard are similar in nature to those found on a laptop. They have very little travel, so you don’t need to apply a lot of pressure to accurately press the buttons. This is great for anyone who struggles to use a standard keyboard. Motions are smaller and softer. Using it feels almost contemplative in nature. If we had to learn to touch type all over again, this is the keyboard we’d use.

Which Large Print Keyboard is Right for Me?

For most users, the Nuklz Large Print Computer Keyboard is your best option. This keyboard is well suited for people who require glasses, but don’t want to have to switch to reading glasses just to use the computer. Even if you don’t have glasses, it might be worth considering this keyboard if you’re the type who likes to use large fonts on your computer.

If you’re aging and want a keyboard that is just as easy to type on as it is to see, the AbleNet Large Print USB Computer Keyboard has one of the longest running production times of any keyboard on our list. It uses the classic style of keys that are easy to get used to, making typing a much more comfortable experience. If you want to take it to the next level, you might want to consider a keyboard wrist wrest to help make typing a dream.

If you suffer from severe vision problems, you best option is the ACP Ezsee Low Vision Keyboard. Offering much more than just large print, the high vis coloring of this keyboard makes it as easy on the eyes as it can be.