Most people think a dead LCD display means you have to replace the panel. This can be prohibitively expensive, and it’s usually cheaper just to buy a new TV or monitor. But unless there was physical damage to the screen, it’s rare for panels to break. More likely than not, your LED backlights are the culprit.

You won’t find backlights in all TVs. Plasma TVs forego them in favor of individual pixels. But if you bought a run-of-the-mill TV from a brand like Vizio, you have backlights. That’s a good thing! Backlit TVs can produce video that’s just a smidge less vibrant than other technology, for a significantly reduced price.

If you want to fix your TV, you’re going to need the right tools. In this case, that means getting your hands on a backlight tester for your LED lamp beads.

We’re about to review three of the best LED lamp bead TV backlight testers that money can buy. To find out how they stack up, we’ll need to take a close look at their designs and features. But if you don’t have time to read the whole guide, here’s a quick summary:

The TKDMR LED Lamp Bead TV Backlight Tester is small and compact. It measures 3.7 inches wide, 2.1 inches deep, and 1.1 inches thick. And at 8.8 ounces, it’s light enough to carry in your pocket. The housing is constructed from a white polymer, and seems durable enough for day-to-day use. 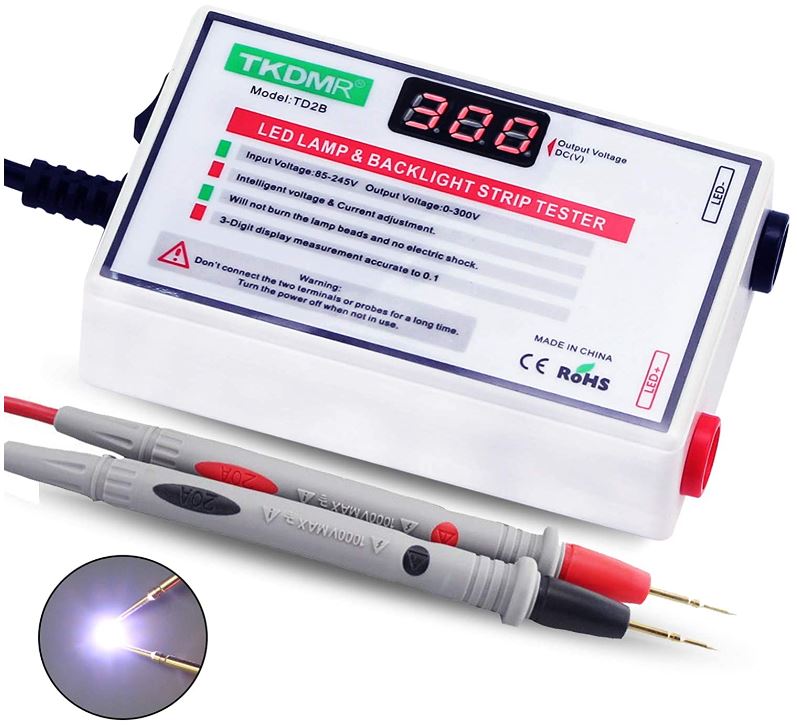 On the left side of the housing, you’ll find a power switch that turns the unit on and off. In the same area is an AC power cord, which has a standard two-prong North American plug on the end. 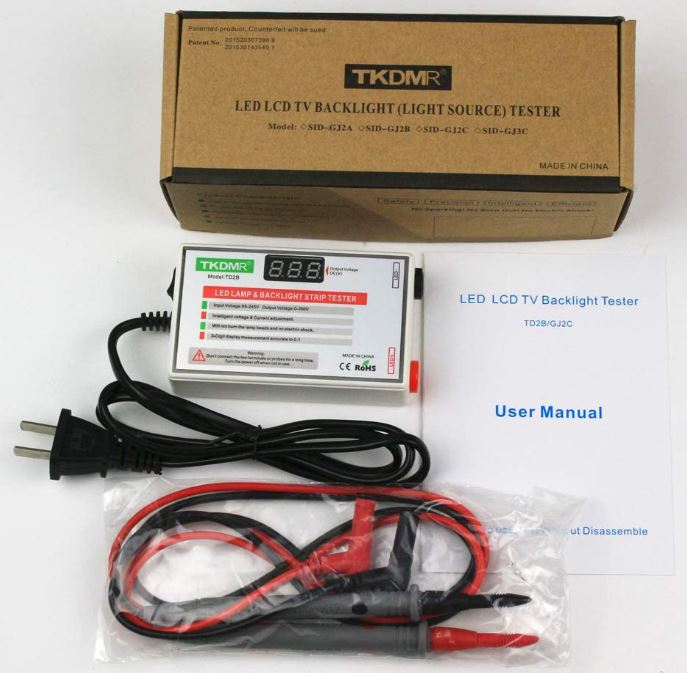 The positive and negative lead connections are colored a standard red and black. They’re located on the right side of the housing, and the lead cables can be unplugged for storage. The cables terminate in a set of long rubber leads that are easy to hold on to. At the ends of the leads are ultra-fine pins that are tiny enough to use on even the smallest electrical contacts. 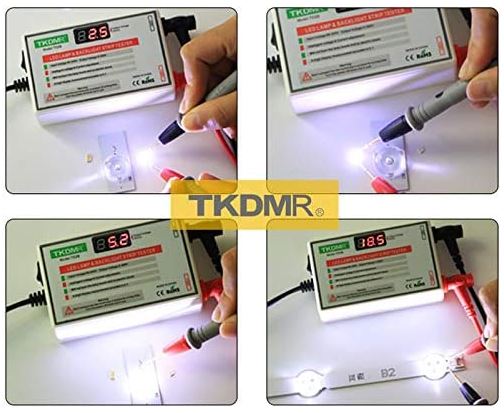 The front of the housing sports an LCD display, which shows the output voltage in bright red numerals. Beneath this are a set of specifications and helpful tips. 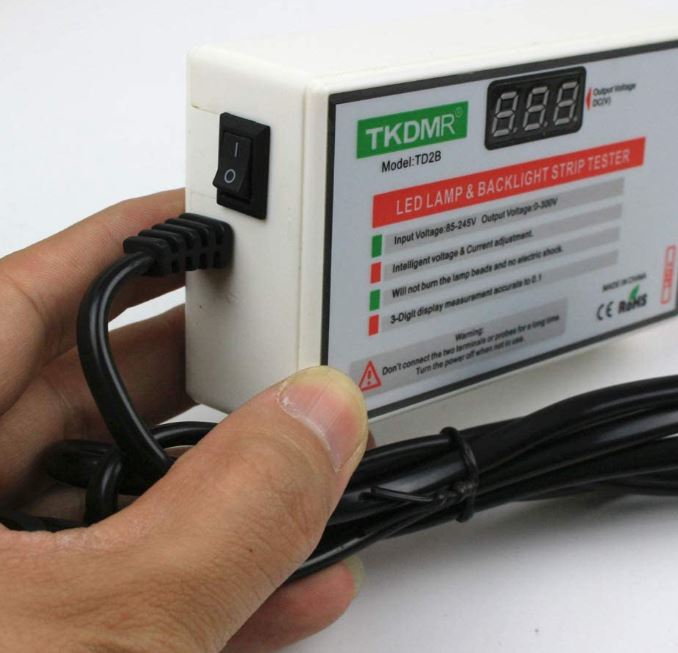 The TKDMR tester can accept an input voltage of between 85 and 265 volts. It can output this power at anywhere from 0 to 300 watts. In order to keep from overloading your LEDs, it won’t go to 300 watts all at once.

Instead, it will start at 0 watts when you touch the contacts with your leads. Then it will slowly ramp up power until it reaches an appropriate level. This is designed not to burn out individual diodes, which can sometimes be rated for as little as 5 volts. The working current of 0 to 30mA will be effective on the majority of TV backlights.

The SID LED Multipurpose Tester for LED TV Backlight is a bit beefier. The white plastic housing is 9.17 inches long, 6.34 inches wide, and 2.05 inches thick. And at 14.39 ounces, it tips the scales at nearly a pound. Needless to say, you’re not going to be carrying it around in your pocket. 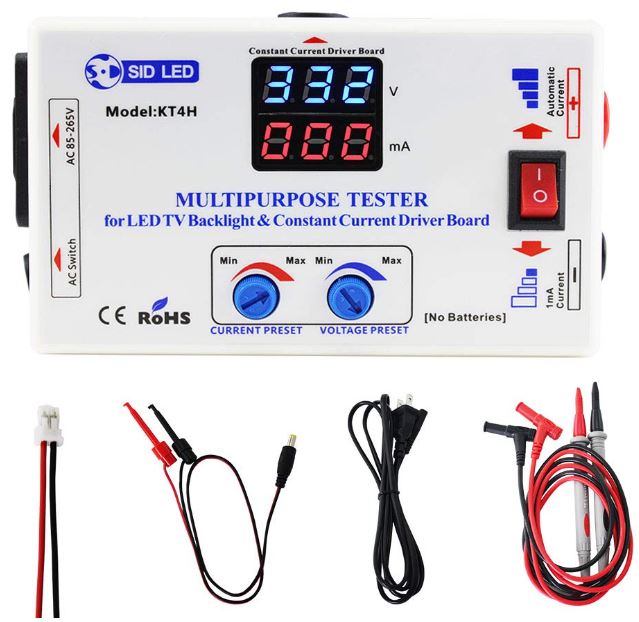 The power cord connects to the left side of the housing, and is removable for transport. Next to it is an AC power switch that controls power to the entire unit.

At the front center of the housing is a large LED display. The top half shows your current output voltage in blue numerals. Beneath that, you’ll see the current milliamp level in red numerals. Beneath the display is a pair of blue dials, which you can operate with your fingers or a flathead screwdriver. These allow you to exercise precision control over both your voltage and your amperage. 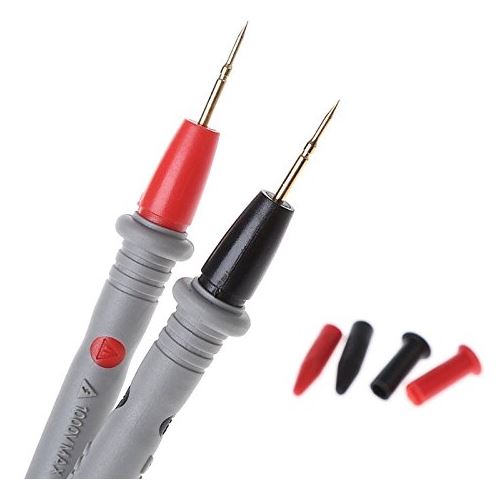 The test leads plug into the right side of the housing. In addition to standard pin-style leads, there’s a set of right-angle leads for accessing awkwardly-positioned contacts. There’s also a KT4H connector, which will allow you to test your TV’s temperature controller as well as backlights. A separate switch controls the power to the test leads. 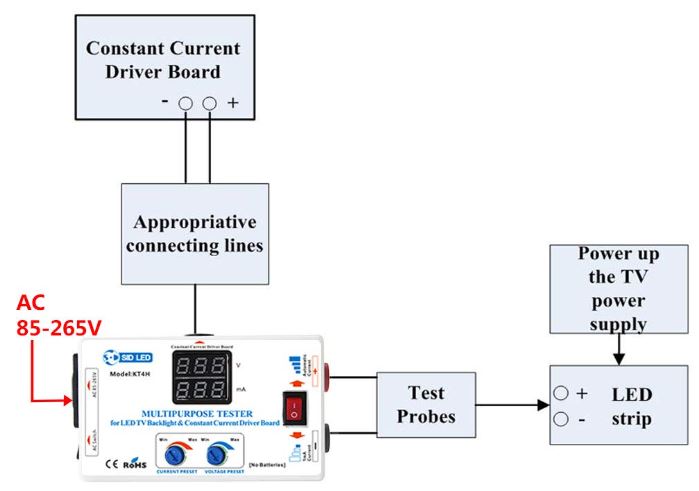 The input voltage can range from 85 to 265 volts. You can manually adjust the output voltage to between 0 and 330 volts. Or you can set the tester to automatic mode, where it will automatically ramp up. The amperage output can go as high as 150mA, which is enough for pretty much any TV. And like the output voltage, it can be set to automatic mode. There’s even a special circuit board testing mode that you can turn up to 999mA.

In addition to all this, the SID tester won’t burn out your LED light beads if you mix up the polarity. With most testers, you need to be careful not to confuse the anode and the cathode.

The KOET LED TV Backlight Tester is superficially similar to the TKDMR tester in many respects. To begin with, its white housing is very compact, at just 3.66 inches long, 2.36 inches wide, and 1.18 inches thick. It’s also the lightest of the bunch, weighing in at just 3.5 ounces. That’s less than a single McDonald’s hamburger patty. 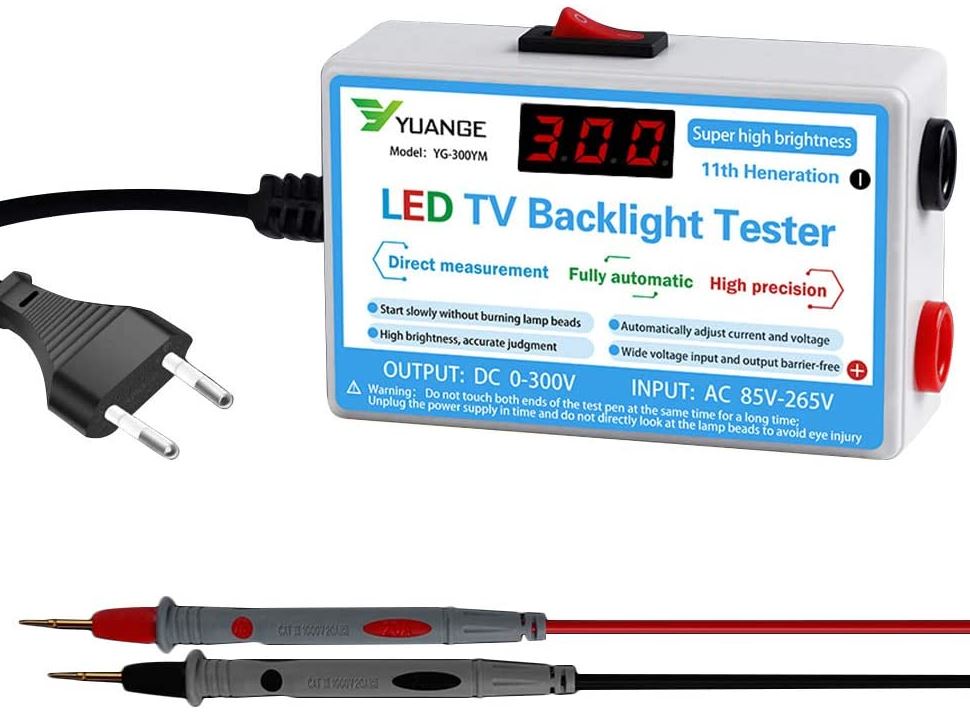 The power cord is permanently connected to the left side of the housing, and terminates in a grounded three-prong tip. At the top of the housing is a red toggle switch, which turns the power on and off. The leads connect to the right side, and are colored in a traditional red and black. They have very fine tips, which makes working with small contacts a breeze. 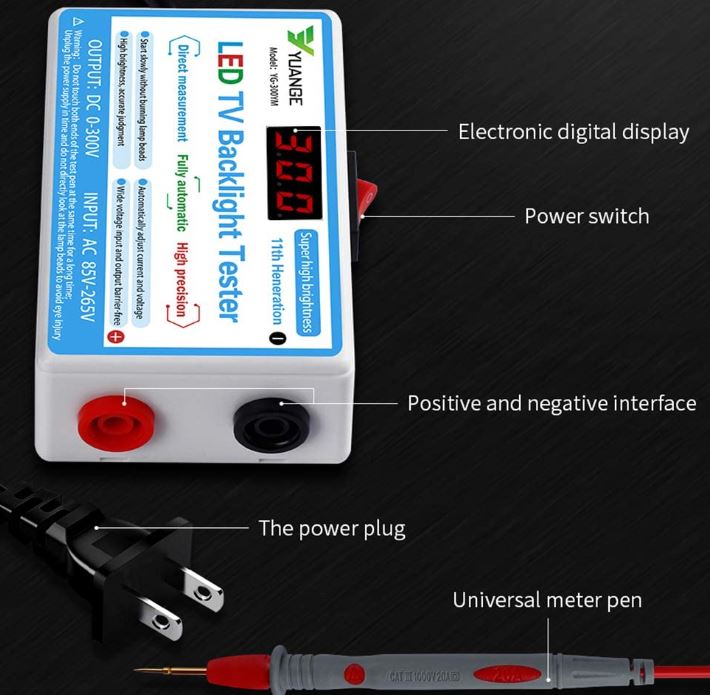 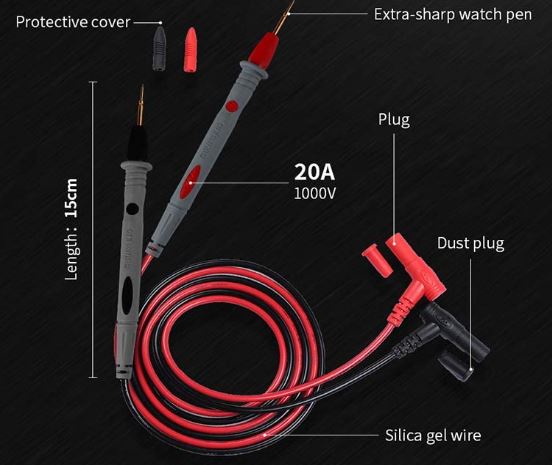 This tester features automatic current and voltage adjustment, so you don’t need to be an expert to use it. The current automatically switches to 15mA or 30mA as needed for the job. The same goes for the output voltage, which goes from 0 to 300 volts. The accepted input voltage can range between 85 and 265 volts.

What is an LED Backlight?

You might be surprised to learn that there are LEDs in your LCD TV. Isn’t the entire point of the TV that it uses LCD technology? The answer is yes… and no.

LCD is short for “liquid crystal diode,” which is the technology that gives HD and 4K TVs their color. However, the LCDs themselves don’t produce any light. The crystal in each pixel simply changes its shape to convert white light into different colors. Or, in the case of black, it absorbs the light to create a negative space. But the original white light has to come from somewhere.

Old-school LCD displays used cold-cathode fluorescent lamps (CCFLs). These were affordable and reliable, but not as efficient as LED lights. Worse, they contained mercury, which made disposal expensive and recycling dangerous. As LEDs became more affordable, manufacturers slowly made the switch. Since 2013, no major manufacturer has produced a CCFL-backlit LCD TV. Unless your TV is very old or a plasma TV, it almost certainly has LED backlighting.

LED backlights can be arranged in a few ways. In most TVs, the term “backlight” is actually a misnomer. Displays tend to use edge lighting – lights in the sides or bottom of the TV. Special reflectors inside the display spread the light around, creating a more or less uniform light distribution.

Some cheaper TVs will have fully-backlit TVs, with the lights arrayed behind the screen, facing the viewer. This actually produces a better image, but it makes the display significantly thicker. Higher-end TVs use full backlighting, but with a more complex set of reflectors that slim down the design. 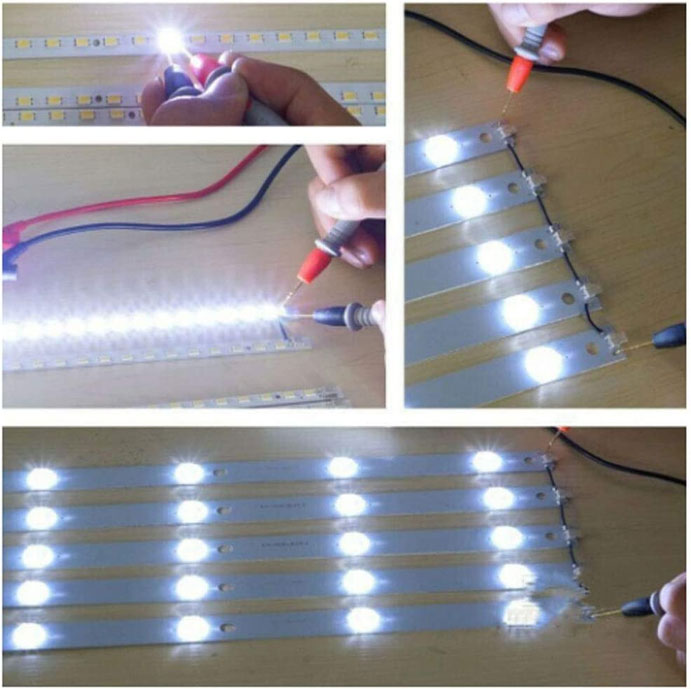 How to Test Your LED Backlight

In most cases, the LED diodes themselves don’t die. At least not until they’ve been used for tens of thousands of hours. The same goes for controllers, which can last for decades if they’re not abused. In most cases, there’s a problem with the LCD cable, fuse, power supply, or motherboard. A few pointers before you begin:

Finally, do this at your own risk. Every TV is different, and it’s impossible to write a catch-all guide for every display. Then again, if your TV is already broken, what do you have to lose?

Inside the TV, you’ll need to locate your LED light strip(s). Follow the cables from the strips, and you’ll find the controller where it meets the ribbon cable from the panel. At the controller, look for the following elements:

To test an individual diode, connect your tester to the backlight in parallel and slowly increase the current. If your tester is automatic, this will happen on its own. As you increase the power supply, the diode should eventually illuminate. If it doesn’t, you know it’s defective.

Which LED Backlight Tester is Best?

So, which one of these LED lamp bead TV backlight testers is the best? A lot depends on what you’re trying to do. You could make a good argument for any of them. That said, here are some of the things we’ve learned.

We started out by reviewing the TKDMR LED Lamp Bead TV Backlight Tester. This is a straightforward tester without any complex controls. In fact, the only control is the power switch. That said, the intelligent current adjustment does a great job of maintaining a safe output voltage. And while you can’t use it for every LED problem, the 30mA of current will be plenty for most jobs.

Second on our list was the SID LED Multipurpose Tester for LED TV Backlight. It’s a bit bigger and bulkier, but it has some benefits that the others don’t. For one thing, you can manually adjust the voltage and amperage. For another thing, you can output up to 150 amps, which makes it a lot more versatile. Finally, you don’t have to worry about LED diode polarization when you’re touching the contacts.

Bringing up the rear is the KOET LED TV Backlight Tester. This is the lightest of the three as well as the smallest. It also has automatic voltage and amperage adjustment, although there’s no way to make any manual changes. And with a grounded plug, you can feel a little bit more secure.

Guide to the Best Laser Distance Measure with …
November 6, 2018