LED lighting is a versatile way to add a bit of flair to your home. When many people think of LED bulbs, they think of ordinary lighting. And yes, LEDs have rapidly been replacing older incandescent and CFL bulbs. But LEDs are good for a lot more than just your old ceiling fixture or floor lamp. Because of their compact size and cool operating temperature, they can be used for a number of applications. For instance, you can install a set of fairy string lights to spruce up a foyer or decorate a bookshelf.

Puck lights are another useful application. Yes, puck lights have been around for a while. But before LEDs, they were typically made with halogen bulbs. You could easily burn yourself just by brushing the glass! They also posed a fire hazard if they were installed near sheer curtains, or in a poorly-vented space. LED puck lights are easy to reposition wherever they’re needed.

We’re about to review three of the best LED puck lights that money can buy. We’ll start with the Cadrim LED Puck Lights. These long-lasting lights will appear in 12 different colors, in addition to white. Next, we’ll review the Brilliant Evolution LED Puck Lights. These lights have a timer mode that can be set for up to 120 minutes. Finally, we’ll look at the Lightbiz LED Puck Lights. These come with a magnetic mounting base, along with a rechargeable internal battery. How do they compare? Let’s take a closer look, and find out! 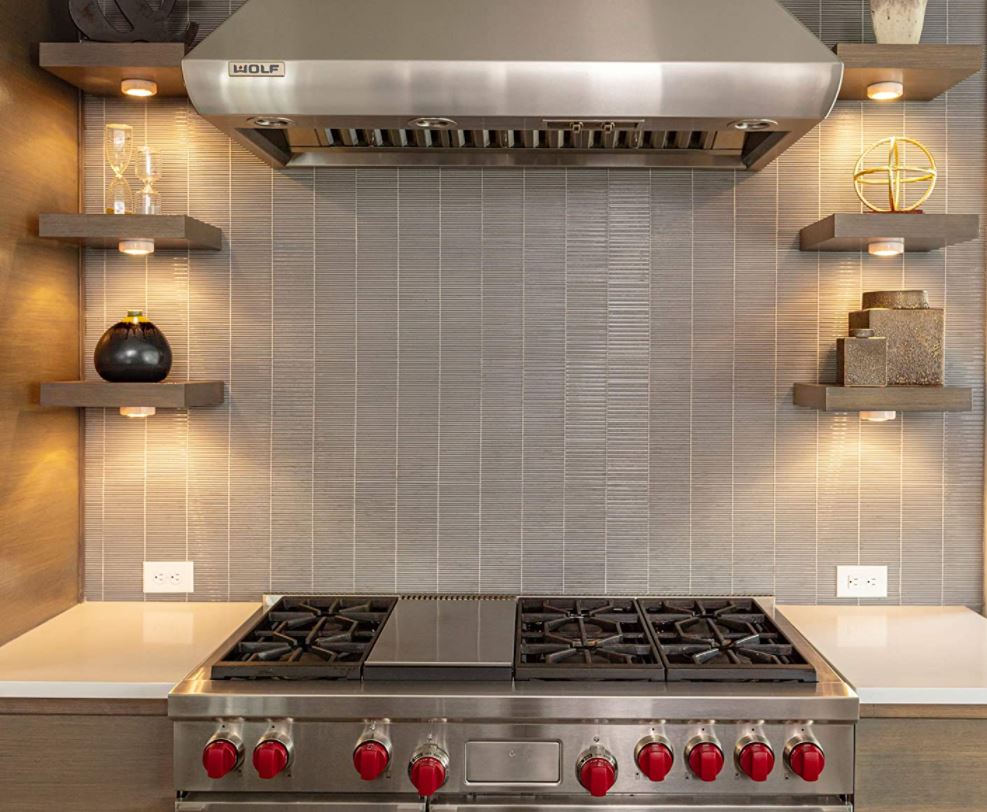 Before we do anything else, let’s talk about what makes a good LED light. Manufacturers like to throw a lot of numbers at you, like color temperature and brightness. But if you don’t know what these numbers mean, they don’t really help you very much. So, here’s a quick guide to LED basics. We’re trying to stick to things that apply to puck lights. Depending on your application, you may need different features. For example, if you’re shopping for LED pool lights, you want a set that’s as waterproof as possible. Let’s just stick to the basics.

To begin with, it’s important to know how energy efficient, or not, your lights are. A lot of manufacturers like to talk up their bulbs’ longevity. You could get caught up in whether a bulb is rated for 50,000 or 100,000 hours, but why? That’s a ludicrous amount of time, between five and 10 years of continuous operation. When the bulb does need to be replaced is a matter of opinion. That’s because an LED diode doesn’t burn out all at once. Instead, it slowly fades over a period of time. Industry standard considers an LED to be dead once the bulb drops to 70 percent. That said, this takes a very long time no matter what light you’re using.

Another, similar consideration is the warmth or coolness of the color temperature. While LEDs can be any color, household lighting is measured on a standard color spectrum. So unless you’re looking for a fancy green or blue bulb, you’ll be looking at standard household colors. Household bulbs are measured on a color spectrum, and the units are measured in Kelvins. Warmer bulbs have a lower Kelvin number, and produce light with a gold or rose gold tinge. When you reach 3,000 Kelvins, you’re in the range of standard soft white. After about 3,500 Kelvins, you’re into the range of bright warm white. Anything beyond 4,000 Kelvins is a bright cool white, with a distinct blueish tinge. 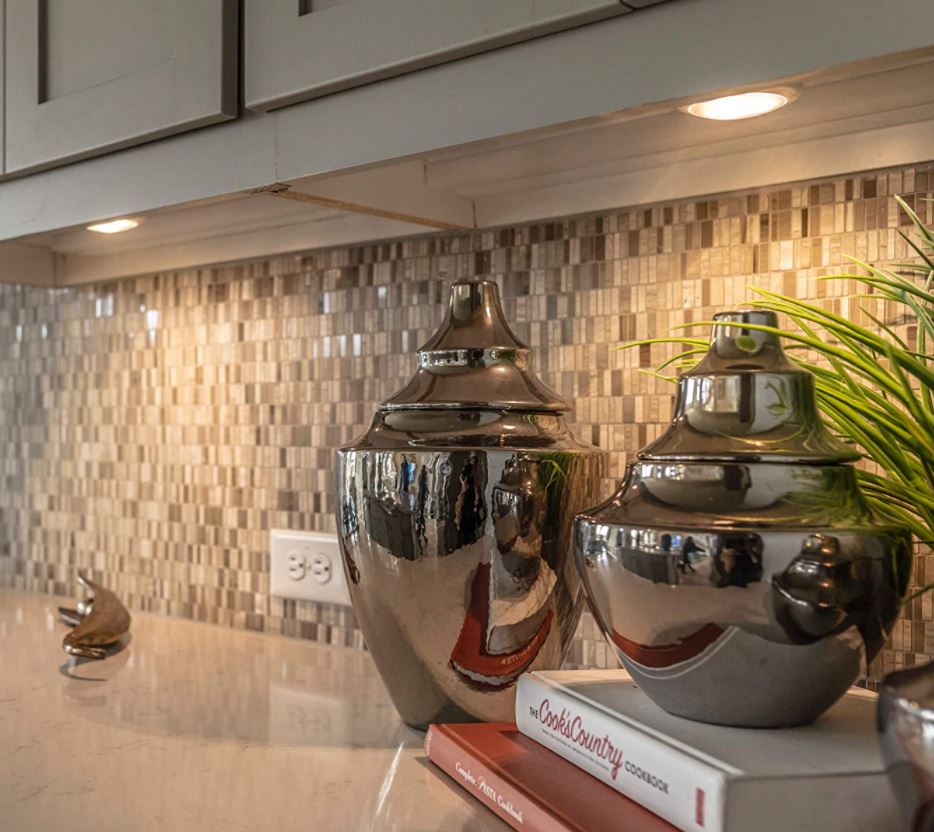 What exact brightness or warmth you should be using depends in part on your preferences. Some people like a brighter home, while others prefer a more relaxing, dimmer lighting scheme. That said, most people use brighter bulbs in rooms where visibility is paramount. In the living room, for instance, a bright bulb will easily illuminate the whole room. However, a dimmer, warmer bulb could also be used for accent lighting. By contrast, most people use dimmer, warmer bulbs in the bedroom, because they don’t keep you up all night.

Bathrooms are a special case. Some people prefer a dimmer bulb for comfort and convenience at night. Others prefer a brighter bulb for shaving or putting on makeup. Accent lighting can also be helpful here. You can have a dim, warm room light with brighter lights directly around the mirror. The normal upper limit for household bulbs is around 5,000 Kelvins. Even brighter bulbs are available, some as high as 7,000 Kelvins or more. These are generally used for commercial applications, and are too harsh for inside the home.

Many people are still hesitant to use LED bulbs, and it’s understandable. Early LED lights were not the best, and were suited more for small, single-direction track lights than anything else. Newer LEDs use diffusing technology to spread the light out for a softer glow. Similarly, early LEDs were rightly criticized for poor color accuracy. But it’s been a long time since anyone needed to worry about that. Today’s LED lights look just as good as older incandescents, without the heat or the waste. And when compared to halogen bulbs, the benefits are even more apparent. 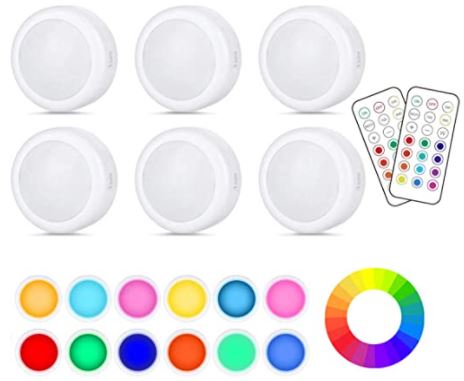 The Cadrim LED Puck Lights are a six-pack of simple, white hockey puck lights. When they’re off, the lenses have a frosted appearance, like a decorative incandescent fixture. When they illuminate, they provide a warm white light between 2,800 and 3,300 Kelvins. At a brightness of 55 lumens, they’re not exceedingly bright. They’re made for under-counter lighting, or for accent lighting on shelves. You’re not going to light up an entire room, but that’s not what hockey puck lights are for. They’re for adding a dash of light where and when it’s required. In that regard, these lights perform admirably. 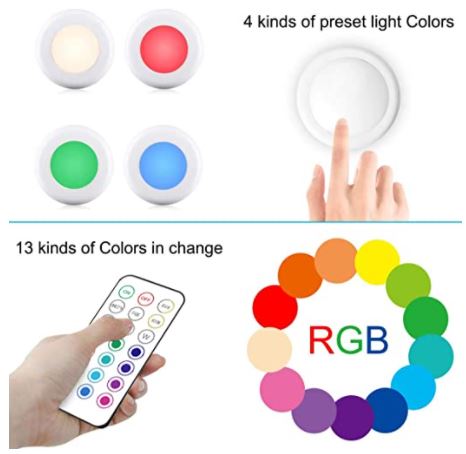 That said, the lights aren’t limited to just white. If you want a colorful accent, you can cycle through 12 additional colors. All four quadrants of the color wheel are well-represented, so you can get the color you want. Not only that, but you can adjust between 10 different brightness levels. If you want a very soft accent for a very dim room, you can simply use one of the lower light levels. When the lights are turned on and off, they’ll remember the setting they were last at. If that’s not enough, you can even activate a fade mode that makes the lights slowly breathe. 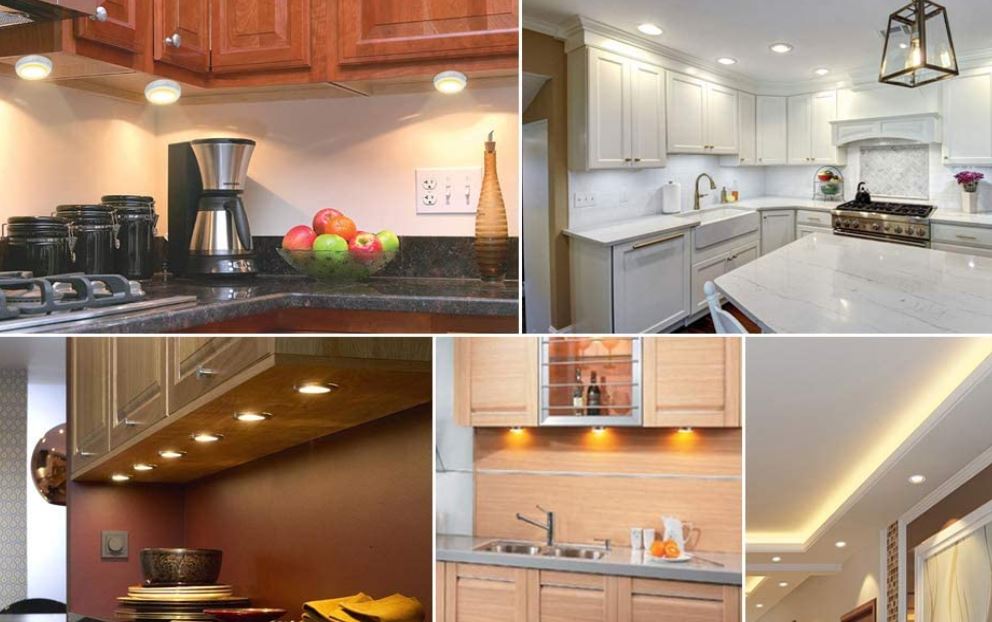 If you want your lights to turn off automatically, you’ve got the option. The built-in timer can be set for 30 or 60 minutes. This is great if you frequently forget to turn out the lights. Just set the timer and stop worrying about it. All of this is achieved with a pair of small, handheld remotes. The buttons are fairly easy to understand, and you can learn to use it quickly. 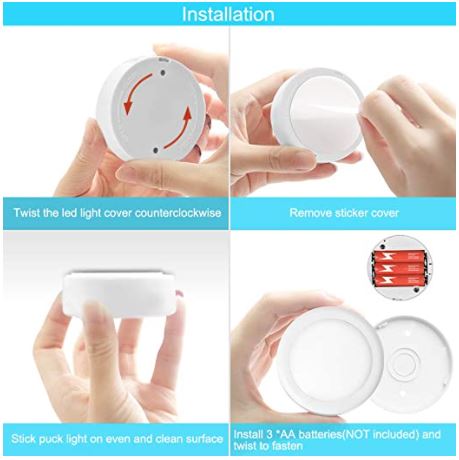 The Cadrim lights adhere with a simple stick-on method. The back of each light has a removable film, which can be peeled away. When you’re ready to install the light, remove the film and slap it in place. Each light takes three AA batteries, which you’ll need to provide for yourself. A set of batteries will last for up to 200 hours. If you use your lights for two hours a day, you’ll only need to change the batteries every three months.

The Brilliant Evolution LED Puck Lights can be ordered individually, in a three-pack, or in a six-pack. All packages come with a remote as well, which allows for easy operation. The lights themselves have clear lenses, with three LED diodes inside. When the diodes illuminate, they provide a diffused glow, so they appear to be a single bulb. The lenses are domed, which creates an attractive arched effect when the lights are viewed in profile. They glow with a brightness of 55 lumens, suitable for spot lighting as well as for accents. The 3,000-Kelvin temperature is warm white, ideal for most household purposes. 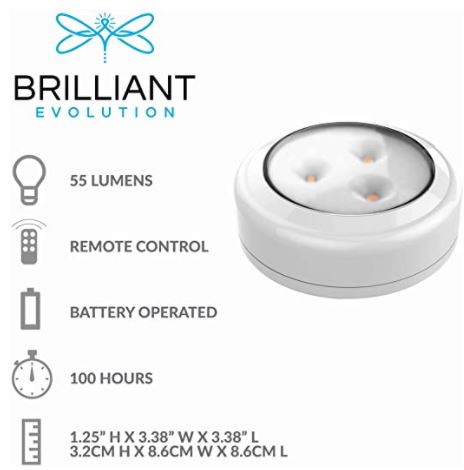 In addition to a simple on/off button, the controller has a couple additional functions. You can use the up and down buttons to adjust the dimmer. You can also use shortcut buttons to get directly to 50 or 100 percent brightness. At the bottom, there are four buttons for setting the timer. You can choose 15, 30, 60, or 120 minutes as needed for your task. 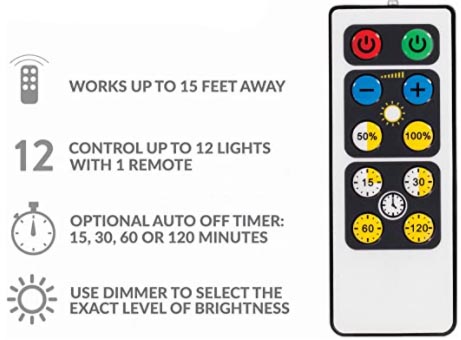 The Brilliant Evolution lights can be adhered to most surfaces with the included double-sided adhesive. Alternatively, there are screws included for more permanent installation. There are also batteries included in the package, with three AAs for each light. That’s enough to keep them lit for 100 hours. 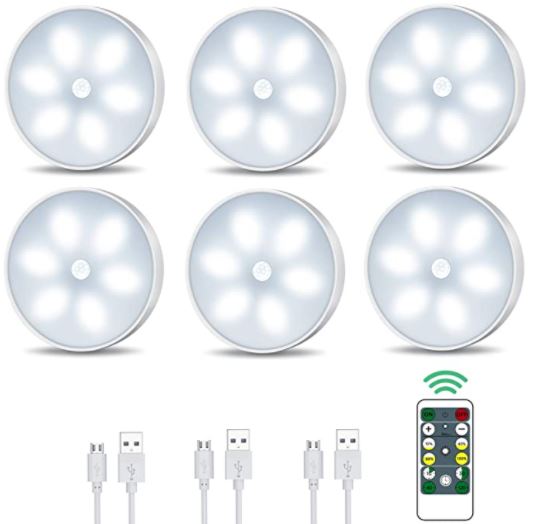 The Lightbiz LED Puck Lights are a more modern, technological option than our last two. It comes in a one, three, or six-pack, and has a wide, flat profile. Instead of being limited to adhesive installation, you can also use the magnetic plates that come with the kit. This lets you install the lights on a metal vent hood, trim, or other conductive surface. 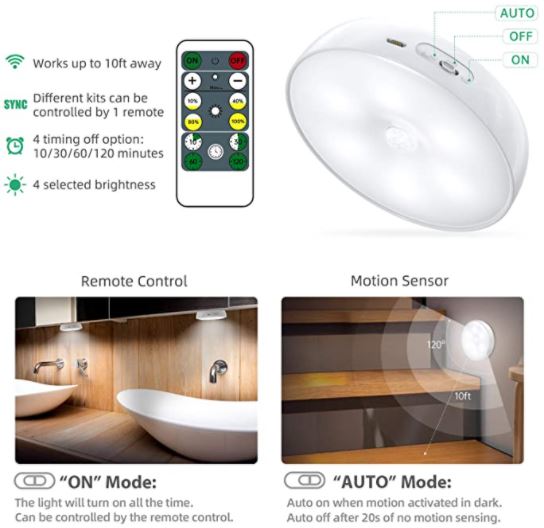 Each light is rated as pure white, with 60 lumens of brightness. This makes it slightly brighter than our last two options, although the difference is barely perceptible. Like the others, the brightness is adjustable. You can cycle between 10, 40, 80, and 100 percent brightness by tapping shortcut buttons. The plus or minus buttons will do the same thing on a stepless basis. You can also set a timer for 10, 30, 60, or 120 minutes. In addition to all that, the Lightbiz lights also have built-in motion detectors. This makes them an excellent choice for closet or cabinet lighting. 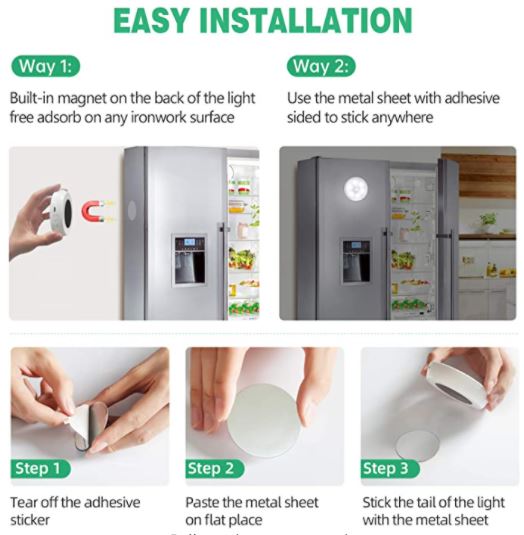 So, which of these LED puck lights is the best choice? It all depends on what you’re looking for. The Cadrim LED Puck Lights are the best of the bunch when it comes to battery life. With up to 200 hours between replacements, you don’t have to mess with them very often. Not only that, but these lights provide plenty of color options. They’re suitable for accent lighting in a variety of circumstances.

The Brilliant Evolution LED Puck Lights don’t have all the color options of the Cadrim lights. However, they have a very wide timer length range. A 120-minute timer can make a big difference if you want the lights to run for more than an hour. Moreover, you can buy a one-pack or a three-pack, not just a six-pack. If you don’t need all six lights, you’ll save a bit of money.

The Lightbiz LED Puck Lights are a different animal altogether. They’re fully automated, with a motion detection mode that can be used for closets, cabinets, and other small spaces. They can also be set to several timer modes, and have adjustable brightness. Moreover, they include easy-to-use magnetic mounting plates. This makes them easy to position in a lot of places you can’t put an ordinary puck light.