If you’re managing a fleet of computers, you might find that you’re copying the same data a lot. For example, you might have a standard image for hundreds of employees or students. In that case, installing via disc is a complicated, time-consuming process. Much better just to duplicate the same hard drive. Duplication, often called cloning, is the process of directly copying an entire drive image to another drive. This lets you set up a computer one time. Then, for other identical systems, you can simply image a new drive. Instead of spending hours configuring each computer, you’re spending only a few minutes.

Of course, there are other reasons you might want to duplicate a drive. For one thing, cloning is the most efficient way to back up all your files at once. This saves you the trouble of deciding which files to back up, remembering all the folders, and so on. Since you’ve copied the entire drive, all of your files are going to be safe. Thankfully, there are many popular cloning solutions available on the market. But you need to choose the right type. You need one that will work with your specific drive, and it needs to perform up to standard. Otherwise, you might as well be transferring your data with a thumb drive.

Today, we’re going to review three of the best M.2 NVMe SSD duplicator cloner docking stations around. We’ll begin with the Yottamaster M.2 NVMe Cloner Duplicator. This is an extra-powerful duplicator that also works as a portable enclosure. Next, we’ll check out the ACASIS M.2 NVMe Duplicator. This is a vertical aluminum cloning base that also works as a temporary docking station. Third, we’ll examine the MAIWO K3016S m.2 SATA Docking Station. This is a much more affordable duplicator, which is made of plastic, but still capable. Which one is the right choice for you? Let’s take a deeper dive, and see what we come up with. 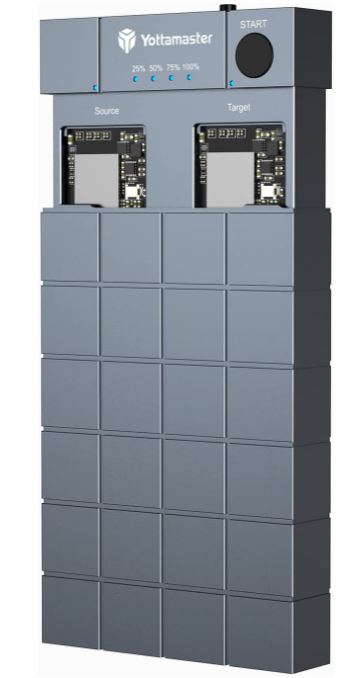 The Yottamaster M.2 NVMe Cloner Duplicator is a hybrid unit that doubles as a portable enclosure. It’s constructed from aluminum, which is designed to help dissipate heat. The design is flat and open, and you simply lay your M.2 SSDs into the tray and plug them in. This is just fine for ordinary data transfer. But what if you want to use it as an enclosure? In that case, the cover slides and snaps easily into place. It even has thermal pads on the inside, to keep your drives from overheating. Not only that, but there are a pair of removable plastic fasteners for securing your drive in place. These keep them from getting damaged due to vibration, or popping out prematurely. 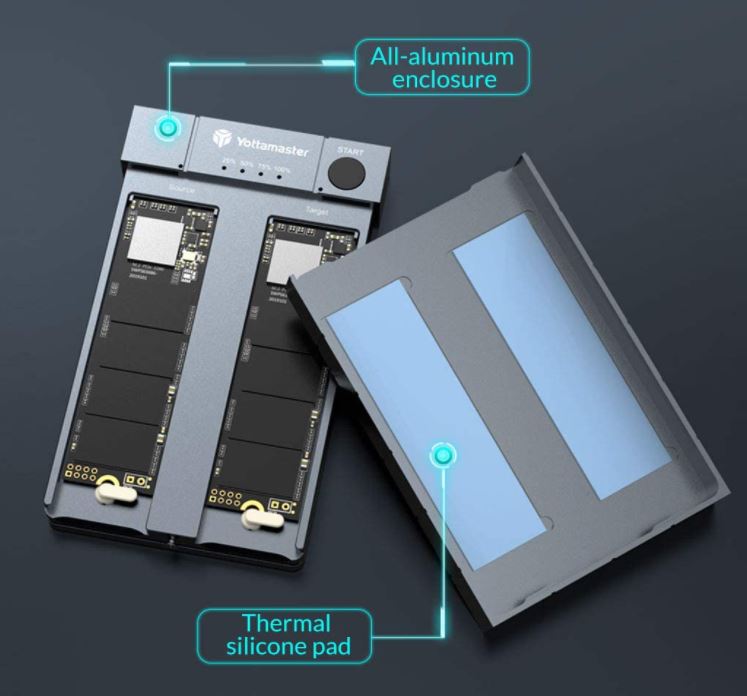 On the top surface, just in front of the opening, there’s a single button, labeled “start.” You’ll also notice that the two drive slots are labeled “source” and “target.” When you press and hold the start button, the source drive will be copied to the target drive. Make sure you know which is which. Any existing data on the target drive will be lost, so you don’t want to get your drives mixed up. Once the transfer starts, an LED will light up next to the start button. Additional LEDs will illuminate when the cloning process reaches 25, 50, 75, and 100 percent. 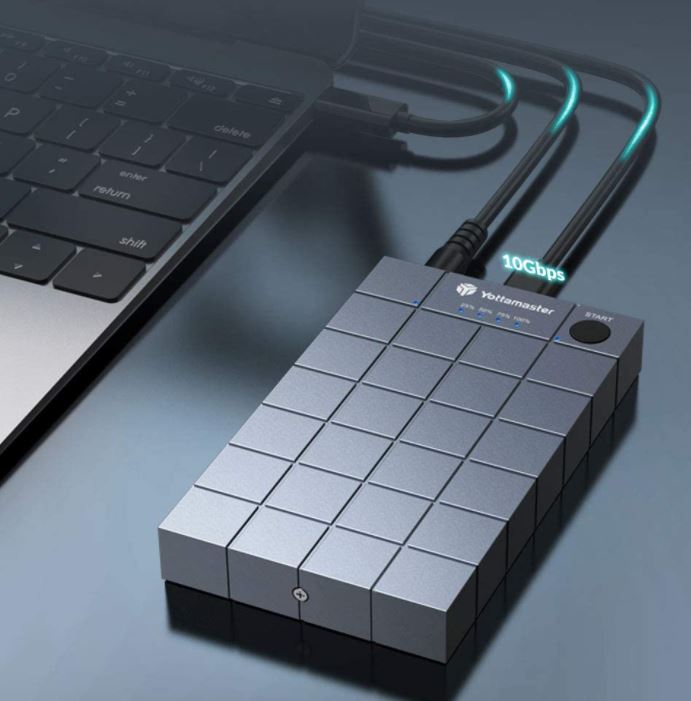 The drive slots themselves are very large, and can accommodate any M.2 NVMe SSD length. As long as it will plug in, the duplicator will successfully copy your data. This is also true for almost any SSD capacity. In fact, the Yottamaster cloner will copy up to an 8TB M.2 SSD. Those are some of the most bleeding edge drives on the market, and are very expensive at the moment. By the time even high-end gaming PCs use a larger drive, you’ll be using a different connection type altogether. Compatibility with your computer is a non-issue. This duplicator works with any Windows, Mac, or Linux system. 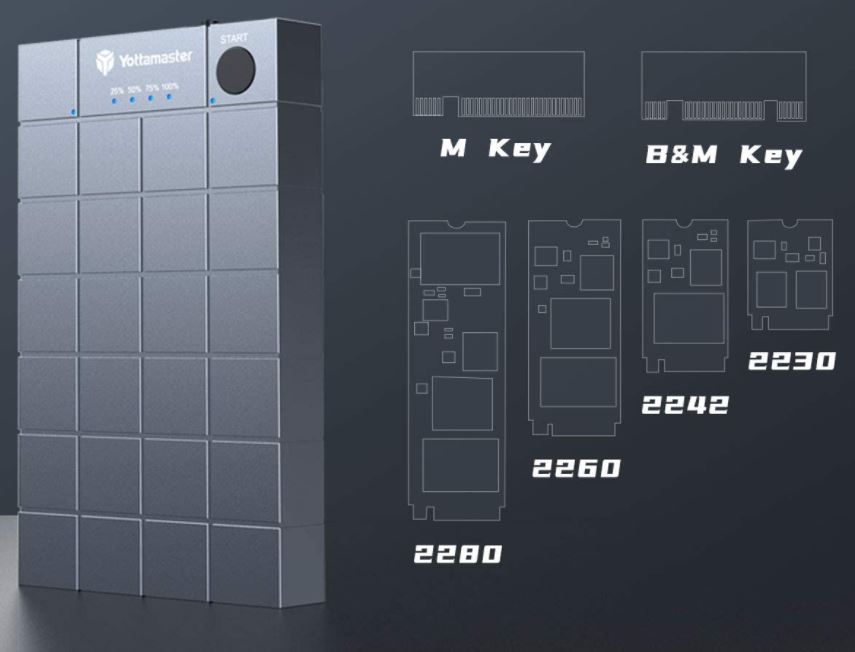 When cloning a drive inside the docking station, you’ll get a transfer rate of 10Gbps. That’s enough to copy a full, 1TB hard drive in about 40 minutes. And in practice, you’re probably not going to be cloning a drive with that much data. The kit includes a power supply, so you don’t even need a computer to clone your drive. You can plug right into a wall outlet and start copying. You also get five adapters, for North American, EU, UK, Japanese, and Chinese power outlets. All of this is covered by a generous 18-month manufacturer’s warranty. If it fails for any reason, you’ll get a refund or replacement.

If you’re copying data to or from your PC, your performance will depend on how you connect. The fastest way is to use a USB Type-C to Type-C cable. This will get you 10Gbps of data transfer – the same as cloning a drive inside the dock. However, you can also use the USB Type-C to Type-A cable. This will allow you to plug into older computers that don’t have a Type-C port. However, you’ll get slower rates of data transfer, depending on the port. Both cables are included in the package. 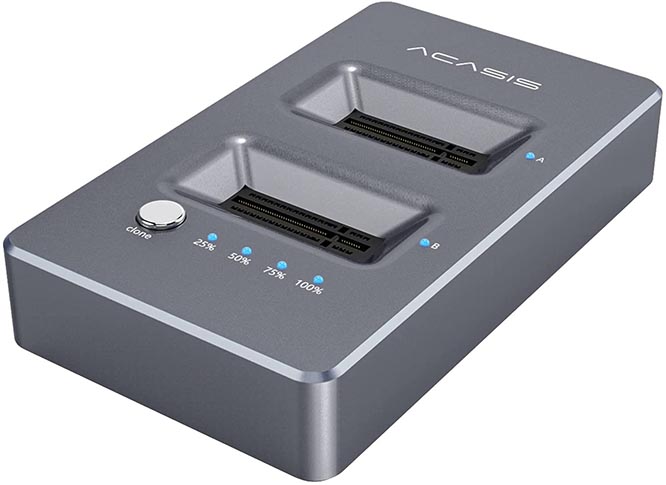 ACASIS is a manufacturer we’ve reviewed in the past. Not long ago, we reviewed their USB Type-C M.2 SSD Enclosure. The ACASIS M.2 NVMe Duplicator has an entirely different design altogether. Instead of being built as an enclosure, it’s a base unit with two slots where the M.2 drives sit in vertically. This makes them very easy to insert and remove. You just plug them in, and unplug them when you’re done. That said, when you want to transport it, you’ll need to unplug your drives. 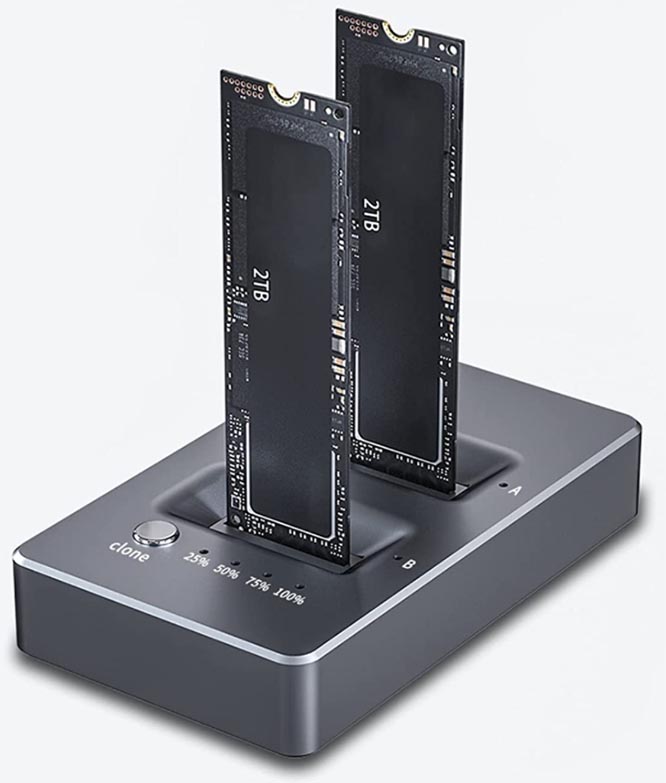 The housing is constructed from aluminum, so it dissipates heat very well. Not that this is a significant concern, since the drives are open to the air to begin with. And because the drives stand on end, the overall footprint is fairly small. It measures only 3.31 inches deep and 1.93 inches wide, with a thickness of just over half an inch. There’s a “clone” button in front of the two drive slots, which works the same as the Yottamaster’s button. Similarly, there are “A” and “B” SSDs, which correspond to the source and the target respectively. There are even similar LED lights at the front, to indicate the status of the cloning process. These light up at 25, 50, 75, and 100 percent respectively. 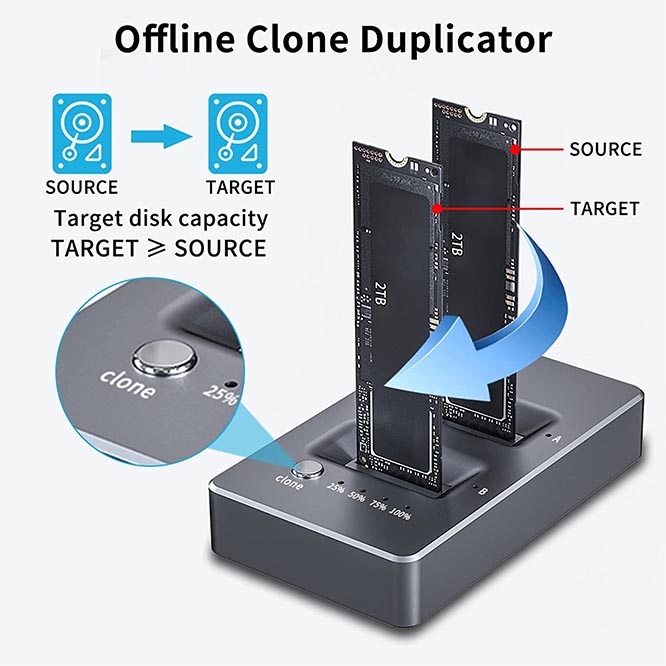 In terms of drive support, you can use any size SSD. There’s no housing for them to sit inside, so even the longest drives will sit. In terms of capacity, the drive can have up to 8TB of capacity. Once again, that’s a bleeding-edge drive, so you’re looking at a future-proof duplicator. And it’s compatible with Windows, Mac, and Linux, so it works well with any computer. 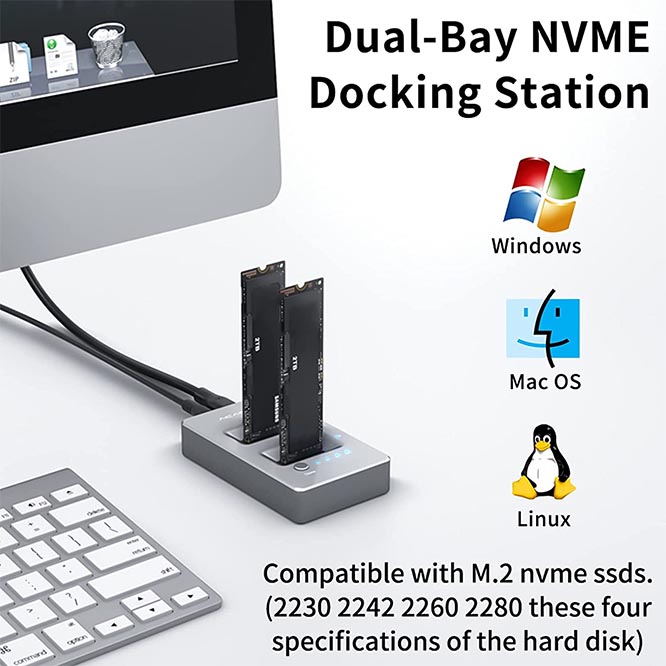 The ACASIS duplicator’s performance is as good as we’d hoped. When you’re duplicating a drive, you’ll get a transfer rate of 10Gbps. That’s the same as the Yottamaster duplicator, and enough to copy even a 1TB drive in under 45 minutes. It also has a separate, external power supply, so it can be used wherever there’s a power outlet. No computer is required.

That said, this duplicator also functions as a standalone docking station. In this mode, it connects to your computer with a USB Type-C cable, which is included. It will transfer data at up to 10Gbps, just as if both drives were docked. On the downside, there’s no enclosure. If you’re planning on a long-term docking solution, you’ll be far better off with a dedicated NVMe drive enclosure. 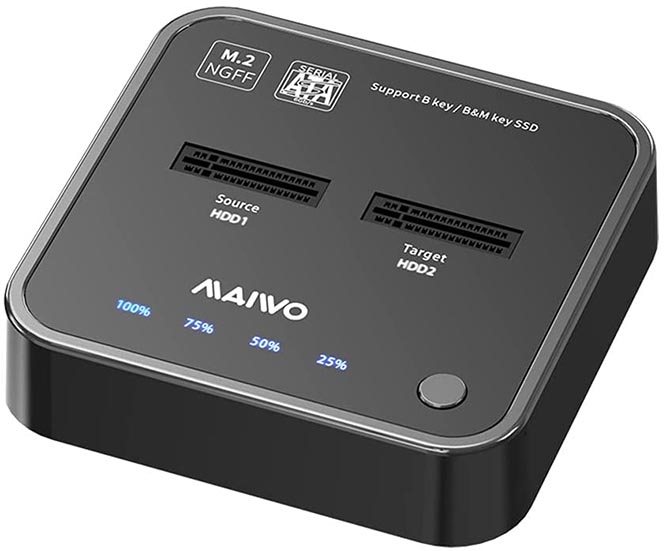 The MAIWO K3016S m.2 SATA Docking Station is a little bit different from the last two. Instead of aluminum, it’s constructed from ABS plastic. On the one hand, this decreases heat dissipation. On the other hand, it also lowers the cost, and heat dissipation isn’t much of a concern. Like the ACASIS duplicator, the MAIWO has a vertical design, where the two drives stand up vertically. The drives plug into two slots, which are labeled “source” and “target” respectively. 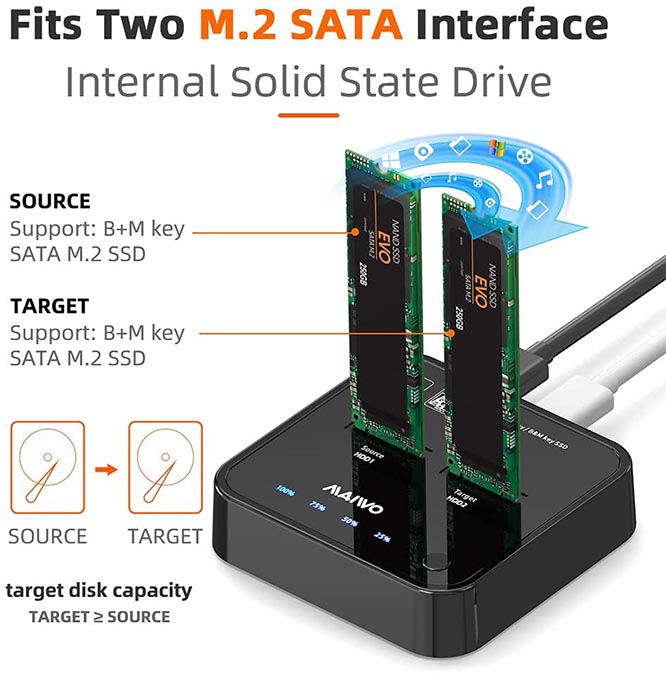 As with our last two cloning stations, there’s a single button, which initiates the duplication process. There are also 25, 50, 75, and 100 percent progress LEDs. This makes it easy to know how long you have left to wait. That said, your copying rate and drive capacity will be somewhat more limited. The maximum data transfer rate is only 5Gbps, rather than 10. Similarly, the drive capacity is only 4TB, instead of 8TB. This second limitation is less of an issue, since even 4TB SSDs are pretty exotic. 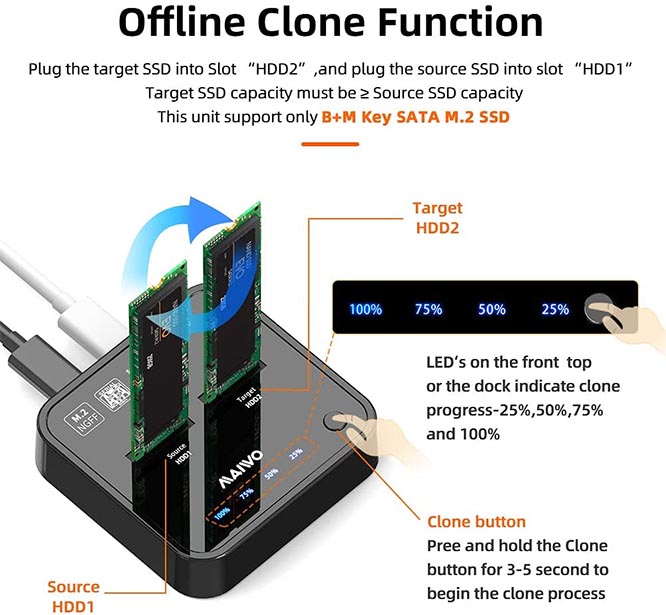 The MAIWO docking station can be used without a computer, using a USB cable and power adapter. The adapter, as well as both Type-C to Type-C and Type-A to Type-C cables, are included in the box. You can transfer data to or from any computer, whether it runs Windows, Mac OS, or Linux. On the downside, it won’t work with all M.2 drives. While the length of the drive is not an issue, the interface is. You can only use M.2 SATA drives, not M.2 NVMe drives.

No matter what drive you’re using, you might also want to consider a quality SSD heatsink. You’ll need one for installing a drive in your computer, regardless of your duplicator.

So, which one of these duplicators is the best choice for you? The Yottamaster M.2 NVMe Cloner Duplicator is the most durable and capable. With an enclosed design, it’s suitable for use as a drive enclosure as well as a simple dock. And it supports blazing fast rates of data transfer, so cloning goes as quickly as possible.

The ACASIS M.2 NVMe Duplicator is equally capable, with similar drive support and data transfer. Its open design makes it a poor choice for long-term docking. But for a convenient, drop-in solution, it’s an excellent choice.

The MAIWO K3016S m.2 SATA Docking Station is a bit slower than the other two, and it’s only made of plastic. It also only supports M.2 SATA SSDs. However, it’s significantly more affordable than the others. If you’re on a budget and don’t need to backup data at ludicrous speed, it works just fine.