The Parallel port, or as you may know it the “printer port,” was in use with computers as early as 1981. The port remained in use all the way until 1996 when it was superseded by the USB standard. If you were using computers in the 90s, you’ll quickly recognize its massive 25 pin socket. The port was widely used as it was very inexpensive to develop hardware for. With 8 input pins, four output pins and an array of control and signal plus, you could just route each pin to respond to a specific circuit. Plus, parallel allowed multiple binary signals to be transmitted at the same time, something that was necessary for many applications due to the slow data transfer rates available at the time.

There were many notable devices that used parallel ports including the Iomega ZIP drive, several of the first MP3 players, Printers, and Scanners. But while all of these devices are, for the most part, obsolete, there are still many devices in service both in the consumer and business sectors.

A perfect example of this is the locksmithing industry. If you want to reprogram new automobile keys, you are likely going to need a parallel port to access the programming tools. CNC machines that may have cost hundreds of thousands of dollars in the 90s would still function perfectly, if it wasn’t for the fact that they were driven by a parallel connection. PID tuning devices used in the industrial automation and control industry require parallel ports. The list could go on.

If you just needed to hook up a printer, perhaps a USB to parallel adapter may work. But USB doesn’t support many of the features used in parallel. Many of these devices require the ability to pull interrupts, access DMA channels, and deliver data on a timed, unbuffered basis. USB simply won’t cut it for these applications.

If you’re trying to get an old piece of hard ware running, you don’t have to worry. PCIe Parallel adapter cards have all the functionality you need. There are a few different requirements, so read on and we’ll explain what these cards work with and how to choose between them.

Syba may not seem like a common brand, but they actually make a great deal of components for use in business environments. While generally sticking to high throughput networking and data storage interfaces, the Syba DB25 Parallel PCIe x1 Controller Card perfectly complements their existing range of products. 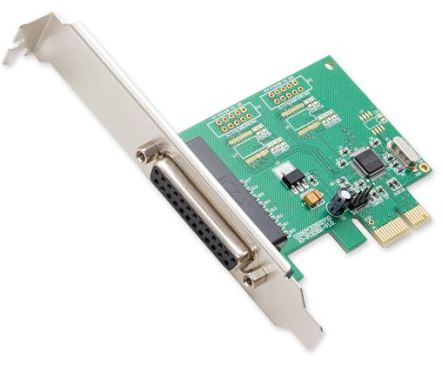 While not the most compact design on the market, the somewhat bare looking circuit board fits perfectly into any PCIe slot. The card will work in any standard ATX or half height ATX case. 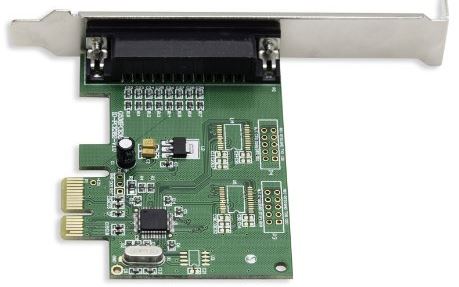 This parallel card is designed to provide basic access to most of the features of the parallel port, and it does this well. D1, D2, D3 hot and D3 cold refer to the low power states can be used by some parallel devices. If these weren’t supported, it may not be possible to “wake” a device once it has entered into a low power state. Fortunately, this card supports every variation of this feature improving compatibility with newer parallel devices.

One of the main problems with the USB adapters is the clock. USB is a buffered communication technology, so information is transmitted in spurts rather than in a consistent stream. This card taps into the 100mhz differential clock of the PCIe bus to create a stable data transmission clock, alleviating all of these issues. 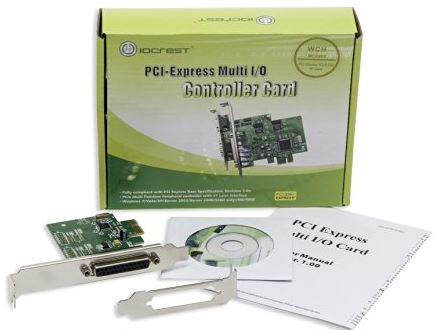 This device will give you a true COM port if you are operating under a DOS environment. This includes use through virtual machines. This means that it will work with many of the devices that came out towards the end of the parallel ports life including MP3 players, communication equipment, data storage devices and more. It’s worth noting that this parallel port will only work with the IBM standard communication scheme, not advanced bi-directional communication extended standards. Confirm if your device is one of the rare few that requires EPP or ECP. If so, it will not work under this adapter. Every other device should work fine.

We have reviewed StarTech’s products many times. From Ethernet Extenders to RAID controllers to Hard Drive Enclosures and more, they seem to make it all. Their products don’t tend to cut any corners. If they make something, it supports all of the intended uses. Their PCIe Parallel adapter card is no different.

Like many internal components, the card is designed to be simple. It goes into any of your PCI express ports, using just a single lane. The card is half height, so it will work even on a compact system. It offers a single parallel port on the back, with the standard mounting screws keeping your connector stable. 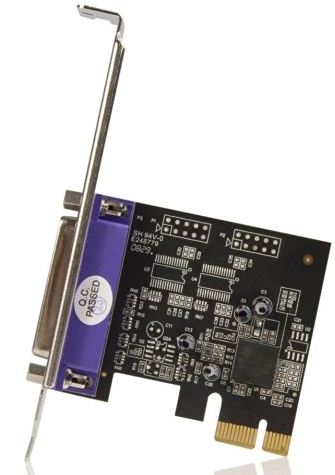 Startech’s parallel port was designed to work with virtually any parallel device that was released. In addition to supporting the correct clock, power saving mode and IRQs, it also supports the extended set of parallel port communications that are not technically a part of the standard. This includes EPP or Enhanced Parallel port. This standard is a high speed bi-directional interface. Due to the limited pins, this works on a half-duplex basis. What this means is that all but one of the data pins are used for transmission, allowing maximum bandwidth. When a signal is applied to the spare pin, the direction flips. This high bandwidth application is used for a number of devices in the engineering, medical, and manufacturing industries. 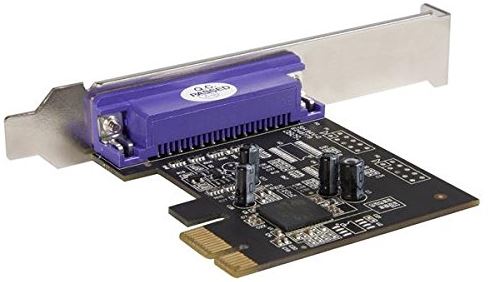 ECP is the other standard supported by this adapter. This stands for Extended Capability Port and works in a very similar manner to EPP. The primary difference is how data is accessed. With ECP, the bus has direct memory access to the ISA channel. This is difficult to replicate in modern computers since the ISA bus is no longer in use. Fortunately, the drivers are well coded and will not only set up a specific register in your computers local memory, but will allocate this memory to the appropriate driver. Legacy software will now be able to access an ISA channel, and should most likely work. If it won’t run natively, it will through a virtual machine.

Thanks to support for advanced standards, there are very few parallel devices which will be inhibited by this card. The biggest challenge is going to be getting the appropriate software running. So If you have the manufacturers program already on your computer, then this card is the missing key to get your legacy hardware up and running.

This card is very similar to StarTech’s previous device, only this time in a compact form designed for mobile use. 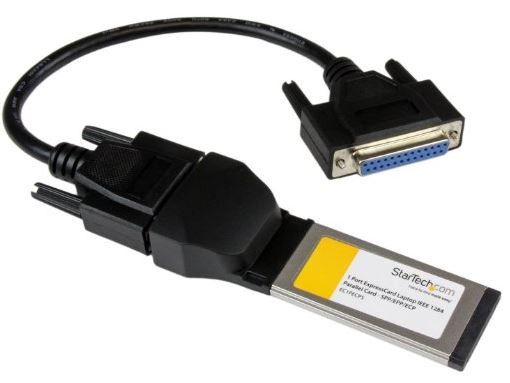 For an express card, the StarTech 1 Port ExpressCard Laptop Parallel Adapter Card is certainly a lot bulkier than what you may be used to. Fortunately, thanks to the port adapter it’s a lot smaller than it could be. If you need a parallel port on a laptop, you won’t get much smaller than this.

Although technically an expresscard device, this could still be categorized as a PCIe parallel adapter. The expresscard format simply acts as a bus that gives direct access to a PCIe lane. So the same chipset StarTech used for their desktop card is also available on mobile form. This means that you can use any devices that require EPP, ECP, or even power saving. 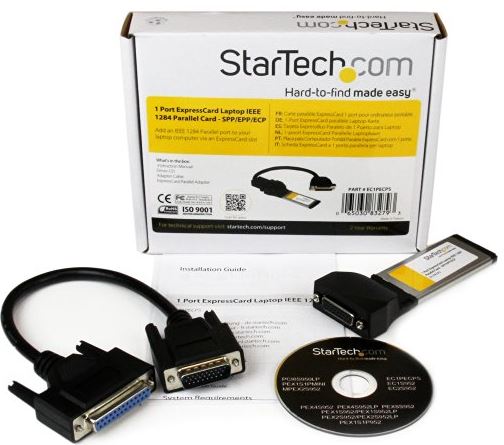 There is one consideration to keep in mind if you are going to use parallel devices with mobile computers. Generally, they do not support the sleep / wake functions that we have built in to modern notebooks. If your laptop goes to sleep, you will likely have to restart the parallel device. CNC machines, for example, might not want to shut off unless you send the required control signals to park the head in the appropriate position. It’s very important to consider what is required to shut down your device, and take the steps to do so before shutting down the computer. Alternately, you can go to the notebooks power settings to prevent it from sleeping.

Thanks to the StarTech chipset, this device is compatible with virtually every parallel device no matter how advanced or simple it is.

So, Which PCIe Parallel Adapter Card Should I Buy?

You’d think that the choice would be simple, but sadly there are still a few considerations to keep in mind. The largest issue with device compatibility was that the Parallel port was never really standardized. In fact, the standard wasn’t even developed until after USB had already replaced it. This means that parallel devices can fit into any one of several different categories. The Type of device you want to connect will dictate which controller you will need.

If you are simply looking to connect an older piece of consumer hardware, the Syba PCIe parallel adapter is likely going to be your best option. Only advanced storage devices use the complex features of parallel technology. Consumer electronics were designed to be as compatible as possible, and often used popular communication schemes to facilitate this. The most common device is going to be ZIP disk readers from Iomega, but you can also connect even older and more obscure data storage such as Syquest drives, 5 ¼ floppies, and proprietary disk storage devices.

Printers, scanners and copiers are both simple and easy to get working with the Syba PCIe parallel adapter. What you may not know is that some of the more advanced media devices will also work, such as video capture devices, MIDI controllers and early MP3 players.

If you are trying to access an old SCSI system, you’re definitely going to need the EPP features used in one of the StarTech products. These drives were designed for, what was considered at the time, incredibly high data bandwidth. EPP allows the drives to streamline the error checking process, so you’ll be able to access your company’s old data without much headache.

Whether you’re working with simple car keys or advanced PLC automation hardware, ECP is an important part of the security measures used by these devices. Only the StarTech parallel cards can connect to this device class.

For things like receipt printers and barcode scanners, you can save a few dollars and go with the Syba parallel port card. A lot of these devices read no differently than keyboards or printers, so it’s unlikely you’ll experience any software issues.

This device category can actually be split into two. Older, pre-2000 HAM radio equipment can be used with a standard parallel port, just like the one found in the Syba card. But newer equipment uses parallel only for programming the radio. For programming, you’ll need ECP which can only be found in the StarTech cards.

Remember to Check Your Manuals

If you still can’t figure out which type of card you need, try to dig up the manual for your device online. It should clearly state whether you need EPP or ECP. If the answer is no, you’ll be fine with the basic card. But if this is a feature you do need, check out StarTech’s adapters.