Ever worry that your phone line is tapped? Wonder if the government could be spying on your conversations? The NSA leaks made it pretty clear that there is a lot of data being discreetly collected, but the ability to eavesdrop is certainly not limited to large national agencies.

When you think of somebody being “bugged”, it’s easy to imagine a James Bond style agent pulling a high tech little gizmo out of a secret pocket in his shoe, and discreetly hiding it behind a clock on your wall. When this image was invented for the silver screen, it was nothing but a science fiction fantasy. But if you simply reach into your pocket and pull out your phone, you’ll be holding proof that the technology for wireless bugs is readily available.

From Spy Pens that record live video, to GPS trackers that attach to the bottom of your car, there is no shortage of bugs that can be used to track you. Most of them are designed to be discreet. Some are so compact that they can be hidden in nooks and crannies that you’d never think to check. Others are designed to look like harmless odds and ends you’d already have laying around your home. The variety between bugs is so vast that you’d never be able to visually identify them with complete certainty. But this doesn’t mean that they can’t be found.

If you’re trying to spy on somebody, planting the bug is the hardest part of the job. The last thing that anyone would want is to have to sneak back and retrieve it, so most are designed with one common component – wireless communication. By sending the data wirelessly, it’s possible to spy on somebody in real time. But it also means that we have a way to find out if you’ve been bugged, and track where it is.

In this guide, we’re going to take a look at the three best RF bug detectors on the market. We’ll show you how they’re used, and find out what kinds of bugs they can detect. After, we’ll help you decide which option best fits your needs.

Sometimes simplicity is key. iProtect designed this wand to enable you to do “sweeps” of an area and see if there any bugs. It’s completely up to date and detects all modern bugs, but is so easy to use that even a total beginner can pick it up and start sweeping.

The iProtect Wireless Signal Detector Wand is made from a very thick plastic, and fits comfortably in your hand. A small cap at the bottom can be removed to install the two AAA batteries that it runs on. There is a single 16-segment LCD bar graph on the front, which shows you the strength of any detected frequencies. It also vibrates and produces audio, giving you many ways to find bugs.

Ever go through airport security? At one time or another, you’ve probably seen somebody use a wand metal detector. This wand works exactly the same way. Just hold it in your hand, sweep it over an area where you think a bug might be placed, and wait to see how much signal is detected. 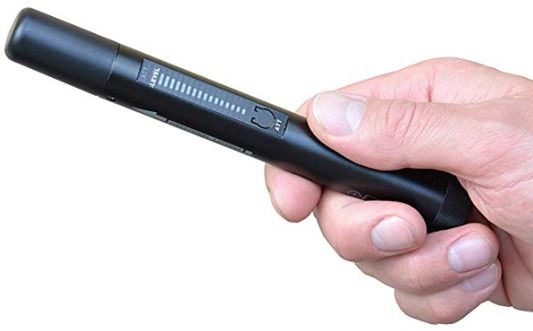 You’ll see the 16-part bar graph start to light up when you move past a signal source. In the higher power ranges, you’ll also feel it vibrate and hear a high pitched tone emit. This helps you physically pinpoint where any bugs are located, making it the easiest way to track them down.

This RF signal detector picks up both digital and analog transmissions on the 50 Mhz to 6Ghz range. This is enough for almost all modern communication equipment. Any GPS, 3G, or 4G hardware will be detected, as well as analog radios.

The range is very small, but in this application that’s ideal. When a signal is detected, you’ll know it’s within 1 meter of the wands current location.

Designed to be simple to use, the Spy-Hawk Pro takes you standard RF bug detector and modernizes it for an increasingly digital world. This model can detect many more types of bugs, but can still be used by amateurs. 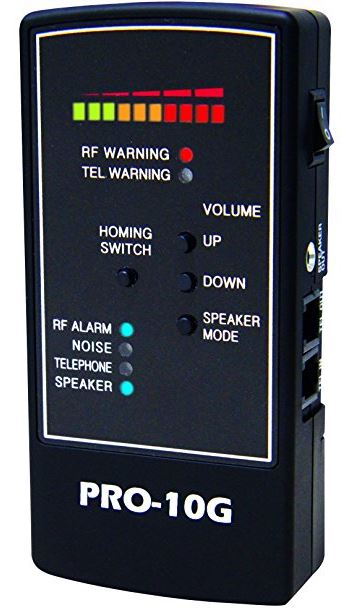 Design wise, the Spy-Hawk Pro-10G looks more like a stud finder than an RF signal detector. All of the buttons and switches can be intimidating at first, but we quickly learned that it was very simple to use.

On the right, you’ve got a pass-through telephone port to connect your landline, and a speaker output. The power switch is on the top, and all the indicators are on the face of the Pro-10G. The enclosure is made from plastic, but the durability was still above average, so this didn’t concern us too much. 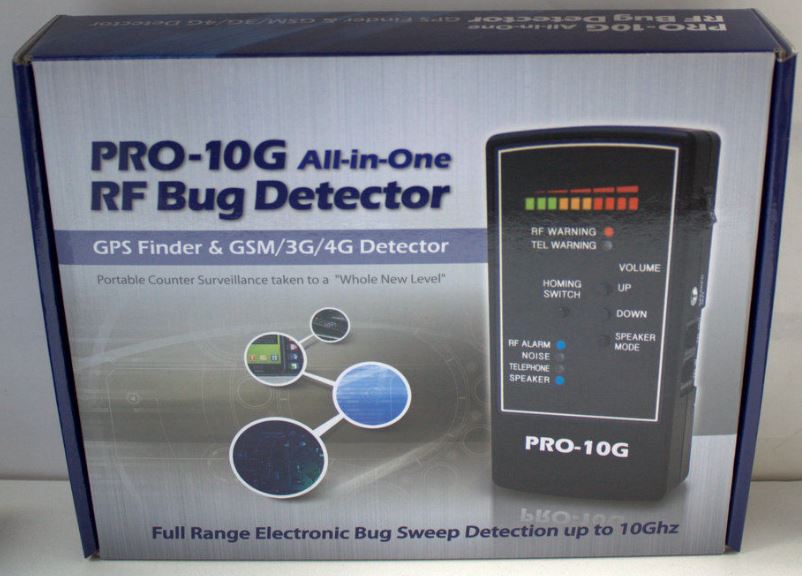 The main thing you have to pay attention to is the large bar graph at the top. When in the green, the detected signal is low. When in red, it’s high. This detector automatically adjusts, so you don’t have to mess with sensitivity on your own.

You can plug in a pair of headphones and listen to the noise directly. There are volume buttons that allow you to tweak how loud it is, which acts as a form of sensitivity for the audio output.

One of the unique features of this detector is its ability to detect not only wireless interference, but over a phone line as well. You can plug in your phone line through this detector, and it will tell you if your line is tapped or not. Wiretaps interfere with the natural signal path, and this is one of the only ways to find them.

You can also use the “homing” switch, which attempts to replace the signal strength bar with one that estimates your distance from the transmitter. It works great with a single source, but when there are too many signals in one place it doesn’t work all that well. 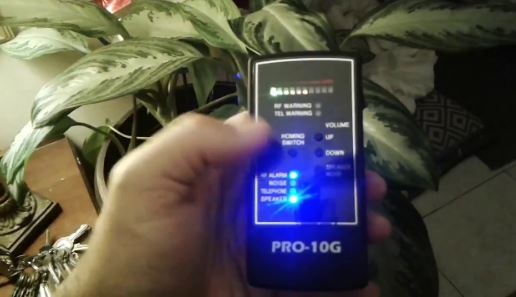 This RF Bug detector tracks anything on the RF frequency, all the way up to 10 GHz. This means that it will have the most comprehensive coverage, identifying even high-tech bugs.

However, you do need to remove as many sources of RF interference from the picture if you want to properly tracks bugs. The Spy Hawk Pro 10G will detect your wireless router, your cellphone, any smart devices in your home, and even your microwave.

As one of the classic bug detectors, this is one of the first things that comes to a professionals mind when they hear the phrase “bug detector.” This type of hardware has been used by private investigators and police officers for years, and is a great starting point. 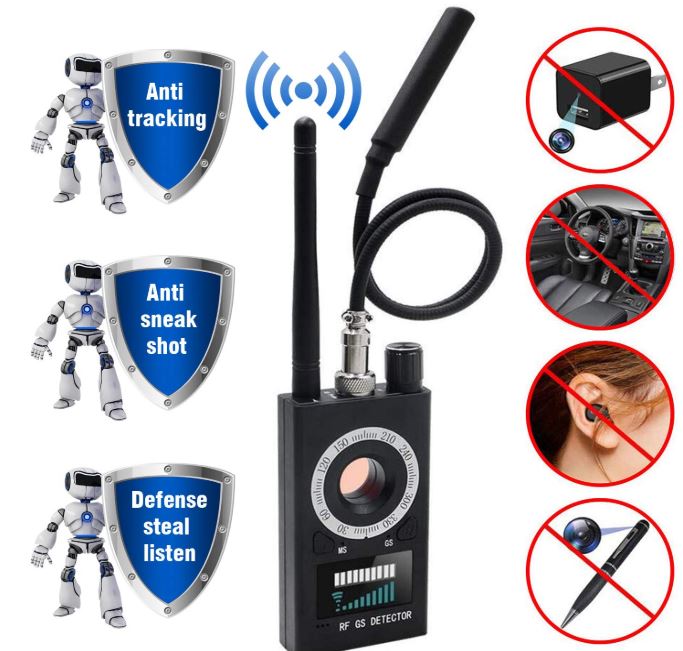 The design couldn’t get much simpler. The Sherry Anti Spy Detector is a black box that’s compact enough to hold in your hand. On the face, you’ve got an LED to indicate power state, and a switch to control vibration. There is a sensitivity knob on the top, and an antenna right next to it.

There are many models that look just like this. It’s the classic, and a highly functional design. But there are a few reasons we chose this model over others. The first is build quality. It’s made from anodized aluminum instead of cheap plastic. This is something that can withstand a ton of use and abuse, so you don’t have to worry about being gentle.

We also like the fact that a powerful antenna was used. This is the same BNC-connected antenna used on police radios, and many consumer VHF transmitters and receivers. If you want a more sensitive one, or to replace a damaged one, finding a compatible antenna will be simple and affordable. 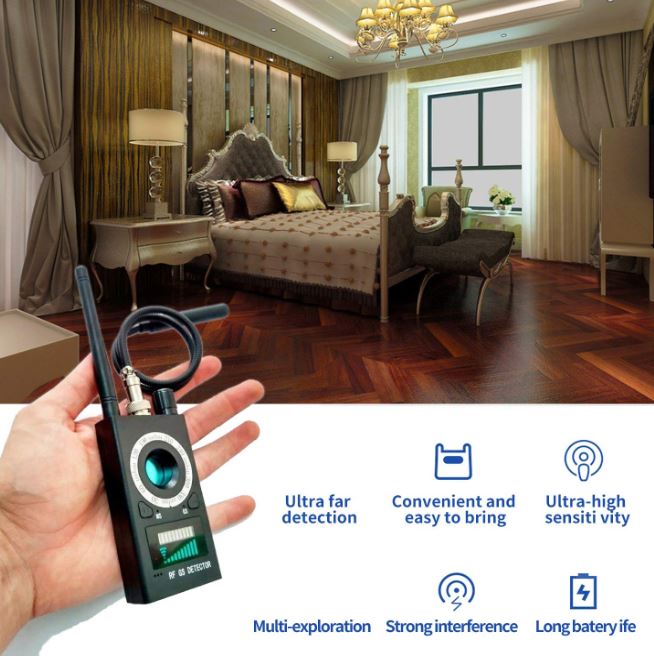 Using the Sherry Anti Spy Detector is simple. First, plug it in and charge the internal battery. Then, turn it on and keep the sensitivity low.

There are three ways that you’ll see the measured RF signal. The easiest is the LEDs on the front. These are just like the signal bars on your cellphone. One LED means low power signal, maximum LEDs means high power. Alternately you can turn on vibration to feel it pulse when a signal is detected, or put headphones in and listen to static that increases in volume as the signal strength increases.

The trick is to turn up the sensitivity until you get a minimum reading. Then, walk around until you see it go up. The idea is to treat this like a game of hot/cold. Keep moving towards the source of the signal, to pinpoint exactly where it’s located. 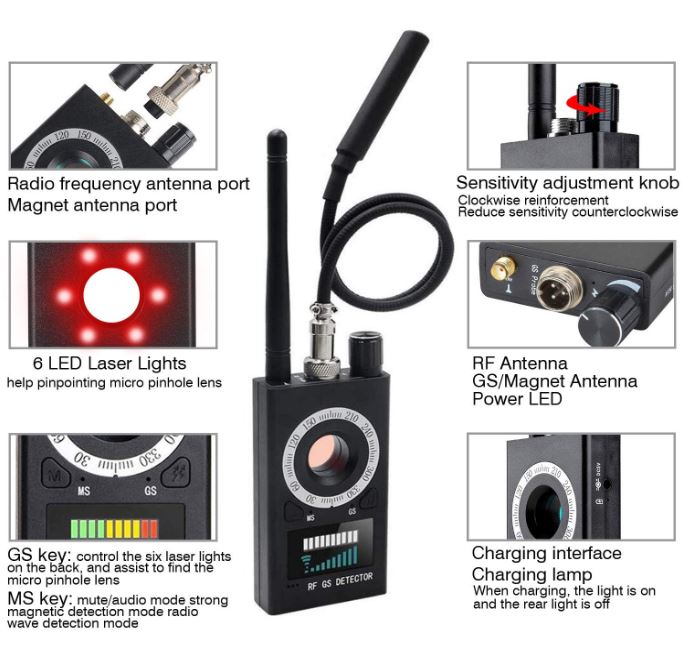 This is one of the most popular RF but detectors, but it’s not the most advanced. It can only find analog RF bugs. Anything that broadcasts short range on the 1.2G to 5.8G frequency range. These kinds of bugs are still very common in police enforcement.

In essence, anything that broadcasts audio over a short distance can be found with this bug detector. You’ll get false positives on baby monitors, cordless phones, and FM transmitters. If you suspect somebody is nearby listening to your conversations, this is the bug detector to get.

Which RF Bug Detector is Right for Me?

Whether you’re considering becoming a private investigator, or just trying to make sure that nobody is spying on you, one of these RF bug detectors is the best way to protect your personal privacy. Depending on what you’re trying to do, one of these options may be better than another.

Are you seeing a shady white van parked outside your house? Worried that somebody nearby might be listening in? If that’s the case, it’s likely that you’ve been bugged with an analog transmitter. These are common in law enforcement, and require somebody nearby to receive the signal. In that case, the Sherry Anti Spy Detector is the best way to track them down. Since it only works on analog signals, you’re not going to have to waste any time accidentally tracking down your home router.

Want to do a sweep for all bugs, both modern and digital? The iProtect Wireless Signal Detector Wand is the one for you. It detects both analog and digital signals, making it extremely comprehensive. Any bug that gets within 1 meter of this wand will be detected, making it very easy for you to track them down.

Looking for the most sensitive option on the market? The Spy Kawk Pro-10G is our choice. It covers a massive range, and can find both analog and digital transmission sources. You can check to see if your phone line is tapped, and measure the total RF emissions of every device in your home.

This model is a little harder to use than some. Since it measures everything, you’ll see a pretty high reading right off the start. You’ll have to turn off your phone, router, and all smart devices if you want to track only bugs. But as long as this isn’t a hassle for you, there is nothing as sensitive as this model.