If we’re talking about lighting technology, candles are about as ancient as it gets. Since as long as people have been writing their words, they’ve been using candles to brighten up the night. But with the advent of electric lighting, candles became obsolete. Who needs a dangerous open flame when an electric light will get the job done safely?

At the same time, candles can evoke a sense of nostalgia or formality. Go to a fancy restaurant, and there’s likely to be a candle or three in the centerpiece. An LED candle can provide a similar ambience without the need to work with an open flame. If the candle is battery-powered, so much the better; it’s as portable as a real candle!

Today, we’ll be reviewing five of the best battery-powered flameless taper candles we could find. Before we get into the details, here’s a quick preview:

Of course, we’ll have to look a lot closer before we can deliver a fair verdict. Let’s put these candles under the microscope, and see what we find! 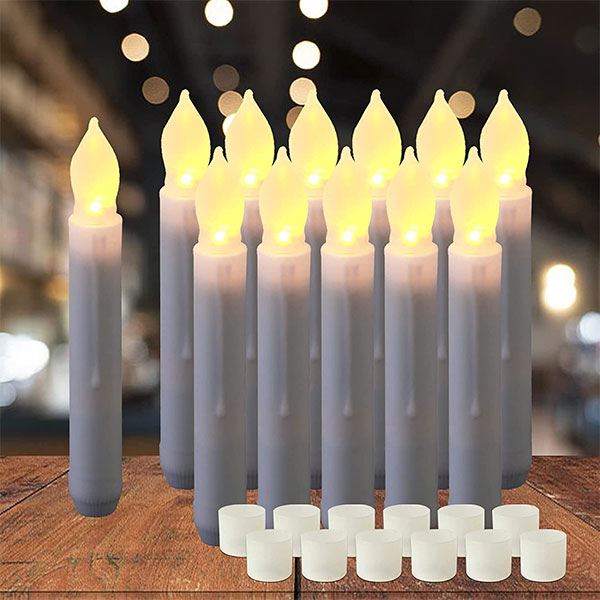 The Amagic White Flameless LED Taper Candles come in a 12-pack. These candles have a diameter of 0.79 inches, and a height of 6.5 inches. That’s a little bit short, but it’s by design. The white plastic is molded with a bunch of fake drip trails, so it looks as if the candle has burned partway down. The flame-shaped bulb gives off a warm white glow, which has a realistic orange-tinged hue. 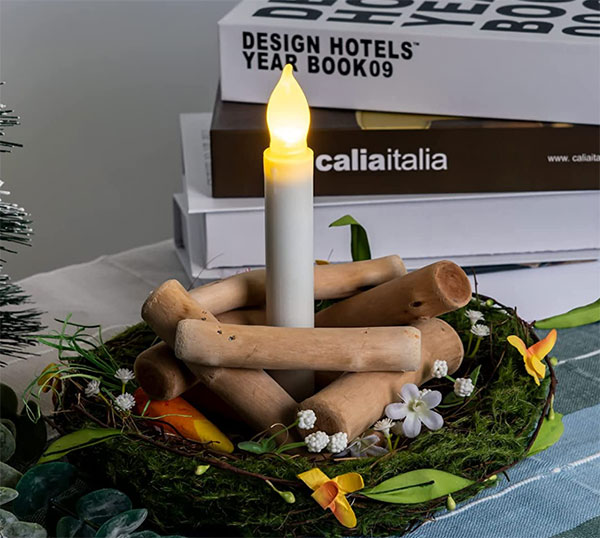 The bottom of the base is slightly blunted, which creates the perfect shape to fit in a standard candlestick. The kit also includes a set of flat-bottomed caps that can fit right over the bottom. These allow you to set up the candles in a freestanding fashion. Another alternative is to wrap the end of a piece of fishing line around the bottom of the bulb. This way, you can hang the candles around a room and they’ll appear to be floating. 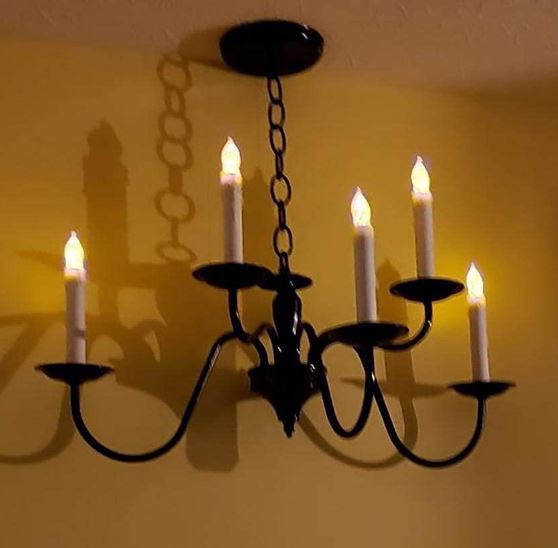 It’s worth noting that there’s an alternate version of these candlesticks. Amagic offers a 6-pack that has an amber bulb instead of a soft white. This version also includes a set of faux-bronze candlestick bases to make them easy to put on display. 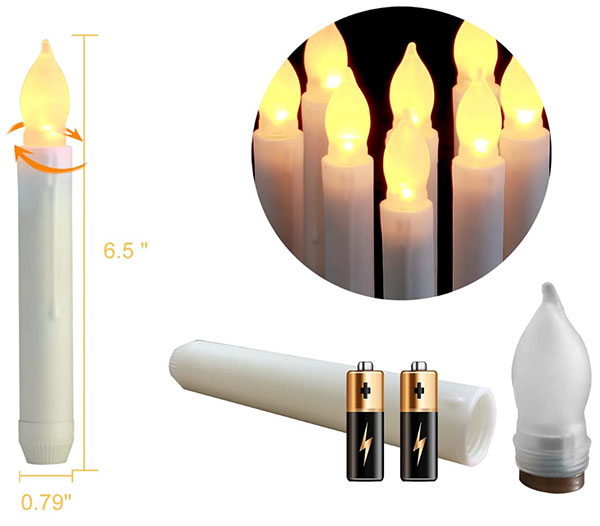 Each candle takes a pair of AA batteries, which aren’t included in the package. To install them, simply unscrew the bulb and drop them into the housing. Then screw the bulb into place and the bulb will immediately light up. You can order an optional remote to provide a little more control. It’s a slim little controller that takes a watch battery, and has a set of on/off buttons. 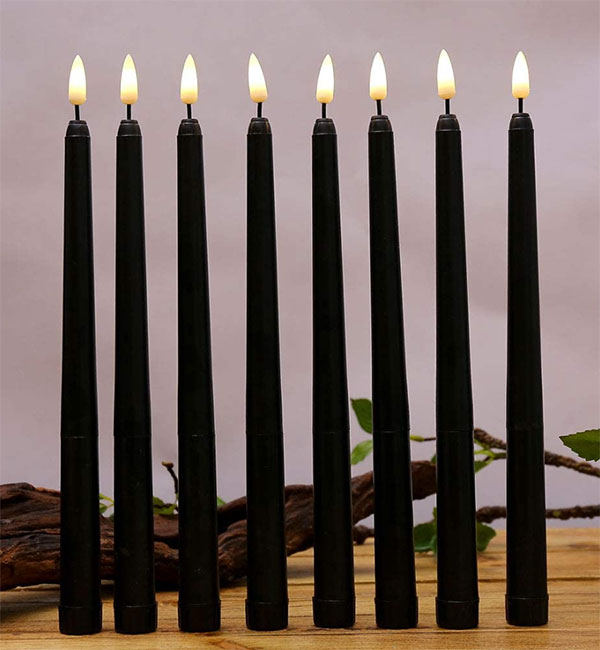 The Datomarry Flickering Flameless Taper Candles also come in a 12-pack. However, they’re designed more to simulate a candle that has just been lit. They’re 11 inches tall, with an 0.8-inch base that tapers to a much more narrow tip. Instead of a fully recessed bulb, there’s a fake wick with a flame-style flickering LED on top. The candles are black, with smooth sides that look brand new. The flames themselves can be warm white or yellow depending on which version you order. 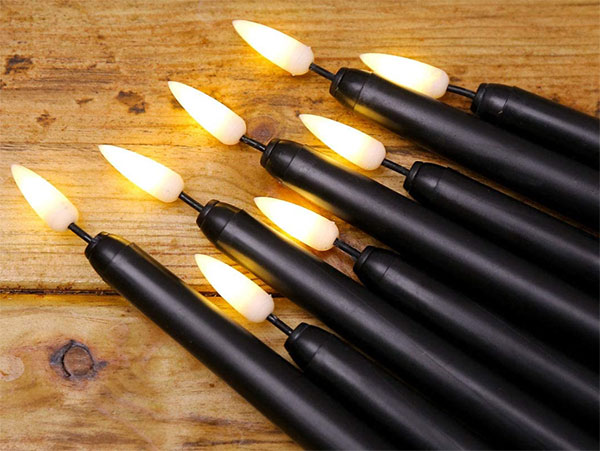 These candles have a flat base with knurled edges. They’re capable of free-standing use, but they’re liable to tip over unless they’re sitting on a stable surface. Ideally, you’ll want to use them with a candlestick. 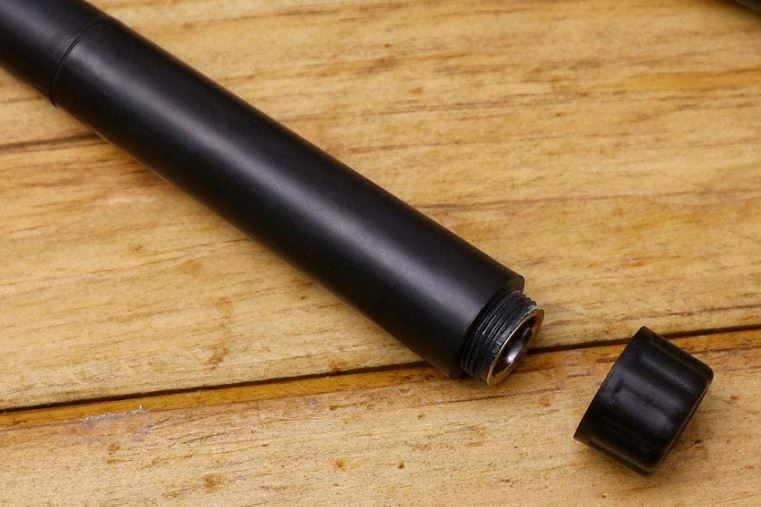 Operation is as simple as it gets. Unscrew the base and insert a pair of AAA batteries into the housing. Then screw the base tight until the bulb starts to flicker. There’s no remote control. When you want to turn the candles off, just unscrew the bases and remove the batteries. That’s all there is to it. 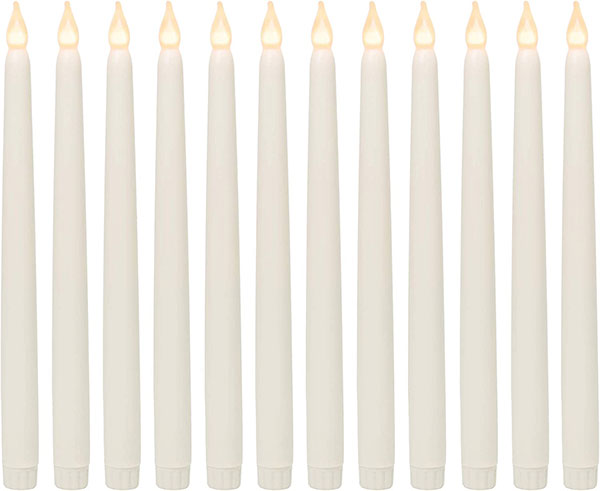 The WYZworks LED Taper Flickering Flameless Candles are available in either a 12-pack or a 6-pack. They’re made from an ivory-colored wax with a flame-style LED embedded in the tip. The light emits a warm white light, and flickers while the candle is in operation. The candles are 11 inches long, and taper from a 0.88-inch base to a little over half that at the tip. 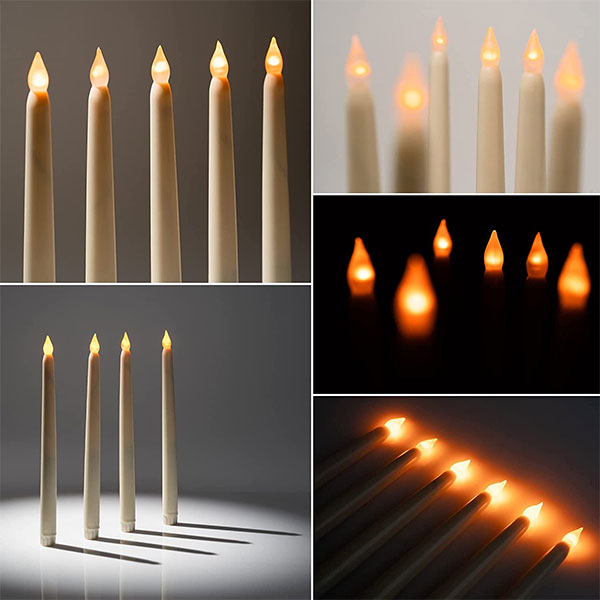 As with the last set of candlesticks, the base is knurled, and will fit in an ordinary candlestick. You can use them without a base if you want, but it’s probably not advisable. The operation is also similar. You unscrew the base, then insert a pair of AA batteries. Screw the base back in, and the light will start flickering. Remove the batteries when you’re done and save them for next time. 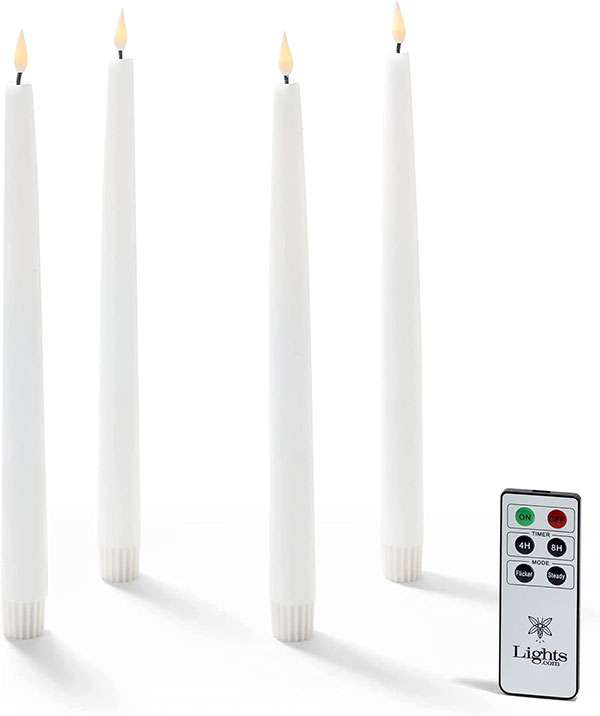 The LampLust Flameless LED Taper Candles are another full-sized taper candle. They measure 0.75-inch across at the base, with a total length of 11 inches. The tip is indented as if it’s been melting away, and LED sits atop an artificial wick. The flame-shaped bulb shines warm white, and flickers when it’s lit. In addition to white, the candles are available in ivory and red. 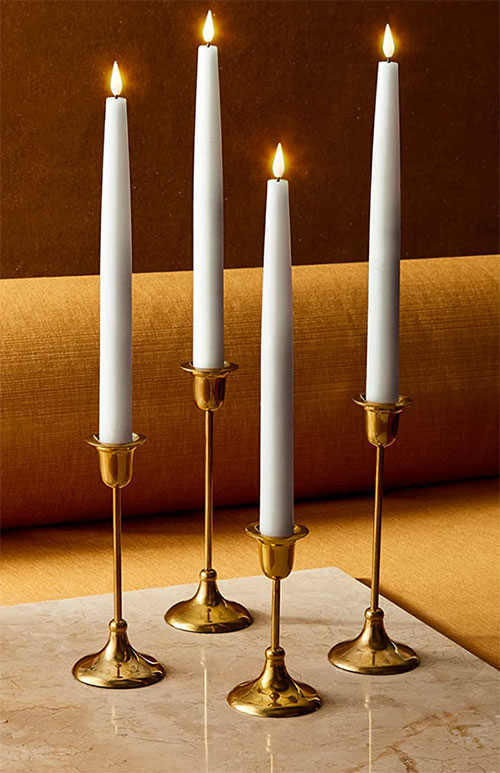 The narrow base of the candle is flat on the end, but we wouldn’t recommend leaving it standing without a base. Unless the surface is very stable, it’s going to wobble. The base unscrews to admit a pair of AAA batteries, and the light turns on automatically. There’s a small handheld remote included in the kit, with on and off buttons and a four or eight hour timer. You can also switch the light between steady and flickering mode. 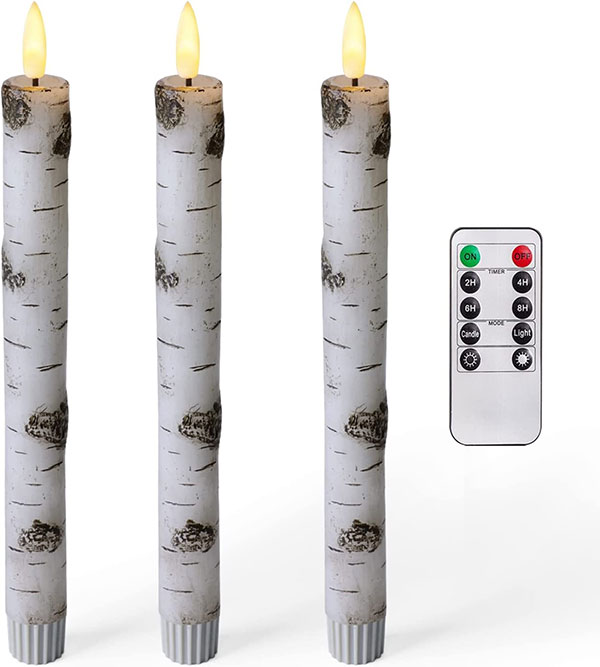 The Homemory Birch Bark Flameless Taper Candles is a simple three-pack. The candles measure 0.78-inch in diameter and stand 9.45 inches high, with no taper to them. They’re styled like birch bark candles, complete with a faux-birch pattern on the sides. There’s an indent at the tip with a fake wick, and a flame-shaped warm white LED bulb at the tip. 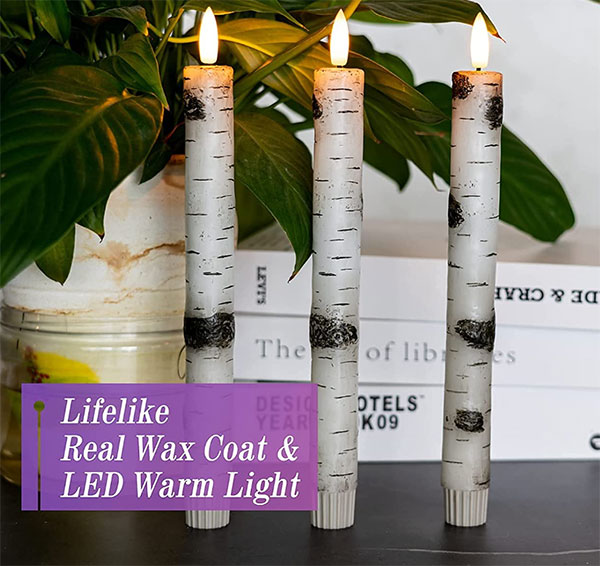 The base is flat-bottomed and constructed from plain white plastic. It unscrews to reveal a battery compartment, where you’ll need to install a pair of AA batteries.

Along with the candles, you get a handheld remote with a number of functions. There are on and off buttons, flicker and steady modes, and a pair of brightness adjustment buttons. You can also set a 2-, 4-, 6-, or 8-hour timer.

Homemory is a company that specializes in fun LED lighting. Not long ago, we reviewed their Halloween LED pumpkin lights, which come with a full-featured remote. So when we went looking for taper candles, their name came to mind.

Now that we’ve looked at all five of our options, let’s address the elephant in the room. What makes one battery-powered flameless taper candle better than another? There’s no single factor that would put one ahead of the pack. Instead, here are a few features you should be looking at.

At the end of the day, LED candles should be simple to use. They should require a ton of setup time or a steep learning curve. A simple on/off switch or even an always-on design is perfectly acceptable. At the same time, some people prefer to have more features. For example, a timer mode can be great when you don’t want to leave the candles lit all night.

Along the same lines, the batteries should be easy to replace. LED bulbs are very efficient, but sooner or later, you’re going to have to replace your battery. This shouldn’t require a screwdriver or a degree in electrical engineering. That’s why all the candles we chose have simple twist-off battery covers.

LED taper candles aren’t a great source of primary lighting. Ultimately, you’re probably buying them for decoration or accent lighting. For that reason, the aesthetic is crucial. There’s no right or wrong answer here. A candle that one person likes may look horrendous to another person’s eye. Similarly, one design may simply mesh better than another with your existing décor.

One of the most obvious distinctions is color. Whether the candle is white, black, red, ivory, or any other color, it’s going to make a difference. But it’s also important to look at the quality of the finish. Does it look like cheap plastic, or is it at least halfway convincing? Bonus points if it’s made from actual wax.

The LEDs themselves are a different matter. To one extent or another, they’re guaranteed to look fake. But look at the quality of the light, and see if there’s a flickering option. This can enhance the illusion of real flame.

It’s not like your LED candle needs to withstand being run over by a truck. But it should at least be able to withstand a drop or a bump. You want to at least get through the season without your candles getting beat up. It’s worth pointing out that the cheapest candles are always going to be more fragile. It’s usually worth spending a couple of extra dollars. 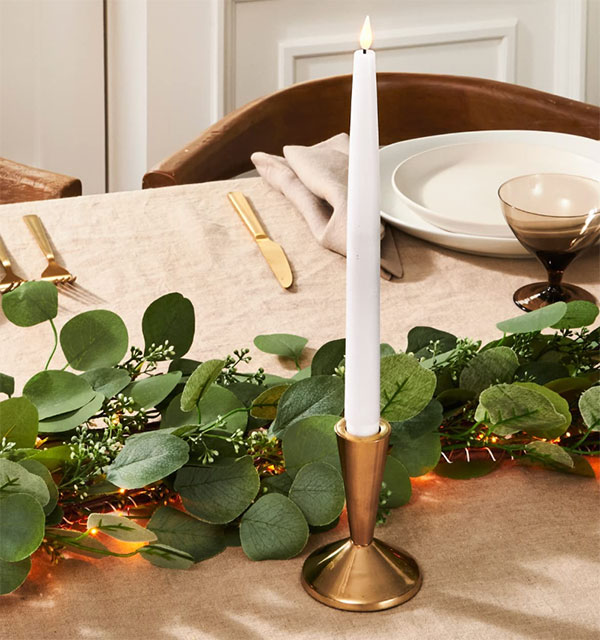 These are all good battery-powered flameless taper candles. But which is the perfect set for your home? Here’s a quick review of what we’ve learned.

We began with the Amagic White Flameless LED Taper Candles. These short candles look like they’ve burned partway down, which makes them feel more dynamic. The base model has no remote, but the remote-controlled version works reasonably well. We also liked the alternate version with the candlesticks and the amber bulbs.

Second on our list were the Datomarry Flickering Flameless Taper Candles. These full-sized candles have fake wicks that suspend the flame above the candle. If you want remote controls, you’ll want to look elsewhere. But if you want the simplest possible operation, it’s a good choice for you.

After that, we reviewed the WYZworks LED Taper Flickering Flameless Candles. These candles have a similar mechanism of operation – just add or remove batteries. However, they’re made from real wax, which makes them look more authentic than plastic candles. There’s plenty to like here.

Next, we looked at the LampLust Flameless LED Taper Candles. This four-pack of candles is available in white, ivory, or a vibrant red, and have a long, tapered design. The kit also includes a remote that allows you to switch between flickering and constant lighting modes.

Bringing up the rear are the Homemory Birch Bark Flameless Taper Candles. These candles have a unique, birch bark-inspired aesthetic that’s sure to catch the eye. We particularly liked the controller, which can adjust the brightness as well as many other things. If you want a more customizable candle, you’ll like this one.