Free charging cables are usually no good. Sure, you can plug them in and they work. But what you really need to be worried about is how long they’ll continue to work, and about the charging speeds necessary to restore your devices to life in quick order.

It’s actually amazing how long it’s taken for right angle cables to catch on. It seems like such a common sense idea, and yet tradition carried forward straight cables for decades. Though every right angle USB-C charging cable may look alike, that’s really not the case. From their durability to their ability to move data, investigating each detail is critical to making the right selection.

In most circumstances, the best outer shielding for USB cables is nylon. It’s smooth to the touch, easy to wipe down, and generally rugged. It allows the wire to bend, but will resist the kind of bending forces that could cause damage to the wires inside. In other words, it’s like putting training wheels on the wire. You can pay less attention to taking care of the wire because it will give resistance whenever you unthinkingly place it in jeopardy. 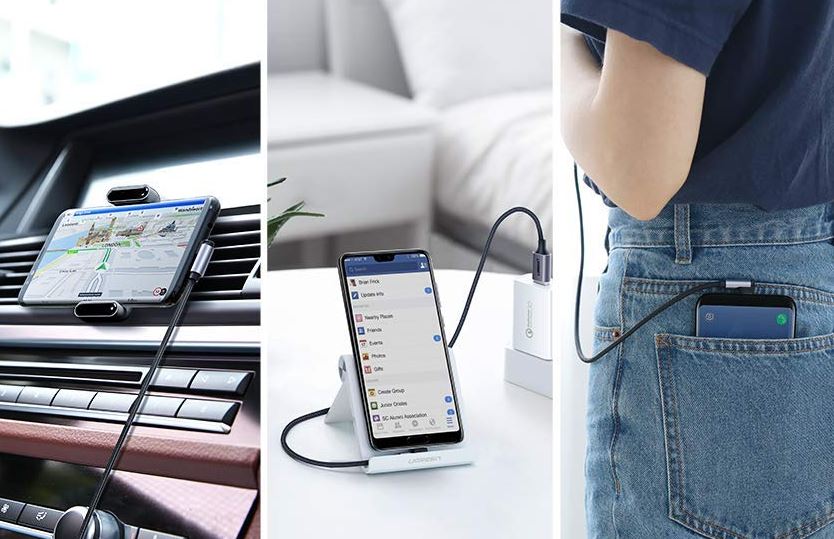 When you receive a free USB charging cable, it’s usually loosely shielded in plastic, and capable of surviving for only a couple hundred bends. If you took the cable and wriggled it around in your hands for an entire day, there’s a good chance it wouldn’t work after only a day or two.

Precisely how long any cable will last depends on any number of factors. But better protected cables make use of multiple layers between the internal wiring and the outside world. Once again, some of the best material for this task is nylon because it’s protective against several different types of forces, including slashing and abrasion. But the internal layers of the cabling can be just as important.

Luckily, you don’t need to start remembering anything about the guts of a cable because there are some concrete metrics which can be used. A decently made midrange nylon cable will be tested to provide roughly 5,000 bends.

Keep in mind, there are differences in durability between nylon cables, even and especially with cables that seem to look the same. Cables made specifically for durability can be crafted to surpass 10,000 bends in lab tests, but you do have to pay a bit extra to get cables built that rugged.

How quickly can the cable fill up your battery? That’s determined by a number of factors, including the power source from which you’re drawing the current. But you don’t want your USB-C charging cable to be the bottleneck of your operation. At a bare minimum, you’ll want to be able to pull 2A from a charging cable. It’s considerably faster than anything lower. 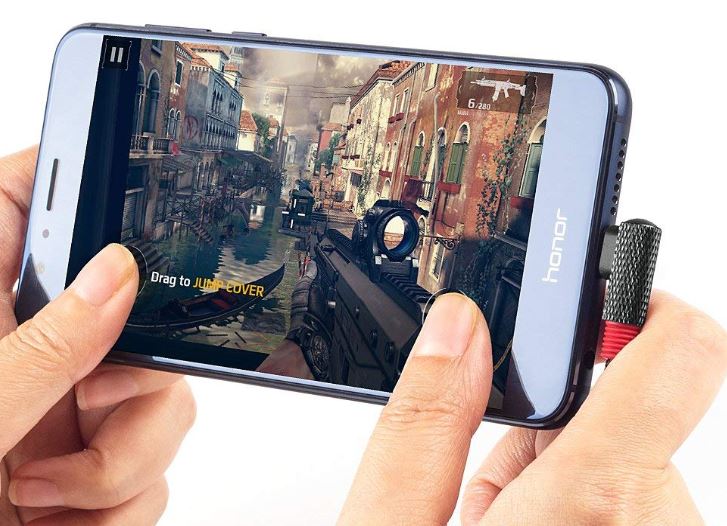 But someone who’s using an especially large battery, like those found within laptops and tablets, you’ll want to consider even faster charging speeds. Batteries with rapid charge features depend on them. Your very best choice would be a 3A charging cable, which can manage battery charge times about a quarter faster than their less formidable counterparts.

If your devices aren’t made to pull 3A current, and are instead made to pull 2A, then having a 3A cable does little besides offer futureproofing.

How far do you need the cable to reach? If you’re using it in a mobile capacity, you’re probably interested in something shorter. If you’re creating something more like a stationary or semi-stationary setup, then you might end up needing a longer cable.

USB-C charging cables are typically built between twelve inches and ten feet. You really have to look hard to find them outside of that range, and when you do, they’re often not worth picking up. 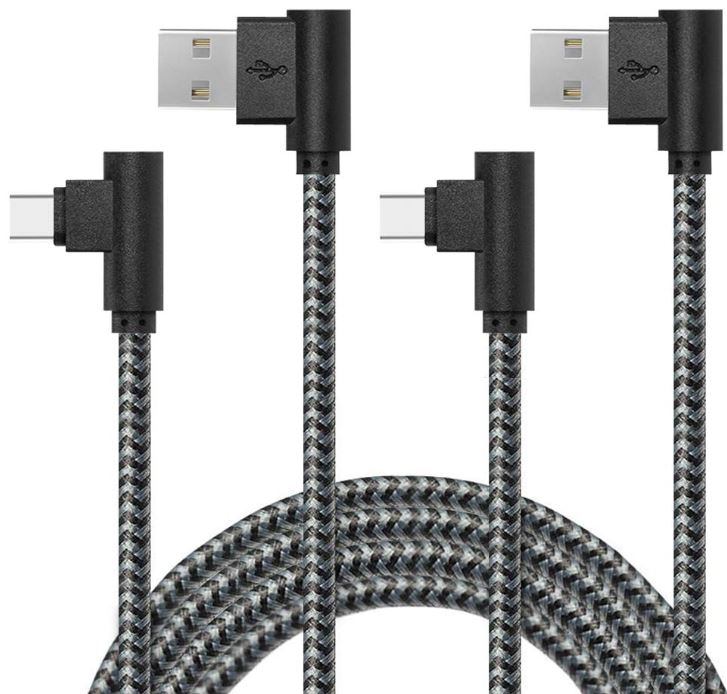 Just plug the APFEN right angled USB-C cable into your laptop, or make use of your own wall charger. It immediately makes your connection more convenient, with its gentle use of a 90-degree angle. That design also helps reduce the strain placed on your cable, which can extend its lifespan.

The APFEN right angled USB-C cable is available in 3ft, 6ft, and 10ft. That kind of variance makes it pretty simple to find the right cable for your current circumstances. Each weighs about half an ounce per foot of cable, so the six-foot version works out to about three ounces. With respect to aesthetics, these cables are available in gray, black, and gray-black. 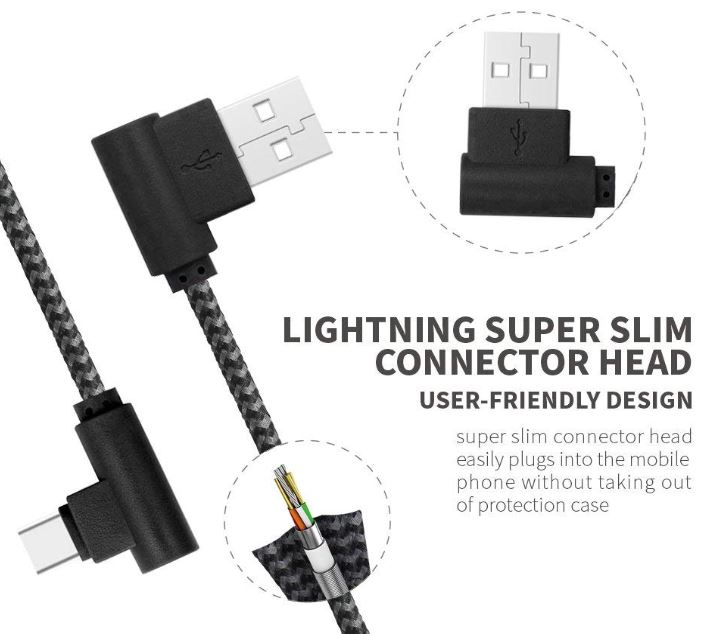 And like their name suggests, these cables terminate in a USB-C connection. Though the wiring itself is simple copper, it’s covered in a braided sheath of nylon, which can also greatly extend the lifespan of your cable. The APFEN cable has an estimated bend lifespan of 5500+. That’s far better than the freebie cables people often use, but it’s actually low-average for a cable of this type.

Each connection header is fairly narrow, which makes it possible to connect to smartphones while they still have a case on. With particularly thick cases, you may encounter some issues with connecting. But the standard sized cases most people use should cause no issues.

With respect to its power output, this cable is capped at 2.1A. That’s close to the maximum amount of current you’re going to be able to draw through one of these cables, while still ending up with pretty quick charging. 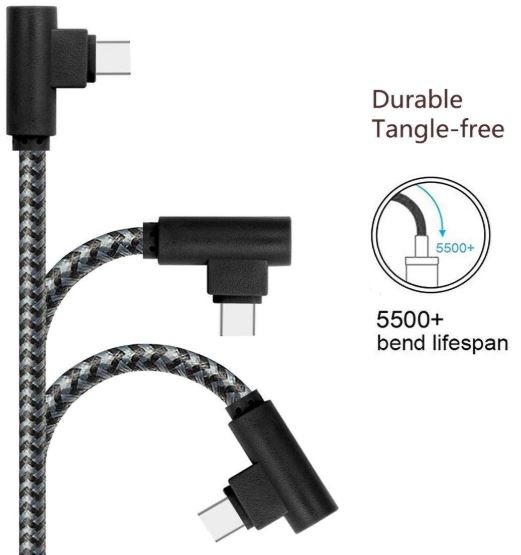 Though APFEN boasts about its data speeds, more than anything, its data sync features are the result of USB-C technologies.

It supports the Galaxy Note 8, Google Pixel, MacBook, and so forth. Basically, any device that has a USB-C port will be able to accommodate the APFEN right angled USB-C cable.

This cable includes one-year warranty. This cable ought to last significantly longer than one year, the warranty should protect you against receiving something that was broken to begin with. 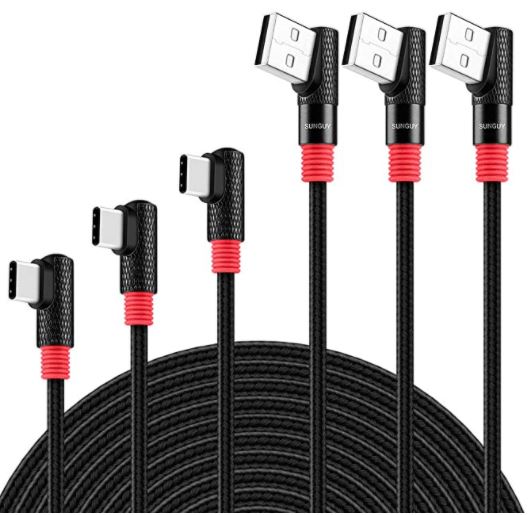 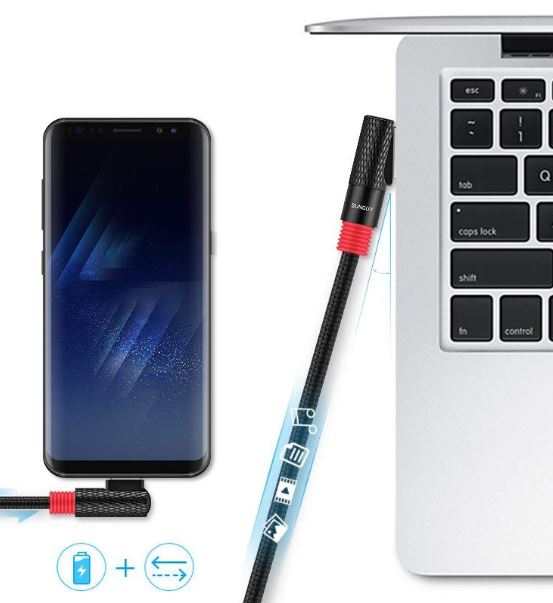 SUNGUY cables are mostly about value. But their inclusion on this list also has to do with size options. There’s actually a total of three size options: 1ft, 3ft and a 6ft version. Though you can get one of the larger cables independently, they’re also bundled together in groups of two or three.

The cable itself is braided in nylon, with both connection ends protected with red plastic bracing. And the SUNGUY right angle USB-C cable can carry 5V/2.4A current, along with all the other strengths inherent to the USB-C format. 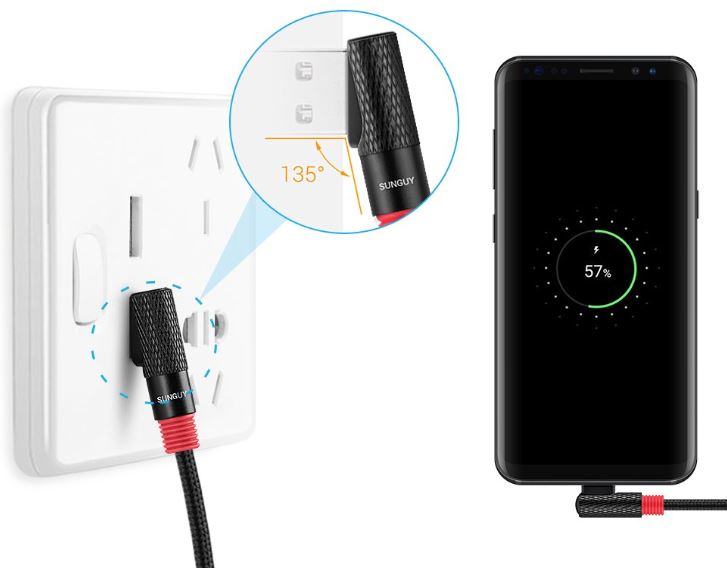 This cable offers support for the Samsung Galaxy series, Note 8, Nintendo Switch, Google Pixel, and so forth. It does not have support for Android Auto, you may want to keep that in mind if you use that feature to connect with your car. SUNGUY offers customer service, through it’s not US based. Additionally, these cables include a one-year warranty. 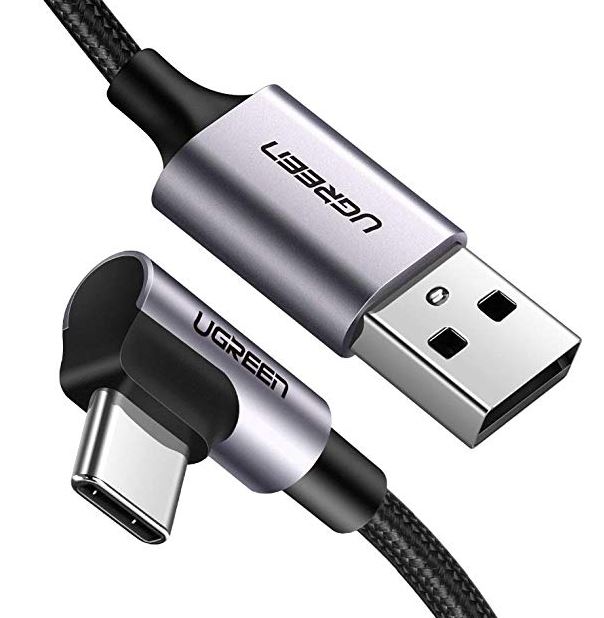 The UGREEN USB-C 90-degree cable is pretty close to being a standard option. The USB-C nature of this device means it’s fully loaded with power, but what really makes this cable special is the quality of its construction.

Though you might not want to take it out into the rainforest for an expedition into the wilderness, short of extreme circumstances, this cable ought to be able to match or exceed your expectations. 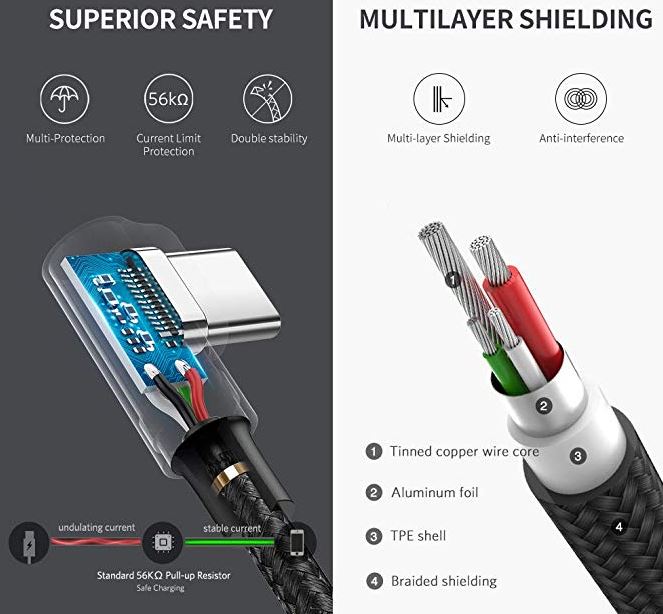 The UGREEN charging cable utilizes a USB-C to USB-C male to male connection. The cabling itself has been triple shielded with aluminum housing, resulting in some of the longest service life you can find from any USB charging cable. It’s made to survive in excess of 10,000 bends, and just as many instances of being plugged into devices.

Like most personal charging cables, this USB-C 90 degree charging cable runs 3-feet in length. And like a right angle connector ought to, it terminates with the USB-C portion of the device using a right angle. Keep in mind, the USB-A connection makes use of a standard 180-degree connection.

The wiring itself is quite something. It supports a 56KΩ resistor for seamless conductivity and a smooth charge, helping to protect your devices from the potential of damage during current discharge. It also means this capable is capable of being used in a wide variety of applications, including some devices that require specialized cables. 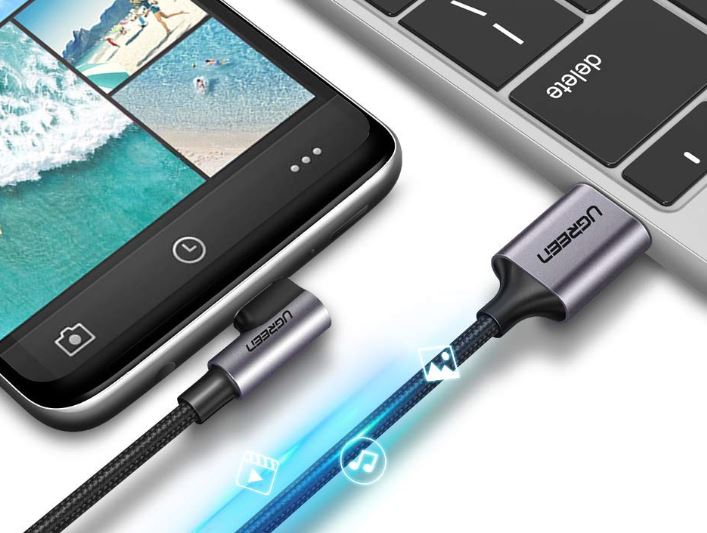 The UGREEN USB-C 90-degree cable is ideal for connecting up with the Samsung S9, LG V30, Google Pixel 3, and just about any other USB-C device that you can name. That includes even power hungry batteries, like those found within DSLR cameras and laptops.

You’ll find devices like cameras among this list because the maximum output of this cable is 3A, providing some of the fastest battery charging that money can buy. It’s also how the cable can support Quick Charge 2.0 and 3.0, allowing you to completely charge a phone like the Samsung S9 within about an hour and a half.

But again, keep in mind that your devices need to be made to handle these speeds. The cable won’t make your smartphone recharge faster unless your phone is made to take advantage of what the cable can offer.

The APFEN right angled USB-C cable is a mixture of quality and value. Its 2.1A output is terribly average, and the slowest option on this list. That can be problematic for people who are dealing with very large batteries, or expect to make the most of rapid charge features. But it’s likely the best choice for someone who needs a particularly lengthy cable because APFEN provides a 10-foot option, and 2.1A will still get the job done for most people.

Many of the SUNGUY cable packs work out to roughly $3 per cable, making them an incredible value for someone who’s looking for multiple cables. The quality of each cable is a little above average for their price, and they support 2.4A output for some pretty rapid charging. This design isn’t really a 90-degree charging cable because it makes use of wider angle. But if you’re trying to connect into a cramped space, it’s definitely worth grabbing a pair of SUNGUY right angle USB-C cables.

Inch for inch, the UGREEN USB-C 90-degree cable is the most expensive cable on this list. It’s almost $3 per foot. But in many ways, it’s also the best cable on this list. It’s designed to last twice as long as the other cables here, and it provides 3A current for the fastest charges possible. That makes the UGREEN USB-C 90-degree charging cable an excellent choice for someone who can take advantage of those faster charging speeds, and someone who wants a cable that will truly last.