A few years ago, the idea of owning your own doorbell camera would have seemed outlandish. For one thing, cameras were simply too large. Businesses might have a hardwired, closed-circuit camera system. Hotel buildings and mansions might even have a buzzer with an intercom at the entrance. But an actual doorbell, with a camera built into the housing, was not realistic until about a decade ago.

Since then, there have been a number of designs from a number of manufacturers. Depending on what you want, you can spend a lot or a little. You can get a high-resolution camera or one with lower resolution. You can get one with a ton of app features, or one that’s a bit more basic. But the biggest decision of all is whether your camera should be hardwired or battery-powered.

Both have their advantages and disadvantages. A hardwired camera can operate continuously, as long as your home doesn’t lose power. Hardwiring also eliminates the need to worry about router placement, since there’s no wireless connection to worry about. On the downside, hardwired camera doorbells can be a pain to install. With a wireless camera doorbell, you don’t have to run wires or anything else. That said, you have to make sure your router is close enough and powerful enough. You’ll also have to recharge the battery from time to time.

One way to make this as painless as possible is to buy a second battery and a dual charger. This way, you’ll always have a fresh supply of power. When you need to change your batteries, you won’t have to leave your doorbell unpowered overnight.

The Ring is one of the most popular doorbell cameras, and many variants are battery powered. We’re about to review three of the best Ring doorbell battery chargers available today. We’ll begin by looking at the GoHonor Ring Batteries Charger. This is a simple, platform-style charger that holds your batteries vertically while they charge. Next, we’ll analyze the Skyworld Dual Port Ring Battery Charger. This is similar in many respects, but the batteries lay down flat instead of standing vertically. Finally, we’ll examine the Feirsh Gray Charging Station. This is a beefier charger, with a built-in USB tether and an LCD display screen. Once we’ve taken a close look at each of them, we’ll be able to render our verdict. Let’s begin!

Before we talk about Ring battery chargers, let’s talk about the Ring doorbell in particular. There are a number of variants, such as the Ring 2 and Ring Pro, and not all of them use batteries. The original Ring, for example, only works in hardwired mode. That said, there are a number of features the different models have in common. Here’s what you can expect from most Ring doorbells, starting with the Ring 2.

The camera resolution is 1080p full HD, which is fairly standard for a doorbell cam. It’s good enough to identify faces and even read name tags at a distance of several feet. There’s also a viewing angle of 160 degrees. It’s not quite a fisheye lens, but it’s close. This is all most people are ever going to need. That said, there are certain times you might want more resolution or a different angle. What if you need to read license plates at a distance, or see packages at the bottom of your door. In that case, consider a higher-resolution security camera that can be independently aimed. The X-Sense S21 2K Outdoor Security Camera is an excellent choice.

Another useful feature of most Ring cameras is their pre-roll feature. When the camera is triggered, the recording will actually include several seconds of previous footage. So if someone rings the bell and the camera activates, you’ll also see them walking up. This is common on many doorbell cameras. However, it’s usually only found in wired models. The constant buffering draws power, so most battery-operated cameras won’t do it. That said, the pre-roll footage won’t be as useful as the ordinary footage. Instead of full color and 1080p, it will be in black and white. Moreover, only the center area of the video will be in focus. But even so, that’s better pre-roll performance than you’ll get from most battery-operated doorbell cams.

The last thing to know about Ring doorbell cameras is that they don’t include a chime. Some can be wired to your home’s existing chime using your existing wiring. All will send notifications to your smartphone. As an alternative, they can be paired with aftermarket Ring wireless chimes. These include the original Ring Chime, as well as the Chime Pro. Now that we know the basic strengths and weaknesses of battery-powered Ring Doorbells, let’s talk about some battery chargers. 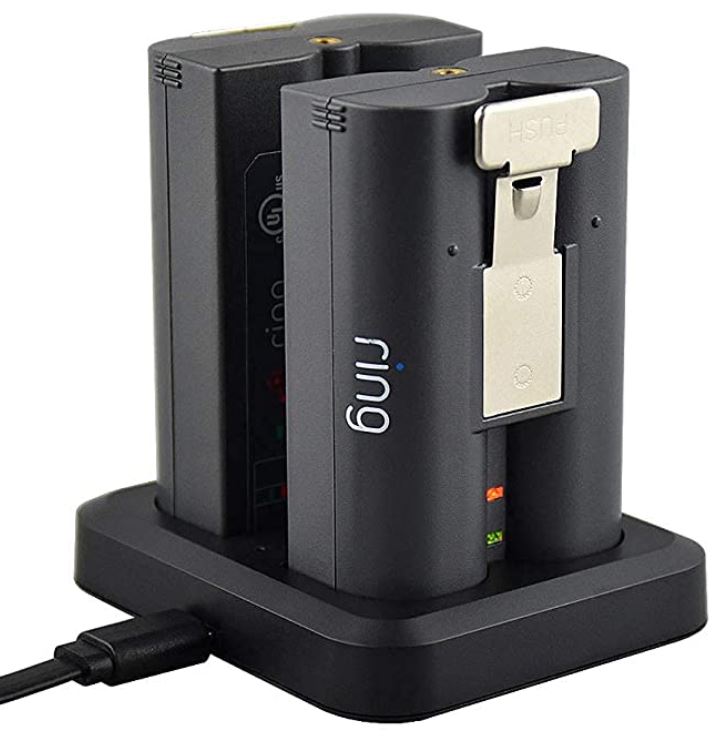 First on our list is the GoHonor Ring Batteries Charger. This is a flat, straightforward charger for two Ring batteries. The main unit consists of an ABS plastic platform, with two depressions where batteries can sit. The platform is black in color, and has a slight bevel at the corner to avoid any sharp edges. It’s designed so the Ring’s batteries will stand inside vertically while charging. This engineering choice minimizes the surface area as much as possible, so you save desk space. That said, keep in mind that the vertical configuration is a bit top heavy. It’s relatively easy to knock over if you accidentally hit it with your hand. 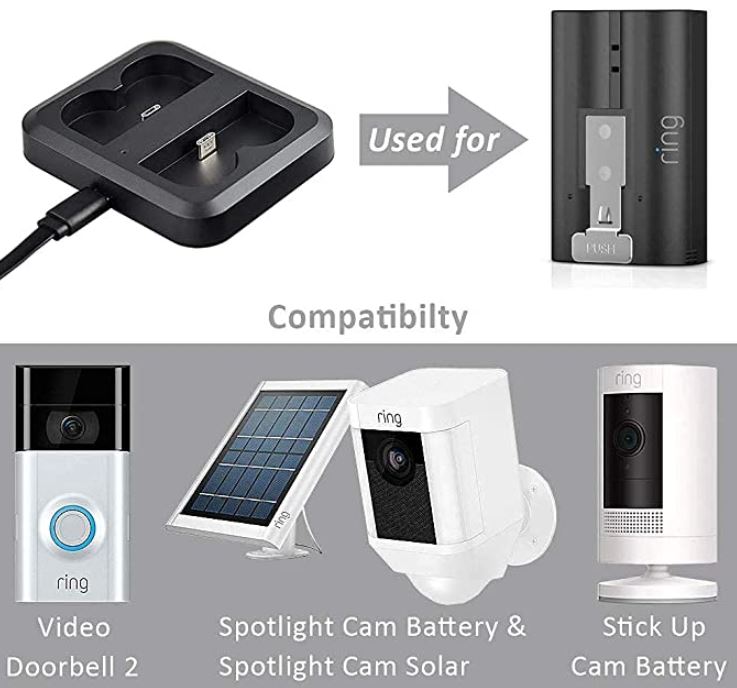 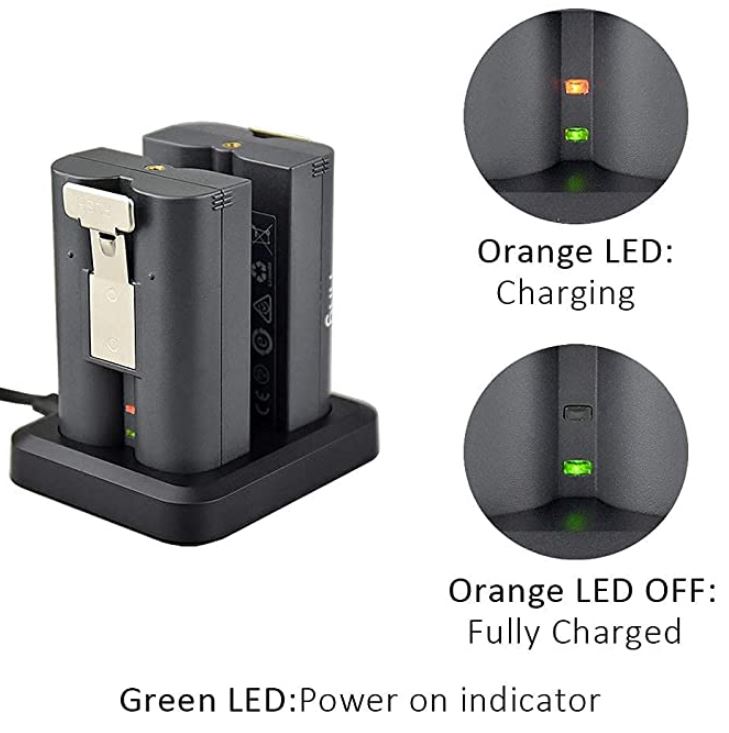 Power is provided by a 12-inch USB to Micro USB cable. It will charge at a standard rate of 5 volts, 2.1 amps. As a result, it can be plugged into any USB power port for charging. That said, there’s no AC adapter in the package; you’ll need to provide your own.

As far as indicators go, there’s only one built-in light. It’s a small white LED located near the plug, and it lets you know you’re receiving power. Then again, there are already charging lights on the Ring batteries themselves. The orange LED will illuminate during charging, and turn off when the battery is fully charge. The green LED will remain lit as long as the battery is connected to a power supply. 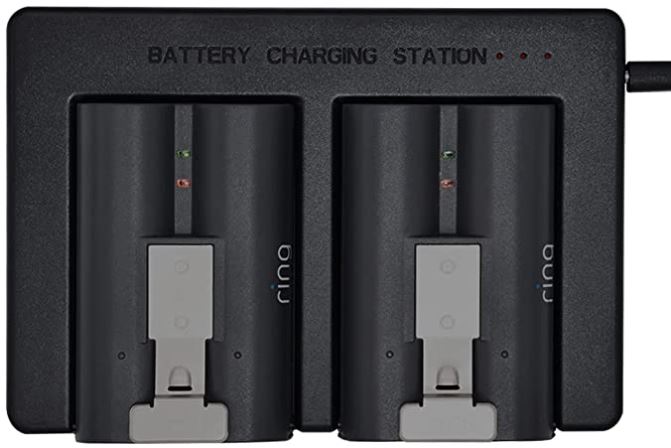 The Skyworld Dual Port Ring Battery Charger is similar to the GoHonor in that it’s flat. It’s also made from black ABS plastic, and sits flat on your desk. The main difference in the physical design is that your batteries lay in horizontally instead of vertically. This has its own benefits and drawbacks. On the positive side, it makes the charger much more stable. It’s impossible to tip over, since it’s already flat! On the downside, it takes up more desk space than a vertically-oriented charger. One other feature of note is the row of three green LEDs by the power port. These will fill up slowly as your batteries charge. 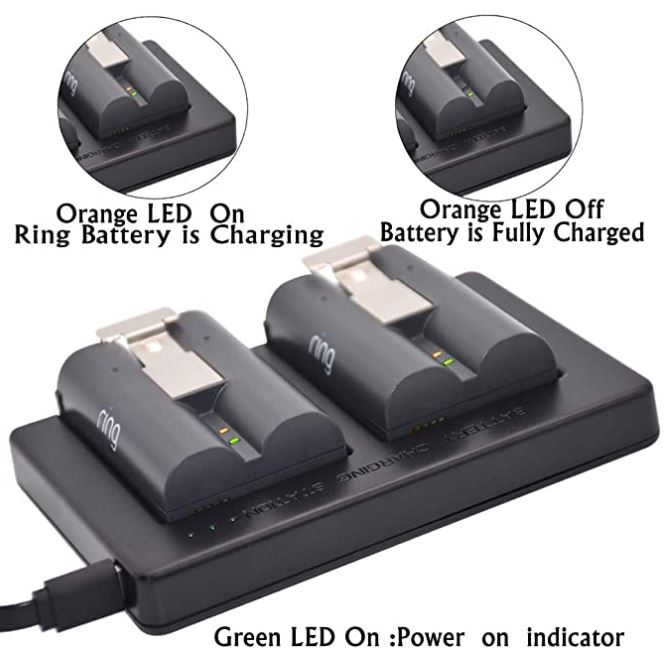 This charger is powered via USB Type-C, and includes the cable. Like the GoHonor, it’s just a charger. There’s no AC adapter, so you’ll need to find somewhere to plug it in. Thankfully, the Skyworld takes ordinary 5-volt, 2.1-amp USB power. There’s no need for anything fancy. You’re also protected from overcurrent, overvoltage, and short circuits. 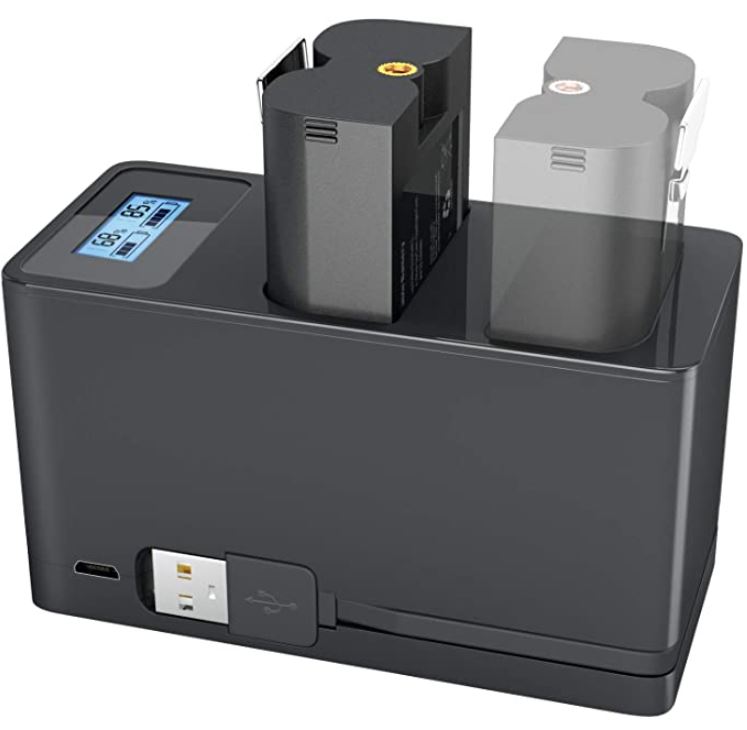 The Feirsh Gray Charging Station is bigger and beefier than either of our last two options. It’s a large ABS plastic housing, measuring 4.33 inches long, 2.05 inches wide, and 2.48 high. Instead of sitting in shallow depressions, the batteries sit inside the housing, with just the tops poking out. This helps keep them free of dust, which is ideal for leaving your spares on the charger. 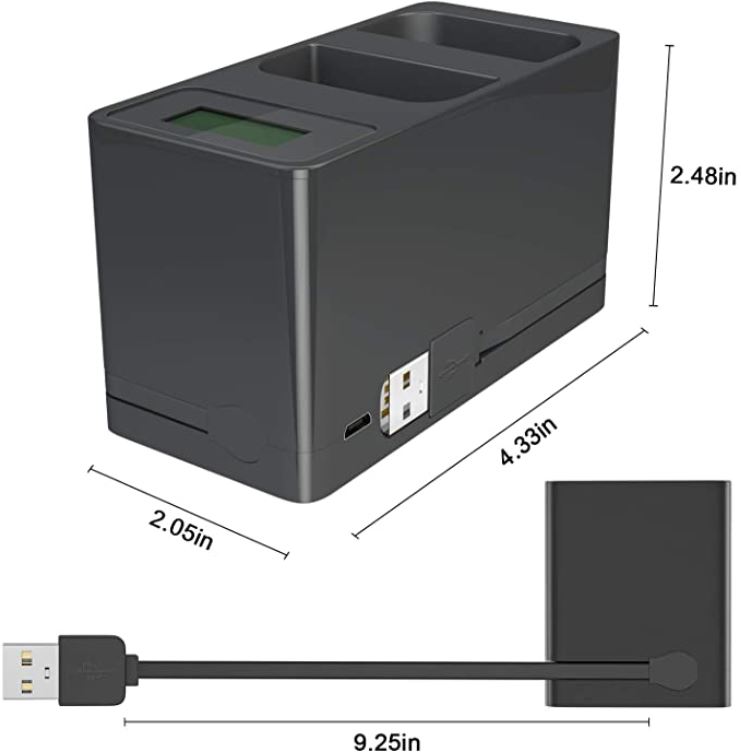 At one end of the housing, there’s an LED display which shows the status of both batteries. There’s both a visual bar and a percentage reading for each battery. This makes it much easier to keep track of your charging status if you’re feeling particularly impatient. It lights up when you first put your batteries in or plug the unit on. But after about 30 seconds, the backlight disappears to save power.

As with our other two chargers, there’s a smart chip inside that provides a number of protections. It keeps you safe from overvoltage and overcurrent, so your batteries don’t get damaged. It prevents short circuits and overcharging, and even has a built-in temperature sensor to prevent overheating. Not only that, but the material is all fire-resistant. 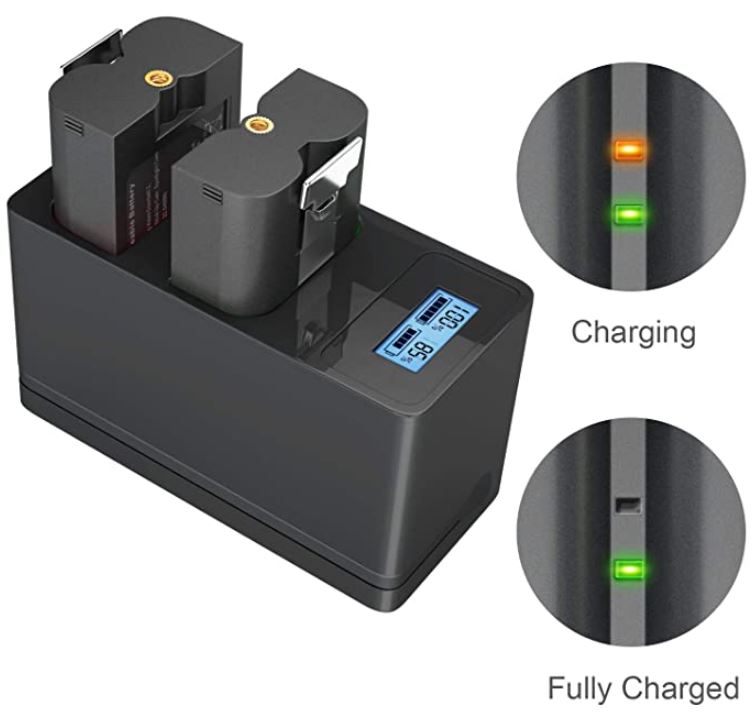 There are a couple of additional features that make this charger worth considering. To begin with, the kit includes a battery. If you were going to buy a spare, you won’t have to buy one separately. There’s also a built-in USB pigtail, which is 9.25 inches long. As a result, you don’t need to carry a charging cable, although you can if you want to. There’s a Micro USB charge port available as an alternative.

So, where does this leave us? The GoHonor Ring Batteries Charger is effective enough, as well as very affordable. It also doesn’t take up a ton of surface area. On the downside, it’s a bit top-heavy, and there’s not much to it. The single indicator light and dual sockets don’t add a ton of value over a basic Micro USB cable.

The Skyworld Dual Port Ring Battery Charger is similar in some respects. It’s a fairly basic ABS plastic charger, with dual ports. That said, the batteries sit flatter, which makes it more stable than the GoHonor. The extra LEDs are another nice touch, and provide a good value for the price. Our only complaint was the relatively large surface area this charger takes up.

The Feirsh Gray Charging Station is by far the most robust. It’s big and blocky, with a high-quality LED battery meter. It also has a built-in USB pigtail, so you don’t have to carry a separate cable. It’s more expensive than the other two options, by a significant margin. But it includes a spare battery, which explains a lot of the cost.