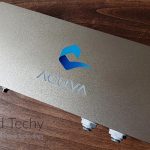 Whether you’re at home or on the road, the quality of your drinking water is no laughing matter. You want to know that what you’re drinking is safe, and isn’t going to get you sick. So what do you do when you’re RVing in the wilderness? For that matter, what if you’re not 100 percent confident in your municipal water supplier? In that case, you’ll want to use a water purifier. There are many types of purifier, including simple pitchers like a Brita filter. But these need to be manually filled, and you have to wait for them to drain. An in-line water purifier can be used like you use your ordinary faucet, without any extra shenanigans.

Today, we’re going to review the Acuva ArrowMAX 2.0 UV-LED Water Purifier. This is an in-line water purifier that’s designed to be compatible with both residential and RV water systems. As a UV purifier, it’s designed primarily to remove microbes. It also includes a smart faucet, so you don’t need to buy any extraneous hardware. But how well does it actually perform? To find out, we’re going to need to look beneath the hood, and learn a bit more about this water filter. Once we understand its strengths and weaknesses, we’ll be able to render a fair verdict. Let’s get started!

Before we talk about the Acuva ArrowMAX purifier in particular, let’s discuss UV purifiers in general. By now, most people are already comfortable with particulate filters. What’s so special about a UV water purifier? The main difference is that UV purifiers are made specifically for killing germs. Here’s how that works.

Think of a plain old Brita filter. It uses a filter cartridge, which is filled with activated charcoal. Charcoal is one of the most effective filtering materials in the world. It absorbs particles like dirt, silt, mold spores, and pollen. It also soaks up heavy metals like arsenic that can be found in ground water. These are all great things, and they do a lot to make your water safer to drink. If your water is contaminated with arsenic, you’ll be much better off with a good charcoal filter! That said, charcoal doesn’t kill viruses or bacteria. If the water is carrying these kinds of microbes, they’ll pass right through your filter. 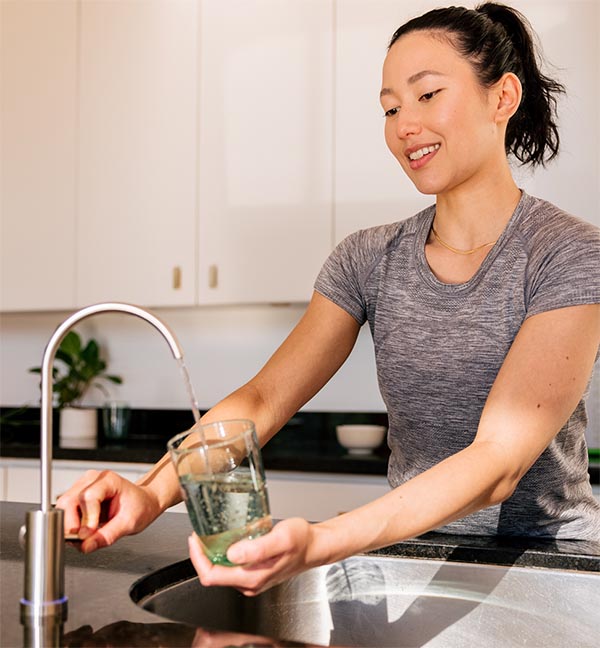 That said, remember that in and of itself, a UV purifier is only good for killing germs. It won’t remove sediment, it won’t absorb heavy metals, and it won’t eliminate toxins. For this reason, you need to use them appropriately. Is your water clear and free of chemicals and heavy metals? In that case, a UV purifier alone will probably do the trick. Is it murky, or contaminated? In that case, you’re going to want a physical filter as well as a UV purifier.

One useful type of filter is a reverse osmosis filter. These filters fit in compact cylinders, and can be designed for in-line use. This makes them easy to rig up alongside a UV purifier. Simply have your water pass through the reverse osmosis filter first, and the UV purifier next. They’re also versatile. Different filters are designed for metals, chemicals, and other types of contaminants. As a result, you can build a complete purification system that’s tailored to your water supply. 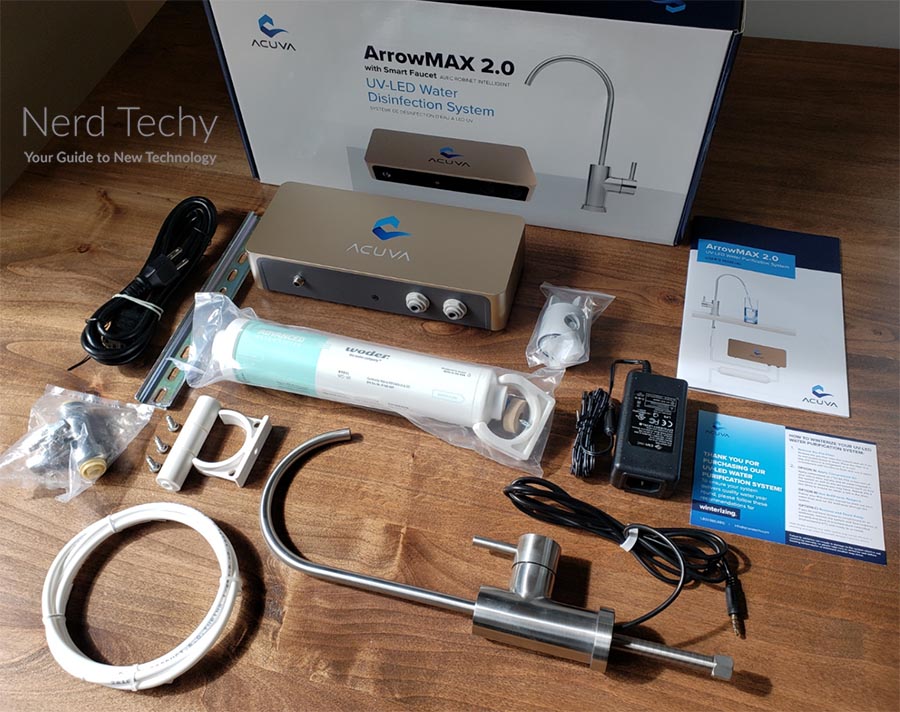 The Acuva ArrowMAX 2.0 UV-LED Water Purifier is actually a two-part kit: a purifier and a faucet. The purifier is compact, measuring 9.75 inches wide, 4.1 inches deep, and 2 inches thick. It’s also fairly lightweight, at only 1.25 pounds dry. The housing is constructed from ABS plastic which is more than tough enough for this application. It’s mostly gold in color, which is an odd choice for a device most people will never see. The front panel is black, though, which provides a little bit of contrast. There’s also an attractive blue Acuva logo on the top side of the housing. 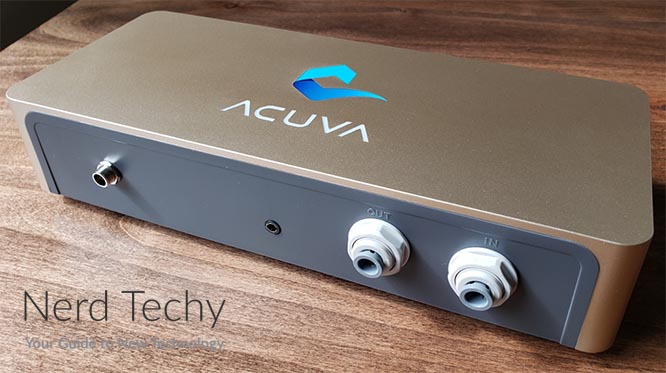 All your connections are on the front, black part of the unit. To the right, there are a pair of PEX connections, marked “In” and “Out” respectively. There are a couple of reasons Acuva opted to go with PEX instead of ordinary pipe. For one thing, PEX is compatible with campers and RVs, where copper piping is impractical. For another thing, there’s no reason for anything with more capacity. The total flow rate is less than you’ll get from a standard faucet, so a full-diameter pipe is unnecessary. Not only that, but PEX is easier to install. You don’t have to weld anything, so it’s far simpler for the average person to manage. 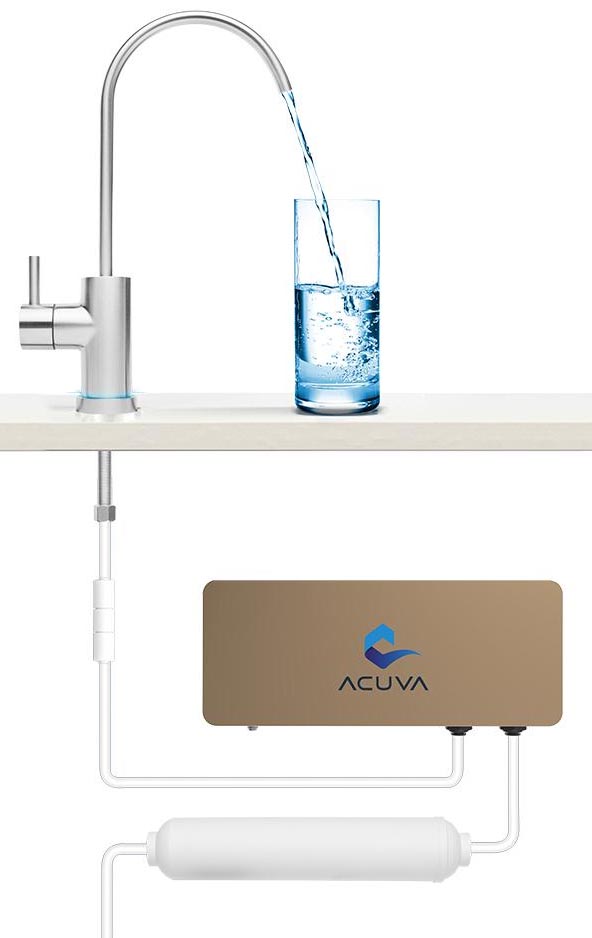 The faucet included in the package is well-engineered. It’s stainless steel, with a slender, arched design that’s par for the course for purifier faucets. This makes it easier to fit glasses and small pots underneath without having to swing the faucet out of the way. That said, it does pivot if you need it to, and it’s mounted in a full-sized base. This base makes installation simple, since it installs in your sink’s standard fourth hole. There’s a single handle on the right, which turns the flow rate on and off. There’s no temperature selector, since none is required. You’ll only be running cold water through the ArrowMAX. 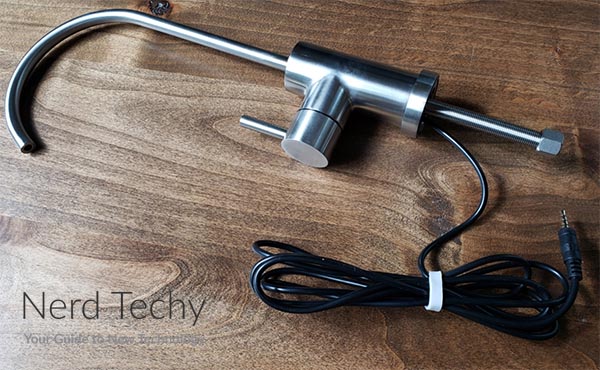 As you can see, this is a well-engineered water purifier. But it’s also tied into one location. That’s not a big deal for getting water from your sink. But what if you want a purifier that goes wherever you are? In that case, check out our guide to the best portable UV water sterilizers. They can be carried anywhere, and used to sanitize a single bottle of water. 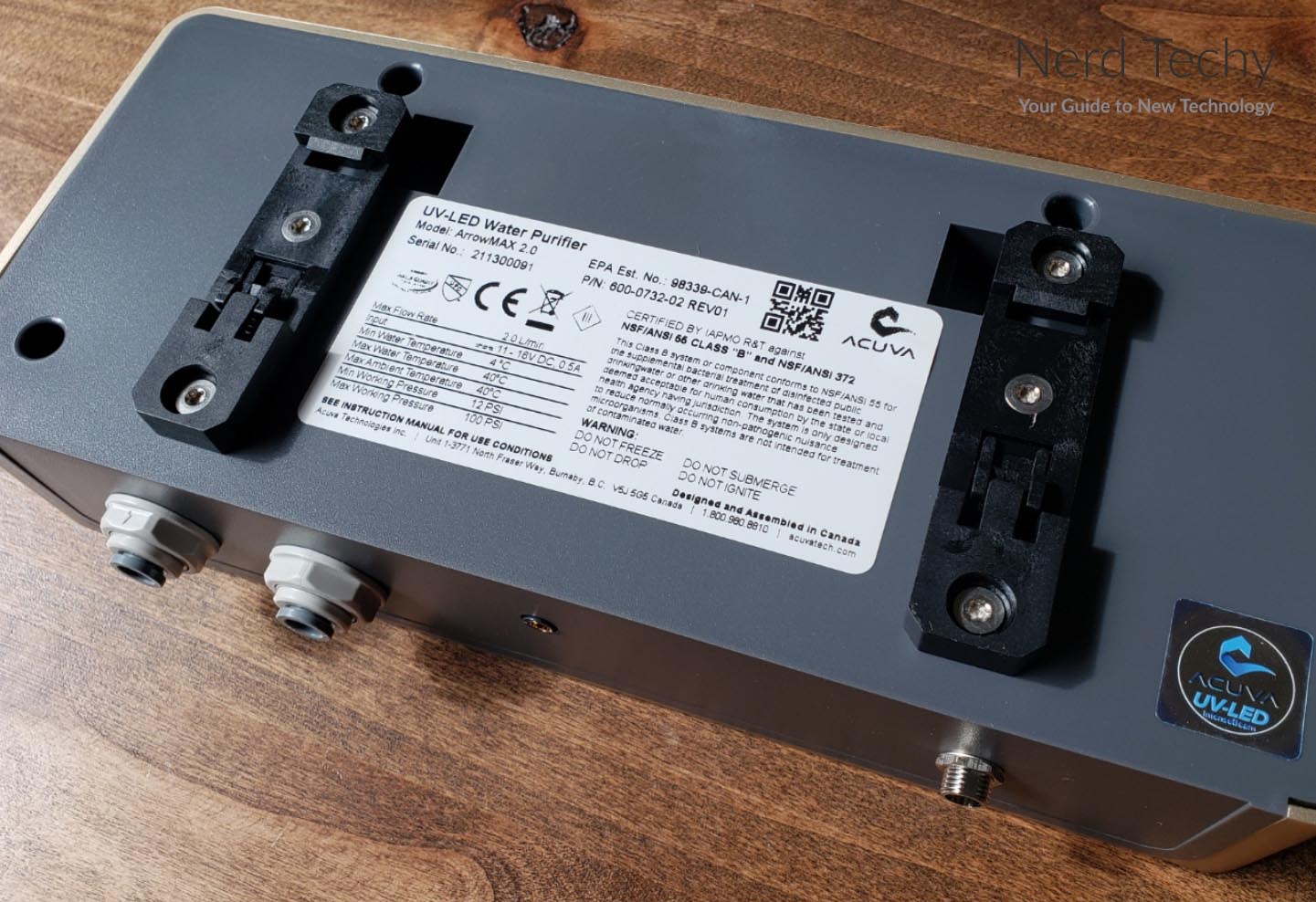 In the middle of the front panel on the filter, there’s a small power plug. This is for the AC power adapter, which gets connected to your ordinary household outlet. There’s a larger plug on the left, which is used for an RV’s DC power connection. Once again, there’s an adapter included. 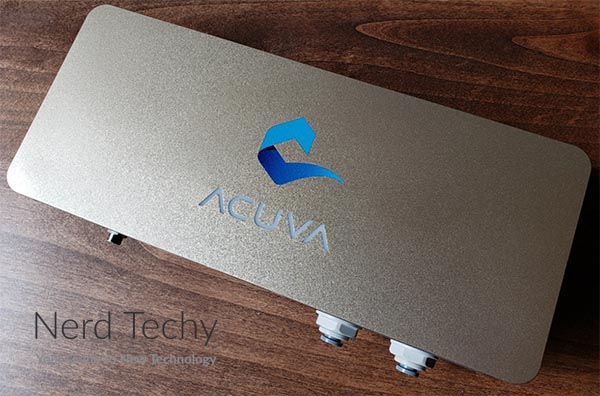 The Acuva ArrowMAX 2.0 purifies two liters of water per minute. This is roughly equivalent to a half gallon, or about a quarter the flow rate of an ordinary faucet. It’s perfect for filling water bottles and glasses for drinking water. It’s a bit slower if you’re trying to fill a large container. For example, it takes a couple of minutes to fill a large jug. That said, you don’t need to worry about using it for pasta water. Since you’ll be boiling the water anyway, you wouldn’t need UV purification. Just use ordinary water and let the boiling process take care of any microbes. 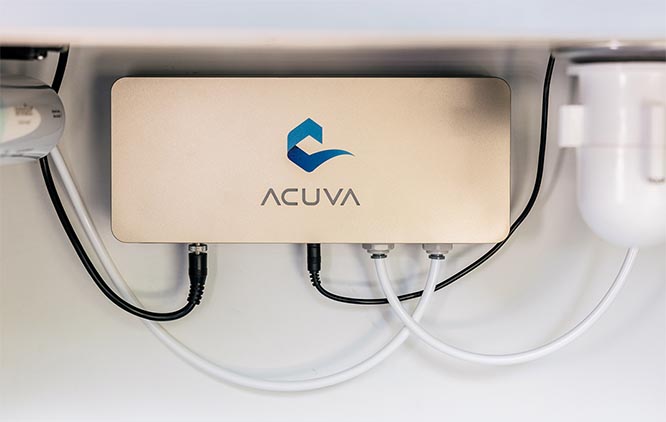 That said, the ArrowMAX is ultimately only effective for a single sink. But what if you want to purify the water on every sink in your home? If that’s what you want, you’re going to need a whole house water purification system. They’re expensive, but they get the job done for your entire water supply. 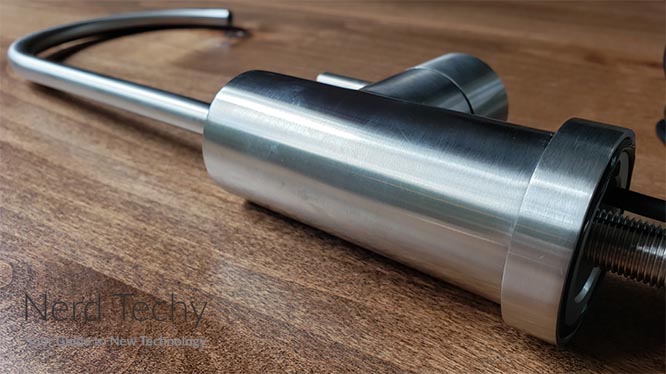 One thing we liked about this purifier is that it uses a UV LED, rather than a traditional UV bulb. The reason this is so beneficial is that ordinary UV bulbs contain mercury. If they fail, the mercury can leech into your drinking water, causing mercury poisoning. An LED bulb doesn’t contain any toxic chemicals, so it’s much safer to use underwater. Moreover, LED bulbs draw an order of magnitude less power than an equivalent standard bulb. This is a huge energy savings, particularly in RVs and campers, where every last watt counts. 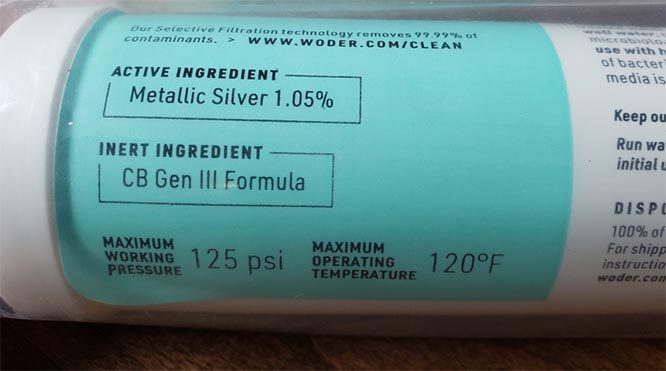 The LED itself is rated to treat 120,000 liters of water, after which the whole system needs to be replaced. That’s equivalent to 31,700 gallons, enough to fill a large backyard swimming pool. Put another way, that’s more than 202,000 20-ounce water bottles. Depending on how much water you use, you’re looking at anywhere from a seven to 10-year supply. That’s a ton of water, enough that you may have even moved out before the LED fails. 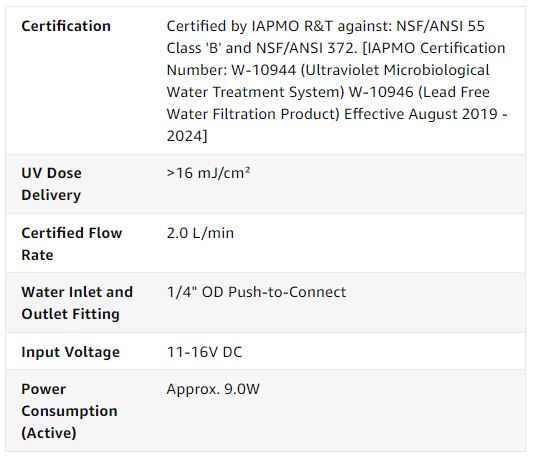 One thing we didn’t like is the fact that there’s a pre-filter, which needs to be changed every three to six months. What bothered us is that this is not mentioned anywhere in the marketing material. Acuva portrays the ArrowMAX 2.0 as a maintenance-free purifier, but it truly isn’t. 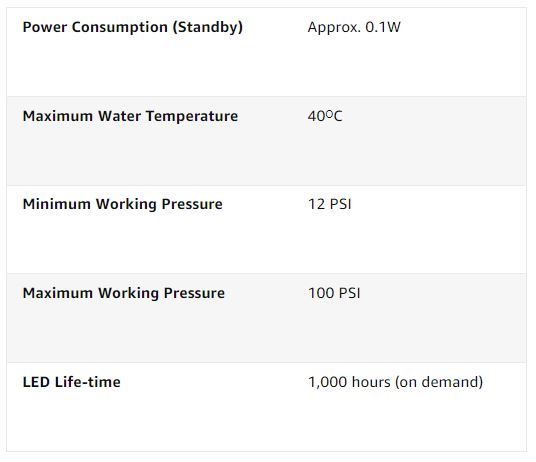 In most respects, the Acuva ArrowMAX 2.0 UV-LED Water Purifier is very well-engineered. To begin with, it’s compact enough to install just about anywhere. It’s easy to fit in a cabinet, or even behind the sink in an RV. It’s also highly effective, with an LED that can last for as long as 10 years. And with two liters per minute of flow, it’s fast enough for most applications.