Just a few months after its release, the PlayStation 5 can be tough to get your hands on. Supply shortages, combined with higher-than-expected demand, have left most retailers out of stock. The same is true for the Xbox Series X, which is also nearly impossible to obtain. Online resellers scooped up most of the early units, forcing the rest of us to pay top dollar. That said, new PS5 consoles are continuing to roll off the factory line. If you haven’t gotten one already, you’ll soon be able to. But if you have got one, you may be moving on to the next step: customizing your brand new console.

Perhaps the most popular customization option for any console is a controller skin. For one thing, your controller is where the rubber meets the road. Your hands are your only way to interface with your console. If the controller isn’t comfortable and easy to use, you’re not going to have a good time. For another thing, a controller skin won’t void your warranty. It may cause some fitting issues with your DualSense charging dock, but that’s about it. When compared to most other console modifications, it’s just so easy.

Today, we’re going to review three of the best skins for the PS5 DualSense controller. Each of them has its own benefits and drawbacks, and its own features to bring to the table. We’ll begin by reviewing the eXtremeRate PlayVital Guardian Edition. This is a rugged, heavy-duty skin for protecting your controller. Next, we’ll examine the Chin FAI Anti-Slip Silicone Skin. This is a medium-heavy skin with three extra sets of thumbstick caps. Finally, we’ll look at the Aosai PS5 DualSense Controller Skin. This is a lightweight skin that comes with four sets of caps. Which one is right for you? Let’s look a little closer, and see how they stack up!

How the DualSense Controller Evolved

That said, the original PlayStation came out at an unusual time, smack in the middle of a console generation. When Nintendo released the N64 in 1995, the controller changed the console world forever. It integrated a thumbstick in addition to a D-pad, specifically for 3D gaming. Games like Super Mario 64, Goldeneye, and Mario Kart 64 all came out during this time period. All of a sudden, the original PlayStation controller looked downright quaint. 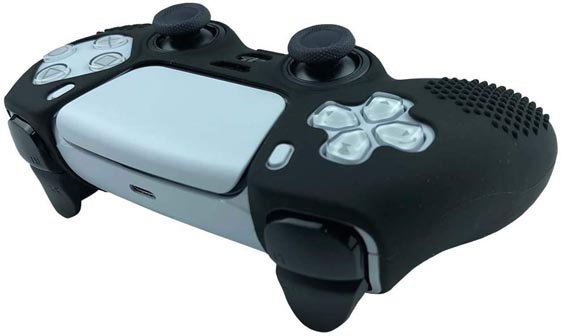 It was in this environment that Sony released the Dual Analog controller, in April of 1997. But the Dual Analog controller suffered from some serious drawbacks. The thumbsticks were smooth and slippery, the triggers were too small, and the hand grips were too short. Sony soon quietly retired the design, and went back to the drawing board to create another new controller. This is the process that gave us the original DualShock.

In addition to building a more ergonomic design, Sony also incorporated dual motors into the DualShock controller. This is where it gets its name, and it was a shot across Nintendo’s bow. Their N64 Rumble Pak was just a single motor, so the haptic feedback was less detailed. It also required AAA batteries for power, and you could chew through a lot of them. The DualShock’s motors, on the other hand, were powered directly by the console itself. The DualShock controller was soon the standard with all new PlayStation consoles. It’s even gone on to become the world’s best-selling aftermarket controller. This is because most PlayStation owners ended up buying one in order to play newer games.

One thing that has remained consistent throughout the PlayStation’s lifetime is the symbols on the buttons. They may seem random, but each of them actually means something. The X and O buttons represent “no,” and “yes” in Japanese culture. An American could be forgiven for not knowing this, since the functions are usually reversed on American games. The square button represents a sheet of paper, like a menu. The triangle represents a head, or speaking to an NPC.

The DualShock evolved even further in the year 2000, with the release of the PlayStation 2. Along with the new console, Sony created an updated controller. The DualShock 2 came with some minor cosmetic cases, like a new logo and a black housing instead of grey. The buttons were also upgraded to be pressure-sensitive, and the thumbsticks were stiffened. Finally, the DualShock 2 used a different connector. There was an additional variant in 2000 for the PS One, a miniature version of the original PlayStation. This variant sported yet another connection type, designed for the PS One’s slimmer housing. With the PlayStation 3, the DualShock 3 brought us motion sensitivity. The DualShock 4 came with a touch pad for even more input options.

With the PlayStation 5, most people expected yet another DualShock controller. But Sony decided to change things up by giving us the DualSense instead. It’s been noticeably fattened up, with a better grip for larger hands. It also has a more modern aesthetic, with an attractive, two-tone housing. For all of these changes, though, it remains the same PlayStation controller we know and love. Its dual motors, motion controls, and trusty thumbsticks remain the same as ever. 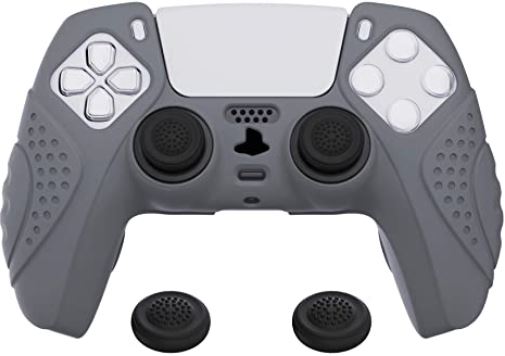 eXtremeRate is one of the better-known manufacturers of game console accessories. Among other offerings, we’ve looked at their Nintendo Switch backplate in the past. More often than not, we like what we see. So we were eager to get our hands on the eXtremeRate PlayVital Guardian Edition. 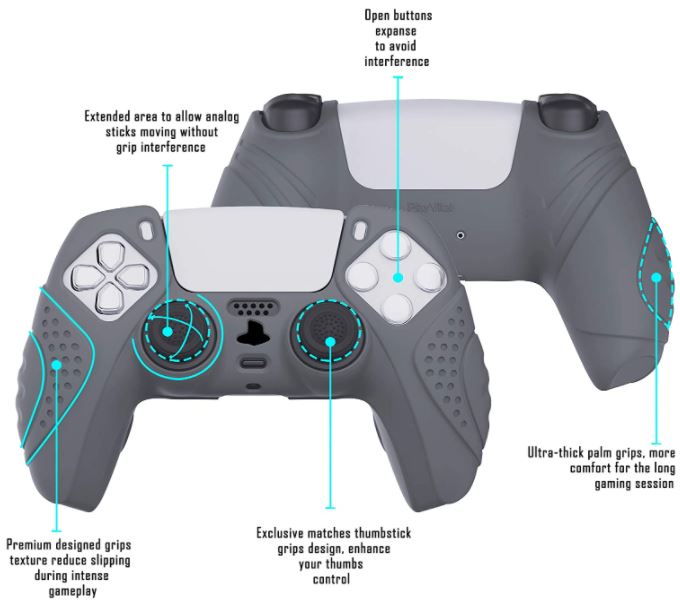 This is a beefy, heavy-duty skin that comes in 11 colors. It can be ordered in black, aqua green, blue, grey, mauve purple, midnight blue, and purple, among other options. There are cutouts for all of your ports and buttons, and charging on a cord is no issue. That said, the material is far too thick for charging on most charging docks. It’s easy to install, and simply stretches over your controller. The first time or two, you may have to do some wiggling to get it in all the way. This is a good thing, though. It means the fit is nice and snug, and it won’t pop off when you least expect it. 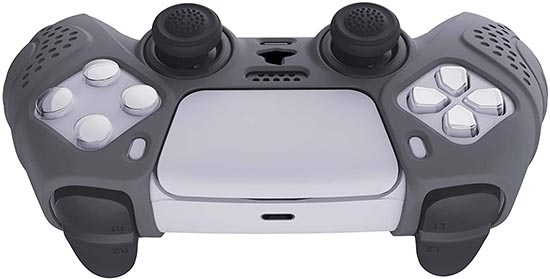 The silicone is particularly thick around the grips, which are heavily padded. In this area, you’ll find a wide, raised, textured ridge, with a thinner portion on the inside. This fattens the DualSense’s already-wide grip, but also provides a more ergonomic shape. The PlayVital Guardian Edition conforms easily to your hand. The rubbery finish also resists slipping, even if you’ve got sweaty palms. This can be clutch during an intense match of Warzone, or any other intense multiplayer game. Along with the skin itself, you also get a pair of white joystick caps. These are simple textured caps, and don’t significantly raise the thumbsticks. They just provide a little more secure of a grip.

The Chin FAI Anti-Slip Silicone Skin is a medium-heavy sleeve designed for a broad array of users. It’s neither so thick as to be unwieldy, nor so slim as to make little difference. Most importantly, this medium thickness is still enough to provide good shock-resistance. Like the eXtremeRate sleeve, it’s made from silicone, which is an ideal material for controller sleeves. Silicone has an easy-to-grip rubbery finish, and won’t get slippery from sweat. It’s also nice and stretchy, so it’s easy to slip on and off of your controller.

We really liked the button cutouts, which sit a bit tighter to the buttons than most sleeves. To be fair, this is largely a matter of preference. If you press the buttons from the top, you’ll appreciate the tighter look. If you tend to hit the sides of the buttons, though, the sleeve can actually get in the way. It has ergonomic grips similar to the PlayVital’s, though the grips are located closer to the center. There are also additional knobbed grips on the outside of the handholds. This skin comes in 13 different colors. Among others, you can find it in black, blue, red, white camo, purple, and several two-tone designs.

Along with the skin itself, you’ll receive a set of six thumb grip caps. These consist of three pairs in three different heights, all with cupped tops. As a result, you can somewhat customize your thumbstick height. All the caps are black, with the exception of some of the shorter caps, which come in two-tone patterns. 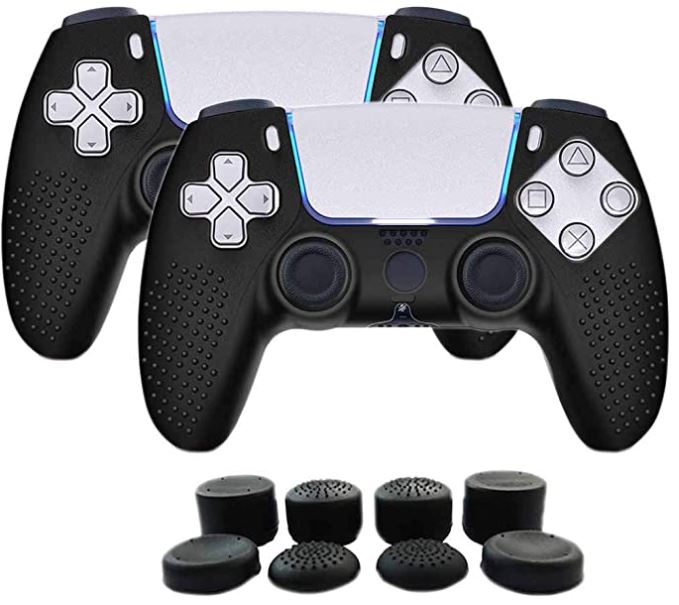 The Aosai PS5 DualSense Controller Skin is the slimmest of the bunch. This has both its good sides and its bad sides. On the one hand, the thin sleeve doesn’t provide as much shock absorption as a thicker one. On the other hand, it’s least likely to interfere with any given charging dock. Moreover, the thin profile is ideal for people with smaller hands, who don’t need a fatter hand grip. Finally, a thinner material is easier to stretch. You won’t have to muscle your controller into this sleeve, although it also won’t grip quite as tightly.

None of this is to say that the Aosai grip is a poor choice. Far from it! If you’re happy with the thickness, you’ll be able to enjoy a very comfortable grip. The hand grips are both studded, which helps keep your hands from slipping. More importantly, they achieve this without adding any unnecessary thickness to the design. The Aosai skin is available in the most colors of all our options. You get 18 choices, from black and white to pink and rainbow. If you’re looking to customize with an unusual color, there are definitely a few funky ones here! 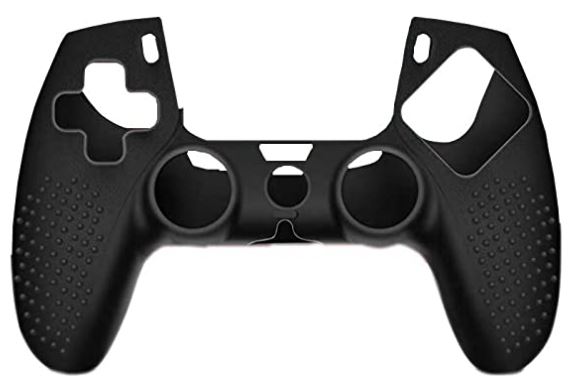 Like the Chin FAI sleeve, this one comes with a set of thumbstick caps. However, there are four sets instead of three, in three sizes instead of two. You get two pairs each in large and small. One pair is cupped, while the other is domed. So you get less choice in height, but more choice in surface shape.

As you can see, the main difference between these DualSense sleeves is their thickness. A fat, heavy-duty sleeve provides better protection, and theoretically a better grip. That said, it can also interfere with plugging into a charging dock. And if you’ve got smaller hands, you may actually prefer a thinner grip. We started off by looking at the thickest of the bunch, the eXtremeRate PlayVital Guardian Edition. This fat silicone grip is no joke, and provides plenty of padding and extra thickness. The included thumbsticks are fairly basic, but they get the job done. And the fit is very secure, and doesn’t slip around while you’re playing.

The Chin FAI Anti-Slip Silicone Skin is the most versatile skin of the bunch. With its medium thickness, it’s suitable for the widest variety of hand sizes, from large to small. For all of that, it’s very ergonomic, with knobbed outer grips that are quite comfortable to hold. The tight button cutouts won’t be the right choice for everybody. They can somewhat interfere with button operation depending on your playstyle. But the three different thumbstick heights are something everybody can appreciate.

Last, we reviewed the Aosai PS5 DualSense Controller Skin. This is the slimmest skin, and provides the least shock protection. That said, it’s ideally-sized for people with small hands. It also comes in the largest number of colors, and comes with cupped as well as domed thumbstick caps.