If you’re a business – or a veteran – there’s a good chance you have a flagpole outside your home or business. And if you have a big flagpole, it might be costing you money. Under the U.S. Flag Code, if the American flag is flying at night, it’s supposed to be illuminated.

And while you won’t actually get in trouble for ignoring that rule, it’s considered disrespectful. Most people set up a flagpole light that comes on when the sun goes down. For businesses, this has an added benefit – it makes your location more visible. But if you have an old flagpole light, you’re probably wasting money on it.

Thankfully, there are better solutions. A new LED flagpole light can save you tons of power for less than the annual cost of your current light. As a general rule of thumb, LEDs draw about 10% of the wattage of an equivalent incandescent bulb. So with our example of the 200-watt floodlight, you could get the same performance with a 20-watt bulb.

But who says you have to pay for electricity? A solar panel is more than enough to power a single LED light. During the day, it can charge a reserve battery. At night, the battery powers the light. So for a one-time investment, a solar-powered LED flagpole light can provide years of free illumination. 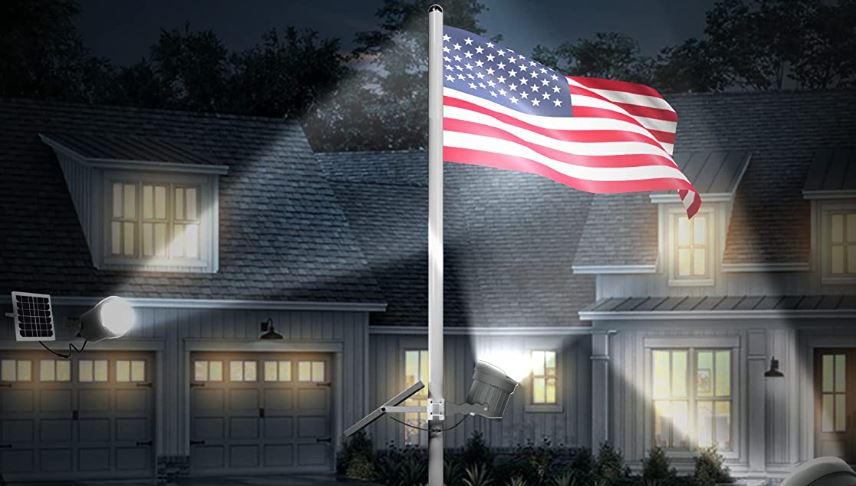 We’re about to review four of the best solar LED flagpole lights we could find. All of these lights are designed to easily mount on your flagpole. And all of them have enough solar power and battery life to last you through the night. In the right situation, any one of them could be the best option.

But how do you know which one is ideal for you? To find out, we’ll have to take a much closer look. We’ll talk about the physical design and how they mount on your flagpole. We’ll look at how much light they put out, and where the light is positioned. Additionally, we’ll talk about weatherproofing and any other notable features. After that, we’ll have enough information to make a fair judgement. Let’s get started! 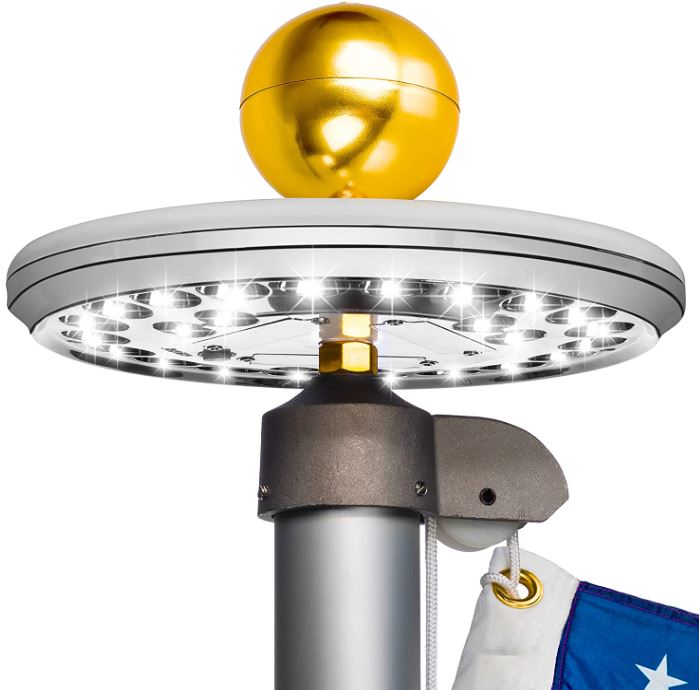 The Deneve Deluxe Solar Flag Pole Light is a disc-shaped light that mounts at the top of your flagpole. It’s constructed from ABS plastic, but the material is metallized, and can be ordered in silver or gold. That way, you can order it to match your flagpole’s finial. The light shines down in a circle, covering all 360 degrees. That way, your flag will be illuminated no matter which way the wind is blowing. 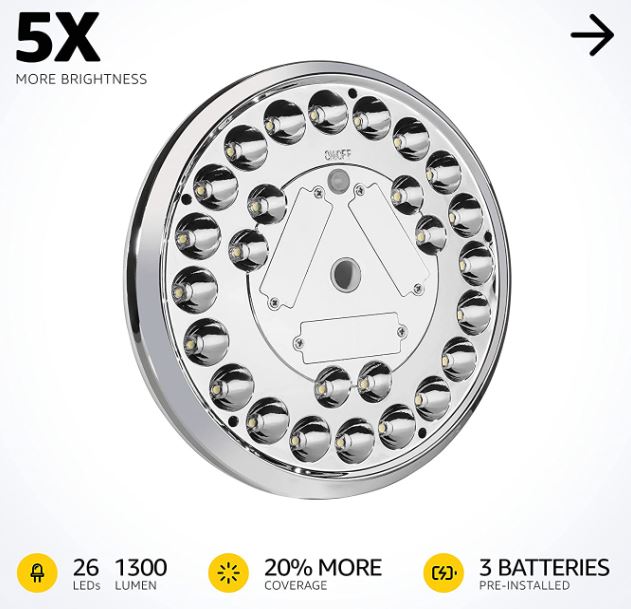 The housing measures 9.5 inches in diameter, with a hole in the center like a donut. It’s designed to fit a 0.5-inch spindle, which is the most common size. You remove your finial, then put the light on the spindle. Then you screw the finial back into place, and the light is secured. This light is 1.5 inches thick, so make sure your spindle is long enough to accommodate it. 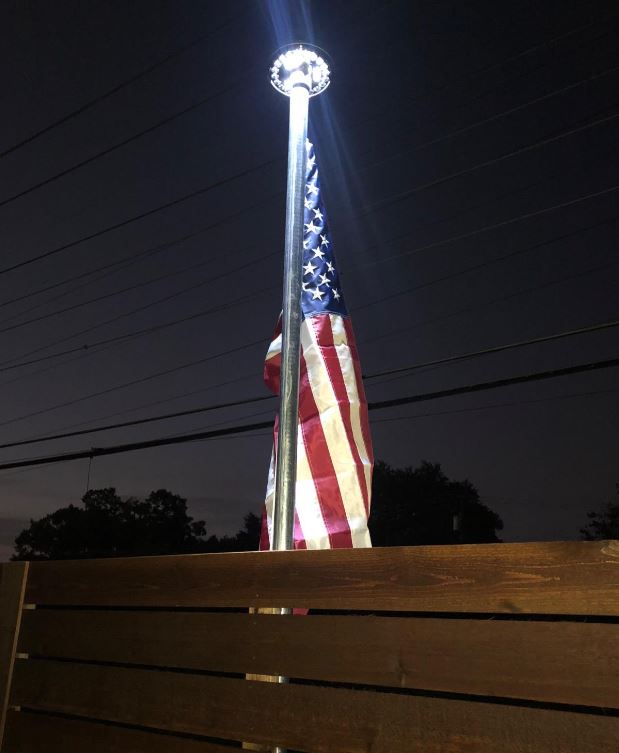 The Deneve light is rain-proof and can withstand most ordinary weather. Storms, snow, and other nasty conditions won’t put it out of commission. That said, the housing doesn’t breathe very well, so it’s prone to developing condensation in dry environments. And like with any solar-powered device, the battery won’t charge if the panel is covered with snow.

It’s worth noting that Deneve is a family-owned company that makes all of their products in the USA. They also donate a portion of their profits to support the Semper Fi Fund, a foundation that supports wounded veterans. 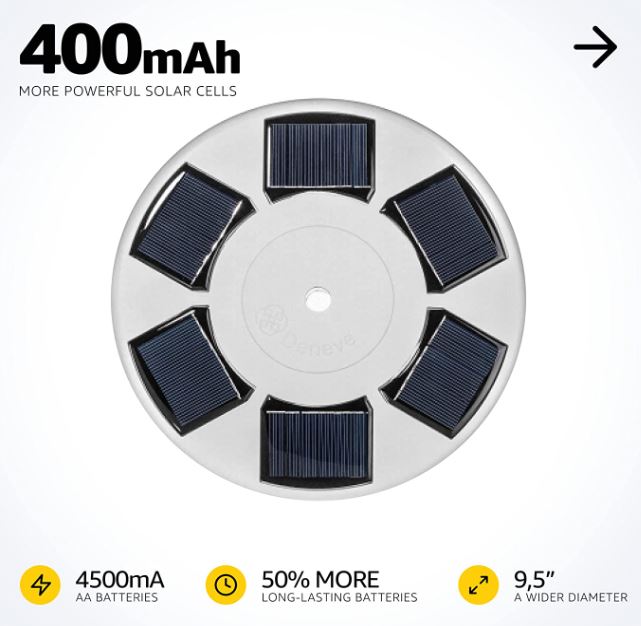 The solar panels themselves are located on top of the light, and are invisible from the ground. They charge an internal 6,600mAh battery, which has enough charge to run for 18 hours. In most areas, that will be more than you ever need. If you live in Alaska, good luck getting any solar light to work. 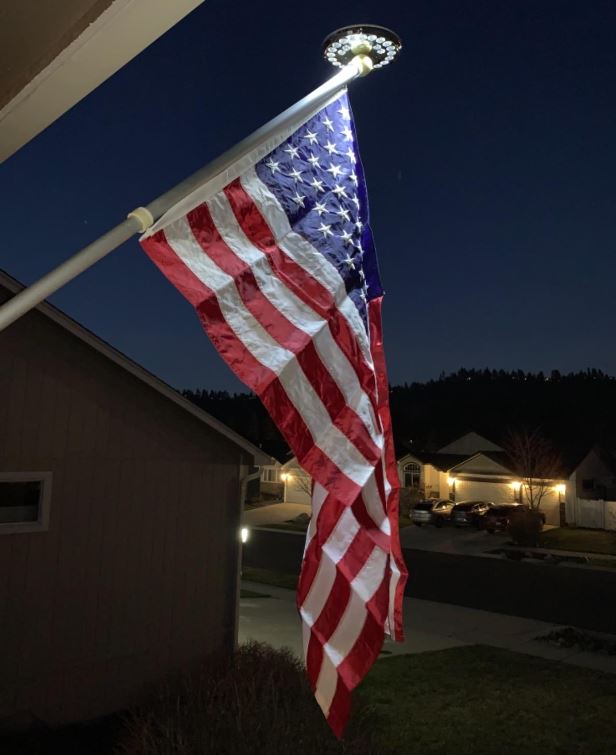 The Deneve light has a built-in light sensor, and works automatically. When it gets dark, it will turn on to light up your flag. When it’s daytime, it will turn off to conserve power. The LED diodes put out 1,300 lumens of illumination. That’s enough to light up a reasonably large flag, the type you’d use on a 25-foot flagpole. 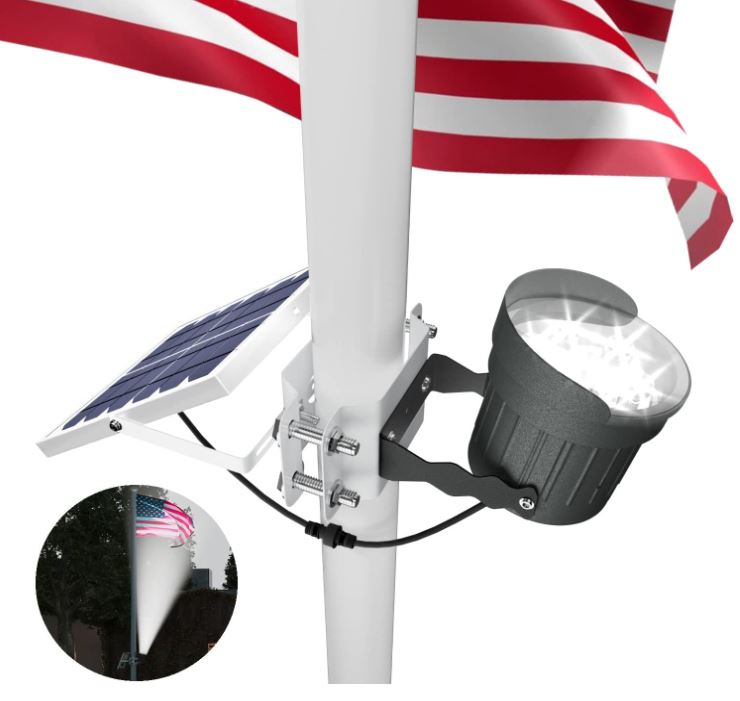 The Ofuray 3-in-1 Solar Flag Pole Light has a separate light and solar panel. The light itself looks like a traditional spotlight, and is constructed from a durable black aluminum.

It mounts on the side of your flagpole, and points up towards your flag. The bracket is hinged, and allows you to adjust the angle of the spotlight as needed. As a result, it’s suitable for a wide range of flagpole sizes, and all but the biggest flags. 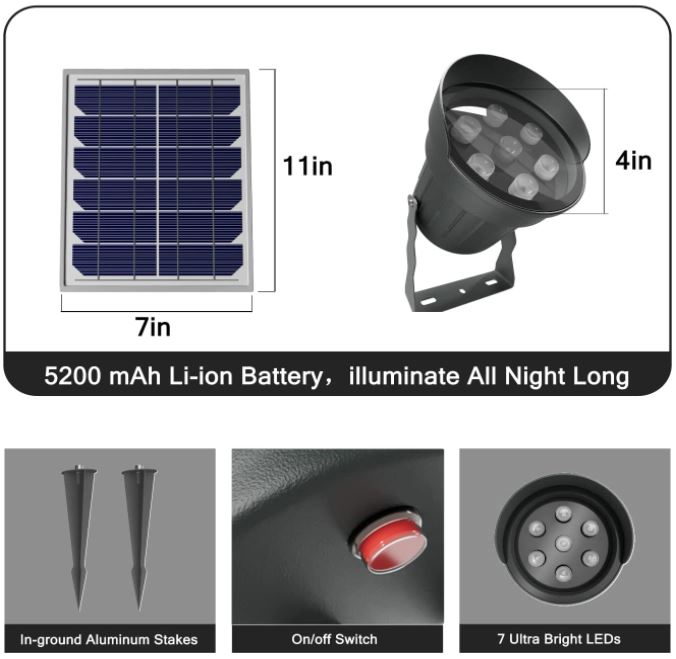 The solar panel mounts on the opposite side of your flagpole, and is also adjustable. Both the solar panel and the light mount into the same large bracket, which clamps around your flagpole. It’s adjustable to fit poles with a diameter of one to four inches. That’s a pretty wide range, and includes anything you’d use at a home or small business.

The entire kit has a weather-resistance rating of IP67. The “6” means that it’s 100% dust-resistant, suitable for use in very dry areas. The “7” means that it can be submerged for at least 30 minutes under at least one meter of water. Even frequent, intense thunderstorms aren’t going to do any damage. And if anything does go wrong, you’re protected by a two-year manufacturer’s warranty. If there are defects in materials or labor, you’ll get a full refund or a replacement. 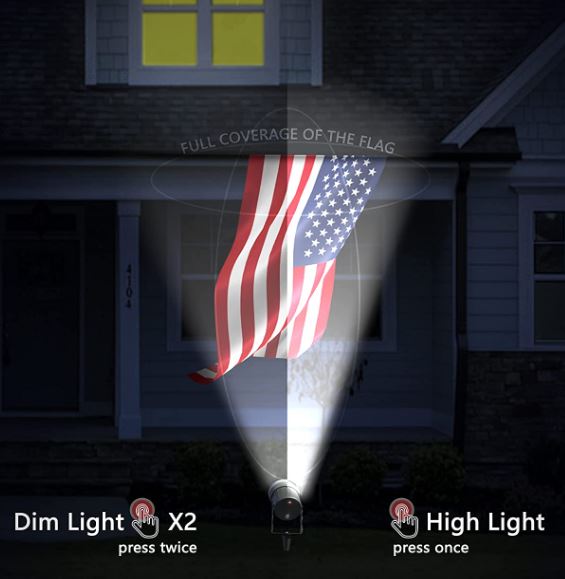 Using a button on the back of the light, you can select between two different brightness levels. There are no official lumen ratings, which is unfortunate. But when mounted halfway up a 25-foot flagpole, the high setting is more than powerful enough. The low setting will be better for shorter flagpoles. 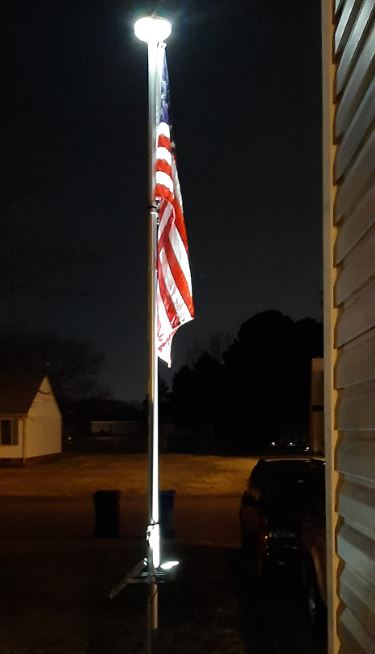 Like the Deneve light, the Ofuray 3-in-1 light is automatic. Once you set it up, it will turn on at dusk and off again at dawn. The 5,200mAh battery is sufficient for about 12 hours of operation on low brightness. At the higher setting, it will run for around eight hours. Depending on your latitude, that may or may not be enough.

If you need an even brighter light that lasts for longer, there are plenty of options. Check out our list of the best white LED outdoor flood lights for inspiration. They’ll need to be plugged in, but you’ll get a major boost in total light output. 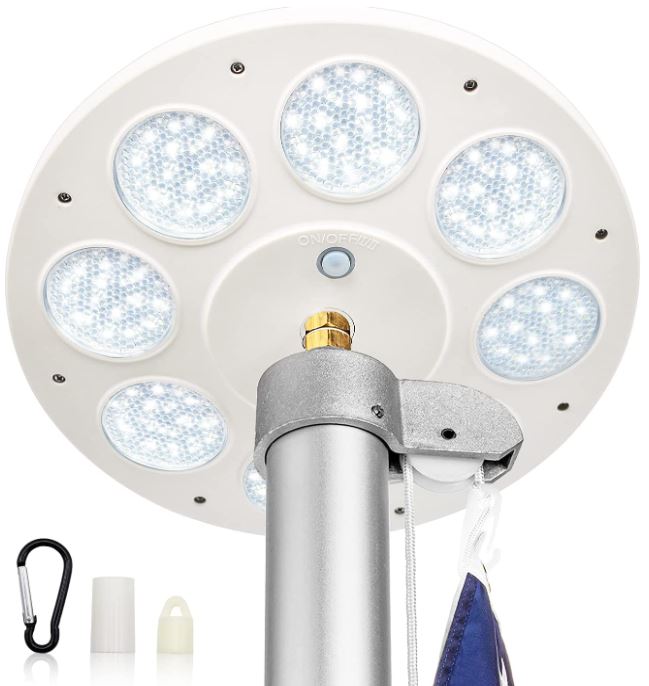 The Parapop Solar Flag Pole Light is another circular light that mounts on the top of your flagpole. It’s disc-shaped, and the white ABS plastic housing has a diameter of 9.45 inches. It’s 1.42 inches thick at the center, and slightly thinner around the perimeter. This creates an outward-facing slope on the bottom, where the LED diodes are located. The result is a wide cast of light that surrounds the top of the flagpole. The solar panel is located on the top, and is invisible from the ground level. 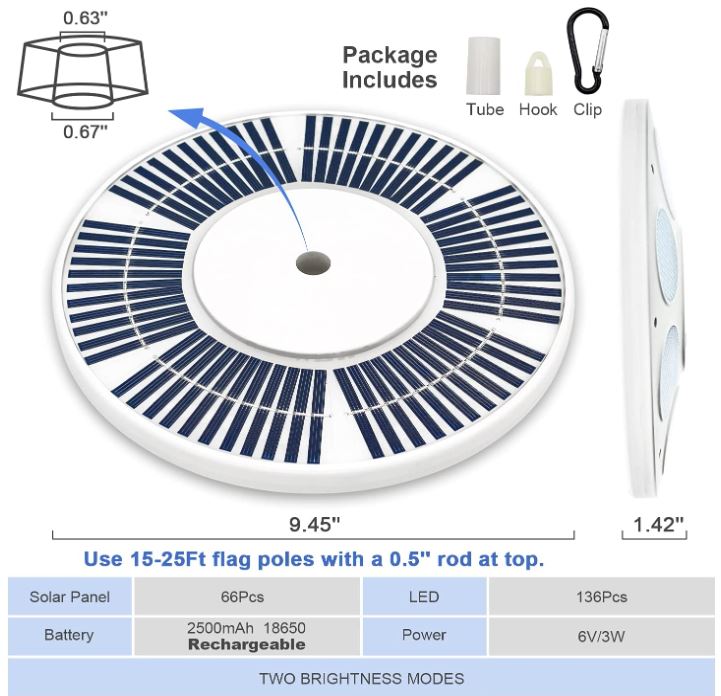 This light is designed to fit a half-inch finial spindle with a length of at least 1.5 inches. Remove your finial, put the light on the spindle, and screw the finial back into place. Before you climb down your ladder, make sure to press the “on/off” button. Otherwise, it won’t operate. Once the button has been pressed, it will work automatically.

The weather-resistance rating of IP65 is reasonably robust. You don’t have to worry about any kind of dust. The light can also withstand any realistic level of rain. In most areas, weather damage is simply not a concern. 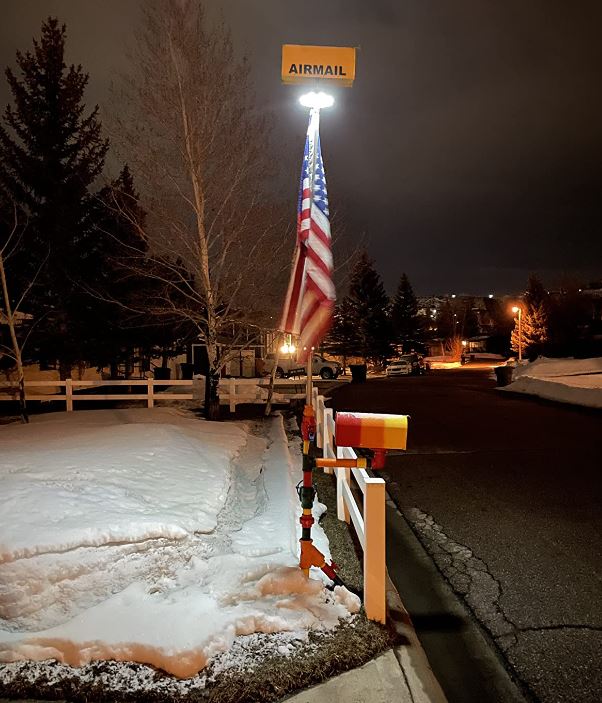 The Parapop solar light has two different brightness levels. At the highest setting, it’s suitable for very large flags. At the dimmer setting, it’s a great choice for smaller flags. 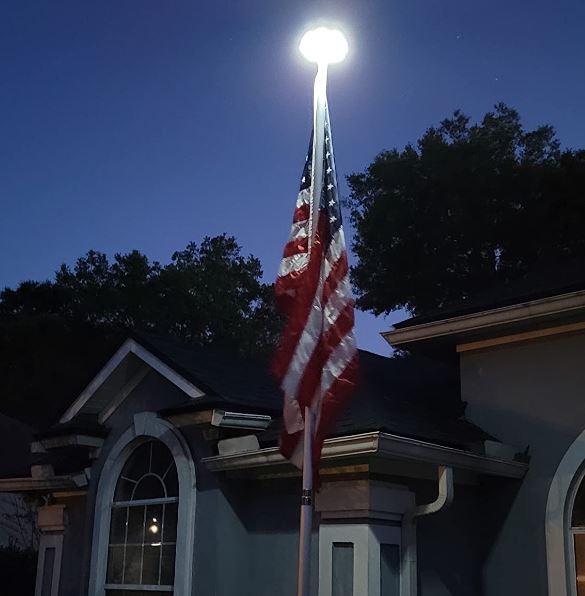 One thing we really liked about this light is the replaceable battery. It uses an 18650 lithium battery, which you can buy at many stores. If the original battery starts to fail, you can just pop in a new one. It has a capacity of 2,500mAh, which will run the light for 10 hours on the low setting. On the higher setting, it will last for around eight hours. 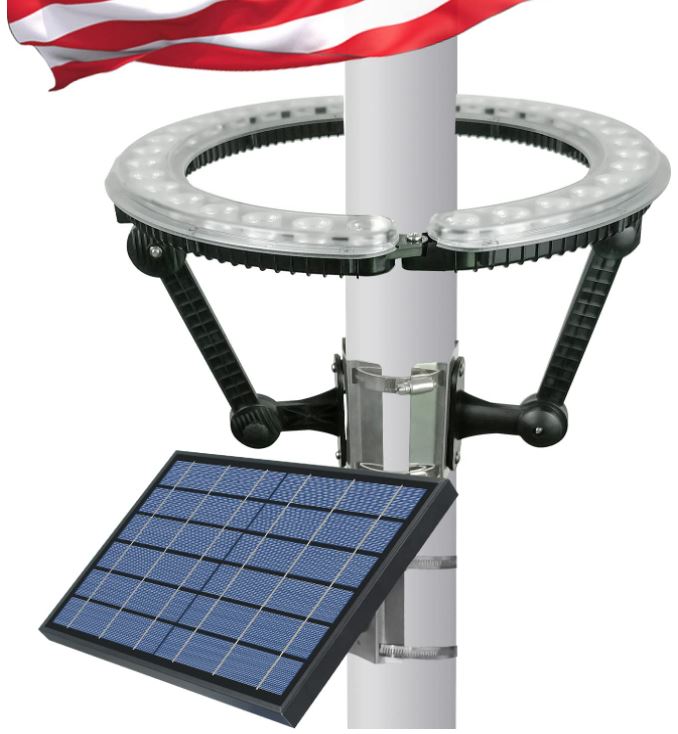 The Kayiune Solar Flag Pole Light is another light ring, but it mounts under your flag, not above it. It’s an ABS plastic circle with a diameter of 14.57 inches that mounts on a bracket around your flagpole. The bracket can fit a 2 to 6-inch flagpole, with a height of up to 40 feet. For smaller poles, you can order half a ring with the same mounting bracket.

The solar panel mounts underneath on a separate bracket. It’s adjustable by 180 degrees, to ensure you get the maximum amount of sun. 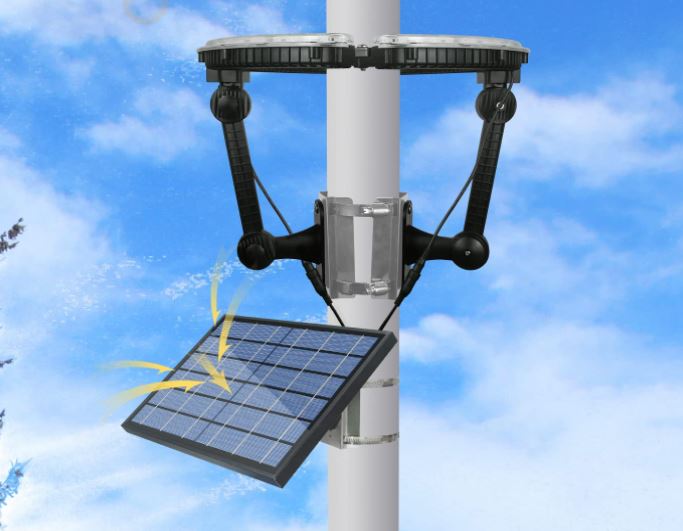 The weather-resistance rating of IP67 is very robust, and keeps your flag lit under any weather conditions. Kayiune backs this with a 12-month manufacturer’s warranty, so you know you’re protected. 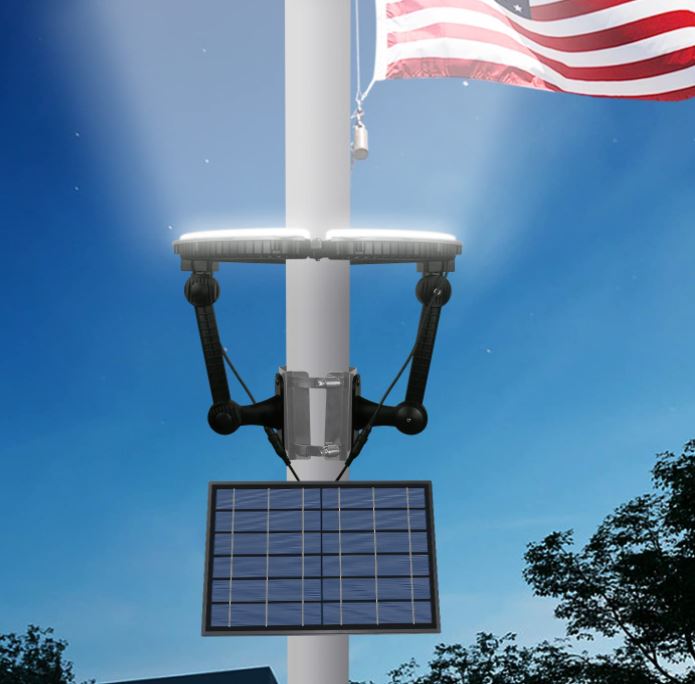 The internal battery on this light has a capacity of 10,000mAh, which is pretty impressive. When it’s fully charged, you can run the light for 16 hours without interruption. The brightness of 4,640 lumens is pretty impressive. Even if you have an oversized flag, you won’t have any issues lighting it up.

If you want some lights with smart features, consider the Novostella Blink. They’re RGB lights, with enough illumination for smaller flagpoles. You can change the colors from a smartphone app, and make your flag lighting seasonal.

All of these solar LED flagpole lights could be the right choice, given the right circumstances. Let’s go over what we’ve learned, so you can decide which one is best for you.

We began by looking at the Deneve Deluxe Solar Flag Pole Light. This is a nifty, disc-shaped light that mounts on the top of your flagpole. It looks like a little UFO riding beneath the finial, and we liked that you can order it in silver or gold. It’s also easy to install, provided you have a tall enough ladder.

Next on our list was the Ofuray 3-in-1 Solar Flag Pole Light. This is a brighter light than the Deneve, and it’s built like a traditional spotlight. The upward-facing design puts more of an emphasis on your flag. And the large solar panel will charge the battery in as little as four hours. Our only concern was the reduced battery life on the brighter setting.

After that, we reviewed the Parapop Solar Flag Pole Light. It’s similar to the Deneve light in many ways, albeit with a shorter battery. On the other hand, it’s adjustable, so you can dim it for use with a smaller flag.

We finished up by examining the Kayiune Solar Flag Pole Light. This light is the ideal choice for very large flags, and works on up to a 40-foot pole. It also has more than enough battery light to meet your needs, and a large solar panel.