Traditional keyboards were designed before ergonomics were a concern. Even the standard QWERTY keyboard layout is a design meant for typewriters not digital typing. Most keyboards are based on old concerns from old technologies and have never really bothered to factor in comfort. This is painfully obvious to everyone that spends more than a few hours at their computer each day. The stress on your muscles and joints builds up slowly. Most people do not even notice when it starts becoming a concern. By the time it becomes clear they are already experiencing a large amount of discomfort.

Ergonomic keyboards have attempted to solve these problems with varying degrees of success. The famous Microsoft Ergonomic Keyboard sometimes forces your hands into awkward positions. That is because of the seemingly random size of specific keys, making them difficult to reach. Even without that specific issue, most ergonomic keyboards only offer a slight improvement on traditional keyboards for alleviating discomfort. With the fixed orientation in their design, it is impossible to customize the experience to match your unique comfort needs.

Split keyboards seem like a strange aberration; however, they do solve most of the ergonomic concerns. They obtain full ergonomic status because you can adjust the typing angle to match your shoulder width. Even without concerns about repetitive stress injuries, split keyboards offer massive enhancements over traditional options.

How to Choose an Ergonomic Gaming Keyboard

Depending on your intended use, you’ll find a range of keyboard options available. Typists tend to use similar keyboards to those used by gamers, but there are always subtle differences. Capitalizing on those differences is the difference between finding a good keyboard and an excellent keyboard.

These differences seem small at first, but when you spend countless hours in contact with your keyboard, they begin to matter. With enough frequency, seemingly minor issues with a keyboard can become serious agitations. Conversely, apparently small improvements can produce a board that feels almost inexplicably better to use.

Membrane keyboards are relatively uncommon on their own. They consist of three layers, with the top layer having the key labels printed on it. The 2nd layer is a “spacer” that keeps the other layers from making contact until you press down a key. Finally, under the spacer, you have the layer with conductive stripes that pair with the top layer. When you press a button it makes the top and bottom layers touch and completes the circuit.

In Dome-switch keyboards, you still have a flat-panel rubbery membrane but with the addition of mechanical switches. The rubber dome switches, also known as polydomes, have an inside bubble coated in graphite. Though they are much more quiet keyboards, they have lower life specifications. Many also find them to be “mushy” because they do not provide positive feedback.

Scissor-switch keyboards are very similar to dome-switch keyboards; however, they utilize two interlocking plastic pieces in a scissor-like design, thus their name. Manufacturers often use scissor-switches on laptops because they are low profile. They can also be difficult to snap back on if you happen to snap them off.

The Kinesis Freestyle Edge RGB’s design removes RSI strain from your forearms. The split design and built-in wrist rest helps boost your endurance while spending long sessions gaming. The thick cushioned wrist pads are also detachable if you decide to use your own or need to save the space. 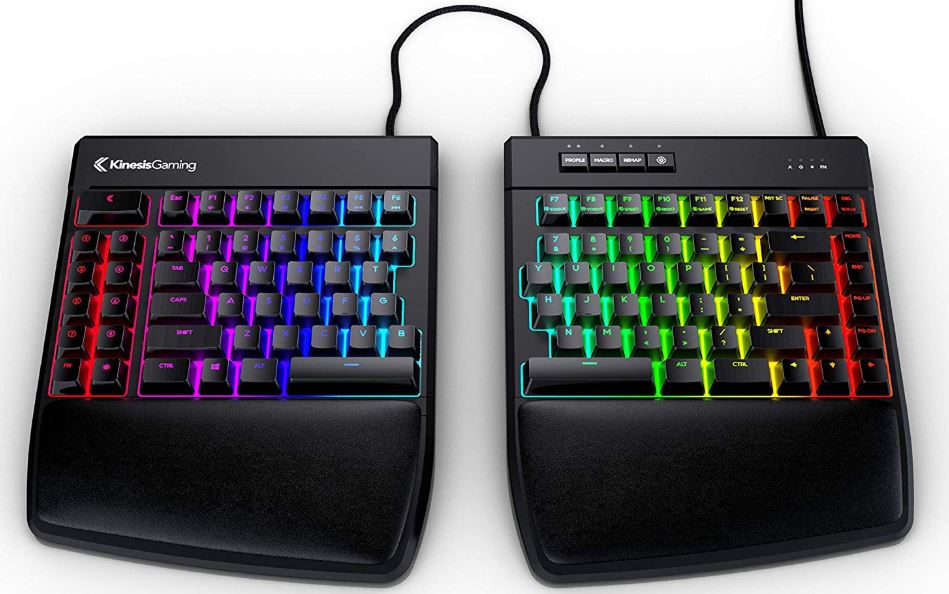 The Freestyle Edge keyboard is very well-built. It’s rated for over 50 million keystrokes, and you can feel the premium quality when you’re using it. The size comes in at 1.25 inches tall, 15.5 inches wide, and 10.25 inches deep and weighs a total of 3 pounds. This is a wired keyboard and utilizes a braided USB cable. You also have the choice between MX Brown switches that have low force but solid tactile feedback, MX Blue that has the most satisfying click with full tactile feedback, and the MX Red with low force and a linear press. 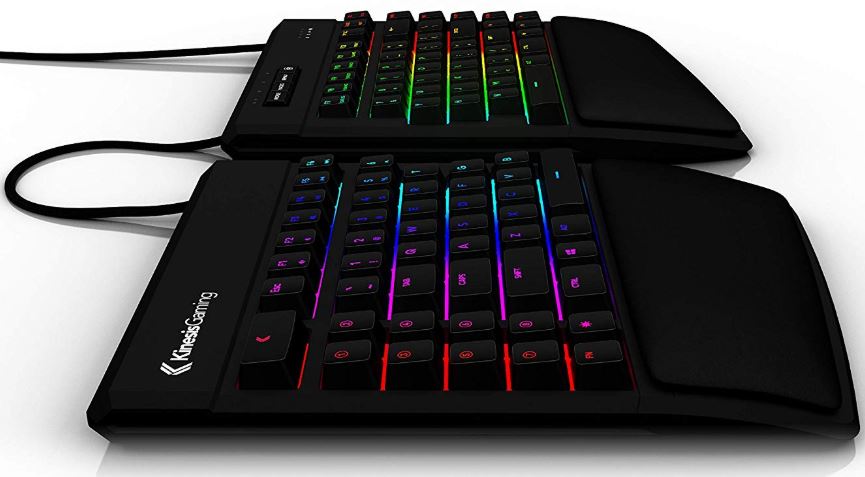 The keyboard is split down the center and can be separated by 20 inches and still function fine. You have your “profile”, “macro”, and “remap” keys at the top and a split spacebar button for smooth interaction with both hands. The available tenting stand allows you to lift the inside of the keyboard to angle toward your hands for increased comfort and performance. It’s clear from every interaction with the Freestyle Edge split keyboard that each engineering decision was meant to maximize quality and performance. The RGB also has pre-configured Dvorak and Colemak layouts which can be set through the Smartset App

Gaming keyboards without macro functions are not real gaming keyboards. With the Kinesis, you have 9 profile macro settings and 4mb onboard memory to ensure you do not lose those settings. That means you can set separate keyboard and macro profiles for different games. You can also configure the keyboard using the SmartSet app. Whether you want to configure unique macro settings or mess with the RGB lighting effects, it’s incredibly easy to do so with the desktop software. For any concerns regarding defects, Kinesis provides a limited 2-year warranty.

The Mistel Barroco split keyboard is a very different design than the previous keyboard. The two halves connect with a coiled Mini USB cable. Committed gamers tend to love their Cherry Red switches due to the actuation, though Mistel opted to offer Cherry MX Black switches for the experience with fast-paced gaming and increased resistance. 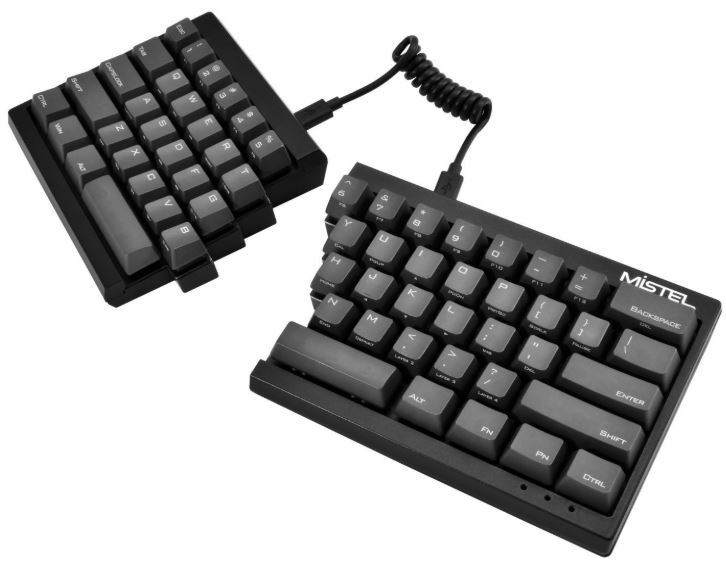 Though if you do have an affinity for MX Red, or MX Clear, you can get this mechanical keyboard with those switches instead. The MX Clear switches are an enhanced version of the classic MX Brown, but with a more pronounced operating force for additional tactile feedback, so you get a very satisfying click while you type.

Another exciting element to the Mistel Baracco is that every single key is programmable for use with a macro. They also have three built-in preset layouts, including QWERTY, Dvorak, and Colemak, so whether you’re gaming or programming, you can opt for the most efficient layout. 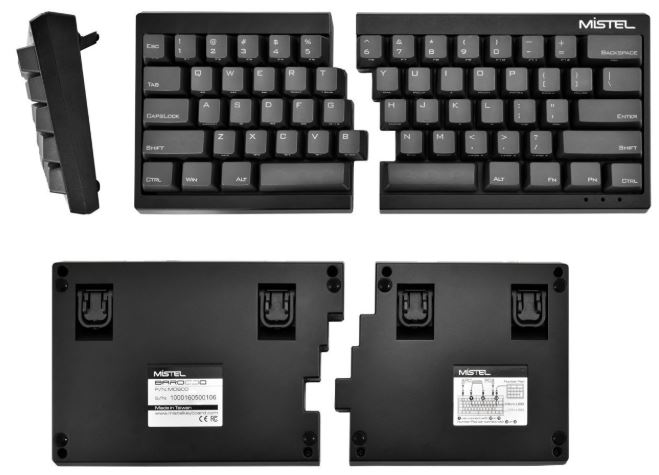 The Mistel Barocco keyboard looks like you broke a standard keyboard in half, and it snapped along the key borders. The two halves fit together like a puzzle piece, which helps reduce one side from sliding away from the other. Coming in at 1.54 inches tall, 11.61 inches wide, and 4.88 inches deep, it’s a much lower profile keyboard. It also weighs about half as much as the Freestyle Edge did, coming in at only 1.48 pounds. The compact design makes this a very portable keyboard. So if you tend to travel often, the lower impact on your luggage space is great. 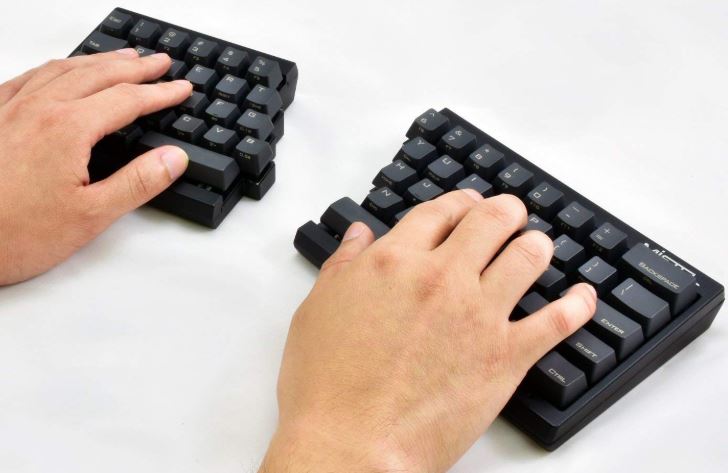 This keyboard also has a num-pad option that you can use with the split keyboard to get a bit more our of the set. Though separated num-pads are nothing new, it does get a bit out of control when you now have to deal with three unconnected devices that all operate as a single keyboard. Unlike the Freestyle Edge keyboard, the Mistel Barocco does not have LED-backlit keys. Though that is a purely aesthetic functionality, having the LED keys definitely makes your setup ready for photo-worthy bragging. The Mistel Baracco keyboard is not as aesthetically pleasing as some other options. But, it’s stacked full of powerful features that make it a great option for the more practical-minded.

We are stepping back into the realm of Kinesis for a bit to talk about the Freestyle Pro. There are a lot of similar features here but also some essential differences that need to be discussed. 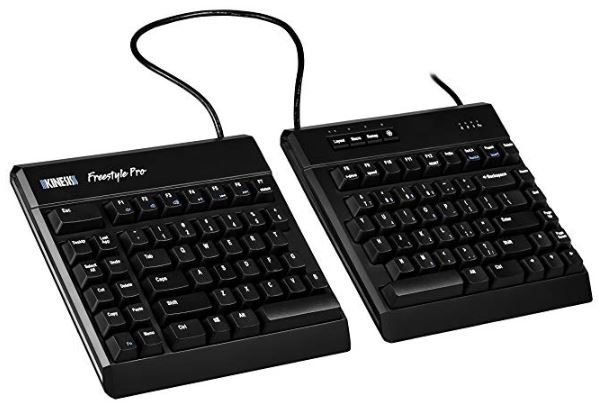 To start, the Freestyle Pro does not have backlighting like the Edge. Palm support is not an included feature but you can purchase the wrist rest separately. The Edge has premium braided cables, and the Pro has standard cables. The Pro has an advantage over the Edge with it’s included Mac Keycaps. Though the Edge has Mac compatibility, the included Mac Keycaps on the Pro make it a nudge better for mac users. However, if you need Mac Keycaps for the Edge RGB, they’re available through their website. 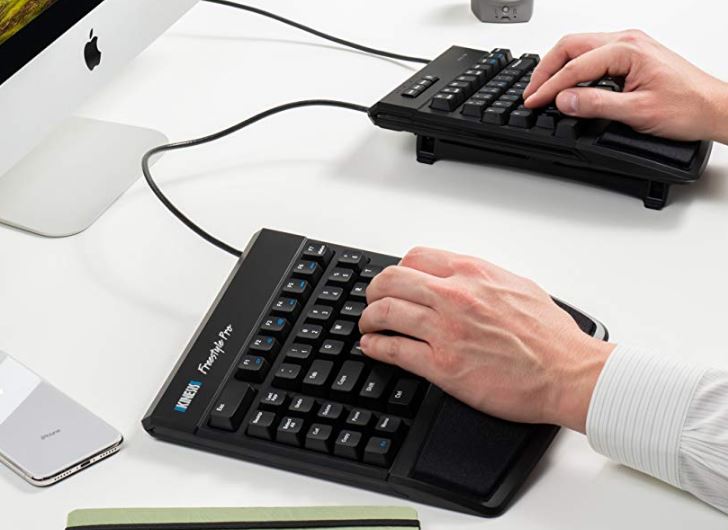 The build quality on the Freestyle Pro is top-notch. With the cherry MX ‘quiet’ Red switches, this keyboard is designed for use in a professional environment. You still get the full tactile feedback without driving anyone around you crazy with the constant clicking that a lot of other mechanical keyboards tend to do. Without the optional wrist rests, the Pro comes in at 1.25 inches tall, 15.5 inches wide, and 1.75 inches deep. Similar to the Edge, the Pro has an option for a lift kit for the tenting function made for increased comfort. Pay attention to the accessory you purchase because the V3 Pro has the tenting function without palm support. If you want tenting with palm support you must get the VIP3 Pro. 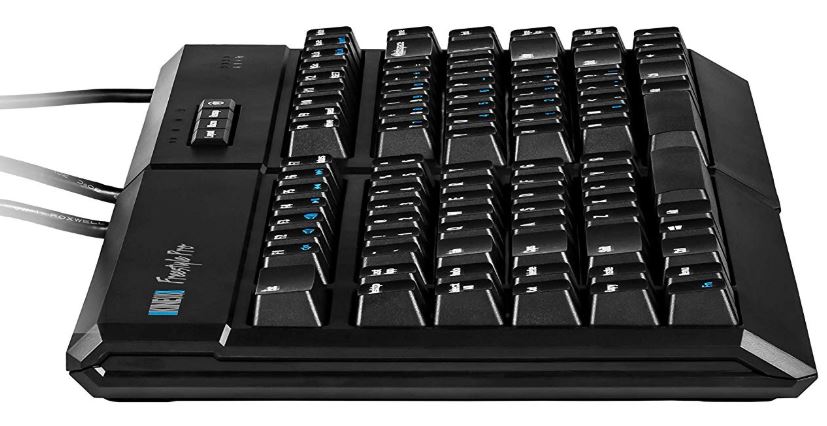 With the driverless “SmartSet Engine” software, you expand the functionality of the keyboard and get full programmability. It also has a built-in four megabytes of flash memory for your keymap settings to store locally, so they remain with you even if you move to a different computer. You also get full compatibility with Mac OS X, Linux, Chrome, and Windows 7-10.

All three of these keyboards have some great qualities, and you would be well off getting any one of them. That said, some of them excel at certain things more than the others, and since this is a review looking for the ultimate ergonomic split gaming keyboards, those differences are significant when making your final decision.

The Kinesis Freestyle Edge RGB was explicitly created with gaming in mind. It’s a higher profile keyboard that takes a bit more desk space than the other options. Even so, every inch of it’s engineered to help gamers achieve optimal performance. With features like a fully customizable keyboard mapping, to the aesthetic RGB design, it appeals to gamers and enthusiasts alike.

The Mistel Barocco is the most feature robust keyboard and seems to have been designed with professionals in mind, with a focus on programmers. Because of the raw flexibility in the programmability of the Barocco, it’s ideal for gamers and heavy-duty professionals alike. The design is lackluster but it’s a top-notch keyboard with more feature options than you will likely use. If you do integrate its powerful features into your play it steps up your gaming performance.

The Kinesis Freestyle Pro has the least features of the three keyboards reviewed. It’s an excellent keyboard in its own right but it doesn’t measure up to the Barocco and Edge. It’s essentially a model down from the Edge and thus cannot compete. The only individual that might consider the Pro over the other two options is a Mac heavy user. This is due to the keycaps designed for Mac functions.

That said, if an aesthetic appeal is essential, then the Freestyle Edge RGB is an incredible option. It has a design and feature set that gives you an ‘Edge’ over the competition. However, if you do not mind a lackluster aesthetic, then the Mistel Barocco is a great choice in terms of raw performance and features. Either way, you will be well off and ready to go on a winning streak.