GPS trackers can be hidden anywhere. Think about a car. Trackers could be stuffed under the front dash, inside a speaker, under dash fabric, inside the bumper, inside tire wells, behind brake lights, and so on. That’s really just the tip of the iceberg. A well-hidden tracker can be all but impossible to find without extreme measures.

When it comes to hidden cameras, it’s basically the same story. Cameras can be made small enough to be placed virtually anywhere. Finding one without any tools to help is like searching for a needle in a haystack. You could literally start smashing walls and tearing-up carpet, and there’s a good chance you would still miss a well-hidden camera.

If you’re concerned with corporate espionage, or otherwise have reason to believe you could be bugged, there are some fairly simple ways to find out the truth of things. Counter surveillance equipment can dig up even the best hidden bugs because electronics leave footprints in their wake. Because they help you know exactly what to look for, digging up bugs becomes as easy as using a metal detector. 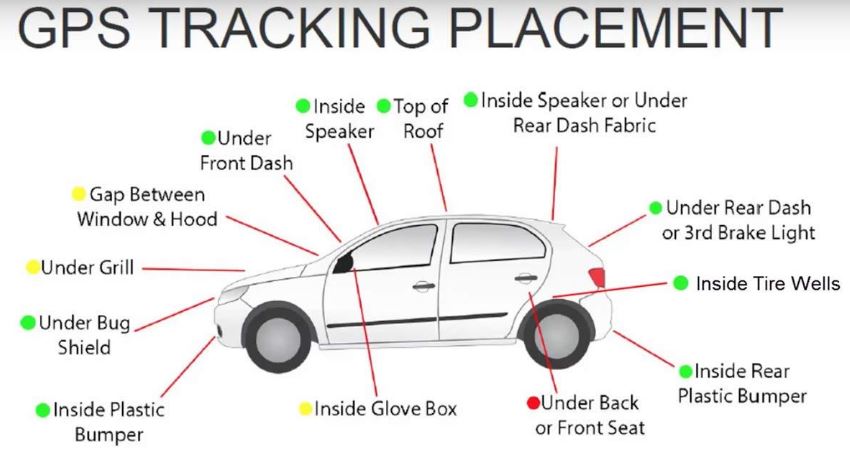 There’s about half a dozen things you have to keep in mind when choosing the right detector. Basically, your selection is about ensuring the tracker can do everything you need. That can be rolled up into five categories:

If they can search for both bugs and cameras, they’re often less efficient than trackers specific to one task. Trackers can become fairly expensive when you expect top-quality performance in every category, which is one of many reasons why it’s helpful to know what kind of bugs you’re searching to find.

If you have to use the tracker in a discreet manner, it helps if the tracker looks discreet. In the most superficial sense that means it isn’t bright red and full of flashing lights. In a more pragmatic sense, you might look for discretion-based features, like the ability to turn off noise notifications and disable LEDs.

Discretion and portability interconnect. But let’s face it, there’s not much point to having a bug-tracker that you can’t carry around. That’s especially true if you’re looking for bugs in some general area, but don’t have any good leads on precisely where it might be. For example, finding a GPS tracker inside a vehicle.

How far can the tracker’s detection reach? Entry-level trackers tend to fail when it comes to detection range. If the tracker can only see 10-feet in front of you, then you’re going to be at risk of missing bugs. If nothing else, you’ll certainly have to work much harder to track anything. Any decent tracker should be able to provide you at least 30-feet of scanning distance, with some of the best providing nearly twice that.

People drop things all the time. It’s why cellphone repair is a billion-dollar industry. When you’re using a handheld instrument, like a counter surveillance GPS tracker & hidden camera detector, you’re going to want to think about durability.

What happens if you drop the tracker to the ground? Are there any carrying straps or protective cases you can use? This is particularly important if you’re selecting a higher quality instrument which you expect to last. An aluminum core is preferable, though the majority of trackers are built from hardened ABS plastic.

The DefConPRO Sweep was made to pick up signals from telephone transmitters, wiretaps, and GPS trackers. It’s a multi-purpose bug sweeper intent on being an all-in-one solution to these types of security problems. Though its aesthetic might be a turn-off for some people, the DefConPRO Sweep excels as a bug tracker in nearly every way. Its performance is especially good compared to similar multi-function trackers.

The DefConPRO Sweep DD801 measures 9.4 x 7.6 x 1.9-inches, and weighs just over one pound. Most counter surveillance GPS trackers and hidden camera detectors tend to look pretty similar. But the DD801 looks rather distinct, using a brown chassis that reassembles a workshop instrument more than a law enforcement tool.

In addition to how the Sweep may look less suspicious than other bug trackers, it’s also pretty easy to operate in a discreet manner. You only have to use a single thumb to operate the console. At a glance, and with the antenna extended, the Sweep comes close to resembling a radio. It even has a headphone jack.

The DefConPRO Sweep DD801 is actually among the bestselling portable unit of this kind. In addition to finding GPS trackers, hidden cameras, and phone line taps, includes a white noise generator that can create a shield of privacy as you scan.

The Sweep picks up RF frequencies in the 10GHz range, which is considered law enforcement grade detection. Just about the only detection devices which are more sophisticated are scientific instruments. In other words, the Sweep is capable of picking up far more signals than essentially any of its less advanced competitors. Especially for trackers in a slightly lower price range, which tend to typically cut-out around 6GHz, making them inadequate for detecting some types of modern equipment.

Additionally, the DefConPRO Sweep includes a pair of sensitive headphones intended to help you locate the bug with precision. Once they’re plugged into the headphone jack, the bug tracker really does come close to passing as an old radio.

The Spy-MAX Law-Grade ProMax is more or less what it sounds like. It’s a law-grade detection unit made specifically for identifying GPS trackers. And the way it works is rather simple.

GPS trackers make use of cell signals to broadcast their location to the rest of the world. The GPS tracker basically observes the strength of the signal to help you hone-in on its source. That allowing the Spy-MAX Law-Grade ProMax to detect all variety of GPS trackers, from 2G to 4G connections.

The ProMax measures 4.6 x 2.8 x 1.3-inches, and weighs just short of one pound. Its laser grade tracking mechanism is capable of both standby and idle registration detection. As you’re seeking out transmitters, the tracker will beep or vibrate to give you clues about the proximity. You can switch between either or both settings, depending on how discreet you need to be.

The only buttons you need to handle are on the left side of the unit, which are labeled with simple + and – icons. Furthermore, the generally durable build gives you a good idea about the power of the hardware inside. From the moment you flip the Spy-Max Law-Grade ProMax on, you can start to scan passing vehicles within seconds. And when you’re on foot, it’s possible to find illegal transmitters or trackers in minutes instead of days.

Along the topside, an antenna can be extended about five inches above the device, helping improve signal detection. It really does make a drastic difference if you pull out the antenna, especially if you’re trying to take advantage of the maximum range of the Spy-MAX Law-Grade ProMax.

Turning to its control panel, you’ll find eight LEDs across the display. Each gives the user close insight into the strength and type of signal being tracked. As if the two-button interface were not intuitive enough, every icon on the interface is thoroughly labeled, so even novice users can begin to competently use the Law-Grade ProMax in only a couple of seconds.

Like most similar trackers, the Spy-MAX ProMax is powered with the help of four AAA batteries. It doesn’t chew through the batteries terribly quickly because the device is really just searching for a signal, and powering a few small LEDs. But with regular use, you might end up replacing those batteries every six weeks.

The ProMax and its expansive powers ought to have no problem detecting 5G connections. But it’s not totally accurate to say this detector is prepared for 5G because its LED interface will register those connections as 4G instead. 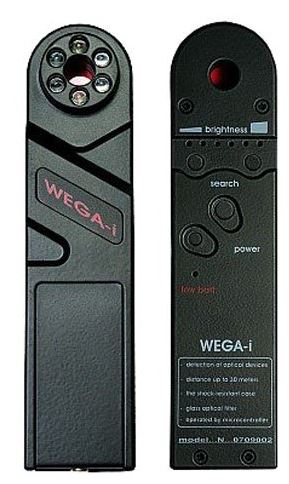 And this advanced combination of techniques allows it to reach a total detection radius of about 60 feet. You really don’t have to search hard or long when you’ve got that kind of power.

The Laser PRO Video Camera Finder measures 5.5 x 1.25 x 0.50-inches, making it essentially the size of a handheld wand. It weighs just over half a pound, so it’s fairly lightweight as well. Though it’s lightweight, it’s actually constructed from a durable metal case. The casing includes a battery indicator light, and an adjustable brightness option.

Using the Spy-MAX Laser PRO Video Camera Finder is quite easy, precisely because of that adjustable brightness graph indicator. At the top of the remote is a glowing red sensor. Beneath that, a series of LEDs to help you guide your search for the camera. The entire console only requires you to deal with four buttons, so there’s very little room for error during operation.

The Spy-MAX Laser PRO Video Camera Finder comes with a couple of handy eBooks. They include Stop Spying on Me and Stop Wire Tapping, and Prevent Spying on your Business. Neither book is particularly insightful to someone who’s familiar with either topic. But they might be able to help someone discover security holes in their system, so they’re worth a glance if you’re not knowledgeable about these issues.

The discharge indicator gives you a good idea of how much time you’ve got left before you need to swap the batteries, but it’s easy to overlook because you don’t have to swap the batteries very often. The Laser Pro is powered by two AAA batteries. Two batteries are included, as well as a cleaning cloth, user manual, and a small screwdriver that can be used to access the battery panel.

The Spy-MAX Law-Grade ProMax GPS Tracker is highly approachable. Using the instrument is about as easy as holding it. Though it’s exclusive to GPS tracking, its performance reflects that reality. You’ll have no trouble finding GPS trackers, wherever they might be hiding. Just about anyone concerned about finding GPS trackers will love what the ProMax can do.

The DefConPRO Sweep can search for cameras, GPS trackers, phone taps, and essentially any bug that doesn’t have eight legs. Using such a wide set of frequency detection features, the DefConPRO is ideal for a general sweep of bugs. That makes it a good choice for someone with nonspecific bug concerns, like those who may be concerned about eventually becoming the victim of corporate espionage.

Spy-MAX’s Laser PRO Video Camera Finder is a top-of-the-line instrument for detecting video cameras. It might not be totally impossible to beat this detector, but you’re certain to detect virtually all cameras in virtually all circumstances. True to its intentions, this is precisely the kind of instrument you’d see used by law enforcement. If you’re searching specifically for cameras, you can scarcely do better than the Spy-MAX Laser PRO Video Camera Finder.